The model aircraft easier… Bought a compression motor, collected from reechek Yes nervures wing, planed boards from lime simplest fuselage and fly the model! And this is the simplest aircraft will be in principle the same as control line aerobatic acrobat experienced athlete. Another thing — avtomodelisty… Even the most simple of our “shells” contain chiseled, sanded, milled, hardened, normalized, machined, planed, moulded, blue, chrome, vulcanized etc. details to make that possible only by using modern high-precision equipment. How to organize with the mass boys! Once rescued us, heads of circles, sets of parcel Temp. However, their basis virtually did not leave the club room for creativity.

When in the “M-K” appeared so-called “Vyatka” — kordovye performance of the original scheme, simple and at the same time modern in essence, the complex is embedded in their design ideas — and we tried to design a few variants of models for such a scheme. They began to of the guys involved in the first or second year, the same as training kordovye for model airplanes.
We did in the circle kordovye the car under the engines of 1.5 cm3, 2.5 cm3 , and 5.0 cm3. Moreover, by construction, all three are almost identical — the only difference was in size. I want to offer to your attention one of these developments is a simple one, under the engine MK-17 “Junior”. Accordingly, the name she got — “Vyatka-Junior”.
The choice we stopped on the asymmetric scheme by completing the however, the basic requirement of the rules of the competition: our model is four-wheeled, and the wheels it is located at the corners of isosceles trapezoids. The front wheels directly mounted on motor shaft. The hub (on it are mounted two cut from a sheet of rubber tires) machined from aluminum alloy D16T. This is one of the few chiseled details of our model, process it is possible on any lathe, even the school or Board. Mount the “tires” on the hub — using two washers-discs, and each is fixed with six screws with thread M3. 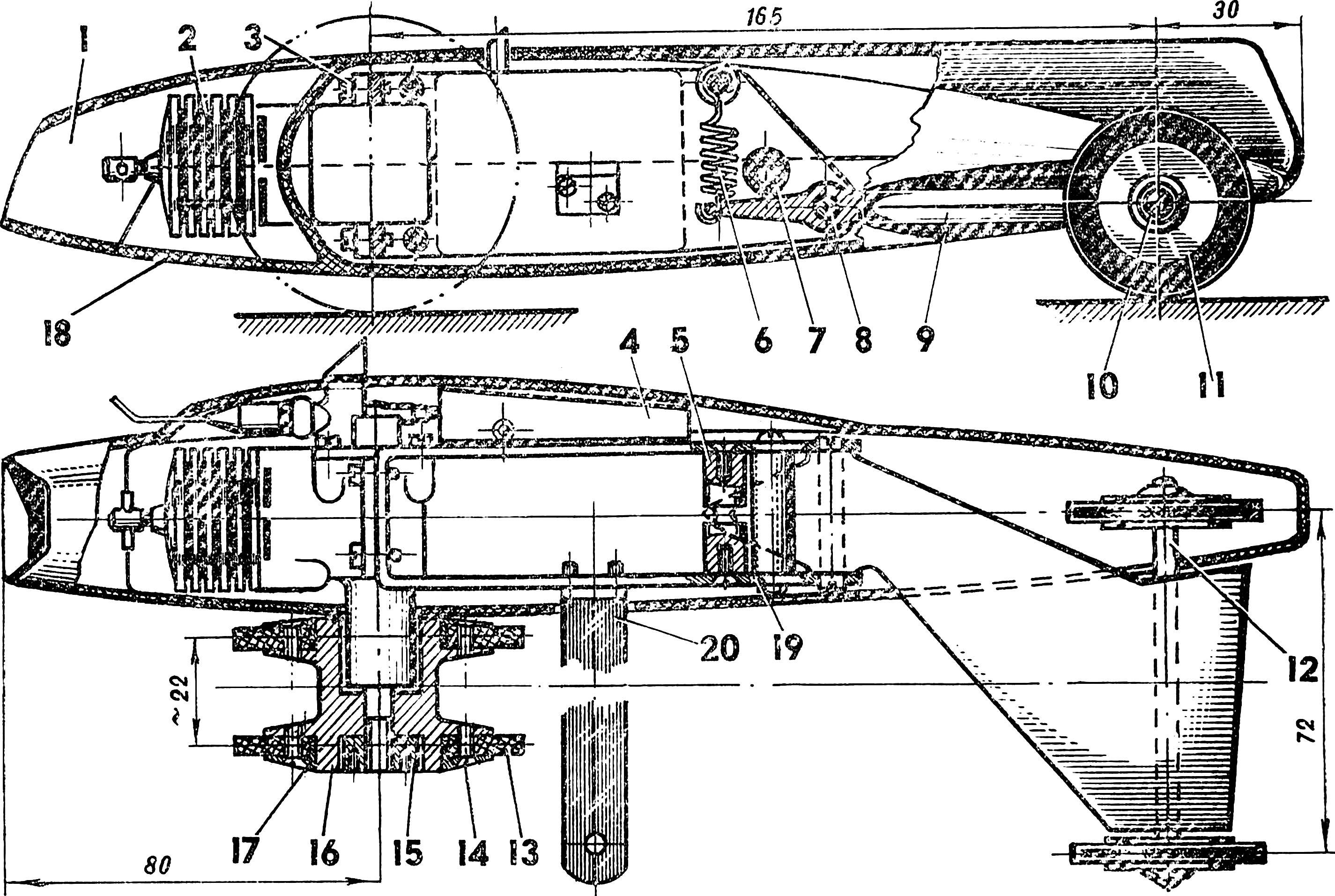 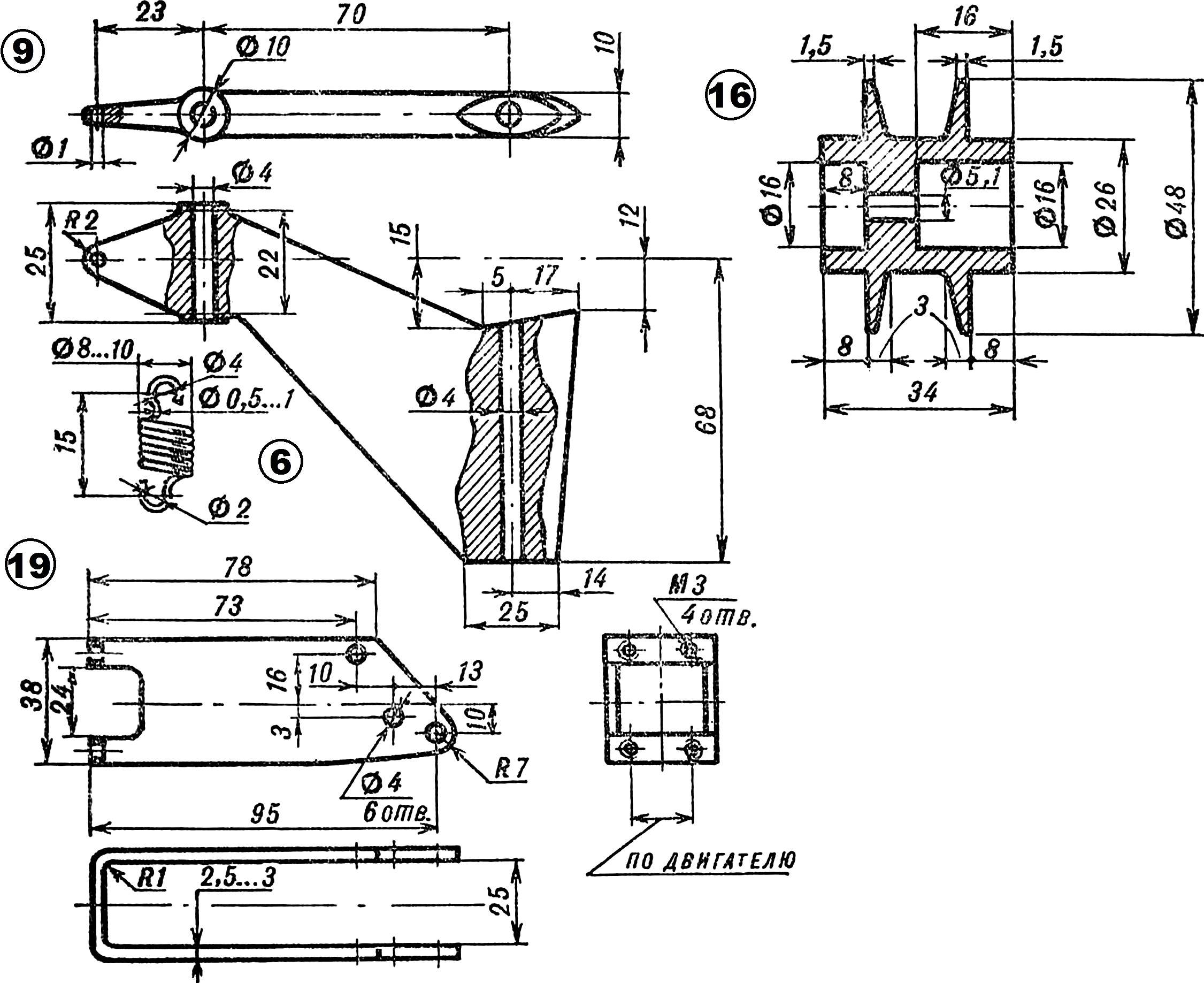 Racing the car with the engine class 1.5 cm3:
1 — the upper part of the body (Vileika of a fabric and epoxy resin, shell thickness 2.5 mm), 2 — compression Microdrive MK-17 “Junior”, 3 — screws M3 engine mounts, 4 — fuel tank (tinplate thickness 0.3 mm) 5 threaded sleeve, 6 — spring suspension rear axle, 7 — bump stop (rubber bushing and the bolt with M4 thread), 8 — axis arm rear suspension, 9 — lever rear suspension (D16T), 10 — screw-retainer, rear wheel 11 — rear wheel 12 — rear wheels axle, 13 “tire” front wheels (rubber sheet with a thickness of 5 mm), 14 — M3 screw mount front wheel, 15 — mounting nut front wheel hubs, 16 — hub front wheel (steel), 17 — disc front wheels (aluminum), 18 — the lower part of the body, 19 — the frame (steel sheet thickness 2.5 mm), 20 — cord strap.
The base (or frame) “Vyatka-Junior”, which is fixed and the engine MK-17 and rear axle, arched sheet metal — aluminum or steel. As experience has shown, do better on the mandrel, made of aluminum with a thickness of about 2.5 mm. the Groove under the engine crankcase should be vypalovaci after bending of the workpiece and final processing. Then serverlists holes axle rear suspension, bump and other.
Rear suspension — longitudinally oscillating the lever, an elastic element of the suspension — tension helical coil spring. Stiffness it (outside diameter and wire diameter) is selected empirically, depending on the speed of motion of the model, its weight and finish of the track. To limit the return stroke of the arm is a bump — eccentric rubber bushing fixed on the shaft of the bolt with M4 thread. This form of bump allows you to easily adjust suspension stiffness and ground clearance. 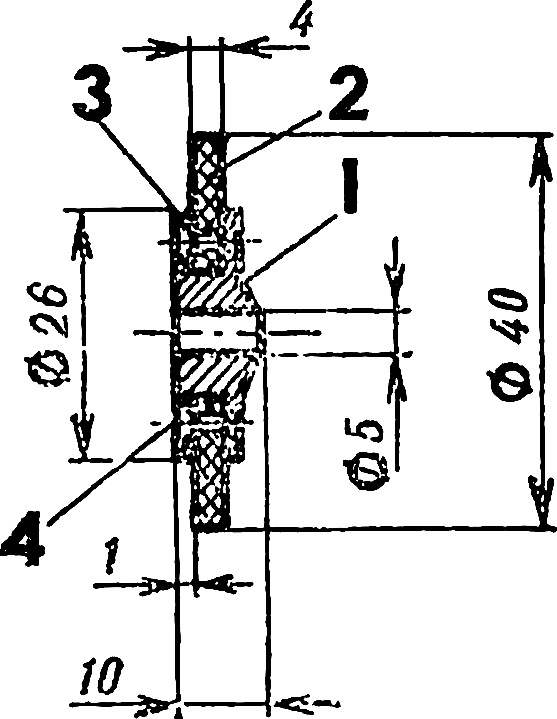 The rear wheel of the car:
1 — hub, 2 — rubber “tire” 3 — washer, 4 — tubular rivet.
Lever rear suspension is sawn from a sheet of aluminum with a thickness of 10 mm. When drilling holes under the axle of the rear wheels and the axis of rotation of the lever necessary to ensure alignment, this operation is performed on a drilling machine in a single clamping position.
Fuel tank — single chamber liquid dispenser, which ensures the stability of the engine at the track. The material is tinplate, with a capacity of about 20 ml. Tank is attached to the cheek frame with epoxy glue.
A stopping device is a conventional — type spring-loaded wire “whisker”, moving, pinched fuel line.
The body of the car is laminated of fabric on the epoxy. Vileika — on paraffin wax blank. After the final curing of the resin paraffin vytaplivaete in boiling water, and the body shell is neatly cut into two parts — upper and lower. Inside the case is glued in baffle — baffle the exhaust gases and the plywood cheeks, allowing tight to put the lower part of the body on the frame. Both parts of the housing are attracted to the frame with M3 screws.
Cord strap — steel, it is bolted to the frame with screws with M4 thread.
To run the model because of its special configuration is used not the usual start-stock; aluminum tube at the end of which is seated a plug with two clips. Athlete abuts the rollers in the hub of the front wheels, without loading the crankshaft of the engine. To start-the rod is mounted also an emphasis, presses to treadmill rear part of the model.
As already mentioned, the model type “Vyatka-Junior” leave a wide space for creativity in their design and manufacture. In our circle it was tested several types of rear suspension: with rubber shock absorbers, with coil springs working in compression, with flat plate springs and the like. Tested various options rear axles, we tried the scheme and with the leading of the rear wheels… it Should be noted that this work was a great school for our avtomodelistov allowed them to clear and specific examples to verify the advantages and disadvantages of various plans car.
R. OGARKOV, the master of sports of the USSR