The first time I saw this unusual rocket in 2007 in the championship of Russia in Orel. At the start of class models Ѕ4А my attention was drawn to the flight of the rocket glider container type. From the start of the Protocol we learned the name of its designer — Sasha Scoops from the team of the Krasnodar territory and the flight time is maximum (3 minutes). Just wanted to meet the designer, but in the starting area he appeared and after the second round. But the Protocol after the red number “180” was listed a “0”.
After some time, this metamorphosis was solved by me. “Fly” well in the first round on the “main” model, Sasha tried to find for start-UPS in subsequent rounds. And this search was very long, but, unfortunately, the model (well-established) couldn’t find. I must admit that his other sports “shells” at the time, needed to be fine — they flew more unstable. In the end of the competition hope the designer did not come true, busy place — in the second ten.
My offer to talk to Sasha reacted with interest. Apparently, it was the desire of some “rehabilitation” in the failed starts.
Lives and studies Sasha Scoops today for the 11th grade of Slavyansk, Krasnodar region.
With eight years of experience in modeling, and then — and rocket modeling with the wonderful teacher Anatoly Ivanovich Resin — one of the few existing today veterans additional education in Russia. Here it should be noted that Krasnodar Krai is one of the pioneers of rocket and space modeling in our country. A lot of work in this region is carried out today. Here lived and worked the designer of the first flying engine Evgeny Leonidovich Books. Here to this day working trainer-teacher Oleg Petrovich Good, and raised many prize-winners of European and world Championships.
His first flying model aircraft he has built, studying in second grade. A year later, he was fascinated by model rockets. In 2005, his ideas were realized in a new and interesting model of the rocket plane unusual design with a folding wing and tail feathers. In the same year he became the bronze prize-winner of superiority of Russia on sports flying, and in 2007 took first place at regional competitions.
Today Sasha successfully finishing the 11th grade, with the mood, makes model rockets, and in my dreams sees himself as a designer of these missiles. I want to believe that the child is his passion will become the first step into the profession of a structural engineer.
The proposed model of the rocket plane — a vivid example of the creative Union of the thoughtful educator and an inquisitive males. I want to mention that all that time (over 30 years) know Anatoly Ivanovich, he was always different from the true, the search for a new sports missile and space design.
At first glance, the rocket class ЅА4 may seem primitive. But the ideas implemented in it, deserve attention. And, in my opinion, will be interesting to rakatomalala.
This model belongs to raketoplana container type. Its planning part is a miniature folding aircraft for take-off fit in a medium (container).
Rake-the fuselage is a conical tube made of CFRP with the largest diameter of 4 mm and a length of 304 mm excluding the thickness of the frame. For her, the author has adapted an ordinary whip (the subtle level) from a foldable fishing rod. The front part (large diameter) glued it in the frame of the head fairing. He is also conical in shape, glued together from thin pressshpana (electrical Board), bow part (“crown”) is carved from basswood. Landing skirt width of 20 mm and 31 mm in diameter also made of presspan and connected to the payload fairing through the frame cut from plywood with a thickness of 1.5 mm, to facilitate it randomly drilled seven holes. The connection of the rod fuselage and bulkhead is reinforced with a scarf. Glued to the last container of the rescue system media paper tube diameter of 9 mm and a length of 20 mm. 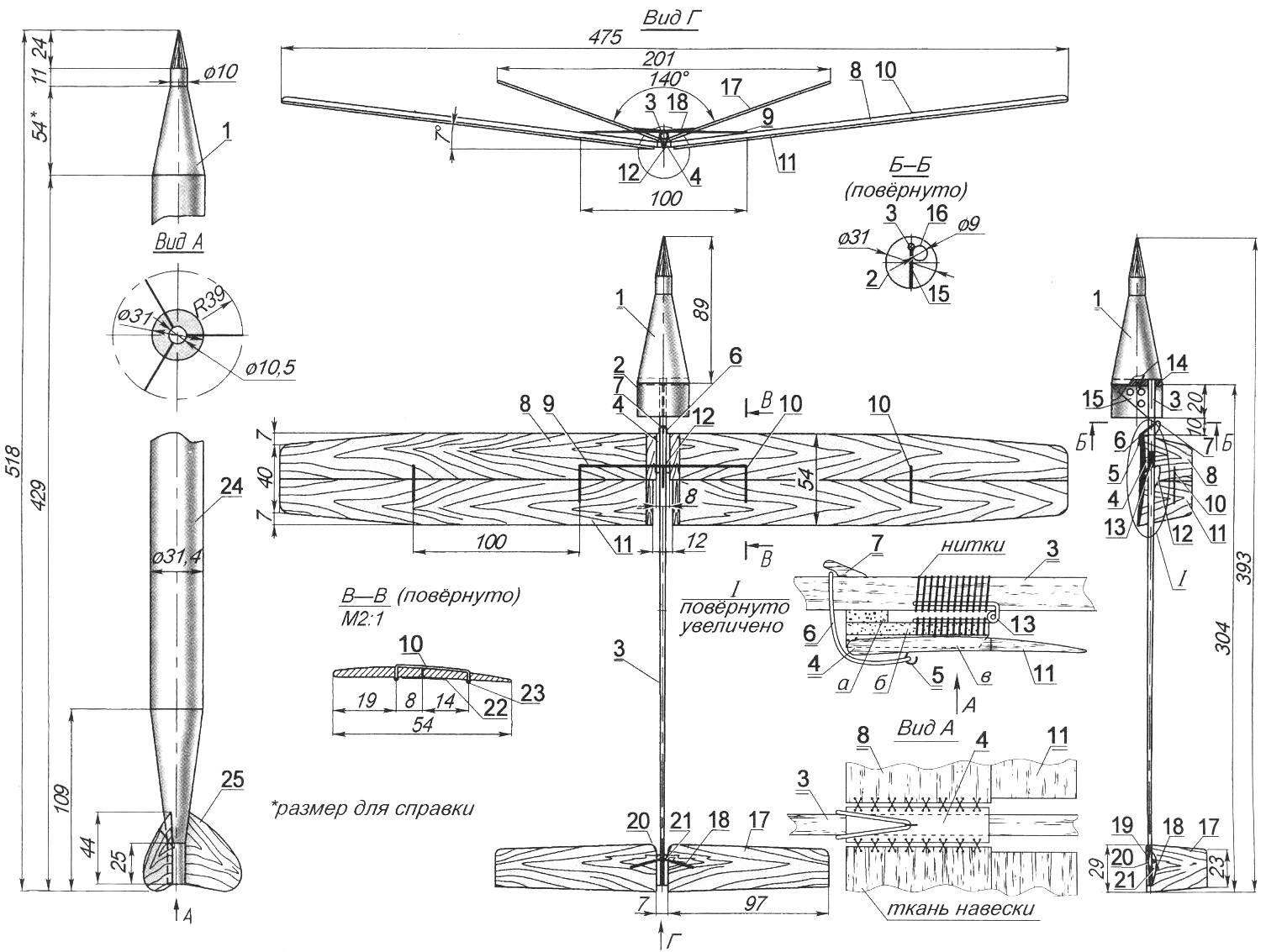 Model rocket modeling class Ѕ4А A. Shovels:
1—fairing; 2—”boarding” skirt; 3—rack-fuselage; 4 — mounting the wing Board (composed of elements a, b, C); 5 —rack; 6—elastic installation of the wing; 7—emphasis; 8—front wing; 9—band disclosures of the wing (angle of “V”); 10—elastic elements of the disclosure the wing; 11 —a folding (rear) part of the wing; 12—emphasis gum of disclosure; 13—jointed, the unit rotation of the wing; 14—the frame of the head fairing; 15 — solitaire of gain; 16 — container recovery system media; 17—tail; 18—gum disclosing tail; 19—hinge joint of the tail; 20 — mounting fee tail; 21 —the emphasis of the gum of the disclosure of the tail; 22—a strip of cloth; 23 — stud-lock; 24—the body of the carrier; 25 stabilizer carrier
Wing — in a rectangular shape with a trapezoidal wingtips. Made of balsa plate with a thickness of 3 mm and a length of 500 mm. wing Profile is PLANO-convex. It is set when processing of the entire plate with sandpaper, glued to the bar. After that, the wing is covered with two layers of nitrocellulose lacquer and cut into two halves (console), which, in turn, cut lengthwise into two equal parts. The incision site slightly Proskuriv, setting a small angle when the compound is treated with a nitrocellulose lacquer and connect the hinge, pasting along the underside of the strips of nylon fabric with a width of 12 mm. This is set some profile curvature (concavity). In both halves of the console, drill two holes with a diameter of 2 mm, departing from the fold line, respectively, 8 mm and 14 mm. they put the double bands of the disclosure the wing and its elements (the hat elastic with a diameter of 1 mm) that hold the bottom pin of wire or bamboo.
Connect the wing in one piece by means of mounting Board, cut out of plywood sizes 8×23 mm and thickness 2 mm. from the Top it is attached to the hinged joint (13) of the wing. It consists of a U-shaped loop of the six coils of steel wire 0.8 mm diameter open end with a length of 12 mm and an axis, inserted into the loop and the bent U-shaped. The ends of the axis length of 14 mm wrapped with thread, coat with epoxy and glued to the mounting Board. On its lower surface to glue a piece of nylon fabric size 22×22 mm.
After drying, to the free ends of the fabric are fixed wing, pasting the fabric to the bottom planes of its front parts (fixed). The angle of the “V” of the wing (about 7°) sets at the same time by mowing the side planes of the Board and is locked by a rubber thread inserted in the hole of the console. Root end consoles above and below reinforcing pads made of plywood.
The free ends of the loop hinge Assembly tie thread on the epoxy to rake the fuselage from below at a distance of 34 mm from the edge of the “landing” of the skirt fairing. To increase the surface adhesion of the wing, but rather the mounting Board, it is glued on top of the pad of lime 6×9 mm cross section, making the groove in place of the touch of the rod of the fuselage. Thick pads adjust the installation angle of the wing. The bottom of the charge at a distance of 11 mm from the front part glued to the hook for attaching elastics return of the wing. The second point it is fixed on a hook mounted to the top of the rail at a distance of 7 mm from the leading edge of the wing. This arrangement of the hooks creates the necessary torque to install the wings in the gliding position.
The tail is V-shaped with a camber angle of 140°. Swivel mount — similar to the wing. Two balsa plates with a thickness of 1 mm by using strips of fabric combined with a similar charge, which, in turn, pivotally attach the bottom to the tail beam of the fuselage. Hinge joint similar to the attachment of the wing and are made from wire with a diameter of 0.4 mm mounting Angle of the tail is selected by the thickness of the lining, glue on top of the cost. In the planes of the tail at a distance of 14 mm from the edge, make holes with a diameter of 2 mm for the elastic. Here is the solution — the original. Elastic band, the ends of which are fixed on the bottom two pins, and provides the disclosure of the stabilizer, and mounting it in a position for planning.
Possible backlash in swivel out the tension of the bands.
The mass flight of the rocket plane — about 17 g.
Preparing the model for flight.
First of all, when preparing the model for flight find the location of the center of gravity. It should be located at a distance of 25 mm from the leading edge of the wing (a little ahead of the line of folding of consoles). If not — load the nose or tail section of the fuselage. Then let the model with hands on planning, while achieving steady flying with a small angle of descent. If the model dives — changing the installation angle of the stabilizer, lifting slightly up and back. If cabaret — let her go. This is done by selecting the thickness of the lining. Having good planning, you can run the model on the engine momentum to 1 n·c, achieving the desired result.
V. ROZHKOV