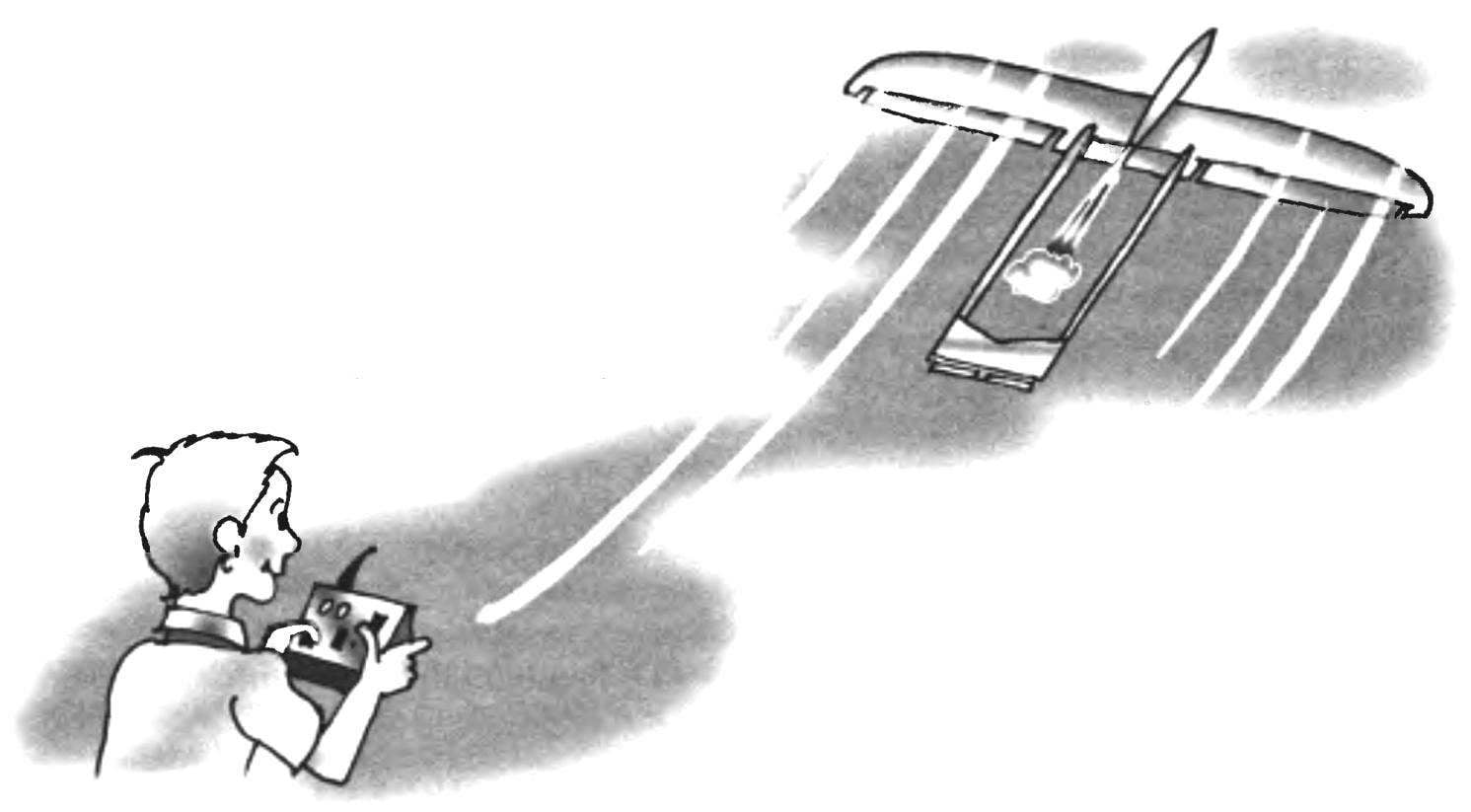 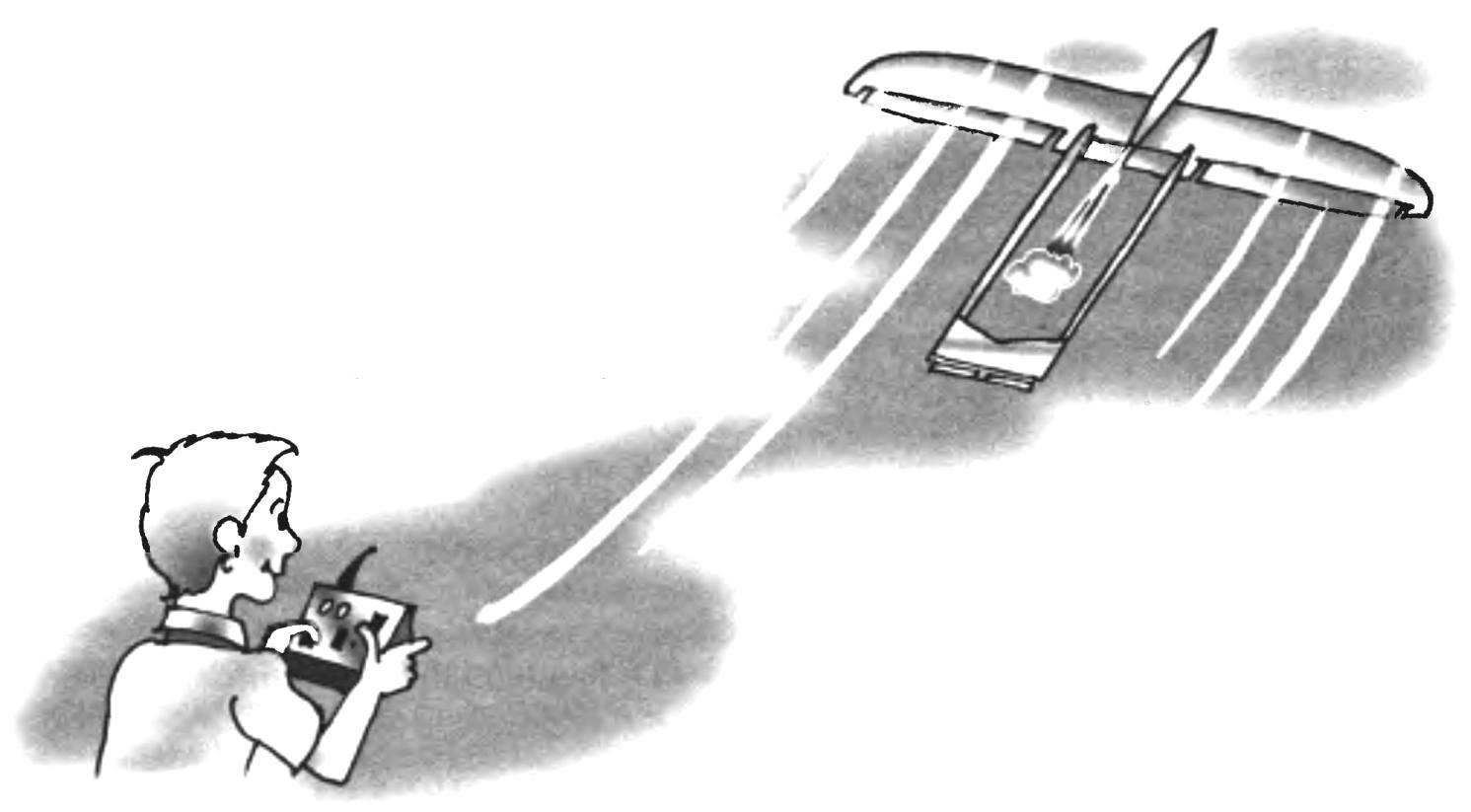 It is hard to imagine the competition without rocketmodeler launches RC models. It is, along with the competitions models-copies, quite an interesting spectacle, including from a sporting point of view. Of course, impressive for the beauty of the start of the model rocket—glider with a rocket motor and control its flight using radio signals.
Competition for the duration of the flight rocket gliders include the single-stage runs any of the beetles of the RC of model rockets that return to earth in stable gliding flight supported by aerodynamic bearing surfaces. Model rocket plane needs to take off vertically or nearly vertically (within a cone with an angle of 60 degrees) without the use of aerodynamic lift. Not allowed in the engine compartment or container.
Currently, the category of radio controlled model raketoplana (S8) are divided into six classes, depending on the total impulse of the engine, the starting mass and wingspan. Young men compete and fly in three rounds class S8D the Requirements for models in this class are: impulse MRD—10,01 — 20,00 H.with; starting weight—not more than 300 g; the maximum flight time in a round is 6 minutes.
In class S8E/P are adults competing on the flight duration and precision landing on a platform the size of 10×50 meters. Technical requirements for models raketoplana in this class are: impulse MRD—20,01—40,0 N.c; starting weight—300 g; wingspan is more than 1100.
Interesting history of the development of radio controlled model raketoplana. In the first, the provisional Regulations of the competition in rocket-space models (1966), the word “radio” is, of course, is not mentioned. All models brought into one category.
The first time I saw in RC flying model rocket plane in 1978 at the 3rd world Championships in Bulgaria. The winner in the category of raketoplana (class S4D) was an American Harald Angren, the model of a rigid structure (plane of the diagram), equipped with a radio. It should be noted that in those days most of the athletes “fly” with the models is made according to the scheme proposed at the time, Francis, Rogallo. It was the aircraft with soft wing.
Since 1980, the Rules (code) of the FAI, a new category of model rockets — S8 — scheme of aircraft (hard). Included it in myself and today, six classes. Moreover, in two classes—S8E and S8F model should only be radio controlled and have engines with boost from 20 to 80 N.with.
At first the competition in this category was presented with several options of technical devices transfer models from the engine (using the MRD) flight to the planner. This displacement of the container with the motor or the bearing surface (wing), the change in the angle of attack of the wing and stabilizer, and the combination of both methods.
At the expense of building a traditional models (up to 20 N.C) the rebalancing was driven by the burning of gases lifting charge MRD common thread, fixing the deflection of the wing or rudder. Radio-controlled rocket gliders the transition from the engine to the flight planning were provided by the deflection by means of a radio signal to the actuator—steering car.
In our country in the early nineties of the last century was the first to master radioecology Valery Myakinin—model airplanes, multiple world record holder. He studied this category of model rockets with an eye break world records. And I must admit that it managed to solve. I was myself a witness. In autumn 1981 and 1982 in the Crimea in the village of planerskoe in the area of mountain of Klementyev I was fortunate to be the stewards of the FAS of the USSR and to fix our (then — Soviet) world records V. Myakinino. And after three years in the grid world records in the S8 category were inscribed only the names of our athletes.
Simultaneously with record of work in our country embarked on the perfection of the models redirectable for competition. To this the then coach of the USSR Stanislav Zhidkov attracted the operators of model aircraft. After all, they already had experience in the management models of gliders and planes. Among them—Alexander Kravchenko, and Vladimir Tarasov (Chelyabinsk), Alex Karabin (Murmansk, Russia), Valery Myakinin (Dubna). Another group of radio operators-“the rocket” were the newcomers: Vladimir Minakov Viktor Kovalev (Moscow), Yuri Palaguta (Sumy).

Model rocket modeling class Ѕ8Е/R Michael Frances (England)— winner of the world championship 2006:
1—gondola: 2—wing; 3—console wing; 4—Aileron; 5—tail beam; 6—tail; 7—thrust; 8—horn; 9—elevators and directions; 10—connector between the wing and the nacelle; 11 —compartment radio; 12—compartment MD
In 1985, at the 6th world championship in Bulgaria category Э8 was presented in the competition program. And then the first winner was the American Bernard burns. We must pay tribute—at the time rocketmodeler the United States had an advantage over athletes from other countries, and their plaque is much superior to many flying practice. But this category (S8) has gained momentum, it was really viewed sporting passion, competitive spirit and entertainment. These models are “sick” and experienced “the rocketeer”, and newcomers in our country. He conducted the search of new design schemes, models and technologies of their production, mastering the technique of piloting. In the development of were and a new MOP, specially created for such models (the so-called “soft”, with increased operation time),
In 1987, in Belgrade at the world championship champion in the category RC raketoplana was our compatriot Viktor Kovalev. After some time, he was the first in the USSR championship, held in Dushanbe. It was at this time Kovalev and proposed a new schema (for this category), the so-called “clamshell”. He created the model made a technical revolution in the design and manufacture of raketoplana. It was widely used new technology—forming fiberglass. It was done: the bow, the beam-fuselage, wing, empennage elements. Wing, consisting of the center and folding the lugs, had a stacked frame with external cladding of duralumin foil of thickness 0.015 mm (center) and metalized Mylar film of the same thickness — the “ears”. It is due to folding of the wing decreased drag during takeoff, and the height of its flight was 400-480 m. Many athletes have adopted such a scheme.
It should be noted that in 1977, the FAI has introduced an amendment to the Code prohibiting to change the geometry of supporting planes. But this innovation has not stopped creative pursuits of rocketmodeler-athletes.
Today from a wide variety of schemes and structures can be divided into three groups. The first is a classic, airplane, controls—Elevator and ailerons. The second diagram of the “frame”. The third “airplane” with a V-shaped stabilizer. One of the above mentioned schemes raketoplana interesting is the design of the model rocket glider class Ѕ8Е/R Englishman Michael Francesa, made on a “frame” with a V-shaped stabilizer. And the angle of transverse “V”—negative. This is due to the lower engine. This design of the tail helps to protect it from fire plume when working MRD. Will tell about this rocket plane more.
The basis of the rocket plane—the wing center section, mounted on the fuselage—nacelle, consisting of two compartments, in which are located apparatus radio and MRD. The housing of the nacelle is molded from the carbon fabric. The “shell” of the bow, where the radio equipment and servos, removable. Between the nacelle and the wing is adapter 6 mm balsa re-veneer (plywood).
The center section is attached in a removable console with a nearly parabolic leading edge sweep of 490 mm. Rear edge of the wing panels are slightly beveled around their middle. Tip consoles smoothly sharpened, the length of 30 mm from the edge bent up. The frame of the wing—stacked, consists of two spars of sandwich (“sandwich”) of balsa and fiberglass.
Wing profile — S-shape — MASK-DRELА, maximum thickness—11.5 mm (on the center). The ailerons are scale 460 mm attached to the rear spar. Console attached to the center two pins, and the joints are Packed with tape.
The tail part of the fuselage is made in form of two conical tubes (beams) with a length of 547 mm, formed of four layers of carbon fabric with a thickness of 0.03 mm with the largest diameter of 8 mm. beams are Mounted on top of the center section, the distance between them is 248 mm. This work is done in the stocks. In it, glue the tail.
Stabilizer—V-neck, made of balsa plate with a thickness of 2 mm, the profile is symmetrical. The angle at the vertex located at the top, -118 degrees. The surface stabilizer is reinforced with platinu. Hinge the elevators and directions (differentially-deflected control surfaces (9) on the plastic hinges, control horns—made of fiberglass. Pull on the handlebars are inside the tail beam. The rocket four servos weighing 5 g—two on the ailerons and rudders.
Model, or wing, painted in bright colors (red, white, and dark blue) alkyd enamels.
The launch mass of the rocket is 250 g.
V. ROZHKOV