Each modeller who builds gliders, you know, what tricks can arrange a gusty wind. However, you can run your paritel ‘ without risk of breaking it’s wings, if you use our suspension system. The Central fuselage of the node we replaced the two on the wing.
The distance between symmetrically arranged hooks made up approximately one-third scale model. Accordingly, the guard rails are equipped with a kind of duplica rope bridle carrier at the ends of the threads small ring.
Benefits of a new scheme? Remember: in large aircraft designers reduce the magnitude of the bending moment in the wing root to installing the struts. Their role in the use of the bridle and performs a “fork” of the handrail. As a result, significantly reduced the load on the console model glider. Now even the sharp gusts of wind or inept athlete will not cause folding wing apparatus when tightened.

A simple diagram of the suspension model of the glider on the guard rails.
Some might say that this scheme is suitable only for training models hard de post modern hook-machine with suspension And duplica still makes sense to think about the design of the machine, designed specifically for a new scheme of towing. After winning promises to be considerable. A significant reduction in bending stress will dramatically reduce the weight and moment of inertia of the glider relative to the longitudinal axis. And this is increased sensitivity of the model to upward flow of low intensity, good “vhodnosti” in such thermals. Ultra-flexible mounting consoles on the fuselage will give the opportunity to use the energy of vertical pulsations of the atmosphere. 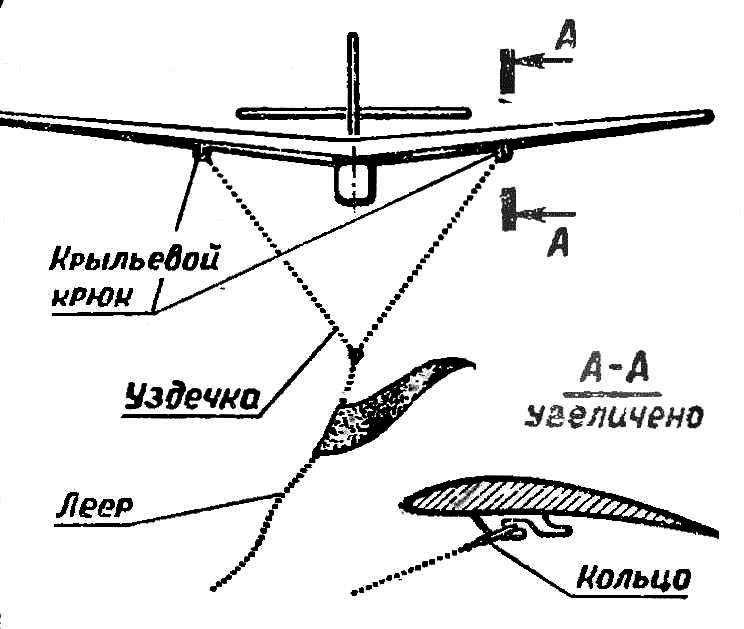 New suspension scheme
The new scheme promises benefits not only in the expense of building a traditional class of paritala, but in the jumper class radio-controlled gliders. Overload occurring during acceleration of such models using motoliberty, reach 40g, flight not above 8g. So, when you go to the guard rails with a bridle glider can become more versatile by facilitating the original design or will be able to build wing panels small relative thickness without the use of modern composite materials.

Changing bending loads along the span of the wing under different charms on the guard rails:
A diagram of the fuselage with one suspension hook (accepted). B — dvuhruchevaja suspension scheme.I. — polarisman model, M is the maximum bending moment.
Doubts about loss recruited when you start the height from the transition to nephrogenesis wings can be immediately rejected. After all, when the elastic planes of winning at least not more than the value of rise of the mean aerodynamic chord of the wing relative to the fuselage.
L. TABIDZE