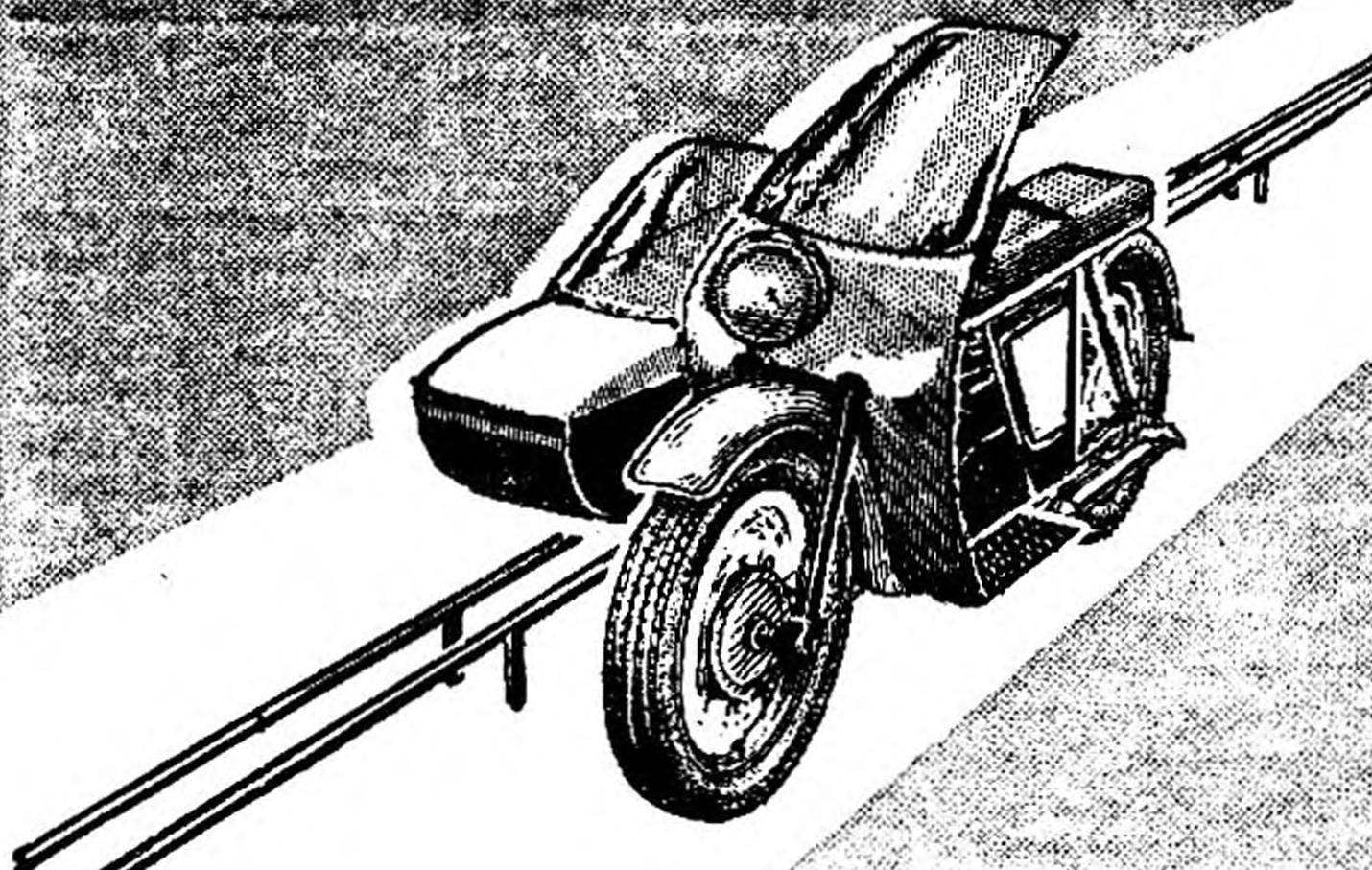 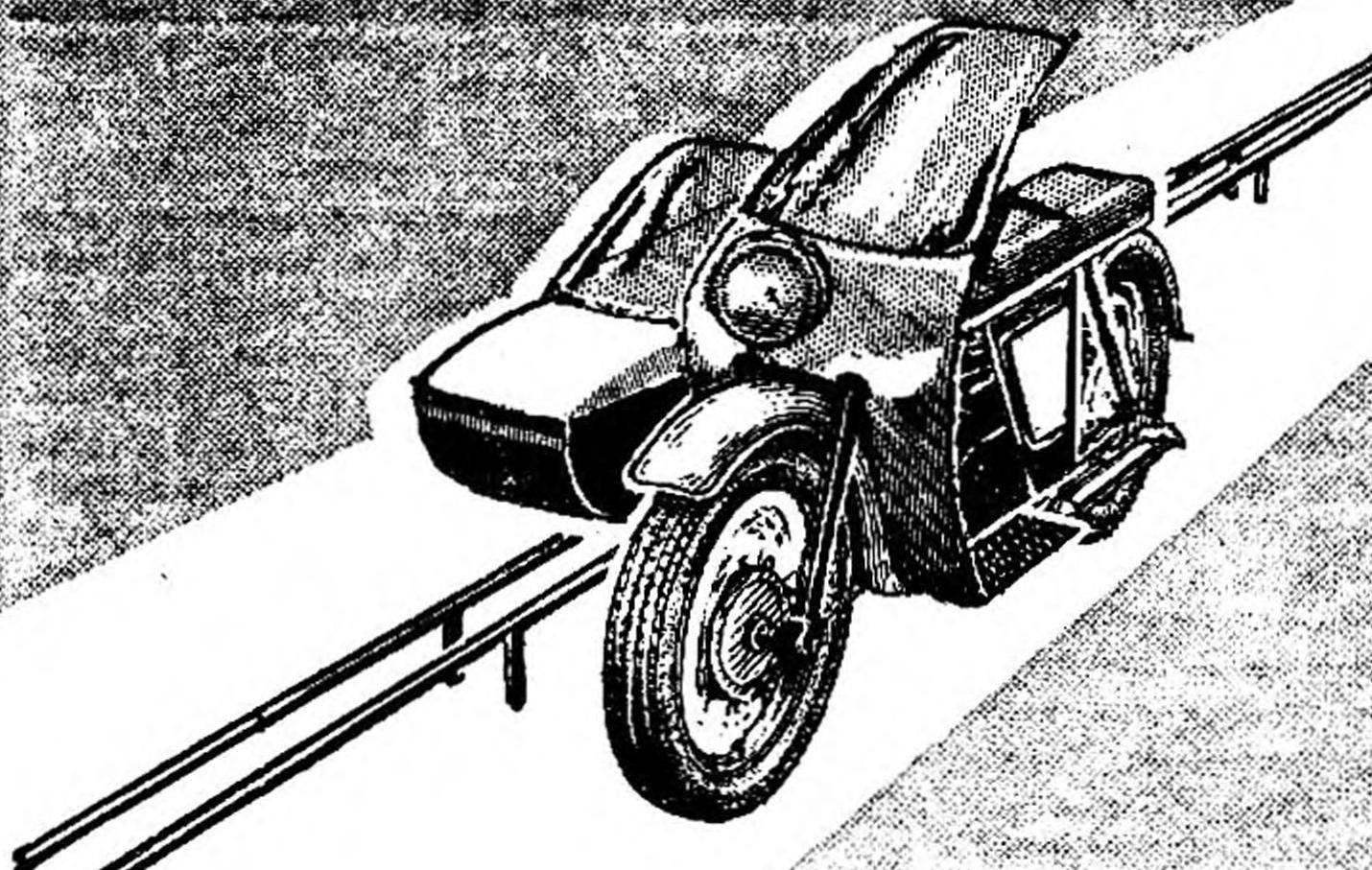 The original self-similar route, combining elements of technical creativity, sports competitions and physical training, developed a young technology of the German Democratic Republic. Its main distinguishing features — the use of motorcycles instead of a car, replacing the grooves under current-carrying copper bus and rail and, finally, the supply of power from generators installed on the bicycles.For the manufacture of the route will need chipboard or whether-ists of plywood with a thickness of 8-10 mm In accordance with the selected configuration of the “racetrack” and the dimensions of the allocated space cut strips (straight and curved) width of about 300 mm and wire them. The surface of “road” paintings it is best to paste over glass or sandpaper.
Current-carrying bus is a copper wire with a thickness of about 3 mm. first you need to remove all of her curves. Fasten one end and wound on the stick the other, pull. Not temporarily detaching the wire, detach the skin of the enamel coating. Mark on the track at a distance of 15 mm from each other and the axis of the tire and along each line the Pro-drill hole Ø 2.7 mm. nails inserted In them or pieces of the same wire, and soldered it to the top of the tire. Bikes, these “power stations” of the route, reinforced in the training machines. Dynamo swapped the plugs on the rear wheels, and through the diode bridges, the rectifier connected with the current-carrying racks each road of the route. A good addition to a “TT” will be the two automatic traffic lights used to hold events of type “rally”, when participants have to stay within the allotted time, while respecting the rules of the road.
All models of motorcycles have the same frame. Each consists of two half-frames, bent wire on the slipway. They are connected by soldering: front — bracket lights and in the middle of the tin facing the flap.
Wheels are better ready to choose from toys. But you can make a homemade, such as cut from plywood, pull on the tires-the tires of the segments and the nipple to the center of the insert to the glue segments of the copper tubes. 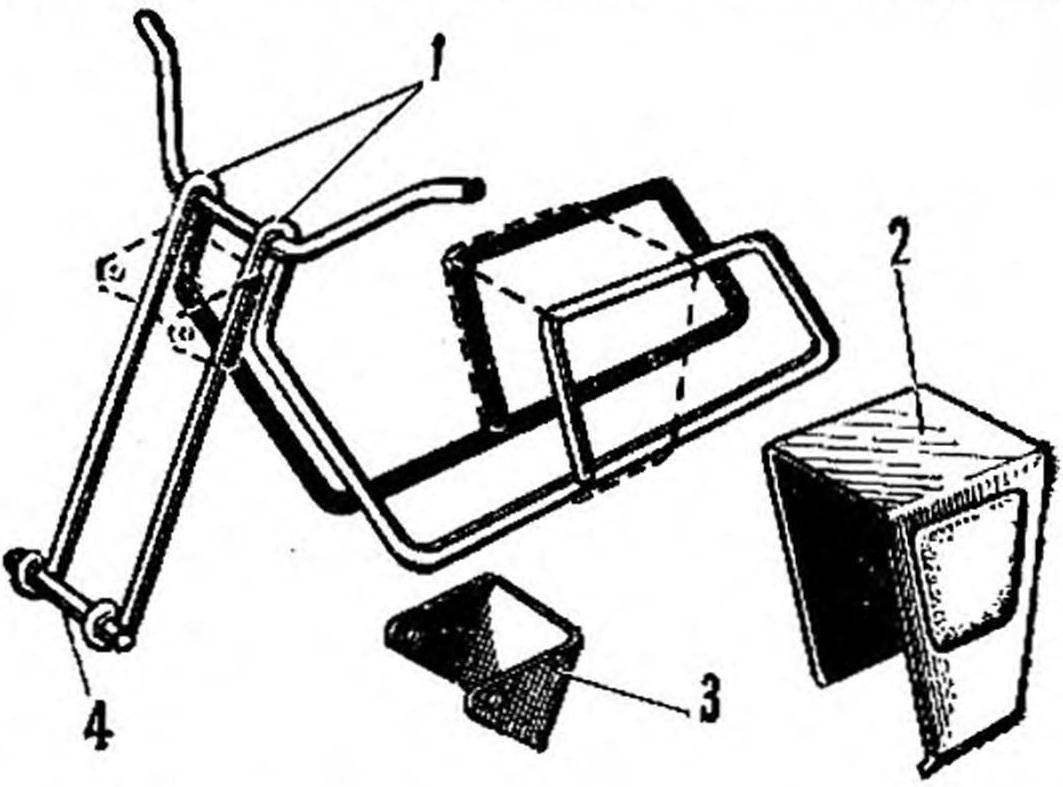 The installation guide and the current collectors for the carriage of metamodel:
1 — pin wire. 2 — the layout of the carriages, 3 — track (PCB), 4 — engine type DP, 5 — collector, 6 — leaf trace.
The layout of the fuel tank and the engine – out fake bars should be painted with gouache and cover parquet lacquer.
Finned cylinder good at it from the “pack” aluminum washers, privernuty by a screw to “Carter”. The saddle is cut from foam or sponge rubber. Mud flaps vykruchivatsya tin.
The stroller frame — the wire, the Motor is secured in a tin pan pharmacy elastic band on his shaft stretched rubber tube, the external diameter of the resulting clutch should be at least 5 mm — in this case the gear ratio can be achieved. The body of the stroller is glued from any sheet material — plywood, 1 mm thick, dense cardboard or soldered out of sheet metal.
The stroller also bottom fixed guide strip and the current collectors. The first cut from plastic (Teflon, polyethylene, Plexiglas or textolite), and the latter are bent from wire OVS Ø 0,5 mm spring with soldered to it a brass tips.

The route for motomobile:
1 — the track (plywood thickness 10 mm) 2 — support legs (nails Ø 2.5 — 3 mm), 3 — the layout of the traffic light. 4 — partition (plywood 5 mm thick), the 5 — pin harness, 6 — conavigua stand.
Competition rules are simple. Metamodel set on the starting line, and the team judges the guys start to spin the pedals. The winner is the one who the first will be a specified number of rounds (50 or 20). But of no less interest are the competition “rally”. Its essence is to pass a specified number of laps over a pre-determined time.
To introduce an element of uncertainty on the track put two traffic lights, each of which operates with its periodicity — the first 5 with green, 1 with yellow and 5 with red, and the second — 10 green, 1 yellow, and 5 red. Check over the stop line when the red light is penalized five seconds that the rider has to catch up.