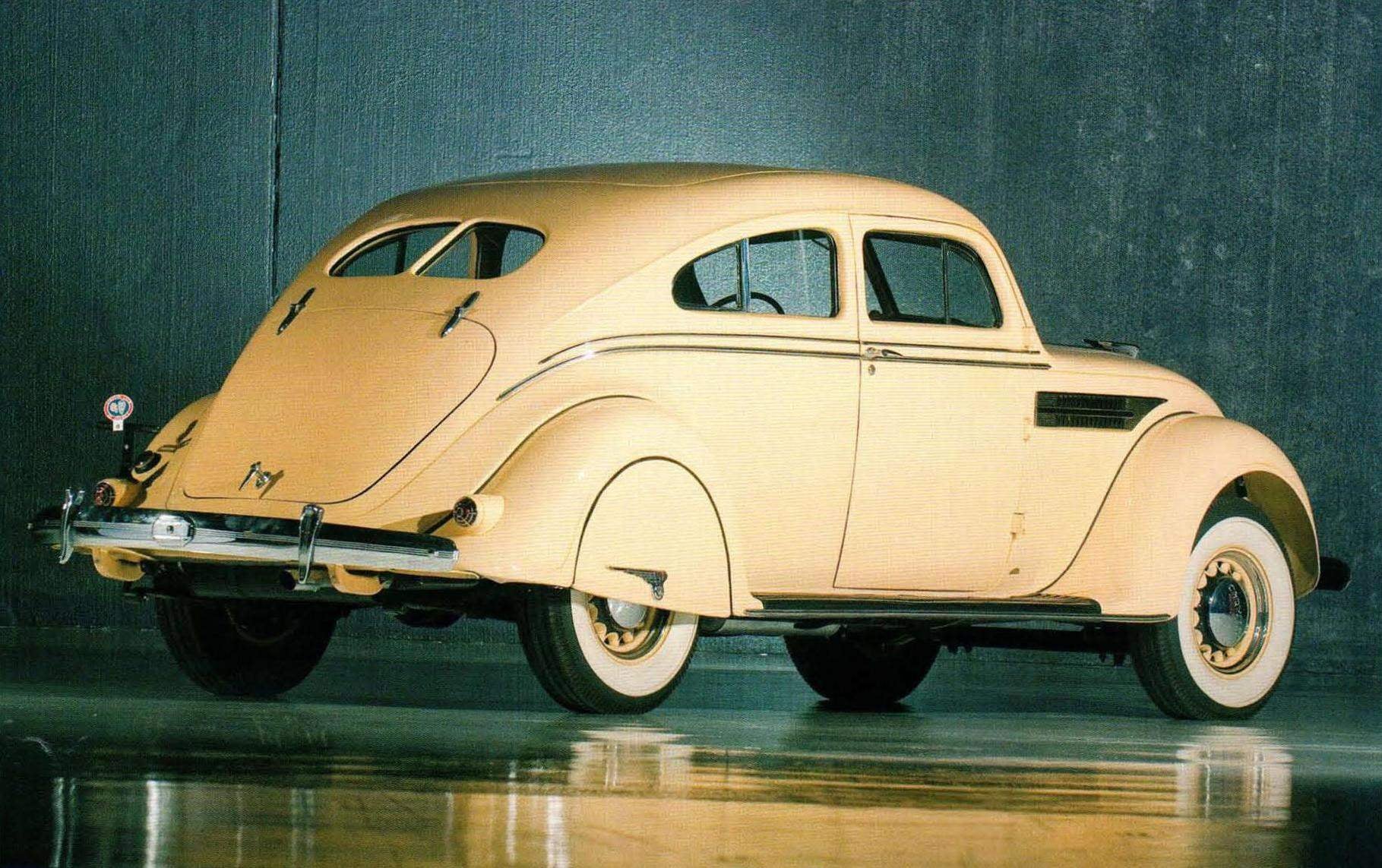 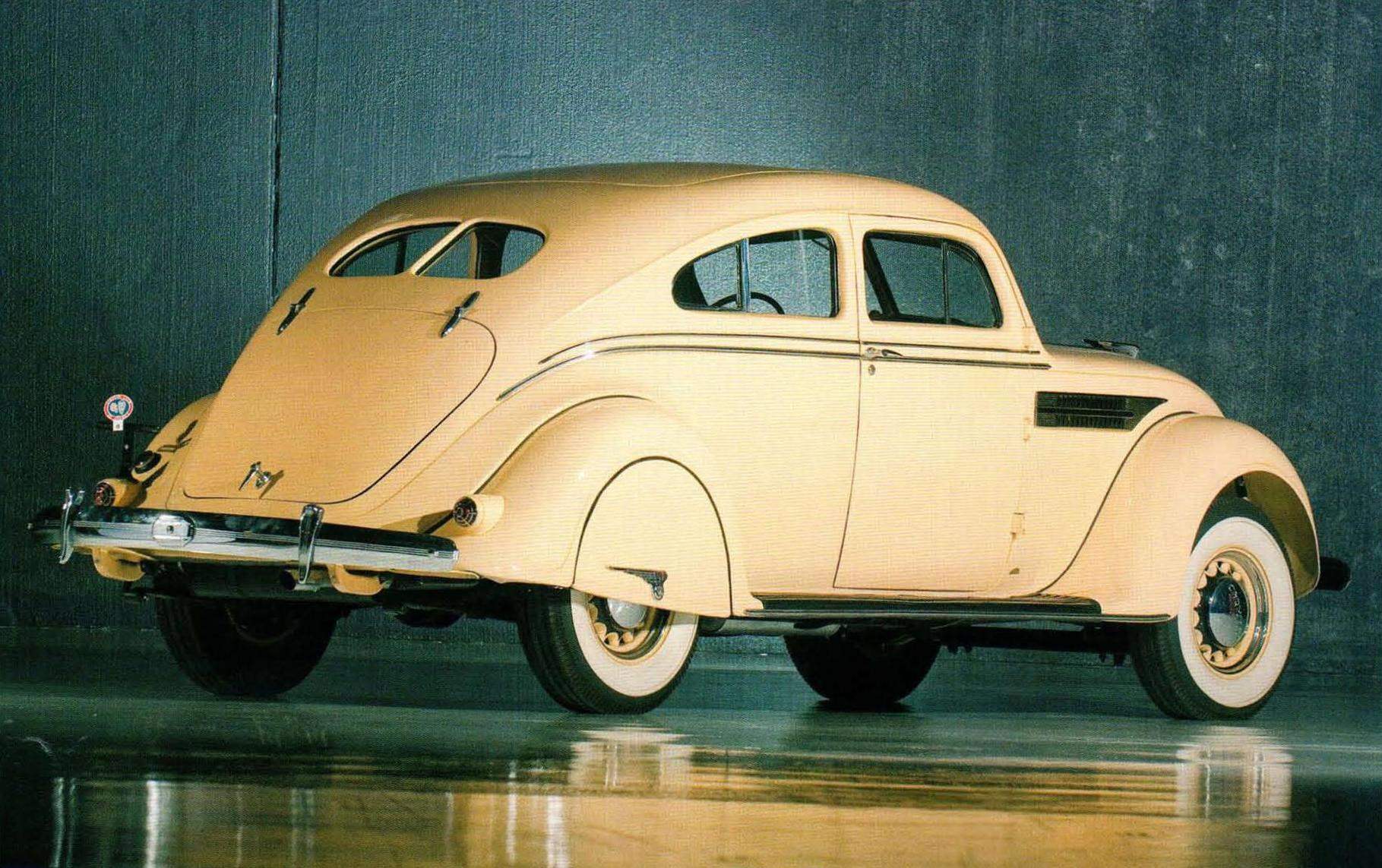 “Aerodynamic” Chrysler Airflow. Biography of Walter Chrysler of the typical American entrepreneur. Before creating his own company, he has worked as an assistant locomotive engineer, and Manager of the American locomotive company and the General Director and company President of Buick and Vice-President of General Motors, and President of the company Willys-Overland, and head of Maxwell-Chalmers. However, the first private car appeared Walter Chrysler only in 1920 when he was 45 years old. To get acquainted with his design, just before he tore apart and then reassembled it, and only after that decided to get behind the wheel.

Despite their well-paid posts, Chrysler always had the dream of owning your own car company and passenger cars, the design of which he could bring all his experience and all of their designs on their technical perfection.

There were four of them – talented engineers Fred Zeder, Owen Skelton, Carl Breer and tireless leader and organizer of Walter Chrysler, the owner of two vacant premises, where it was proposed to organize the Assembly of the car, which the foursome had yet to construct…
In 1923 the project of the new car was ready. Machine equipped with 6-cylinder engine producing 75 HP, called the Chrysler 70, was immediately put into production. In a short time Chrysler was able to deploy its mass production, and to a certain extent due to the fact that the car had a considerable demand from buyers – in 1924, has sold more than 30,000 copies Chrysler-70.
First success inspired the car, and in 1926 came off the Assembly line just two car – not less popular with buyers Chrysler Four very economical and luxury car business class Chrysler Imperial Six. 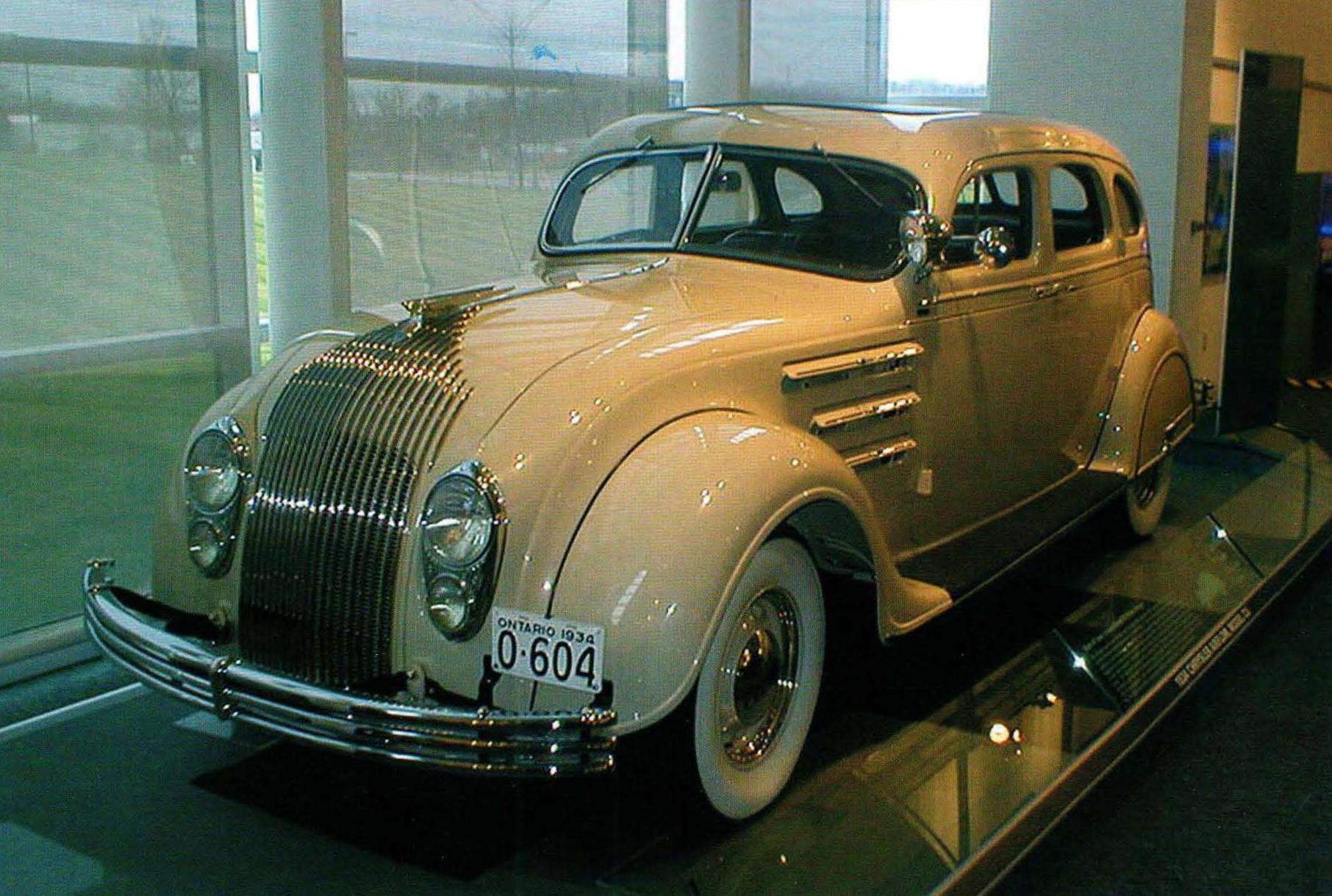 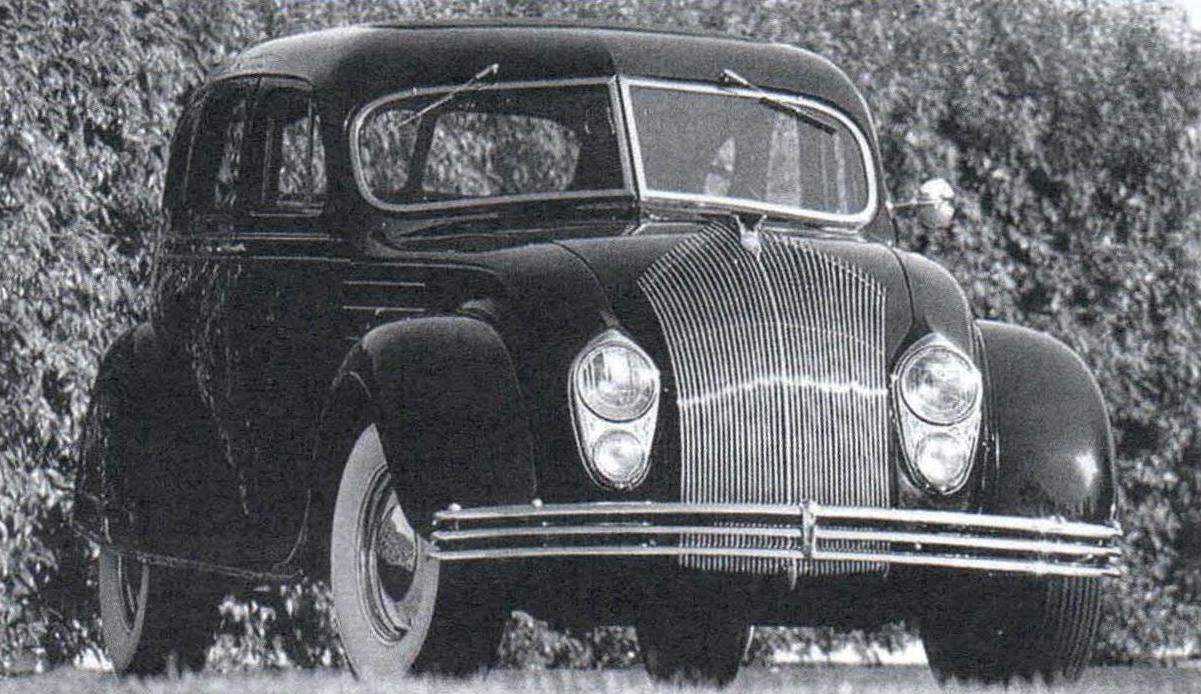 In 1929, the firm announced the launch of two new models equipped with engine 80 HP and 125 HP Chrysler at the same time organized the design of assemblies and mechanisms to simplify and facilitate the control of the car. So, his cars appeared automatically activated clutch, engine mount on rubber-metal hinges – silent-block-synchronized transmission and semi-transmission type Flui Drive.
In the early 1930-ies of the designers of Chrysler encroached on something ephemeral, something not yet touched the car. It’s the air or rather the air flow.
Few people know that at a speed less than 60 km/h the drag of a body moving in the air flow, depends mainly not from its shape but from your midsection – the area of greatest cross section. Perhaps that is why in the beginning of the XX century the makers of airplanes and cars on their aerodynamics have not thought much. However, with the growth rate were that the devices streamlined compared to those that have the shape of a brick, with an engine the same power to develop a much greater speed.
In the end aerodynamics and venting models of cars in wind tunnels have become commonplace, and the major characteristics of cars began to clear previously only aviators CX – the drag coefficient.
According to historians of the car industry, the founder of “aerodynamic” design approach car firm, Chrysler was his longtime associate Carl Breer, observed the similarity pattern of the wind flow over the car body and fuselage of the aircraft. And the first streamlined car, dubbed the Chrysler Airflow (the airflow in translation from English. the air flow) was released by Chrysler in 1934. 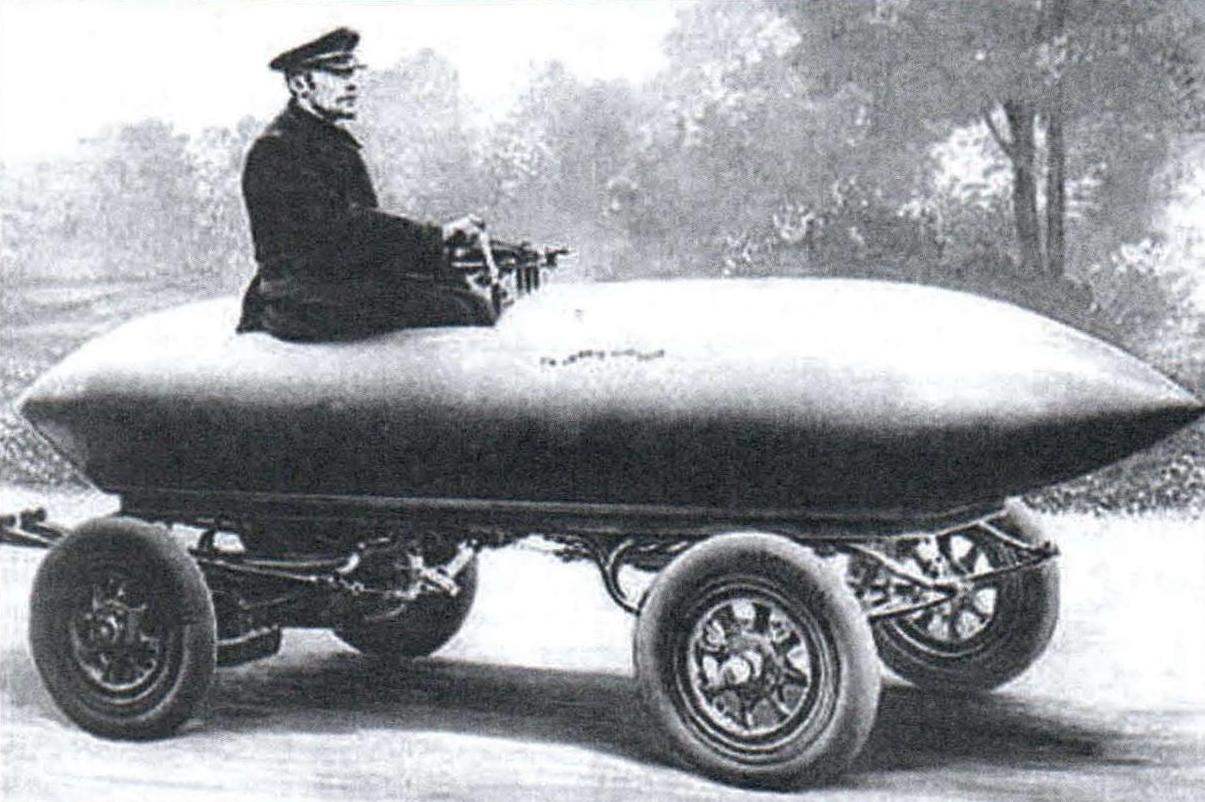 One of the first cars with a body a streamlined shape was created by the Belgian designer and racer, Jenatzy. It is on this machine he first broke the speed of 100 km/h

Car Norris Streamliner with a serial, chassis and teardrop-shaped body, made in the early 1930-ies by special order of the buyer firm McQuay-Norris 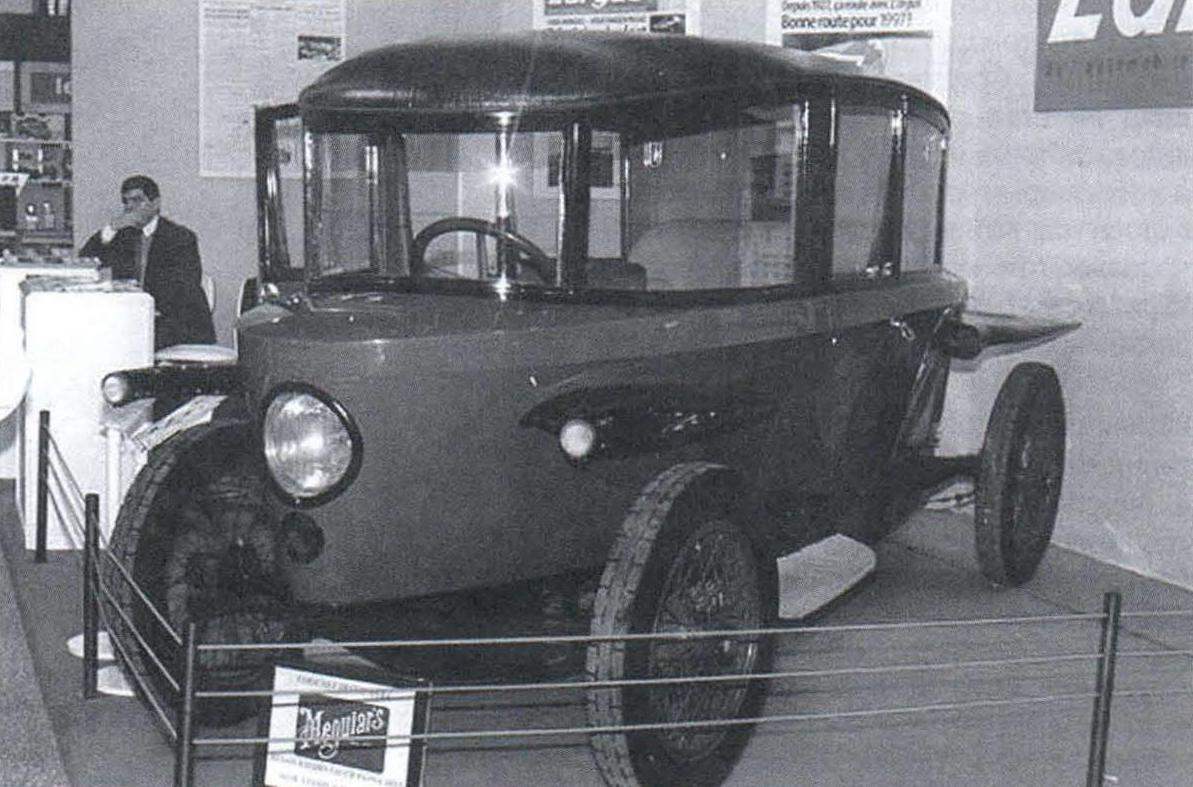 The car with streamlined bodywork Тгорfenwagen, designed by German designer Rompieron in 1921, was mass-produced until 1927
This car was created in the midst of the great depression. Car sales fell, and Chrysler to save funds we decided to get rid of the test center. However, his Manager Harold Hicks, who previously worked at the firm of Henry Ford in the Department of development, presented a plan that allowed to increase the speed of the serial car from 134 to 159 km/h, only by mounting on the car body a streamlined shape. The idea looked good, and Chrysler promised to keep the test center if the theoretical calculations Hicks will be confirmed in practice.
Create the body a streamlined shape, for a car the Chrysler Airflow was performed using the blowdown car models in the wind tunnel. Their results entailed a number of changes to car design – in particular, the displacement of the engine backwards, which allowed us to mount the radiator with the tilt, use a bent (V-shaped) of the windshield, the placement of headlamps in the front of the body flush with the sheathing, etc.
In the end, the shape of the body was practiced by designers in accordance with the rules of aerodynamics of the time. Accordingly, the changed design of the machine – so, instead of heavy spar frame used a lighter tubular farm equipment front axle extra-long leaf springs provided an excellent smoothness, and 8-cylinder 97 HP engine clocked “aerodynamic” car to a speed of 145 km/h.
Airflow went on sale in 1934. Much to the surprise of the developers and managers of the company, a car with futuristic for the time appearance, that is, “do not go” – the audience didn’t take the car with a body that did not have clearly defined edges and consisting of gently flowing into one another surfaces. In the first year of serial production of the car managed to sell only 10 839 Airflow, and four year – only 30 673. For comparison, the previous generation cars Chrysler-70 Six in the first year of issue implemented 32,000 copies!
Interestingly, the Chrysler Airflow was not the firstborn in a series of “aerodynamic” cars. In the 1920-ies the first experiments on the reduction of drag began to constructors of racing cars. However, in those days we could talk only about their psevdoobratimy because lines of cars were determined intuitively, without any sufficient scientific studies and wind tunnel. As a result of this cars speed almost no different from the traditional. 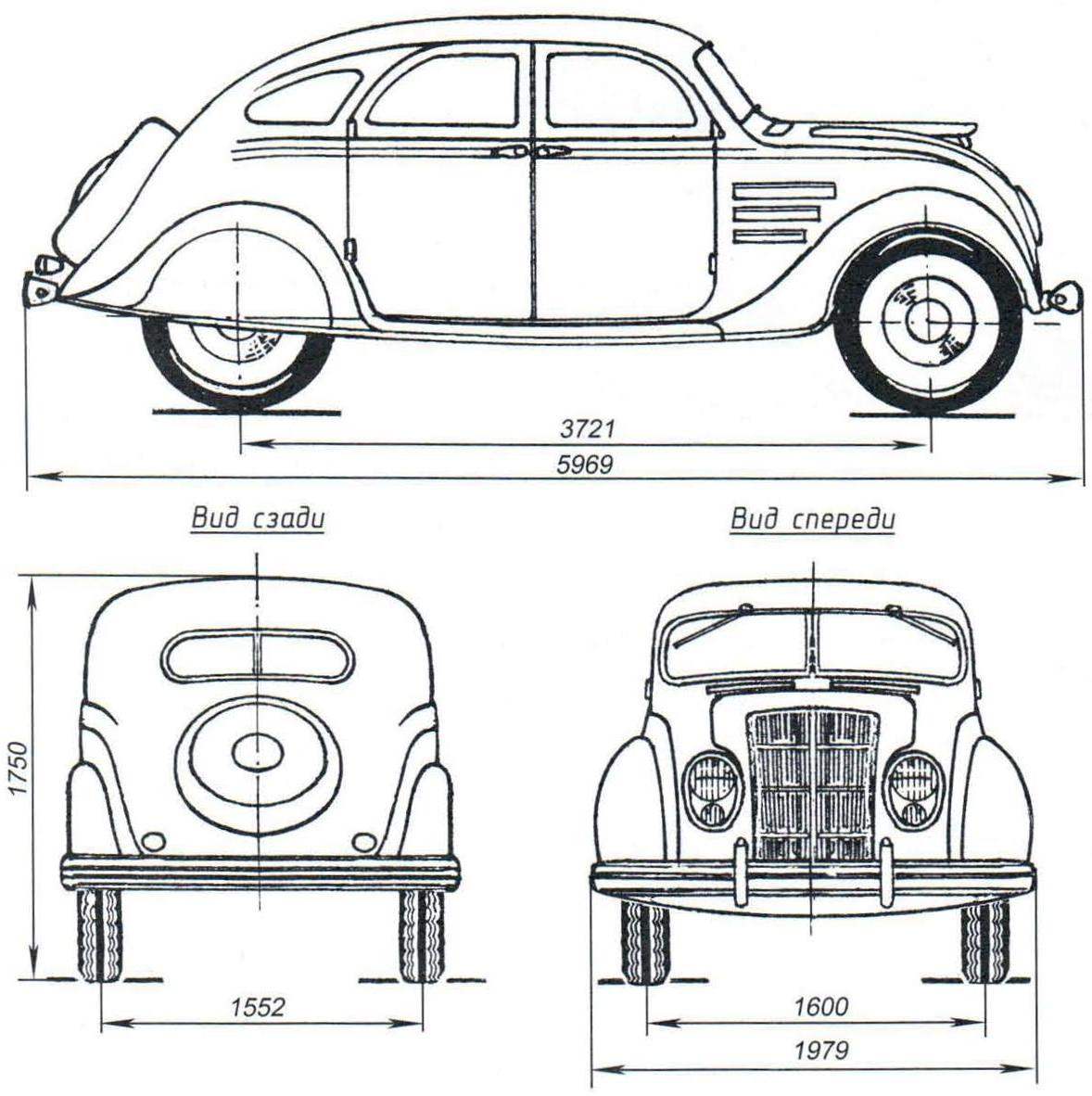 The principal dimensions of the Chrysler Airflow 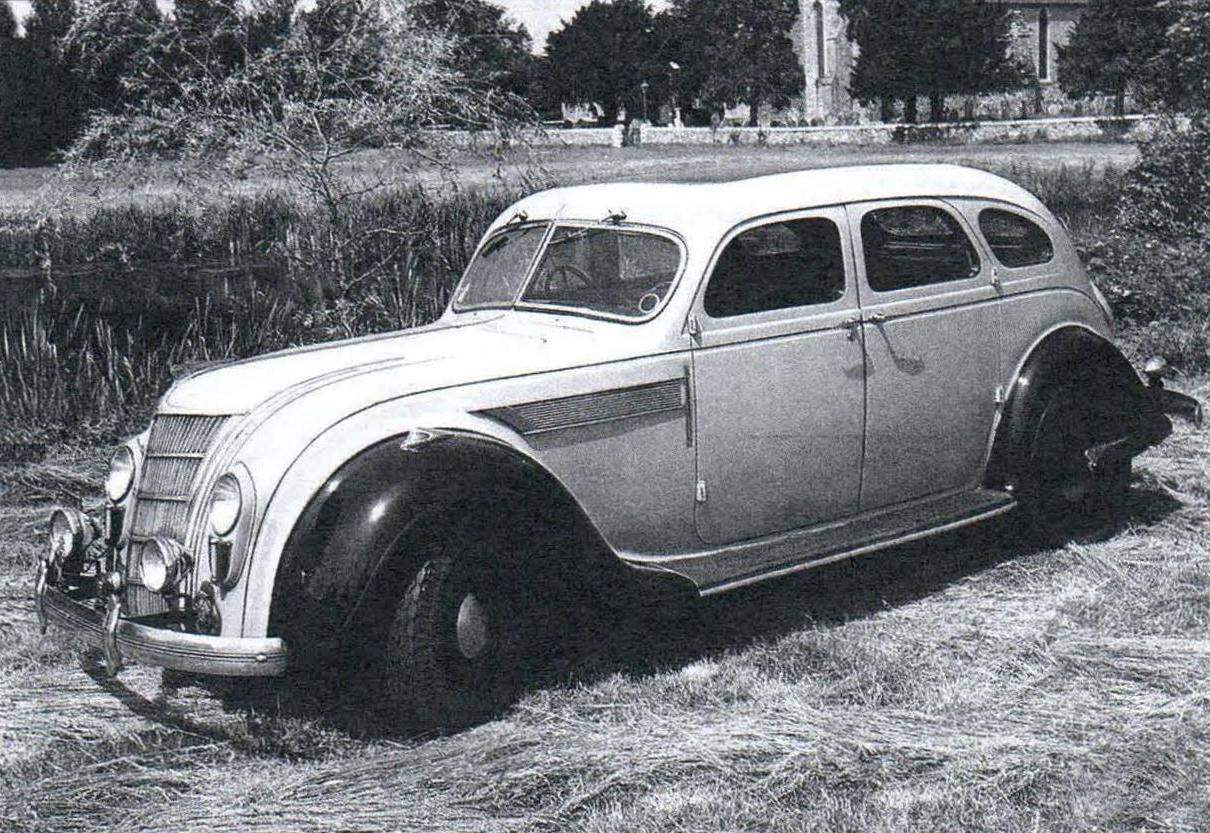 “Aerodynamic” Chrysler Airflow with a body a streamlined shape is one of the first designed using aerodynamic calculations and purging of the machine models in wind tunnels (1934)
The turning point occurred in the early 1930-ies. In 1934 a Czech company Tatra produced the Tatra 77 with the aerodynamically perfect body with a drag coefficient of CX = 0,38. Futuristic car developed a speed of 150 km/h. In those same years, in France appeared the 55-horsepower Peugeot-402 with a body, differs little in form from the Airflow. And in 1934, Ferdinand Porsche created his famous runabout Volkswagen-S0 with a well-designed “aerodynamic” body.
All of this suggests that the reason for the rejection of the Chrysler Airflow of the public is unlikely to become only the appearance of its body streamlined. According to the marketers, the reason for the small demand for Airflow is that it began without the benefit of a convincing advertising campaign.
In 1936 Airflow body shape changed in accordance with the preferences of the buyers. In particular, at the front of the car a traditional radiator and separately installed lights, however, local design changes, as well as the new name of the car Chrysler Airstream, almost did not affect the sales of this car.
The outbreak of the Second world war forced Chrysler to restructure production to production of military equipment. Until 1945, the concern was producing army trucks (500 000 copies), Sherman M4 tanks (18 000 copies), aircraft cannon, aircraft engines and other war products. The profit earned by the concern during this period, allowed Chrysler after the war, to purchase eleven(!) plants.
In the early 1950-ies in the car company Chrysler has a steering, locks (and therefore keys) ignition, panoramic windshield, and a more advanced suspension.
In 1957, the cars were equipped with rear fins and automatic hydromechanical transmissions, which were made by pressing buttons on the dashboard. In the following year appeared the first American cars with a monocoque body (note that the Patriotic “Victory” with a monocoque body appeared in 1946; the bearing body also had an Executive car GAZ-12 ZIM edition 1950). 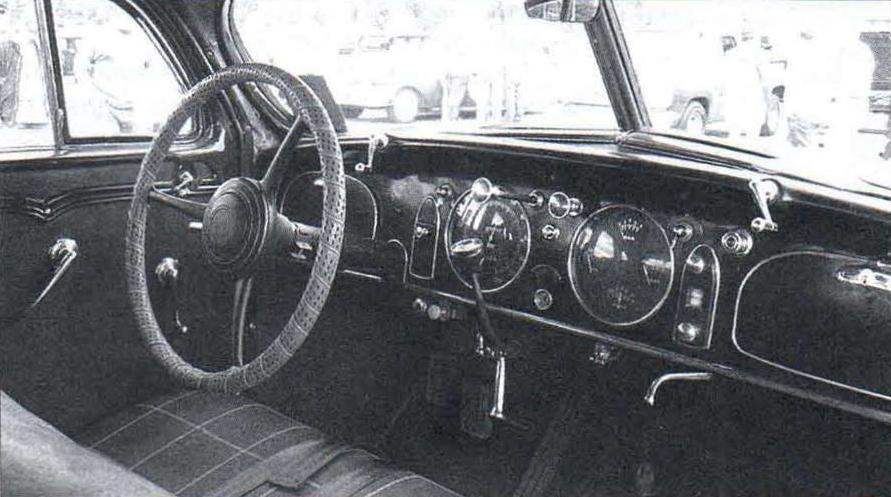 Interior the forward cabin of the car Chrysler Airflow 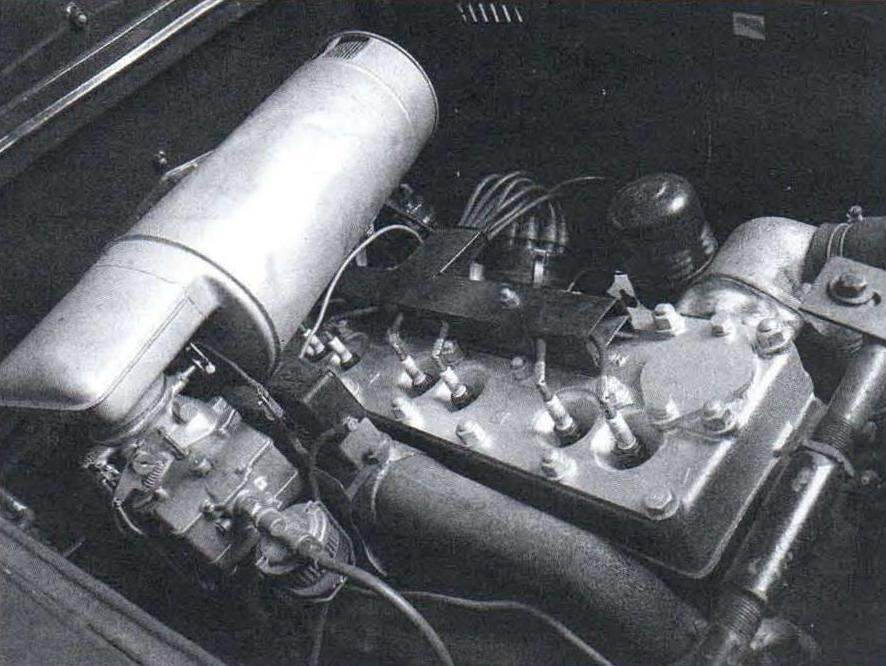 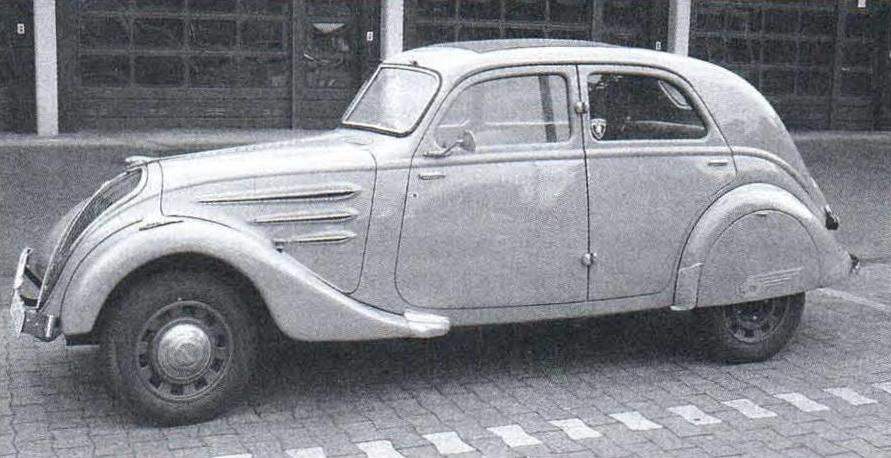 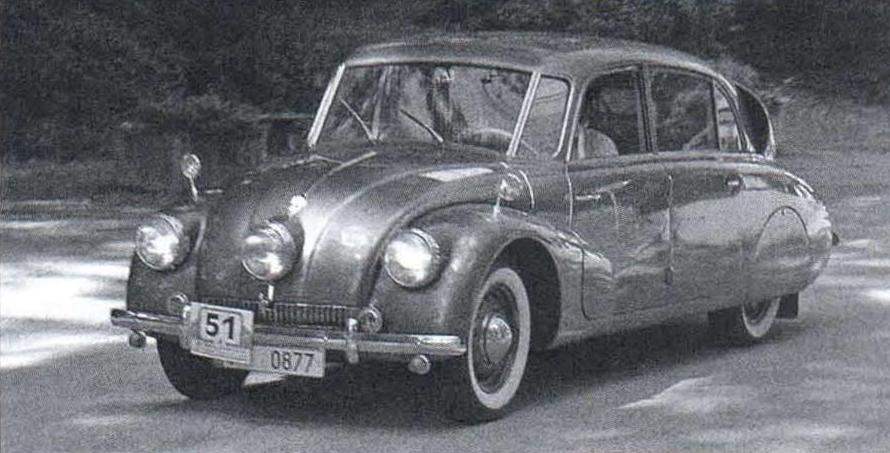 1930-e years have been fruitful for cars with “aerodynamic” body. The most successful European automobile manufacturers. Thus, the firm Peugeot has released very popular with buyers, Peugeot 402, and the firm Tatra – streamlined Tatra 77 and Tatra-87