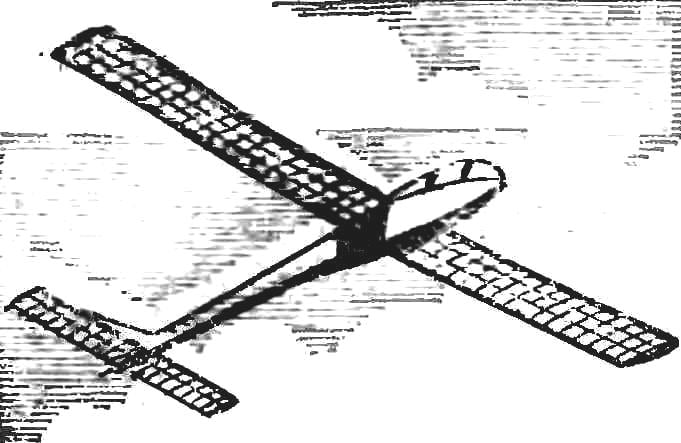 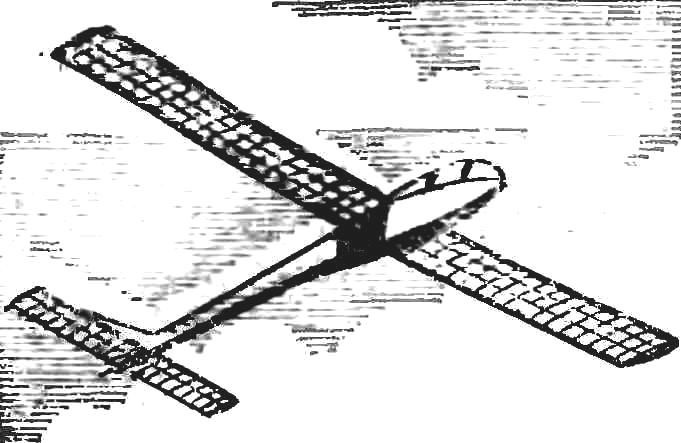 The entrance to the house I saw a boy pet of the twelve who, standing in front of Mr. he, gave to someone signals. All his efforts, however, remained unanswered. To login for some reason he hesitated. And from the open window came the sound of muffled voices, in a brightly lit room, something made guys and were clearly visible, glittering with fresh paint model airplanes.
The boy, noticing that he was being watched, walked away from the window and with interest asked: “You here?” And as if nothing had happened ran skipping across the yard.
A few steps up — and I entered the room of station of young technicians No. 2 Tushino district of Moscow.
In the room, which housed the aircraft modeling club, and smelled of dry wood, amelita, on the table were drawings. The children enthusiastically went about their business.
One of the tables bent over a man drawing something slowly explained to young companion. It was the head of the aeromodelling circle Yury Surov.
Sasha’s Forest is a serious question:
— Kai to strengthen the wing?
— You, Sasha, think — told him Yuri.
— Good lad, ‘ said I, Yu. M. severe. — He is in seventh grade, capable and can say that the personnel, with experience. Here to drive him away was: the parents got an apartment in the new area. You have to get almost all of Moscow.
There was a time when Sasha is in the Forest roaming the streets without work, a poor student, looking for syt, pranks, prevented people to work. Once he became interested in radio-controlled model. Yuri noticed that the boy attracts attention of fuselage for RC model glider and it is about something he’s thinking real hard. Finally the boy asked timidly:
— Can I have you do?
— Please come, — said Yuri Mikhailovich.
— And a model I can do? — again asked the boy, not believing that he would be allowed.
— And this model will be able, and something else, encouraged by his leader.
So Sasha became a permanent member of the aeromodelling circle.
Yuri gave him that one job, then another. The boy tried hard and after a while made almost all the parts to the model. The most joyful for Sasha was a day when the model rose into the air. Alexander used to work, corrected his behavior, he began to learn better.
Sasha will be remembered for his first competition. That day he was confused, seeing around the venerable model airplanes. Little he still had the experience, confidence in their abilities. But he was an experienced Manager. And that decided the outcome of the fight. The young designer took second place. 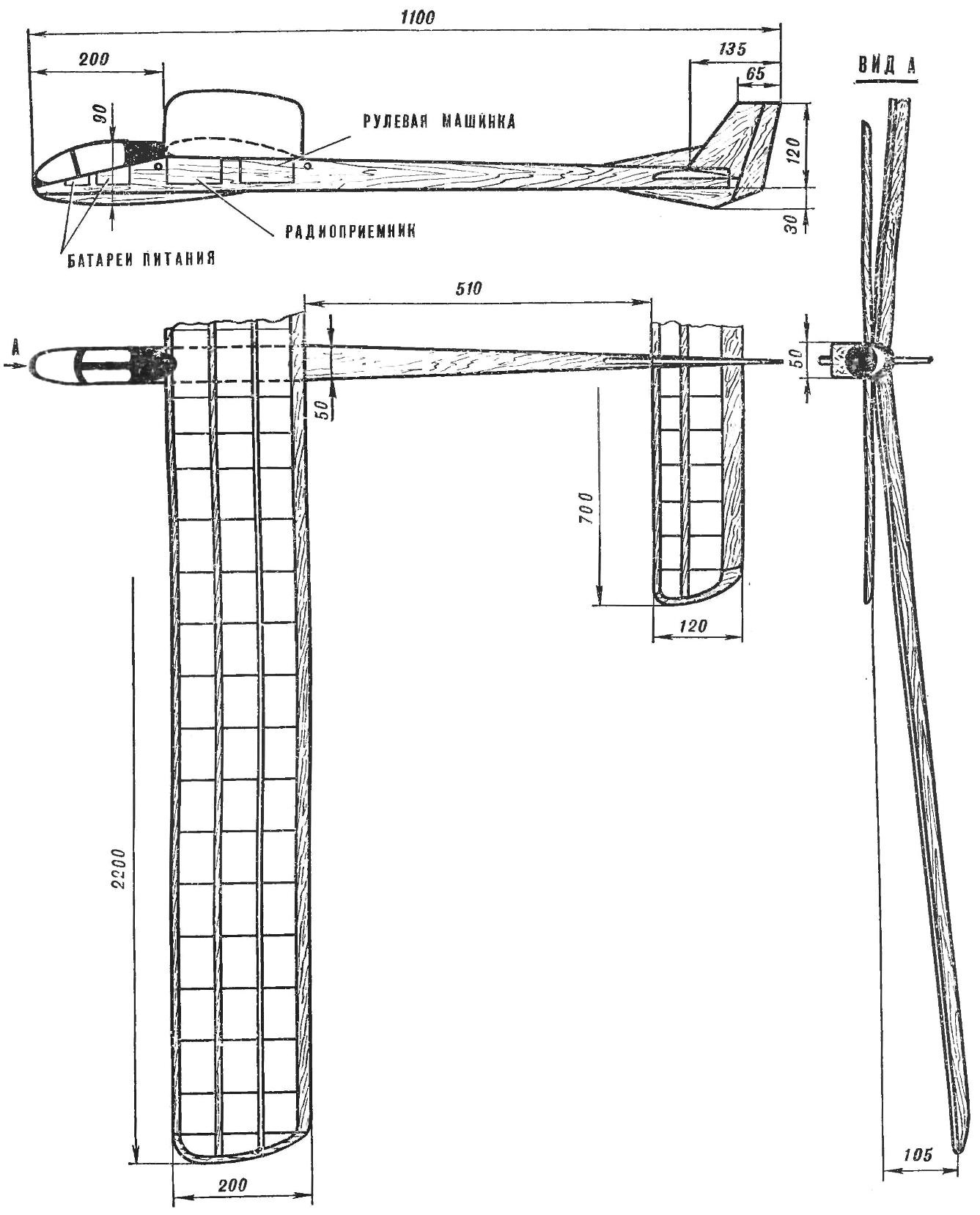 RC MODEL GLIDER DESIGN A. FOREST (head of the Y. M. STERN)
The model is a cantilever monoplane. In the nose of the fuselage is block of foam with cells of the battery power, radio, and steering cars. Radio equipment designed by A. Kuznetsov and V. Puchalski is characterized by high reliability and simplicity of operation. The fuselage has a rectangular cross section and rounded edges, covered the balsa with veneer. The wing is rectangular in shape, is located above the fuselage. Wing profile PLANO-convex 12% (B-10357). The keel on half chord offset for the stabilizer which has a PLANO-convex (8%) profile (modernized “Clark V”).
THE BASIC DATA MODEL
Wingspan, mm……… . . 2200
Wing area, DM2……. 44
The scope of the stabilizer, mm………700
The chord of the stabilizer, mm ………120
The surface of the stabilizer, DM2……8,7
The length of the model, mm…………100
The area of the keel, DM2…………1,05
Full flying weight of the model, g……1100
The installation angle of the wing………………3°
Load bearing surface, g/DM2 . . 20
Sasha was seriously thinking about how to improve your model. A critical analysis of the experience of past competitions helped him to significantly improve the model. Howling changes in the design of the fuselage and installed new radio equipment. These alterations and increased over the years, the skill brought to Alexander Forest a deserved victory. In 1973, he became the champion of Moscow among schoolchildren on radio-controlled models of gliders. Model LA-19 in all three rounds of the competition scored the highest accuracy at landing and amazing parity in the program.
Yuri looked at the guys working and thought… for almost thirty years, severe enjoys himself and draws other aeromodelling activities. Thanks to him, the energy of hundreds of teenagers have received reasonable and creative direction.
— In model aircraft, “he says,” I came when I was in fourth grade. And since then all my free time giving her beloved hobby. The aircraft immediately captivated me, as they say, a calling.
I was lucky — continues to Yuri Mikhailovich, my teachers were talented aeromodellers M. E. Vasil’chenko and P. Pavlov. I strove to follow the elders.
A lot of young technicians was held in front of Yuri Mikhailovich for many years. Many left the collective letter, full of gratitude for the care, others will remember some of the lines of the character.
Some of them such as E. Minev and Y. Yakovlev, became masters of aeromodelling sport of the USSR, the other — military pilots, and others, like himself, of the aviation engineers.
— You always so crowded? — I asked.
— In the group of fifteen people, but there comes much more, — said Yuri Mikhailovich. — Now here is the youngest.
— Also your students? — I pointed to two tall boys of twenty.
— Ex, — said Yuri with a smile. A. Pankov and S. Elizarov — students MAI. But come, don’t forget. Build a new model.
Go out with Yuri Mikhailovich on the street. Dusk covered the city. Cold. I told him about the boy noticed the window.
— So, someone of the friends it does have, and this is shy, he smiles. — Sometimes shy at first. This is to tear off the street, interested difficulty, and then, suddenly, a activist will.
And I want to understand this enthusiastic person with a cheerful certain panache in the eyes, the motives that make it more than a dozen years to continue once the case. And here Yury Mikhailovich comes to my rescue:
— Each of the guys, growing up, preparing to fly. Man, too, was given wings. They need help passion to get stronger. Gonna be a long flight…
I. ANEMPADYSTAU