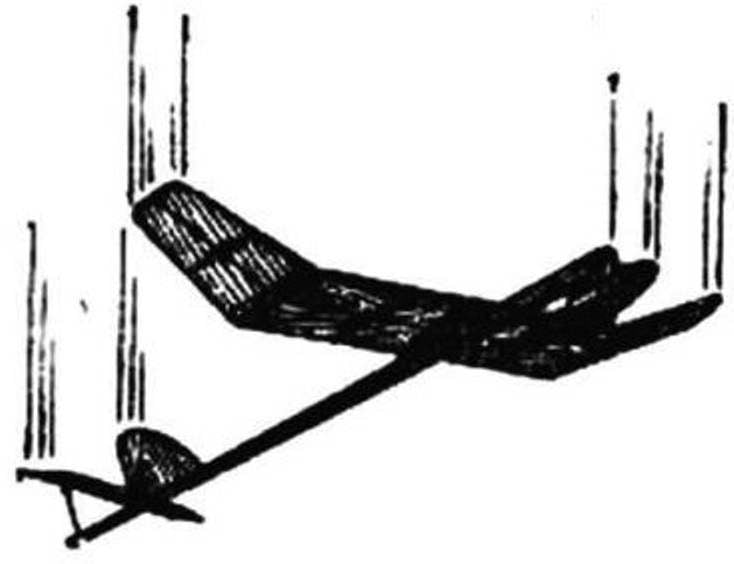 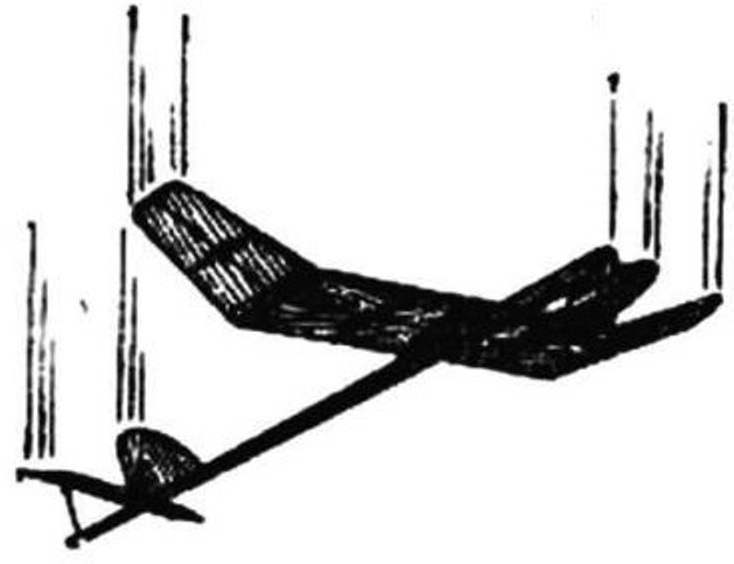 In the journal “modelist-Konstruktor” No. 11 for 1981, we reported on a new category of raketoplana S8. In the same issue was published the drawings of models of the class S8A. Today we offer to your th account the description of another rocketplane — class S8D. It is interesting the original design of bearing areas of changing geometry. Furthermore, it simultaneously satisfies the requirements of category S4. Similar models in the class S4D Moscow athletes competed at the Championships of the USSR. The proposed design of the rocket plane designed by head of the circle of the Moscow city Palace of pioneers and schoolchildren by V. Minakova.
Minimum aerodynamic resistance, the stability of the vertical take-off and good planning are the main advantages of the rocket with the changing geometry of the supporting planes. On this model before take-off the console, bent down under the center section and then the dog wing rotates around a vertical axis that is located along the fuselage. Nylon thread passed through a hole in the engine compartment and attached to the hook on the center, lock the wing in this position. When triggered, expelling charge engine burn through the thread and folded the plane under the action of the rubber expand and open, turning into normal wings. In this kind of planning keeps them glued to the pylon stopper.
The plane of The two plates of balsa and light ply (1.5 and 3 mm), glued at a slight angle with ribs of different thickness. Boles thick are installed in the fixing brackets and the pylon. Wing is better to do a full swing, and after coating Amalita to cut the console to fit them joints with the center section. Then attach the console with four filament loops, insert the plane all the hooks and install the pylon. At the location of the holes the iodine axis of rotation to the top of the wing to glue the celluloid washer on the bottom end of the pylon strip of fiberglass with a thickness of 1 mm. Will remain only to fix the stopper pole made of OVS wire O 0,8—1 mm.
The fuselage is made of hard balsa, its cross-section changes from rectangular at the front to a triangular tail. Engine compartment, laminated of fiberglass, mounted on a balsa pylon. Front compartment closes with a lightweight fairing, machined on a lathe. 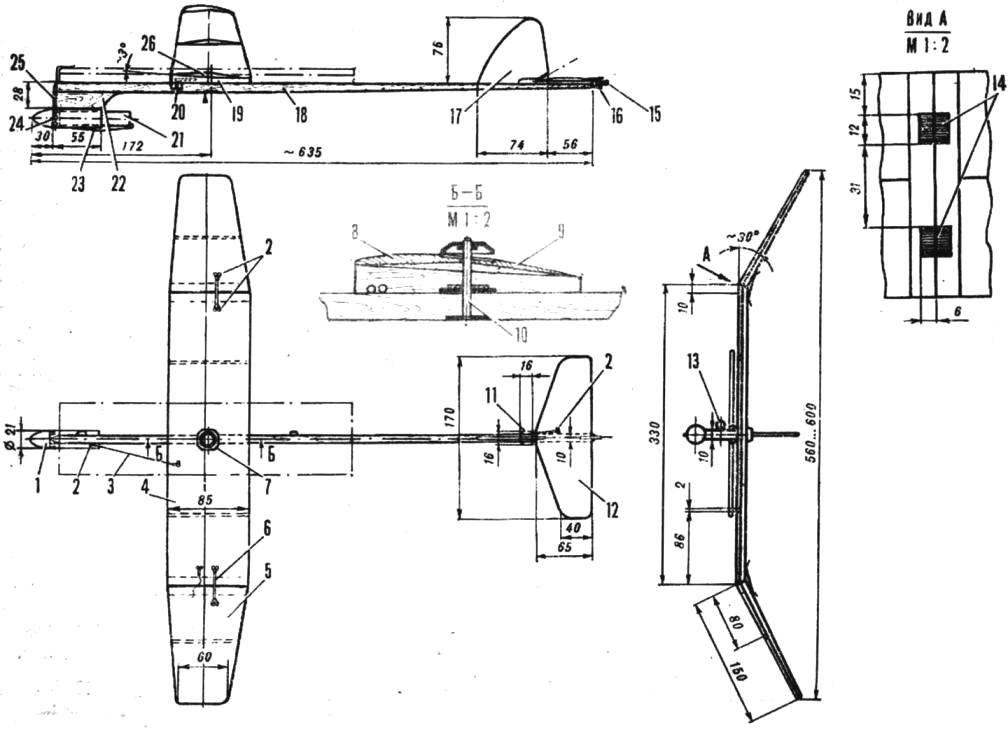 Rocket class S8D:
1 — cowl, 2 — hook, 3 — rubber thread turning wing, 4 — wing, 5 — console 6 — rubber thread lift consoles, a 7 — figure nut, 8 — plate front wing, 9 — rear wing plate, 10 — axis turning 11 — joint hitch stabilizer, 12 — stabilizer, 13 – ring, 14 hinges hinge console, 15 — wick, 16 — pin, 17 — Kiel, 18 — the fuselage, 19 — pylon wing, 20 stopper, 21 — MRD 22-pole engine compartment, 23 — locking hook. 21 — engine compartment, 25 — thread fixation of the folded wing, 26 — a rib.
Tail carved from balsa plates with a thickness of 1,5—2 mm and covered with a thin layer of epoxy resin. The keel is glued to the fuselage, and a stabilizer pivotally mounted on the filament loops (nylon yarn wound on two celluloid plates). The tail profile is flat with rounded edges. The time limit of planning is due to the burning of the wick strands, holding the rear edge of the stabilizer. As a result, he under the influence of rubber thread tilted upwards at an angle of 45°, translating the model to the parachuting mode.
Let’s wing. First of all glue on the bottom and the upper surface of the fuselage is glass fibre laminate plates reinforce it in the place where he will be the axis of rotation. Its manufacture of steel wire, O 2— 3 mm and glue insert it into the hole of the fuselage. Putting on the axle wing, check the ease of movement and folding consoles. Measure the installation angle of attack in an open position of the planes — it needs to be equal to 3°. On the axis of the wing is fixed shaped nut, machined from PTFE.
Now we have to drill into the engine compartment six holes O 3 mm exit gases lifting charge engine, paste in the fuselage all the hooks, cover it with a thin layer of epoxy and install the guide ring O 6-8 mm. 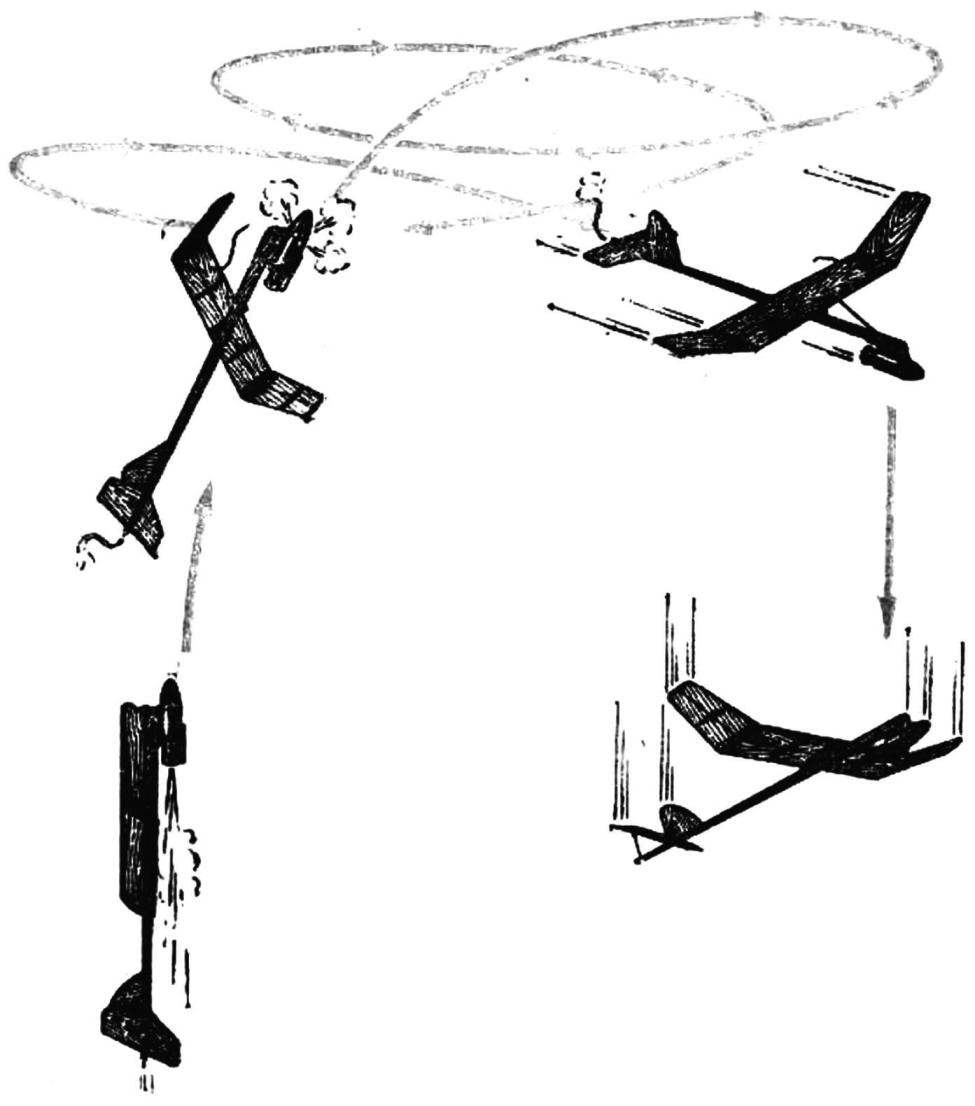 diagram of a flying model rocket.
The model is ready. Put all the rubber loop and attach to the hooks of the thread fixing the wing panel (folded position) and stabilizer. Check how disclosed wing. The tension of the rubber should provide a reliable trigger mechanism, but without a strong shot stopper on the fuselage.
After the final Assembly model, insert into the compartment exhaust engine and adjust the flight planning, downloading fairing compartment. Then you can start trial runs on the MPD. Correctly constructed and adjusted the model makes a vertical takeoff with a small rotation around its longitudinal axis. Rapid rotation and deviation from the vertical on the rise is evidence of improper installation in the engine compartment.
Starter device for starting rocket plane should have guide O 5-8 mm and a length of about 1.5 m. the Starting mass of the model with the motor MRD 20 — 10-4 — 100-110 G.
V. MINAKOV