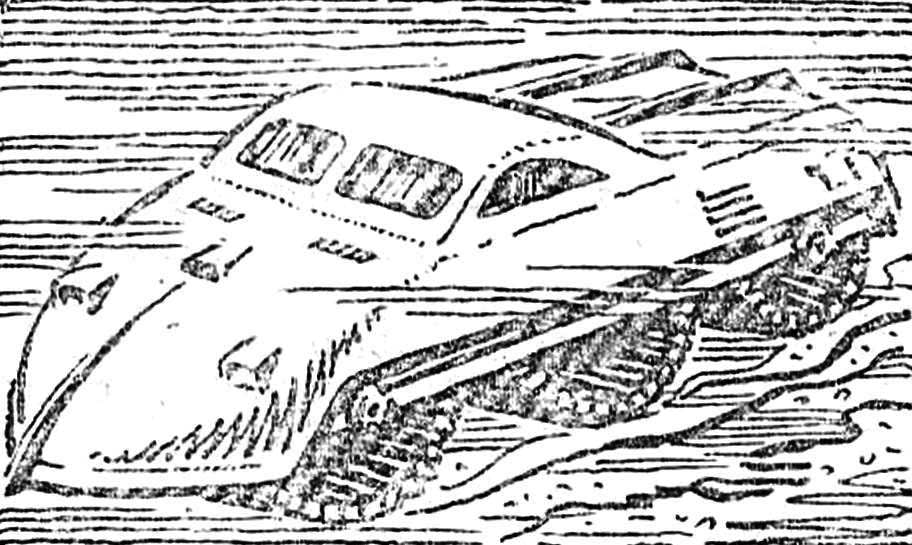 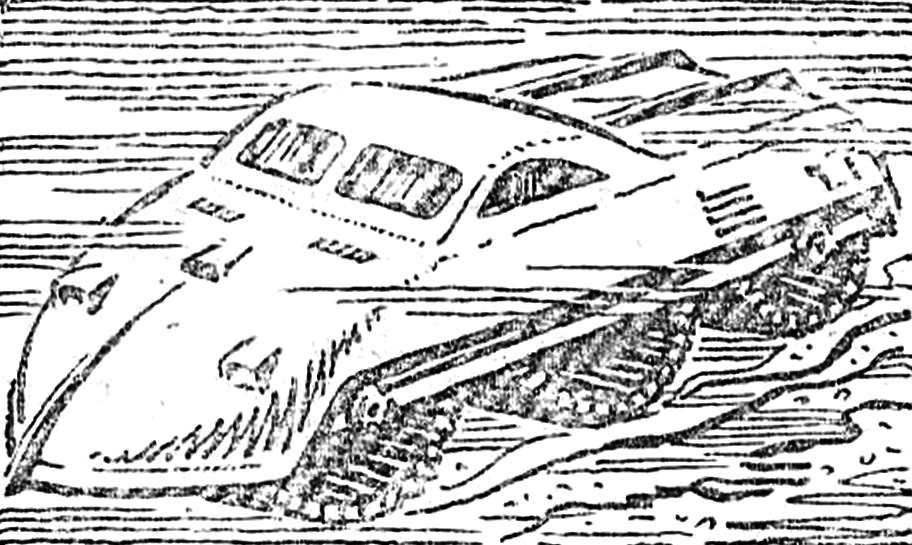 It is not similar to any of the existing transfer machines. Outside no wheels, caterpillars — not at all friction parts, gland seals. Only the bottom constituting an elastic pad, flexible: can be bent, forming a traveling wave. Wholehog designed and built by the Lipetsk engineer Yu. V. by Arpinum. Projection wanaheda given at different phases of movement. The kinematics of this machine are not very easy to understand. At first glance it seems that, even raised ka solid surface, it does not budge, no matter how much I ran her to the bottom of the wave. In fact it is not.
Consider the phase of one wave. When the apparent motion of every surface point of the bottom “inside” the waves are consistently in contact with corresponding points of the road. But the length of the part of the bottom, bent into the wave, the more distance between the neighboring peaks of pain, so the truck moves a distance equal to the difference between these lengths. And the motion will happen even without a sliding friction due to the unique rolling curved parts of the underbody to the road surface.
The direction of movement coincides with the direction of the apparent motion of the waves.
In order to calculate the speed of machine, this difference is multiplied by the frequency — number of oscillations that a wave makes in a unit of time.
Now imagine that the car hit the snow. The tops of the waves on the bottom will dig into the surface and sealed it. If the bottom begins to bend, creating a traveling wave, it will move towards its thumbprint in a Packed Nastia. Impact that contact with him are, for example, only the right sides of the waves, and the machine came up, lean on them. But the sides will slant, and the car will slide them down to match the waves of the bottom of her imprint in the snow. In this case, sleep will move fast, sliding the bottom through the snow, in the direction opposite to the apparent movement of the wave, and its speed will be equal to the wavelength (measured in a straight line], ka is multiplied by the frequency.
What would it be? On hard ground wholehog moves forward without slippage, soft (at the same character of bending of the bottom) — back with a slide. So, in all probability, it is possible to find ground solid enough for the first movement and insufficiently pliable for the second, where our car will not budge. To avoid this, the draft wanaheda you can create on the bottom of the waves of different lengths and shapes. By changing wavelengths on its right and left sides should be run and turns the car. (Simplified model, of course, would not have these properties.)
Go to the device model. The bottom of it made of strips of soft material, such as leatherette. To obtain the traveling wave uses two curved spirals that rotate synchronously in the same direction. To the bottom attach the wire clamps, each of which covers both propulsion. The spiral should not be very steep (the angle of helix of about 30°) and contain not less than two full turns. The distance between the propellers is not determined by their dimensions and can be chosen smaller, as both the Thai spokes mover are in the same phase and may partly enter into each other. The width of the brackets (and hence the ribbon) is equal to two radii of the spirals and the distance between them. 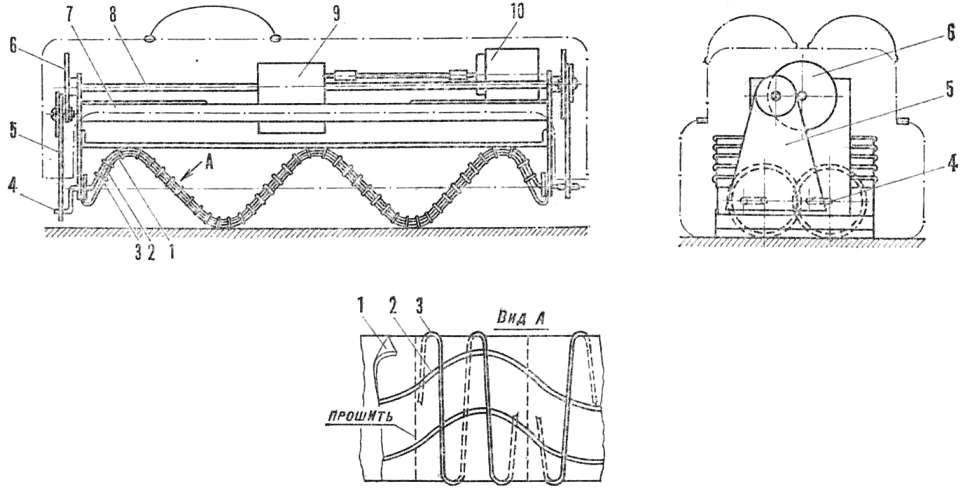 The model diagram wanaheda:
1 — elastic bottom, 2 — spoke-spiral, 3 — rail clip 4 — crank spiral, 5 — plank, 6 — crank shaft, 7 — frame, 8 — shaft, 9 — reducer, 10 — engine.
To drive the screw spindles in principle, suitable to any transfer, giving a rigid kinematic connection, — worm, gear, chain. But for the model it is easiest to use the crank. Arranged it so. At both ends of the helices are at an angle of 90° cranks. It is convenient to bend the same spokes. Above the bottom parallel to the axes of the propellers is connected to the drive gear shaft, which carries at the ends of the cranks with the same eccentricity, and also deployed at 90°. Cranks spirals and the shaft are connected by a pair of crank plates having openings for the entrance ends thereof. The location of the holes in the plates must exactly match the location of the axes of the propellers and shaft.
On the frame above the spokes are mounted support bracket, which do not allow them to SAG under the weight of the machine.
The propellers are made of stiff wire on the mandrel, at last apply:! Pinova line with the desired bend angle. The ends of the spiral should smoothly go to the center.
What are the advantages of the design wanaheda? Eye the possibility of complete sealing of the propeller. This property is very important for machines Rastogi, for example, in aggressive environments. You can use it for movement through the shifting bogs, to sand, even along the bottom of the sea. In the latter case, Vologod, rising to the surface, will be able to swim using the same engine.
S. ZHYTOMYR