It would seem, what could be better than a propeller! Decades he is the right person, moving a variety of the court, ranging from simple walking equiped to giant supertankers. Well-developed theory and calculation methods allow a precise adjustment of the screw to any of the designed ship.
But this is so widespread and well investigated propeller has a worthy opponents. This water jet, and propeller and vane propeller. And more recently, French inventors have proposed an unusual mechanism of hydropulser. Laboratory experiments showed that the thrust developed them, more than for the corresponding power of the propeller. There is no data on the use of hydropulser at high speeds, but the authors believe that in this he will not yield to “grandfather” the screw. In favor of the new invention is the fact that, in addition to the construction of the experimental boat at one of the enterprises of the company “Renault” is planned to manufacture the vessel with this device and an engine power of 300 kW.
What is hydropulser! It is a rectangular channel in which a vertically moving rod alternately pushes it to the top, to the bottom wall of the pterygoid plate. It is pivotally suspended at one third chord from the toe of the profile. In the rear part of the channel provided by the dampers, which protect from hard impact, and leading edge they are “stretched” over the entire length, thus performing the function of the seal.
Imagine now imagine that the wing, occupying the entire area of the horizontal cross section of the channel, pressed against his upper wall. The stock begins to push down. Due to the mismatch point suspension of the plate with its first mid will start to move away from the “ceiling” of the front edge. In the formed gap is sucked water. After the trailing edge separates from the upper wall, the wing moves down with a constant angle of attack relative to the incoming flow. Creates traction, depending on the attached to the stem of force and angle of attack. Then the front edge meets the bottom wall of the channel, and decreasing open back slit ejected water. Finally, the entire plate rests on the bottom surface. The stock begins to rise, and repeats the same cycle. 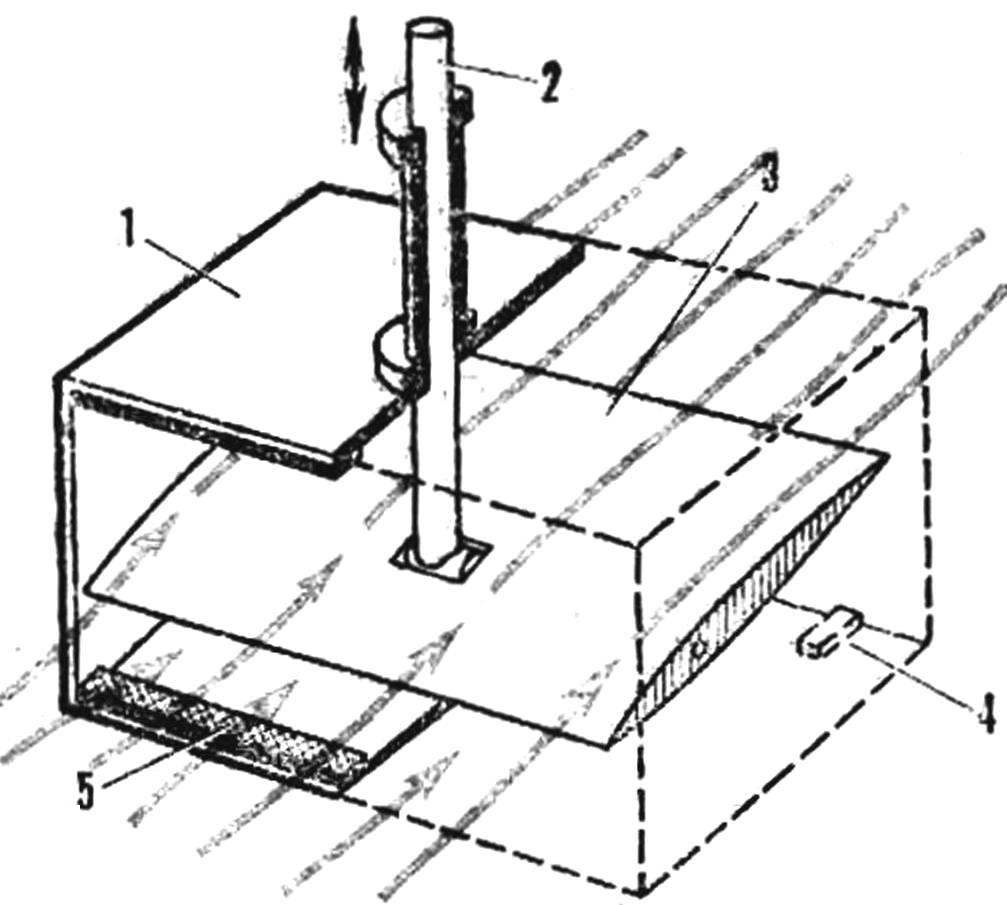 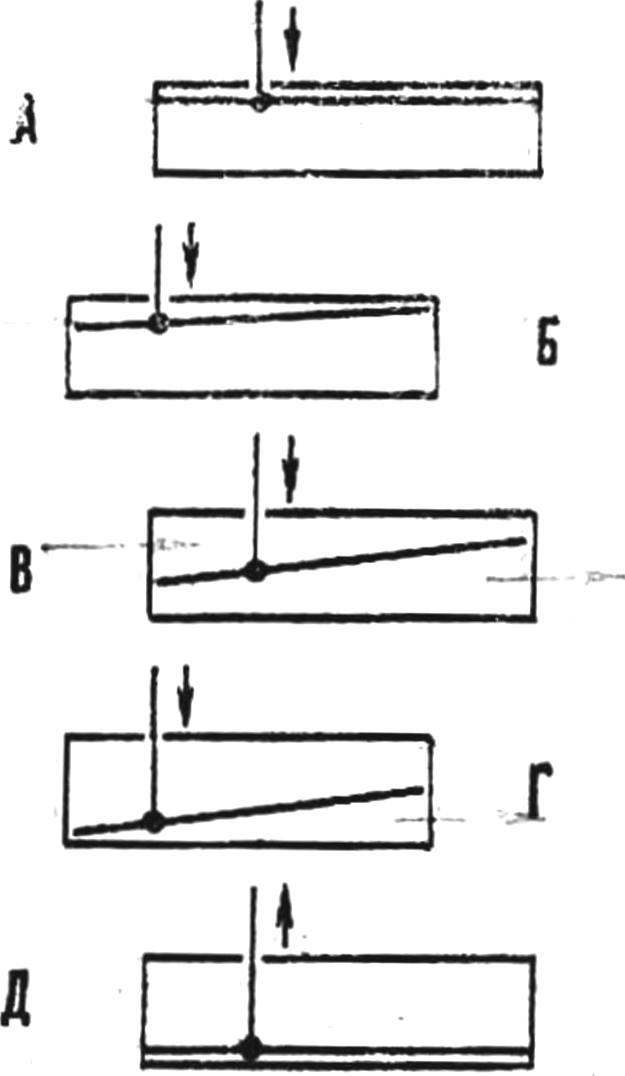 Fig. 2. Schematic diagram of the operation of hydropulser:
A — initial phase,
B — front edge of the wing departs from the wall of the channel and formed in the gap is sucked into the water
In — wing moves down, driving the water back,
Mr. wing leading edge rests on the wall of the channel and squeezes out of the cracks water
D — the final phase is also the beginning of the next cycle.
As can be seen from the description, the thrust is generated in each phase of the movement of the wing. There are two components: the thrust hydrodynamic, when entering into force the same laws as when the work of the propeller, and the thrust obtained by suction-ejection water volumetric pump “channel — wing”.
Note the height and area of the channel in comparison with the diameter and area of disc rotor. Because the height of the channel (diameter of screw) defines an important parameter — the draught of the vessel. It is clear that hydropulser may occupy the entire width of the stern. At the same the lees would need to put a few propellers, keeping the same cross section of the ejected jet of water. The advantage of the new device is the fact that it has a high adaptability, because you can change the wing area and the number without fundamental alterations of propulsion. From the ship’s own screws of this diameter the possibility of changing their parameters are much smaller.
And any designer or technologist will tell you that for the manufacture of hydropulser do not need such complicated and precise machines like propellers.
And from the point of view of safety of new propulsion, outwardly representing a fixed box, when you see him in the water takes much less trouble than a rotating propeller.
When maneuvering to change the direction of pull on the back you can use either a dipping deflector or turn the channel 180 or additional stock reverse, pressing if necessary, the rear edge of the wing to the bottom wall of the channel. The direction of movement of the vessel can be controlled in conventional steering wheel or turn the entire device to the desired angle around the vertical axis. It should be noted that hydropulser as opposed to the outboard motor allows for 360°. 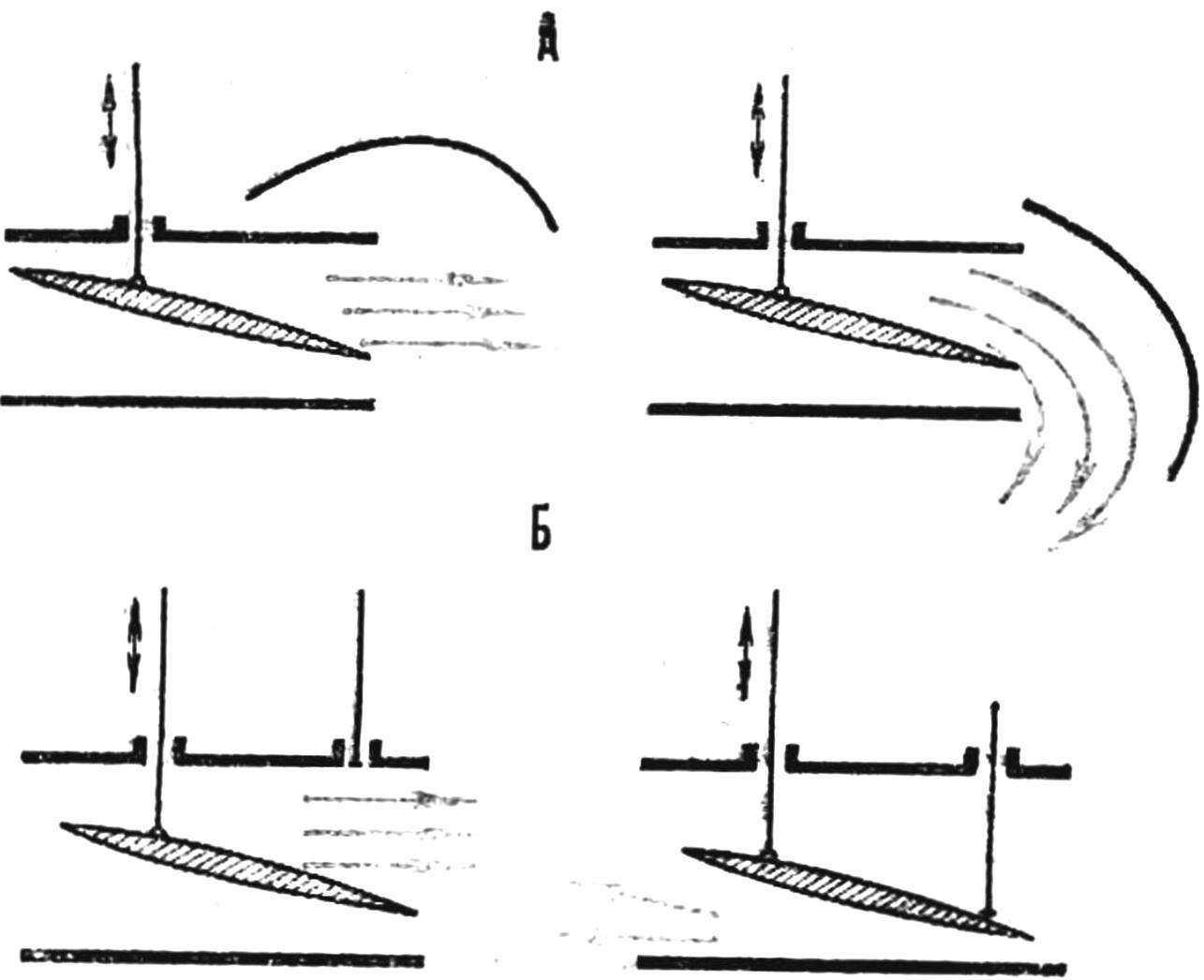 Fig. 3. Two ways of reversing thrust:
A — by descending deflector, B — with additional stock.

Fig. 4. Layout model boats with hydropulser:
1 — battery 2 — switch 3 — motor, 4-reducer, 5 — crank mechanism 6 — hydropulser, 7 — rudder.
On models you can recommend the drive from the internal combustion engine or an electric motor with the connecting rod coupled to the rod. At small dimensions of the wing easier to do without the gearbox. Very well linked unit with a piston steam engine. In this case there is no need for the introduction of connecting links: the piston steam engine is rigidly mounted to the stem.
Those who are interested in this article, I advise you to think about what type of ship would be most appropriate for installation on it of the device described. Maybe a catamaran? You can use the full overall width of the vehicle, and the inlet channel will not be going ahead satanarsa body.
If you build a working model with motor type “hydropulser”, please contact us. All readers will be interested to know the results of your experiment.
V. IVANOV