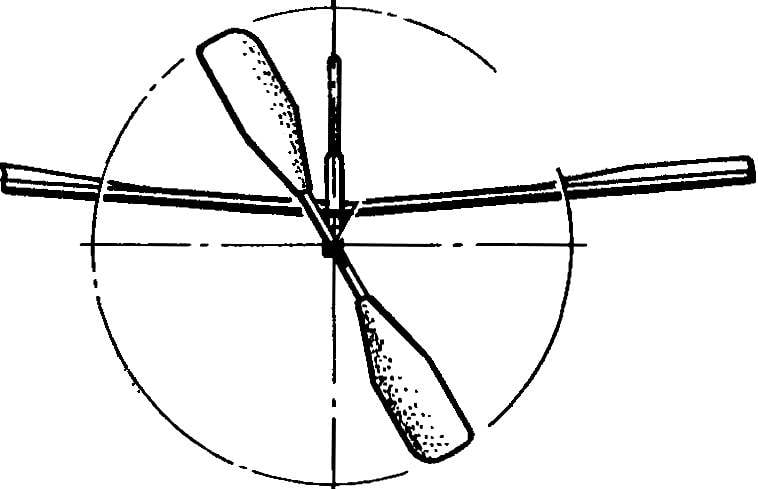 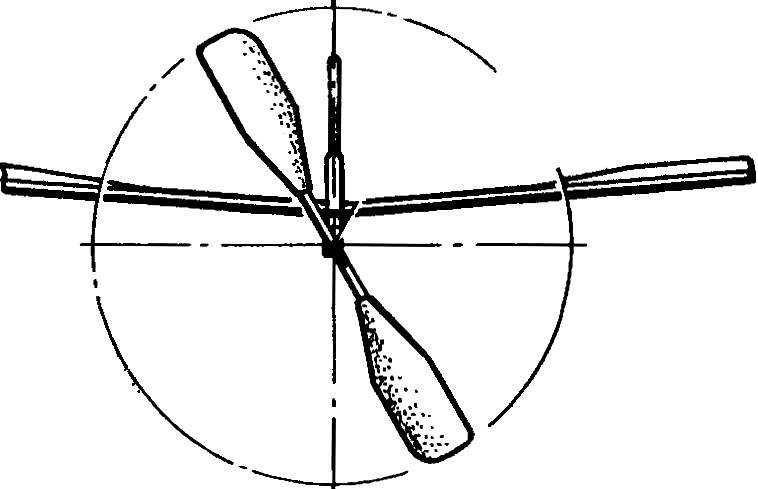 “It’s been fifty years since I work as the head of the aeromodelling circle in syut. Now faced With great difficulties: no aeromodelling materials; if the sets and be available, by type of disgusting quality, and made models don’t fly. Students were little interested in the sport. Beginners have the patience just at the beginning of the construction of a complex model…”
Hand on heart, I have to admit that at least every second letter echoes these words of Nikolai Chesnokov, head of the circle from the city of Pavlovsky Posad, Moscow region. And if the situation not far from the capital, threatening in the Outback is disastrous. The list of shortcomings and “sores” mass youth models could continue not only the head, but any boy-athlete (and the list would take more than one typewritten page).
However, a rare letter carries, in addition to complaints, and constructive offer, real for today. One of the solutions (or rather, attempt to solve) the problem of retention of the boys in the circle gives N. A. Chesnokov. He believes that the presence of the foam makes sense to offer beginners the sliced workpiece and the drawings of small extra-curricular models with a span of about half a meter. The production of microplanar the student leaves, usually not more than four hours of time. And then… — interschool Olympics city on simplest model airplanes!
Thus the boys through the undeniable appeal of the sport gravitate to the exciting world of modeling, not having time to cool off because of the semi-annual expectations of the first start.
For those who have access to the foam, we recommend you to try to go on the proposed route. As good examples of simple foam models give and describe the two UAV-unmanned aerial vehicle, developed in the city of Votkinsk (Udmurtiya) under the leadership of Anatoly Chirkov. He designed a series of such models for beginners presented by the drawings-posters seven very entertaining foam machines. In Udmurtia most clubs works with first came a bunch of ideas Chirkov. Enthusiast foam aircraft proposes to include devices that are created in the first year of study, the program of events of the lower and middle rank.
So, first we offer two of the simplest model, developed by A. Chirkov. The first of them
Glider-plane
The main parts are made of a foam type PS-4-40 threaded on Thermaltake on plates of different thickness. From these blanks and cut out the wing, pylon, stabilizer and keel of the propeller blade. The edges of all parts with sand paper rounded. The airfoil is a flat plate. However, more experienced boys may be invited to outformat of the workpiece to obtain a profile of the “curved plate” — the material retains the shape after a small deformation, and the wing as a whole will be more rigid.
The fuselage of the model — grained pine with a cross section of 4×4 mm. the tail section smoothly decreases to 1,5×1,5 mm., the Assembly of components is performed on the PVA glue or stationery. When mounting planes it is necessary to monitor the correctness of their mutual position and installation angles of attack. 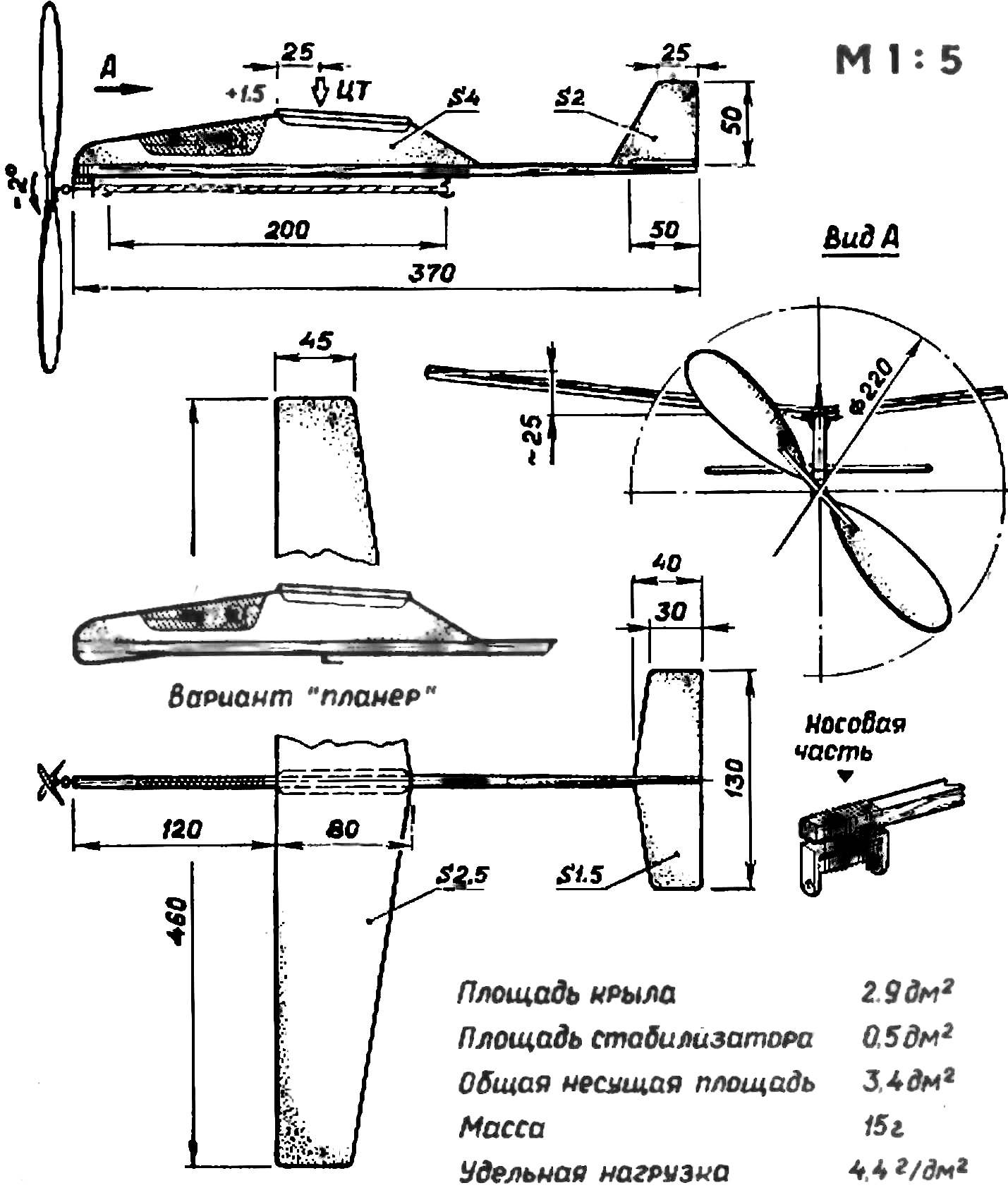 Small model “glider-aircraft”.
The place of the docking pylon with the wing reinforced corners wetmanski paper, and the sides of the pylon or decorated with stickers of the cockpit, or the contour of the cab proschatsya through, and inside the plate is a flat imitation of the pilot. At the front end of the fuselage rail with a wooden liner 4x6x9 mm is mounted a U-shaped shaft bearing propeller. The bearing material is a thick sheet or sheet iron. The screw shaft is bent from a rigid wire Ø 1 mm. For ease of rotation on the shaft put a set of washers or put a glass bead, a nail bent to the front end strapped with adhesive rail — the hub of the propeller. The finished blade is glued to the hub at an angle of 35 — 40°. Rear hook for the rubber motor provided with the standard pin.
Without wound motor this model can not run because it is equipped with a screw of large diameter with wide blades and has considerable drag. The weight of the model should not exceed 15 g. a Properly made and adjusted, it is able to fly about 50 m altitude up to 7-8 meters. The alignment indicated on the drawing, is achieved by loading with pieces of lead, and the adjustment is carried out by folding the edges of the stabilizer and change the installation angle of the shaft of the propeller. The rubber motor consists of four strands of rubber with a diameter of 2×1 mm. If you want more, when you build this model you can lay as a glider: in this embodiment, instead of the bearing screw is a balancing weight.
A similar structure has

Dwell on the peculiarities of its construction makes no sense, as all the work is very close to the glider plane. Therefore, introduce only the characteristics and adjustment of the apparatus.
After drying, the glue that holds the propeller blade on the hub at an angle of 35 — 40°, the ends of the blades spin in the opposite direction by 7-10° — this will improve the efficiency of the propeller. By the way, as in the first model, it is useful for strength paste over the area of intersection of each blade with the hub by a thin paper. 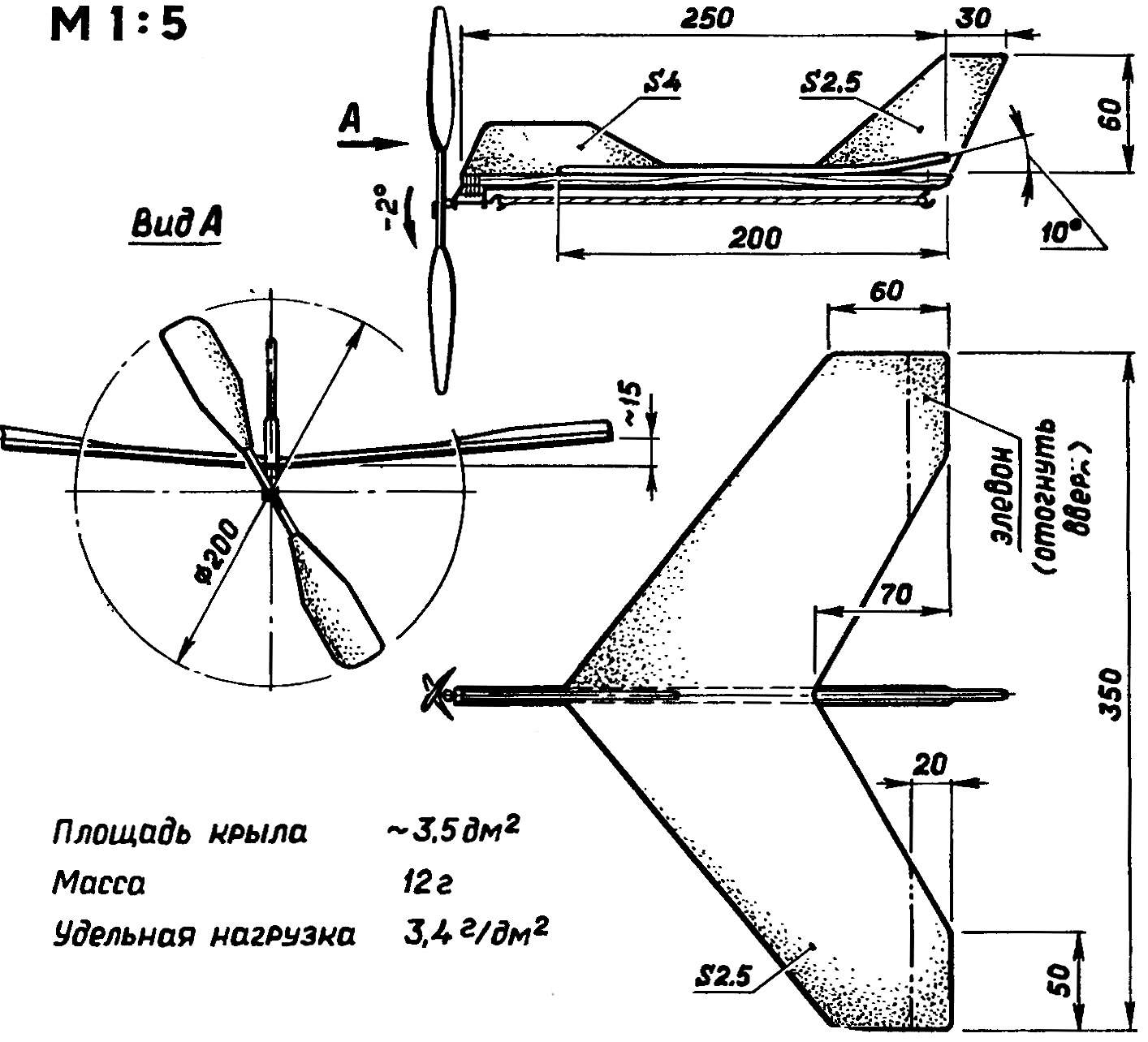 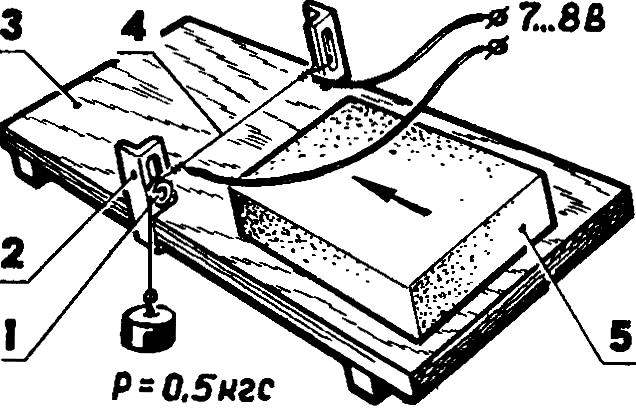 The blade of the propeller.
Adjustment begins with trial runs with a twist of the rubber motor, composed of four strands of rubber, 2×1 mm, 50 revs. The stability of flight provided by the ACC raised edges of the end parts of the wing. Carefully executed and well-adjusted model flies a distance of 25 m.

The next step could be a sport model school class A1, designed by N. Garlic. For those who mastered the production of simple machines, the complexity is not present any.
The fuselage of the airframe is made of Reiki-section 10×13 mm, refined to the tail to 6×8 mm. the bow of vystragivaetsja from Linden or aspen and is attached to the rail. Under the removable, fastened with rubber bands, the wing to the front of the fuselage is glued to the support rack and the frame. Tail selenoproteome — a stabilizer in the center front part is strengthened with bamboo. 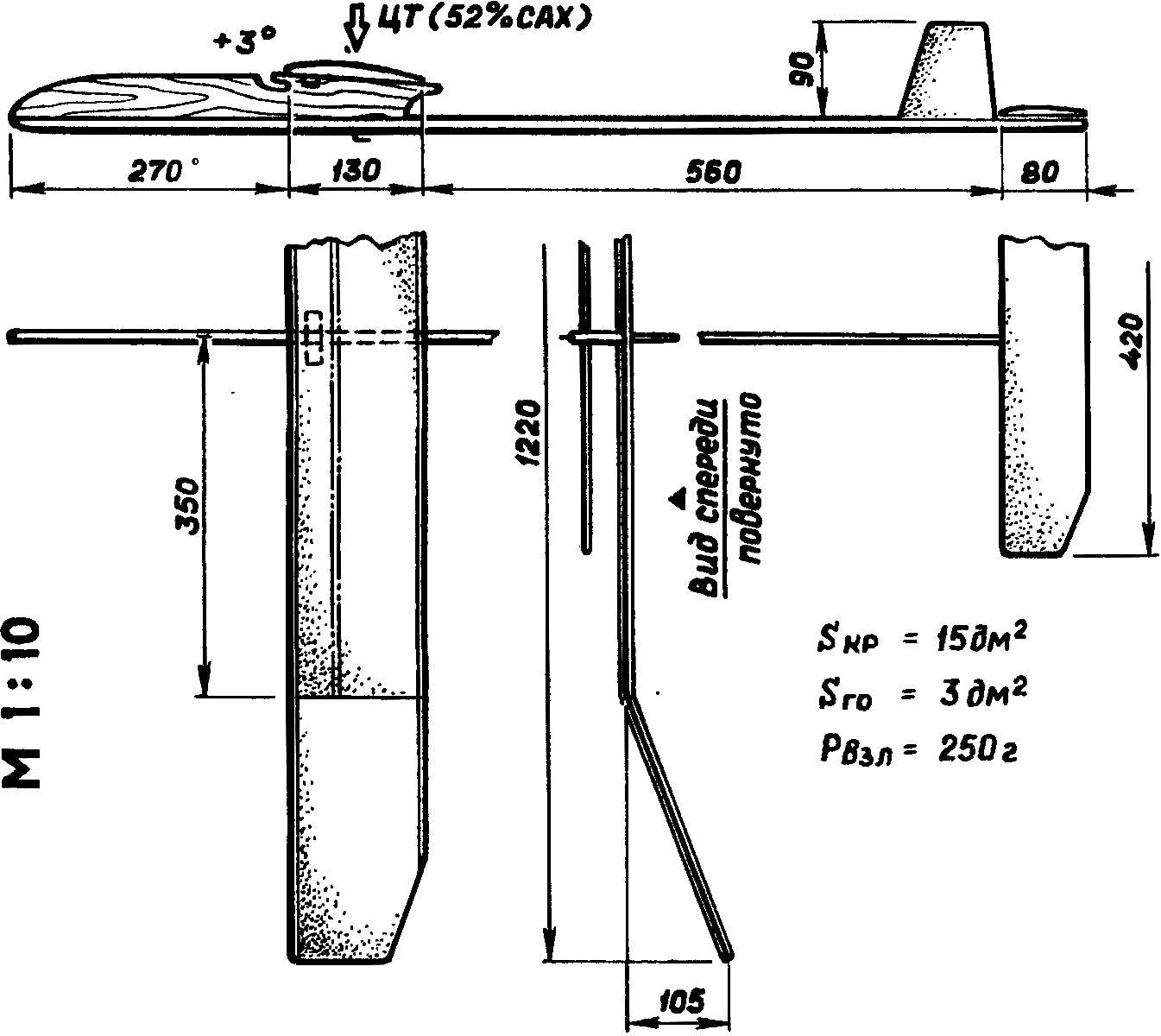 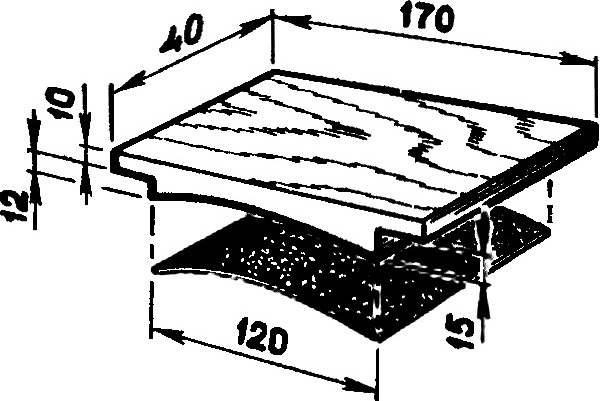 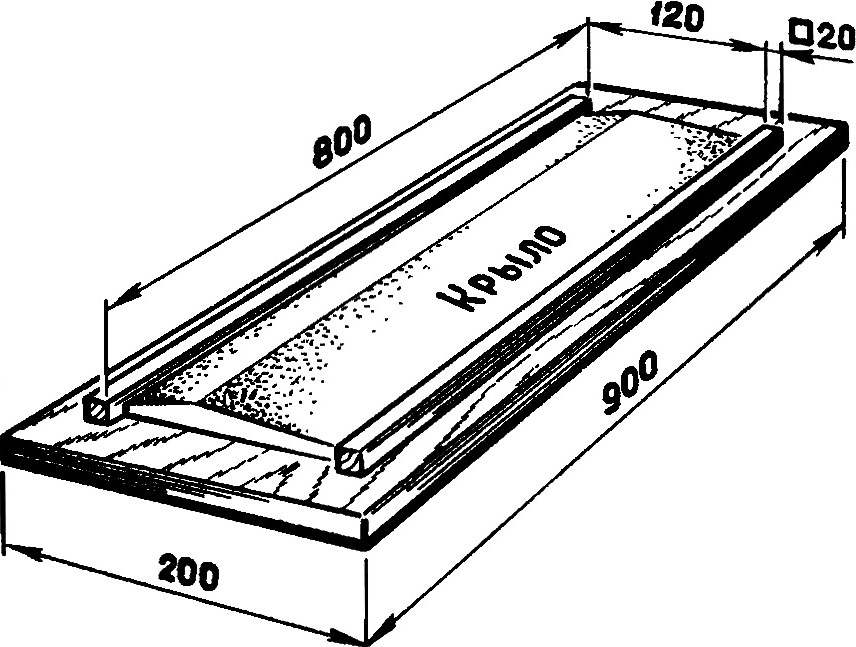 Device for profiling the workpiece of the wing.

Profiles sports model glider.
The top profile of the stabilizer; bottom — the wing profile, which is superimposed on the section of the billet with straight form.
Billet Polupanova wing cut from foam. Profile rhombus-shaped blanks shown in the drawings, as the device, which is the final Dobrovelichkovka. By the way: if desired, a similar method can be processed and the underside of the wing to get more carries convexo-concave profile (under the back edge of it is useful to enclose the rack 8 mm thickness). “Kurilka” need two with sandpaper of different grits. Edge of the wing WuxiLena pine or lime strips, which are on the axis of symmetry of the model a little saws to securely hold the planes by the pressing force of the rubber. If possible applications of this model in windy weather, it is useful in the upper surface of the foam centerplan to embed and seal the pine rail-the spar section of about 3×5 mm. This addition would dramatically increase the rigidity of the wing in bending, as it formed a kind of transferencia farm of three strips (both edges and longitudinal), bonded foam.