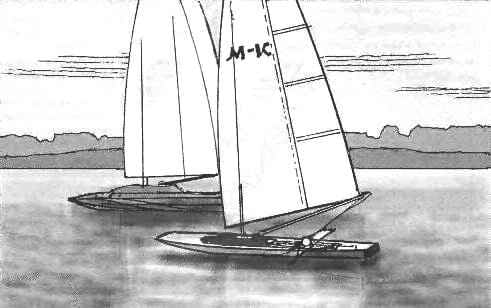 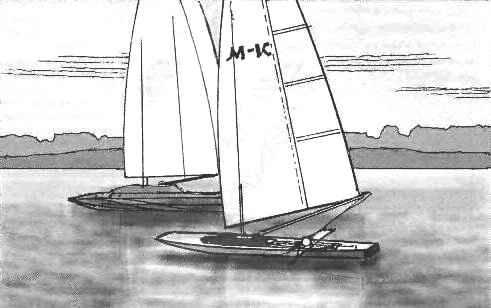 Speed radioact with a sail-wing. Competitions of radio controlled model yachts are one of the most exciting. Silent glide of sailboats on the smooth surface of the pond, clearly they can perform turns and maneuvers gives the audience the illusion of a real sailing regatta. And being a full sailing gear, becoming a member of these competitions, you just — you just take a radio controlled model yacht that is not too difficult, although the work is — for neat and patient.
The present model refers to the number of high-speed, which helps the body with not “yacht”, but rather with the “boat” lines and unusual sailing rig, formally consisting of a profiled mast and relatively small sail, which from the point of view of aerodynamics collectively represent a wing with a symmetrical profile, with flexible flap.

To begin with suggest making a model. Best applied to the wall it of fiberglass on the disc; the latter can be made of plywood and foam.

Plywood with thickness 3 — 4 mm need for patterns cross sections of the hull, which are cut from it using a jigsaw according to the theoretical design. Well, the foam sticks are designed to fill gaps between patterns, the thickness should correspond to the distances between cross-sections minus the thickness of the plywood.

Further, foam and plywood multilayered glued “big Mac”, in which veneer layers are interspersed with foam. Focusing on the contours of the plywood templates to the foam using astrosatchel-tion of knives and coarse-grained skin adjusted to the shape corresponding to the theoretical drawing, after which the workpiece is cemented (best to use two-component autosplice — it quickly solidifies and can be easily processed), and then vyshkurivaetsya.

The finished disc is painted in several passes by the enamel polishing with intermediate layers, and at the end applied to the surface of the separation layer parquet paste, or dissolved in gasoline wax and raspolirovyvayut.

Vileika case is made using fiberglass and epoxy binder; to education are rather hard shell it will take three to five layers of fabric, depending on its thickness. Epoxy resin is mixed with hardener in accordance with the instructions to this binder. 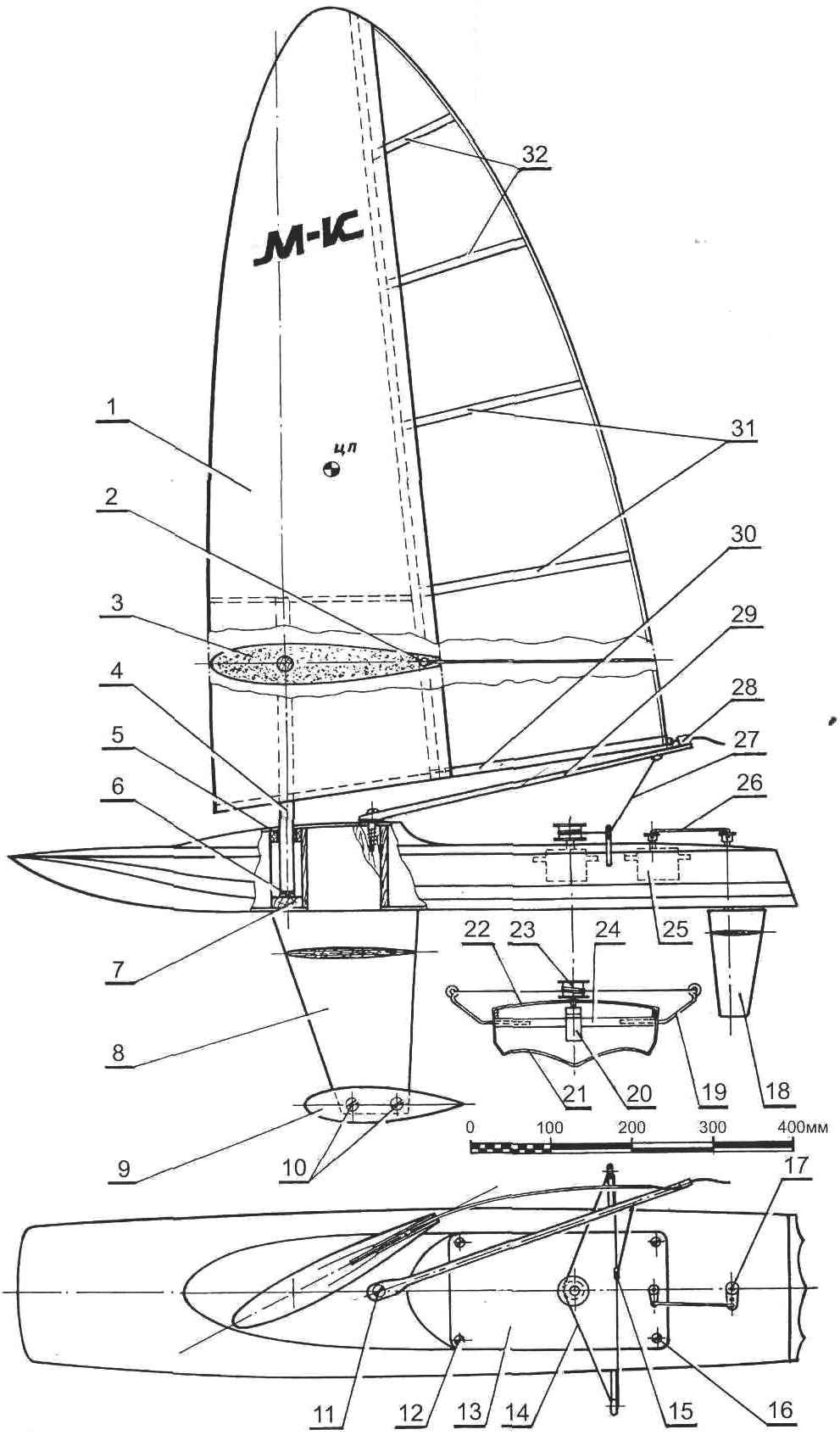 After curing of the resin sheath is removed from the blanks, it cut off the excess material, and the inside with gasoline washed off the remnants of the wax of the separation layer. Further, in the case of using the same “epoxy” glue some plywood frames — the number depends on the shell thickness and, consequently, its rigidity; it is less than rigid, the more need for her frames. Practice shows that it will take most of those frames by which the body will fasten the plywood base for the servos, battery and receiver remote control equipment.

In addition to frames, you will also need longitudinal reinforcement — a pair of deck stringers made of pine strips section mm. 5×15 With a body they connect also with epoxy glue.

Deck radioacti wikiepedia also of fiberglass. In the manufacture of blanks for forming it is necessary to consider that the finished deck should have a flare for turning her in some kind of cover to the housing. By the way, make a blank from a flat Board, since the deck has a slight curvature. Convex detail, reminiscent of a cabin, can be cut out separately and fixed to the mast with glue.

The finished hull and deck viscaria are, podsalivaya and painted two or three coats of enamel with intermediate grinding them.

Quite complex it may be for yachtsman-Modeler manufacturer of sailing arms. As already mentioned, it consists of a profiled rotatable mast (wing) and the sails (flexible flaps).

Mast (wing) — composite construction, it consists of a core (melkosortnyj packing foam), covered with one layer of fiberglass using epoxy resin. The profile of the mast is symmetrical, with a relative thickness of about 18 percent. The trailing edge of the mast has a so-called lik-groove designed for mounting to the wing sail. Sheath the face of the-groove is formed separately, before gluing the foam core fiberglass — this wood glued to the core (the model), a section of which conforms to the shape of the face-groove. Further, the rod should be carefully covered with tape-the tape that serves as separating layer, and then on top of the tape reformulate two layers of fiberglass. After curing of the binder shell lik-groove should be separated from the stem, and the finished part mounted on the aft edge of the mast with epoxy putty, and then the surface roughness in the area of the rear edge to seal the foam pieces. After covering the core with fiberglass, the resulting mast vyshkurivaetsya and painted two or three coats of enamel.

Sail (aka flap) is easiest to cut out of the Mylar film with a thickness of 0.05 — 0.06 mm (this is usually used with flower sellers for packaging). To the front edge (the leech) with adhesive tape-adhesive tape is cut clothesline in the plastic shell — the sail is securely fixed in the face-groove of the mast.

Sail equipped with five battens — flexible plastic strips. Four of them are about 1 mm thick, glued to the film flag using strips of tape. The lower (fifth) Lata cut from plastic with a thickness of about 2 mm; in the rear part of the lower battens is fixed brace — cut durable nylon cord, with which the sail is fixed to the boom. 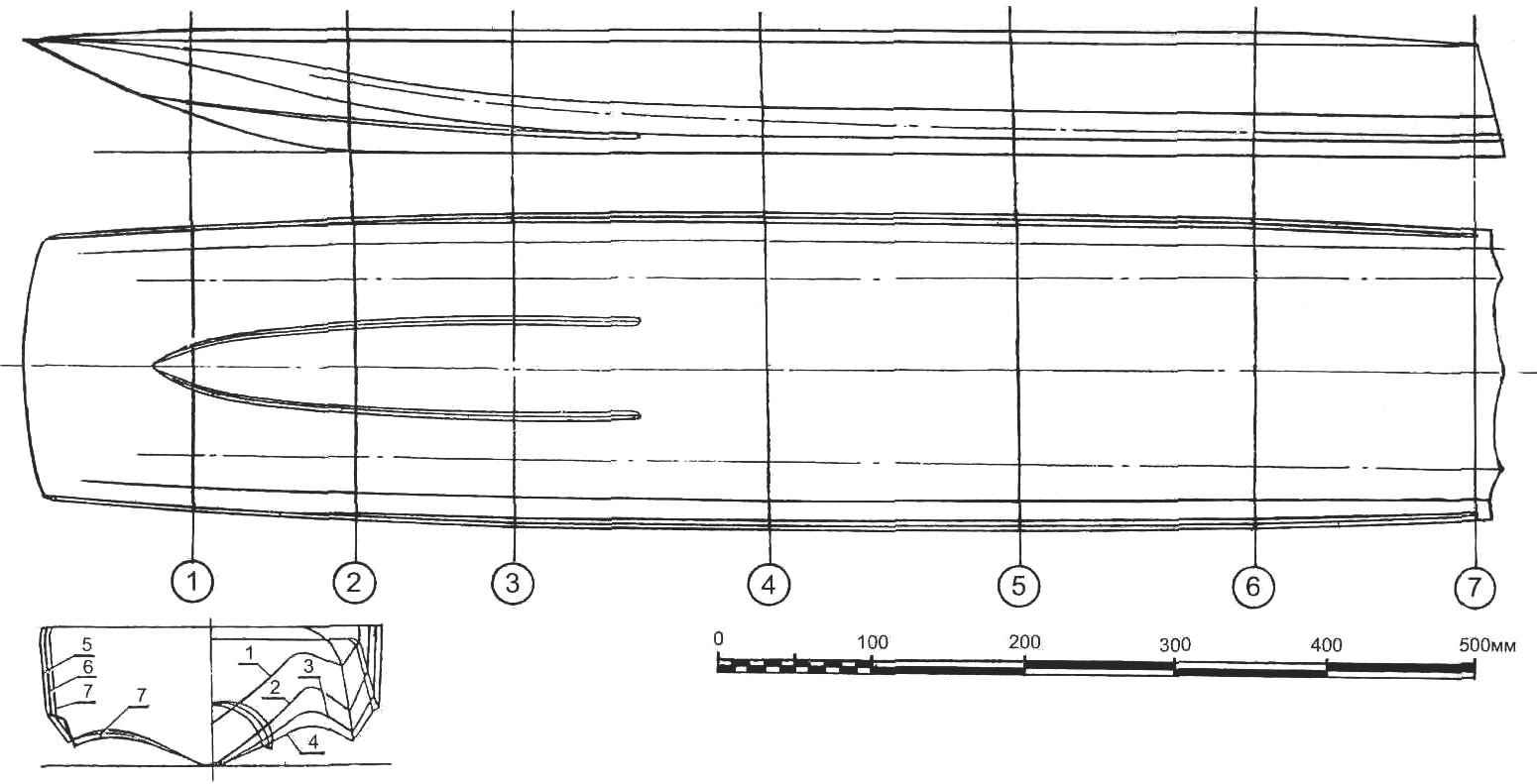 The theoretical drawing of the hull radio controlled yachts

Mast (wing) mounted in the hull is hinged and is equipped with the axle of solid wood — beech or oak with a diameter of 18 mm that can be rotated in two joints — one of them, which is a plastic bushing, located on the crossmember below the deck, and the second, made from a clothing snap button, in the lower crossmember. Button not only allows the wing to rotate about a vertical axis, but also fixes it to the seat. This design makes it easy to install and dismantle the mast.

Keel radioacti cut from plywood, its thickness in the root cross section — 10 mm. the Profile of the longitudinal section of the fin are symmetrical, wing-shaped, with a rounded front and pointed rear edge. At the bottom of the fixed keel bulb — the ballast weight is a streamlined, teardrop-shaped, cast in lead in a plaster mold; the approximate dimensions of this part: length — 190 mm diameter — 45 mm. the mold — separable, consisting of two parts, made on a wooden model.

Steering the pen is also plywood, its thickness at the root section is 6 mm. the rudder is a steel pin; on one side of pre-cut M4 thread. By the way, the rudder is mounted in the hole of the steering of the pen with epoxy glue, thread also allows you to more securely connect these parts. The other (upper) side of the rudder using miniature pins are fixed steering arm. For the rudder provides vertical hinge, kind of a well of a plastic tube passing through the bottom and the deck of the yacht. This design eliminates the need for seals at the absolute tightness of such a joint.

The remote control system radioacti includes a receiver, battery, and two servos — one of them has an actuator for steering the pen, and made on the basis of the second sheet winch. Modification of the cars was to replace the lever actuating mechanism drum with a diameter of 20 mm.

Well, to determine the center of the sail can be a purely geometrically — aerodynamics say that the focus of the wing (center of application of aerodynamic forces) is the point located at a distance of 25 percent of sock the mean aerodynamic chord of the wing, as shown in the General shape of a boat.

Now, if the remote control equipment in order to test radioact on the go. It is necessary to warn that to sail a model on the radio no easier than this yacht, so for the first workout it makes sense to choose a weather with even moderate wind and not too large indoor pond. To get started, try to hold radioact course galfvind when the wind blows perpendicular to the DP of the sailboat; the sail must be rejected from the DP at an angle of about 45 degrees. Then, with increasing speed of the boat will have to pick up the sail as it increases apparent speed and decreases the angle of the sails relative to the wind direction.

Securing skills in the first exercise, you will soon be able to master steep and full courses, rotations, as well as driving the models towards the wind to running downwind, in General, will operate a model no worse than experienced sailing a yacht. A fair wind and seven feet under the keel!