Soviet reclosability successfully performed at the VI world championship in the Bulgarian city of Yambol. The Champions were the two athletes from the national team of the USSR — A. Koryakin in class S1A, and V. Kuzmin in the class S4B. Three medals in S. ilina, won prizes in competitions in classes S1A, S4B and S5C (second, second and third places respectively). In the class S6A “bronze” was won by the Soviet modelist Yu. a. Firsov.It should be noted that the model A. Koryakina, reached the height of 778 m at the start of class, S1A, allowed him to become not only a champion but also a world record.
Model rocket modeling class Ѕ4В V. Kuzmin
Models raketoplana this scheme, the athlete speaks for about five years. And all this time, Kuzmin showed excellent results at the all-Union and international competitions.
The missile airframe is made on a Delta wing (the wing”, rogallo”) with slats and resembles the model of the well-known Moscow sportsman E. Chistova. Differs from it in that the slat is attached at one point on the Central beam. The rocket also Chistova this item is hung on the side members. 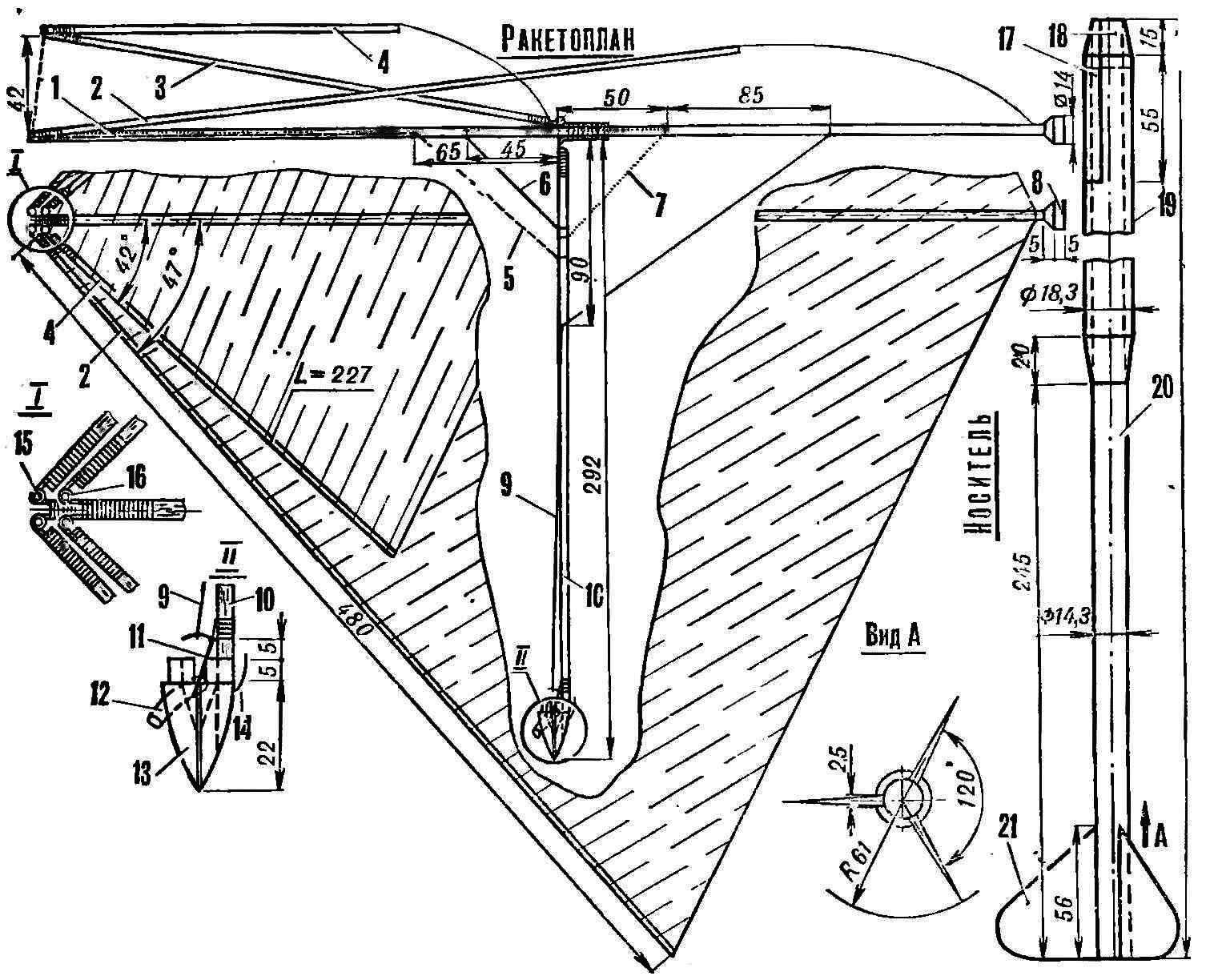 1 — rack-fuselage (pine), 2 — side beam (pine), 3 — Central beam slat (white), 4 — side slat beam
(pine) 5 — pull deflection of the balance bar to translate the model into a dive (rubber and regular threads), 6 — thread-limiter, 7 — stop angle of the slat that goes through parts 1, 15 to a part 16 (thread), 8 — wad tail (balsa),9 — thrust-limiter installing the balancer (rubber and ordinary thread),10 — rack-balancer (pine), 11 — movable hook (OBC d 0.5 mm), 12 — wick 13 — fairing (balsa), 14 — locking folds of the parachute compartment (OBC d of 0.8 mm) 15 — spring hinge wing (OVS d 0.6 mm), 16 — spring hinge slat (OBC d 0.6 mm), 17 — fold the parachute otseka, 18 — adapter (balsa), 19, and 20 parts of the carrier rocket plane (GRP), 21 — stabilizer (balsa).
The Central beam of the wing length 495 mm pine rail section 4X4 mm. In front of it with thread and glue fixed to the spring hinge, bent of steel wire d 0,6 mm. To the free ends of the hinge attached side beams length 480 mm with variable cross section (highest — 4X3,5 mm). In the Central beam of the wing at a distance of 250 mm from the bow on the top and bottom are mounted two hinges, of which the upper spring. To it is attached the Central beam slat (pine rail cross-section 3X3 mm). Its free end carries a spring-loaded hinge attachment of the side members of the slat of variable cross section.
The lower hinge of the Central beam of the wing — hinge. With his help, establish a rail-balancer load-bearing fairing with wick device and the locking folds of the parachute compartment.
Directly wing and slat is a Mylar film with a thickness of 20 µm. Adjustment of gliding flight is made by changing the installation angle of the slat relative to the wing (when the elongation or shortening of the filament of the limiter) or by changing the installation angle of the Reiki balancer (selection of the length of the limiter 6). The transition to the forced landing is as follows: after triggering of a wick device is released the thrust-limiter Reiki balancer, the latter is deflected forward, translating the model into a dive. The mass of the rocket 13.
The carrier (container), which fits the “glider” for a start, represents up GRP d of 14.3 mm and a length of 690 mm. In its upper part (solely to bring the model into conformity with the requirements of the rules of the competition) pasted another tube d 18.3 mm length 410 mm. At the joints of pipes installed the balsa adapter. In the head part of the container for the wing is a parachute compartment in the cavity of which is placed a brake band. As soon as after lift-off rocket is fired, the latch releases Golosnoy fairing flap compartment, thus freeing the brake band for safe descent of the carrier. 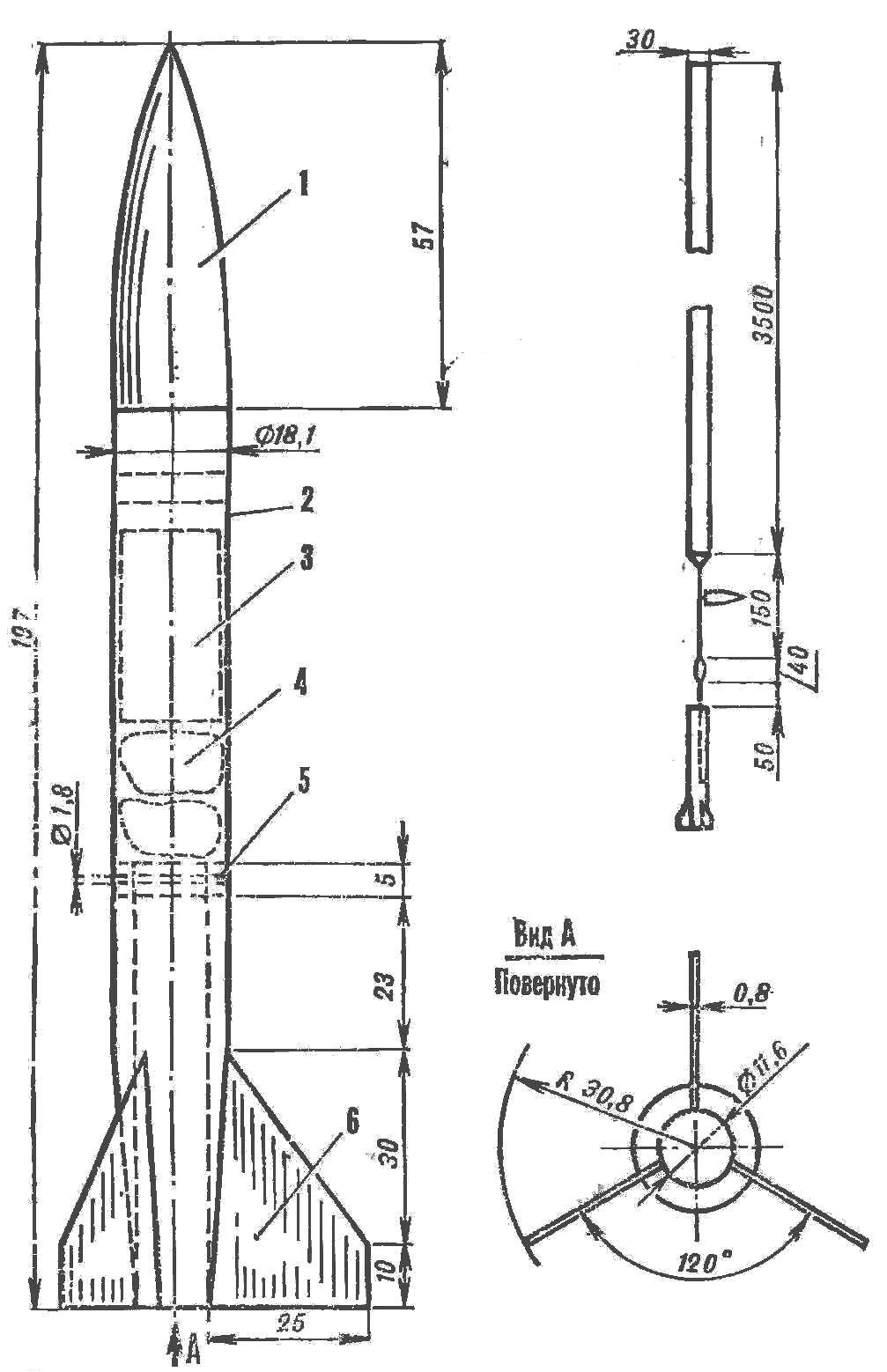 1— fairing, 2 — body, 3 — brake band, 4 — wad, 5 — frame, 6 — stabilizer.
The stabilizers of the container — shaped cut balsa blanks with a thickness of 2.5 mm, the side surfaces are reinforced with thin fiberglass. The mass of the carrier 15
A housing with a tapered aft molded and fiberglass on the mandrel d to 17.6 mm. Inside the enclosure at a distance of 63 mm from the lower edge glued balsa frame with a thickness of 5 mm, which are drilled overstep d of 1.8 mm for pin fixing engine.
Stabilizers models carved from balsa plate thickness of 0.7 mm. the lateral side reinforced with thin fiberglass. Fairing as the body, molded from fiberglass.
The mass of the model without MRD and the brake band is 3.5 G.
Guide rings model does not and starts with a special launcher. Brake band long length — 3500 mm — provides a good observation of the descent. Tape material — Mylar film with thickness of 0.012 mm.
V. HOLGUIN