Is there any reason to go into specifics slip “school” model, results of which did not even contain the cells in the table of records! If you think about the future, that is. Today we record events are not logged, tomorrow, and the theory of sliding automodelisme not yet developed by anyone, although microcontrolle subject to the General laws of physics.
In principle, a small resistance movement of the skates on the ice track is due to the formation of a water film lubrication, the resulting high specific pressure on the ice running knife-like end. This is true in ideal conditions, when the track had just bathed and ironed, there is no snow and “cereals”. And the air temperature must be within certain limits otherwise, to create a reliable water film will need to change the width of the skate by increasing or decreasing the specific pressure on the ice. After all, if the water under the “knife” is small, the friction will be greater, as the skate will go directly on the ice without lubrication, if a lot of water will be squeezed from under the ridge, the friction will increase again. In terms of competition, the skates and lose his main advantage: the ability perfectly to keep the course, since the position of the model during a race completely {or almost completely) determine a stretched cord thread.
Another thing — skiing. Remember a good design snowmobile-glider KB A. N. Tupolev (see “M-K” № 11, 1978). Excellent running characteristics give it an unusual hull lines-ski, which is on track stands on not just snow and water but the air that serves as a kind of lubricant. How much easier it is to move the car on a “pillow”! There is another argument in favor of a return to skiing. Long measured the coefficients of friction of different materials on snow and ice, you know, how best to cover the sole. Therefore it is reasonable to use the results of the calculations, making the design search to the blind selection of skate sizes and materials for their manufacture.
Try to imagine what is supposed to be the device that fully meets the name “snowmobile”! Just before that it is necessary to note another factor. Is the weight of the machine, interconnected with its size. The models now are made on the basis of the representations autostructure. They forget that the gym has become one fulcrum has evolved into a wingless aircraft, obeying the laws of aerodynamics in issues such as resistance and stability the provisions of the “fuselage” (remember the one-point stabilizer of the model schema). The laws say that the smaller the total surface of the body (especially exposed to the jet from the propeller engine), the lower resistance value and higher speed. Conclusion: the smaller the unit the better (of course, while maintaining the fidelity forms). It is fully in line with the requirement of low weight defining and small resistance to movement of the ski with a very light weight model, just touching the surface of the track. And to do a small car easier! Some will object that it was too unusual design, but… Invite the skeptic to look at modern sports racing aeromodel, now familiar, “through the eyes of an outside observer”. 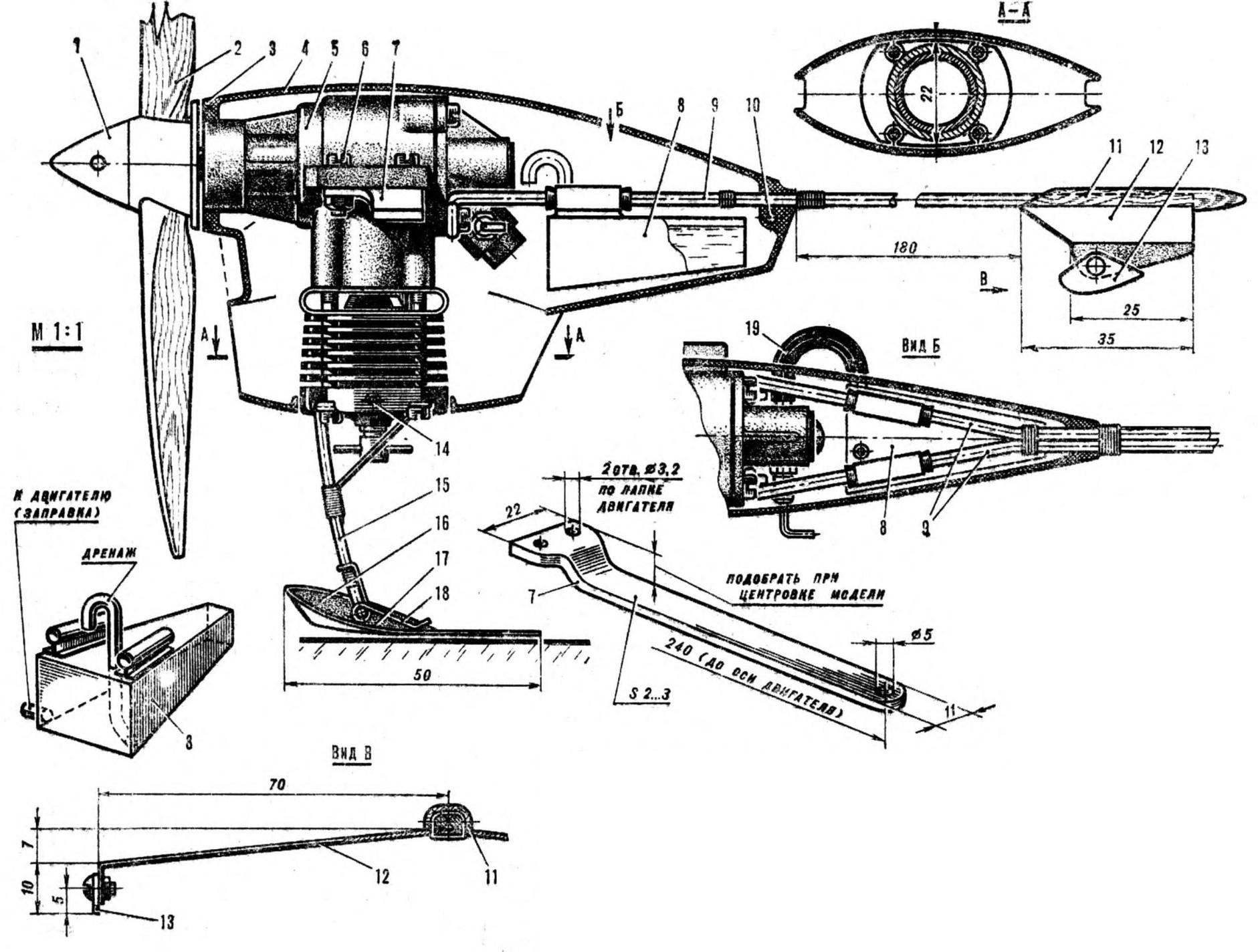 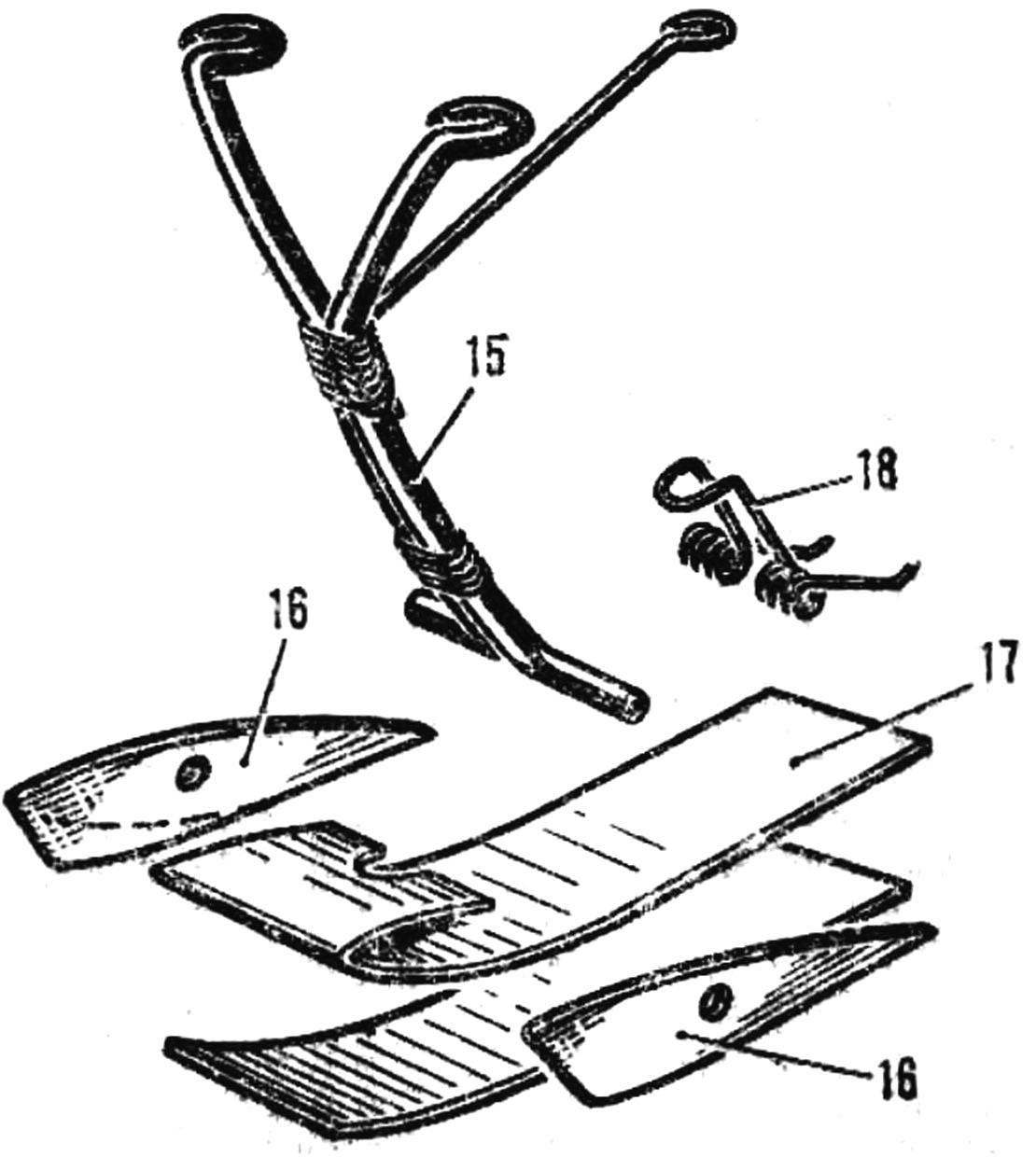 The design of the landing gear and skis.
So, we begin to build! Look at the drawings. You will not find the usual element of the structure of the motor. The model is so simple and easy that all of its constituent nodes, and only two of them, mounted directly on the massive Carter and the head of the motor. This technique allows to reduce the weight of snowmobiles, which as we have said, it is necessary to reduce the friction of skis.
One of the nodes design — tail. It is the Foundation of claw beam, bent two pieces of wire OVS Ø 2,5 mm. Wrapped them with thin copper wire, probajte seams with acid and wash the beam in the soda solution. The front ends unfold and navathe pliers on the loop for which the beam is attached extra long bolts to the crankcase. To the rear part “sew” aluminum stabilizer (thickness of 0.8—1.0 mm), clean the place and epoxy resin glue beech fairing, reinforcing the joint. The tail model is ready.
Second knot — front. Bent at the figure of Taha same wire Ø 2,5 mm. Rear strut, soldered with the winding seam copper vein, — OVS Ø 1,5 mm. Ski with cheeks, dropped below the base for the retention of the air “cushion”, is bent of steel with a thickness of 0,6 mm and soldered carefully. Before installing it on the front bend of the wire OVS Ø 1 mm spring, biasing the rear portion of the sole to the track. The force pressing the pick up during the debugging starts.
Tank — “single-chamber drinker”. Unusual only for its fastening to the beam using metal clamps covering a rubber tube — vibration dampers. This design will provide less foam, operation mode of the engine during a race will be more stable.
The fairing can be done in different ways. If you lay the same series of models, half of the hood is better to wikipolicy or extrude into the lead from a sheet of soft aluminum alloy with a thickness of 0.8 mm on the dural surface. These details are recorded in three places: at the tail of the tightening screw on the engine head and in the nose of the model — steel ring. It is easy to applied to the wall of the fairing and fiberglass the foam to form the mandrel. Just will have to further Tinker with Vykurovanie the surface of the finished part and its color. Although aluminum “shells” too, it is better to Polish the outside. That’s all. Install the tail skates, cord strap, propeller with spinner. Bending the bar until the plane of symmetry of the model, fastened by a lug to this detail, was strictly horizontal. At the starts, bending slightly up or down the beam with stabilizer and forward or back rack of skis, you can achieve a very steady track. A well-oiled machine in the race almost loses contact with the track and at the same time not “notice” any grains snow or significant irregularities of the ice. Do not move the bar on the right side! For a given direction of rotation of the propeller model, as all the representatives of single point scheme, at the start of the falls on the left side, in this position, cord strap acts as additional points of support. 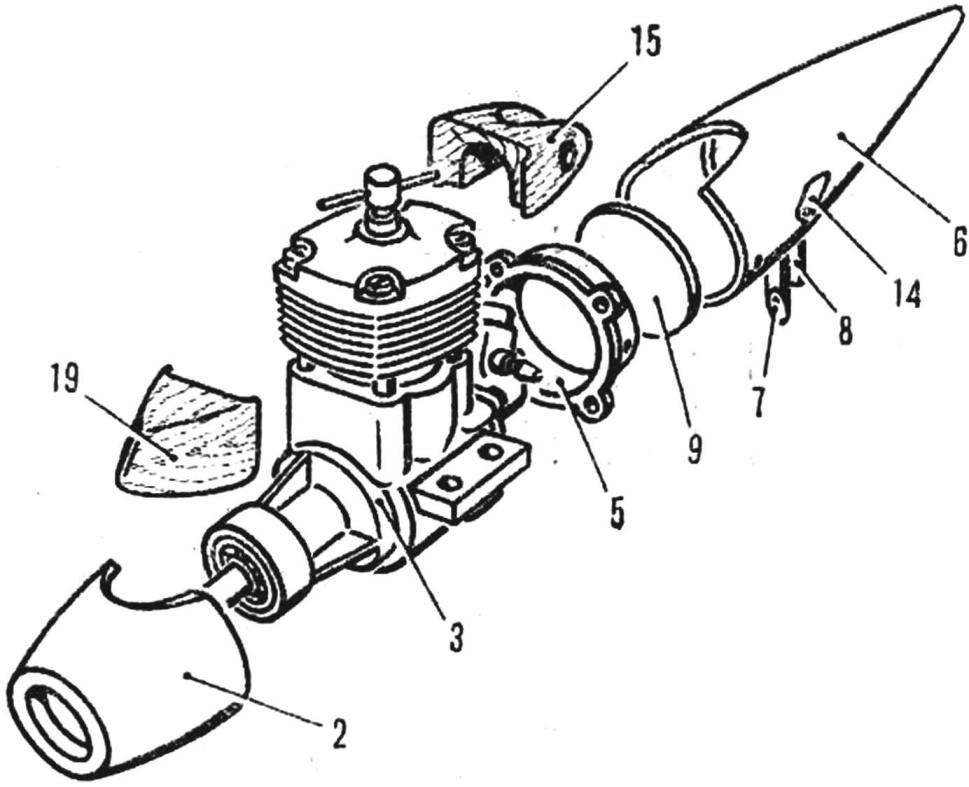 Assembly diagram of the power part of the model (bottom view). 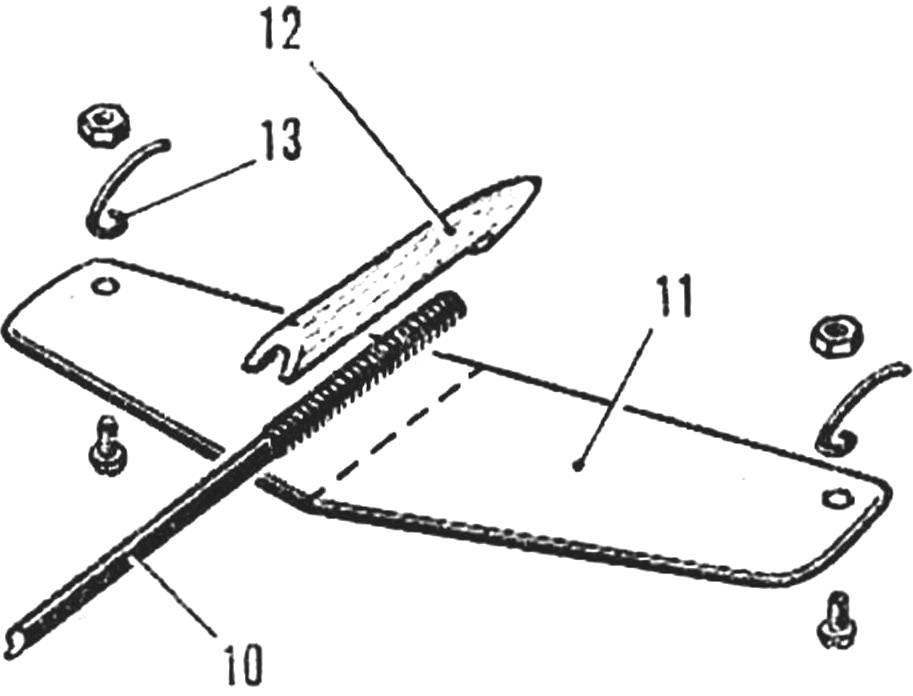 Scheme of the Assembly of the tail model (bottom view).
Several layers of the engine. Like any other model, still it is to a large extent depends on the result in. First of all — about “cosmetic” measures. Round ribbed shirt of the cylinder opalite laterally, as shown in the drawings. Weight is clean, though slightly, but will improve the air flow around the bottom of the hood. Yes, and the engine will not SuperCool, because the original ribs designed for the summer heat. Pay special attention to the balancing of crank mechanism. It is better to do under the guidance of an experienced Modeler mechanics. The necessity of domainservice obvious: a well-known effect reduce the speed of the motor on the light model, caused by high vibrations. Dollarsyou can be carried out, and fabricated new lightweight thin-walled piston with screw lock panel made of light alloy (example: engine piston “Zeiss-Jena”), Exhaust pipe, bent cut out of a suitable thin-walled pipe will not allow exhaust fumes to seep into the suction hole of the carb. The rest of the crossing “Rhythm” is carried out by conventional methods.

FROM THE EDITOR. When the material is of a rather unusual model snowmobiles were already prepared for printing, the letter, which focuses on the construction of the “new generation” of this type. Even at first glance, the model of the snowmobile of omich I. Peregudova looks finished and perfect in its simplicity. To give an idea about the interesting way of searching for young modeller, we decided to acquaint you with this option.
Retaining all the advantages of previous sleds, the model has become even more compact and reliable in operation, area midleware section wiata do to the limit. In scoring and total hardness, and strength.
Abolished and General hood was replaced two light chiseled fairing. Front enhance the design of the crankcase of the motor, sealed tightly, the back is attached to the wall via a detachable adapter. Membrane rear fairing separates the volume of the fuel tank. Therefore, special attention is paid to the bonding beams that were absent flow through this connection. Finished aerodynamically correct form Carter give a small additional wooden fairings. However, as it turned out, the shirt sleeve has negligible resistance increment compared to zakuporivaniya, from the spinner head has refused altogether.
Ski, the construction of which is shown in the first model, unseemly changed. Now as a spring, pressed down to the ice the heel of the sole, performs elastic strut (OBC Ø 2 mm), and the ski clamped on her still, by soldering.