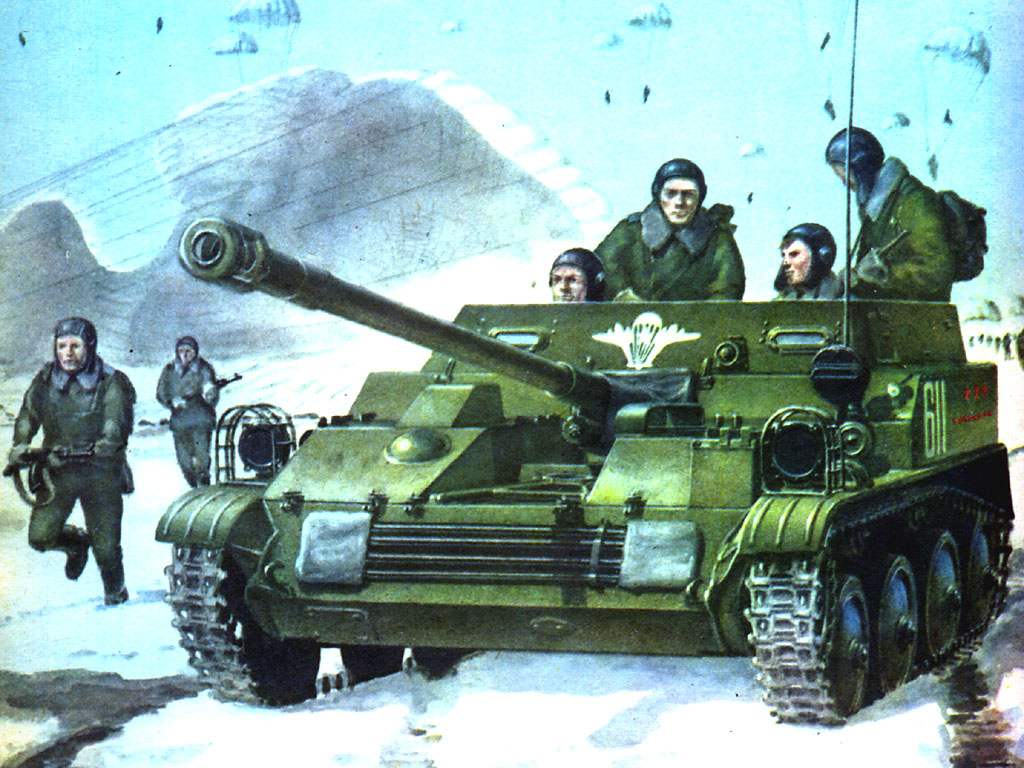 In 1947 in accordance with the September decision of the government in the aviation experimental design Bureau (OKB-115), headed by A. S. Yakovlev, began development of a heavy landing glider Yak-14 and simultaneously — airborne self-propelled ASU-57. Caterpillar machine was built in the beginning of 1948, and, after a short factory test in April passed on field tests in the research test an armored polygon BT and MV VS (NIIBT Polygon).

The car was equipped with four-cylinder engine GAZ-M output of 50 HP from the car “Victory” and 113П automatic cannon caliber 57 mm designed by A. E. Nudelman with a powerful muzzle brake and red-dot sight K-8T. Her ammunition consisted of 51 shots, was located at the rear of the fighting compartment under the gas tank (ammo 20 rounds), in front of the fighting compartment — 16 shots and store cannon — 15 shots.
Aiming the cannon was carried out using the hydraulic system, consisting of cylinders vertical and horizontal aiming, accumulator, gear pump, hand emergency pump and control panel.
Fire control was done by a electric trigger.
Housing ASU-57 was welded from sheets of armor steel with a thickness of 2.5 mm (roof) to 12 mm (forehead). The crew was protected from shrapnel and small-arms fire from the stern. 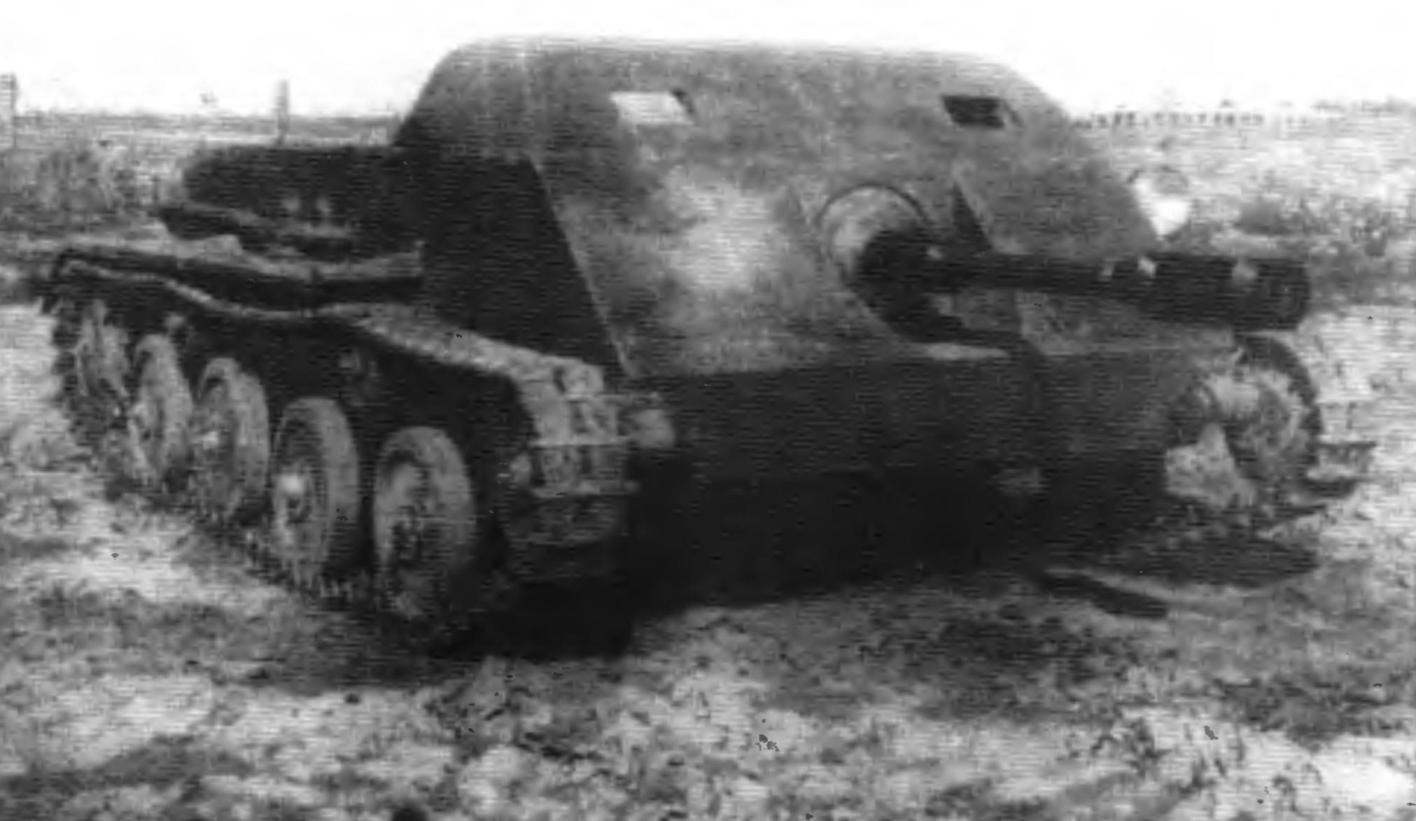 ASU-57 OKB-115
The enclosure was divided by partitions into three compartments: control, combat and power pack. In the compartment on the right housed the driver, and the left — shooting. Both on fixed height seats, which made them uncomfortable when driving.
In the fighting compartment housed a gun with ammunition in rear of the petrol tank; in motorradreisen compartment in the front part houses the engine in mid — gear shift and rear final drive and steering clutches
The office was closed by the cap (lantern), bolted to the hull, self-propelled guns. The engine compartment and the fighting compartment was closed with a roof with hatches and openings for ventilation.
In the frontal there was a spherical recess through which passed the barrel of a gun.
The engine was mounted on the front cross beam of the body, and the rear on brackets (welded to the sides of the hull) using the screws with rubber rings shock absorbers.
The power system consisted of a gas tank capacity of 120 liters, benzoni diaphragm type; of carburetor K-22 and dry mesh air cleaner.
Lubricating system — combined pressure and splashing, included a five-liter oil tank, oil cooler, oil pump MSH-3 and the crankcase.
Motor cooling the mixed water and air; consisted of a cellular radiator, two-bladed centrifugal pump, front and rear shestilopastnye fan and guiding shroud rear fan.
Ignition system — battery, consisted of a battery of SSTA-80, generator GBP 4105, distributor of IGF-4003 and candles M 20/20. Since we are talking about electrical equipment, it is appropriate to note that it also included the electric starter, the LFA-4006, headlight from the car GAZ-AA, rear lamp and interior lighting, but there was no beep.
Transmission included: dry single-disc main clutch, three-way four-speed gear shift of the type GAZ-AA, main gear, two dry multi-plate friction clutches and two onboard transmission. Brake — band, floating-type cover trailing drums of steering clutches. 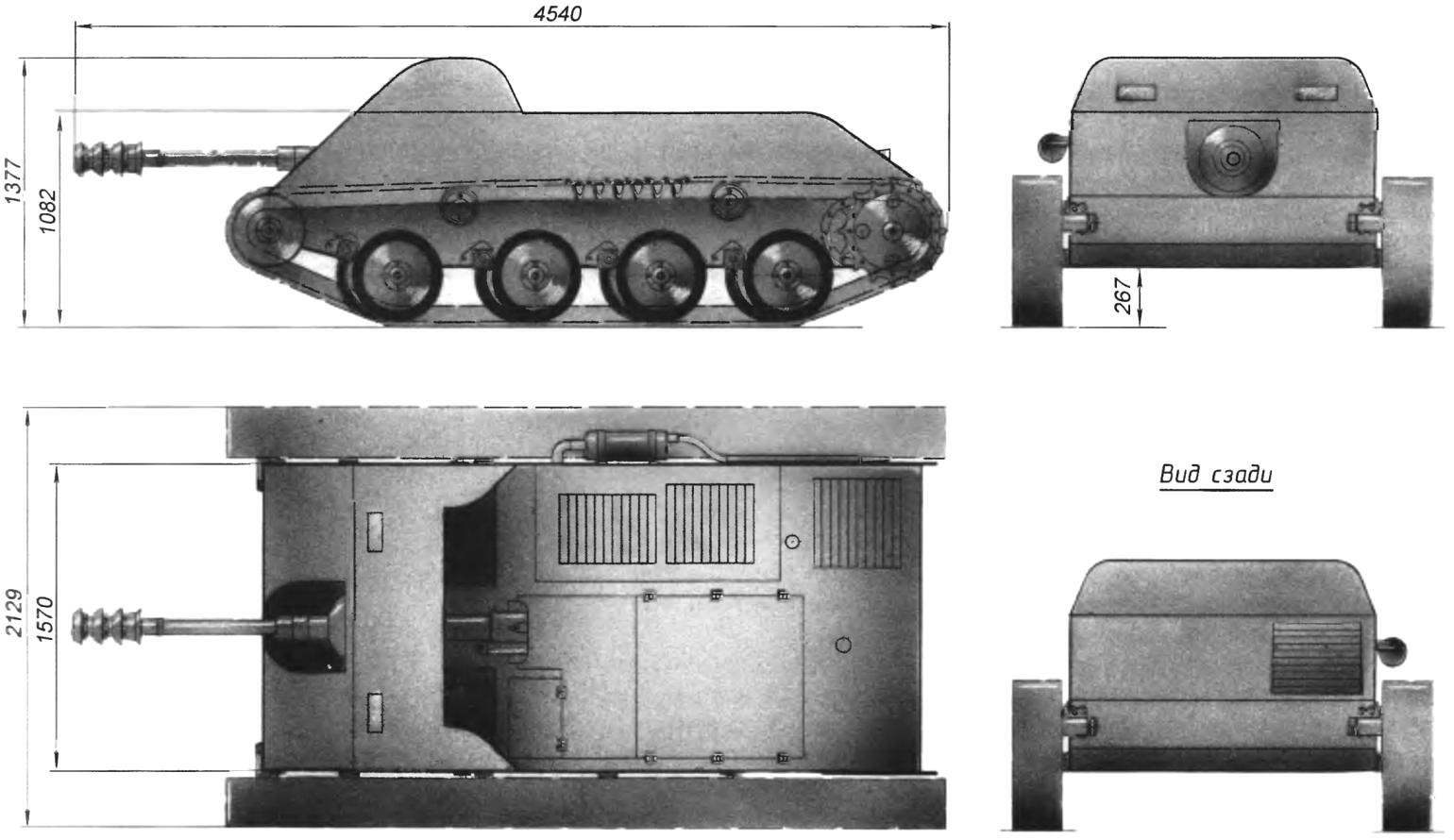 General view of the airborne self-propelled ASU-57 OKB-115
Suspension was a caterpillar mover on an independent torsion bar suspension. Propulsion consisted of two wheels (located on the rear), two sloths with tensioning mechanisms and eight track rollers (four each side), four support rollers (two on each side) and two tracks assembled from 89 tracks each.
But in case of emergency the towing hooks and cables have not been included.
The machine was carried out using levers. Control the main clutch and the gearbox was locked, and movement of the lever transmission the scenes included in the main clutch has not been possible.
The pedal the main clutch was installed to the left front of the driver-mechanic, and slide the gearbox right in front of his seat.
Moving leashes, located in the lid of the gearbox, was carried out using linkage associated with the yoke. Management of onboard friction clutches and brakes — levers mounted to the right and to the left of the driver.
Pedal the exhaust brake was absent, the role of the stopper performed the dogs on the control lever side clutch. Dogs operated by buttons mounted on the upper ends of the levers.
In front of the driver-mechanic placed the flap of test equipment on which mounted: speedometer, clock, thermometer engine cooling system, thermometer and pressure gauge of the lubrication system, bensinger gauge hydraulic guns, starter button, ammeter and switches: ignition, starter, headlight, taillight, lighting and bensinger.
Ahead of the shooting was located in the remote control gun and two toggle switch: switching the electric trigger and automatic feeding of cartridges.
The test area experts noted a satisfactory external and internal finishes self-propelled units, as well as the high build quality of the machine. 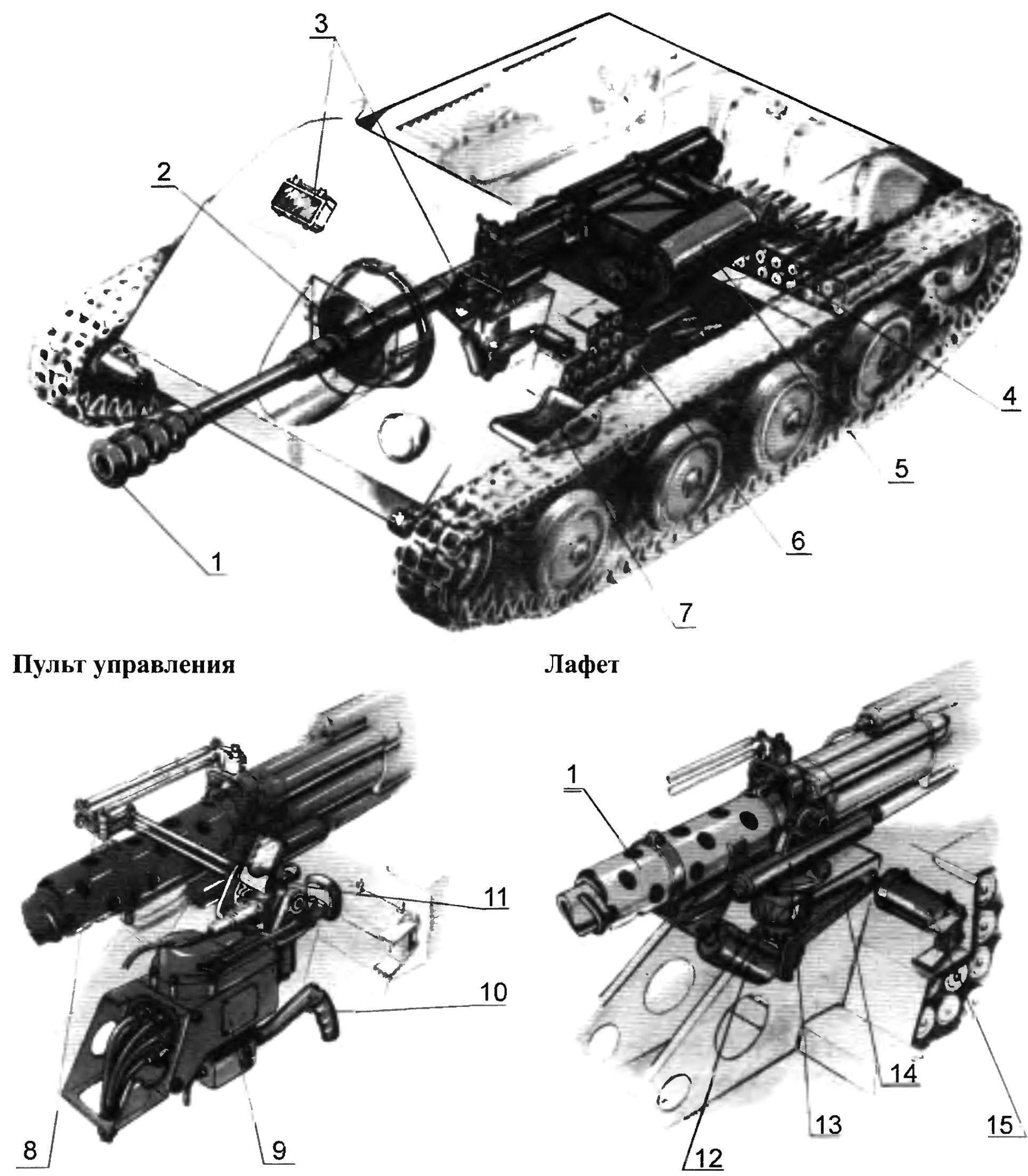 Location of weapons:
1 — gun PZ-L; 2 — spherical recess; 3 — viewing window; 4 — rear ammunition box; 5 — cartridge, 6 — front cartridge box; 7 — seat arrow; 8 — synchronous communication control unit; 9 — valve of control panel box; 10 — handle; 11 — sight K-8T; 12 — cylinder vertical aiming of the gun; 13 — bolt; 14 — a leash; 15 — cylinder horizontal aiming guns
However, during the tests, despite the fact that the thermal operation of the engine over the entire test period did not exceed the established norms, the motor had to be replaced because of pitting of babbit from the lower head of the 3rd connecting rod (engine damage).
In addition, I found the lack of a silencer on the exhaust and exhaust pipe, runs along the side of the machine, created a prerequisite to the fire. In the engine compartment, due to the lack of grids on the grids, got dust, rain drops, dirt clods and debris. The wiring of the ignition wires and there was no screens to protect from moisture on them.
Field tests held in the summer of 1948, the ASU-57 could not resist. Suspension took place the destruction of the rubber of the rear arrays of rollers (rubber as in the rest of the supporting rollers unsatisfactory), strong wear of the crawler tracks (time trials removed two track from each track), stretching the bolts mounting the brackets sloths, increased wear of the bearings supporting the rollers because of the systematic loosening of nuts of their fastening. However, the absence of wings over the front of caterpillars led to a strong dusting the front of the machine, dramatically worsening the conditions of observation for the crew.
Aiming the gun at the target was not possible due to the asynchronous movement of the arms guiding the movement of sight and the swinging of the cannon. A sharp blow of the muzzle wave caused unpleasant sensations in the nose and throat, chest and ears of the crew and a red dot sight K-8T and its installation is not allowed to conduct accurate fire. The lack of increase in the collimator hampered the observation of the terrain and goal distances of over 1000 meters.
Highlighting the scale of the sight of natural light was poor, so pale as the crosshairs were “lost” among terrestrial objects. The inclusion of electric lighting and clarity of the image grid in daylight is not allowed.
Line monitoring using the reflex sight passed through the zone of the muzzle blast that is not allowed to see the gaps and to adjust the fire (when shooting on wet ground the eyes of the gunner and aim zapisyvalis water drops, and when firing with dry ground raised a cloud of dust).
Long thrust and the gear transmission connecting the gun with the scope, did not provide the synchronicity of the movement and gun sight because of the gaps in the toothed links and joint units, as well as elastic deformations rods.
ammunition 51 shot continuously could be used only 15 cartridges in the tape. To continue shooting was needed the shooter and driver in this case, the charging of the tape takes 10 to 15 minutes.
Electric trigger gun worked poor due to a lack of effort developed by the armature of the electromagnet when a voltage of 6V.
Arm guidance was uncomfortable, what if management had to exert extraordinary effort.
On top of that there was no mechanism of switching off the pump gun from the engine, which excluded the possibility of locking the gun in its stowed position.
During the tests, the equipment worked reliably. So, on the sixth kilometer of the run went down the generator. After the first shot collapsed glass spotlight due to its unfortunate location on the body of “self-propelled”.
True, the average speed of traffic on field roads and the fuel consumption is satisfactory. As for oil consumption, it was elevated. The reason for this was reinforced wear cryoseparators and piston group of the engine due to the ingress of large amounts of dust. 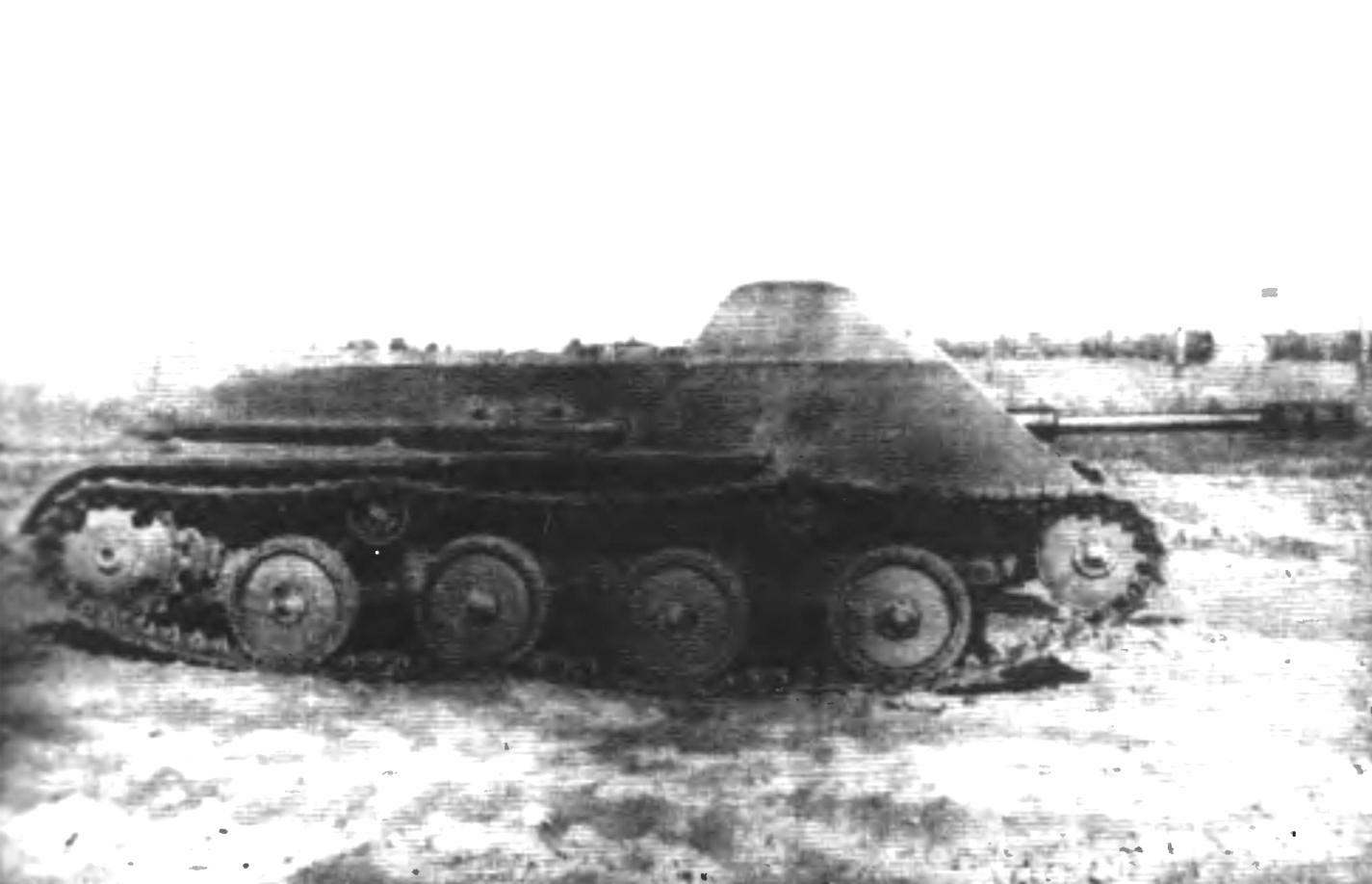 ASU-57 OKB-115
At the conclusion of the report on the results of the tests indicated that “a prototype airborne self-propelled <…> does not meet the requirements of modern samples of armored vehicles of this class, for the following main reasons:
a) the components and mechanisms chassis unreliable;
b) design the installation system, and a hydraulic mechanism of the unprocessed guidance, resulting in the conduct aimed fire impossible;
C) there are no basic facilities for the care and maintenance of self-propelled, which makes its operation very difficult…
Identified <…> fundamental deficiencies in the submitted sample, led to the inexpediency of further tests, therefore, the decision of the Commission, the tests were terminated at 276 km…
Water, knock out the radiator, flows down to the relays of single shots, which can cause failure in its operation.
6. The front fan really hits the seatback of the driver during the deflection as the stiffness of the back is insufficient.
7. There is easy access to the carb.
8. To adjust the valves the engine must be disassembled.
9. For removing the air cleaner must be removed nadvorny the roof.
10. For the lubrication of roller Vodaphone you need to remove the seat back of the driver, which creates an additional expenditure of time in daily maintenance…
During the tests self-propelled all transmission units worked reliably, except for the beating of lubrication:
a) from under cover of the gearbox;
b) through the hole under the probe main gear;
C) through packing of airborne transmission”.
This is the official point of view. The OKB also believe that they are not allowed to bring to the condition of the car, giving priority OKB-40 (later the Mytishchi machine-building plant), headed by H. A. Astrov.
ASU-57 (“object 572”) OKB-40 passed field testing in April 1949, the military in June of 1949. By the Navy adopted in 1951. In serial production was from 1951 to 1955
The crew of a new airborne installations in comparison with the product OKB-115 was increased to three people, and its mass with ammunition amounted to 2940 kg.
The basic data of the airborne self-propelled ASU-57 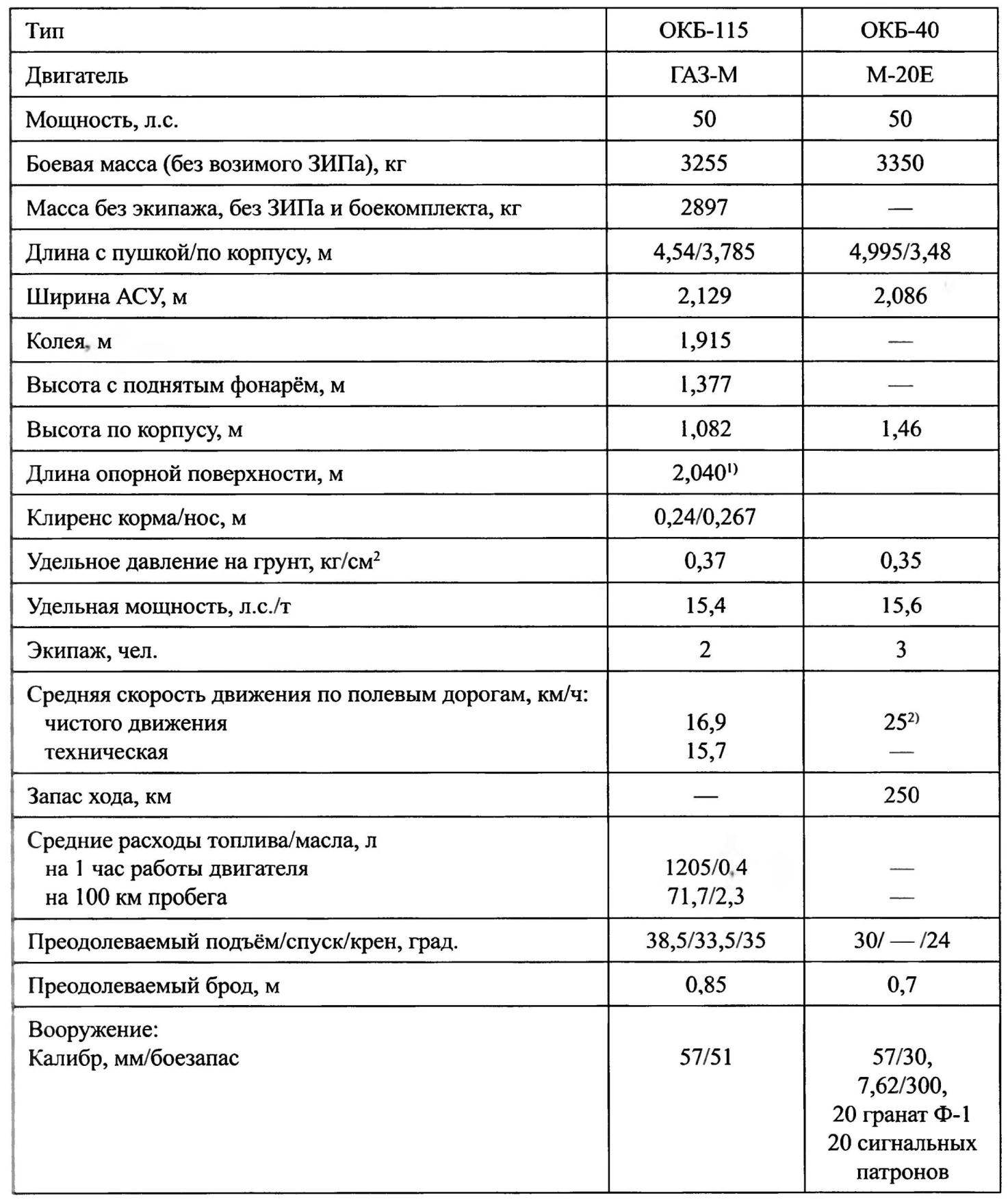 In the spring of 1950, the ASU-57 Astrov was presented at the air force Institute together with the glider Yak-14, but government tests failed. More precisely, unsuccessful fixing the self-propelled gun in the glider with the help of wooden wedges. On completion of the combat vehicle took a year, and in the summer of 1951 she off mechanism depreciation withstood repeated state tests along with a glider No. 1681005 as towed behind the aircraft Il-12T, and in free flight. However, unsuccessful device, the outlet exhaust gases from the engine-propelled. When starting the motor in flight could ignite offer percale trim of the glider.
The crew of the ASU-57 was located on the easily removable seats in the rear cargo compartment of the airframe and liaised with the crew of the Yak-14 on the intercom.
Replacement of wooden wedges to block the ASU-57 mechanism off depreciation allowed not only facilitate curb the airframe, but also reduce the time preparing it for flight.
ASU-57 was in service with airborne forces until the mid 1970-ies.