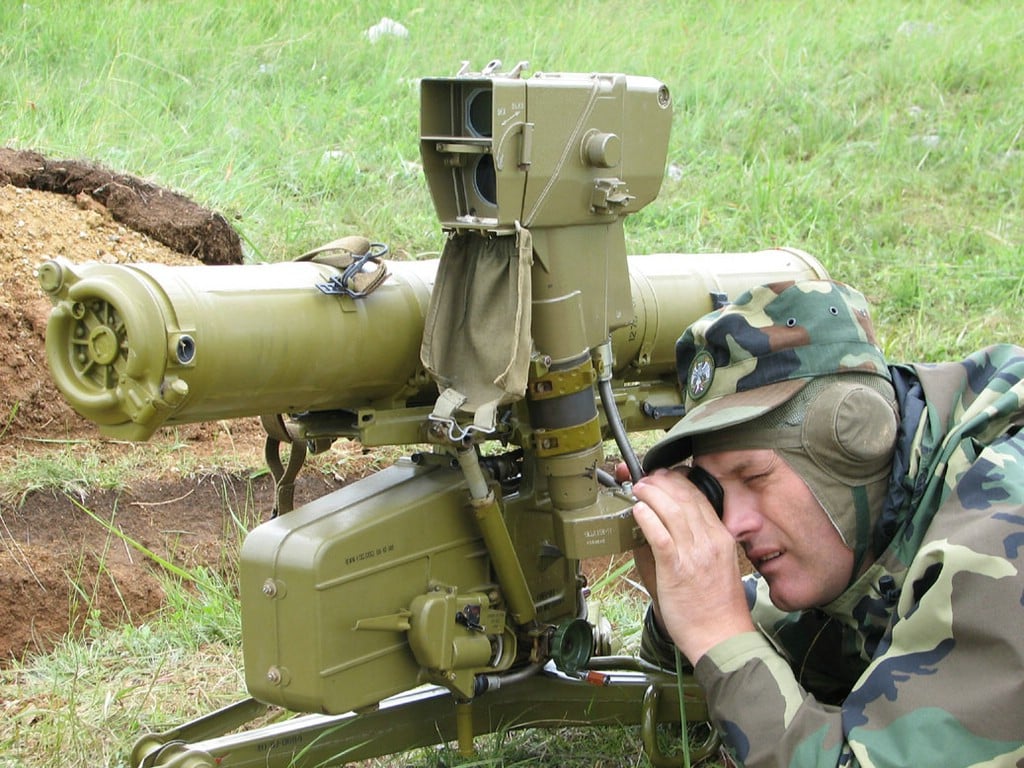 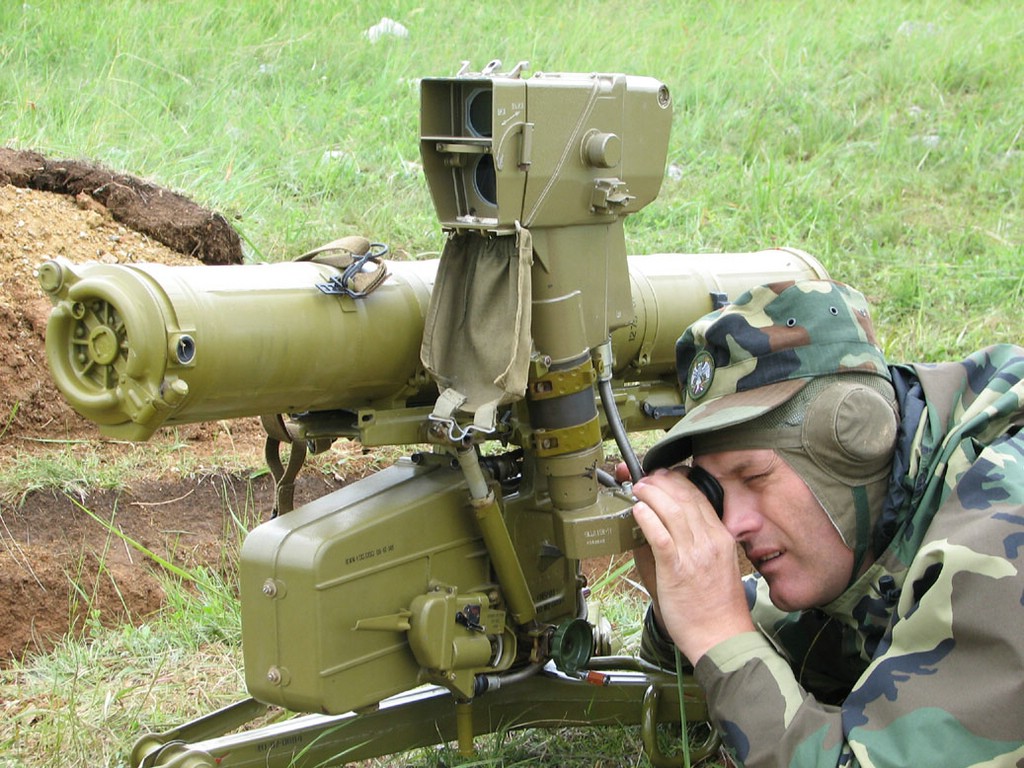 Russian weapons. Old does not mean obsolete. For several decades after the Second world war the steady increase in the use of tanks in the conduct of hostilities was accompanied by the emergence of a number of countermeasures. However, the traditional anti-tank guns were shown to be ineffective for destroying targets protected all the more thick and strong armor, amid a sharp rise in the mobility of tanks on the battlefield and the appearance of other armored threats to infantry.

To put the point in this fight was able with the development of cumulative rockets, first used in world war II, particularly American anti-tank missile launchers from the Bazooka, British PIAT hand grenade and the most famous samples of German anti-tank grenade launchers Panzerfaust and Panzerschrecks and recoilless guns RzB 39 and PAW 600.

The Soviet Union, a land whose troops were in heavy fighting with German tanks, began developing anti-tank guided missiles since the end of world war II. The creation of a new kind of arms greatly simplified German developments in the missile field, particularly the project-driven-by-wire missiles “air – air” Ruhrstahl X‑4, one of the most technologically advanced weapons of the Third Reich, created with the purpose to destroy the British and American bombers, and safeguard the most valuable fighters and their crew from the heavy fire of onboard guns of the enemy.

Although the missile X‑4 was originally developed for air combat, it formed the basis for the design of anti-tank guided missiles (ATGM). At the end of the war, a special anti-tank version of the missile under the designation X‑7 was allegedly used land SS divisions, however, the documentary evidence of the use by German troops of such weapons there. As a trophy, the remains of the project went to the Soviet Union and the allies, who immediately began active development in the field of guided missile system with command transmission by wire. In the first versions of the Western anti-tank guided missile (Malkara, the French Nord SS complex.10 and its modifications, Entac, Swiss Cobra), as well as Soviet complexes “Shmel” (GRAU index — 3М6, classification MO U.S. and NATO – AT‑1 Snapper), “Flute” / “Phalanx” (GRAU index — 3М11, classification MO U.S. and NATO — AT‑2 Swatter) and the world-famous rocket “baby” (GRAU index — 9М14, classification MO U.S. and NATO — AT‑3 Sagger) used one and the same complex system using the control knobs – manual guidance by line-of-sight (Manual Command Line of Sight MCLOS), which is to achieve acceptable accuracy of hitting the target in combat required extensive training of personnel and hundreds of hours of practice on simulators. Other disadvantages are the low speed of a rocket and forced a fixed position of the commander of the combat crew, which makes it vulnerable to countermeasures in the form of a continuous fire on his position. In addition, the commander of the combat crew was difficult to assess, was whether the rocket in front of goal or just went near her side. Despite all these problems, induced by the operator guided missile system became a milestone in the development of anti-tank weapons, as the infantry was cheap and means of destruction of any armored targets in modern combat conditions. 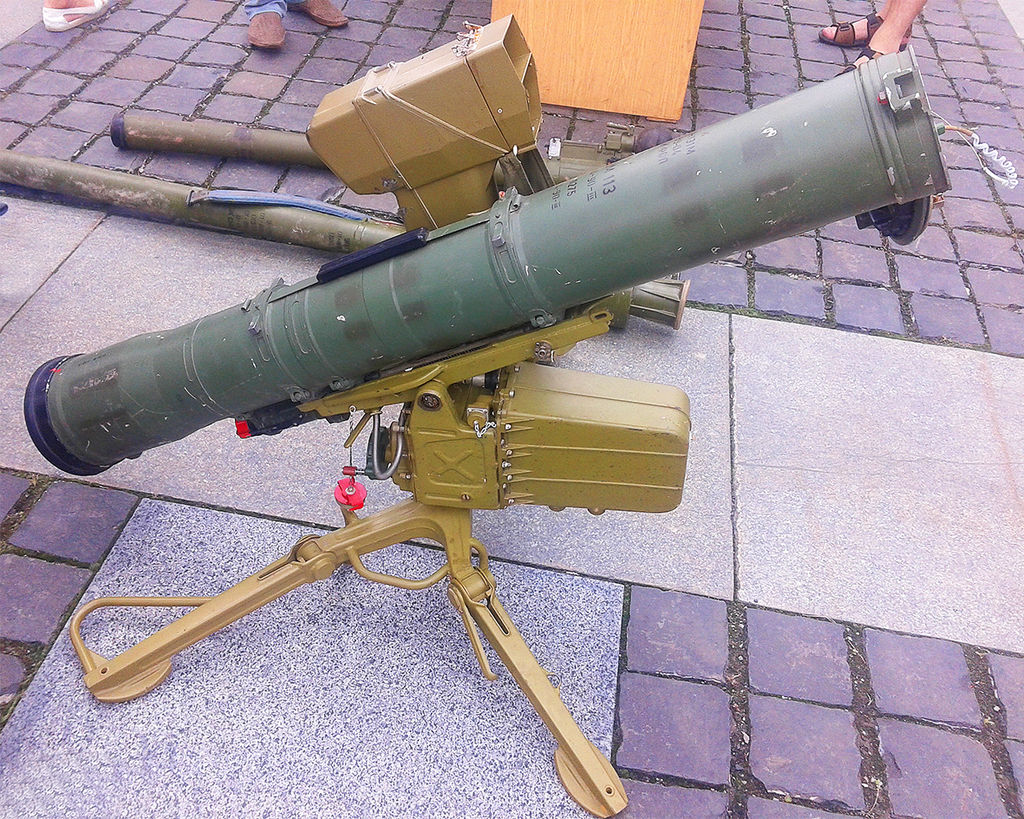 In the early sixties, while the complex “baby” started to arrive on arms anti-tank platoon of the red army, on a new generation of anti-tank already had a job for Kuhlmann. According to the requirements in the new ATRA was to apply a revolutionary system semi-automatic guidance by line of sight and transmission of commands on the wire (Semi-Automatic Control, Line of Sight, SACLOS). For guidance of rockets of a new type there is no need to be difficult to operate the control knob: adjustment of the trajectory was carried out in semiautomatic mode, using the floodlight of the infrared radiation that is installed in the rear of the rocket. Despite the fact that the commander of the combat crew still had to maintain a fixed position during flight of the missile, the chances of survival based on the battlefield has increased significantly, and the preparation of personnel has decreased significantly.

A new generation of missiles was developed in the Tula instrument Design Bureau and entered service in 1970 under the index 9М111 “faggot”. This complex gave the infantry divisions and anti-tank platoons of ground forces of the red army’s advantage in anti-tank battles of the cold war period. In 1974, simultaneously with the modification of the complex “Fagot” under the index 9М111М “Factoria” the troops received a new ATGM with semi – automatic guidance system- 9M133 “Competition”, which was developed in the Tula instrument design Bureau along with “Faggot”.

These missiles became the basis of anti-tank weapons of the infantry and motorised divisions of the Warsaw Pact countries and are in service at present. The period of stay in service (over 50 years) both complexes exceeded only by “baby”, which was used by the armed forces of a dozen countries.

All three systems consist of antitank guided missiles, protected from environmental influences fiberglass launch container and launcher 9P135, equipped with an infrared sight 9Ш119 and guidance system of the missile 9С451. Total weight of the system is 22.5 kg. After tilting the tripod commander / gunner takes the supine position for firing. The initial acceleration of the rocket gets due to the action of the gas generator, similar to the principle of recoilless rifles. Starting a gas generator attached to the projectile an initial speed of 80 m/s, after which included marching solid-propellant motor, which rapidly accelerates the missile to 186 m/s muzzle velocity significantly reduces the so-called dead zone and allows you to hit targets with direct fire, not the curtain track.

With the advent of reactive armor cumulative projectiles with single warhead has ceased to be the storm tanks. However, the popularity of tandem shaped-charge projectiles (small leading the charge triggers reactive armour, after which the main charge penetrates the armor of the tank). Created on the basis of “Faggot” complex 9М111М “Factory” with a tandem shaped-charge warhead was adopted along with 9М133М “Competition”. Complexes “Fagot”, “Factory” and “Competition” were installed on a number of military vehicles such as the BMD and BMP-2, and specialty tank destroyers, for example, on the basis of the 9P148 BRDM-2, is designed to launch rockets for both systems.

Until 2005, Hezbollah fighters, armed complexes “Fagot” and “Competition” managed to destroy the most modern Israeli tanks “Merkava Mk.4” and “M1 Abrams” at the end of the Iraq war. In relation to Soviet and Russian weapons and equipment the term “old” does not mean “obsolete”.

Running all three anti-tank is performed by means of the launcher 9P135 on a steel tripod, each leg of which is equipped with a safety lock. Device tripod forcing the shooter to adopt a prone position when using complex, inconvenient, in some combat situations, which, however, gives anti-tank crews is very low profile and is perfect for camouflage and ambush attacks. In addition to tripod, the PU consists of a system of missile guidance 9С451 and sights 9Ш119 with a tenfold magnification and field of view of 5 degrees. Line of sight can be adjusted by means of entering of amendments in the horizontal and vertical axes. 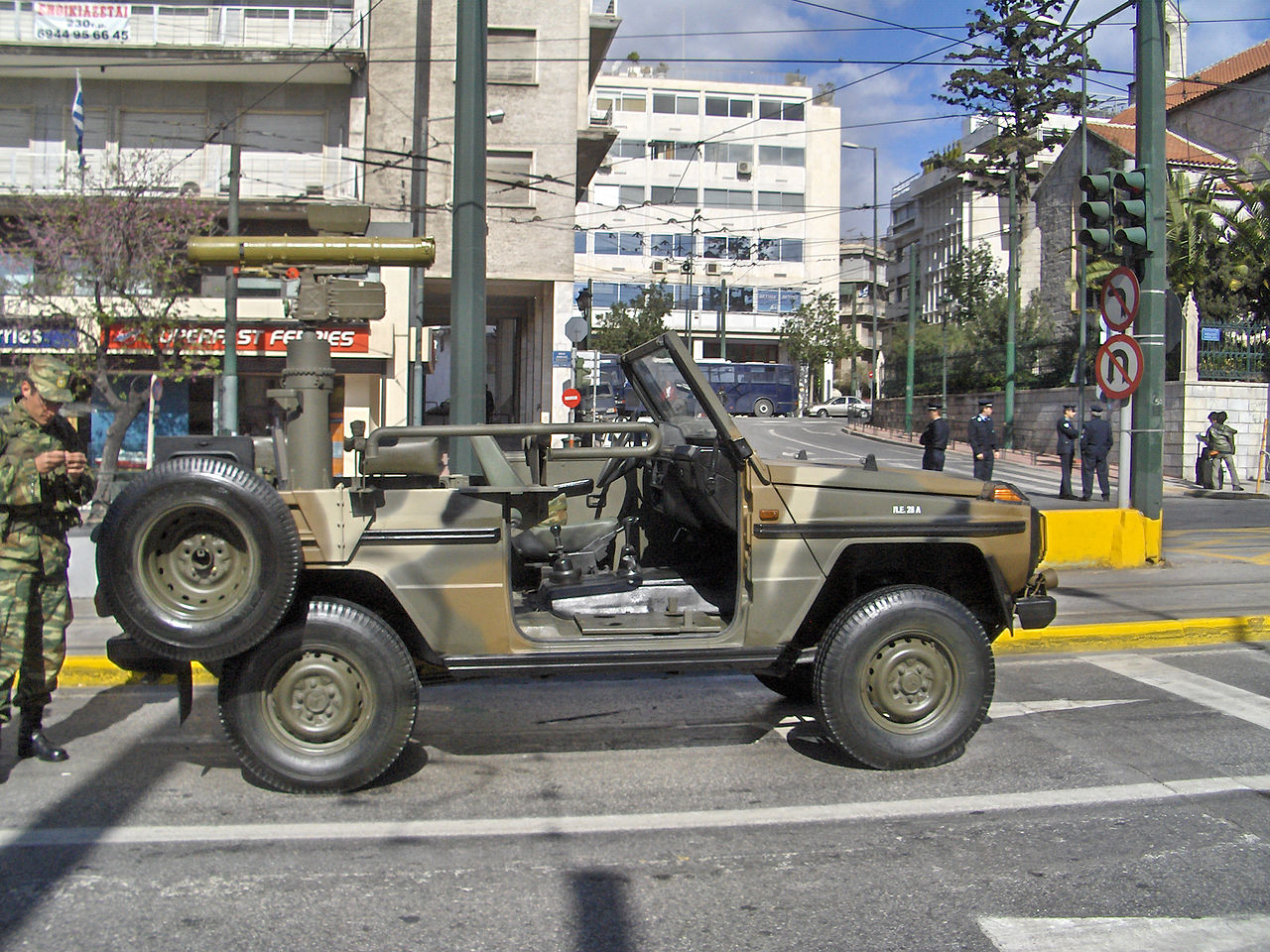 Like other elements of the complex, PU 9P135 repeatedly improved and equipped with additional equipment in order to keep up with the latest developments in the field of reservation, optics and systems to combat on the battlefield. Two subsequent modifications of the 70-ies received improved systems of control and counter-guidance interference. Later, in the early 90-ies was developed by modification of 9П135М3 with 13 kg imager TPVP with a range of guidance to 2500 m (at night). The beginning of the XXI century on the Russian army and for export received a new set under the index 9С451М2 equipped with night sight with automatic dimming.

Like most anti-tank “Fagot” and “Competition” were installed on a number of military vehicles: a specially created tank destroyers, and machine designed to perform other tasks received due to the anti-tank guided missile the ability to destroy enemy tanks. The complex of 9М14 missiles and light combat vehicles 9P148 “baby” on the chassis of the BRDM-2 is gradually replacing its predecessor, the car 9П122 “baby”, anti-tank battalions. The first models were equipped with only 9P148 ATGM “Competition”, then as an upgraded version of the machine could be used for launching anti-tank guided missile “faggot”. The crew makes reloading the launcher via a hatch located at the rear of the PU in four shots, protected by a square metal plate. The shooter brings the anti-tank with sight mounted in the right front of the machine. Ammunition machine 9P148 is from 10 to 14 9M113 missiles 9М111 or placed in the inner compartment for the PU. In 1996, some vehicles 9P148 were fitted with a television sight 1ПН66 with high performance, designed for use both during the day and at night. In the West these machines are mistakenly called BRDM-3. 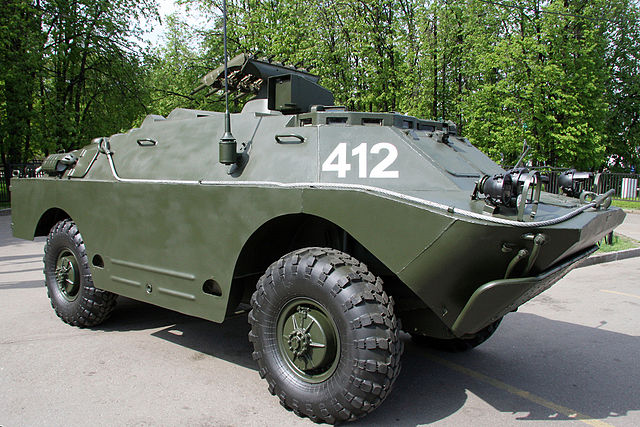 The complex is adapted for use in improved versions of the BMP and BMD. Rotary launcher under the symbol 9П35М‑1 was installed on the BMP‑1P and BMD‑1P, respectively. Despite the fact that the complex “Fagot” / “Konkurs” on combat vehicles, infantry is much superior in its characteristics, difficult to use 9М14 “baby”, when using the arrow have to open the hatch of a combat vehicle, making it vulnerable to enemy fire. The complex was mounted on the right side of the BTR-RD “Robot”, a modification of the airborne armored personnel carrier BTR‑D, equipped with additional storage compartment for ammunition.

The first combat vehicle of infantry, where 9135М-1 was installed originally, was BMP 2, who came to replace the BMP-1 in 1981 (?). Like on the BMP-1P, the complex was mounted on the top of the tower has not been deprived of the above drawbacks. The complex also mounted on the chassis of the all-wheel-drive unarmored UAZ-469.

In a similar way PU 9P135 were installed on various vehicles outside the Soviet Union, in particular the Mercedes-Benz Geländewagen Land forces Greece. A very unusual example is the installation of the complex on a secret tank “the Songun-915” North Korean production. At a military parade in Pyongyang in 2010, this mysterious tank first appeared with two ATGM “Fagot” on a small launcher, turret mounted, but no visible control systems. To shed light on this mystery, shrouded in darkness, yet.