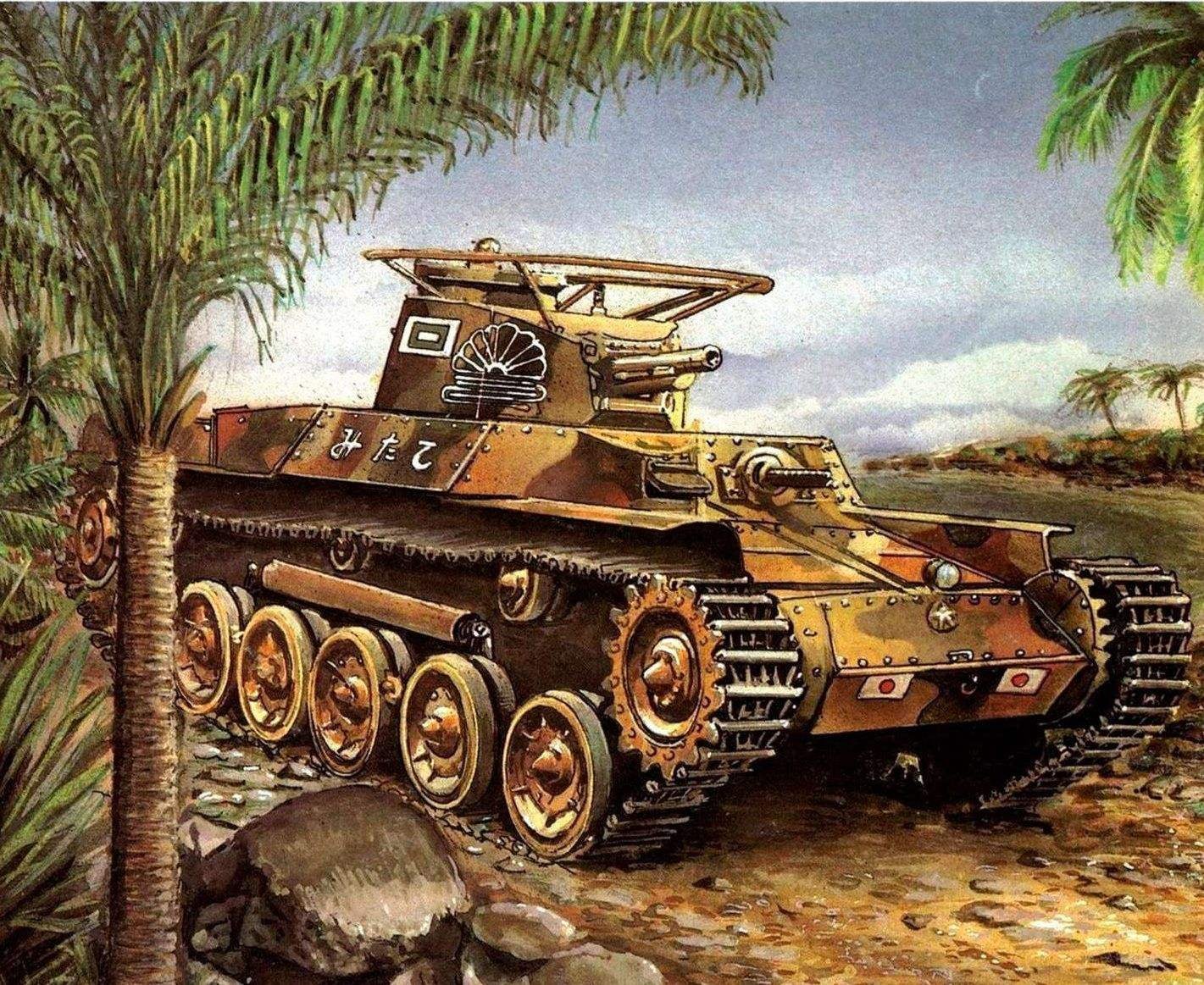 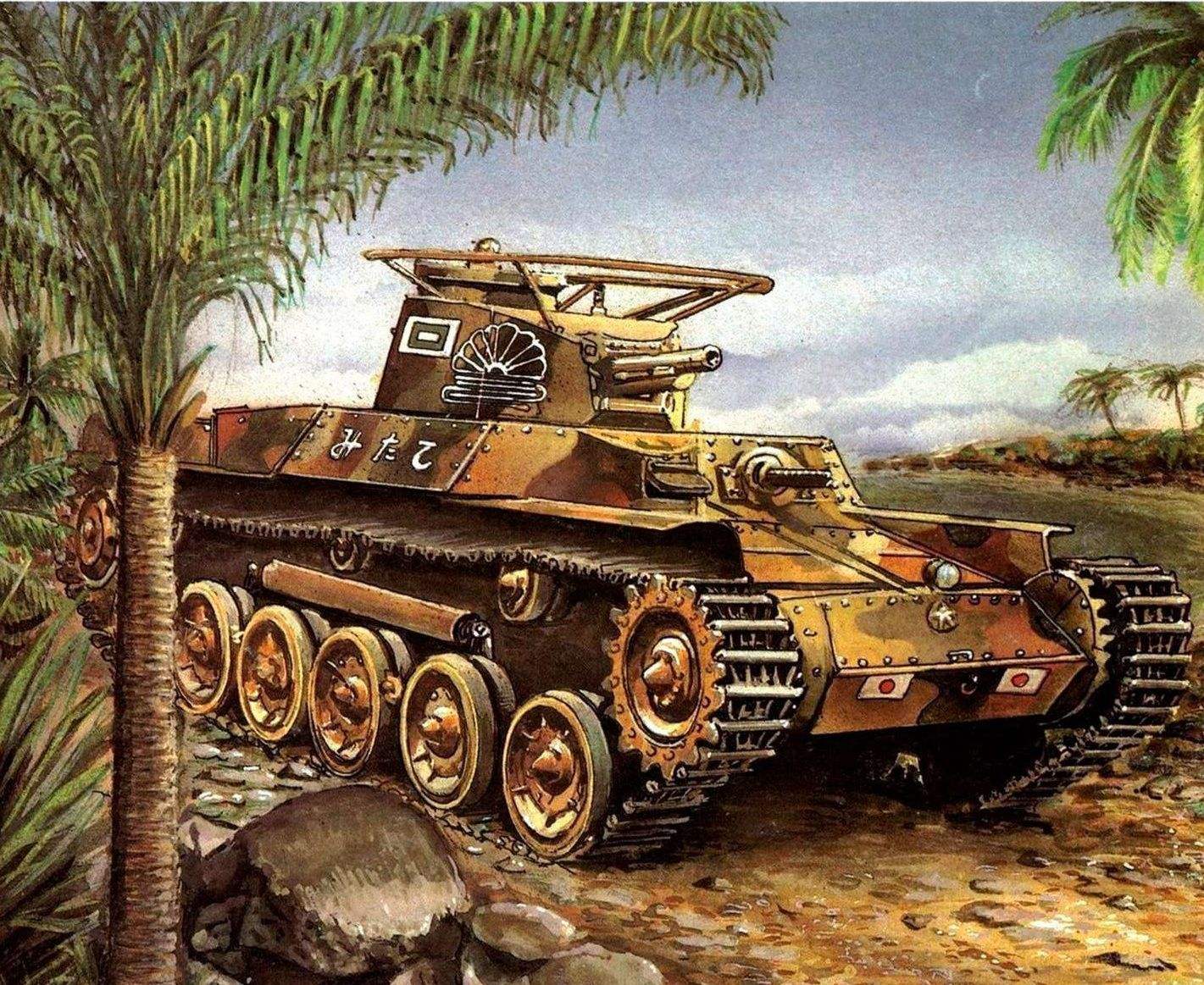 Unlike most other countries, the Japanese tank development began not with light, but with medium tanks. The first was a medium tank “2589” (see “modelist-Konstruktor” No. 1,1997), developed in 1927, based on the English tank “Vickers” MK With and experienced the Japanese “2587”. It was created on the basis of contemporary ideas about the role of tanks that had prevailed among the Japanese military, according to which the main task of the tanks was to support infantry. To the middle 1930-x years, these views have undergone a major adjustment. In particular, armor protection and mobility “2589,” was deemed insufficient. These findings formed the basis in 1936 of the technical requirements for a new medium tank. At smaller sizes, better mobility and a more powerful armor than its predecessor, he had to have the same armament — 57 mm gun and two machine guns.

As the technical specifications were developed in two instances — the General staff and the technical Department, and these organizations do not all agree with each other, and produced two prototypes. In accordance with the views of engineers of firm “Mitsubishi” has developed a 15-ton tank “Chi-ha” (“middle third”), the military sponsored the creation of an Arsenal in Osaka a 9.8-ton “Chi-Ni” (“fourth medium”).
Both the prototype was tested in early 1937. Tank “Chi-Ni” was lighter than its competitor. His crew consisted of three people— the commander (also the gunner and loader) was placed in the tower shifted to the left, the driver and gunner located in the hull, respectively, left and right. Suspension, in relation to a Board, comprised of eight rollers of small diameter and three support rollers. With the weight of 9.8 tons it was powered with a 6-cylinder engine capacity 1 5 HP Latest allows the tank to reach speeds up to 30 km/h Armament “Chi-Ni” consisted of a 57 mm gun and a 6.5 mm machine gun. Tests showed that he was more of a tank direct support of the infantry, not much better than a light “Ha-go”. And its weight it was more easy than medium. Nevertheless, he was considered as the main candidate for adopting, as the Japanese General staff preferred tanks less weight and cheaper to manufacture. However, after the outbreak of war with China, the military leadership has changed its view in favor of the better armored and more maneuverable “Chi-ha”. In 1937 he was accepted into service under the designation “2597”. Mass production of a new medium tank began after the completion of the phase of active hostilities in China in 1938. Until 1944 the firm “Mitsubishi” in cooperation with companies-subcontractors “Hitachi” and “Nihon This-Kuso” produced 1220 tanks of this type (including a modernized version of “Shinhoto Chia”).
“Chi-ha” had a classic layout with a front of the transmission. The hull and turret are assembled from rolled armor plates on the frame of the strips and corners with rivets and bolts with bulletproof heads. On the roof of the tower housed the commander’s cupola with observation slits and hatch skryvavsheysya double cover. The maximum thickness of the frontal armor of the hull was 25 mm, towers mm — 20 mm.
The tank was fitted with a 57-mm gun “Type 97” barrel length 18.5 caliber. Musk-installation tools allow it to swing in vertical (from -9° to +21°) and horizontal (within ± 5°). Any linkage were pointing the gun at the target was carried out using a shoulder rest. Gun ammunition consisted of 80 unitary artillery rounds with high-explosive and 40 armor-piercing shells. Two 7.7 mm machine gun “Type 97” housed in ball launchers in the front part of the hull and stern of the tower. The barrels of the guns were protected box broncoway length of 420 mm. Behind the commander’s turret is attached to the swivel for anti-aircraft fire from a machine gun, which the commander could lead, almost leaning out of the hatch, but in a very limited sector. Ammunition guns consisted of 3825 rounds.
Two-stroke V-shaped 12-cylinder diesel “Type 97” with a capacity of 170 HP at 2000 Rev/min dispersed 15,2-ton fighting vehicle to a speed of 38 km/h. cruising range was 210 km Transmission includes a multi-plate main clutch, a gearbox with sliding gears and reduction gear providing eight forward and two reverse, two-stage planetary rotation mechanism and final drives. 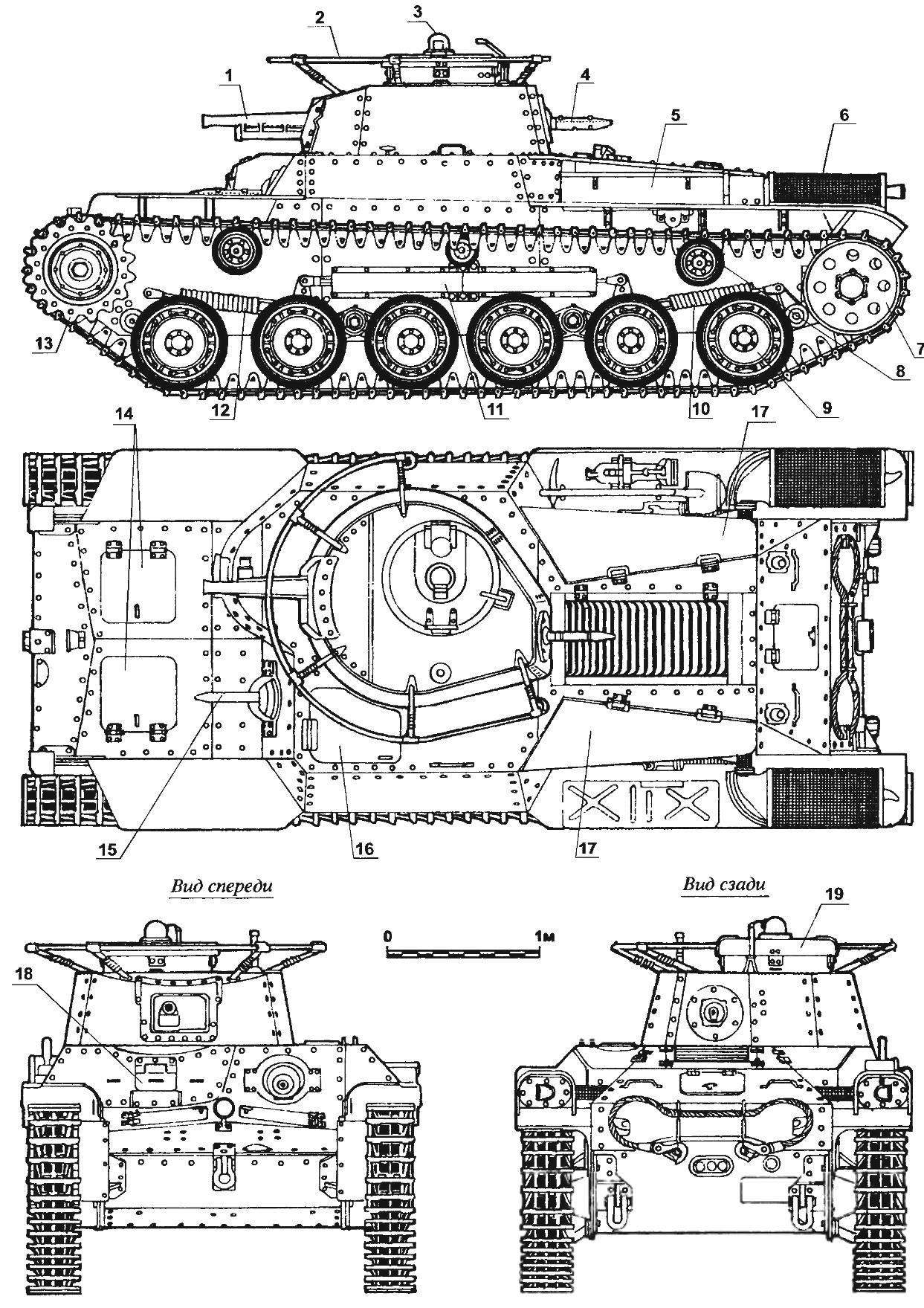 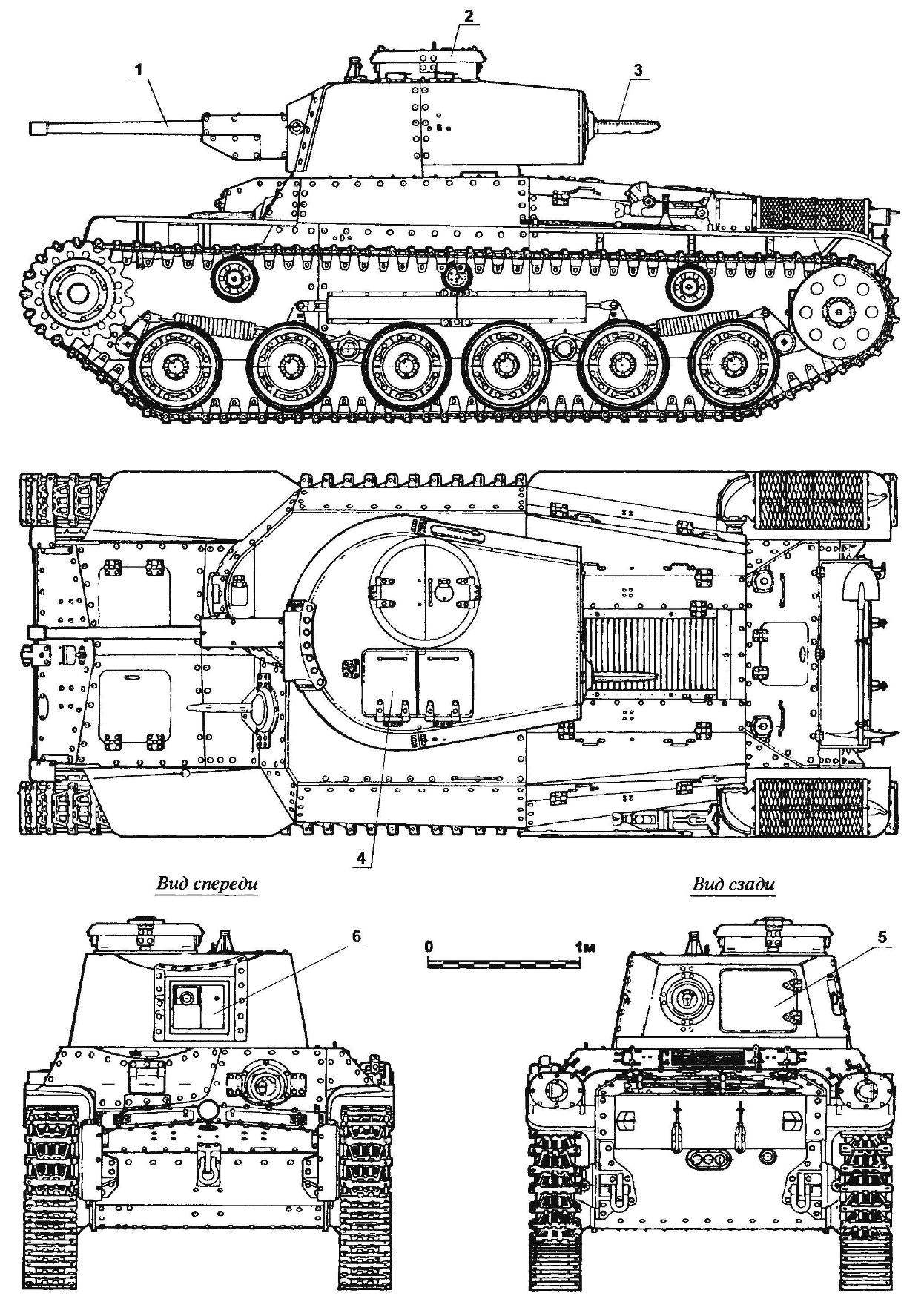 Layout of a medium tank “Chi-ha”:
1 — the cabin of the driver; 2 — a machine gun course, 3 for 57-mm gun; 4 — telescopic sight gun; 5 — porucnika antenna; 6 — laying the 57-mm shots on the wall of the tower; 7 — shoulder guns; 8 — periscope surveillance device; 9 — the commander’s cupola; 10 — swivel for mounting anti-aircraft machine gun; 11 — feed the machine-gun; 12 — armored barrel shroud of the gun; 13 — laying machine-gun shops; 14 — fuel pump; 15 — engine: 16 — exhaust manifold; 17 — protective mesh of the muffler; 18 — battery: 19 — idler; the 20 — track roller; 21 — a starter; 22 — installation of a 57-mm rounds; 23 — the gunner’s seat; 24 — the driveshaft; a 25 — seat driver; 26 — gear box; 27 — drive wheel; 28 — spotlight
Suspension consisted of six dual rubber-lined road wheels and three support rollers on Board. Four medium track roller was interlocked in two trucks and suspended for “scheme’hara,” the two extreme — the first and the last — had independent suspension. Melkosofta caterpillar cycloid gear consisted of 96 tracks width 330 mm.
Overall “Chi-ha” was a typical “light-medium” tank with low weight, weak booking and satisfactory mobility. Negative effect on his combat capabilities were affected by the low quality of the sight and the presence of primitive instruments of observation. In addition, the “Chi-ha”, like all Japanese tanks, differed very little volume of the crew compartment.
Simultaneously with the “Chi-ha” was adopted a specialized command tank “Chi-Ki” to the regimental headquarters level. This machine was equipped with a more powerful radio, navigation tools and additional signal devices. 57-mm gun was removed, and as compensation instead of exchange machine gun in the hull was mounted a 37-mm gun.
Namangansky events known in our country as armed conflict at p. Halkin-Gol, clearly showed that the tank’s gun should have mostly anti-tank characteristics. So in 1940 there was a modification “Shinhoto Chi-ha” (“middle third with the new artillery tower”). This tank was armed with a 47 mm gun “Type 1” with a barrel length of 48 calibres. Its armor-piercing shell had an initial speed of 825 m/s and at a distance of 500 m past the normal 50-mm armor.
Gun ammunition consisted of 104 rounds, machine guns — from 2745 rounds.
Most of the new tanks was a remake of the already released “sneeze”. Newly manufactured machines differed ventilation of the engine compartment and the presence of light and sound when the commander and driver.
In the same year a new modification — Type “2601” (or “Type 1”) “Chi-ha” (“medium six”) with welded hull with simplified design. A front plate is a direct, disappeared the speakers forward cabin of the driver, and the thickness of the frontal armor was doubled. Tower and armament remained the same as the “Shinhoto Chi-ha”. The mass of the tank increased by 1.5 t, but due to the installation of a 240-strong diesel dynamic characteristics of the machine is not deteriorated. Firm Mitsubishi and Arsenal in the battle from 1941 to 1945 produced more than 600 tanks “Chi-ha”.
On the basis of the latter produced and command tanks “Ka-so”. 47-mm gun was replaced by the layout, thus freed space for additional radios. In 1942, on the basis of “Chi-ha” was developed by a 16.7-ton assault tank “Type 2” “Ho-Ni” (“first artillery”) with 75-mm short-barreled weapon intended for fire support linear tanks and infantry in combat.
The last production version of a family of “Chi-ha”, which entered service in 1944, became a medium tank “Type 3” “Order” (“medium ten”). It was a “Chi-ha” with a new welded hexagonal turret in which was mounted a 75-mm cannon with a barrel length of 38 caliber. Its armor-piercing projectile at a distance of 1000 m punched 65-mm armor.
“Chi-well”, without a doubt, was the most powerful Japanese production (released 60 units) medium tank of the Second world war. He was surpassed only by established by the end of the war “Type 4” “Chi” (“the seventh medium”) and “Type 5” “Chi-ri” (“the average of the ninth”), and the remaining experienced. However, the serial “Chi-nu” to war also didn’t have all of them done in the 4 th armored division, intended for the defense of the Japanese Islands to drop which, as you know, it never came.
As for the “Chi-ha”, the baptism they received in 1939 during the battle with Soviet troops in Mongolia, R. Khalkin-Gol. Composed of 3rd armored regiment of the Kwantung army, there were four combat vehicles of this type. With their participation occurred almost only during the entire period of the conflict, the battle between Soviet and Japanese tanks. On the morning of July 3, 1939, Japanese troops went on the offensive on the East Bank of the river Khalkin-Gol. The Soviet command had here a few armored forces — in addition to the armored cars of the 9th brigade mitobronitol there were only eight tanks BT-5 from the 2 battalion of the 11th tank brigade. At 12.00 they engaged in battle with the attacking machines of the 3rd Japanese tank regiment. The result is a two-hour battle destroyed five Japanese tanks. One of them — “Chi-ha” regiment commander Colonel Yoshimaru. The Colonel himself and members of his tank crew were killed.

Medium tank “, Shinhoto Chi-ha”. The 11th tank regiment, the Kuril Islands, 1945
In future fighting machines of the family “Chi-ha” participated in the fighting of the Second world war, almost everywhere, where he fought the Japanese army in China, the Philippines, Malaya and Burma, on Islands of the Pacific ocean. During the war the main opponents of the Japanese tanks were American tanks, which “sneeze” and its modifications were losing almost all indicators.
Lost they and Soviet combat vehicles, which met again on the battlefield in August 1945. Troops of the Soviet TRANS-Baikal and the 1st far Eastern fronts were seized 600 serviceable tanks, including 350 “Chi-ha” and “Shinhoto Chi-ha”. Most recent after the Second world war, the Soviet Union gave the people’s liberation army of China.
Some “Shinhoto Chi-ha” was delivered to Nicholoson in the Moscow suburb of Kubinka, in the autumn of 1945 and spring of 1946 passed their extensive tests (in the documents of the polygon, these machines are referred to as “the average Japanese tank 97 ITC”), the report made by our experts after completion of the tests, in particular, stated: “Japanese 97 medium tank MTK 1937 sample belongs to the class of medium tanks. A small thickness of the armor plates, the presence on them of a number of notches and protrusions in the imperfect configuration of the case do not provide a reliable tank armor protection. A characteristic feature of the weapons is the lack of a machine gun, coaxial gun, and the absence of a special reservation mask. Firepower (gun 47 mm) for tank weighing 18 tons is insufficient.
The tank features a 12-cylinder diesel air-cooled. The dimensions of the engine are disproportionately large and do not correspond to its power. Noteworthy is the placement of the fuel tanks in the engine compartment below the engine. This placement of the tanks reduces the possibility of their destruction by fire. Air cleaner outdated design does not provide good air purification.
Suspension of the tank is open, the horizontal arrangement of the helical springs. The lack of shock absorbers or elastic constraints determines the duration of the vibrations of the body and causes an overload of the chassis parts. Support and rollers, leading and guiding wheels, tracks and the mechanisms of their tension of conventional design and not of interest.
97 Japanese medium tank, the MTC in its armor protection and firepower does not meet modern requirements. Design of most units of the tank obsolete and of no interest”. In principle, such an assessment can be given to any Japanese tank of world war II.
M. BARYATINSKY