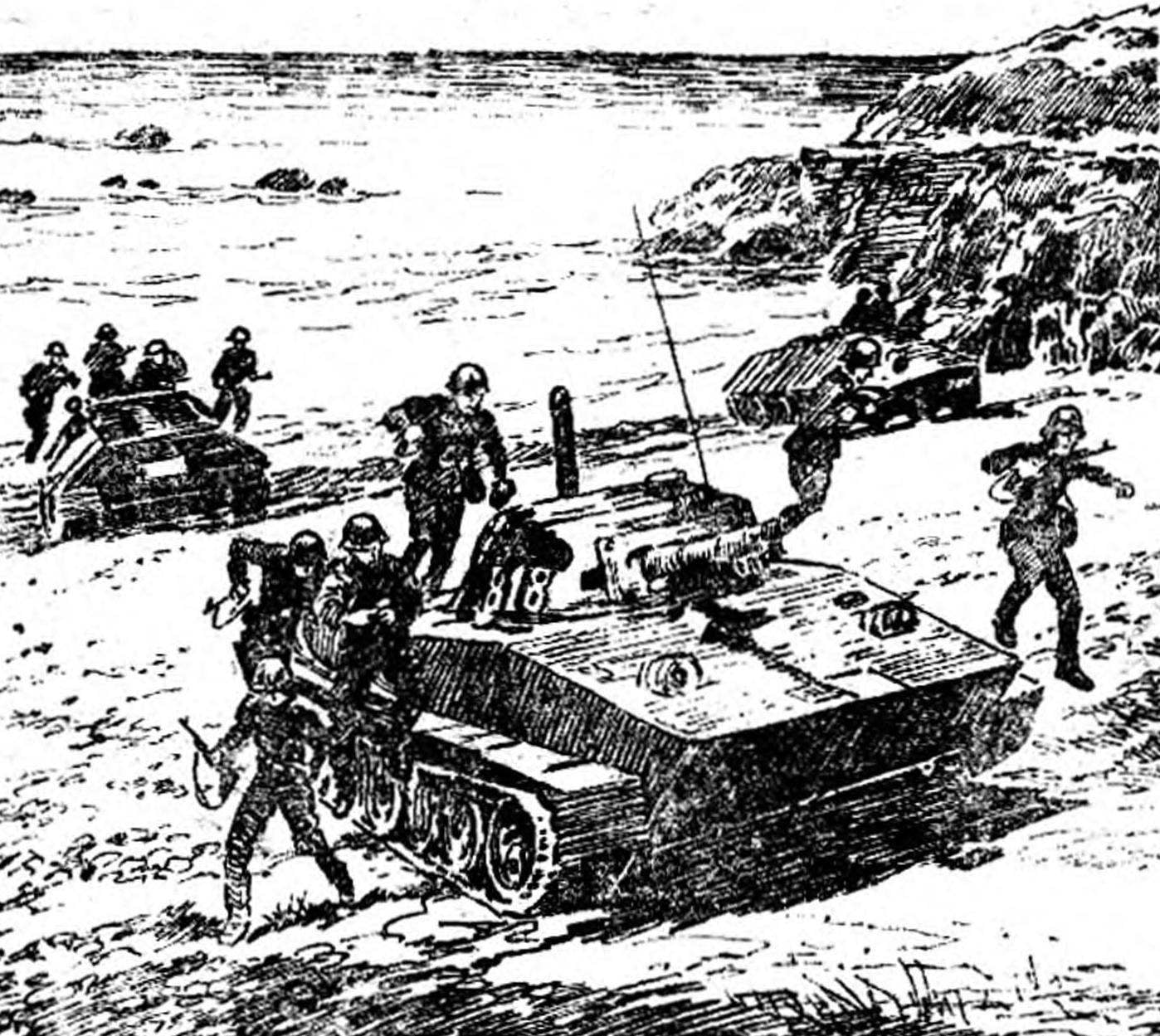 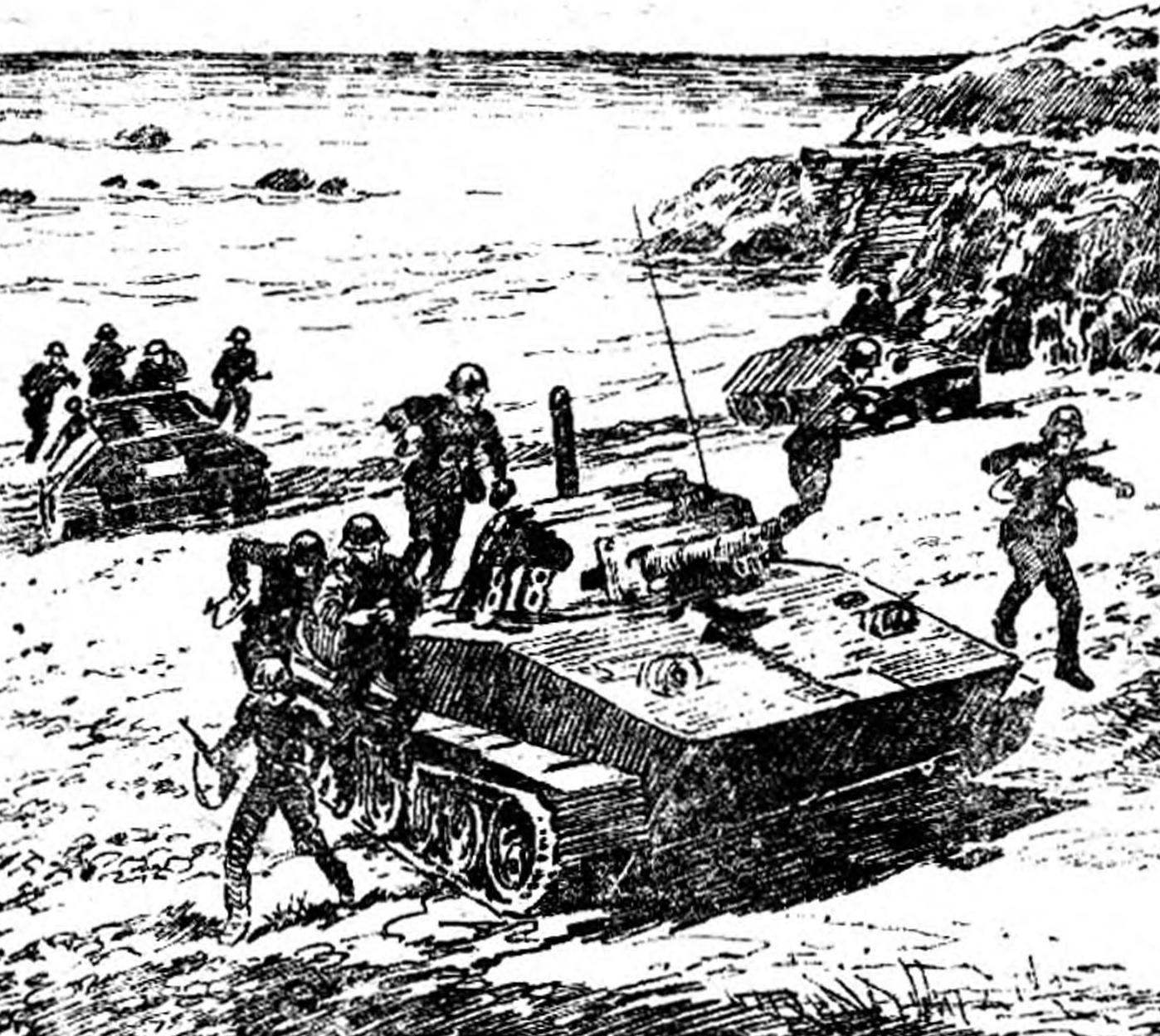 Few people of Leningrad, occupancies that August day in 1935, near the Peter and Paul fortress, the Neva river, witnessed the unusual spectacle. On the river, confidently slicing through low, the wave, floated… tanks. Here all seven turned sharply to the shore, and a few minutes of armored amphibians were already on the sand. Thus ended a 600-kilometer test transition amphibious tanks T-37 on the rivers Luga, Shelon, lake Ilmen and further along the new Ladoga canal and the Neva river.
The development of armoured fighting vehicles, capable of without prior training to overcome water obstacles, began in our country in 1932. One of the defense plants under the supervision of N. A. Astrov in a short time the company built a small amphibian tank T-33 armed with a 7.62 mm DT machine gun mounted in the tower. Later PA the basis of units of the car AMO-2 produced a test series of amphibious tanks T-41 with similar weapons.
The experience of the constructors allowed in the same year to start the construction of a series of floating tanks T-37. Soon these machines entered service with the reconnaissance units.
Tanks T-37 went on the water with a propeller, the control is carried out the tail feather of the ship type. A modernized version of the T-37A had a propeller with pivoting blades, providing thrust reversal.
Long run confirmed the high reliability and high performance amphibious when driving on both land and water and has significantly accelerated the further improvement of machines of this type.
The further development of Soviet amphibious tanks were the T-38 and T-38M-2. They all had bullet-proof booking, a light machine gun armament, carbureted engines and a crew of two. Amphibians developed enough at that time, speed: on land about 45 km/h and water to 6 km/h. among their advantages, significantly prodasih production, include the fact that all of them were created on the basis of the automobile units.
Low weight and small dimensions allow to use these machines for airborne operations. While the T-37 and T-38 was suspended under the fuselage of heavy bombers TB-1 and TB-3. This landing was successfully demonstrated in the teachings of the Kiev military district in 1935. 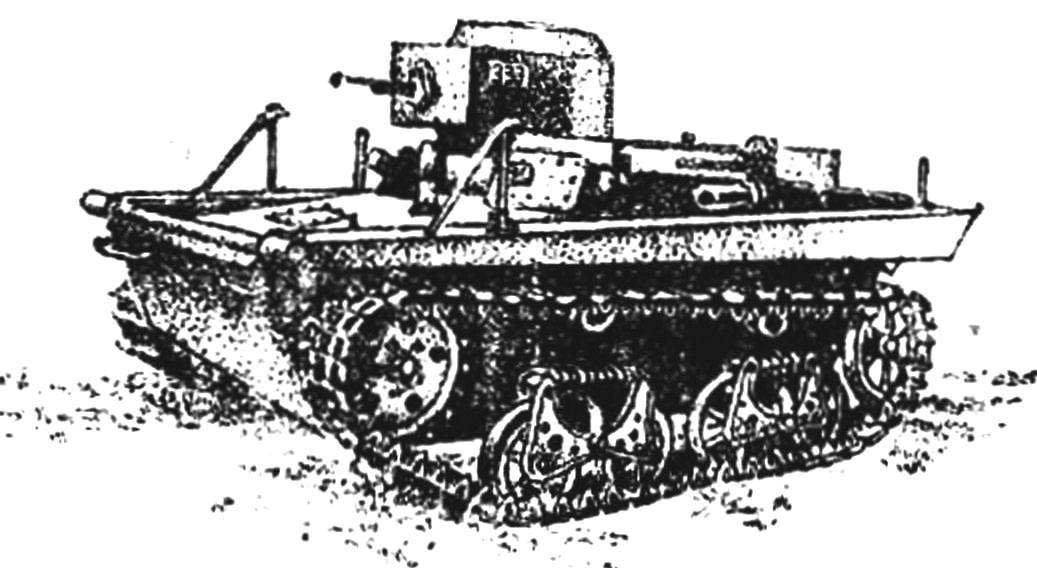 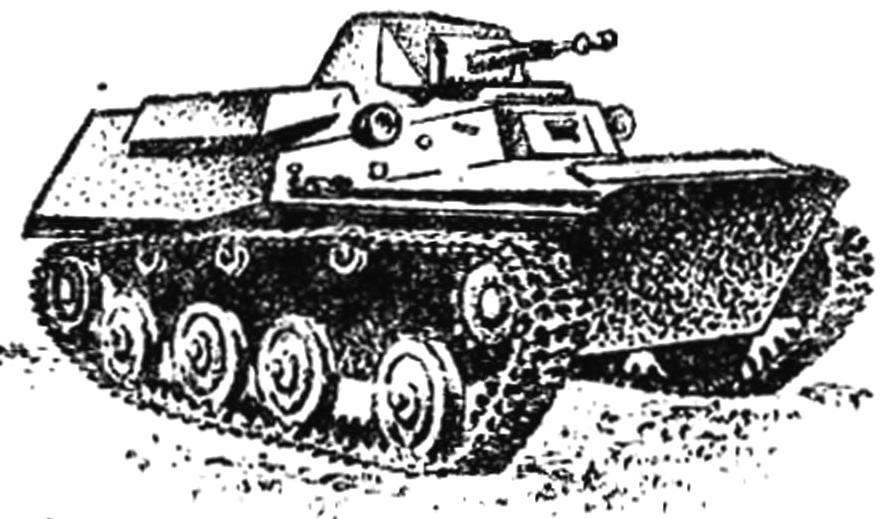 Light amphibious tank T-40.
And yet these amphibians can not be called successful, because of the possibility of their operational use remains very limited. The reason — the lack of the reservation (only 9 mm) and light weapons. Having crossed the first on the beachhead, they were unable to repel the counter-attack of tanks and cannon, to hit anti-tank firepower of the enemy and to build on the success of their infantry.
Therefore, in subsequent developments, attention was paid to increasing the armor and weapons. To combine quite satisfactory parameters of the buoyancy of the reservation, and arms rigidly connected with each other, the first largely managed designer N. A. Astrov. The thickness of the armor corps and head of its new T-40 was 14 mm, against light armored targets it was established large-caliber 12.7-mm DShK, and for the destruction of enemy forces — 7.62-mm machine gun DT. Although the weight of the tank and increased to 5.6 t, the buoyancy remained good. The engine of the car ZIS-5 with a power of 85 HP provided the tank speed up to 44 km/h on the highway and 5-6 km/h on water.
In the chassis used wheels with rubber tires and torsion-bar suspension, creating a smooth and silent stroke. Some of the tanks’ equipped with rollers with needles without rubber bands. Good traction was achieved using Malcocinado tracks.
Convenient arrangement provided a clear view of the driver with forward and partially to the side, and well-chosen center of gravity did the tank stable in the water. Although the car was intended for reconnaissance, in 1941 it was put into operation armored brigades, where in conjunction with medium tanks they brought considerable benefit in the initial period of the great Patriotic war. It should be said that the end of the 30-ies of tracked armored floating vehicles was neither our enemies nor allies, although they were developed in the USA by designer Kristi, Italy — firm “Pavesi” and Nazi Germany was conducted on the basis of captured in occupied Czechoslovakia tanks to produce floating F-IV-H & F-IV-M Only in the course of the war began to come to the US army floating machine LVТ family in England — a small number of DD tanks, and in Japan — amphibian “Camisa”, which could overcome water obstacles only after delivery of special floats, made by the body configuration.
After the war greatly increased demands on an armored tracked vehicles, but as to overcome water obstacles, and other qualities: protection from enemy fire and firing efficiency. The caliber of tank guns 37— 76 mm increased to 85-122 mm, the thickness of the armor corps has increased several times. It was natural for the demand to floating cars to hit the concealed firepower of the enemy, and if necessary to repel the attack tanks. In addition, they should be able to fire Afloat, before the approach to the enemy coast. 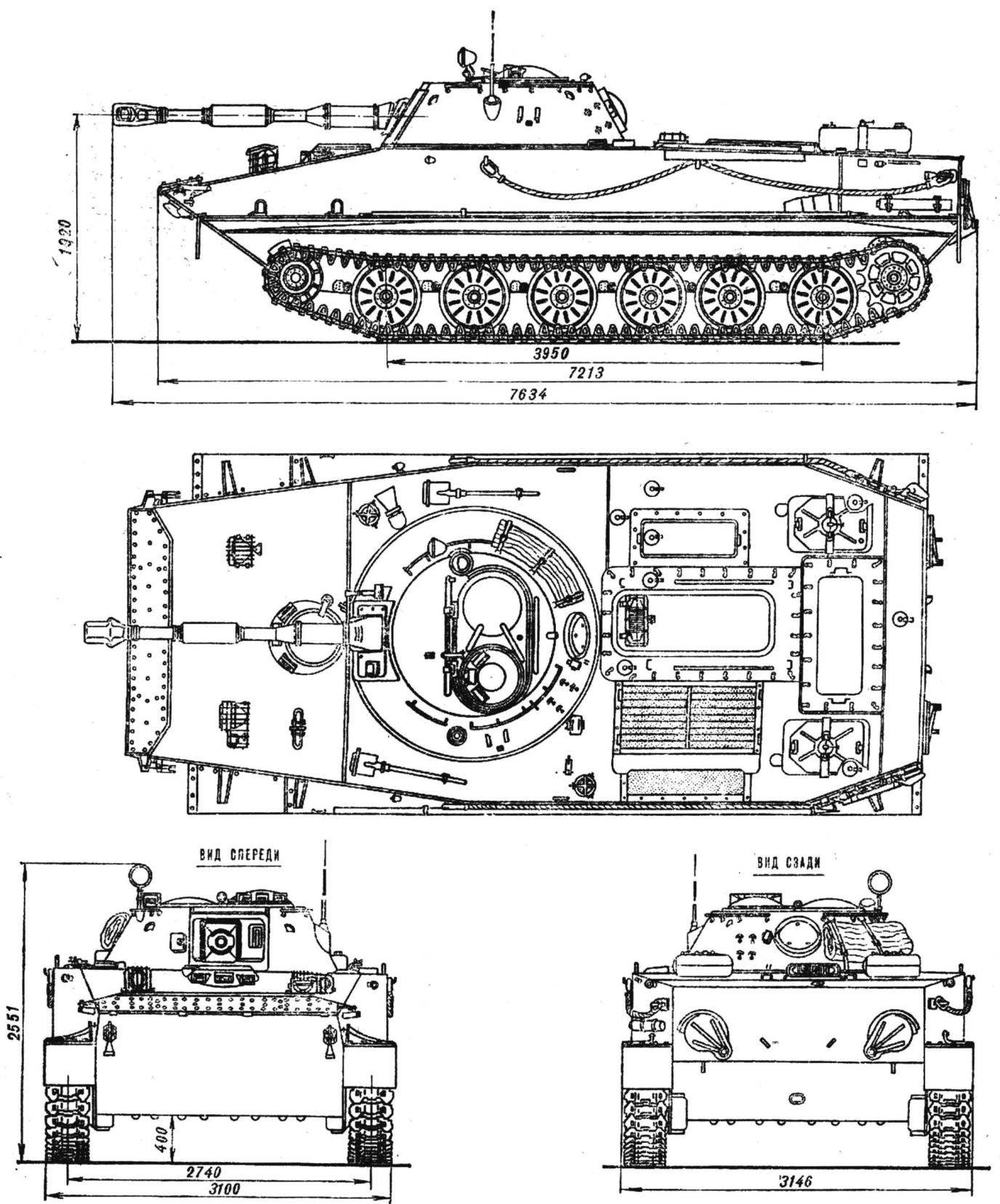 Amphibious tank PT-76.
Given all this, it was necessary to develop a floating tank with good protection (optimal weight), buoyancy and stability of the PA of water, including in marine areas, equipped to the same effective weapons. Solving these issues required to choose the best type of propulsion afloat, resistant to shore underwater obstacles and is able to provide movement and in deep water and in shallow water, in the shallows and on muddy ground.
Soon after the war of the PA service with the Soviet Army did amphibious tank PT-76. In comparison with their predecessors, T-38 and T-40 as well as the American floating tank LVТ(A) it was a new fighting machine, able to conduct reconnaissance operations, combat armored vehicles of the enemy, to overcome marine and riverine obstacles to land amphibious vehicles in the water I directly on the beach, with the course of engaging in battle.
The designers used this tank a completely different mover to move on the water — jet produces thrust when throwing water across the output of the camera at high speed. When you enter the water and onto the shore can work simultaneously tracked and water-jet propulsion, facilitating movement through the shallow water, when the caterpillars still touch the bottom. When moving on land, water cannons disabled. The use of the jet principle of motion allowed to abandon the helm of the ship of the water type. Afloat tank is controlled by changing the direction of the spray is due to the rotation of the flaps.
The tank units, mechanisms, ammunition located so that the center of gravity as low as possible: this is necessary to enhance stability. Derived from the equilibrium sea wave or close burst of a shell, the tank quickly regains a stable position. A hermetically sealed housing and sealing turret allow amphibians to get in the water with large pitch, roll, swim in heavy seas, and navigation equipment enables to make significant transitions sea.
The armament of the PT-76 is much superior to the previous samples of the floating technique. He is armed with a powerful 76-mm gun D-56ТМ and coupled with it machine gun 7.62 mm. Ammunition gun consists of 40 unitary shots and the machine gun attached 1 thousand rounds in belts. Armament supplemented by one AKM assault rifles, 15 grenades f-1 and 20 rounds for the flare gun.
Fire from guns and afloat, despite the fact that the turret at this time, tighten the seal. With the remote control commander, who is also the gunner, gives the driver a command to change the angle of movement of the tank relative to the target. In the vertical plane of the gun is in the usual way. 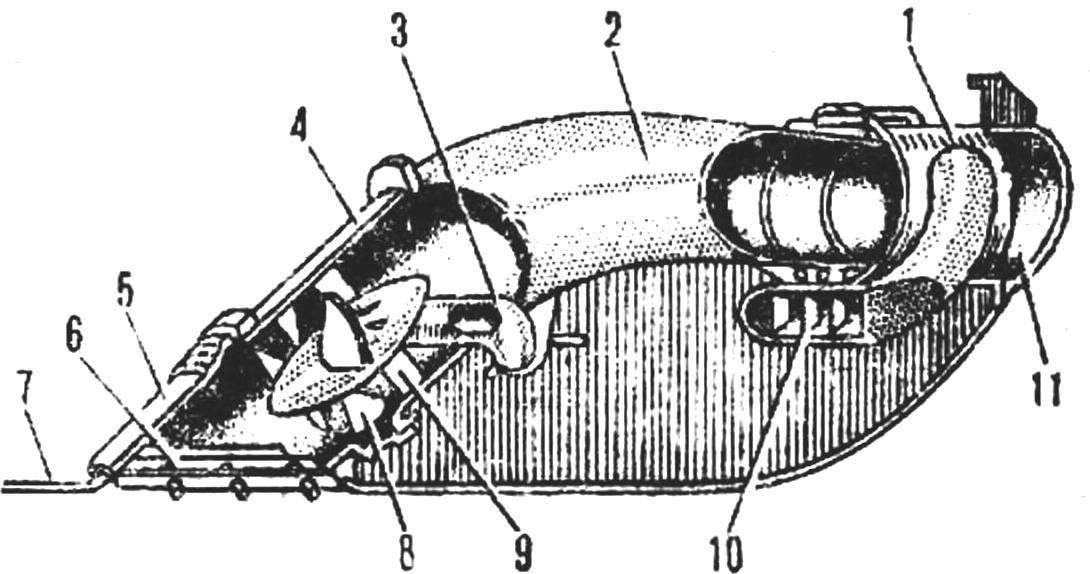 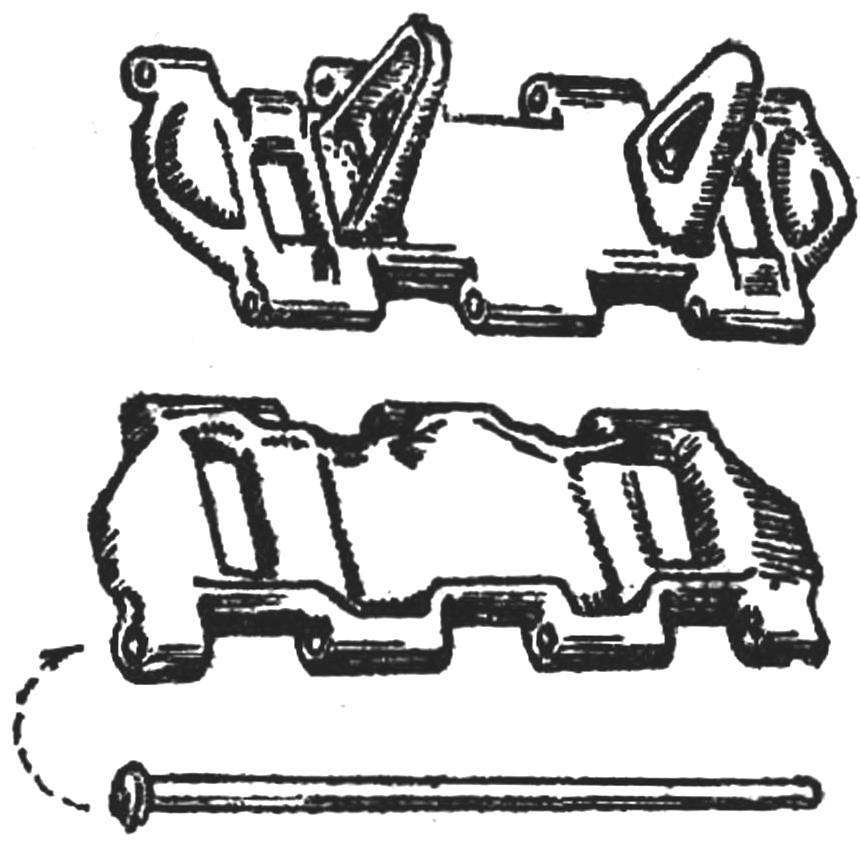 Tracks: with a crest (top) and without comb.
Powerplant amphibians — diesel engine V-6 rated at 240 HP provides the movement with a maximum speed of 46 km/h on land and 10.2 km/h on the water. Engines-2 medium tanks of the previous editions has been double, a V-6 under the same Carter had one block six the same as that In 2 cylinders. Power train consists of a traditional five-speed gear box used in sneakers, T-34, of steering clutches and two internal gears that transmit rotational force to the cannons, allowing them to be used together with the caterpillars separately. The exhaust device of the engine is protected against the ingress of water into the cylinders when the engine is stopped. Provided the system is pumping water that has penetrated into the body.
Engine smoke generator (TDA) is used to create a smokescreen length of 300-400 m. the commander and the driver have night vision devices. In the daytime the crew is monitored by a periscopic devices.
In case of fire in case of combat damage in a tank is fitted with fire fighting equipment. With the appearance of smoke and flames in the engine compartment, the signal from the sensors actuates a control mechanism cylinders with carbonic acid. Possible and manual control of the system.
The tank is not terrible roads, wetlands and snow. With a weight of 14 tons specific pressure is only 0.5 kg/cm2. Even the illustrious thirty-four it was half as much.
The second modification of the tank PT-76B — you’ll be installing a two-axis stabilised pointing gun D-56ТС, allowing to fire on the move. Conditions length crew members in a tank is improved by the application on the barrel of the gun ejector, suction powder gases from the gun barrel after firing. The mode of operation of the sliding-rolling devices is improved by the introduction of the muzzle brake with an effective braking.
PT-76 with the image of the naval flag on the turret can be seen on all the fleets of our country. No doctrine of the marine corps is not complete without these light machines, confidently handled from one wave to another. One after another they come out with the ramps of the landing ships into the water and the first wave of Marines coming to shore, firing from cannons and machine guns. Behind main battle tanks in armor and armament, they are ahead of them in mobility when crossing water obstacles, open the way to land on the shore of medium and heavy tanks, lead Marines, destroying artillery fire tracks of fire of the enemy, destroying engineered barriers, capturing the best lines of defense and their starting POSITIONS for the offensive.
TIPS ON MODELING
Accurate reproduction of the external details of the hull and turret greatly increases the resemblance to the original. In front of the tank on the armor have two headlights, covered with gratings. The driver’s hatch is equipped with three observation devices. Tow hooks are arranged on the lower inclined armor plate sheet.
In the rear of the hull at the left side of the air inlet grille and diffuser of the ejector. The first is painted the same color as the body, the second — black.
On the tower top — headlight in black, on the body — protective. Gun can be equipped with a muzzle brake.
Road wheels have black rubber tires. The maximum number of trucks in caterpillar — 96. The tracks within the track of two types — with ridges and without them. Fenders, front and rear rubber mud flaps.
On the turret of a tank of white paint is applied to a three-digit fleet number and a symbol or part of a compound. Tanks belonging to the marine units, the tower is depicted as a naval flag.