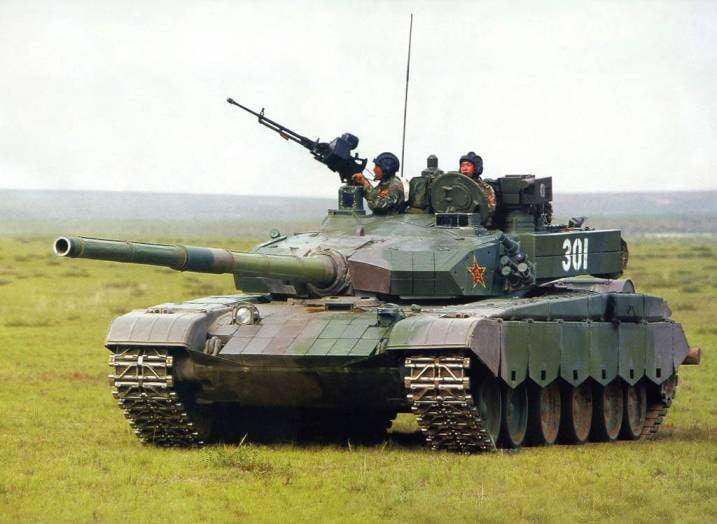 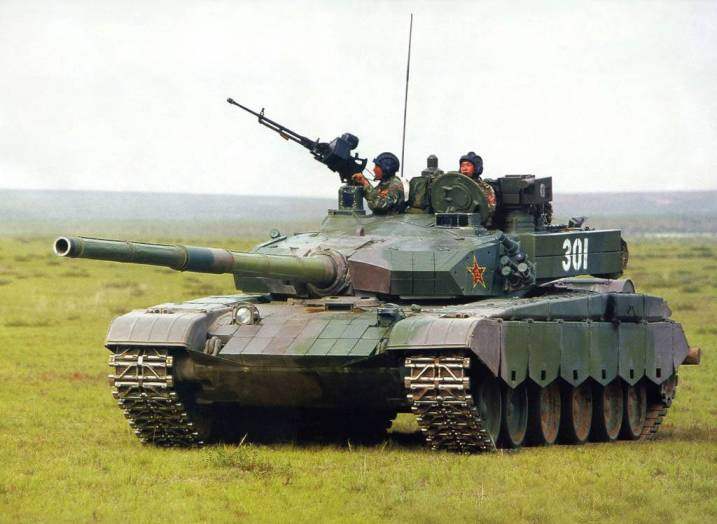 In 2009, the global military community stirred the sensational interview of the Chinese General designer main battle tank “Type 99” Joo of Aishana. It stated that “China has set up a new tank “Type 99” among the ten tanks of the world occupies a leading position on three important indicators of combat potential of the firepower, mobility, protection, and it may be rivaled only by the German Leopard 2 and the American “Abrams”.

Zhu Yishan also noted that the “Type 99” is fully developed by the Chinese and represents “the result of the work of three generations”.

However, although the Chinese tank builders and declare that “we should not slavishly follow someone else’s trends, otherwise, we are doomed to lag”, they are not passed improvements to existing designs and even direct copying of individual parts and assemblies, weapon systems, fire control, protection of the modern machinery of Ukraine, Russia, Israel.

And yet no doubt – new machine is a breakthrough in Chinese tank manufacturing and demonstrates a high stage level of military-industrial potential of China.

Main battle tank “Type 99” (ZJZ-99) is the latest from the chain samples of “Type 90”. North China Institute of mechanical engineering No. 21 (NEVORI) in Beijing and the First multinational Corporation (FIRMACO, a former factory No. 617 in Baotou in Inner Mongolia) continued and further modernization of the machine “Type 98”, which were, in fact, the prototype of the new tank. The main directions of improvements were: increased mobility by installing a more powerful engine, increased protection through the installation of built-in dynamic protection, the improvement of the fire control system.

Technical solutions tested on the samples “Type-90II/MBT-2000”. The first 40 tanks of the Chinese industry produced in 2000, In recent years in service of the people’s liberation army of China received 200 (according to other sources, 100 or 400) units “Type 99”. They are in the tank connection Shengenskogo and Beijing military districts. 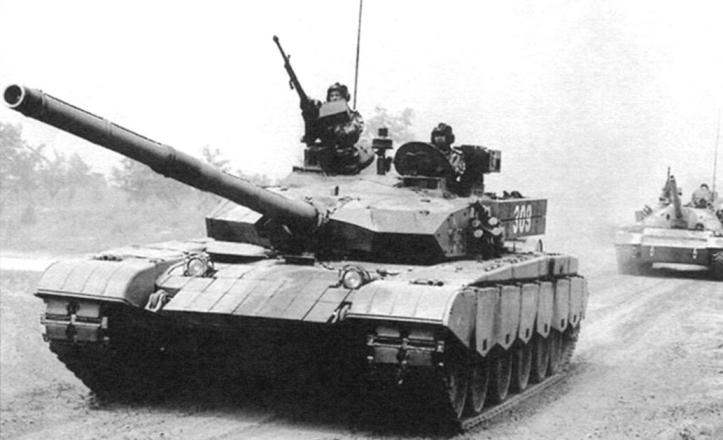 MBT “Type 99”, in the opinion of foreign experts, despite assurances from the Chinese that is entirely Chinese tank has the shape of a massive Soviet tank T-72 and developed according to the concept of the Soviet school of tank.

The layout scheme of the machine-traditional the driving compartment is in the front, engine in the rear. His body a few dips in the front to install massive towers and back – to accommodate a larger engine (compared to T-72). The upper frontal part of the hull is almost identical to our tank. Gun-the Chinese version of the Soviet 125-mm. Tower, their design is very similar to foreign tank turret, and the engine established on the basis of German.

“Type 99” has a low silhouette: 400 mm below the German “Leopard” 2A6 and 200 mm below the American “Abrams” M1A2, which testifies to the compactness of the arrangement of its components and mechanisms. This shape reduced frontal projection and thus reduced the probability of defeat increased the survival rate.

The hull and turret have tselnosbornye steel construction. Booking – composite: composite material layer is between sheets of steel armor. To enhance the armor protection of the frontal part of the body applied to the installation of the built-in batch-modular blocks of dynamic protection (DZ) on the main armor. The tower blocks are located “corner”. Additionally they closed the sides and extended aft niche. DZ is also multi-layered and provides protection from armor-piercing and cumulative shells. Such a scheme of reservation have upgraded tanks “Type 96” and Pakistani “al Khalid”. 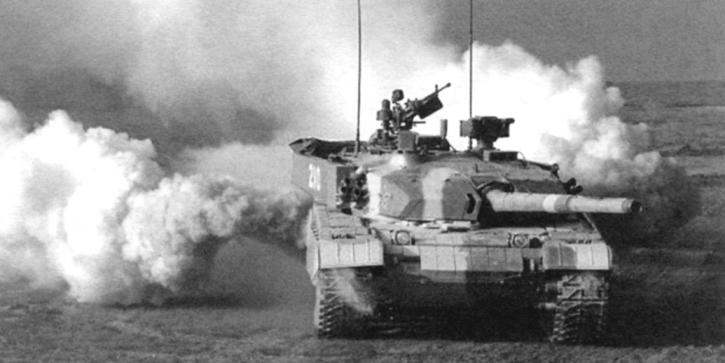 The output of the tank in attack 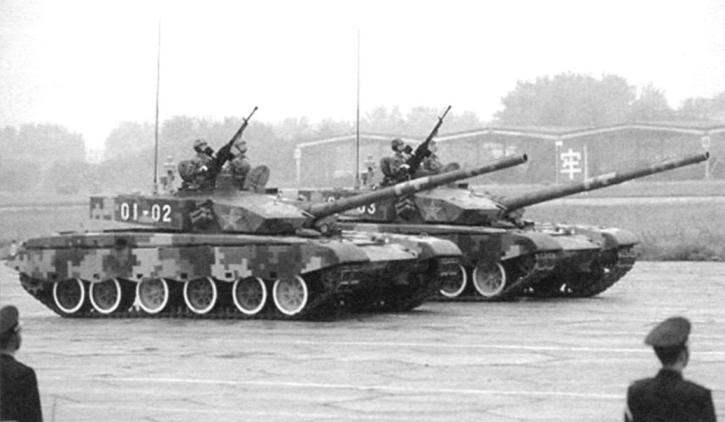 The configuration of the tower in the process of production of the tank was changed. So, the first samples of armor on its “cheeks” grows forward, and then a sidelong look from the sides, amplifying blocks RS. The blocks were installed on the roof, protecting it from heat shells, existing in the upper hemisphere. The use of modular units allows booking in case of damage to produce rapid replacement.

Experts draw attention to the fact that through the placement of additional equipment and anti-tank in the tower, it had to do more massive than the prototype of the “90”. This resulted in some valance between the housing and the tower, in contact with the projectile which increases the possibility of destruction of the tank due to the separation of the tower from the hull.

Powerplant the tank “Type 99” such is placed on the sample of “Type 90-II”, but was a significant rearrangement, resulting in significantly reduced height of the engine-transmission compartment.

The transmission is mechanical – planetary manual control with seven speeds forward and one back. Suspension torsion bar with hydraulic shock absorbers on first two and last nodes of the suspension. Gable has six rubber bands, four rollers and supporting roller on each side. Sprocket – rear gear – cycloid.

The caterpillar is equipped with a rubber joint.

Foreign experts believe that such transmission is completely borrowed from our tank T-72M.

The main armament-125-mm smoothbore gun, which is the processing of our tank gun 2A46. The trunk is covered with its insulating jacket.

Deputy chief designer of the tank “Type 99” van Jason believes that according to its characteristics, the Chinese version of the gun substantially superior to their foreign counterparts – German KN-120 installed on “leopard” 2A5 and the “Abrams” M1A1, and our Russian 2A46M-1. 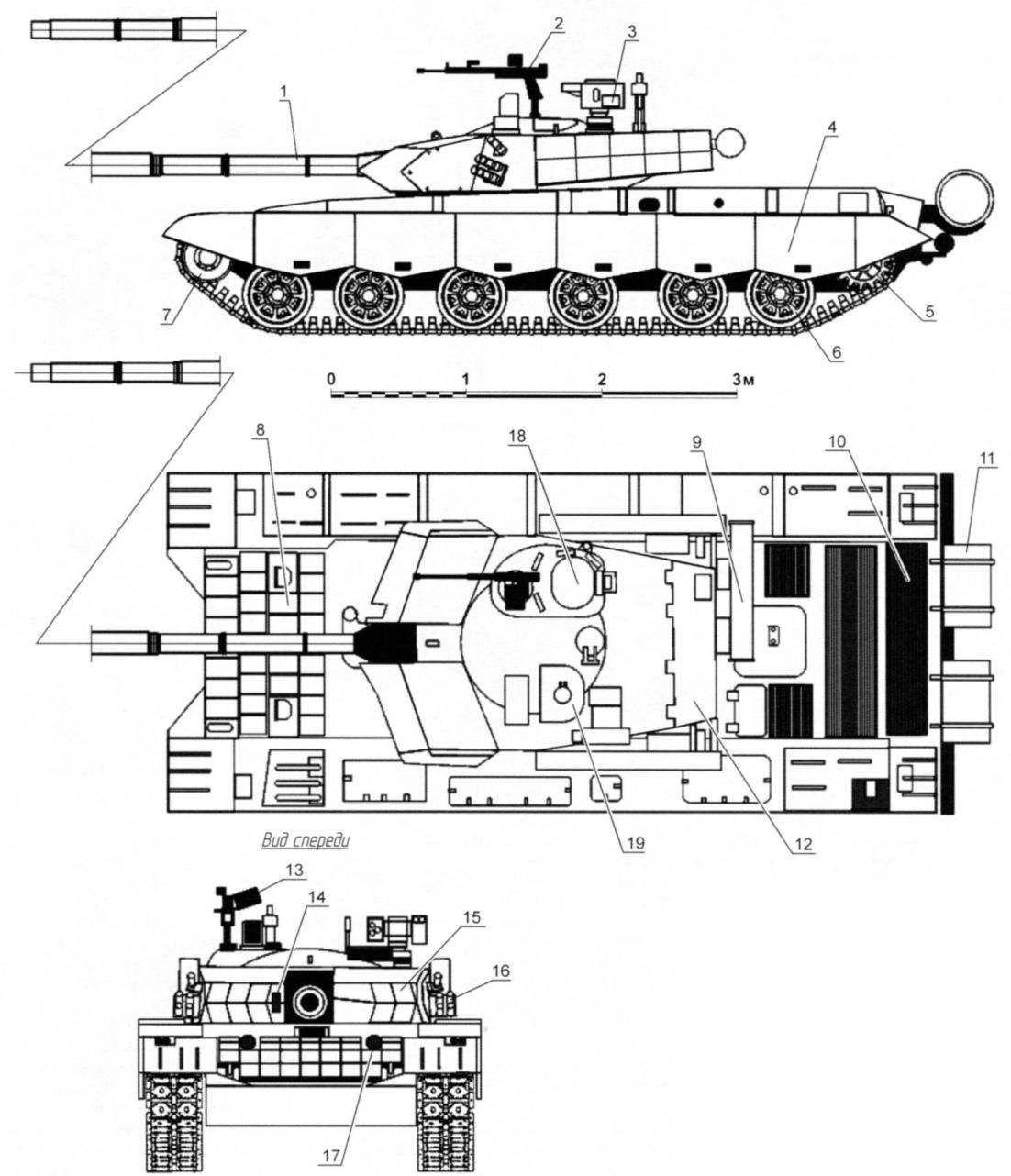 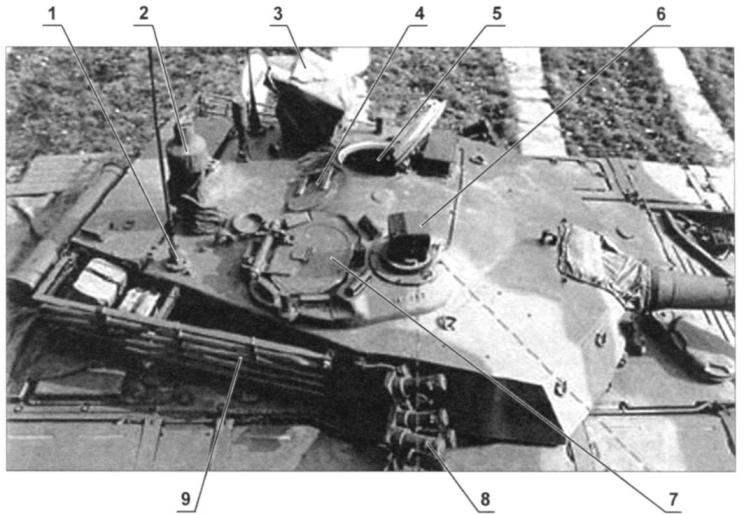 Ammunition is 42 (41) shots separately-tubular loader. Shells – cumulative, high-explosive, armor-piercing. There is evidence that munitions are produced by cores of depleted uranium on the technology provided by Israel. They have a ratio of length to diameter 20:1, the length of the core is about 680 mm and a diameter -33,9 mm. the Initial speed of the projectile – 1700 m/s.

The same van Jason claims that their tank’s gun with the use of projectiles with a tungsten core is able from a distance of 2000 m to penetrate homogeneous armor thickness of 850 mm, whereas the gun “Abrams” M1A2, for example, with the same distance – 810 mm, Japanese tank “Type 90” – 650 mm.

Hydromechanical autoloader carousel has 22 shot. It is also similar to the automatic loader of Soviet manufacture, although it made some changes.

It is also possible the location of the complex guided weapons with anti-tank guided missiles ATGM 9М119 “Reflex”.

The fire control system of tank includes a combined panoramic commander’s sight, gunner’s sight with integrated laser rangefinder and a television channel, two-plane armament stabilizer, digital ballistic computer and sensors of atmospheric conditions, barrel wear, etc. the Tank is equipped with an information processing system from the surveillance that reflects the situation on color displays, allowing in real time to monitor the battlefield. The imager provides the ability to track the situation at night and during heavy smoke. In addition, the installed navigation system with inertial and satellite channel GPS also displays the data overlaid on a digital map. Fire can lead not only the gunner, but the tank commander, who also has to monitor six panoramic periscopes. 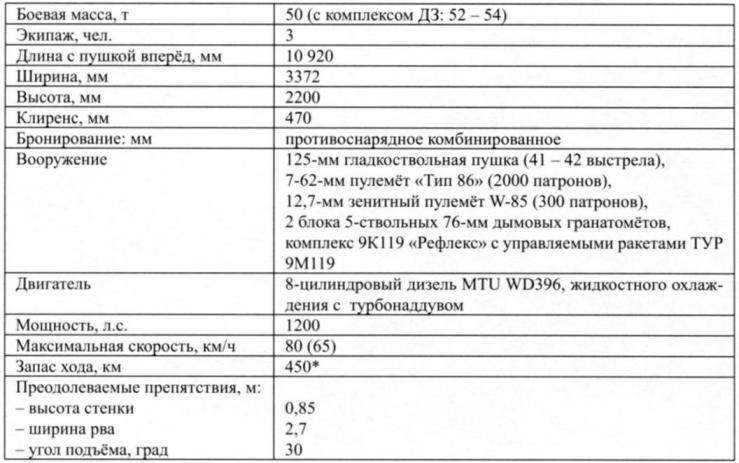 TACTICAL AND TECHNICAL CHARACTERISTICS OF THE TANK “TYPE 99”

“Type 99” is equipped with an integrated laser complex active opposition JD-3, consisting of a built-in laser rangefinder sensor, the laser-warning LRW, quantum generator ZM-87. When receiving a signal on irradiation of the laser beam machine of the enemy warning system issues a command to rotate the tower towards the source. In this case turns on its own laser beam, but low power, which determines the exact location of the enemy. Further, the power beam abruptly increases to a critical level, disabling the detected optical means. The LRW sensor and the generator of the ZM-87 is located on the roof of the tower at the stern. The maximum power of the laser is 100 MJ. According to reports, laser system the tank operates at a distance of 2 – 3 km it is Argued that it is striking and head of the incoming anti-tank missiles.

Possible location on the tank also the active dynamic protection, destroying anti-tank rockets and shells on approach to the car.

China is the modernization of the tank “Type 99”. In recent years, it has developed a modification of the “Type 99А2”, equipped with active armor, improved engine, electronics and mechanics. However, it is believed that it is based on the Russian T-80, which is, in fact, the development of T-72.

There is no doubt that Chinese industry has created a promising tank of the third generation. According to Western military experts, the “Type 99” could create serious competition to all currently in service machines. But China manufacture new tanks in small quantities, in small batches. Presumably, the high cost of production. The cost of one unit is twice higher than other major Chinese tanks. In addition, a heavy machine weighing 50 – 54 t do not stand up to bridges on local roads, it has limitations on rail transportation. The new tank will probably go into service only the elite tank units.

The country has established mass production of two types of cheaper in the production of tanks “Type 88В”, equipped with 105-mm gun, and “Type 88С” with a 125 mm gun, replacing the currently in the army outdated “Type 69”.