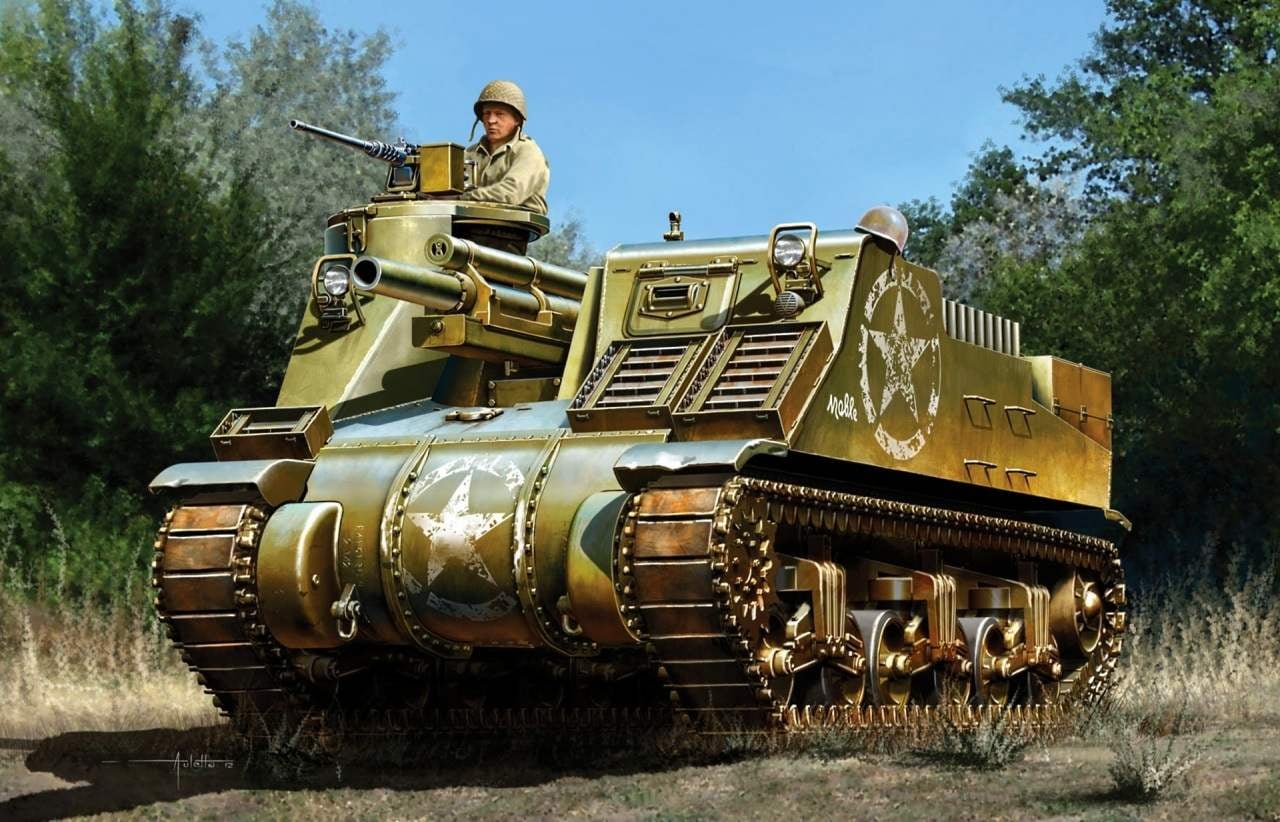 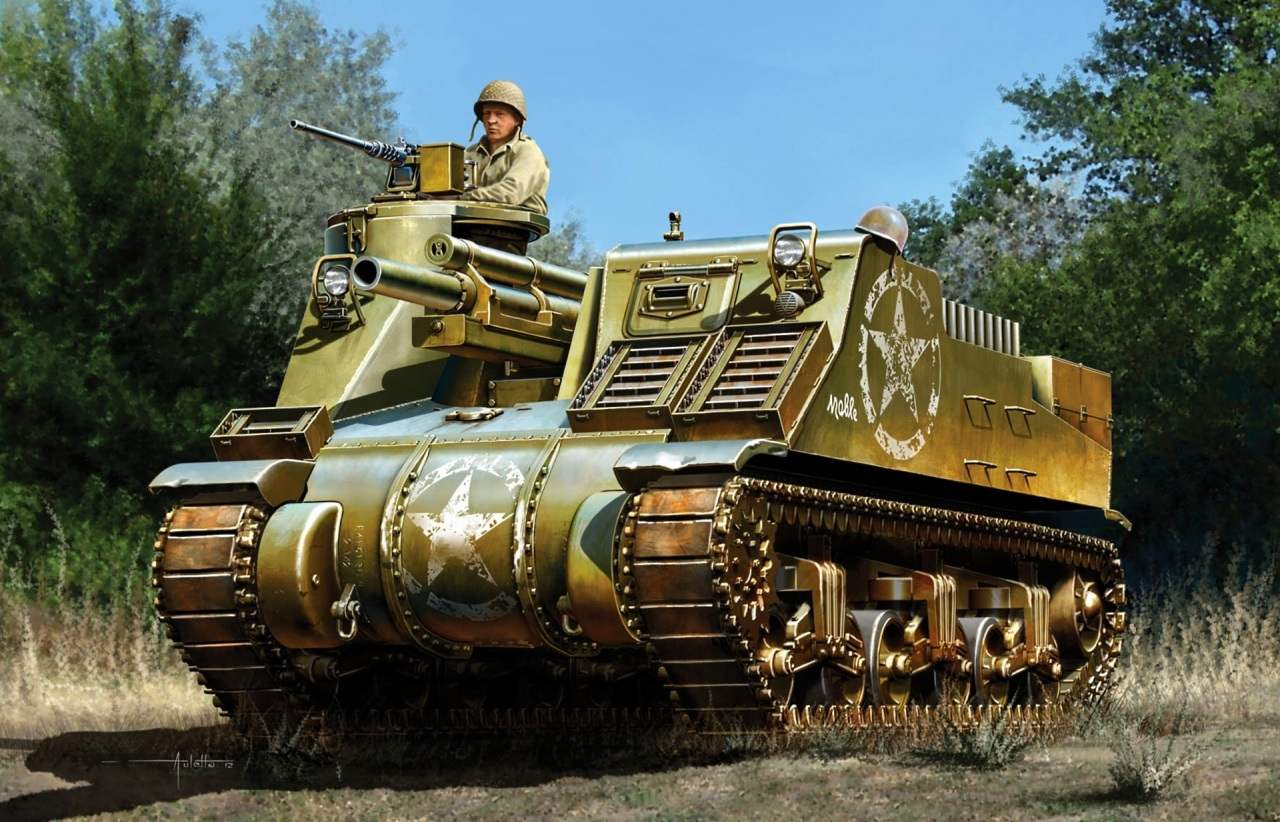 From the beginning of the Second world war in the United States of America closely followed the fighting in Europe and I must say, doing generally the right conclusions from the experience of others. In particular, did not go unnoticed and the first evidence of the use by German forces self-propelled artillery. In 1940 the Americans launched work on the creation of artillery systems of similar purpose. As in the case of self-propelled tank destroyers (“modelist-Konstruktor” No. 1, 2002), the first versions of ACS, armed with field howitzers, was established on the basis of half-track armored personnel carrier M3. On the first set, the swinging part 75-mm mountain howitzer M1A1 on the second — 105-mm field howitzer М2А1. These machines received the designation T30 T19 NMS and NMS, respectively. The abbreviation NMS stands for Howitzer Motor Carriage, which literally means “the engine crew howitzer”, but in the semantic — self-propelled howitzer.

Neither one nor the other car was not standardized, which explains the presence in their indexes of the letter T, which received only prototypes or prototypes. However, they were found partially fit, and for lack of a better commercialized (released 500 units of T30 and T19 324).
In bulk quantities, these machines produce as the half-track armored vehicle was too unreliable a platform for artillery. And if relatively lightweight 75 mm howitzer was he still “on the shoulder”, then the weight and force of the recoil 105-mm gun he kept with difficulty. However, both self-propelled guns had to do some fighting in the Philippines, North Africa and even in Italy, and everywhere they suffered heavy losses.
Meanwhile, in October 1941, on the initiative of the then commander of the tank troops of the U.S. army of major General Jacob Devers of the firm Baldwin Locomotive was manufactured and sent for testing at the Aberdeen training ground in Maryland two prototypes of the 105-mm self-propelled howitzer using the chassis of the M3 medium tank. The machine was designated T32. In an open top stationary armor the cockpit of a rectangular shape on its standard carriage, including the lower part of the machine and the frame, installed a 105-mm field howitzer М2А1. After testing in Aberdeen in early February 1942, the machine was moved to Fort Knox, where experiments with self-propelled guns continued. The results of tests on the machines have increased armor protection of cuttings, reduced the angle of elevation of the howitzer and mounted anti-aircraft gun. In April 1942, SAU was accepted into service under the designation 105 mm Howitzer Motor Carriage M7. First serial self-propelled guns left the workshops of the company American Locomotive Company in the same month. Production continued until August 1943, when after the release of 2814 machines stopped it. However, in 1944 the production of the M7 resumed again — from March to October, issued 500 self-propelled howitzers. In March 1945, production of the M7 has joined the firm Fédéral Machine and Welder Company, brought together 167 combat vehicles of this type. 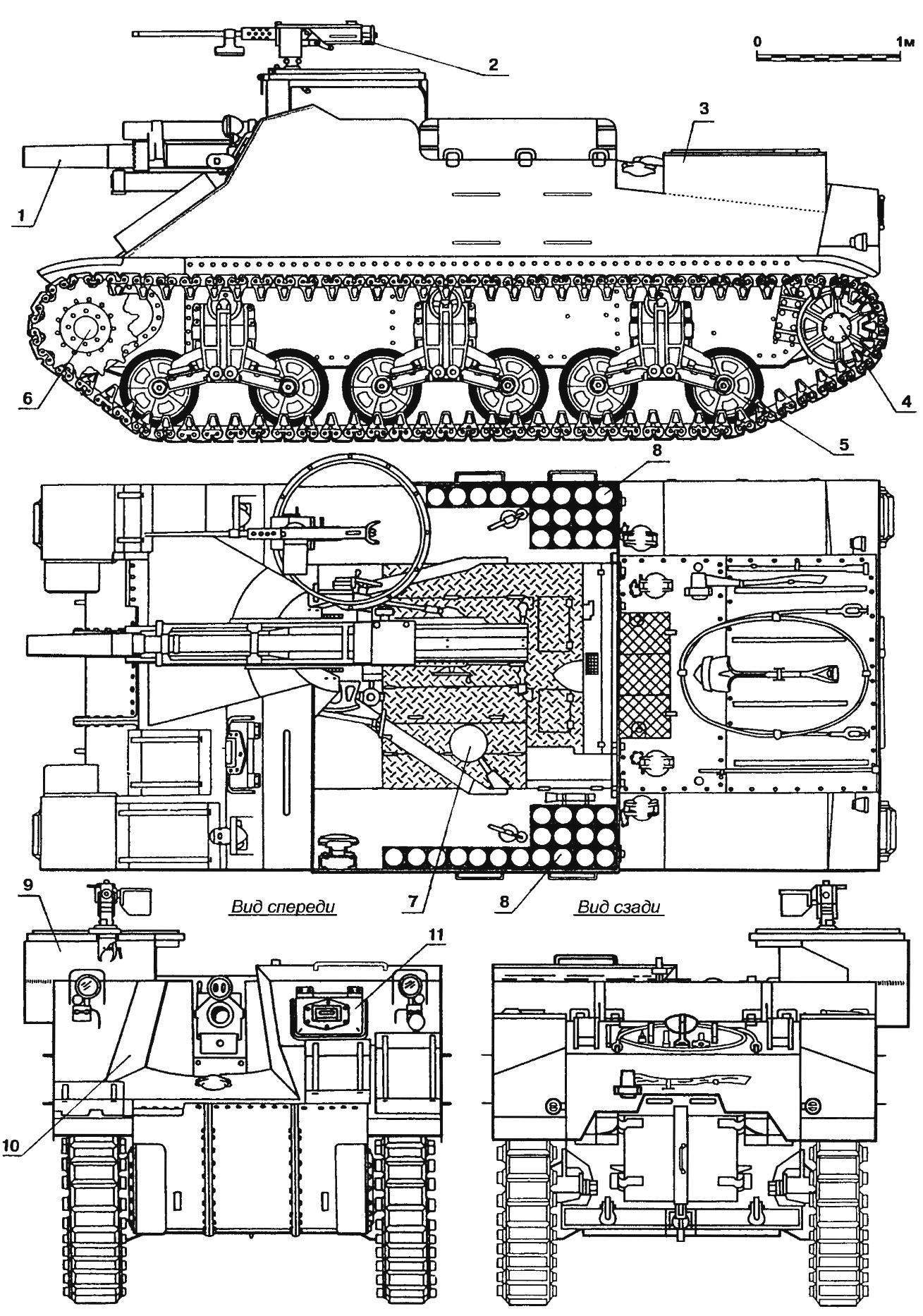 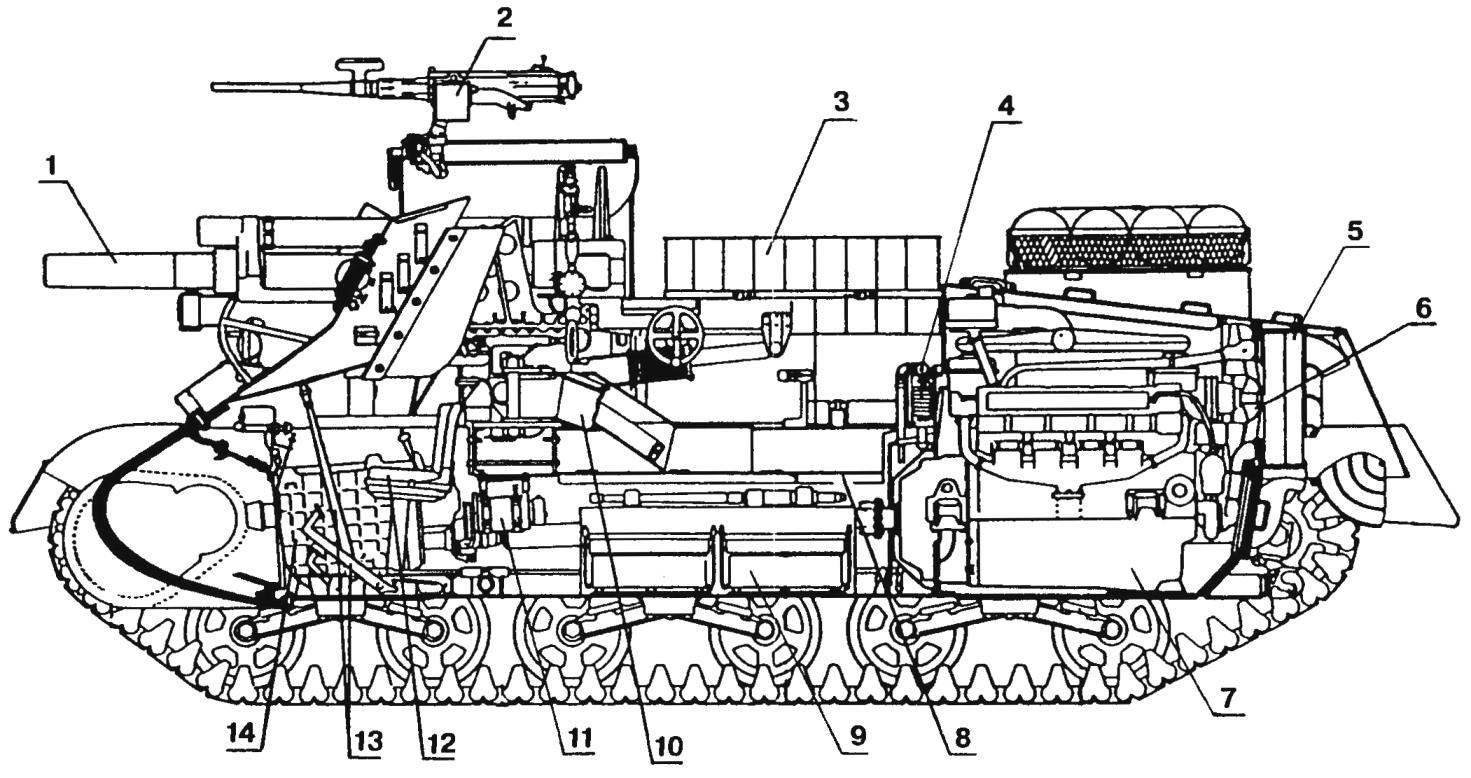 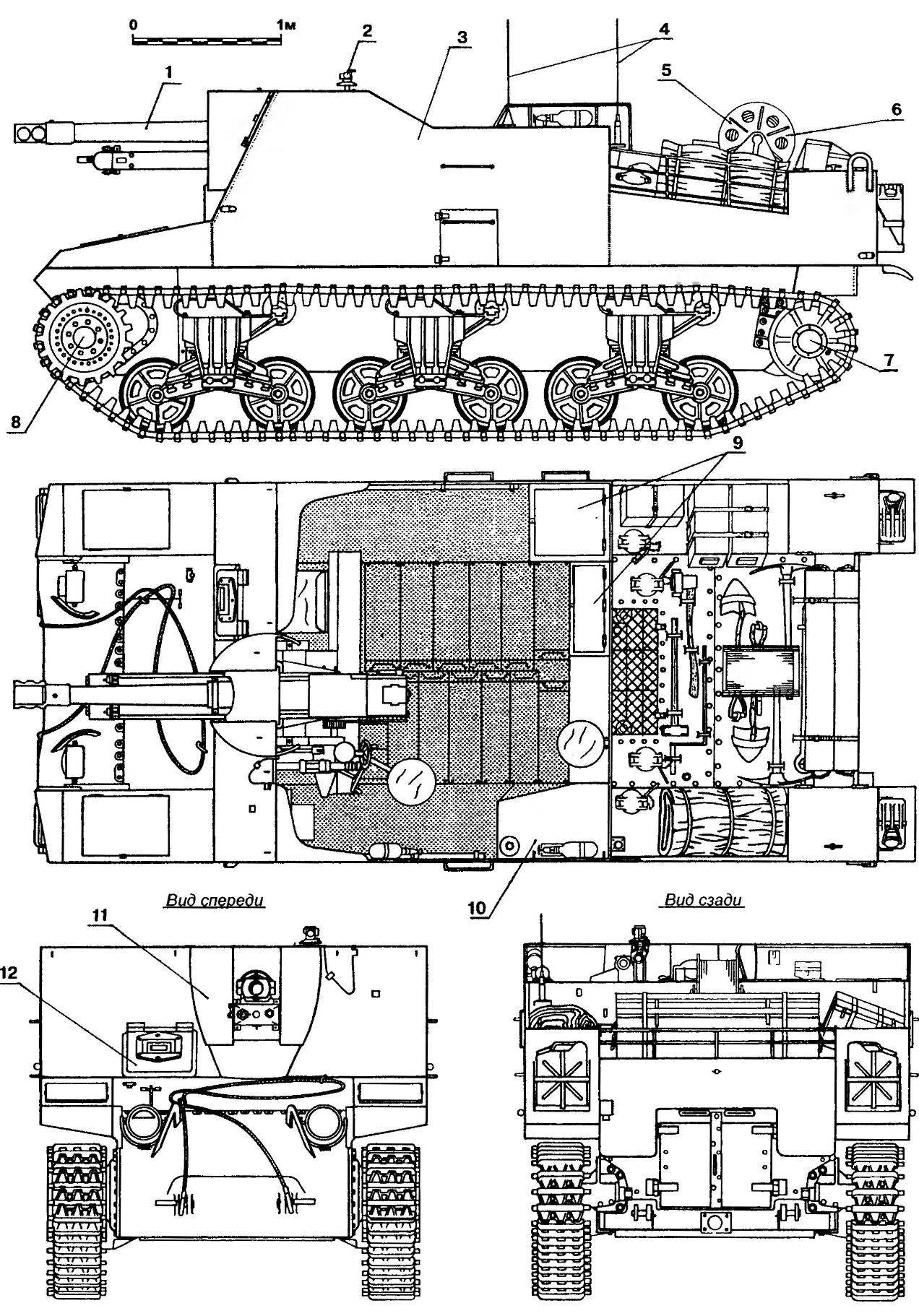 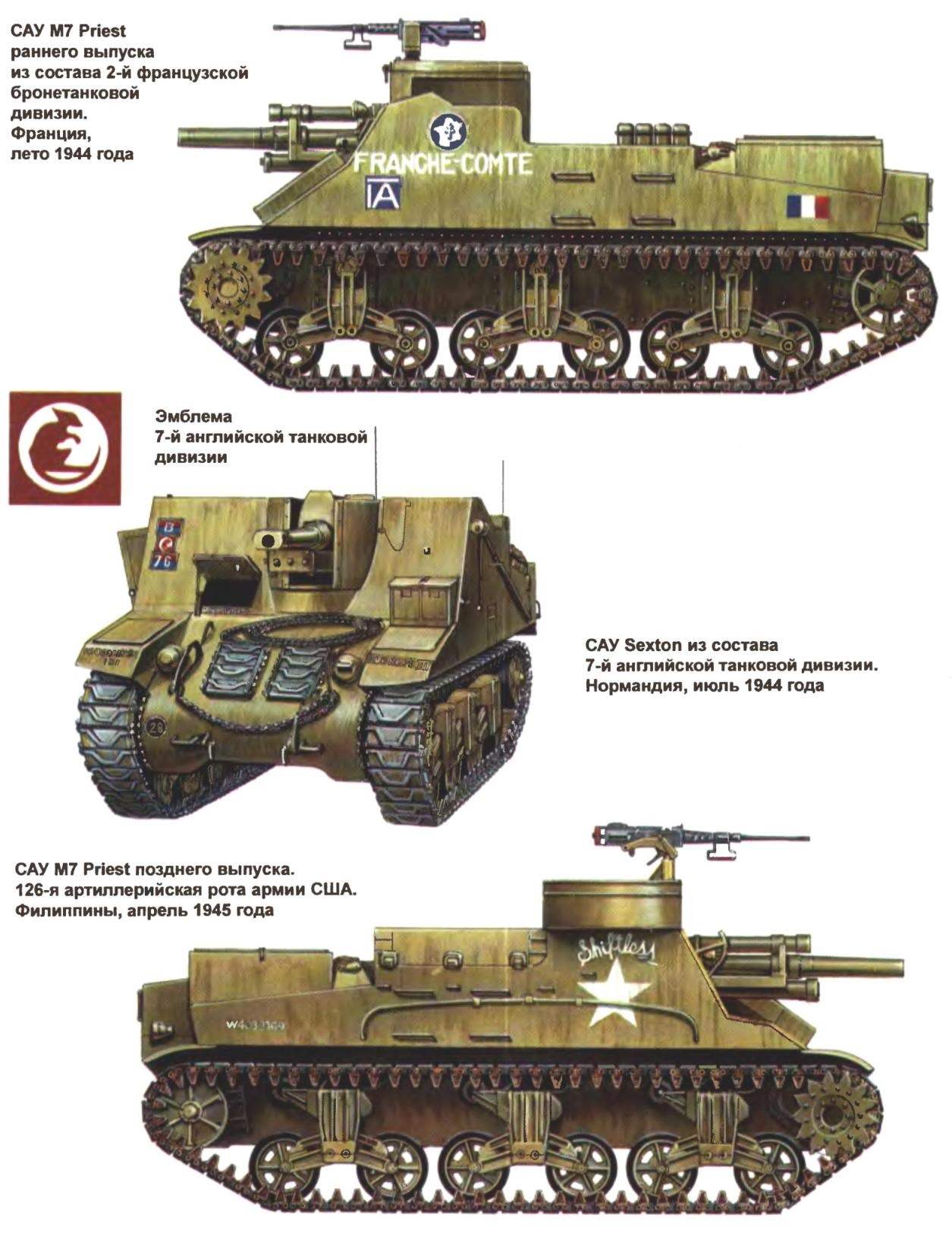