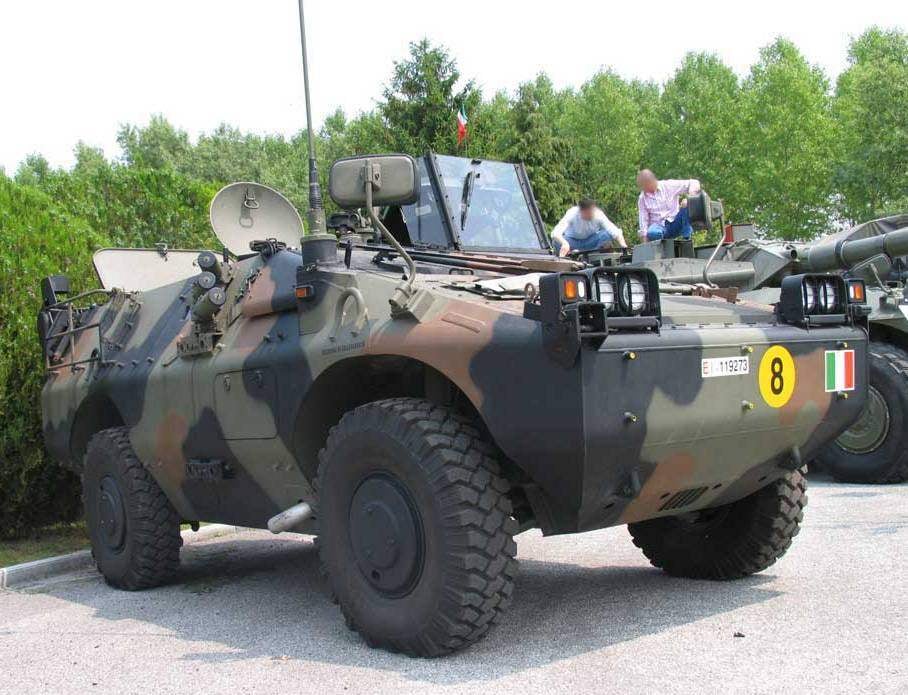 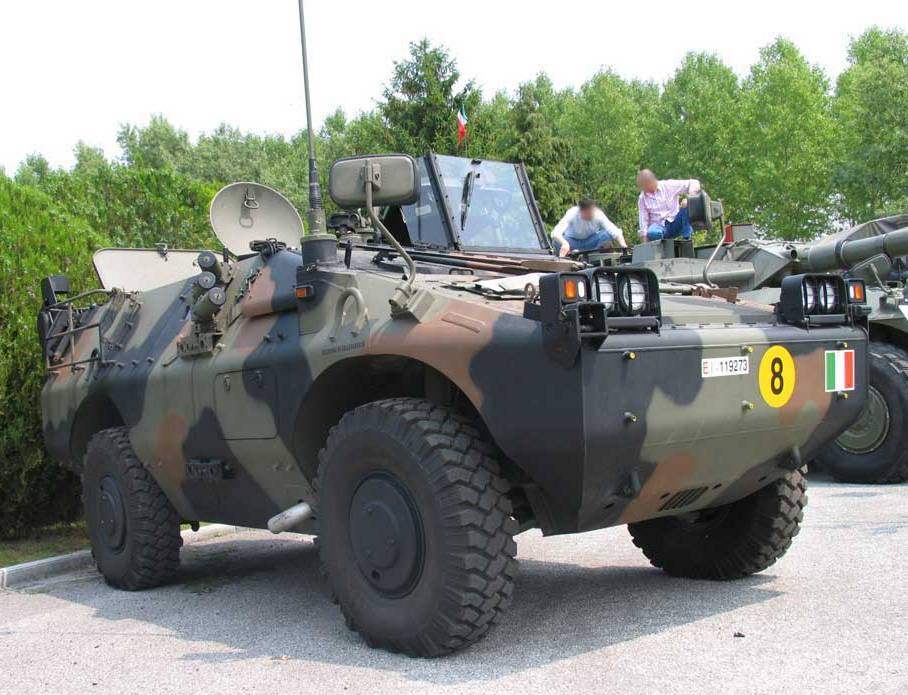 In the early 1980-ies of the IVECO group by order of the Italian army began construction of armored vehicle of a new family of wheeled APCS (4×4 and 6×6), received the official name of the Light Armoured Vehicle (AVL) 6634. The customer wanted to get some bigger machine and use it to solve a wider range of tasks together with fighters of tanks “centaur”.

Eventually came the armored personnel carriers “Puma”. His first prototype was ready in 1988 and the second in 1989. By the mid-1990s was built three prototypes, we finally acquired a vision of the future armored vehicle.
The Italian army has signed with the company IVECO contract to develop six specialized versions of the “Puma” for mounting various weapons systems (TOW anti-tank systems of Raytheon, Milan ATGM, SAM Mistral company Matra BAe Dynamics, 81-mm self-propelled mortar), and use it as an ambulance and mobile command post.
Arms bearers must have had a crew of three or four people.
The development of all variants of armored personnel carriers “Puma” (4×4), (6×6) was completed in late 1999
Then with the consortium IVECO-Oto was awarded a contract in the amount of 585 billion lire, involving the production and supply 250 armored personnel carriers “Puma” 6×6 and 330 — Puma 4×4.
Serial production of the BTR established at the enterprises of the concern IVECO at Bolzano, and the first production vehicles delivered in 2001
At the maximum production rate of 16 cars a month supply of the “Puma” to the customer was completed in 2004, VBL (Veicolo Blindato Leggero — light armored vehicle) — this designation was officially assigned to this APC in the Italian army.
“Cougars” in the configuration “4×4” in the Italian army equipped with five reconnaissance regiments with wheeled tank destroyers “centaur” (8×8). In each of the three reconnaissance squadrons of the regiment has three sections, consisting of two fighter tanks “centaur” and four cars “Puma” (4×4). BTR crew consists of six persons along with a driver that allows you to create two reconnaissance by two scouts each. 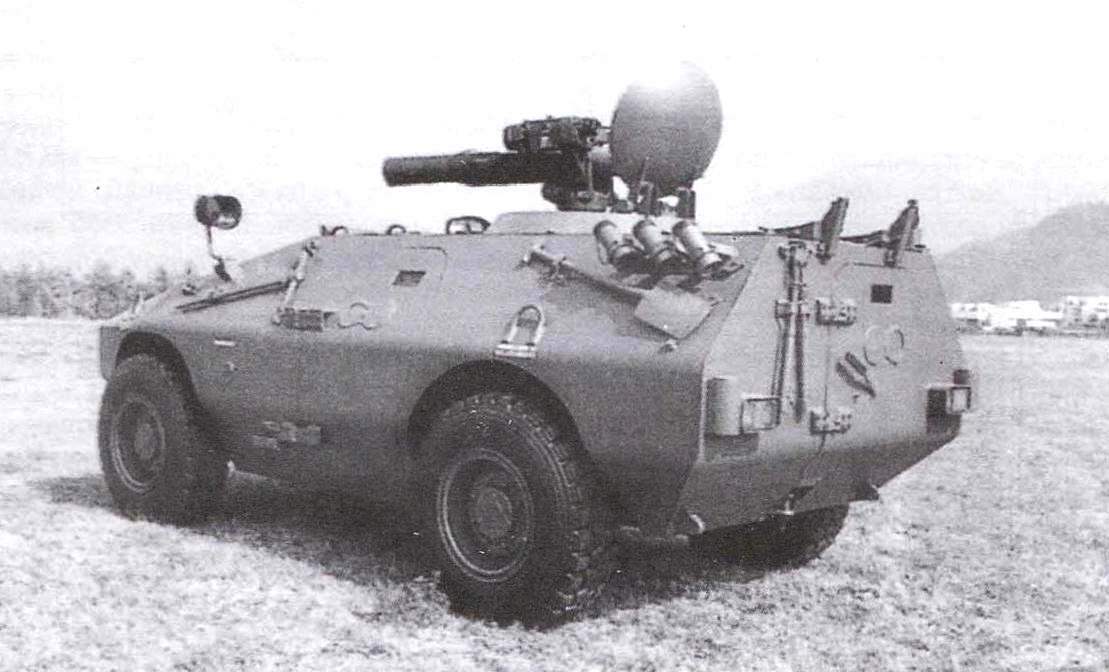 BTR “Puma” with the wheel formula 4×4 in the embodiment of self-propelled ATGM TOW
Armored personnel carriers “Puma” (6×6), equipped with light infantry, Alpine, airborne and army amphibious regiments. The crew of the BTR with a driver to seven people.
In addition to the delivered under the contract 580 machines “Puma” (4×4), (6×6) delivered two prototypes of armored personnel carriers equipped with Otobreda turret with a 12.7 mm machine gun, firing from which you can maintain the remote drive. The APC is equipped with a package of added armor.
If prototype testing is successful, it is very likely that all previously supplied machines will be upgraded. It may be signing an additional contract.
Specialized versions of the BTR “Puma” will also be produced in accordance with additional contracts.
BTR “Puma” in versions (4×4) (6×6) was proposed to the Ministry of defence of the United Kingdom in accordance with the requirements of the British government on the development of advanced machine and control (Future of Command and Liasion Vehide — FCLV).
Performance characteristics of wheeled armored personnel carriers “Puma” engines IVECO 8052 TCA

Case “Cougars” — all-welded, provides protection from small arms fire and shell splinters. Upper hull plates are inclined.
The driver is placed in front on the left side. It has a hatch opening to the left, in front of which there are three day periscope surveillance device. The Central device can be replaced by a passive night periscope for driving at night.
Engine-transmission compartment is located in front of the machine and separated from the crew compartment by a partition. Access to it is provided through the upper frontal armor plate with special hatches. For troopers equipped with individual seats that can be folded.
The prototypes machines were equipped with a diesel engine IVЕСО 8141.47 power of 125 HP and automatic transmission ZF.
On later models of car have a 4 cylinder turbo diesel IVECO 8052 TCA with a capacity of 180 HP at 3000 rpm When set to “Cougar” this engine uses an automatic transmission Renk Reco, providing five forward gear and one reverse gear.
From the automatic transmission through the torque Converter driving force is transferred to the transfer case, and from it through conventional driveline with equal angular velocities on the front and rear wheels. Each of the four wheels have independent torsion suspension with hydraulic shock absorbers. 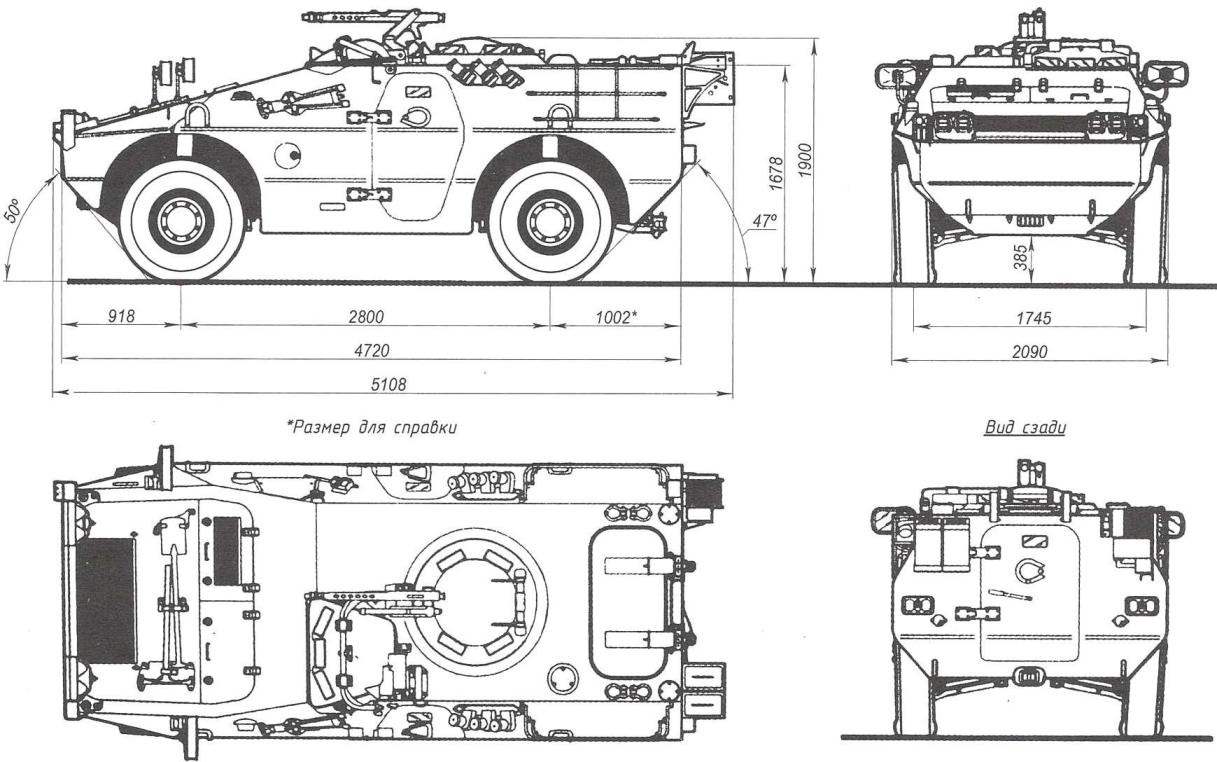 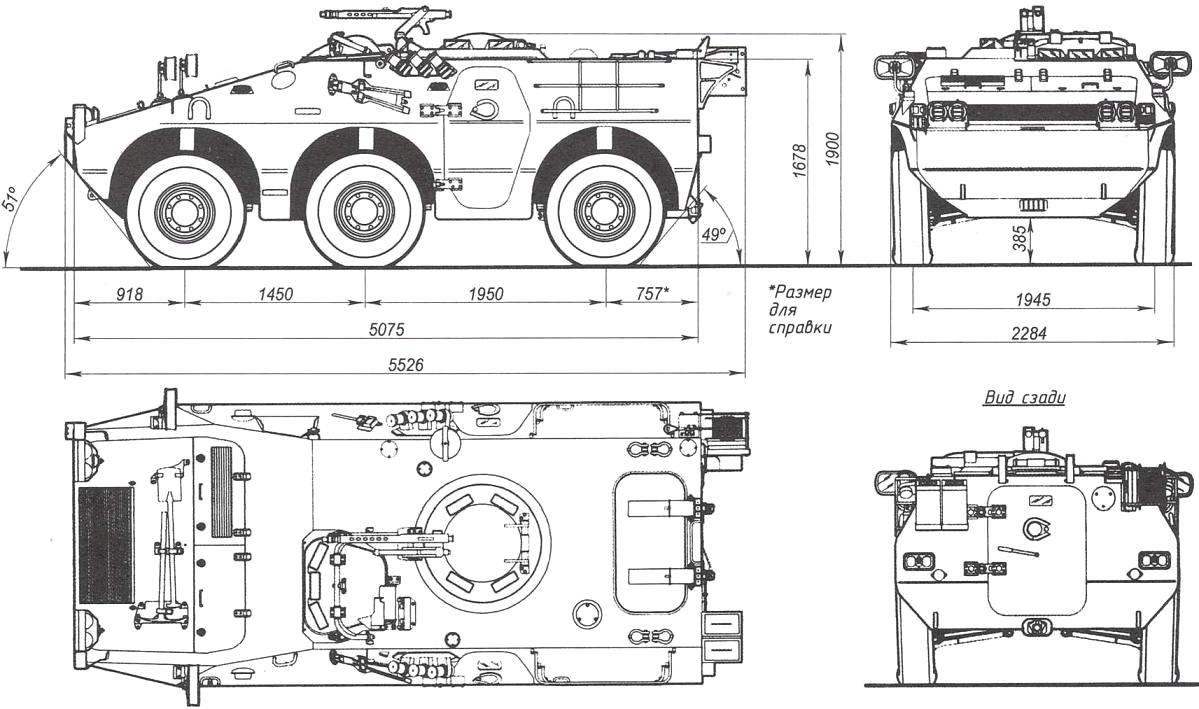 “Puma” 6×6
Turn of the front steered wheels is carried out using the power steering.
The air inlets for the engine air and the cooling radiators are located under the front part of the body. Windows for outlet of air and exhaust located on the right side of the body.
On both sides of the body is provided with doors opening forward. At the top of the doors installed bulletproof prismatic unit of observation, and below it is equipped loophole for firing individual weapons.
In the rear of the hull is a large door that opens to the left. It also has a prismatic supervision unit, and below a slit — firing. Right on the rear of the machine mounted winch.
In the center of the body located commander’s cupola with a hatch cover that opens to the rear. On the perimeter of the commander’s turret is equipped with five prism devices providing day circular observation. On the pursuit of the turret can be mounted 7.62-mm MG 42/59 machine gun or 12.7 mm М2НВ. The rear turret on the roof of the APC, there is another hatch cover that opens to the rear.
On both sides of the hull nearer the stern installed on the block of three smoke grenade launchers.
Standard equipment “Puma” includes system of protection against weapons of mass destruction, fire fighting and air-conditioning.
In addition to the usual APC assignment, “Puma” can be used as a reconnaissance vehicle, a base for self-propelled anti-tank complex TOW or Milan, the self-propelled anti-aircraft missile system Mistral, 81-mm self-propelled mortar as sanitary machine, radiation, and bacteriological reconnaissance. 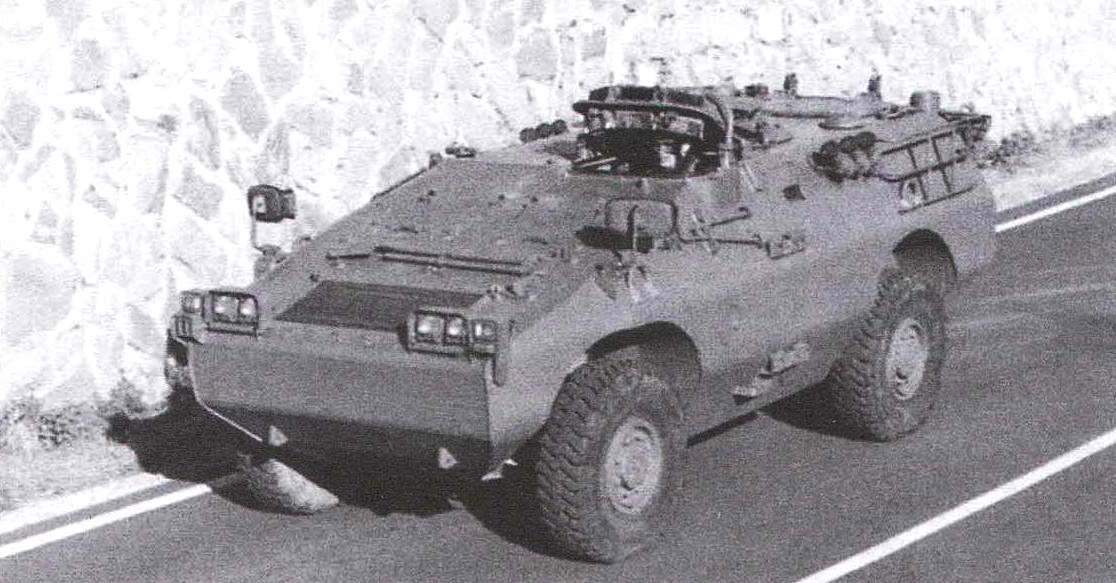 BTR “Puma” with the wheel formula 4×4

BTR “Puma” 6×6
At the end of 1990 was released the first prototype of the BTR “Puma” with the wheel formula 6×6. The APC version has a lot of interchangeable with armored personnel carriers “Puma” 4×4 systems and components, including the engine, transmission and suspension. In this embodiment, also proposed several specialized vehicles, including 81-mm mortar carrier and command.
A prototype of the BTR “Puma” 6×6 armed with a remote-controlled machine-gun with a 12.7 mm machine gun М2НВ and two blocks smoke grenade launchers at the three grenade launchers each mounted on both sides of the machine gun. This allows you to put the smoke screens in any direction by rotation installation. The machine can be installed a lot of other weapons systems, such as, for example, ATGM or rockets “land — air” type “Mistral”.
One of the experienced APC “Puma” 6×6 was equipped with a new remote-controlled installation with Otobreda 12.7 mm machine gun М2НВ providing firing the gunner under armor protection.
S. SUVOROV, candidate of military Sciences