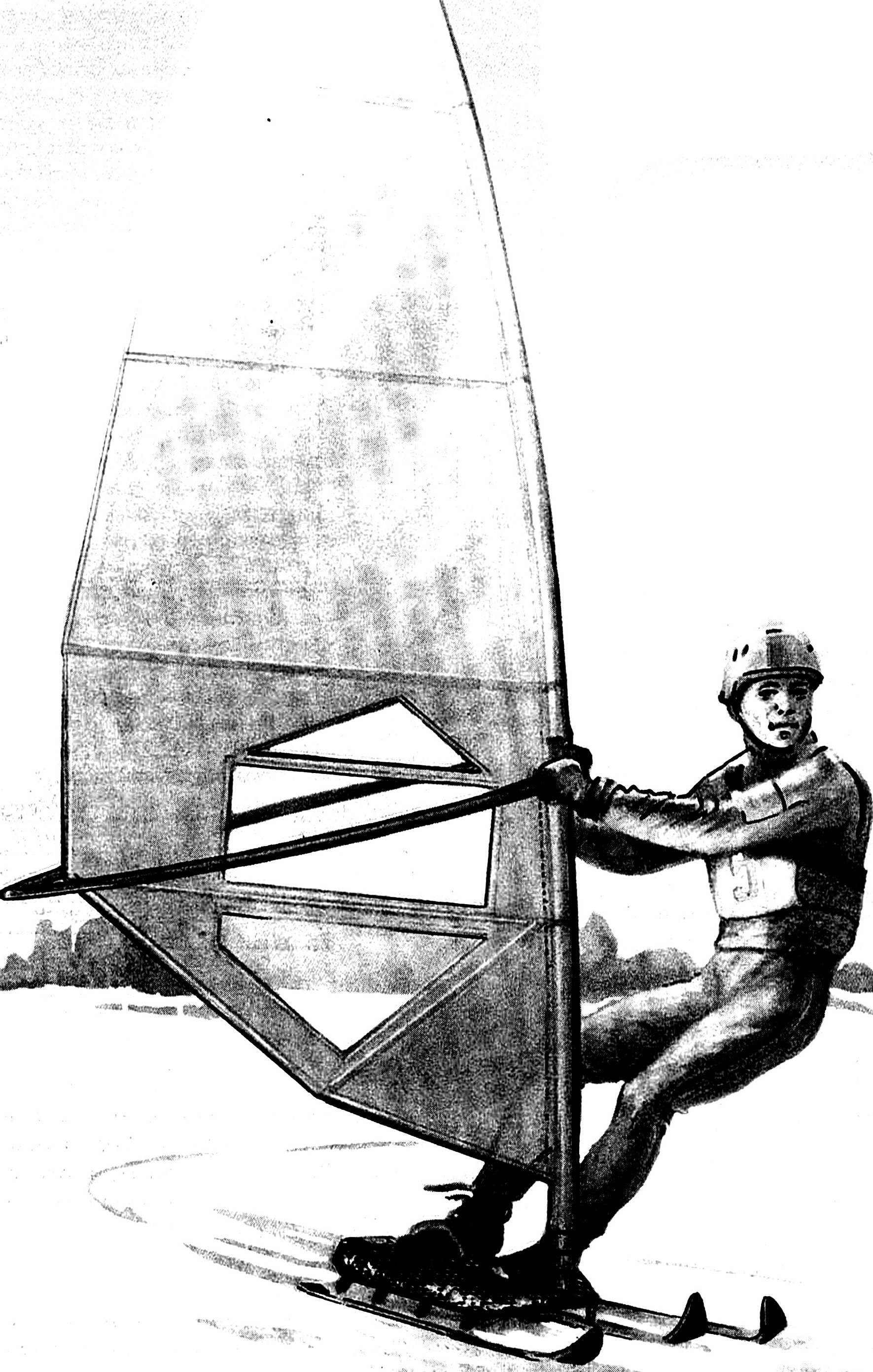 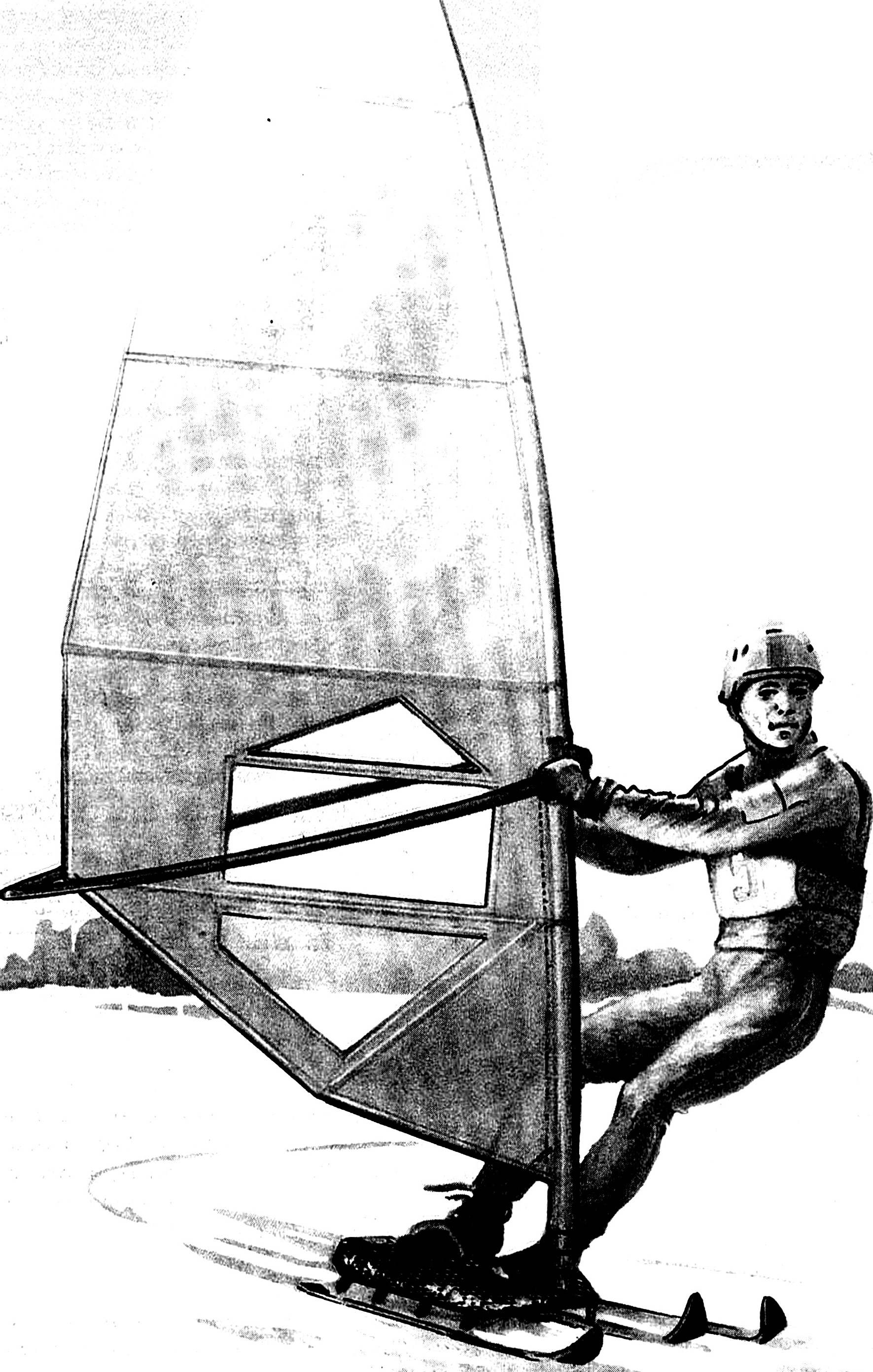 Our magazine has already talked about year-round windsurfer, is able with equal success to move on the water, snow and ice (see “M-K” № 11, 1987).
And not so long ago there were reports that such shells are used abroad and in the United States, in the state of new Hampshire, according to the magazine “Popular mechanics”, for several years held international competitions on winter Windsurfing. Among “ice” mini-sailboats, participating in competitions, meets a lot of interesting designs, technical solutions which may be used by enthusiasts of a new sport.
A kind of “mini-tri”-windsurfer, based on three skis, designed to travel and on ice and snow. Developed by Finnish athletes and called “WinterBoard” my scheme is very similar to the design, as described by our author N. Shershakov in the article “sailing all year round.” However, this shell somewhat smaller, and the side skis from the outer side, edged steel strips for increased stability when riding on ice. By the way, the skiing here applied the usual, cross-country, United with four metal crossbars that perform the role of springs. 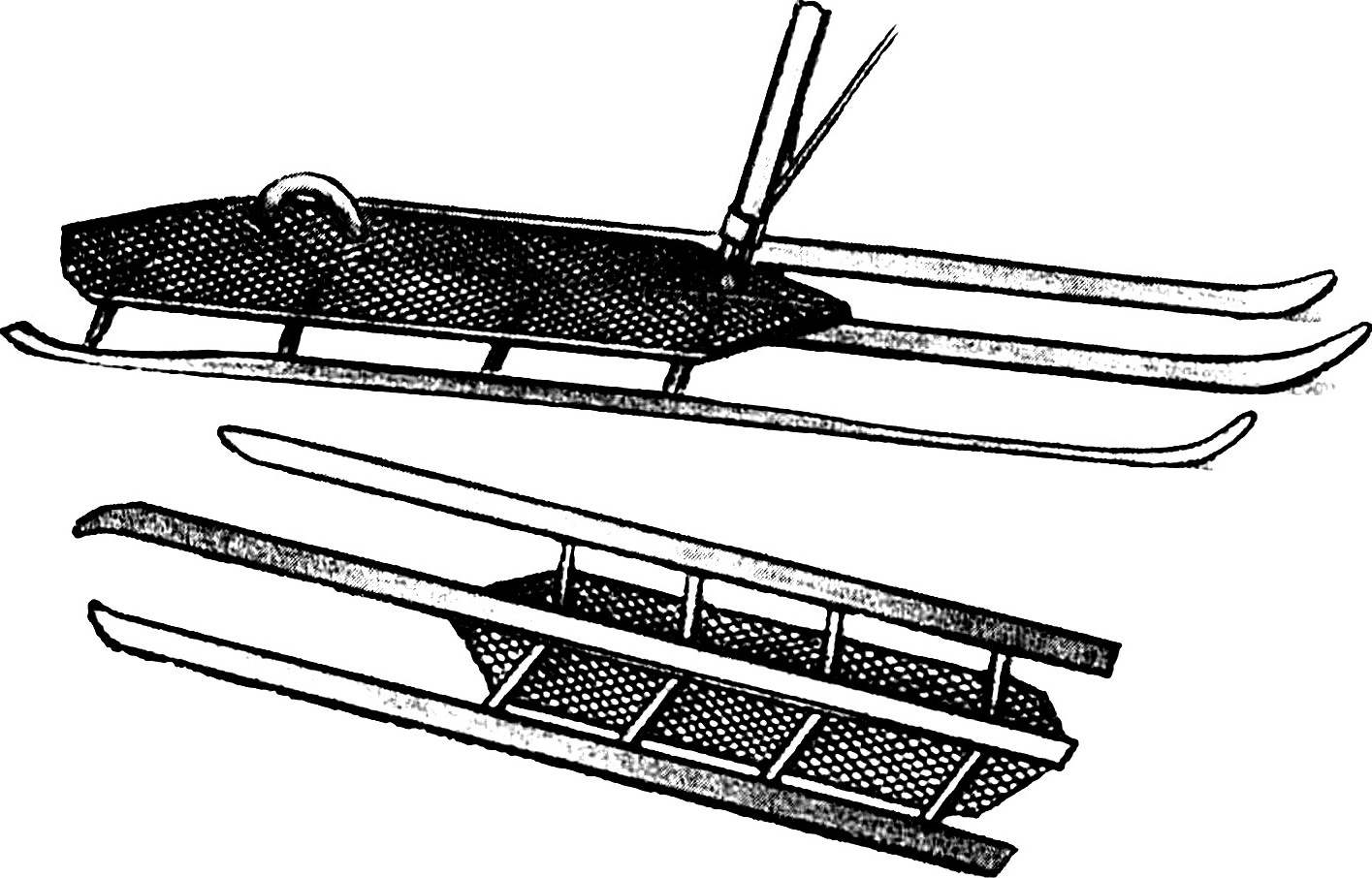 “WinterBoard”.
Another type of projectile — windsurfer-Buer — designed only for racing on the ice and is a pretty original design. First introduced in 1983, it has gained significant popularity and even got its own name — “Free skate”. By the way, one of the modifications of this surfer has reached the speed of 48 mph (77 km/h). 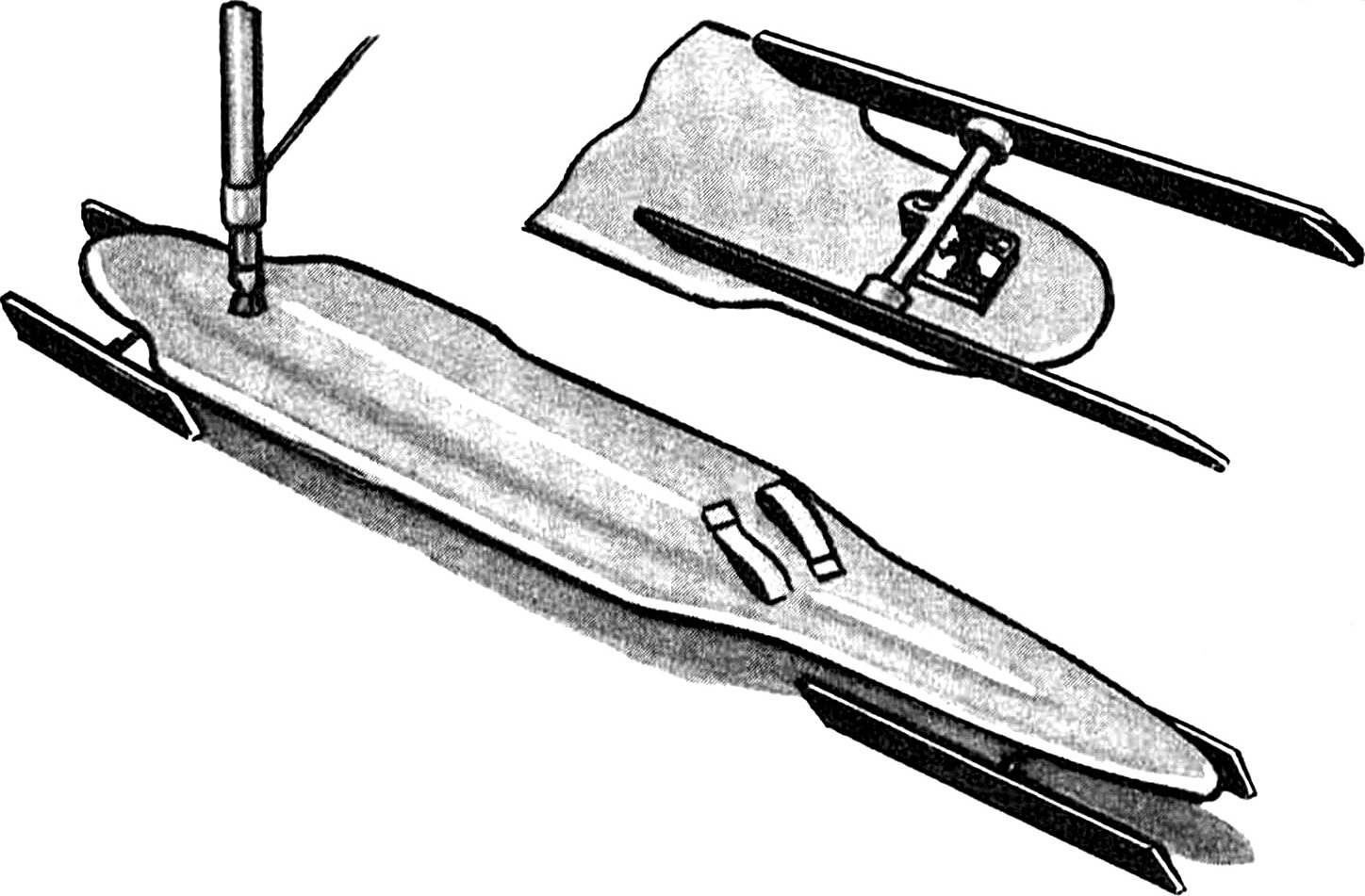 “Free skate”.
“Free skate” like a regular Board surfer from glass or carbon fiber. The front mounted universal joint for the mast, and the bottom ends of front and rear bridges, borrowed from skateboarding, but instead of the rollers include two pairs of steel runners with a length of 406 and a height of 50 mm each. Due to this suspension microbeer has an enviable maneuverability.
Using the basic idea behind the latest design, it is easy to make a simple ice windsurfer, more winter sailing skateboard. The base of the frame — longitudinal beam made of thick-walled dural tube Ø 40mm length 1,5 m (suitable longitudinal square or rectangular). Additional lateral longitudinal and transverse beams of the frame create a support for the deck sheet of plywood or fiberglass. To the main longitudinal beam on the brackets are attached to the hinges from the skateboard. (However, the latter is easy to make yourself — for example, the technology proposed in the “M-K” No. 4, 1979.) To this end, the bracket at an angle of 60° is welded to the steel segment tube, inner diameter which matches the diameter of the main beam. In the bracket are drilled the holes for the pivot — bolt M10. Below the swivel was more reliable in the holes you can weld it cut the tube. Pivot bracket bends from steel sheet of thickness 4 mm. In the Assembly between it and the bracket should be placed a rubber gasket with a thickness of 15-20 mm. 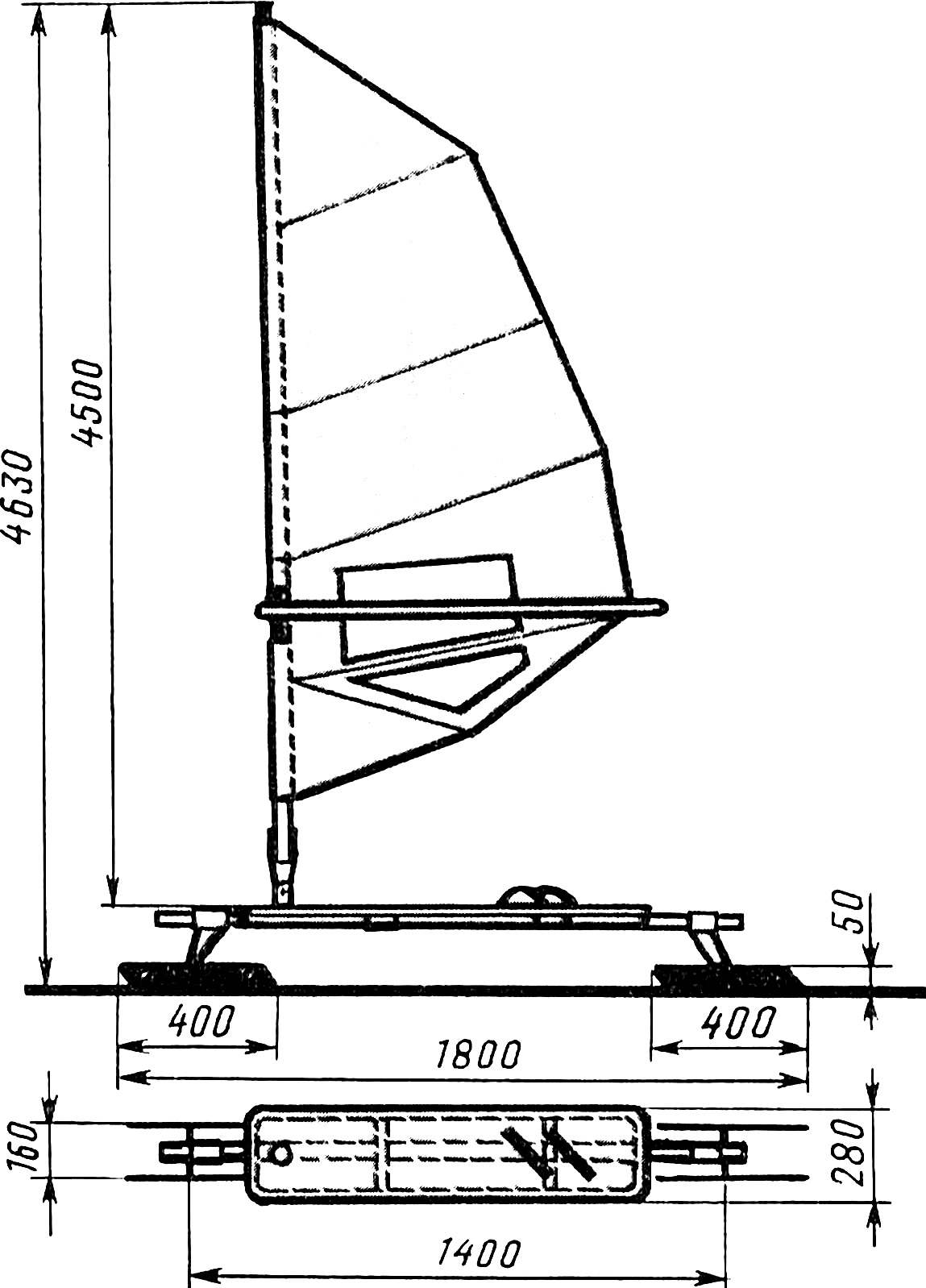 Ice windsurfer.
The rear pair of skates can be installed in the same way or just welded. In the latter case, the maneuverability of the rider in a slightly lower, but will increase stability on the course. 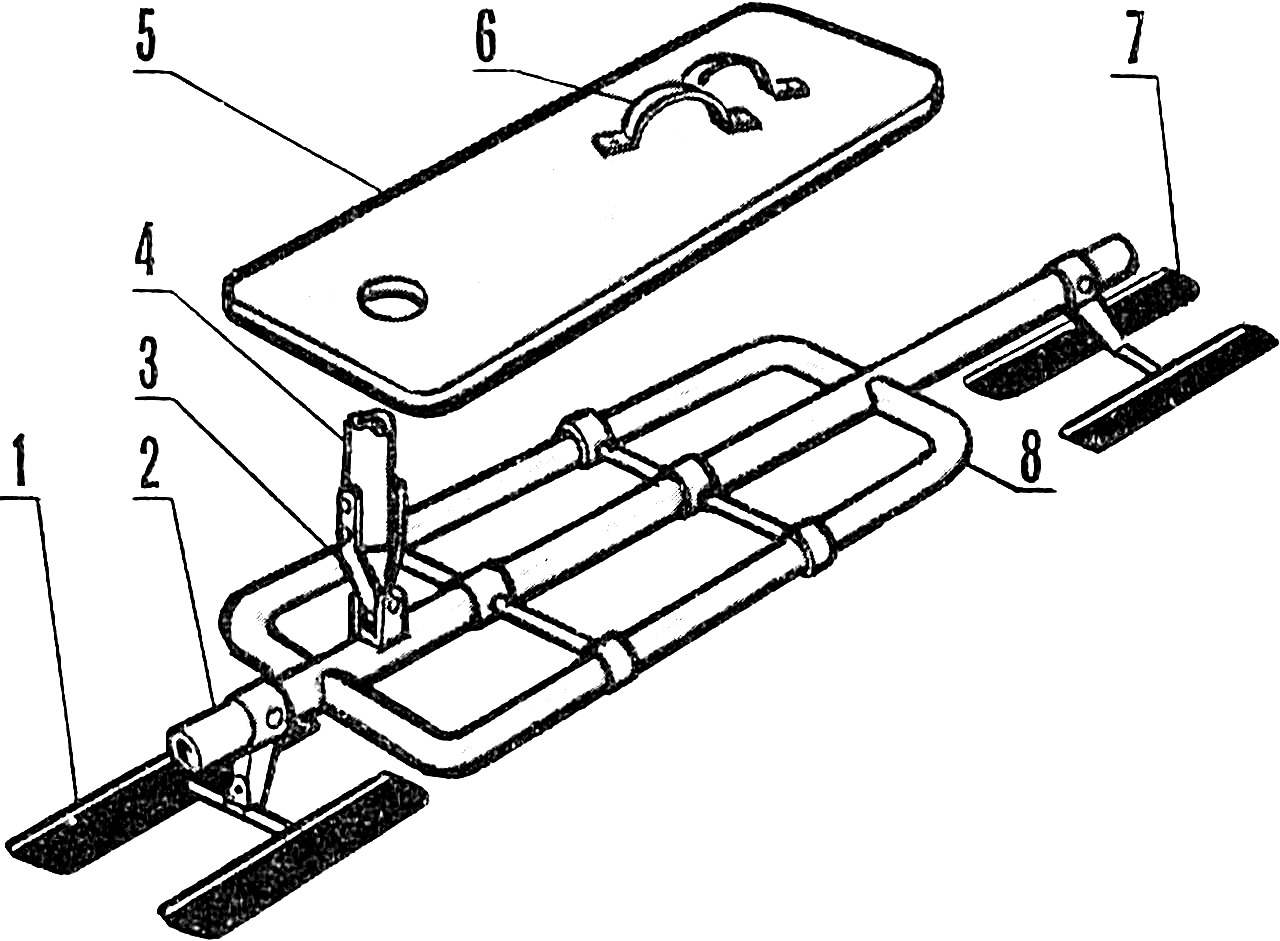 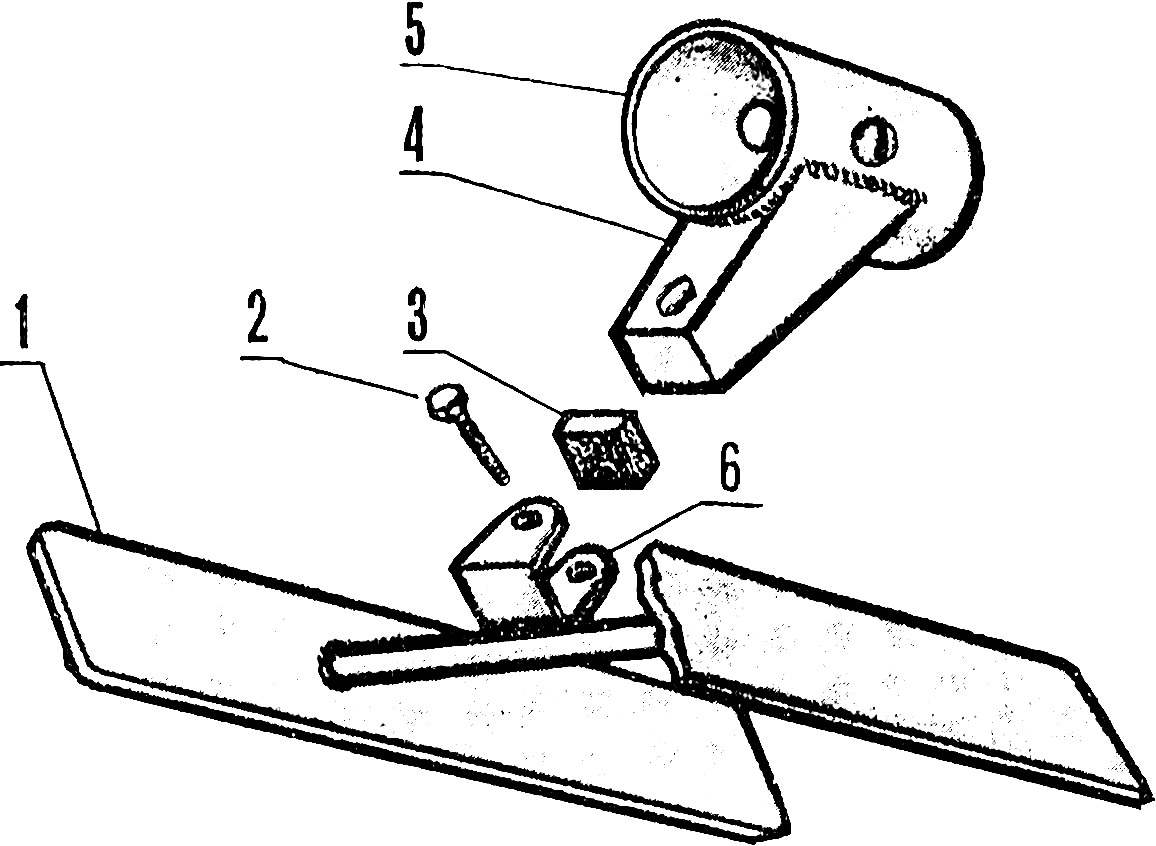