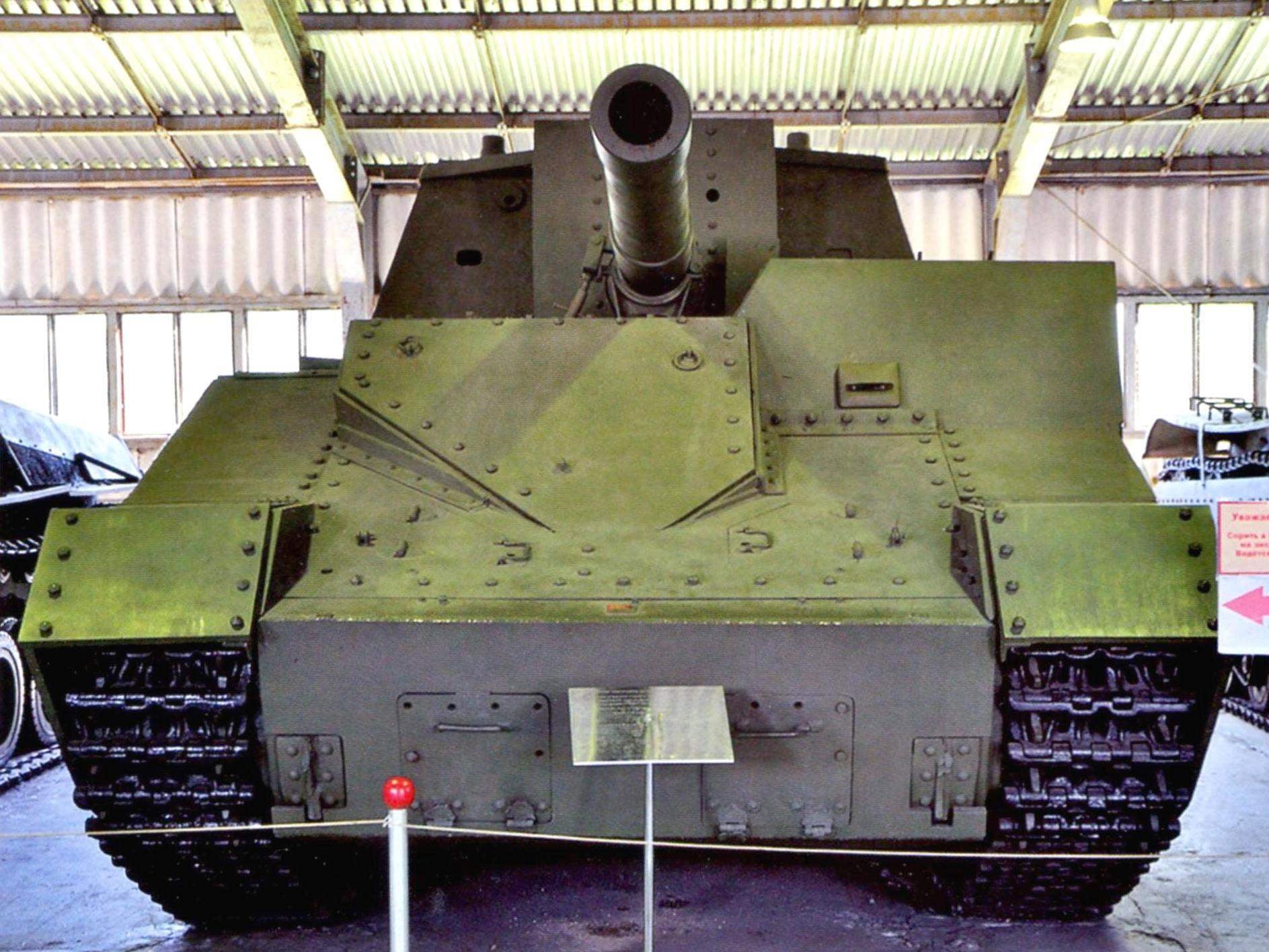 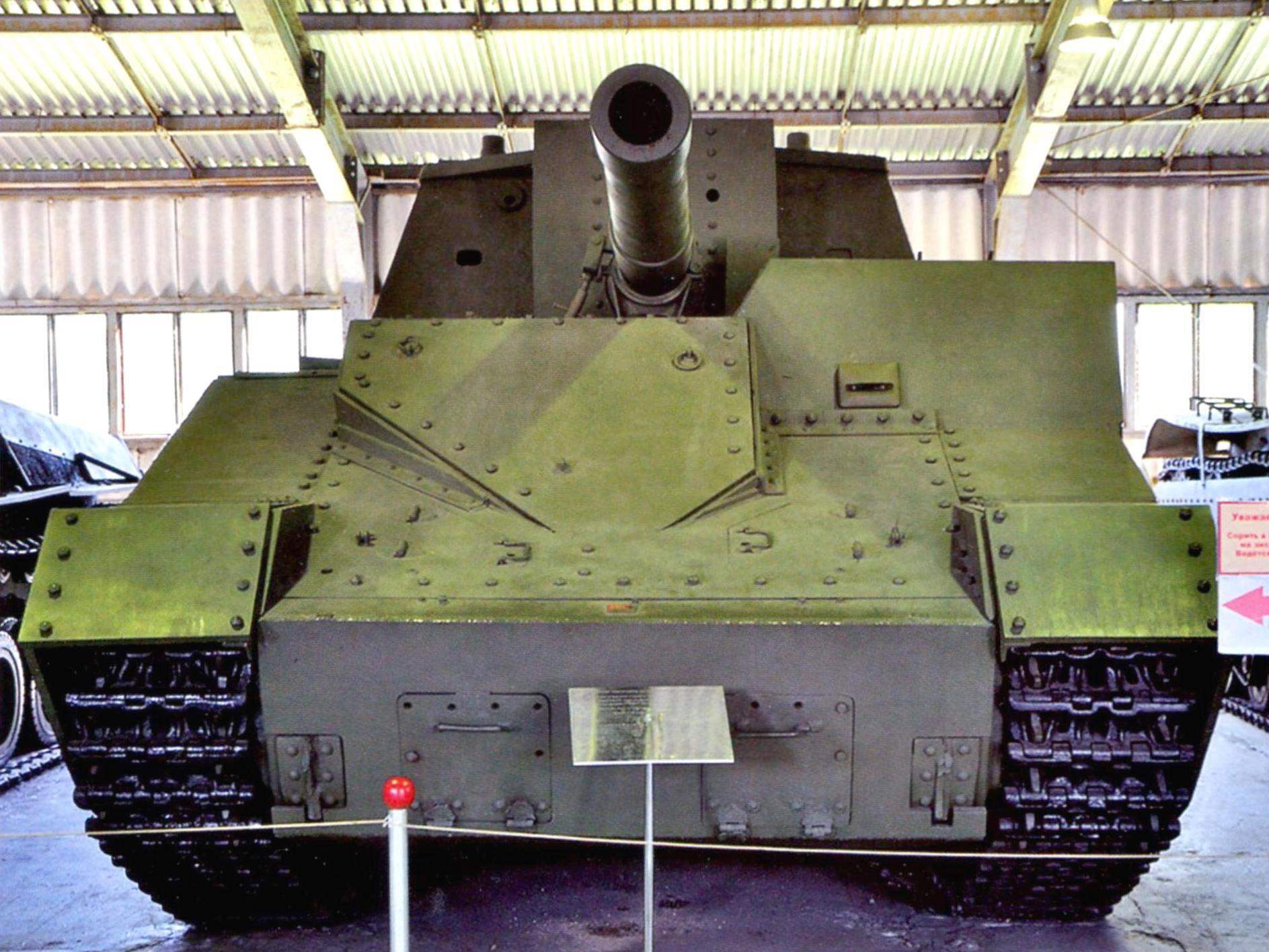 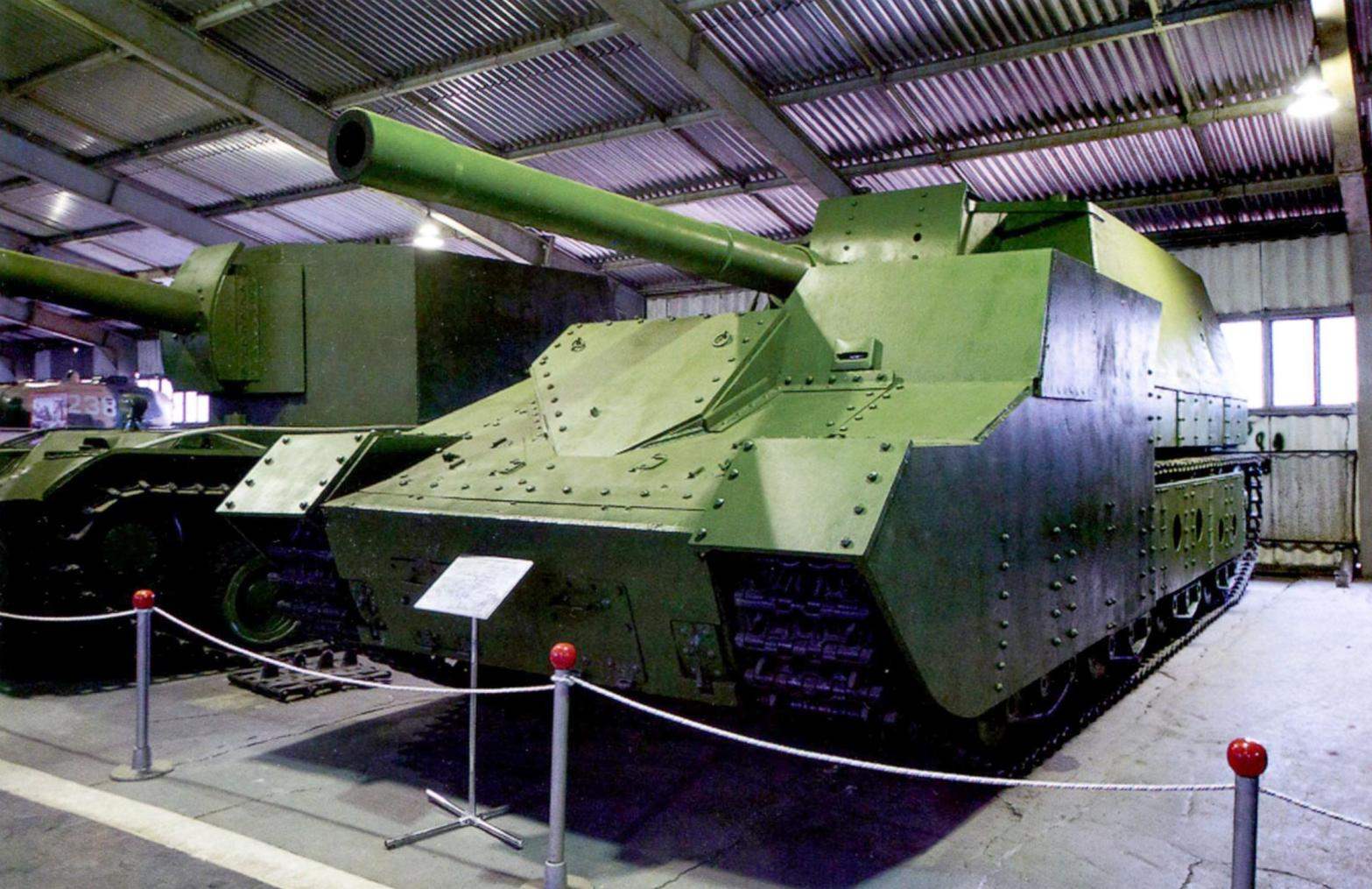 The beginning of the great Patriotic war, the worker-peasant Red army came no powerful self-propelled artillery installations (SAU), although the Finnish war showed the urgent need. The absence of such ACS in the ranks of divisions advancing on the positions of the “Mannerheim line”, in an extraordinary way hindered our attack. Particularly affected by difficulties with the suppression of long-term fortifications – these concrete structures, unassailable gun emplacements, often with multiple machine guns and even cannons. From the front to suppress such resistance was virtually impossible to destroy – only after a long artillery bombardment or air bombing. Needed were powerful tools of destruction. Then the military command remembered the self-propelled SU-14, created years earlier for the training program on “Heavy artillery of Special Purpose (TAON)” in the red army.

The program TAON were developed in the early 1930s and argued the application of large-caliber artillery systems: 305-mm mortars, 203-mm howitzers arr. 1929/31. and 152,4 mm gun of high power, mounted on a single mast. At that time, apparently, came to the necessity of creating unified models, in this case on the basis of placing multiple systems on a single mast. Quite justifiably considered that this approach should significantly reduce the cost and simplify the development, production and operation of the guns.
The development of systems entrusted to the Leningrad pilot plant Specialtist (later the Leningrad factory of experimental mechanical engineering No. 185 named after S. M. Kirov), which under the leadership of engineer P. Syachentov started designing self-propelled artillery. Combat tower on it was missing and the instrument should be placed directly in the housing. ACS received index su-14.
Designer P. Syachentov was already known in tank, for example, as the Creator of the most powerful in the world at that time 76.2-mm tank gun PS-3. It was adopted for the red army “for installation on medium, heavy tanks, and artillery tanks under the symbol “tank gun mod. 1933”. P. Syachentov one of the rare then order bearers – had a government award – the order of Lenin.
Under his leadership, experienced installation chassis was made in mid-may 1934, But by that time there was only one sample of the required program TAON guns – 203 mm howitzer B-4 mod. 1931, Two other sample – 305 mm howitzer Br-18 and a 152.4-mm gun of high power Br-2 will be manufactured only a few years. 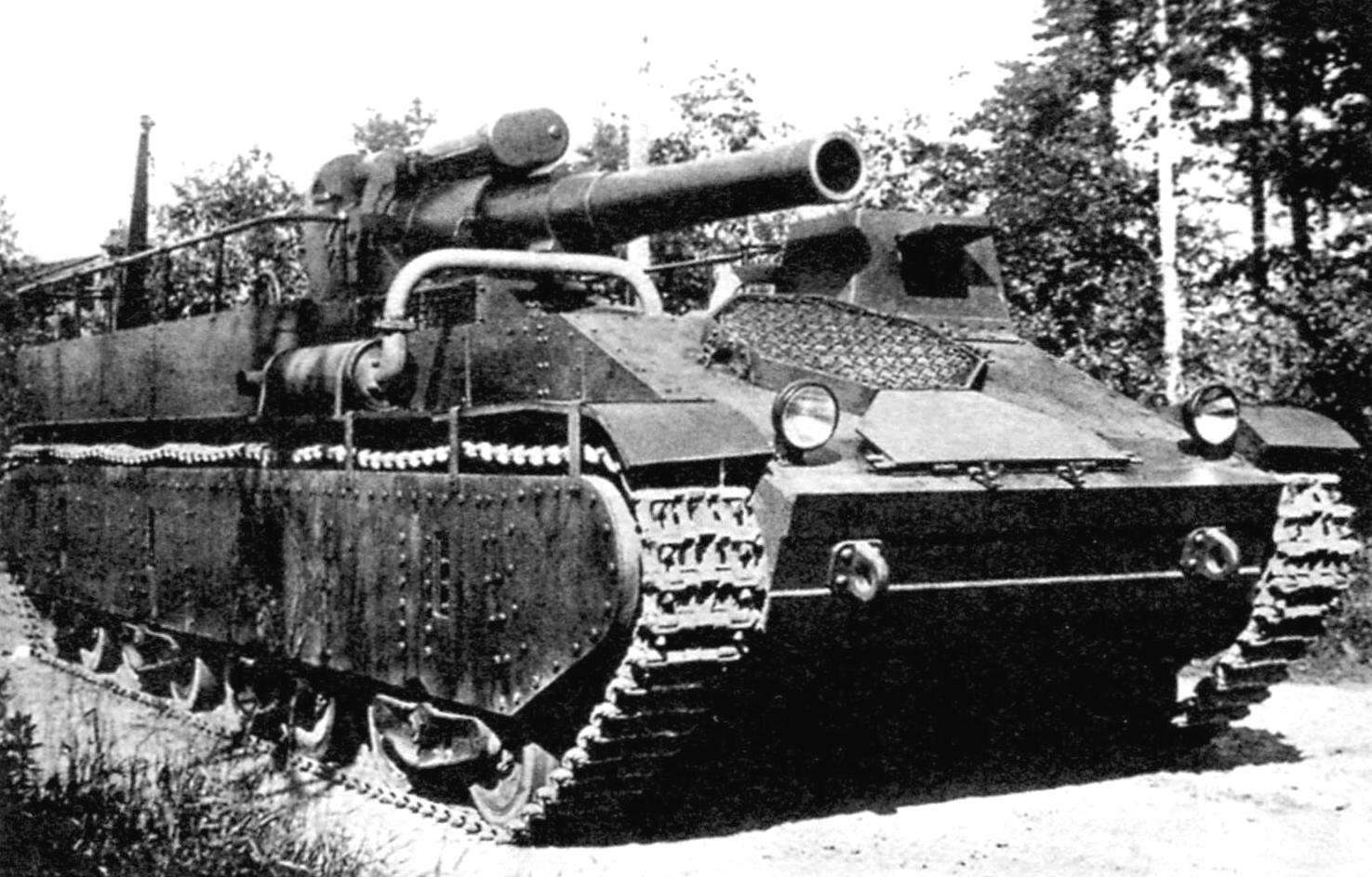 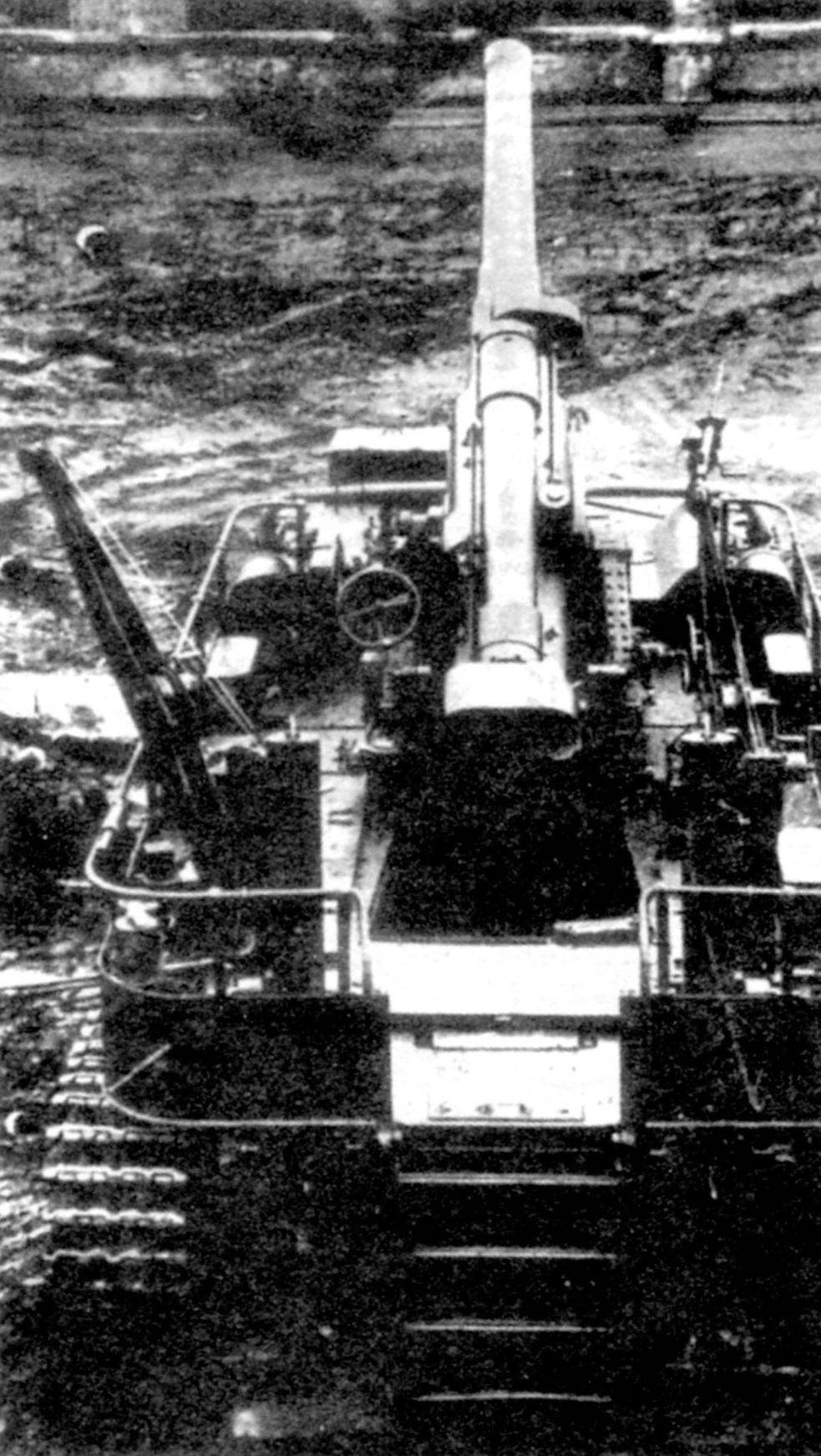 The frame of the device consists of armor plates with a thickness of 10-20 mm. Protective cabin is missing, the sides are only 10 mm armoured drop sides. Suspension is closed by steel screens
In chassis design as the chassis was adopted, the analogue of the heavy tank T-35A, at that time considered as well as experienced taken its nodes. There were eight reference rubber rollers and six support rollers with rubber tyres on each side; a driving wheel at the front and idler back with tension mechanism. They all had external depreciation. Suspension – wagon on two rollers, under-Sessoriana two spiral springs, fastened to the sides of the hull. When shooting for unloading it off a special mechanism.
Transmission set from T-28. It included the main clutch working on the principle of dry friction “steel on Ferodo”, two side multi-disc clutch with floating band brake, two side of the gearbox. Gearbox has put a five-speed with four forward speeds.
The casing of the unit had a complex box-like shape; it is made of rolled armor plates, connected by welding and rivets with thickness of 10-20 mm. the Bow of the hull unchanged borrowed also the T-35. Machine protection was performed bulletproof, instead of cutting open platform only had a 10-mm raised sides of the chassis were covered with screens of the same thickness. The office was in front, followed by combat and then motorostroitelnoe – aft.
The crew consisted of seven people: the commander, three loader, gunner, driver-mechanic and his assistant. The driver of the car was in the front part of it, and the rest on removable benches in the rear.
Howitzer B-4 was installed in the middle of the hull. Top machine, lifting and turning mechanisms have not undergone any alterations. For ease of loading shots were served on Board by two cranes located on the sides, with a lifting capacity of 200 kg. Ammunition consisted of eight rounds, which should have been carried under the floor of the platform.
Shooting could be conducted at the stops, and the body had to draw on the ground with two openers, lowered from the stern, providing the stability of the whole installation. The openers had the cylinders and controlled by manual or an electric actuator. 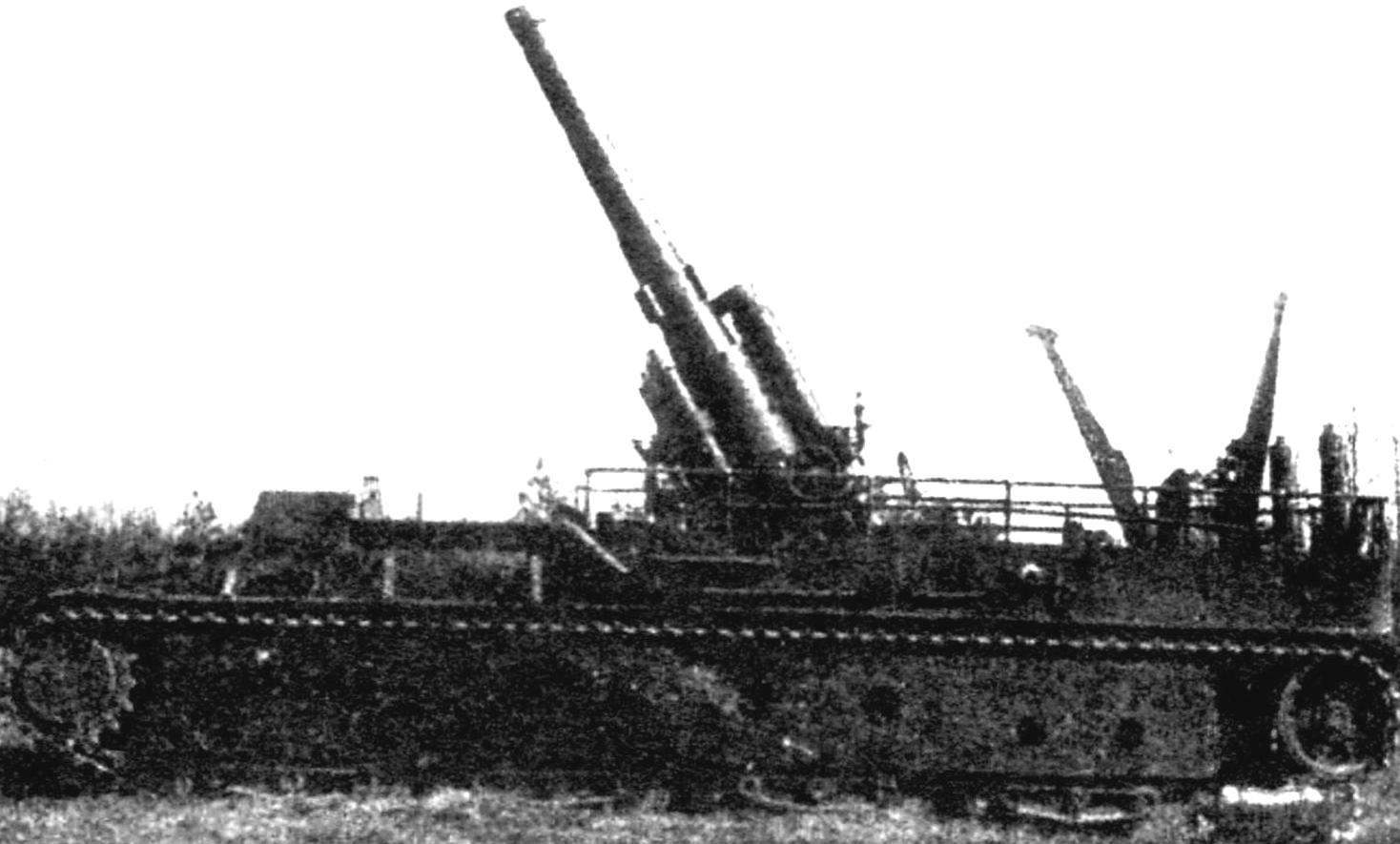 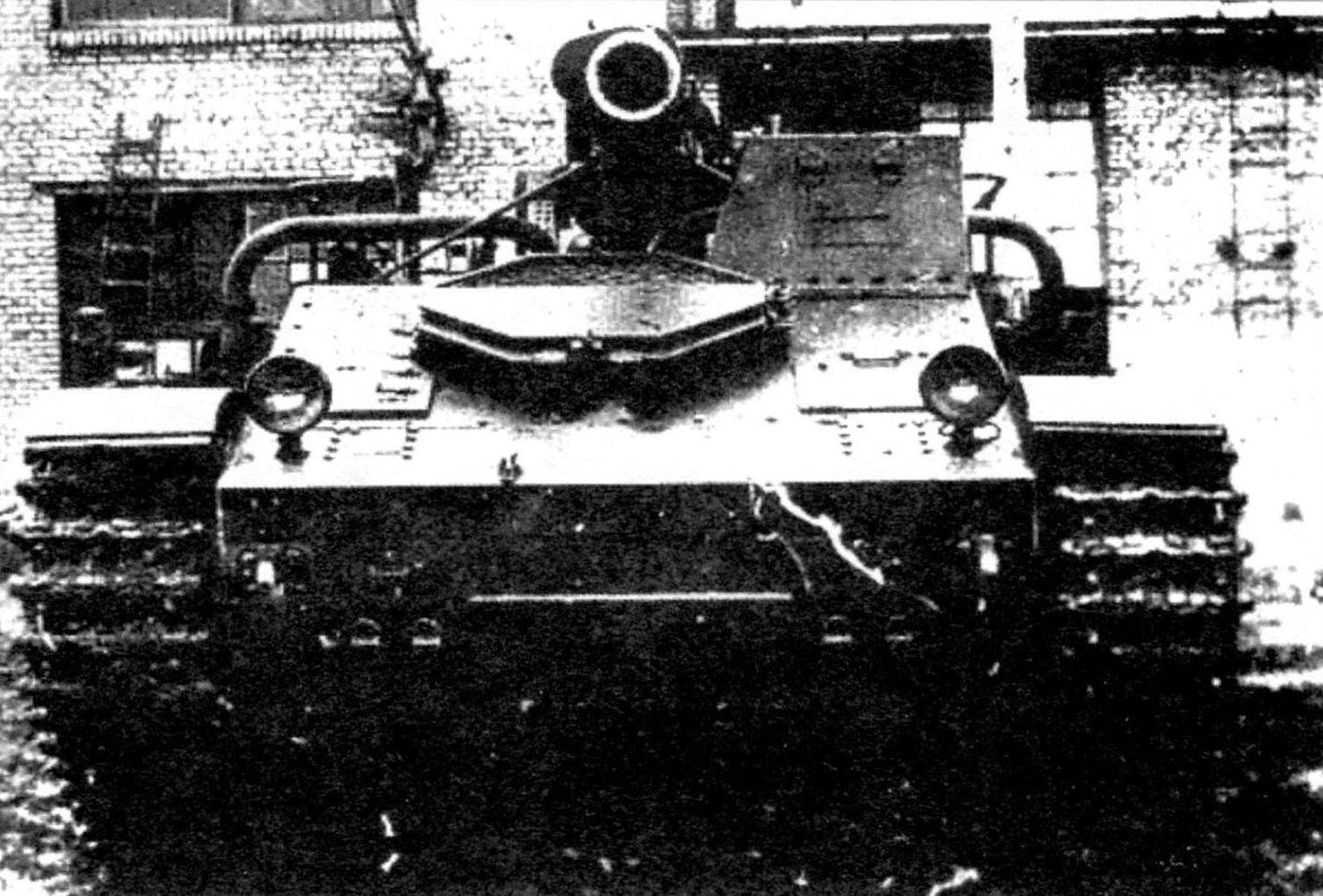 The bow of the hull su-14 is borrowed from a heavy tank T-35. On the left side on the upper sheet – driver’s hatch and observation tower 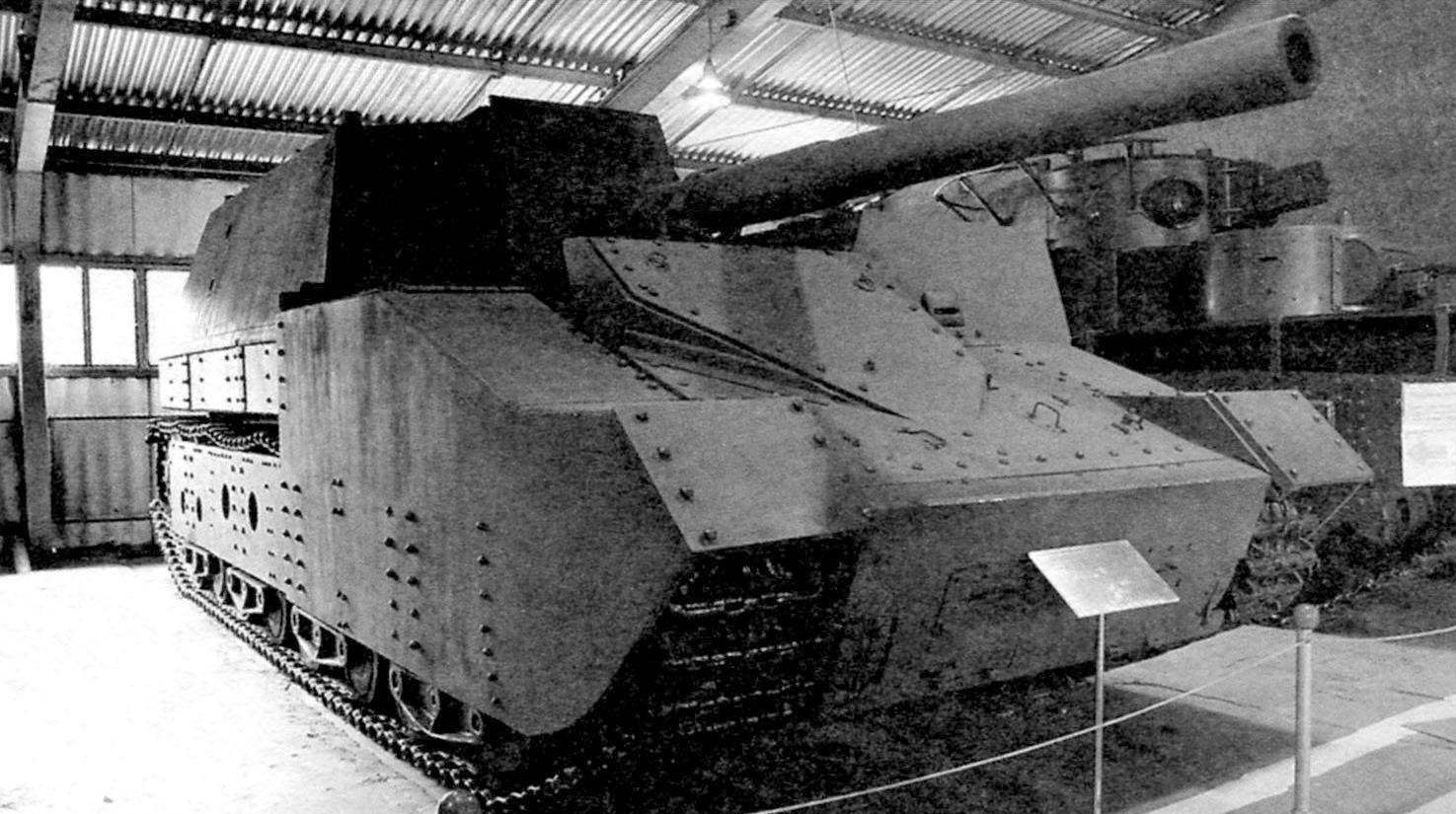 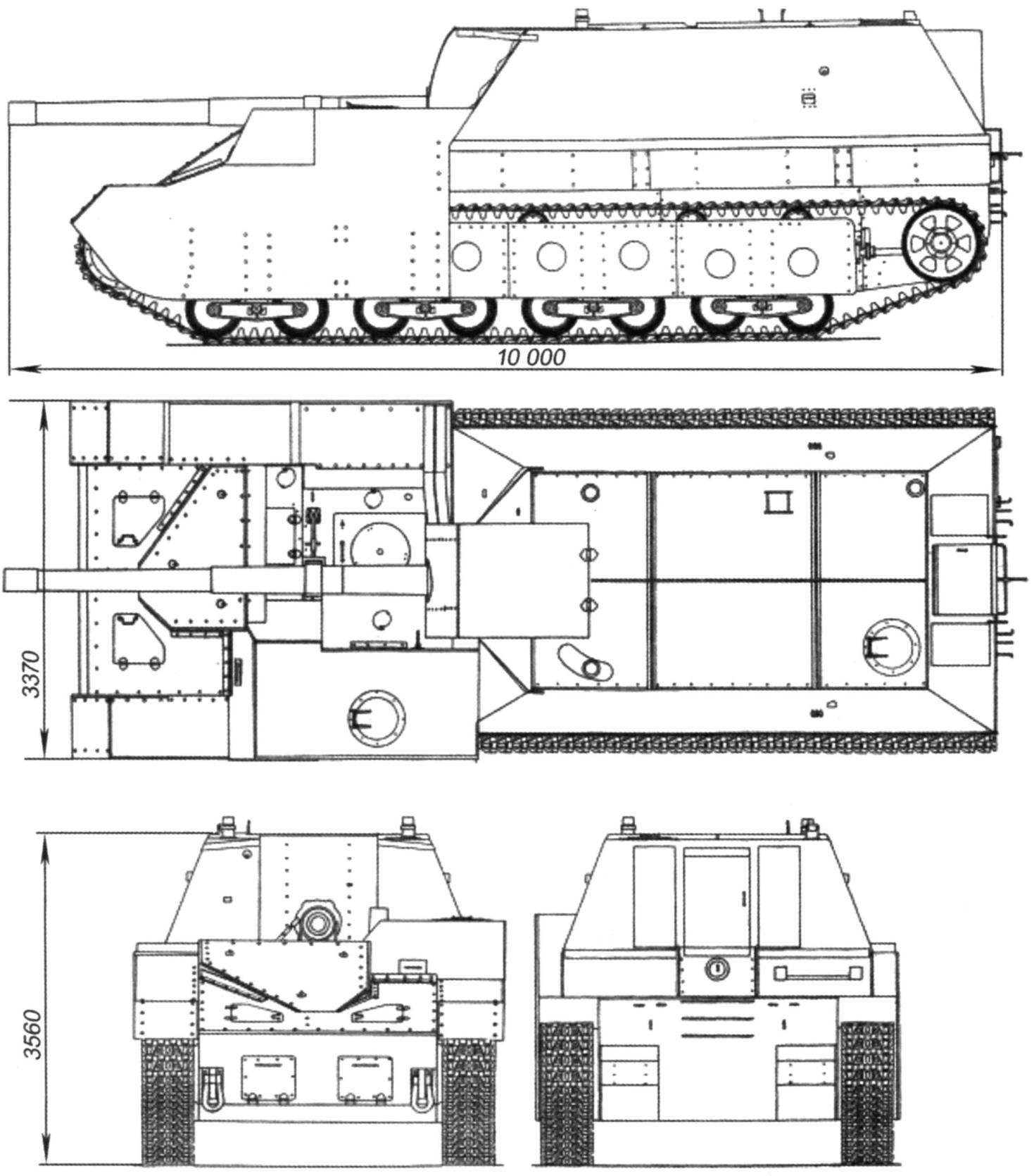 SU-14Бр-2 with an armored cabin

SU-14Бр-2. View from the stern
SU-14 with the howitzer was a very heavy car. Its mass amounted to more than 47,5 T. For comparison, we note that the mass batibasaga T-35 mod. 1936 amounted to 50 tons, tank T-34 mod. 1940, reaches up to 32 t, and T-28 and even less – only 25.4 T.
To ensure the installation of adequate mobility, had to put the same engine on the T-35 – a converted airplane 12-cylinder, four-stroke V-shaped gasoline M-17T, liquid-cooled 500 HP With 860 liters of fuel in the tanks the unit had a power reserve of more than 100 – 120 km.
In addition to the guns B-4, SU-14 was armed with three 7.62 mm DT machine guns, one of them could be used as anti-aircraft; in the front of the case had anti-aircraft turret. Ammunition for machine guns was estimated 2268 mi cartridges, charged in 36 disks.
The first sample of 203-mm howitzer B-4 was made in 1931, and its serial production began only in the next. A weapon of this caliber on a plan of military experts was to be used for “the destruction of especially strong structures of the enemy of reinforced concrete and steel armor, as well as to destroy targets far from the front line”.
The heavy carriage of the howitzer had a crawler; so she had a good permeability. However, on the March chose to remove the barrel from the gun carriage and transported both parts on two wagons, crawler tractors.
Designers easily set the gun on the platform of the SU-14 in her own carriage.
B-4, with a barrel length of 25 cal., could hit targets at a distance of 18 km. Her ammunition consisted of rounds of separate loading bag with a full and eleven different variable charges from 15 kg of gunpowder to 3.24 kg.
Shots were fired concrete-piercing shells G-620 and high-explosive f-625 with a mass of about 100 kg. the Initial velocity of the concrete was 607 m/s, the explosive was changed from 280 to also 607 m/s, depending on the charge distance to the target.
Such was the design of the experimental SU-14, which possessed powerful weapons.
In late July 1934, the installation brought Rzhevsky research artillery range (NIAP) near Leningrad for firing and sea trials. It turned out that in the shots she was rocking so hard, to stay on the platform was only possible, holding on to the handrails. Too low was the rate for cranes, winches, clearly not adapted for lifting heavy shells to the gun.
Test run also revealed a number of significant drawbacks. Especially the impact engine overheating and noise in the transmission.
After a long maintenance at the plant, strengthening of the chassis units, modernization of cooling system of the engine installation in the autumn of the same year moved back to the landfill to continue testing. Re-shooting at different angles guidance vertical and horizontal. Again the long run.
In this case the acceptance Commission drew up a big list of flaws, both technical and constructive, and decided not to recommend the SU-14 for adopting.
At the end of January 1935, the military leadership sent to the pilot plant a new task that requires to spend now major upgrades of the SU-14 on the chassis, engine, transmission. And while another runs the installation showed a good performance, again revealed a number of shortcomings. Then the designers of the plant, using the accumulated experience and tests, created another reference installation. They used the transmission and the main clutch now from tank T-35A, improved transmission, steering clutches, brakes, moved forward the drive wheels. The word “overextended” all suspension. Also, mounted the engine M-17F with a capacity of 680 HP, which allowed increasing the machine speed to 31 km/h.
Upgraded so the new variant renamed SU-14-1, but with the same with a 203-mm gun B-4, summer and autumn of 1936 again took all kinds of tests.
At the same time on the Stalingrad plant “Barricades” (to 1923 – the Tsaritsynsky cannon factory) worked on debugging of prototypes long 152,4 mm gun Br-2. She later became widely known as “a 152.4-mm gun mod. 1937”. The trunk of her with piston shutter was mounted on a tracked gun carriage. Barrel length was equal to 7170 mm, or 41.2 klb. The ammunition consisted of rounds of separate loading bag. Shots were fired shells weighing about 50 kg, had a muzzle velocity of 880 m/s – high-explosive 53-OF and concrete-piercing 53-G Range at that time was very important, about 26 km away.
At the end of 1936, one of the experienced Br-2 was moved to Leningrad and immediately began upgrading the SU-14-1 on a new barrel. Tests conducted in the spring of the following year, gave very encouraging results in terms of the plant in 1937, has approved the issue of five units installation series called SU-14Бр-2, and in 1938 was going to go to mass production, taking the machine into service. It was also foreseen the design of the plant SU-14Бр-5 280-mm mortars; it was to replace the 305-mm Br-18, as previously required by the program TAON.
However, the nation was faced with the tragic events of 1937 – 1938 They did not pass the factory Specialtist. New year’s eve 31 December 1936, the main designer of installations P. Syachentov was arrested and accused of sabotage, spying and undermining state industry. 5 may next year, the court sentenced him to “the Supreme penalty”. The sentence was executed the next day.
Nothing to say about the fact that self-propelled SU-14, SU-14-1, SU-14Бр-2, and the projected SU-Br-5 suffered the same fate. Their “shot” along with his designer. The red army troops received in any of them.
TECHNICAL CHARACTERISTICS OF THE GUNS PROJECT SU-14 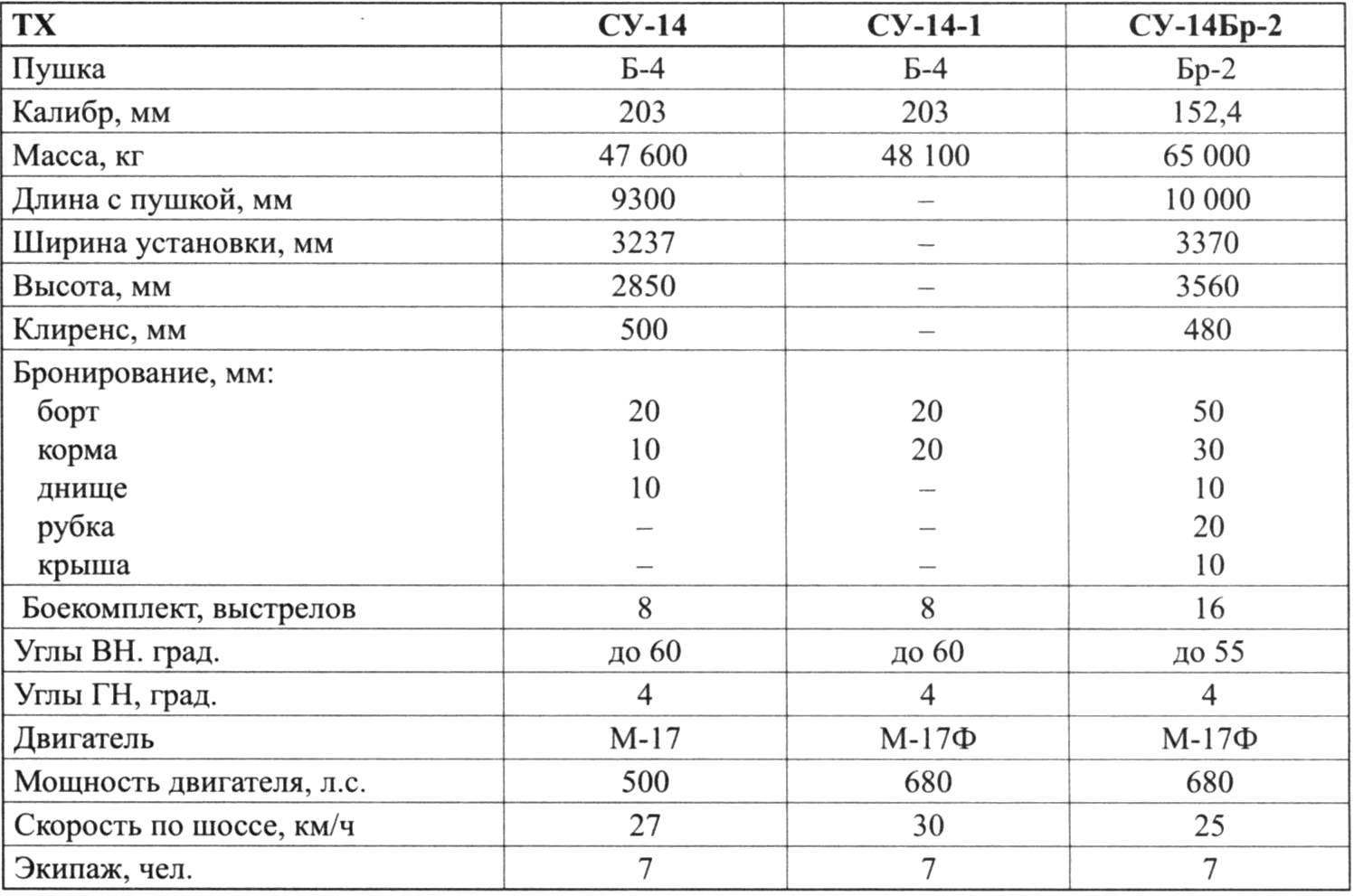 This could and finish the presentation of the projects one of the most perspective and demanded in the army of machines.
BUT if not.. mentioned in the beginning of the article. BUT… it happened a few years Finnish war, requesting a powerful self-propelled guns. November 17, 1940 issued a decree of the defence Committee of the USSR, according to which the Factory No. 185 named. S. M. Kirov was ordered “to be repaired and shielded armor plates two units of SU-14”, add standing all these years on conservation.
The decision held, however, required armor, yzhotavlyvaly at the Izhora plant, is late in arrival. Only in March, on machines he built the wheelhouse of the armor plates with thickness 30 – 50 mm, closed guns. Mass is unexpectedly increased to 65 tons.
The required screening finished in the end of the month – the war to that time was completed. In September 1940, both cars passed in situated near Moscow in Kubinka NIIBT.
But (again BUT…) su-14 has again taken when the enemy came to the capital in 1941, the Installation is included in the composition of Individual heavy division special purpose and together with the SU-100 was advanced to the station Kubinka for firing from concealed positions. Data about opening their fire on the enemy was not found.
V. TALANOV