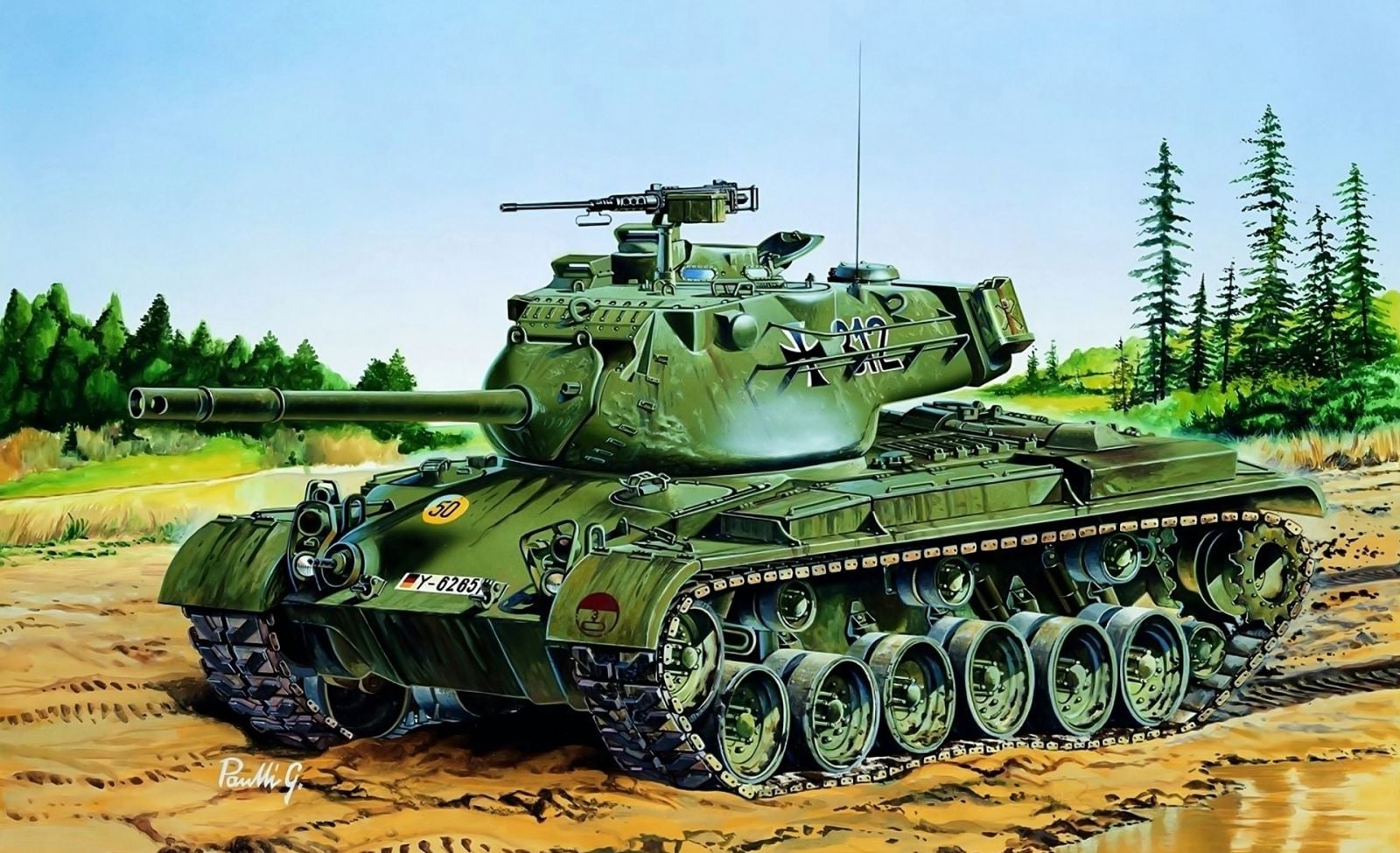 After the Second world war, the US army would be without promising medium tank. “Sherman” has exhausted almost all possibilities of modernization, and M26 “Pershing” was created as a heavy tank, although it was later redesignated as the medium, so, in fact, was not mainly due to low specific power.

To take the role of main tank of the US army “Pershing” prevented and that different equipment — remotemachine, pontoon and the other was designed for the car class “Sherman”, which had a mass of about 30-35 tons. For replacement of this equipment needed large costs, and after the war the aviation lobby in the US tried to prove that the tanks as the weapons were obsolete and required to send all funds for the development of new aircraft.
Therefore, prior to 1948, managed to hold only the modernization of the M26, which consisted mainly in the installation of more powerful engine.
However, the strong backlog of the Soviet Union forced the Americans to adopt in 1949 a new program of tank. It provided for the establishment of the T41 light tank, medium and heavy Т42 Т43. As the first without any problems and went into production of the M41 “Walker Bulldog” (more about him in the journal “modelist-Konstruktor” No. 9’2000), however, he turned out to be pretty useless as the light tanks have passed. The second Т43 — some problems was launched into a series and after the upgrade was the last American heavy tank M103.
Third — Т42 — was a most interesting tank of the trio. Weight 36 t he had quite little body on Pyatikhatki chassis. In it, the Americans finally decided to take out the gunner sitting beside the driver, which by that time was already an anachronism. In the case of adoption Т42 into service the us army would have received a full medium tank, something inferior and something superior to the Soviet T-54, and postwar American tank would have gone the other way. But it so happened that Т42 never was adopted.
Twenty-fifth day of June 1950 started the Korean war. The neglect of the development of tanks in the United States made itself felt immediately. Under the blows of the North Korean T-34-85 American part broke all records of the drape. And then although with the buildup of forces and redeployment in Korea M26 and its M46 upgraded version of the situation was stabilized, joyful little, because the fight had not with the new Soviet tanks. In the case of appearance on the battlefield the T-54 the situation is the summer of 1950 could be repeated.
The result was feverish modernization of the armored forces of the United States. Was finally allocated the necessary funds, but attempts to bring it to serial production Т42 not successful — new chassis needed some work. Therefore, it was decided to put the tower on Т42 M46 — born M47 “Patton II”. However, it also took a while to change as the M46 hull and turret Т42, and the Korean war M47 is already missed. Medium tank M47:
1 — 90-mm gun; 2 — 12.7-mm anti-aircraft machine gun Browning М2НВ; 3 — fan cover; 4 — drawer for equipment; 5 — mount cans; 6 — exhaust pipe; 7 — driving wheel; 8 — a tension roller 9 track roller; 10 — guide wheel; 11 — 7.62 mm Browning machine gun course М1919А4; 12 — Luke’s gunner; 13 — the eyepieces of the stereoscopic rangefinder; 14 — gunner; 15 — hatch commander’s; 16 — antenna inputs; 17 — bracket gun in its stowed position; 18 — a box with a phone number of infantry with tank crew and the socket connection to the telephone line; 19 — blinds cover MTO; 20 — driver’s hatch
The cast turret of the M47 had a streamlined shape, clearly inspired by the designs of the towers of Soviet tanks, though, and had aft the niche that housed the ammo rack of the first stage of the 11 rounds. The convenience of charging Americans prefer the lessons of wartime experience showing that when you hit a tower this often ammo rack detonates.
In the turret of the M47 was mounted 90-mm gun M36, which had, depending on the modification of the T-shaped, cylindrical, or the same as the M46, muzzle brake. The fire of the guns had the gunner and the commander, who had his sight (in Т42 the commander had no sight). In addition to the periscope, a gunner had a stereoscopic rangefinder, mounted similarly to the tower experienced German tank “Panther” Ausf.F. The commander and gunner were placed on the right side of the turret and the loader on the left. In the tower Т42 he had the hatch to eject spent cartridges, but it eliminated M47 — sharedetails came in first place.
The shape of the tower M47 was a step forward compared to the M46, but the Americans overdid it, trying to reduce its internal volume, which placed the commander’s cupola and loader hatch in the ledges of the tower. The result is a concavity, perfectly catching the shells. This error is corrected already on the M48, making the tower on the model of the Soviet T-54 fully convex.
The M47 hull is also different from the M46. Its frontal part has become more streamlined, between the seats of the driver and the gunner disappeared the fan cover. But to eliminate the gunner and have affected the frontal sheet machine-gun Americans once again decided not to.
Suspension was similar to M47 M46 (only the number of carriers was reduced to three on Board). Created for the M26, with a front roller connected complex mechanism with sloth and moreover, had sent forward the balancer, and a special tensioning roller (the Americans were very afraid of jump-out tracks) between the last roller and the sprocket, this chassis has become the main obstacle to increase speed. Despite the increased engine power, maximum speed of the tank is not increased (though average for the area and increased). The transition to diesel engine have American tanks too long, and M47 had the same 810-horsepower gasoline air-cooled engine, and the M46. 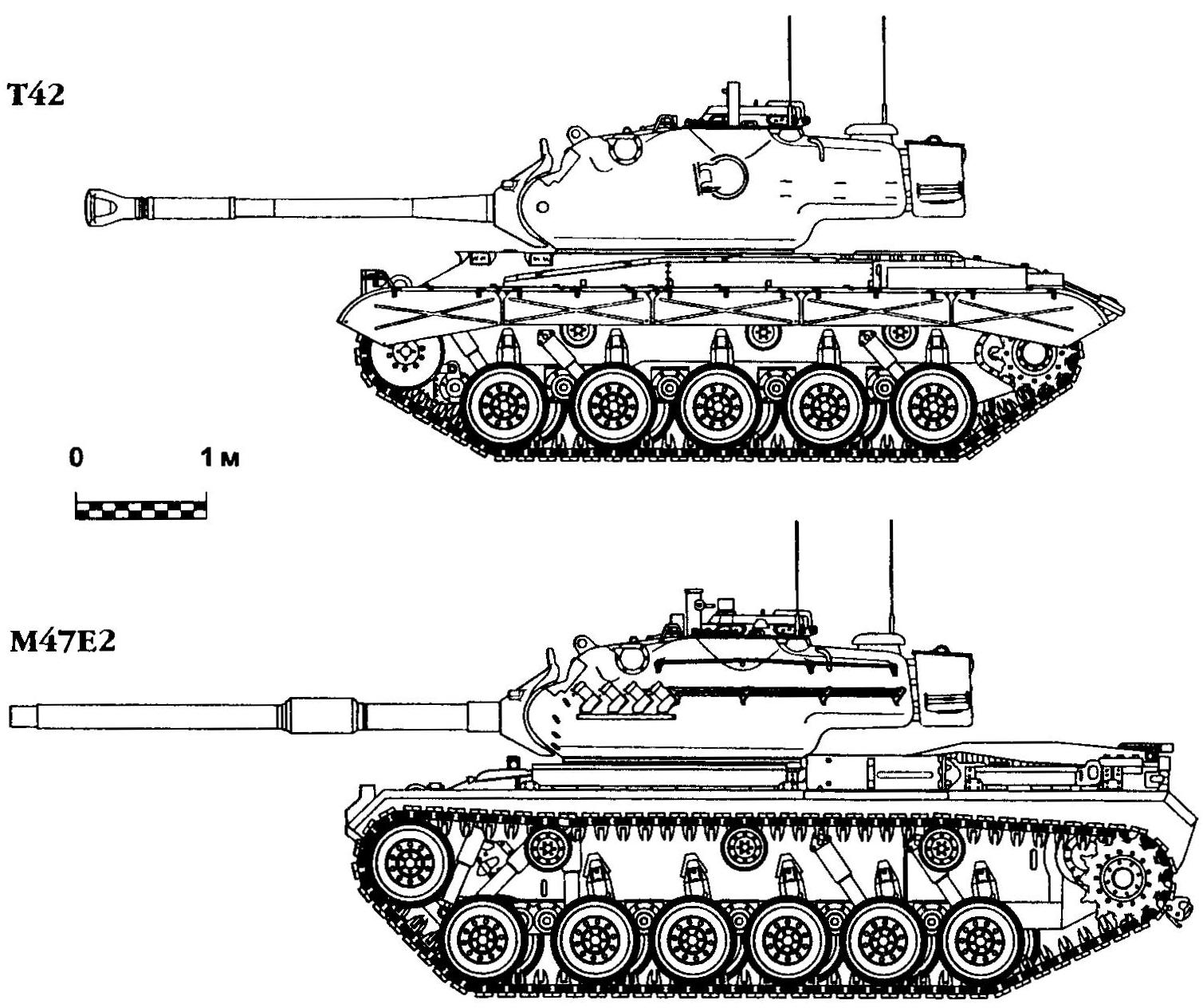 The result is M47 tank not become standard in American tank, he entered the U.S. army in very limited numbers (only two divisions in West Germany) and was quickly replaced by the M48. However, it is actively delivered to the armies of NATO countries and other U.S.-dependent regimes, so the total production amounted to 8676 units.
Tanks M47 entered service with the armies of France, Germany, Italy, Spain, Austria, Portugal and other European countries. Received M47 and South Korea with Taiwan. In the future, replacing them in their armies more sophisticated machines (like your development, and the U.S.), those countries have sold or transferred M47 less developed countries. So he went to Turkey, Iran, Pakistan.
Attempted upgrade of the M47, but without much success. The French put the gun from the AMX-30, Italian — English 105-mm gun L7, and the Austrians — diesel of its own design. All these cars left in the category prototypes, as the upgrade does not especially increases the combat value of the tank, but greatly increases its cost.
In addition, by design, the M47 is not very suitable for upgrades. Its chassis, developed during the Second world war, it was not designed for high speed and all of his reserves were still used in M46, so when you install a more powerful engine was required to change suspension. To increase the protection, too, was not possible due to the complex shape of the tower, creating problems during the screening. And due to the presence of the tower of the concavities is impossible to put a dynamic protection, as they are located in areas of concave containers with explosives would be demolished neighbouring containers. 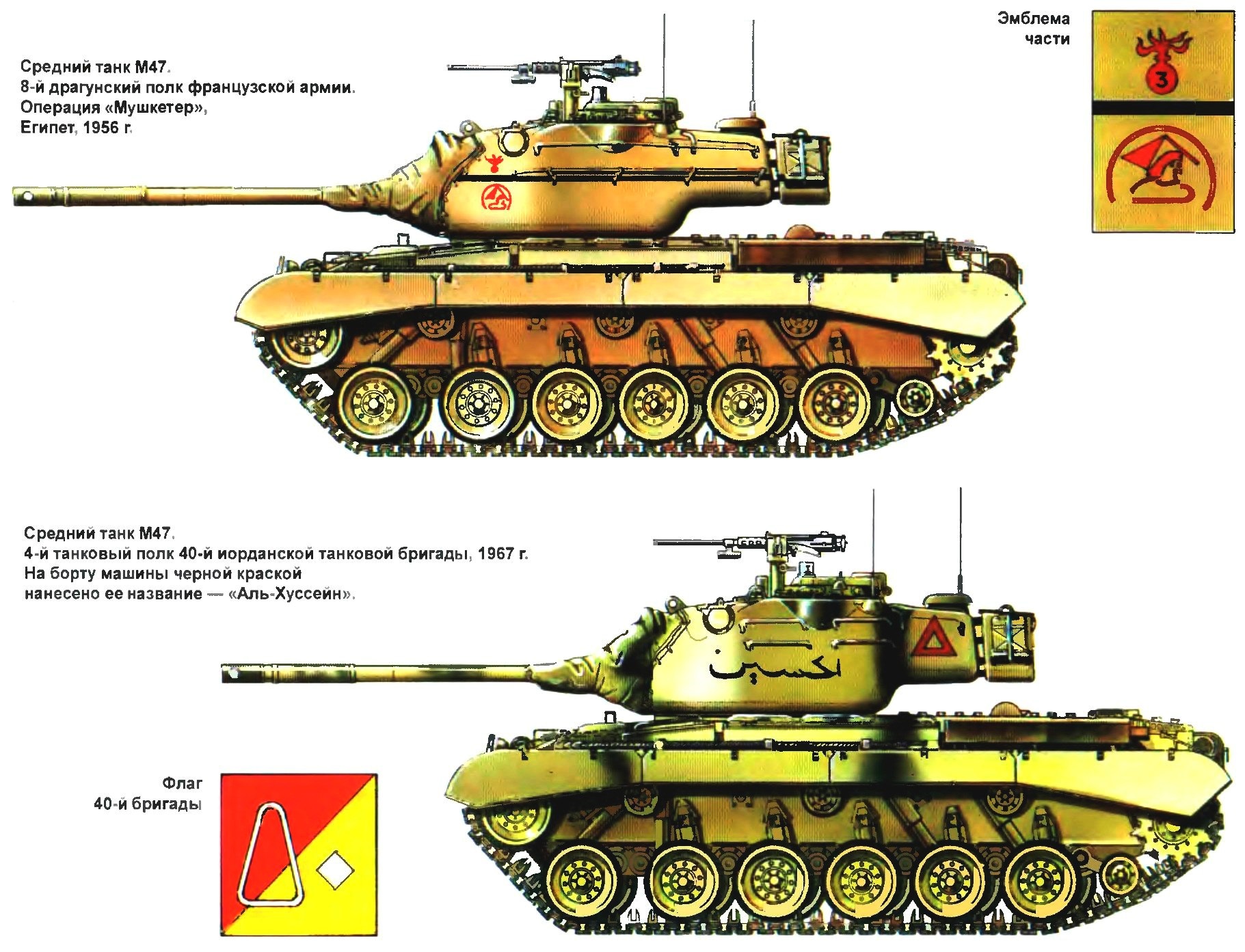 Therefore, a serious modernization programs M47 were only two, both with the help of the us, Spain and Iran. Spain firm Talbot with American campaigns of Chrysler in the 1970-ies carried out the modernization of tanks M47 to the level М47Е1 and М47Е2.
The alteration in М47Е1 M47 engine and transmission were replaced with new U.S. — made. New engine — diesel AVDS-1790-2A — along with upgraded suspension (been replaced the shocks and removed the tension pulley) made it possible to reach the speed of 54 km/h to 48 before the upgrade. In the case eliminated the machine gunner, due to which the ammunition has risen to 77 shells. The driver appeared passive night vision device. On the tower installed four smoke grenade launchers, a coaxial gun Browning machine gun was replaced by MG42. We also installed a new fire control system.
When upgrading to the level М47Е2 in the tower was mounted German gun Rh-105 with ammunition in 42 of the projectile. All in all, the option was converted М47Е1 330 tanks and a 46 — in option М47Е2. Armor protection remained the same.
The performance characteristics of the tanks 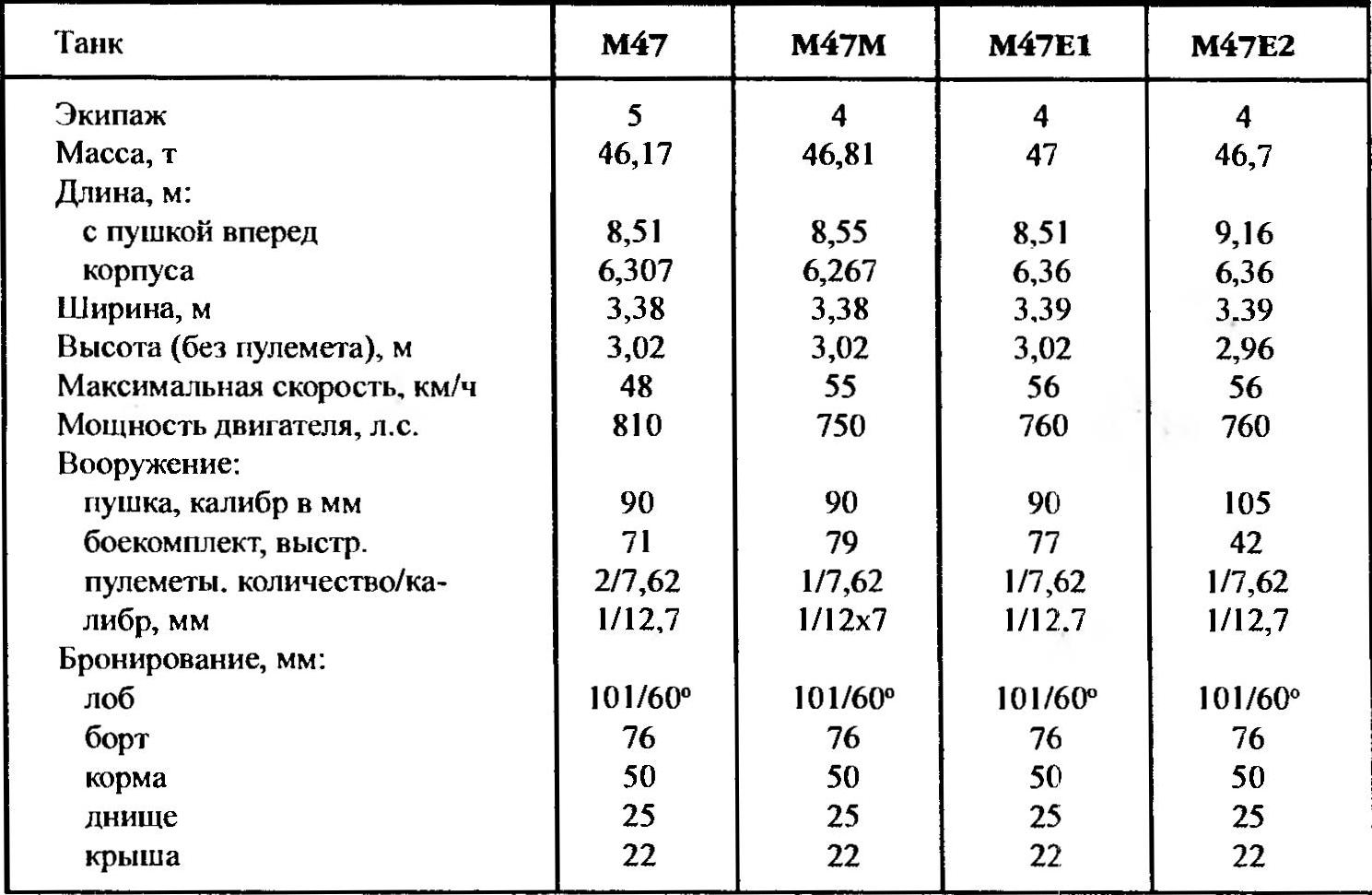 In Iran for modernisation of tanks M47 variant М47М in 1972 by the American firm of Bowen-McLaughlim-York plant was built. Prototyping was carried out in the United States. The tank was fitted with a fire control system from the M60A1, engine, transmission, and the roof of the body and feed interchangeable with М48АЗ and M60A1. Was practically replaced all of the instrument filling the case. Eliminated the machine gunner, which increased gun ammunition 77 rounds.
Undercarriage removed the tensioner pulley, changed the driving wheel, installed the shock absorbers from the M60 and a new caterpillar. It is possible to increase the speed to 55 km/h and range of up to 600 km. Until 1975 it was upgraded 400 Iranian tanks and 147 tanks of Pakistan.
But no amount of modernization could no longer extend the life of this war machine. In those countries where it still remained in service at the beginning of 1990-ies, it began to withdraw into reserve to alter vehicle launched bridges, engineering machines and the like. Only Portugal, Iran and Pakistan still retain in service a number of tanks of this type.
In Austria M47 buried in the tower, use on the border as bunkers. It is interesting to note that in 1960-e years in the Austrian M47 military service future “terminator” actor Arnold Schwarzenegger. Recently the tank “terminator” was found, and restored as a Museum piece brought to the United States. In General, M47 in museums is not uncommon, although this tank is not particularly famous, but regularly served in the armies of many countries.
V. MALGINOV