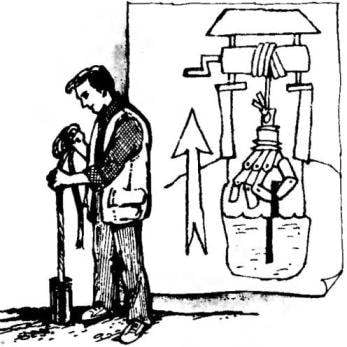 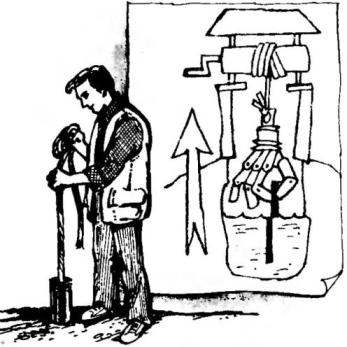 The journal “modelist-Konstruktor” discharged since 1980, so are his longtime admirer. Could not write to the editorial Board decided for the first time. At school are addicted to design and manufacture any devices, mechanisms, tools. Sometimes fails to come up and do something then suddenly see the magazine and think: what you haven’t shared with others? Therefore, I write.

Somehow in his garden plot I missed in the downhole well of a long pole. Then was wondering how to get it. But while the water came to decisive action on my part is not reached. But this summer because of the drought really decreased the water level in the well and the pole was in the way. And then it had to pomeshivat. The result was a device to remove it.
First of all, I found a section of pipe with a diameter smaller than the bore (inner diameter of the latter — 159 mm, and the outer from a section of a pipe — 115 mm). The gap between their walls was sufficient for fixing fingers of a rope, and just for free movement when climbing.
At the lower end of the pipe preform made six cuts with a length of 60 mm; the resulting “petals” unbent up to diameter 140 mm — it has a kind of skirt. In the body of the pipe cut three slits the size of 30×8 mm at the same distance from each other. Outside welded axle, which previously put on the lugs of the hooks (from the electrode 5 mm diameter) with a sharp and slightly curved ends. At the top of the pipe I drilled four holes the diameter of a rope, the ends of which are tied up to a height of half a meter. To a rope attached to the rope and lowered the device into the well. 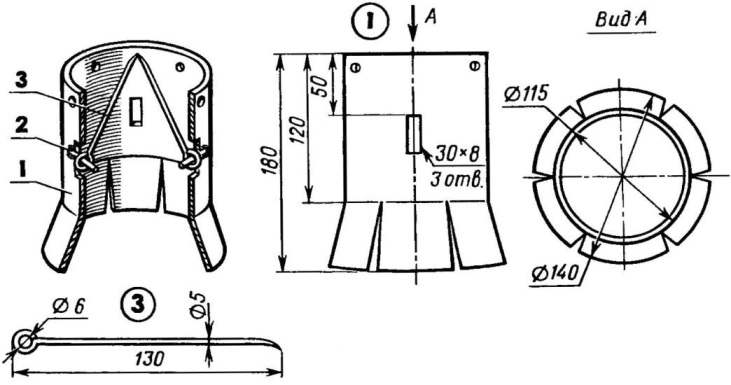 Trap-lift:
1 — housing 2 — axis (3 PCs.), 3 — hook (3 PCs).
The skirt fit at the meeting with the pole sent its top in the center of the pipe to hook. Those having the hinge first broke, letting the pole, and when lifting so I dug into it, which then had trouble freeing the captive.
I think that with some refinement this device can be used to lift the lost in the well, deep-well pumps, pipes and other items.
A. DODONOV,
Chebarkul,
The Chelyabinsk region.