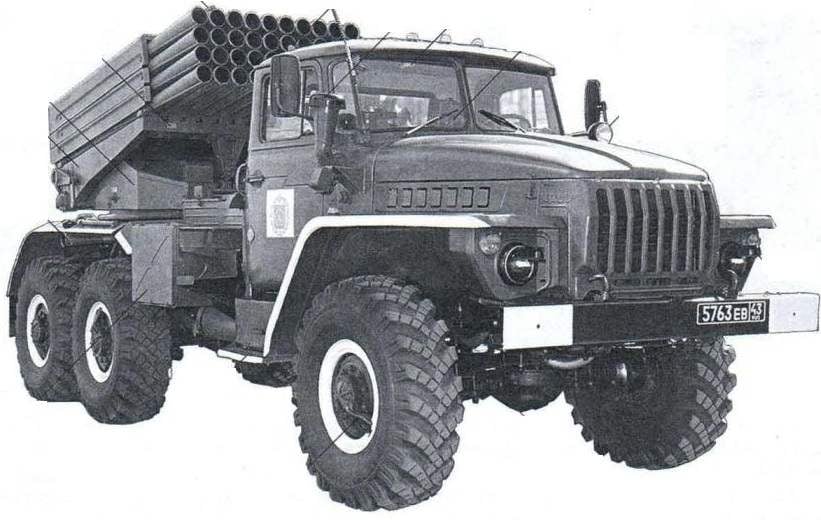 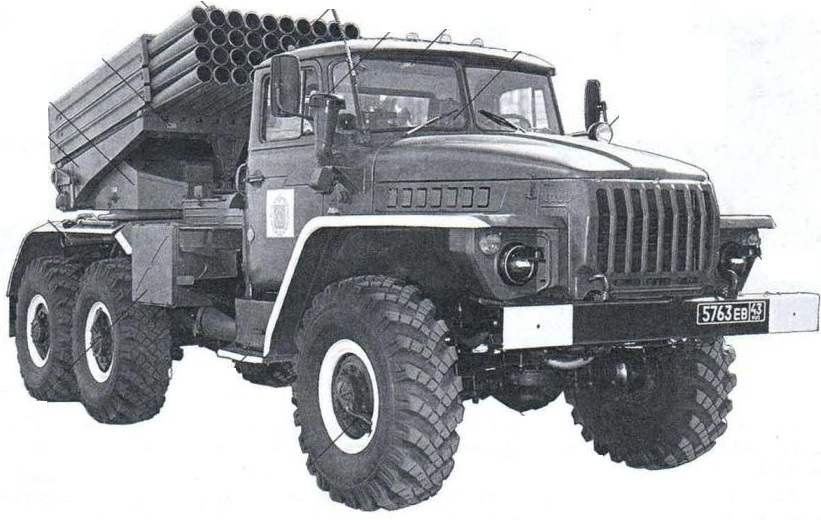 During the great Patriotic war of the Soviet rocket artillery has proved itself as a powerful weapon on the battlefield. Then the front got more than 10 thousand multiply launchers and more than 12 million rockets. As a part of guards mortar units were 38 separate battalions, regiments 114, 11 brigades and 7 divisions of rocket artillery.
After the war, steps were taken for the improvement and modernization of rocket systems of volley fire (MLRS) to reflect the latest advances in technology and the experience of combat use. So, in 1945, began the development of the fighting vehicles, long-range 200-mm jet systems of volley fire of MD-20 “Storm-1” with the shell of DRSP-1. It was followed by a 140-mm combat vehicle BM-14, which was adopted in 1952 and it still is in the army of some countries. In 1951 began production of MLRS BM-24-open frame rails.
May 30, 1960, issued a decree of the Council of Ministers No. 578-236 to start work on the field division of the reactive system “Grad”. Launcher M-21 was designed in Tula NII-147, SKB-203 Sverdlovsk (now Yekaterinburg), solid propellant charges was created in the Moscow NII-6. The lead organization was appointed NII-147, now SSPE “Alloy”. The project was led by chief designer A. N. Ganichev.
MLRS “Grad” was intended for destruction and suppression of manpower and military equipment of the enemy in the areas of concentration, suppress artillery and mortar batteries, as well as the destruction of fortifications, strong points and nodes of resistance. Specially for it was developed a new 122-mm high-explosive projectile M-21 OF (9М22), which is stabilized in flight as the tail, and spin, created on rails installation.
At first glance, the effect of rotational motion was irrelevant: ten revolutions per second of the projectile did not create enough gyroscopic effect but it is compensated for the deviation of the thrust of the engine. In order to use tubular rails, wings, feathers made folding. The selected stabilization scheme proved to be almost optimal and have accepted it for the next larger caliber systems “Uragan” and “Smerch”. Two pilot plants “Grad” successfully passed factory tests at the end of 1961 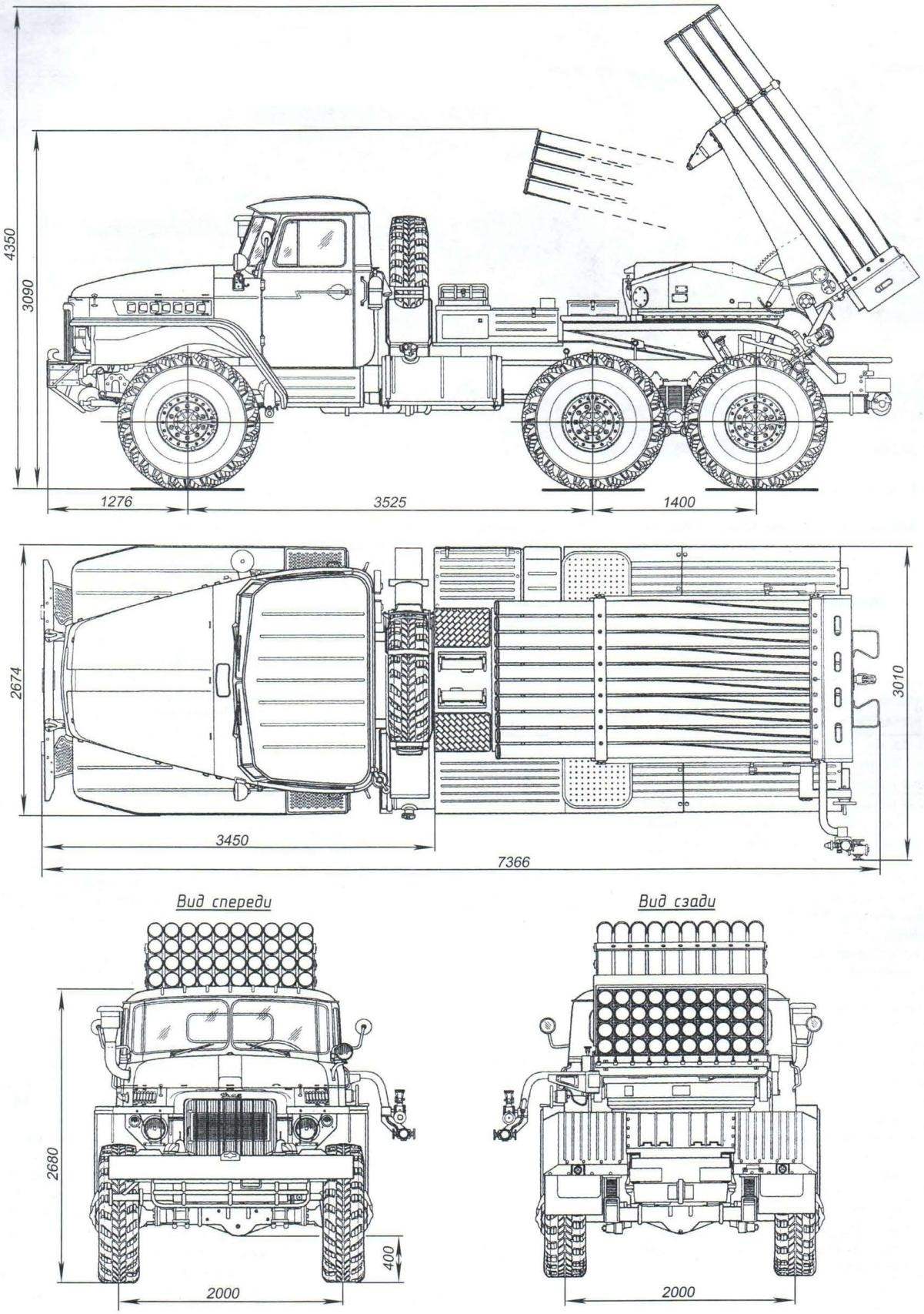 BM-21 on the chassis of GAZ-66
1 March of the following year in the Leningrad military district began the state-field tests of a complex “Hail”, was planned 663 start-up and 10 thousand kilometers of a combat vehicle. However, the installation 2Б5 was only 3380 miles – because of the failure of the left spar of the frame is overloaded the test was suspended. The artillery part of the system moved to the new chassis. However, again there were marked camber rear and medium bridges, bending the propeller shaft. However, the system “Grad” was adopted by the Council of Ministers of 28 March 1963, Then in 1964 began the serial production. In NATO countries the installation is listed under the index М1964.
Serial production of the BM-21 was conducted at the plant number 172 at Perm. In 1970 he produced 646 units, next – 497, of which 124 were exported. In the first half of 1972.
released 255 military vehicles, including 60 for export. By 1995, fifty countries had supplied more than two thousand MLRS BM-21. Serial production of missiles 9М22 began at factory No. 176 Priokskaya economic Council, planned in 1964 to manufacture 10 thousand shells.
Self-propelled gun BM-21 “Grad” was part of the artillery and vehicle chassis Ural-375Д.
Very artcast served for the guidance of projectiles aim and launch their rocket engine. It was a package of 40 tubular guide type: four rows of 10 tubes. Each of them had a spiral sulcus to the primary twist of the shells. The caliber of the pipe – 122,4 mm, length is 3000 mm.
Guidance package of tubes in vertical and horizontal planes was performed electrically or manually. The lifting mechanism is located in the centre of the base artcast, the fundamental oscillating gear part engages with the sector gear of the cradle. The elevation angle was attached to the root rotation of the gear.
The rotating mechanism was on the left side of the base; it was a fundamental gear engages with non-
30 m). Air blast substantially increased the affected area. Firing range with a radar Fuze – to 18.8 km.
Military exercises and participation in local conflicts have confirmed the excellent quality of “Grad”. The first baptism of fire the system received in March 1969 in the conflict between the USSR and the PRC at damanskii island. The island was then occupied by Chinese troops, and attempt to knock them out with tanks and armored vehicles failed. After a massive use of installations “Hail”, firing high explosive shells, the Chinese forces were completely destroyed. Actually, volleys of “Grad” and ended the conflict.
In the 1970 – 1990s MLRS “Grad” was used in almost all local conflicts in the world, in various climatic conditions, including extreme. In some cases the system was used by both sides. Thus, the Soviet Union supplied the Somali battery of four BM-21. But the main batch of BM-21, shipped, unloaded in Ethiopia. Later, these machines took part in the fighting against Somalia.
In 1992, the Russian troops in Chechnya left 18 BM-21 and 1,000 missiles. During the war, 1994 – 1995, both sides in Chechnya intensively used “Grad”. February 9, 1995, the chief of the General staff of defense, army General M. Kolesnikov said that from December 11 to February 8, destroyed among other Chechen vehicles 16 launchers “Grad”. More intensely complex “Grad” was used during the second Chechen war.
Over the years, the Soviet Union, and then Russia’s “Grad” was produced in several versions. 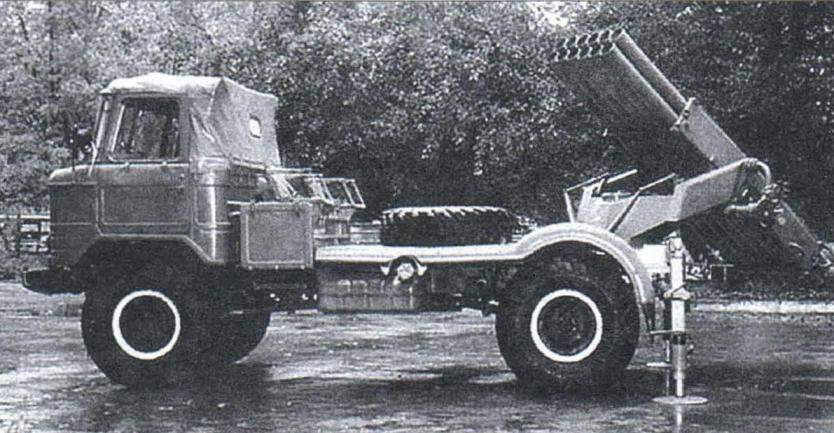 BM-21У on the chassis KrAZ 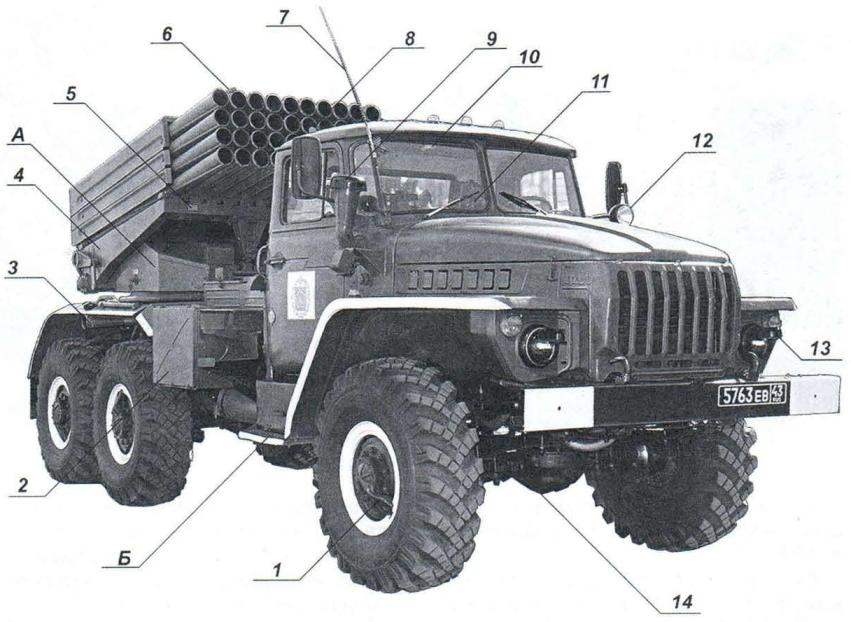 Automated fighting machine 2Б17-1
A – artillery unit 9К51, B – chassis – chassis Ural-4320-02, Ural-4320-10 or Ural-4320-31; 1 – a system of centralized tire inflation, 2 – drawer ZIP, 3 – exhaust pipe (from BM-21 silencer and exhaust pipe was under the front bumper), 4 – cradle launchers, 5 – device transfer data to remote start, 6 – apparatus for remote input of data on missiles fired, 7 – antenna of a radio transmitter, 8 – antenna satellite navigation equipment, 9 – air intake, 10 – control of the gunner, 11 – computer “Baget-41”, 12 – additional search spotlight-spotlight 13 – headlight with blackout (BM-21 there was a wire protective grille), 14 – odometer
BM-21 – the original MLRS vehicle chassis Ural-375Д.
BM-21-1 – streamlined installation 2003, on the chassis Ural-4320, further refinement in the process of production at the Motovilikha plant in Perm. Added a satellite navigation system NAP SNS, automated fire control system on the basis of onboard computer “Baget-41”.
9П138 “Grad-1” – 36-barreled lightweight version on the chassis ZIL-131. Complex 9К55 – from combat vehicles, missiles, munitions Transporter 9Т450 and charging machines 9Ф380. The installation could only use missiles “short range” up to 15 km In the West setting called VM-21 b or М1976.
BM-21 “Grad” was developed for the airborne troops since 1963, She had to replace the MLRS towed RPU-14 which at that time stood on the Navy. Developing a new system under the symbol 9П125 engaged in the State KB compressor engineering map and aggregate plant “Universal”. The system was lightweight 12-barrel 122 mm installation on the chassis of the GAZ-66B (GAZ-66 – in landing with no metal roof). “Grad-In” was placed in a military cargo plane, it was possible to parachute in a charged option on the airborne platform. The installation was accepted into service in 1967; For export it is almost not supplied. BM-21 participated in the war in Afghanistan. The symbol NATO – М1975.
9А51 – 50-barrel MLRS chassis Ural-4320. A launcher with a fire control system, cargo-loading machine and a new missile 9М53Ф built the complex 9К59. Time full volley of “Prima” was equal to 30 seconds. Unfortunately, due to financial difficulties the beginning of the 1990s, “prima” did not go into mass production.
“Grad-P” or “Guerrilla” – a portable complex created in the Soviet Union during the Vietnam war at the request of the government of Vietnam. On a portable launcher 9П132 weighing only 35 kg there was one tubular guide. The payment consisted of 2 people. The ammunition consisted of several shells, including 9М22М, which originally was created for “Grad-1”. It has a maximum range of 11 km, minimum 2 km. To improve the accuracy of fire at ranges up to 7 km on the shell worn brake ring with a diameter of 122 mm. Several hundred installations “Grad-P” set in Vietnam where they found wide application. Especially effective is “Grad-P” struck American airfields in South Vietnam. Manufacturer launchers 9П132 was conducted at the Kovrov mechanical plant. So, in 1970 he produced 406 units, of which 400 were exported to Vietnam. In the first half of 1972 he released another 155, all went for export.
BM-21ПД “Dam” – was developed for destruction of underwater saboteurs and midget submarines, while ensuring anti-sabotage defense at the point of Parking bases and ships, as well as in the protection of the operational phase marine state border. The complex operated in conjunction with sonar coastal defense or offline. The complex included a freight-loading vehicle. 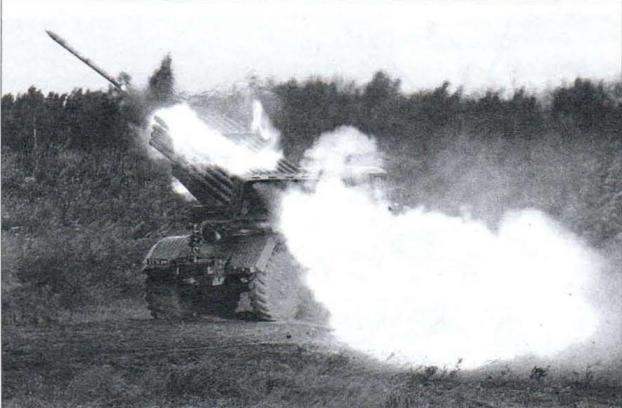 A Volley Of “Grad” 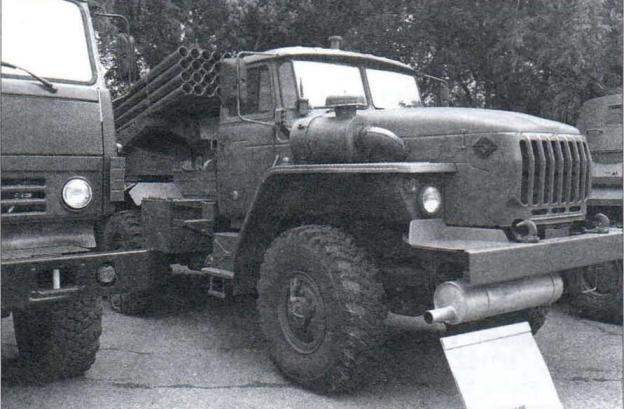 2Б17-1
2Б26 – fighting machine BM-21 MLRS 9К51 on the chassis of KAMAZ-53502.
A-215 “Grad-M” – 22-barrel naval version, adopted into service in 1978
Produced MLRS “Grad” and abroad. In 1975 in Czechoslovakia created a system KM-70: artillery system “Grad” set on the chassis of Tatra-813.
BM-21У “Grad-M” – Ukrainian version of the modernization of the Soviet BM-21 on the chassis, Krae-6322; there is also a variant on the chassis, Krae-6322-120-82.
Belarus produced reactive multiple rocket launchers BM-21 “Grad-1” (known as “Belgrade”) based on the MAZ-6317, which can accommodate two ammo instead of one. On the March the personnel carried in the cockpit and not to open the back, substantially in the climatic conditions of the middle band.
Another “Grad”, with the abbreviation FIROS (Field Rocket System – field rocket artillery system) is available in two versions FIROS 25 FIROS 30 Italian firm BPD Difesa e Spazio. The shells of both types have the same caliber of 122 mm, but they are equipped with various jet engines, thus have different maximum firing range. The launcher consists of two modules, usually going on the chassis of a 10-ton truck formula 6×6.
Copies of the “Grad” artillery with the same part but on different chassis, are produced in Poland (WR-40 “Langusta”), Romania (АРR-21, АРR-40), China (Toure 81 SPRL, SPRL Round 83. etc.), North Korea (VM-11, МRL. 122 М1977 and МRL TT 122 TT М1985), Iran (НМ20, НМ23 and Nmhh), Pakistan (КRL 122), Egypt (RC-21) and other countries. Today “Grad” and copies of it are adopted by 65 countries.
L. KASHCHEEV