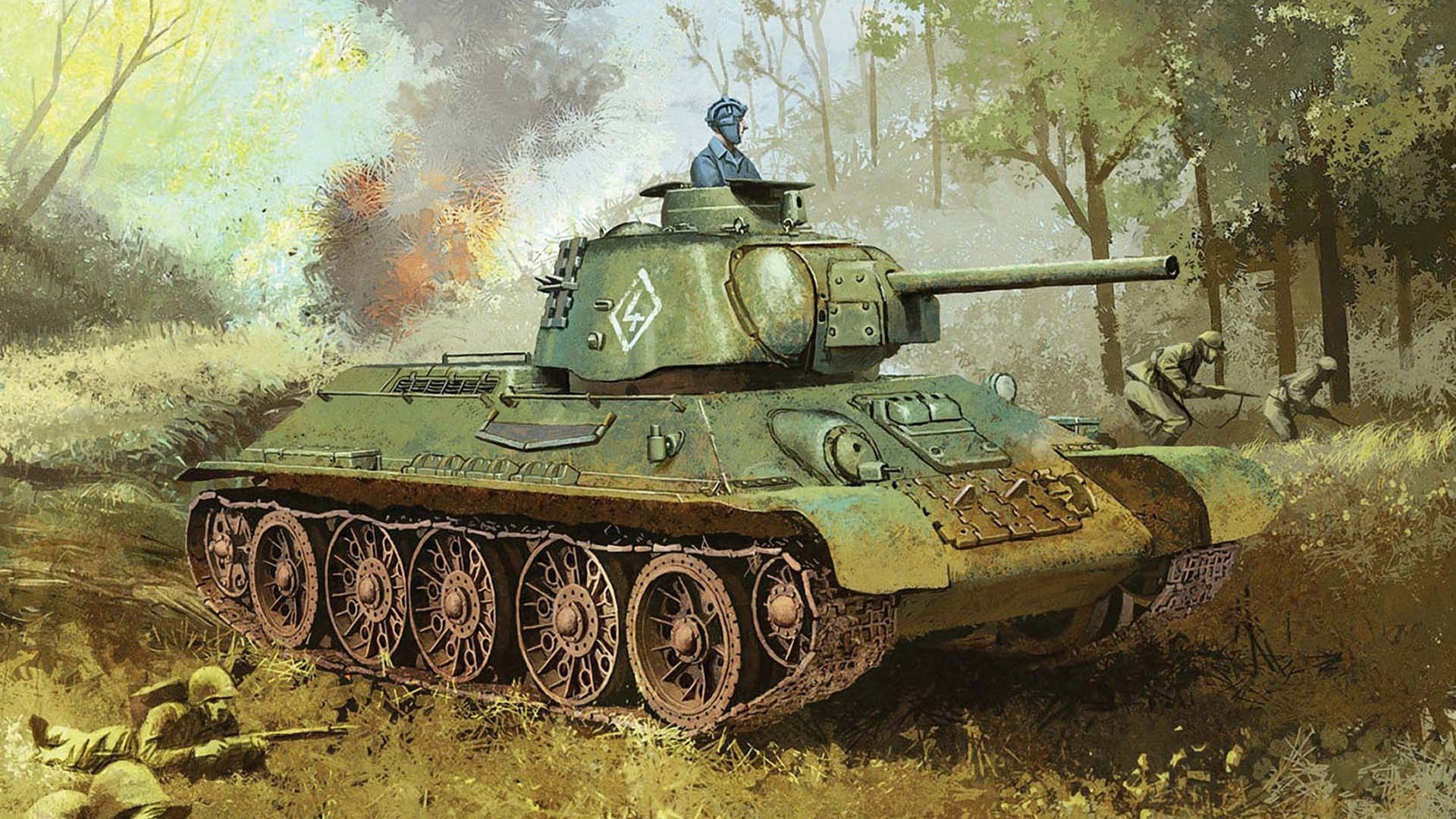 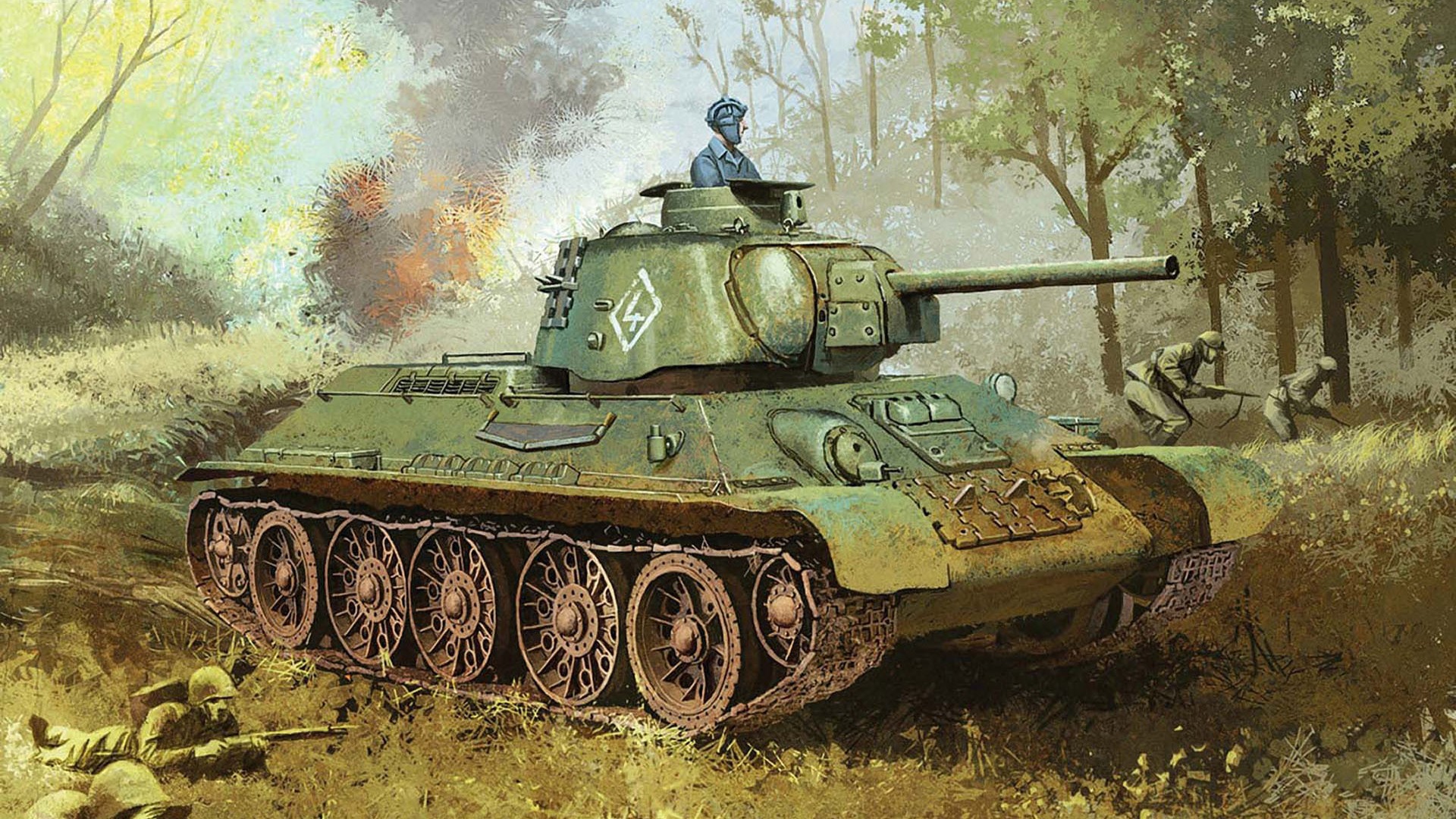 The real work of creating a new heavy tank in the program Panzerkampfwagen VI began in late January 1937, when the company Henschel was commissioned and started to design the combat vehicle under the symbol index DW1(Durchbruchwagen — car break). From September 1938, the firm began to develop a variant of the DW2, which had differences from its predecessor in design of the gear box, brake, caterpillars, airborne transmission, wheels and suspension. The tank was supposed to install the turret from the Pz.IV with 75mm gun and coaxial machine gun MG 34. The second gun should have been installed in the hull on the right. But in both cases it was limited only to the construction and testing of the chassis. 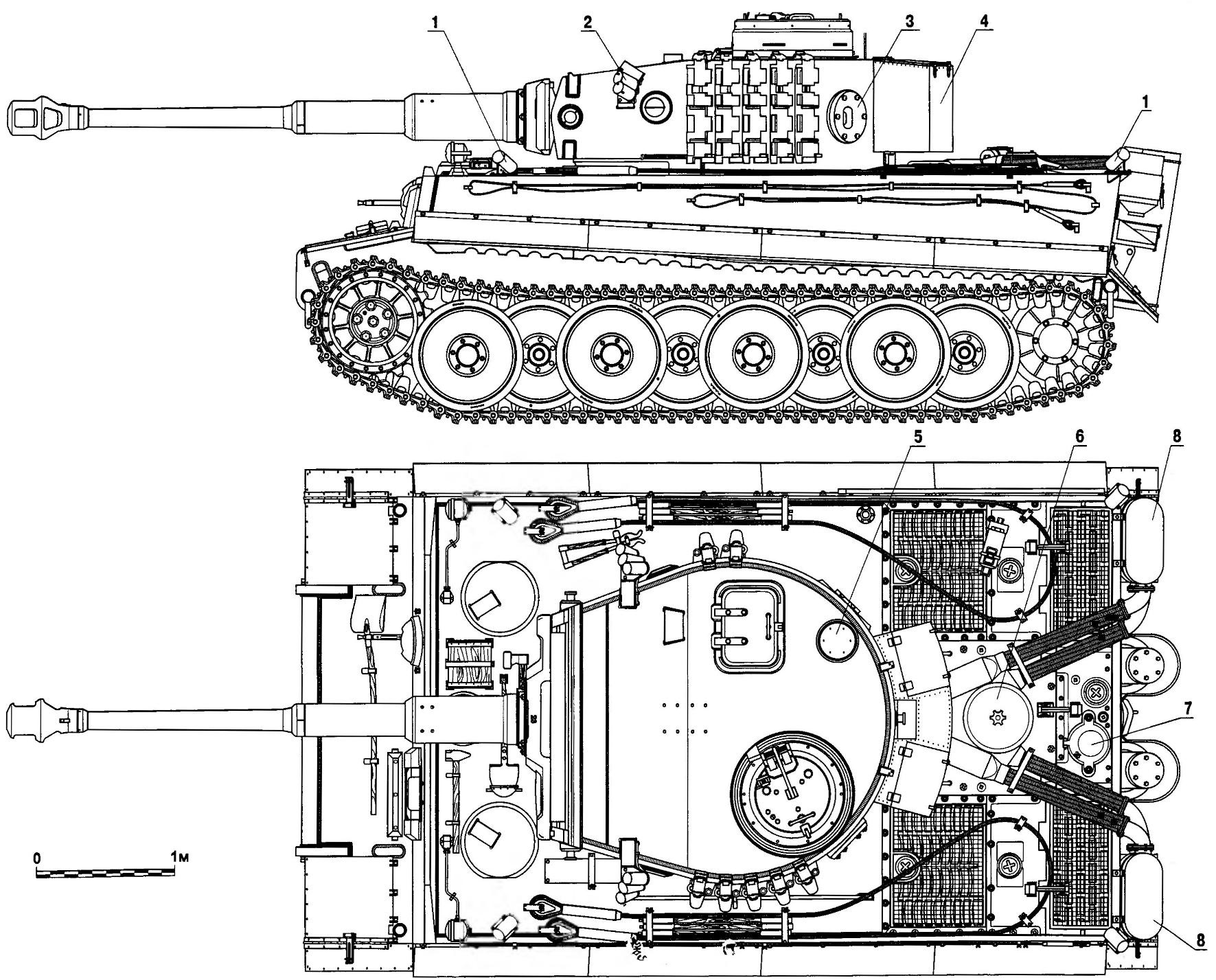 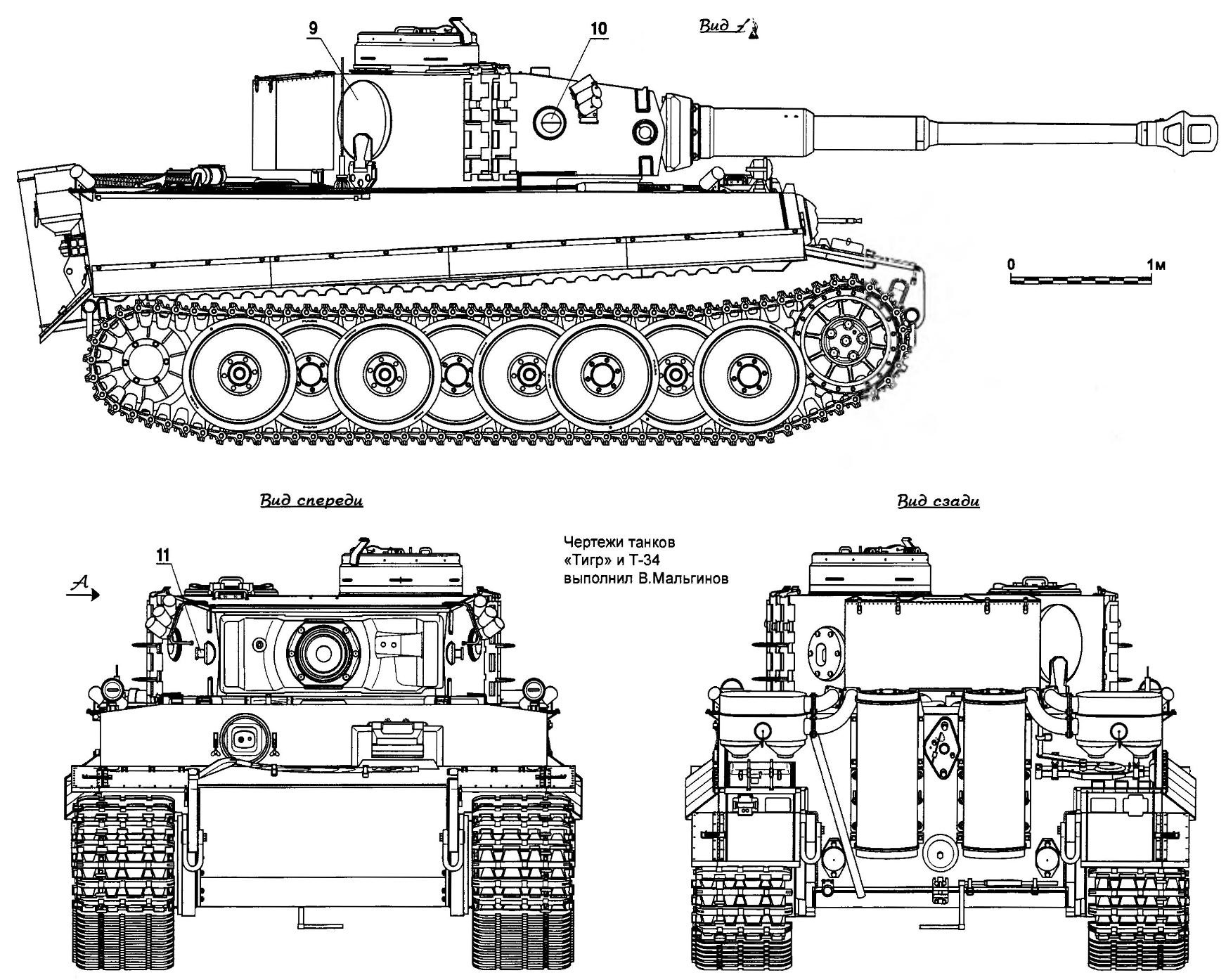 The heavy tank Pz.VI Ausf.E:
1 — morderca to start antipersonnel mines of the type “B”; 2 — mortice for firing smoke grenades; 3 — hatch with a porthole for firing personal weapons; 4 — drawer for equipment; 5 — fan cover; 6 — a cap over the window vozdukhoochistka; 7 flip cover over the access hole for the installation of pipe, OPVT; 8 — air filters Feifel type; 9 — side sliding; 10 — surveillance device; 11 — eye
18 August 1942 produced the first four “tiger”. The fifth and sixth cars on 27 August, was sent to Fallingbostel, where he formed 501 and 502 heavy tank battalions. Collected tanks at the plant of the company Henschel in Kassel. To the production of the towers attracted the firm Wegmann. In the production process, in the design of the tank is produced in one modification, almost continuously make changes and improvements. From the first mass-produced cars have changed the box for equipment and spare parts were fastened to the stern of the tower. The prototypes used a box borrowed from Pz.Kpfw.lll. A hatch with a porthole for firing a personal weapon on the right side of the tower was replaced on the manhole. For self-defense against enemy infantry on the perimeter of the body mounted anti-personnel mines mortice for “S” type. This mine, the warhead which contained 360 steel balls, were fired at low altitude and exploded. In addition, the turret of early releases installed smoke grenade launchers NbK 39 Caliber 90 mm (three on each side). The latter could also be used for firing mine-type “S”. On cars of late releases for this purpose were mortica mounted inside the tank and shoot through the recess in the turret roof behind the loader hatch.
Since the second half of 1943 at the “tigers” (with 391-first car) began to install a new commander’s cupola, unified with a turret of “Panther” and had the device for mounting anti-aircraft MG 34 machine gun and periscope surveillance device in front of the hatch charging. Changes were made to the trigger mechanism of the gun, locking the gun in its stowed position, coaxial machine gun mount, seats, crew members and others On her side placed laying spare truck that was located only on the lower front hull. Five trucks were attached to the left and three on the right side.
Has undergone changes and propulsion tank. On the first 250 machines installed engine Maybach HL 210Р30, on the other — Maybach HL 230Р45. For use in African desert and in the southern regions of Russia on the aft hull mounted air filters Feifel.
The first 495 tanks were equipped with equipment for underwater driving, which allowed to overcome its course along the bottom of water obstacles to a depth of 4 m On a special hatch in the roof of the engine compartment mounted three-meter telescopic pipe for supplying air to the engine. The exhaust is made directly into the water. All the hatches of the tank had a rubber seal. At that time “Fever” was the only production tank in the world, features in droves the equipment for underwater driving, which has found wide application in tank only in 50-ies. However, in the army’s equipment was not employed and he eventually refused.
The weak point of the chassis “Tiger”, which could not manage to get rid of, was the rapid deterioration and subsequent destruction of the rubber tires rollers. Starting with the 800-th machine on the tank started to install track rollers with internal amortization and the steel rims. In this case the outer row of rollers single shot.
“Tigers” was used two types of caterpillars: a transport — width 520 mm and the fighting — of a width of 725 mm. the First were used for transport by rail in order to fit into the envelope of the platform and for its course on paved roads outside of combat. (When transporting tanks often filmed and outer rollers.) When using transport tracks specific ground pressure increased to 1.53 kg/cm2.
In 1942-1943 the Germans formed ten heavy tank battalions of the Wehrmacht and the four companies for the divisions “grossdeutschland”, the “Leibstandarte SS Adolf Hitler”, “Reich” and “Totenkopf”. On the basis of these companies then battalions were formed. 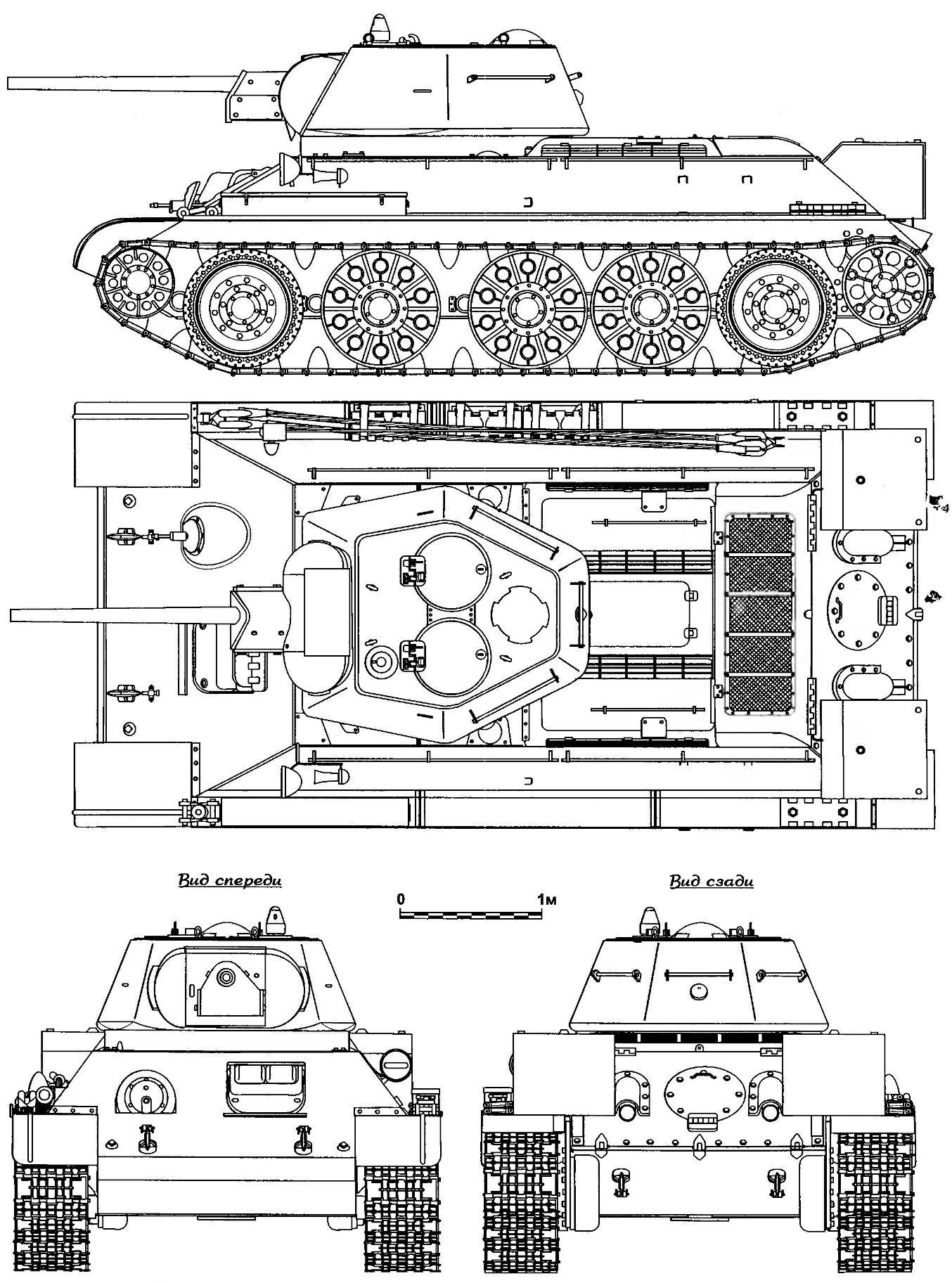 T-34 model 1942
Most heavy tank battalions fought on the Eastern front. Never showed sPzAbt 504, which operated first in Africa and then in Italy, and sPzAbt 508, also fought in Italy. On the Eastern front were all the company, and also one of formed on their basis, the 3rd battalion of the motorized division “Great Germany”. Other battalions fought in the West.
Most massively “tigers” were used during the operation “Citadel”. By may 12, 1943 for participation in this battle was planned to have 285 combat-ready “tigers,” but this plan is not fulfilled by passing the troops only 246 cars. A considerable part of them was concentrated in the Orel-Kursk salient. Directly in the operation “Citadel” was attended by two heavy tank battalion (503 and 505) and four companies in the composition of the motorized divisions.
On the Northern fase Kursk bulge against our Central front had been only one — 505-th heavy tank battalion (45 “tigers”). Together with the 2nd German Panzer division, under the operational control which he was, the battalion attacked positions of our 70-th army in the direction Podolyan ‘ — Saburovka Warm. In the fighting, according to German reports, have been irretrievably lost three “typhus”, which in General coincides with our data, because between the settlements of Samodurovka, Kashar, Butyrki, Warm, height 238,1, the field size 3×2 km after the fighting was discovered 74 wrecked and burned-out German tanks, self-propelled guns and other armoured vehicles, including four “tiger”. It should be noted that, even though the number of lost “tigers”, the number involved in the fighting machines of this type was small due to the large number of failures, breakdowns and malfunctions. For example, on 13 July in the ranks of the battalion had only 14 combat-ready “tigers.” The rest of the required repairs of varying complexity.
In the 503rd heavy tank battalion to the beginning of the battle, there was a 42 “tiger.” The battalion was on the southern face of the Kursk bulge, composed of the 3rd Panzer corps of the operative group “Kempf” and acted in our line of defense of the 7th guards army. His loss in these battles was, according to German reports, four of “typhus”.
As for the battle of Prokhorova, the direct participation of 11-12 July 1943, adopted the “tigers” motorized divisions “Leibstandarte SS Adolf Hitler”, “Reich” and “Dead head” — a total of 42 machines of this type. Even 15 “tigers” had motorized division “Great Germany” advancing on Obeanska direction.
Thus, in the operation “Citadel” was attended by only 144 heavy tank “Tiger”, which is only 7.6 percent of the total number of German tanks involved in the attack at Kursk. Significant impact on the course of events, they of course have could not, moreover, been applied quite separately. If you believe the German data, during July — August 1943 irrecoverable losses amounted to 73 of the tank “Tiger”, and by the end of the year 274 of the tank. Thus in 1943 to service after repairs he returned only 19 tanks of this type!
In contrast to the Panzerwaffe that was used at Kursk three new products — the “Tiger”, “Panther” and “Ferdinand” tank troops of the red Army met the enemy shot in the same composition. However, by the summer of 1943 changed the structure of the tank fleet that reduced the number of light combat vehicles and significantly increased the number of averages. The main Soviet tank was T-34, while its design during two years of war has undergone significant changes. 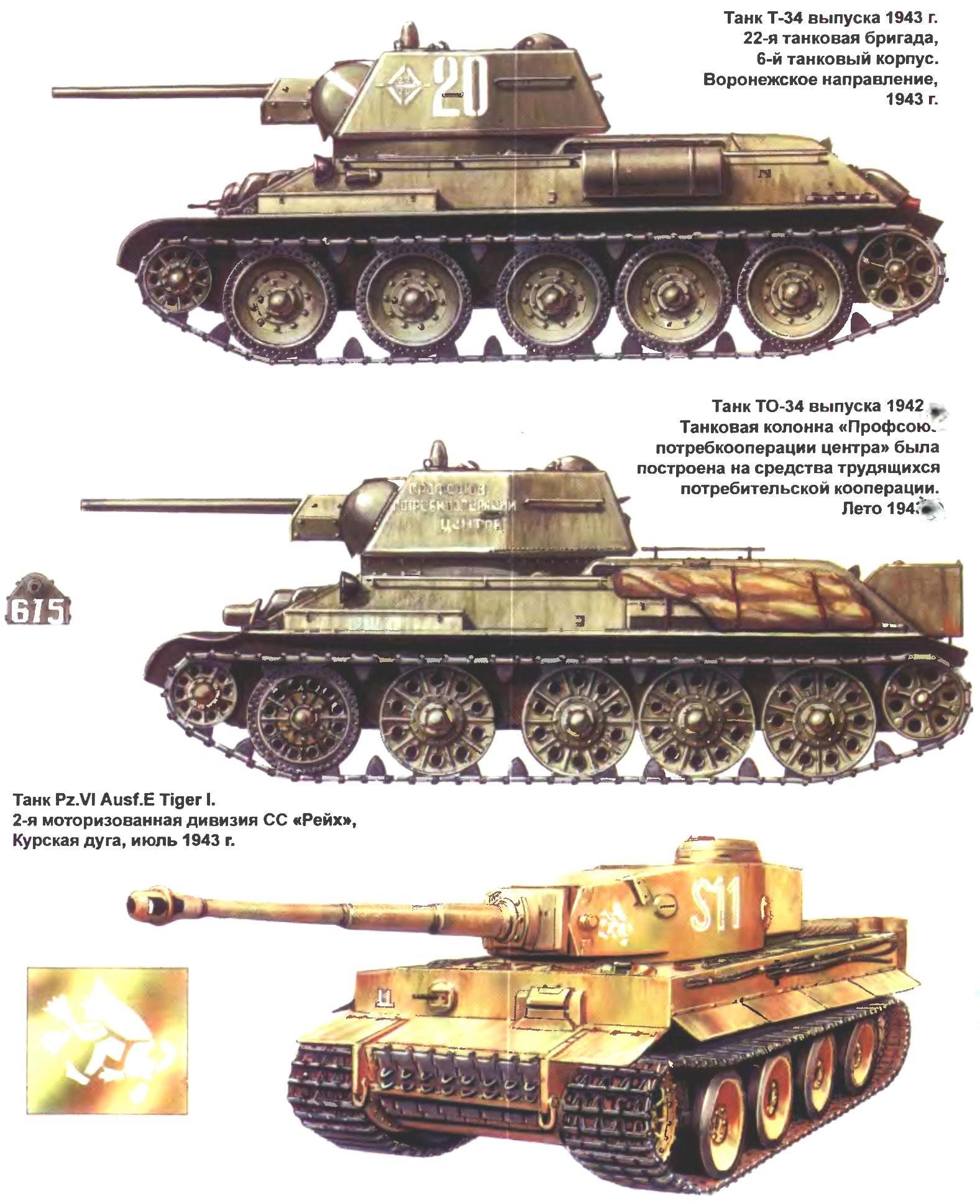