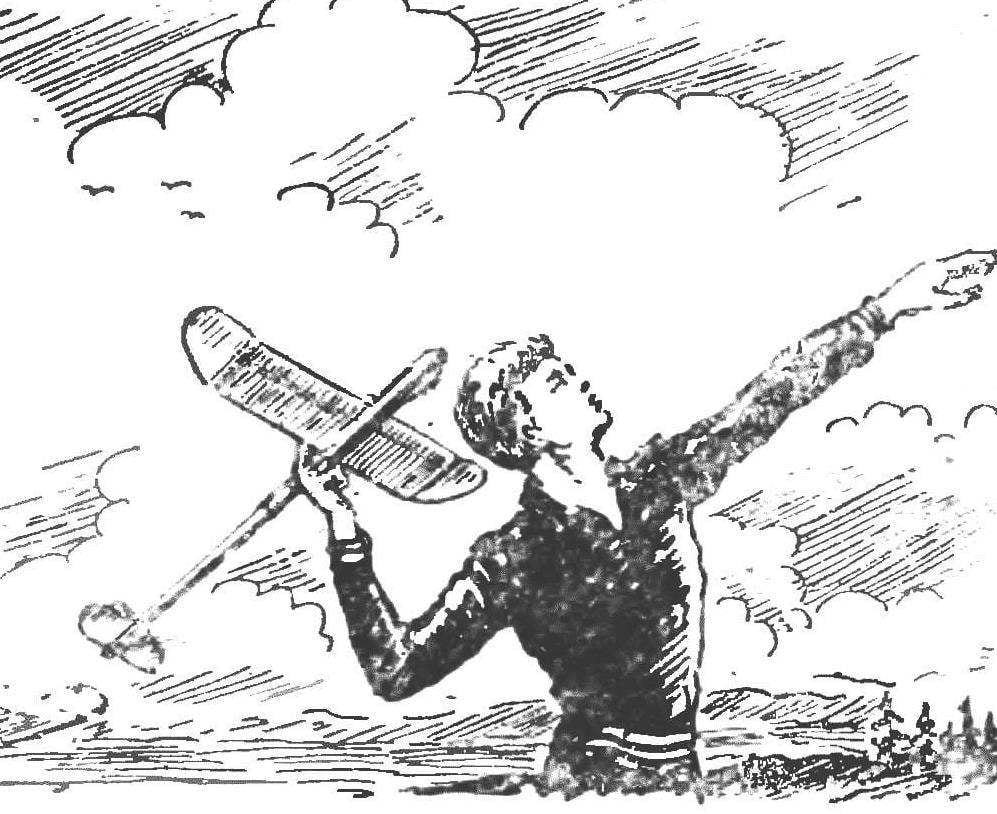 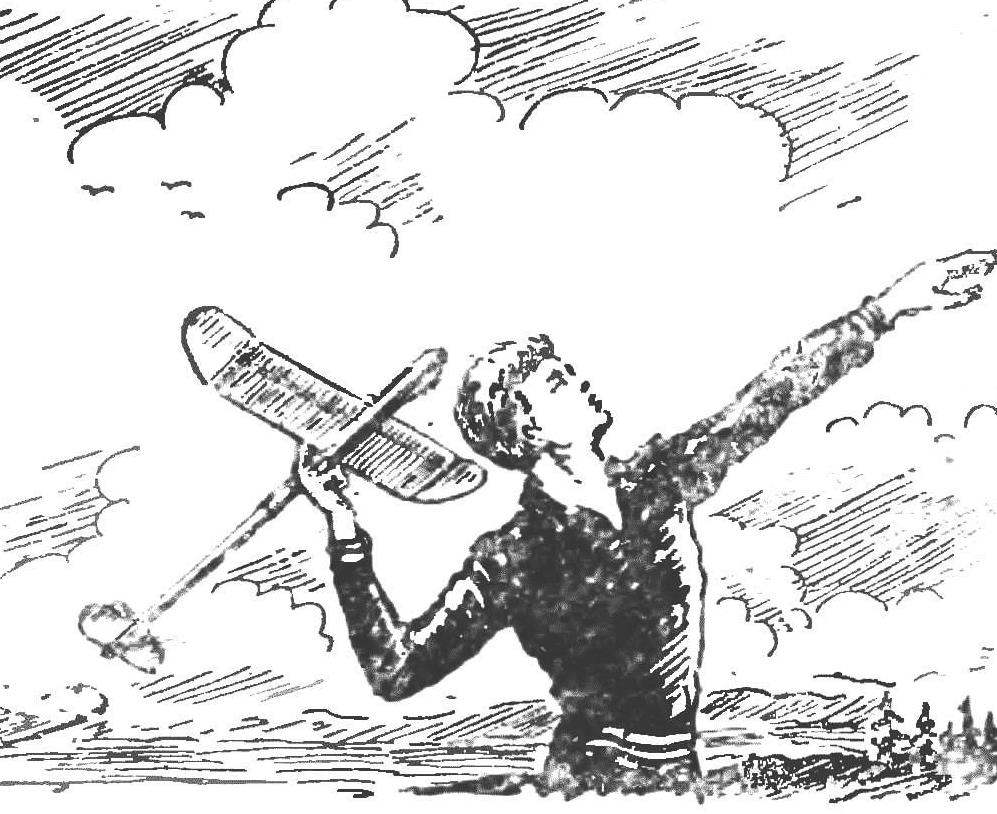 Small model scale of about half a meter and weighing 20-30 grams at first glance give the impression of toys. But as soon as test flights, the opinion of inexperienced viewers immediately changing! It turns out that the apparatus according to the flight properties left far behind their paper predecessors. Running in the sky sharp throw hands, they are capable of rapid start, similar to the motor-take off the good timers.
One or two dozen meters in height, recruited during takeoff is not the limit for them. No less impressive, and the results of flight time, which, in fact, is a criterion for judicial evaluation. On most sports throwing gliders you can see determiniation device performing a forced landing after a flight on “maximum”. What is this, a fad or too high opinion of modelers on flight properties “paritala”? The fact of the matter is that, essentially, the quotation marks are not needed — these models are really soaring in ascending air flow (unless, of course, the athlete was able to determine their presence and properly launched glider right in the term), often far away from the start, gaining considerable height.
And problems to be solved when building such models, even in comparison do not go with the paper. Produced several cognacy-“schools” of design and balance, and apply various methods of training and running.
To models throwing gliders is presented almost one requirement — set the height only by inertia, from the throwing hand. All known models alnabulsi, for large sometimes uses a simplified diagram of a stacked wing. If you decide to build a soaring leader, and there are no balsa — do not worry. Scarce wood successfully replace the foam different types and brands. White dense (polystyrene) foam even without the exterior-stitched can give interesting results in the manufacture of bearing areas. More porous varieties with close-fitting surface of the paper give the gain in weight. The main thing when working on a model attentive to the design of cargohose simple machine and be extremely careful when working on them. Then microportal will reward you for your efforts excellent performance of flights.
The proposed design of throwing the gliders — “transitional”, as they are designed for young and adult athletes. Yes, do not be surprised! This interesting class found recognition among a wide range Czechoslovak modellers, and competitions are held in both age categories. Let’s hope that someday the category of “Throwing gliders” will appear in our rules on aviamodelling sports. 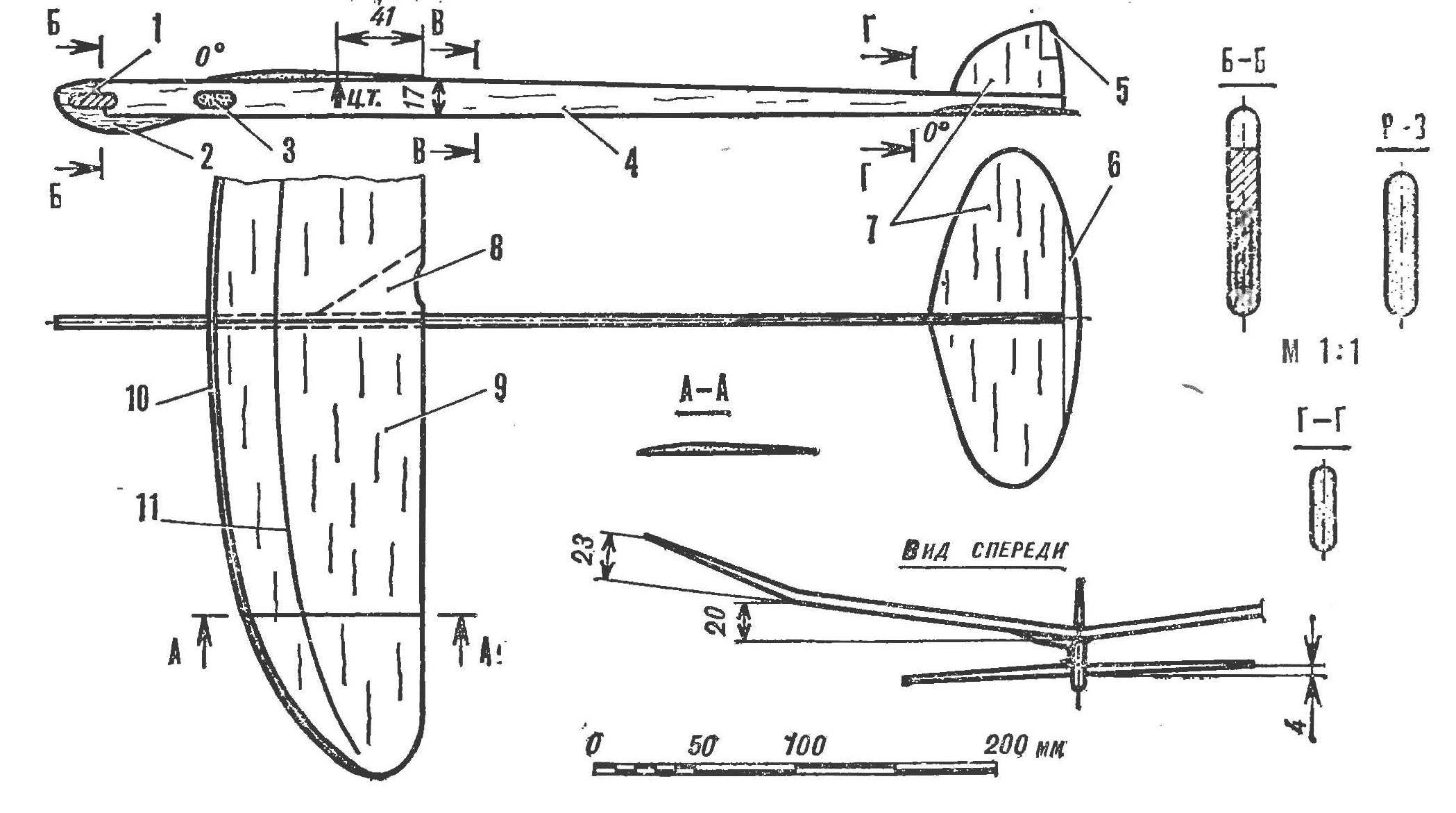 Fig. 1. The first option is throwing glider model:
1 — centering weight (tin), 2 — socks the fuselage (plywood B 3 mm), 3 coarse sandpaper (on both sides of the fuselage), 4 fuselage (balsa p = 0.2 g/cm3; B 3 mm). 5 — Rudder, 6 — Elevator, 7 — tail (balsa p = 0.06 g/cm3; B 2 mm), 8 — usilenie finger (Plywood B 1.5 mm), 9 — wing (balsa p = 0.1 g/cm3; B, 4 mm), 10 — front edge (bamboo torch), .11 a — line maximum profile thickness of the wing. On the top view, the wing deployed to the plane of the drawing (pattern).
DESCRIPTION OF THE MODELS
These gliders have repeatedly shown good results in competitions. For simplicity, they are not equipped with determinisation, although in some cases this device would be useful. The first, easier model designed to fly in calm weather, the latter is used when aetre or significant turbulence of the air.
Work on microparticulate begins with the selection of suitable balsa. For different items you will need and wood of different density (the value of the last shown in the drawings). In addition to specific gravity, an important and direction of the annual rings at the ends of the blanks. Wings and stabilizers with fins is worth doing only from plates with horizontal layers — this will ensure preservation of a given shape on all planes and greater rigidity of the parts. On the fuselage can go cutting any balsa, it’s about the absence of ROE and durability of wood for high-load element.
For processing of the supporting planes used only three sandpaper grit — medium, small and fine. Sheets of sandpaper glued on a flat plywood plate having a size of 50 X 200 mm, without these “substrates” emery banggai can not be used.
Posledovatelnosti profiling is as follows: first cut a fret saw along the contour and wyrownania the lower surface of the workpiece-carrying planes is fixed on a flat, clean Board. Then a small plane removed a substantial excess of material and with the help of skins shanaitsa smooth “wedge” from pine Maksimalna profile thickness to the rear edge. After completion of this operation the wing is profiled along the front. The ends of the “ears” courivaud to the minimum thickness.
Solee legni version of glider has a stabilizer with carrying a PLANO-convex profile, the technology of its processing like the manufacture of the wing. The second variant is equipped with a horizontal tail with the profile of “smooth Board” with rounded edges. The keels of both models of the symmetric profile.
For the formation of double “V” wing cut into four pieces with a jigsaw with fine teeth, nail file, then butt mowed down the surface of the skin so that joints are stacked under the required angles of the parts were virtually no gaps. Incorrect fitting of parts may result in deformation of the entire wing and the setpoint profile! Bonding — using nitrosothiol, with a mandatory pre-primed joint surfaces.
The Assembly process of the two models is identical. First (again with the obligatory primer!) the fully equipped fuselage and my wing was governed. During the entire time the glue is controlled by the accuracy of the relative position of the parts. Then installed with the specified inclination of the stabilizer and fin, which is cut with a razor marked “rudder”. The bottom surface of the root right of the console is enhanced with plywood covering support under the index finger. Here, the most suitable adhesive is epoxy, it will help to fulfill the fairing a small radius on the most intense connection right console with the fuselage. The front edge of the lining is treated “on condition”. It should be noted that the drawings of models, designed for athlete-right-handed, otherwise gliders should be “mirrored”.
Exterior finish — three to four-fold coverage of sexoverdose much by razbavlenii finishing nitrocellulose lacquer with intermediate proskurivskyi dried layers, followed by applying two layers of a mixture of liquid nitro lacquer and powder. To achieve a high surface quality is possible only with relatively light airframe, otherwise reserve to finish the homemade putty will not remain — a significant increase in weight (up to 50%) does more harm than a lower quality finish. After drying putty model neatly polished. The paint is generally not used because of the stringent requirements of weight models.
Manufacturer of gliders gluing ends with the “snout” of the major skins IV both sides of the fuselage. Exact location to be determine — it depends on the anatomy of the hand. The capture of the fuselage with thumb and middle finger the last bend of the index must accurately account for the cutout right console, the whole hand most open, the index finger moves back. Only such capture models can provide a good shot at the start.
Both glider is designed for soaring in a left turn with a diameter of about 20 m. the Second variant of the model can be debugged to fly a larger circle; in conditions of thermal upward flow it will automatically reduce the radius of the bend. The required characteristics are achieved at the expense of small (2-3 mm) of limb “rudder” to the left.
If the gliders after throwing rapidly falling toward the ground, this means that are not exactly seasoned a predetermined position of the center of gravity (the latter shifted forward) or the mounting angle of the wing relative to the stabilizer is less than zero. The inaccuracy of the Assembly offset, performing a light cut along the trailing edge of the stabilizer followed by a slight limb resulting “wheel” up. In the same way get rid of the stalling model after throwing in a sharp downward spiral. In any case, the angle of the limb “wheel” should be the minimum, required large angles indicate only incorrect Assembly or leashes model. After the flight the rudders are fixed in the provisions of the glue. 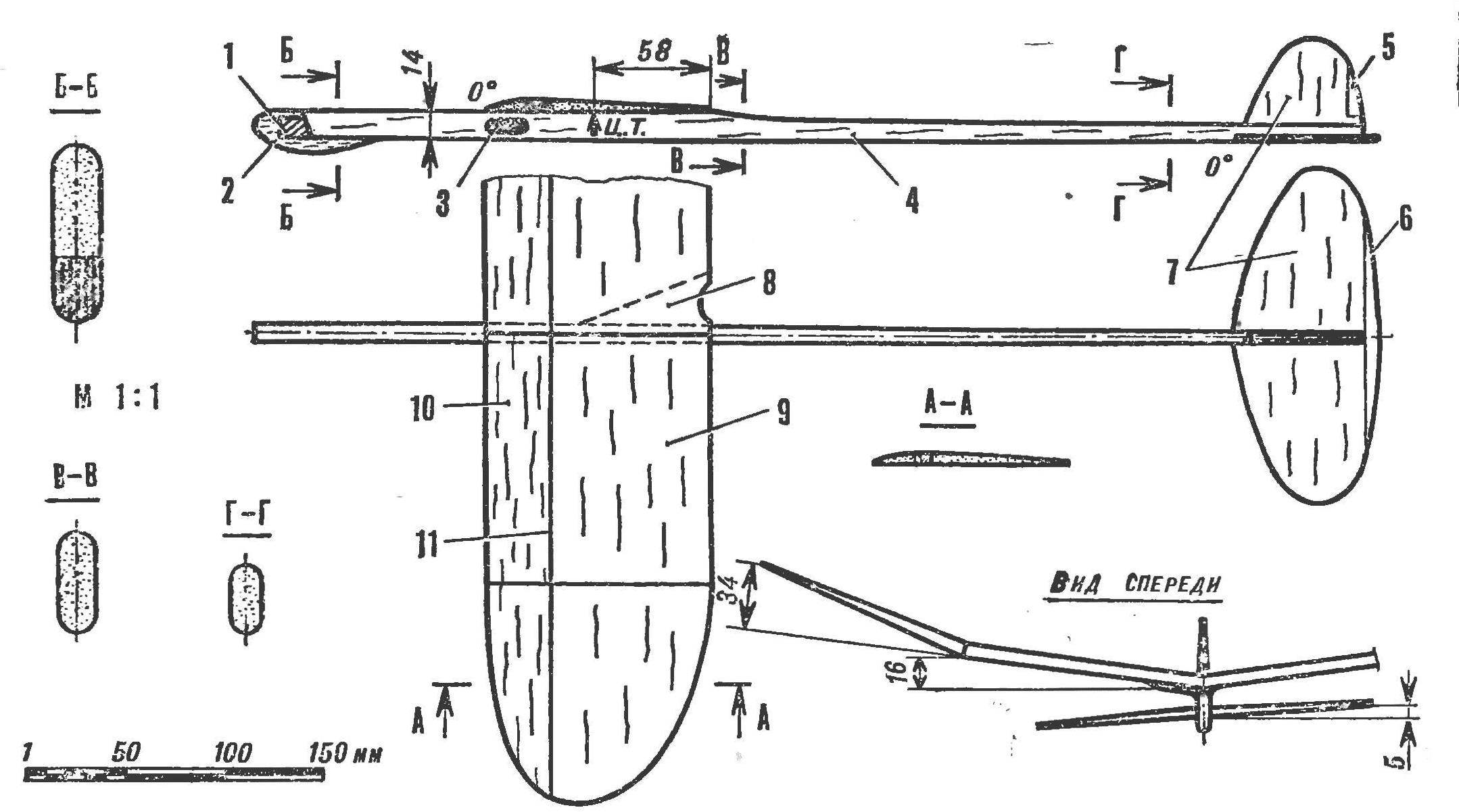 Fig. 2. The second option is throwing glider model:
1 — centering weight (tin), 2 — socks the fuselage (plywood B 5 mm), 3 coarse sandpaper (on both sides of the fuselage). 4 — the fuselage (balsa p = 0.2 g/cm3; B 5 mm). 5 — rudder, 6 — Elevator, 7 — tail (balsa p = 0.06 g/cm3; B 2 mm).
8 — strengthening the pin (plywood B 5 1 mm). 9 — rear wing (balsa p= 0.08 g/cm3; B 6 mm). 10 — front part of the wing (balsa p = 0.12 g/cm3; B 6 mm). 11 — the line of maximum thickness of the airfoil On the top wing deployed to the plane of the drawing (pattern).
Even an established airframe, maybe after the climb, not clearly go into the planning. Then reduce the area of the left wing. Some models require swegene to 5 mm on the contour of the “ear”, but at one time cut off no more than one millimeter. Thus consistently achieve a smooth transition to a hover without kupirovaniya and loss of height. Of course, after cutting the “ear” sanded on the edges.
The result of the flight not less affected by the right execution of the throw. It is best to Preface it with a small running start, and the end of which the glider with Maksimalna speed forward runs – top. Long run is meaningless, does not give good results and start. It is useful before each roll “mash” hand multiple simulation movements (remember how preparing for the performance athletes). Necessary and home exercise in the field model you can substitute tennis ball.
The achievement of high results will help good knowledge of meteorological conditions and characteristics of different heat flows. It should be noted that to achieve maksimalnog time simple plan even with the maximum height of the launch is extremely difficult, almost impossible. To achieve “maximum” will help the term. The proposed model well respond to updrafts and can fly. With this in mind, for performances we need to have multiple gliders.