The victory of the Soviet troops in the forty-second and forty-third years had tipped the scales of war in our favor. The enemy got an object lesson. Failing two consecutive critical operations such as “Typhoon” and “the Citadel”, where the rate was in the tanks, after losing the battle of Stalingrad, in which Soviet armored vehicles went far not last role, the fascist command was forced to seriously attend to the problems of his tank.
Another would be: some two years ago T-III with a 30mm frontal armor and a 37 mm cannon walking the March was held on the roads of France. And in 1942, having armor, reinforced with screens up to 80 mm and 50-mm gun, this tank (along with T-IV, armed with 75-mm cannon) could not withstand the impact of Soviet technology on the Volga.
In the July battles, forty-two were tanks “Panther” T-V “Tiger” T-VI (“Tiger”-VI-N). The first of them had frontal armor of up to 85 mm, the second — up to 100 mm. And the “shirt” self-propelled guns “Ferdinand” has reached a possible limit — 200 mm, However on the battlefield has a rival, who was able to destroy these steel shields: Soviet heavy tank KV-85, the famous T-34 and finally, self-propelled guns SU-152.
But all Hitler’s tanks were developed not in a hurry. In Germany already in 1940, was created prototypes of a powerful armament and booking combat vehicles. Judging by the print of 1940-1941, experimental tanks Nazi Germany had characteristics that placed in the table.
As you can see, the car under the T-VI and T-VN roughly corresponded to the “Panthers” and “tigers.” Some of them were tested back in the days of the defeat of France: in the Swiss and American press insistently repeated information about the powerful new German ganks allegedly destroying the French bunkers.
Under the influence of the superiority of Soviet armored equipment of Hitler’s designers went to upgrade its medium tanks, and then turned again to the “Panther” and “tiger”, which rejected early in the war. In the calculations of our command was taken into account that the release of enemy armored vehicles can be greatly increased. I do not exclude the possibility of the emergence of new machines of the enemy. 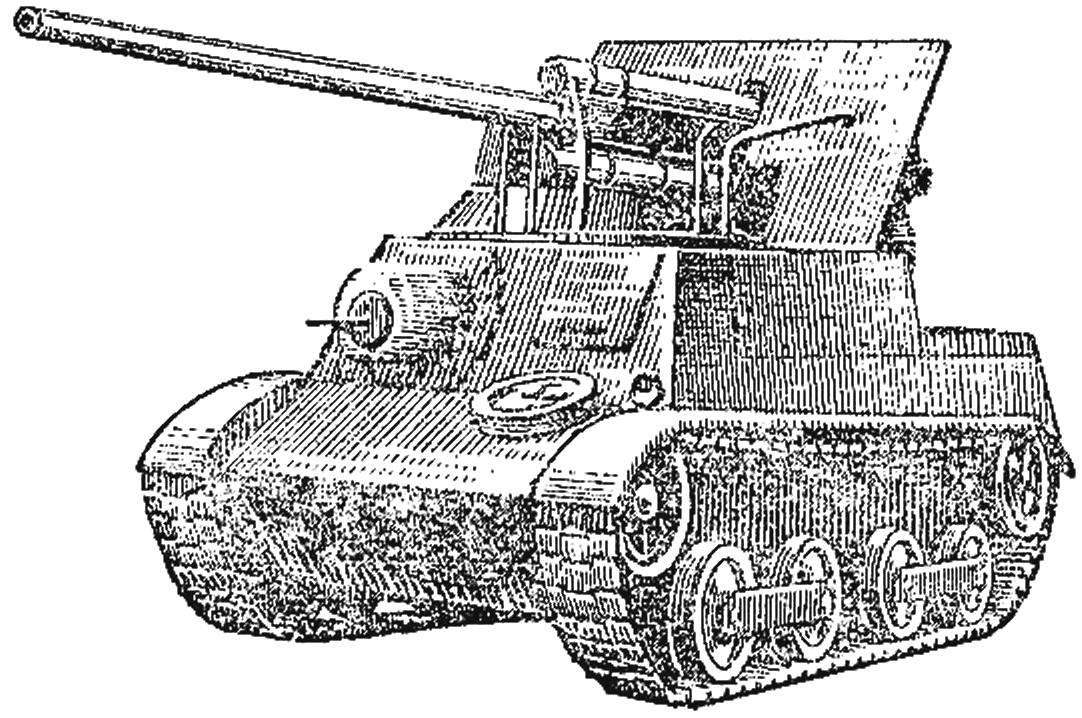 Fig. 2. SU-76M.
From the first days of war in the Soviet Union to fight enemy tanks was created self-propelled artillery anti — tank weapon with good maneuverability. So, in 1941, was released 100 tank destroyer ZIS-30. It was 57-mm ZIS-2 designer V. G. Grabin, mounted on partially armoured artillery tractor “Komsomolets”. How important is this page of history, says at least the fact that the prototype gun was shown at the Kremlin. These ACS are further distributed by tank brigades, defending Moscow (Fig. 1).
Experience in the application of the self-propelled artillery once again confirmed that the most effective in combat those weapons, which means the thrust and the calculation of armor. Therefore, further development received a more powerful SU-76M, SU-122 and SU-152 (Fig. 2, 3, and 4|g who played a major role in the battle of Kursk in July of the forty-third.
However, the experience of the July battles revealed, or rather confirmed some of the shortcomings of the new guns. In early 1943 there was held a special shooting on the tank “tiger”, captured in the battles near Leningrad. M-300 (model 1938) mounted on the SU-122 had insufficient rate of fire and low flatness. In General for shooting at fast moving targets it was not well suited, though possessing thirds penetration. SU-152 with all its firepower and armor, the many sedentary and could not accompany the fast T-34. Self-propelled installation SU-76И, produced from January 1943, pierced the armor of the “tiger” only from relatively close range.
The conclusion suggests itself: required-self-propelled with high traffic and good armor (100 mm or more), having weapons that can deal with tanks and assault guns of the enemy.
Experienced shooting the “tiger” also showed that fire 45 – and 76-mm anti-tank guns at a distance of 1000 m is ineffective. Then to the test “called” 85-mm anti-aircraft gun model 1939 and 122-mm gun Cabinet specimen of 1937-1939. Shooting encouraged. The ballistics of the 85mm gun was adequate for the task — to penetrate the armor of heavy tanks of Nazi Germany at long range shooting.
The design Bureau, led by Hero of Socialist Labor, F. F. Petrov, based on the 85-mm anti-aircraft gun, in a short time has developed a tool Д5С. Its armor-piercing shell at a kilometer distance pierced the armor thickness of 102 mm, and piercing — 103 mm. 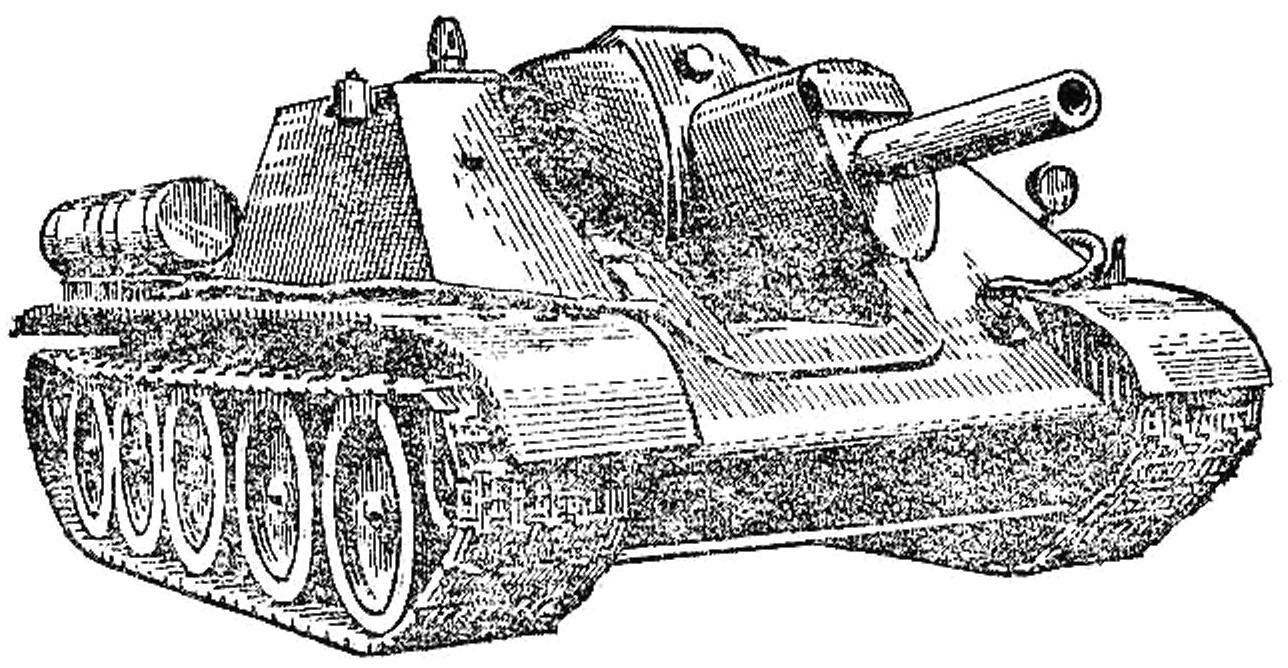 Fig. 4. The SU-152.
Base for guns decided to use the previously created self-propelled installation SU-122. Gun Д5С loosely placed on technologically advanced, reliable and lightweight gimbal without the use of upper and lower machines that were given the extra “living space” war Department. Sheltering armor and recoil of the device.
In August 1943, a new self-propelled artillery unit has passed testing at the site. The combination of high passability and reliability of the T-34 and power 85 mm gun allowed the specialists to give this vehicle a high rating and allow its mass production.
Ural-propelled guns began to enter service with the separate self-propelled artillery regiment (SAP), which consisted of four batteries of four units each. In addition, SAP was part of the fighter anti-tank artillery brigades, forming the mobile reserve, or was attached to infantry units to strengthen anti-tank defense. Usually in combat the SU-85 was accompanied by T-34 tanks, armed with 76-mm guns.
Soon after the appearance of the SU-85 on the battlefields of Hitler’s tank felt the power of the Ural machines. Krupp armor could not withstand the fire of the powerful guns. Tanks of company “Porsche” knocked out from hits not only in side, to and in the frontal armor.
In July 1944 the troops of the 1st Baltic front operated 1021 th SAP, armed SU-85. In one battle about 100 enemy tanks with machine gunners in armored personnel carriers broke through the battle formations of the Soviet infantry units and rushed to the depth of our defense. To thwart the further advance of the enemy in the rear, self-propelled artillery regiment received the assignment to make a sudden maneuver and stop the enemy tanks.
Quick March of the artillery postarano occupied and camouflaged positions. Not knowing about the presence of the artillery reserves in this place, the enemy tanks entered the defense sector of the regiment. After letting them at 500— 600 m, battery team opened fire. For a few minutes immediately broke out a few smoky, smoldering fires. Tanks backed away, trying to get out of the zone of fire, to gun new self-propelled guns followed them all the way out. Armored vehicles tried to turn, but then froze, scorching armor-piercing projectiles. Losing 19 tanks, including several heavy” and a dozen armored personnel carriers, the enemy fell back to their positions.
At the storming of the city of Asinou in the East Prussian operation, valuable support to the infantry had 1294 th SAP. A large force of German infantry supported by assault guns, launched a counterattack against Soviet units. Two batteries of the regiment concentrated fire swept away the wolf enemy infantry. The enemy tried to flank him. Quickly moving to a new firing positions, artillery opened a withering fire on the infantry and assault guns of the enemy. After destroying six of them, gunners chastened counterattacking and forced them to go on the defensive.
In one of the reports about combat operations of the 1st guards tank army stated: “Ka all stages of the battle self-propelled artillery played an important role in supporting the actions of the troops. With the rapid onset, she, together with tanks relentlessly pursued the enemy, destroying its manpower and equipment. Possessing high mobility and heavy armor equal to modern tanks, self-propelled artillery established itself as the artillery of direct support tanks and infantry. In addition, self-propelled artillery was an effective means of defense.”
And as things were leading tank designer Nazi Germany Ferdinand Porsche? After all, the advertised “tigers” and “Panthers” and “ferdinands” were burning under the blows of tanks and self-propelled guns of Soviet production! In 1943 Germany undertook an almost complete rearmament of its armored forces, but the forces for conducting offensive in 1944 still was not enough. The Germans are beginning to produce new means of dealing with Soviet tanks: the 88-mm self-propelled anti-tank gun ka basis of a medium tank T-VI “Nashorn” (“Rhino”), a 128-mm gun, “yagd tiger” on the basis of the tank “tiger”, the 88-mm gun “yagd Panther” etc.
COMPARATIVE CHARACTERISTICS OF TANKS

By the end of the war, the production of self-propelled artillery in Nazi Germany even began to outpace the production of tanks. However, despite some promising design solutions, to bring their cars to perfection, to eliminate identified during the test and a battle defects Porsche did not have time: the war is inexorably approaching the borders of the Reich. In 1944 the factories Porsche appears symbiosis: the form of the body “Panther” gun and armor “Ferdinand” (“king tiger” T-VIБ). The thickness of the sheets in the frontal part of the tank was 100-150 mm, on the sides of 80 mm; frontal turret armor was up to 180mm and was considered impenetrable. It was thought that this machine had to make a change in the course of hostilities.
Porsche was so confident in his tank that he sent to the front with the first battalion of the “Royal tigers” ferry Porsche, his son, who worked with him. In the first battle the young Porsche was killed in battle with the thirty, and in a few days was broken and the whole battalion — not without the help of efficient SU-35.
However, even if Porsche managed to establish serial production of a huge 180-ton tank “Maus” (“mouse”) that had half the frontal armor, it would not have saved the Wehrmacht. After the SU-85 on the field of battle was even more powerful SU-100, ISU-122 and ISU-152.
The fate of the three “mice”, which managed to produce the factories of Porsche, was a foregone conclusion. One of them Soviet soldiers captured at the test site in Kummersdorf, the other was taken at the door rate under the Zossen, and the third at the entrance to the Reich Chancellery in Berlin.
A. BESKURNIKOV