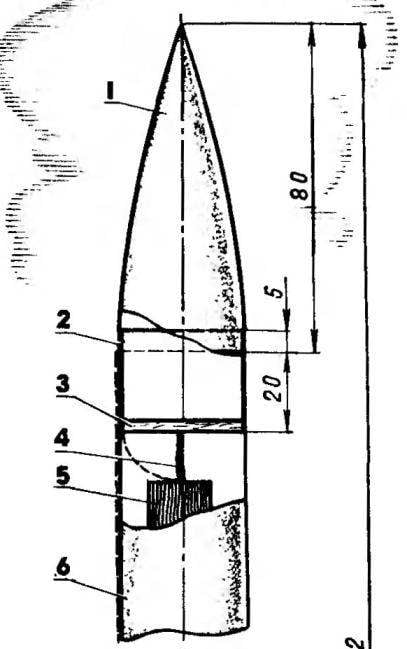 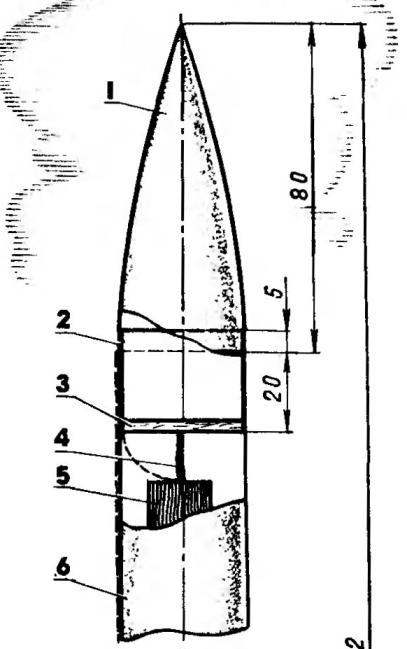 Almost ten years leading group Russian rocketmodeler-ing in the so-called sports classes is headed by an athlete from Magadan I. Shmatov. In his father’s footsteps is his son Anton. The last three years, he was the winner of the world championship among juniors, and in 1997 became the champion of Russia among adults in sports classes Ѕ6А and Ѕ4В. Today our story about the rocket with the brake band.

Design patterns Magadan athletes — a kind of “survivor” in this class. This sports equipment to the “arms” for almost a decade and brings its creators awards. I believe our readers are eager to meet him.
The body is formed of two layers of glass, of a thickness of 0.25 mm, followed by fixing in a drying Cabinet. After treatment of the hull to the tail section (engine Bay) butt on the epoxy glued three stabilizer carved from balsa veneer 0.6 mm thick and reinforced with fiberglass. Fairing — fiberglass, bottom-glued sleeve length 25 mm for connecting it with the body. The bottom part is closed by a bulkhead, wherein the fixed thread suspension brake band. Its other end was taped in the tail section of the hull to the stabilizer, but all of it is along the outside of the model.