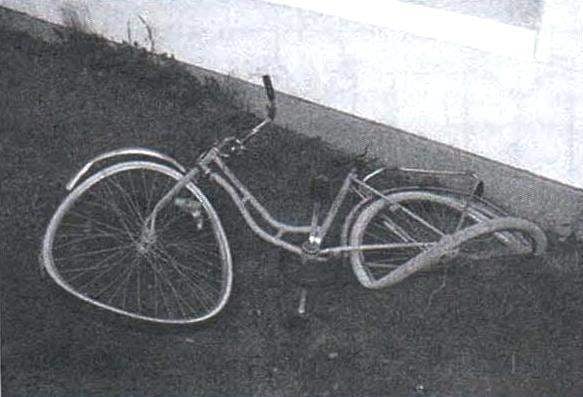 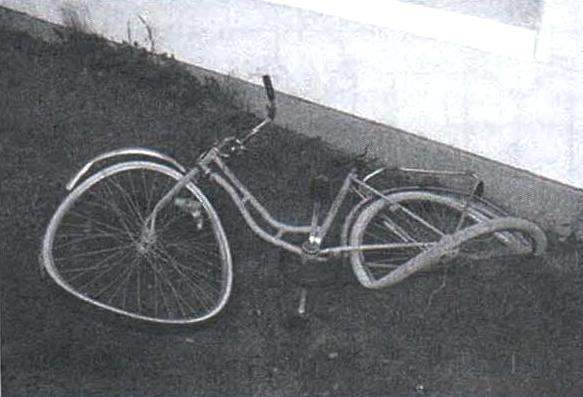 Modern models of bikes full of new materials and technologies. But in most cases it touches the chassis, steering, powertrain. Virtually unchanged in design remains only a spoked wheel: the Central steel sleeve on the axle, steel spokes, metal rim and rubber tire on it. Of course, the inventors here do not remain on the sidelines, offering, for example, various embodiments of bushings, oval and even a variable section spokes, different profiles and material (steel, aluminum, carbon fiber) rims etc, but that does not change: spoked wheel is still the lightest, and therefore irreplaceable.

The spokes interconnect the hub and rim by holding it and at the same time evenly distributing the load on the latter and passing back the shock load from the road through the bushing from the axle to the frame. For connection at one end of the knitting needle has a hook with a head, and the other rolled threads (chopped very much weakened the spokes). In addition, the spokes in the wheel are not located along the radii, and tangents to the bushings, so they mainly worked on stretching.
It is not the fact that even new wheels all spokes are tensioned properly, especially in relatively cheap models. But even if in this regard everything is fine, then after running, for sure, will have to tighten the spokes. And if the tension of the spokes is a relatively easy job, you often get into trouble and more serious, and in case of their elimination without pulling spokes will not do.
The most common damage to the wheels after punctures are “eight” – bend end of the rim (the local deviation from the plane of rotation) with a sharp obstacle or due to loosening of the spokes during long-term operation without their braces. Visually it is detected by the “wobble” of the wheel while rotating (the cycloid curve extreme points of curve view from above writes out a narrow “eight”). Often part of the rim is deflected (bent) so that it begins to contact the brake pads (or in the absence of brakes, tire -pen plugs) and prevent the rotation of the wheel.
There are several simple ways to save the wheel. The easiest to rectify received “eight” called “through the knee”. Many times I used this popular technology. 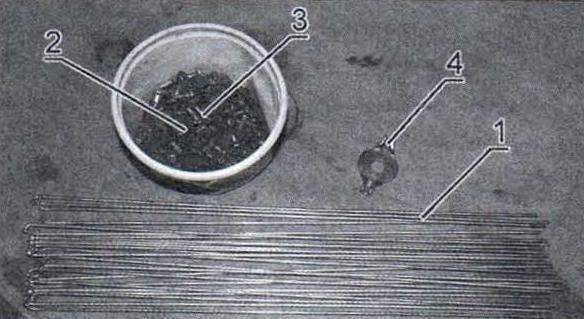 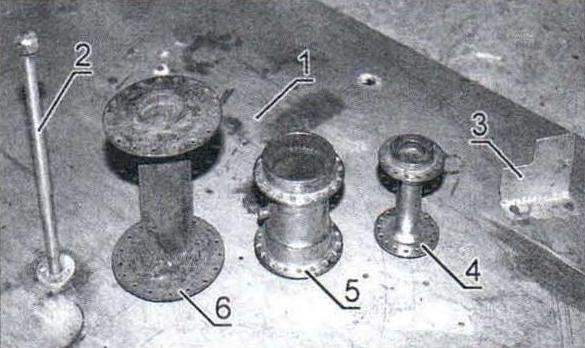 Device for straightening rims wheels and bushings:
1 – basis-stapel (particleboard or plywood); 2 – axle (steel); 3 – coordinating support (steel utolok, 4-6 pieces); 4 – bushing the front wheels; 5 – bushing rear wheel; 6 – a homemade reinforced bushing for wheel cargo truck
Flipping over the bike and setting it on the ground the butt against the steering wheel and seat, slowly roll the wheel and find the convex (rejected) place. Even better search this place with a piece of chalk: only now the wheels need to spin faster, and Mel slowly zoom from the pen of the fork (sideways) to the rim to “Teal” – the place of contact. Substitute here the knee, and with your hands grab the tire with the rim left and right and with the right effort. If I scroll again and found another bulge, then straighten again. Usually several such manipulation is sufficient to make the curvature of the rim is reduced, and the wheel is already included in the plug with a side gap, without affecting the feathers when rotating. After this repair to ride a bike is already possible, but not very pleasant: it seems that the wheel would be loose on the axis and at high speed even starts shaking the steering wheel.
To improve the group entirely (“circle”), will have to use another method – a constriction of the spokes with the account that appears the curvature of the rim. You should spin the wheel and outline the most salient point of the rim. Then loosen the outer row of two to four nearby spokes and the inner row to pull one turn of the nipple. Gradually relaxing-twisting the relevant spokes, it is possible to achieve sufficient flatness (surface) of the rim without disassembling the wheel.
After several such repairs or unsuccessful landing possible radial offset of the rim and the emergence of out-of-roundness (“eggs). 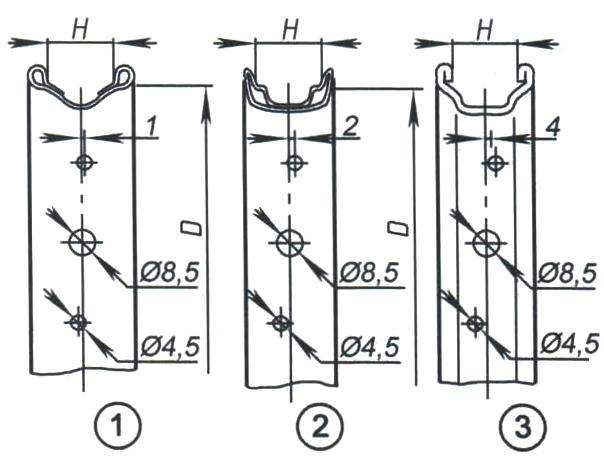 Options rims of steel tape:
1 – for tires with a wire Board; 2 – box section; 3 – without internal cavities

Deformation of the rim:
a – rim without deformation; b – “eight” (part of the rim out of the plane of rotation); the “egg” (the rim is not round – part of it is concave or convex, or both); d – “umbrella” (the middle of the rim is offset relative to the middle sleeve, this is usually the result of incorrect Assembly of the wheel) 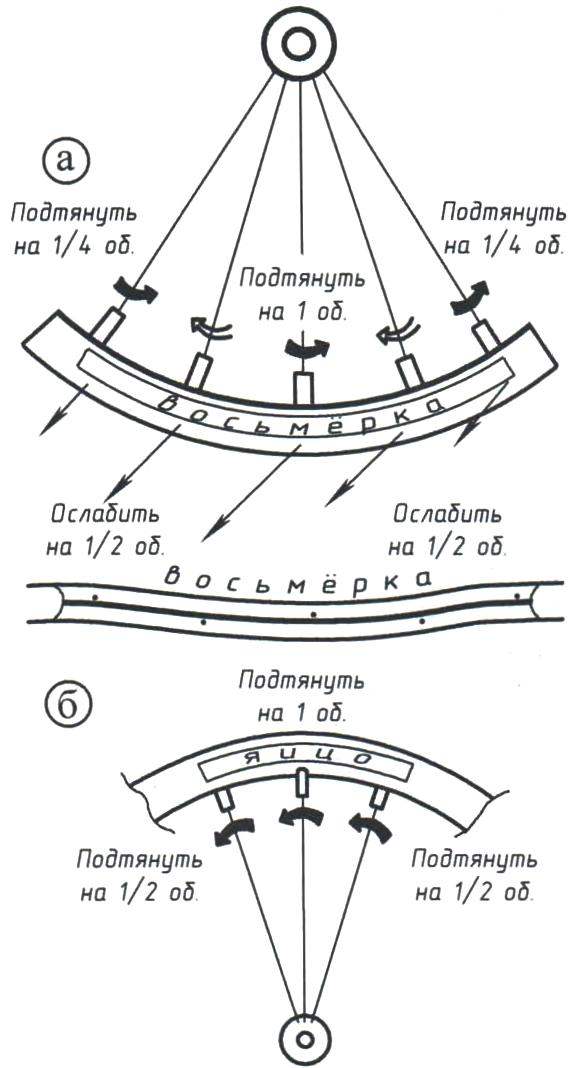 Correcting the deformation of the rim without complete disassembly of the wheel:
and – patch “g”; – elimination of the “eggs” 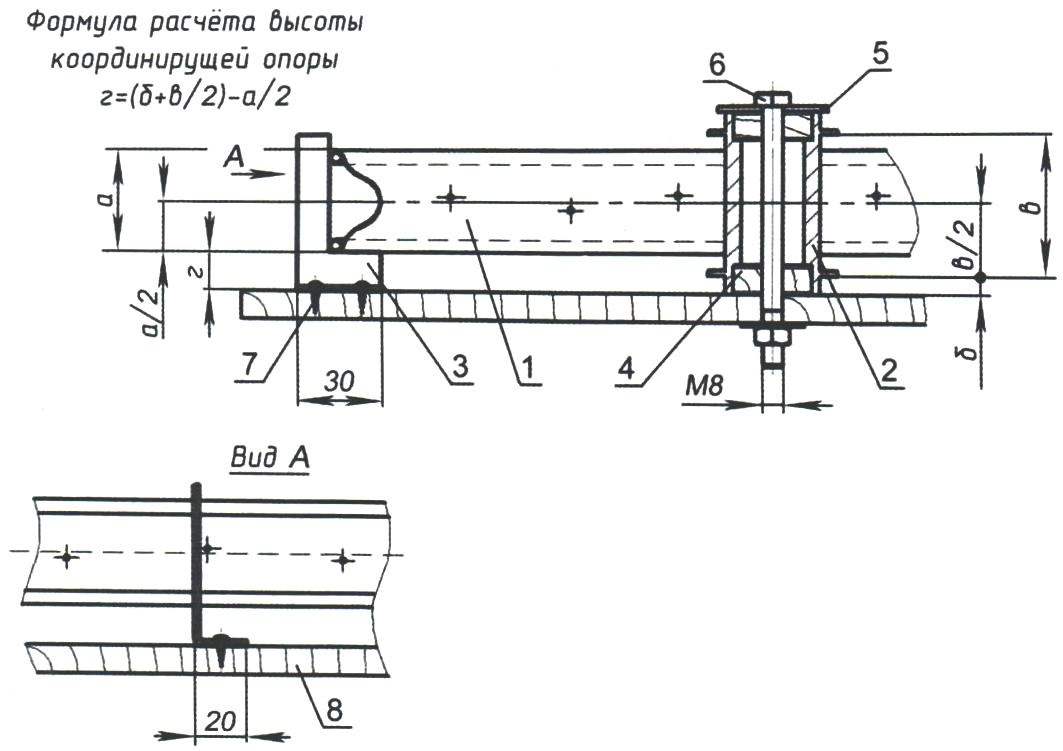 The wheel on the slipway:
1 – rim; 2 – bushing; 3 – coordinating support (4-6 pieces); 4 – centering bushing (2 PCs); 5 – wide washer; 6 – mount the wheel to the frame (the bolt M8 with nut and washer); 7 – support bracket to the frame (screw, set); 8 – stapel (particleboard or plywood)
To detect ovality bike also overturned and a piece of chalk, bringing it from the crown of the front fork with a slow scroll wheel, determine ovality. To eliminate it should poularity in the cavity and to pull in a convex place all the spokes. Then all uniformly close to normal. Still need to compress all the pairs of spokes in the left and right row, and again stretching weakened.
The end result is a substantially circular wheel.
Before the next spring-summer season should be “adjustment” wheel bare rim and, if necessary, and a more thorough straightening.
The most complex repairs of wheel – full disassembly and Assembly. On the knee such repairs to do. For the accuracy required of the Assembly fixture. A simple jig is made on a suitable sheet of plywood or wood chipboard. In the centre is drilled a hole the diameter of the wheel axle.
After full disassembly of the wheel (removing all the spokes) is straightening the rim “roundness” by fitting line rim with smooth drawn a circle on the surface of the sheet. Well repaired, the rim has to be perfectly round and flat.
In fault detection of the spokes should pay attention to the condition of the thread, corrosion-resistant coating and wear of the neck of the hook.
To facilitate the work of the threads of the spokes and of the rim in contact with the washers of the nipple (around the holes) grease grease or machine oil.
Assembly starts with filling out the spokes of the casing bushing in the “rhythm” head to the left (outside) – head to the right (from the inside). Here it is necessary to pay attention to the following: if the holes in the flanges of the bushing are countersunk on one side, the head of the spoke must be located on the opposite side of the countersink is suitable for bending spokes. Moreover, a careful examination of the sleeve it must be noted that the holes on the flanges of the sleeve by spokes are offset from each other at half pitch.
Then the sleeve with the axis is screwed into the center fixture, the spokes are distributed in four prospective series, put the bare rim.
When you dial the first nine spokes, you need to insert them in the corresponding holes of the rim (those that are offset to the flange where you inserted the needle). The needle should be screwed to the valve adjacent to the valve (or in his absence, with a hole under it). Looking ahead, I note that the finish spoke the last row must be on the other side of the valve and not to interfere with the high-end needle. Otherwise there will be difficulties when connecting to the valve on the pump hose.
Reinforced Bush spoke wheels:
1 – bearing housing 80102; 2 – body; 3 – large flange; 4 – small flange; 5 – bearing 80102; 6 – bearing 80100; 7-spoke (set); 8 – axis; 9 – nut M8; 10 – washer; 11 – frame cargo truck 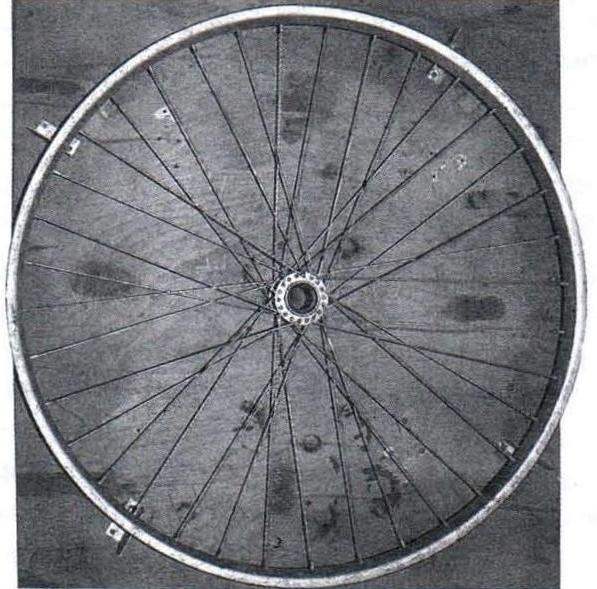 Assembled Bicycle wheel with a rim straightened on the bench
The first nailene threaded nipples should clearly define the direction and “rhythm” of Secovce wheels. For example, in the rear wheel of an ordinary adult Bicycle 36 spokes. Divide into four rows – it turns out nine spokes in a row. The first lower nagisetty through the three holes on the fourth. The second row in the opposite direction, starting from the middle of the empty hole and then into all secondary. The third row in the same direction with the second row in free during opening and next. Fourth and last top row has a direction identical to the bottom first. “Spicula” he’s in the remaining holes of the rim.
The traditional set is called pilotenkanzel when the direction of the spokes is approaching a tangent to the flange. Such a position makes the wheel more rigid with respect to torque (and braking). Most wheels are going in three “cross” (but can be two or four, and even five). This means that each spoke crosses three others, coming from the same flange.
It remains only to uniformly tighten all the spokes. This should be done piecemeal, and not in a hurry. If the ends of the spokes protrude from the nipples inside the rim, they must be sawed.
The prepared wheel is removed from the fixture and placed in a fork of a Bicycle.
Now, if you broke the rim (and this, unfortunately, happens), or worn bushing, feel free to buy a new one, disassemble the wheel and replace.
It is possible to replace the regular wheel hub rim “non-native”. Then perhaps the discrepancy between the number of holes for the spokes from the rim and sleeve. Not scary. Just will have fewer spokes and a little stray RITM “spitsevka”. The safety margin is usually enough.
There are cases of design technology with a Bicycle wheels when required strengthening sleeve or rim (or both). Then machined a new expanded sleeve. Flanges for mounting of the spokes also increase in diameter – it is possible to estimate, having donned the usual rim regular needle or drawing a simple drawing. Truck wheel with extended hub and on usual ball bearings (not normally, without clips) will be more reliable and last longer. Similar wheels are used in the manufacture of exotic eco-vehicles such as pedal cars and rickshaws.
In the case of large bushings in combination with a rim of small diameter, use a smaller number of “crosses” (not more than two) to avoid bending of the spokes at the nipple.
Motorcycle and moped wheels designed like that because both are “derived” from a bike, only with the engine. And therefore repair them is identical.
Also with the help of a simple conductor and a welding machine can be made highly durable wheel, preveiw instead of standard spokes strip metal or thicker steel wire (rod). In the latter case, use a set of radial spokes (the shortest distance from the flange to the rim, without crosses). In this case the spokes do not cross.
A. TRENEV, Zavodoukovsk, Tyumen region.