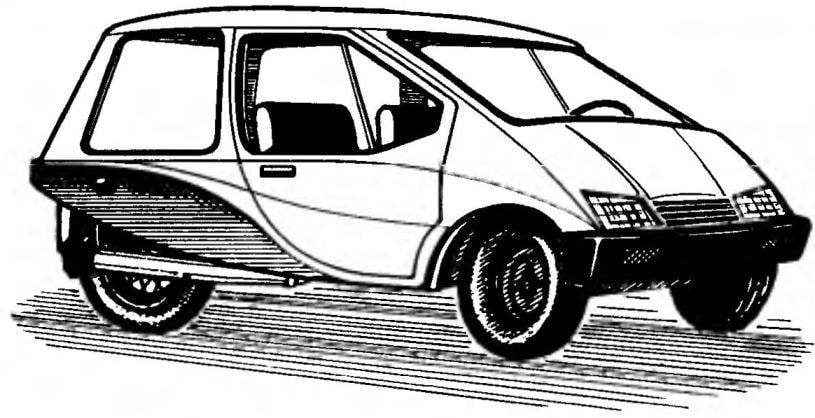 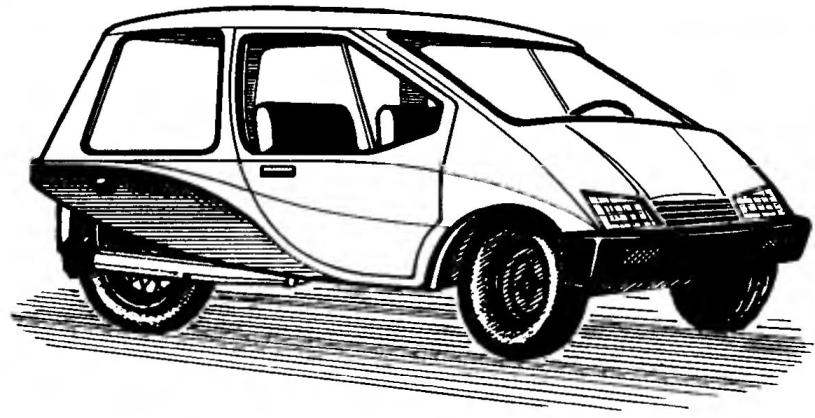 Usually mention the proverbial fifth wheel. However, some automakers use a formula, reflected in the name of our material. They really believe the fourth wheel in the car superfluous. Judge for yourself: unlike a four-legged three-legged stool on an uneven base does not wobble (remember school: three points can be spend a plane, and thus only one). Therefore, trehalose frame will be more rigid and the car will be more lightweight and durable (and hence cheaper).

Of course, trehalase have less cornering stability compared to traditional four-wheeled vehicles, however, this is unlikely to be a cause of rejection of this arrangement. Then, following this principle, we would need a long time to abandon the three-wheeled motorcycle with a sidecar. However, these machines are popular in all countries of the world and not have more accidents compared to chetyrehkantnomu.
Needless to say that the advantages of tricycles attracted designers since the birth of the car industry. After the first foot crew Kulibina, the first steam carriage cugnot and the first petrol car was a Benz three-Wheeler. Three wheels have equipped their cars with the designers of such famous companies as BMW, “Messer-Schmidt”, “Zundapp”, “Heinkel” and many others. In European cities you can find a lot of light three-wheeled trucks, and in the cities of Asia, even three-wheeled taxi. Recently has contributed to the creation of tricycles, and the famous firm “Mercedes”, which showed at the IAA 1997 in Frankfurt unusual car called’s the Mercedes F300 Life-Jet.
Tricycle “Mercedes” is so unusual that probably makes sense to tell more about this machine. The main thing about her is that her design with enhanced stability in curves, can become a tempting template to create homemade tricycles. 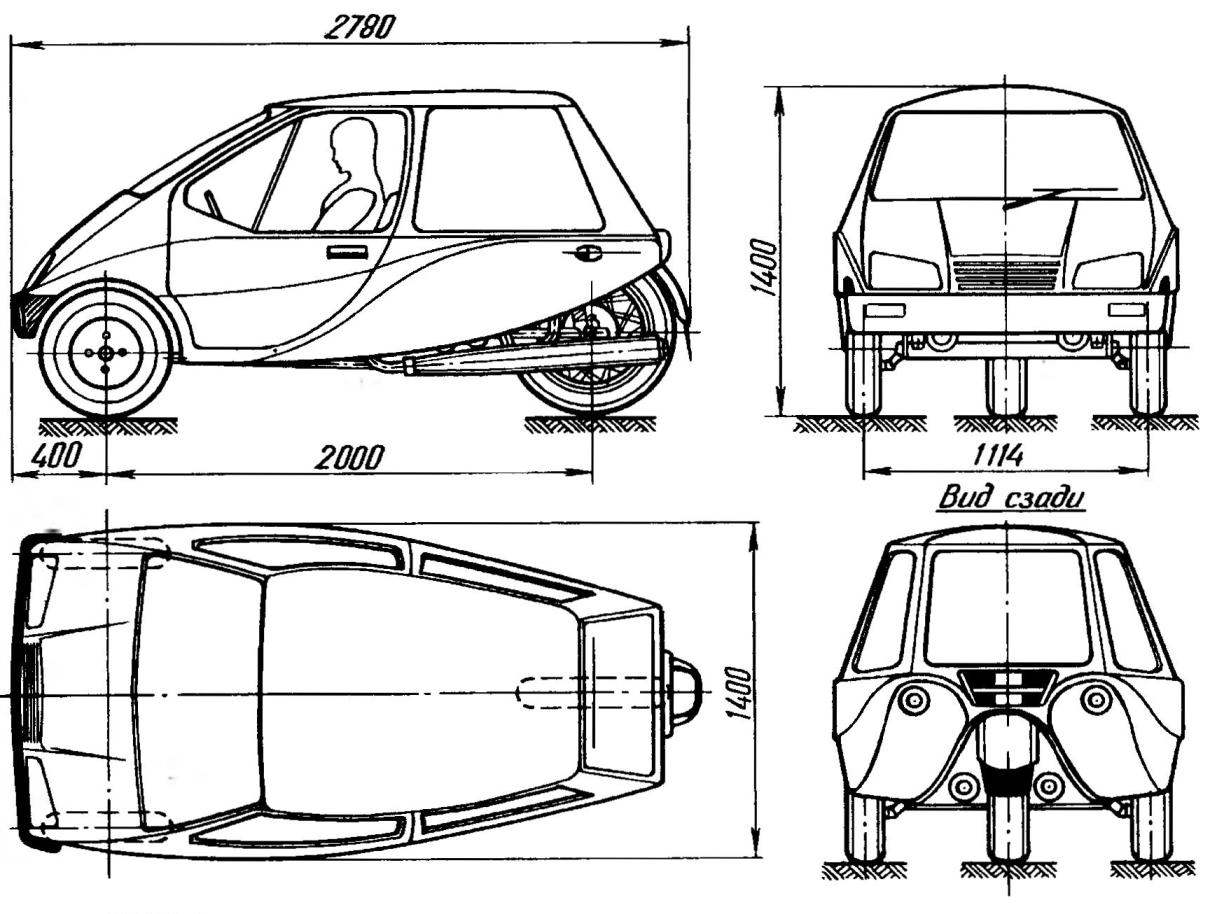 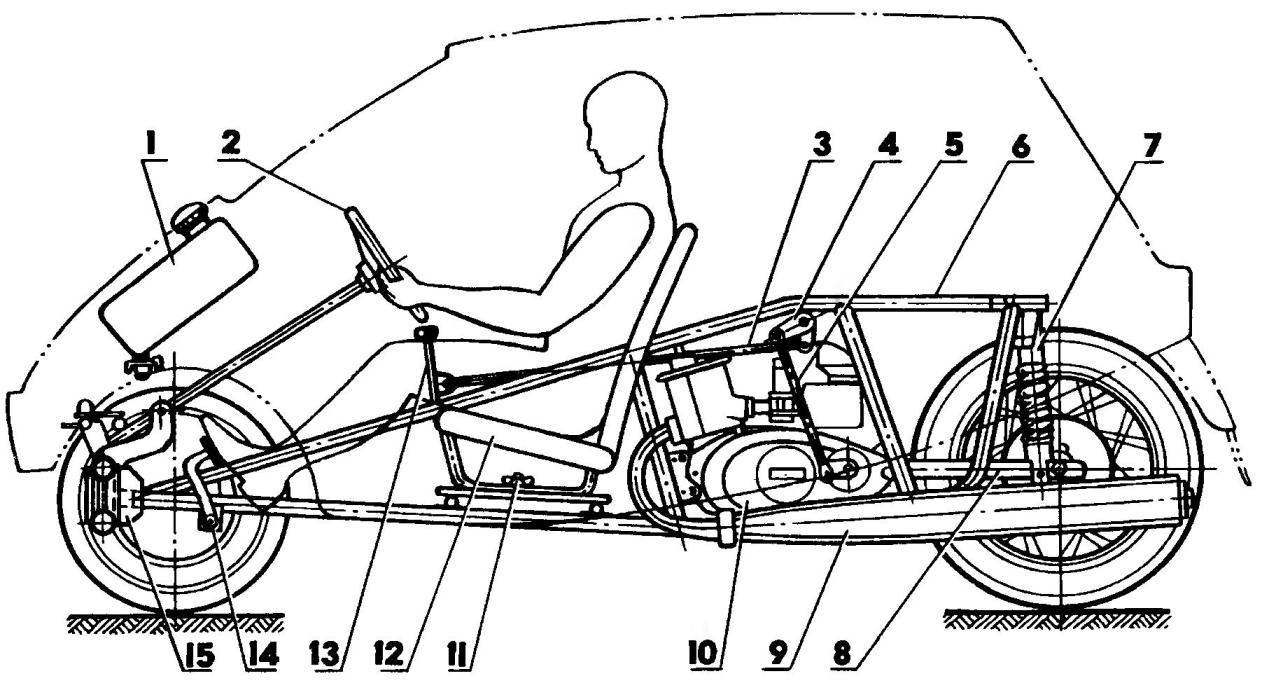 The layout of the tricycle:
1 — fuel tank (aluminum canister with a capacity of 10 liters); 2 — wheel steering with rack and pinion steering (FDD); 3,5 — thrust transmission control; 4 — lever duplici; 6 — tubular frame of the tricycle; 7 — shock absorber suspension rear wheel; 8 — the pendulum suspension of a back sprocket; 9 — the muffler with the exhaust pipe; 10 — engine IZH-Ju-5 with jacket cooling liquid; 11 — clamp the adjusting device for the seat; 12 — chair; 13 — handle shifter; The 14—block pedals a tricycle (clutch-brake-GAZ); 15 — front axle (from the FDD).
The basic idea of this machine is to give a person that feeling of freedom and enjoyment of movement, when operating a motorcycle. And at the same time to provide the level of comfort and safety characteristic of the car.
TECHNICAL
FEATURES
TRICYCLE
“Triada-350”
Base, mm…..,. 2000
Track, mm……….1114
Road
clearance, mm………. .180
Overall dimensions, mm:
length.————— 2780
width……….. 1400
height……………. 400
The number of seats…… …. .2
The engine type… IZH-Ju-5
The power of the engine.l.with……..23
Fuel consumption, l/100 km… .7,5
Tank capacity, l ………. 10
The maximum speed, km/h 90..
Representatives of the firm “Daimler-Benz” argue that the decisive factor for the organization of serial production of the tricycle will be the reaction of the audience; if Life-Jet like her to expand production of the car will be for another year.
However, back to a more simple tricycles to those that were created in our country, Amateur automakers. Among them — Kharkov V. Taranukha, from Kiev, Eduard Rudyk, Muscovites G. Malinowski and E. Molchanov and many others. I must say that the designers and testers of the tricycles were given the most favorable reviews of these machines. Of course, management trehalase different from the management of traditional cars (though not more so than driving a motorcycle with a sidecar).
This is another three-wheeled car, dubbed the “Triad-350”. This is a double two-door tricycle Deluxe with two-cylinder engine IZH-Ju-5 liquid-cooled with a working volume of 350 cm3 and a power of about 23 HP
The tricycle has a spatial tubular frame and body with tubular frame mixed construction (plywood, foam, fiberglass plus epoxy resin).
The rear part of the chassis of the car is made like a motorcycle IZH-Yu-5 — suspension fork, the regular “Izhevsk” spring-hydraulic shock absorbers and a chain drive from the engine to the rear wheel. Front axle — from FDD sidecar with torsion suspension, hydraulic shock absorbers and wheels. From these same rack and pinion with steering shaft and wheel.
The appearance of the front of the body is largely determined by the shape of the windshield. The Triads used rear window VAZ-2108 (Tavriya or M-2141) together with part of the rear door. Side and rear window cut out of Plexiglas with a thickness of 4 mm. With careful treatment and regular processing cosmetics acrylic long lasting clarity.
Welding frame of the car was made on the stocks — painted white latex paint the sheet of chipboard the correct size. On it were drawn the planned projection of the frame and nailed the pieces of wood for fixing the tubular elements of the frame. We also used simple clamps and screws, as well as a soft binding wire.
Prepared for the Assembly of tubular elements of the frame are mutually adjusted and temporarily docked, for which they were drilled holes, in which skipped the binding wire. Thus prepared tubes were connected to two or three welding points; after a thorough check on the symmetry of the joints were welded completely. Moreover, the symmetrical elements of the frame are cooked in small patches at a time — this allowed us to avoid difficult thermal design leash.
In a homemade car, even the smallest, most complex part of the body, especially a carrier. There are many variants of the design of complex spatial node: the body of fiberglass, glued on the boob or in the matrix, sheet metal, plywood or hardboard collected on a wooden or metal frame, and also fragments of bodies of production vehicles using improvised metal parts.
However the body Triad falls out of this list — he has a light tubular frame with a fixed window frames. This was intended not so much for strength design, but for shaping. The shell was formed by means mounted on the frame of light plywood frames, the space between which was filled with sections of foam construction. Next, the surface of the foam was adjusted to 20 mm thickness, lined and papered two or three layers of fiberglass cloth on the epoxy binder outside and one layer inside. The salon upholstery artificial leather. The result is a tubular frame as if drowned in the thickness of the foam and upholstery. Turned out light and durable body.
It should be noted that doors, each of which has its own tubular frame, formed integral with the body and were separated only after pasting the surface with fiberglass. Glazing doors made of Plexiglas, a window — sliding sector.
The floor of the truck is made of plywood 10 mm thick, covered with several layers of hot linseed oil and painted with minium.
The body Triad has a Luggage compartment behind the driver, above the rear wheel.
The body is fixed on the front part of the frame hinge and a rear Luggage partition rests on the frame and fixed a couple wing nuts. This mounting method gives a convenient access to the engine in its maintenance — you only need to lift the rear part of the body and propping up a folding stand.
The pedals control the vehicle are mounted in the cabin, on an axis fixed in the side members of the frame. The actuator of the clutch and throttle carb cable. Brakes — hydraulic. With the brake mechanisms of the front wheels with no difficulties arise — they are based on regular nodes of the brake system sidecar FDD. Drive the same brake pads rear-wheel converted from mechanical to hydraulic working brake cylinders from the sidecar. 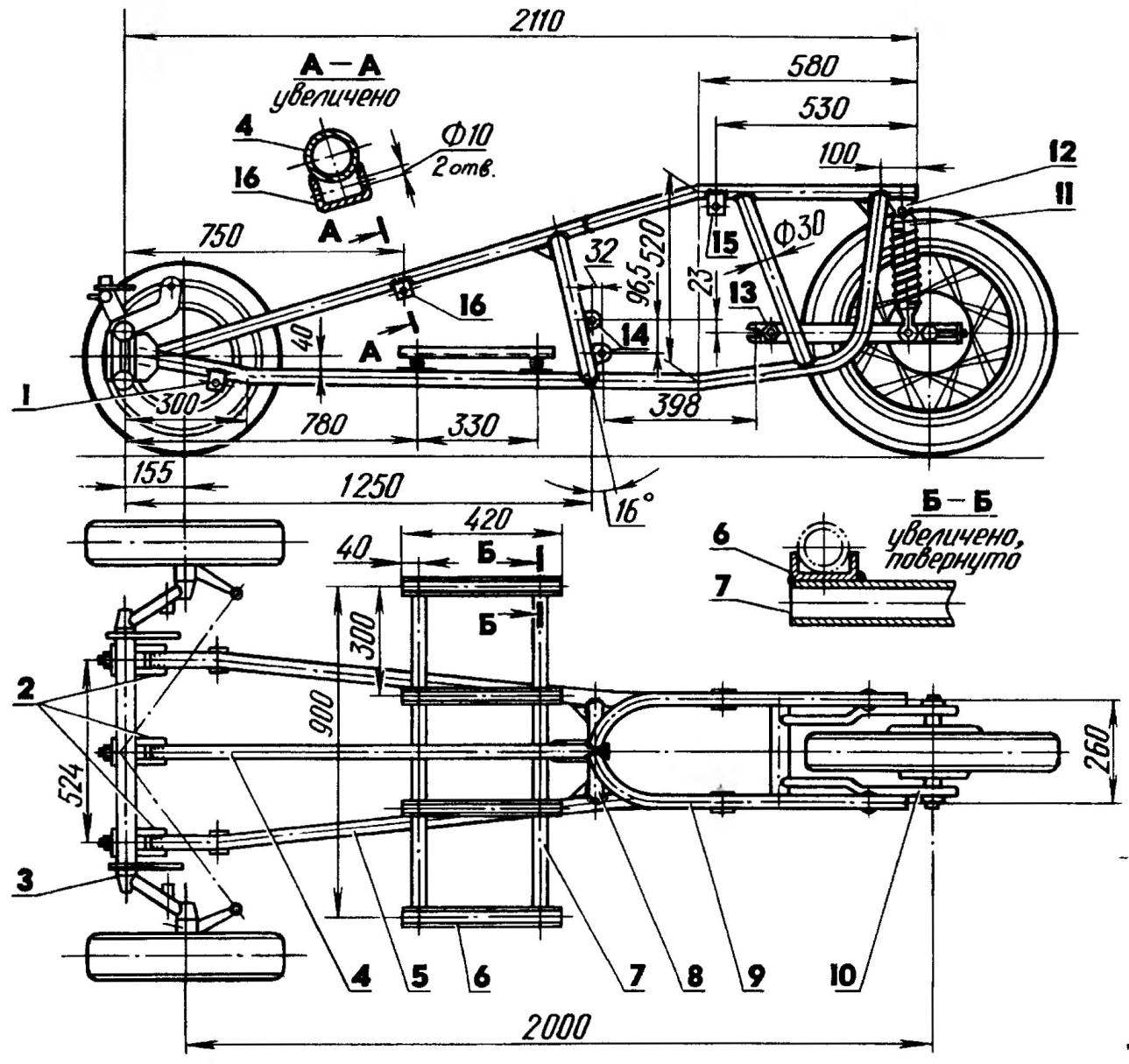 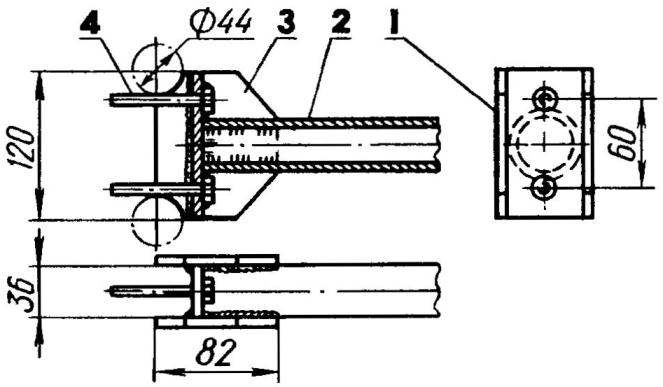 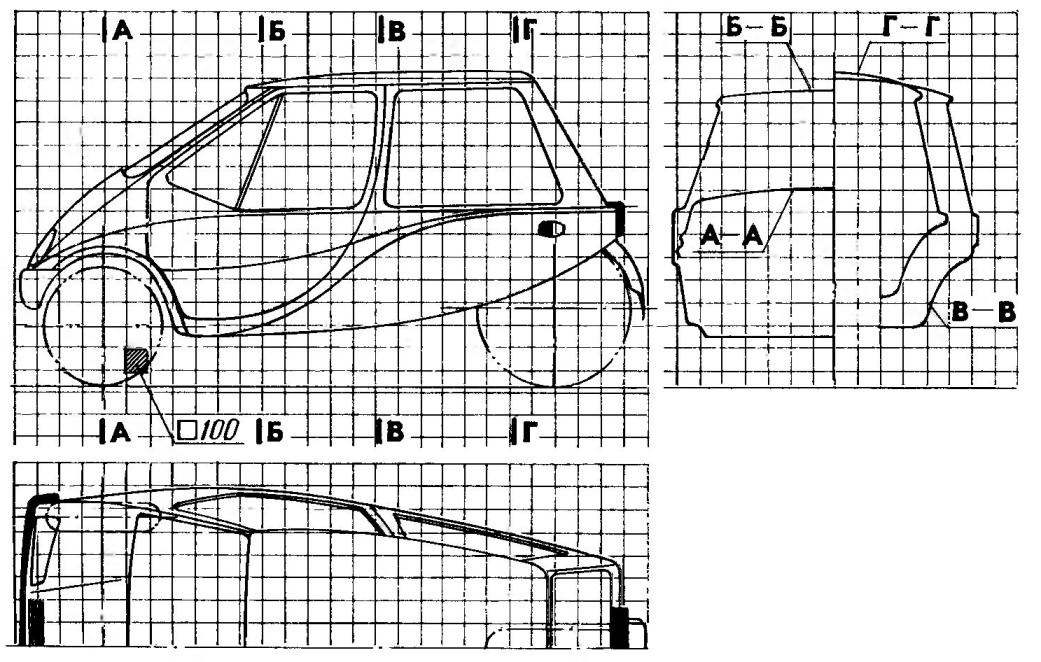 The body of the tricycle. 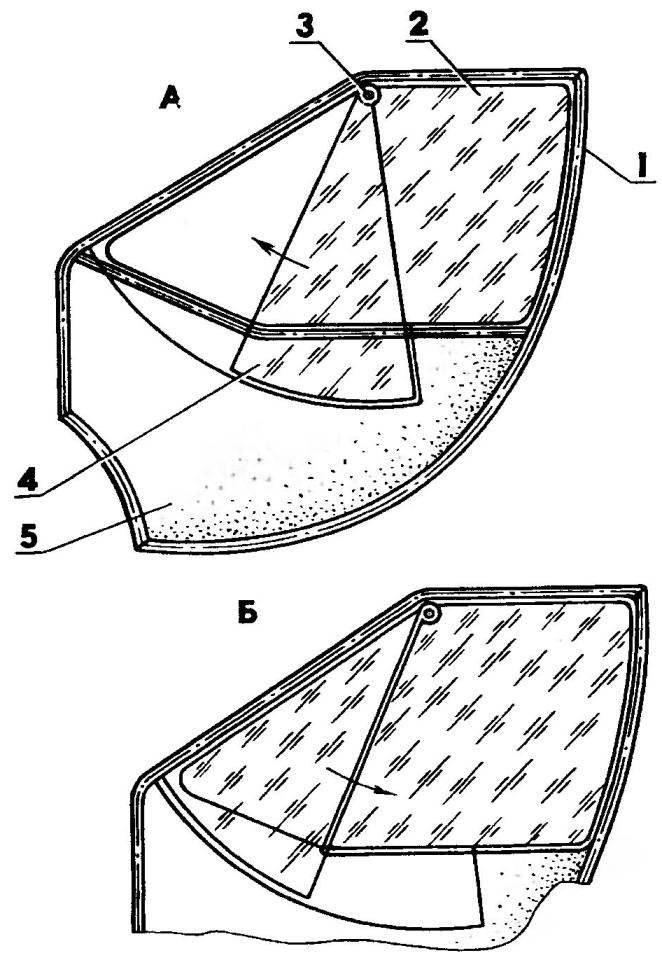 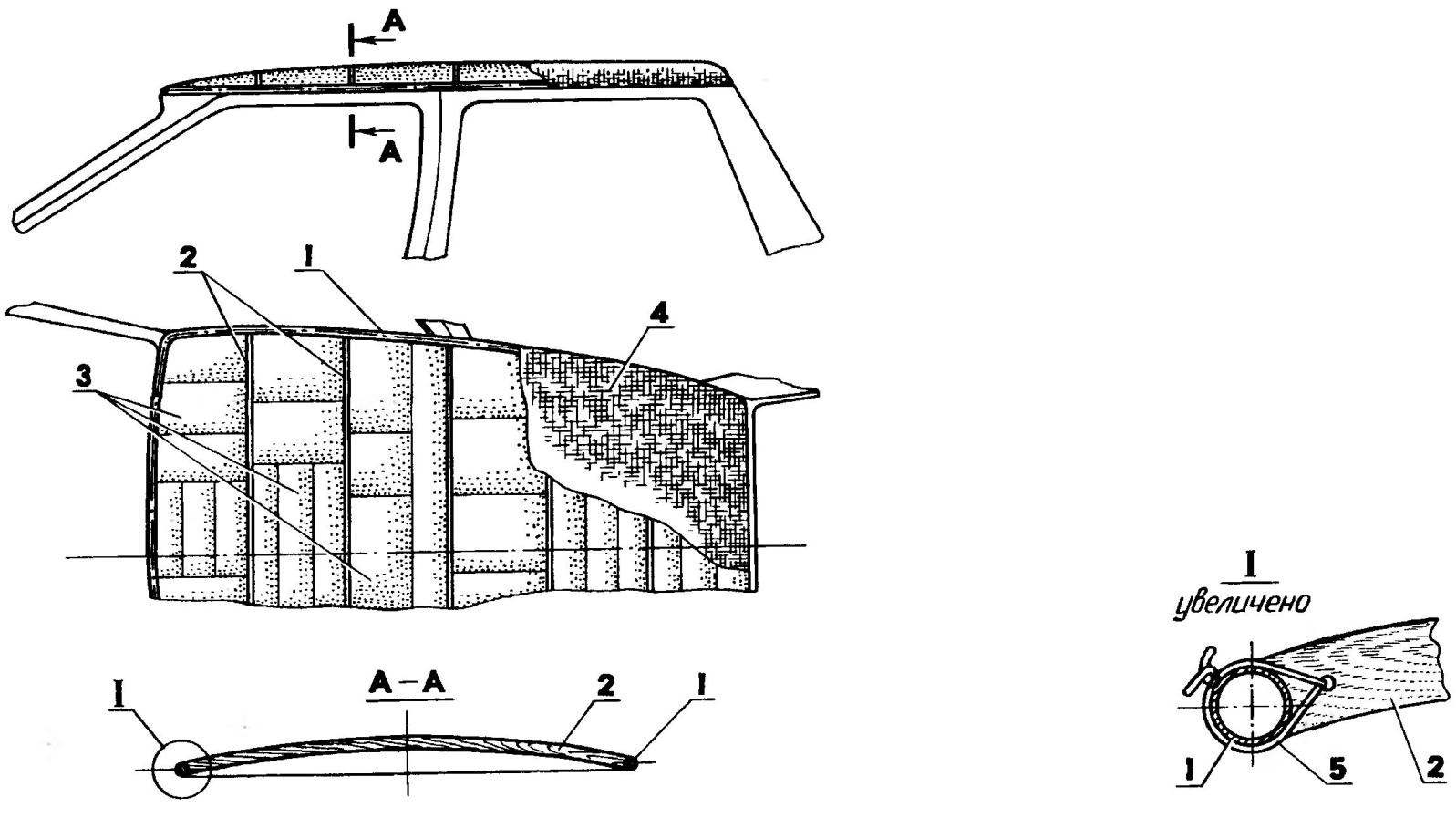 Forming the body of the tricycle (the example of the manufacture of the roof):
1 — frame (steel tube 12×2 or 16×2); 2 — frames (plywood s10 or s12); 3 — filling (foam); 4 — coating (fiberglass in epoxy binder); 5 — wire (removed after gluing the foam padding).
Arm transmission mounted to the right of the driver’s seat on the Central strut of the frame. With the lever on the shift shaft it is connected by two rigid tubular rods through the intermediate duplici the lever. The first gear is engaged moving the lever forward from neutral, second, third and fourth sequential movement of the lever from neutral ago.
The motor “Triad” starts with the handle mounted under the dash to the right of the driver and connected with nylon rope drum mounted on the starting motor shaft instead of the shift lever. On the drum is wound three turns of rope.
Steering is no different from what works for FDD. The only novelty outdated regular steering wheel is replaced by a so-called sports steering wheel of smaller diameter.
As already mentioned, the “Triad” — a motorcycle engine with liquid cooling. At the time, the appearance of these engines breathed a new spirit in Amateur automotive, giving homebrew is not only powerful and reliable but also stable power unit. The radiator of the cooling system of the engine, “Triad” is set to the front of the machine in the tunnel, riveted sheet aluminium. There is an electric fan (from “the Zhiguli” heater) and fold-deflector to guide the air flow in the cabin, and outside, under the floor of the cab.
Fuel tank tricycle is made of 10-litre aluminium cans, in which is embedded a standard motorcycle fuel cock suck. Tank is fixed on the front of the machine. The fuel supply tank by gravity.
Driving a three-wheeled machine special difficulties does not cause. One thing to once and for all to determine is the value of the optimal speed when cornering. This can be done on free paved area. Turning, we should try to bring the car to the disengagement of the front wheel and even drive on two — one front and rear wheels (by the way, teach driving on motorcycles with sidecar). It is important to fix in the consciousness a feeling of the raised wheel — this will help to determine the speed when passing a specific turn. Otherwise, driving a three-wheeled machine is no different from four.
I. ZHUKOV,
engineer