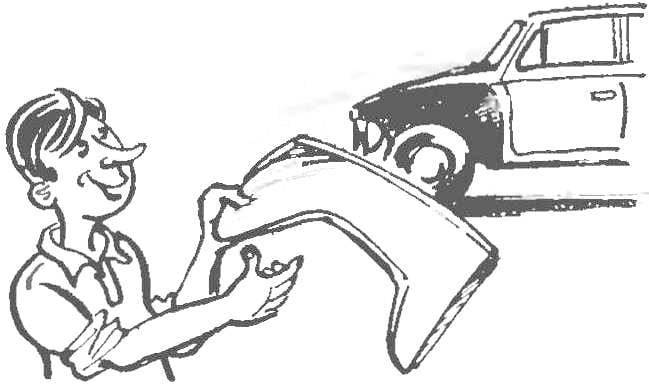 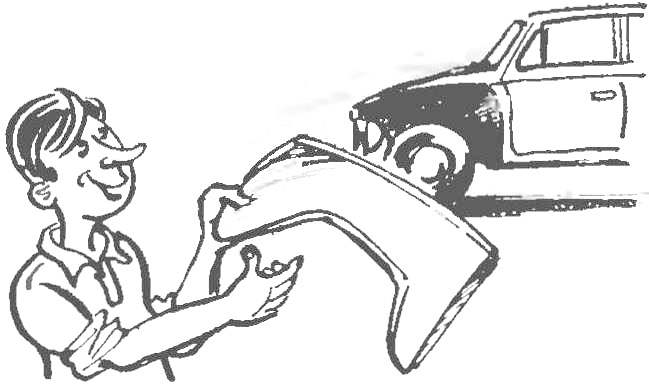 It is known that the car repair the most common and time-consuming are body work. This files most often have purely mednitskii techniques, aligning mutilated steel shell with mallets, rubber or polyurethane hammer and finishing operations carrying out with soldering tin or lead. I can say that I have long abandoned this technology in favor of proven on dozens of dents and holes technology using epoxy resin, filler and fiberglass.
First of all, the wing (as well as any other element of the shell of the machine) raduetsa and while oats do not have to bring its outer surface to the ideal state. Importantly, there was no metal protruding beyond the surface that needs to happen as a result of the repair. On the contrary — in many cases, the surface is better deliberately to understate in order to it is possible was to cast epoxy-glass cloth patch tangible thickness.
If the wing has not only dented, but torn or rusted through places, then it does not matter. It is only necessary to cut the corroded and carefully clean the rusted areas. In this case I recommend using rust Converter and steel brush.
I have not once had to hear from the drivers talk about the fact that under the “epoxy” metal active rust. Indeed, many have observed this effect, but the blame does not “epoxy”, and the ignorance of the technology of work with this material.
To ensure good contact of the epoxy binder is an epoxy putty or a proper epoxy in combination with fiberglass — it is necessary to adhere to the following technology. For the beginning part of the metal shell to be repaired, thoroughly cleaned of old paint and soil, is treated with rust Converter, and then to Shine grinded with sandpaper or abrasive wheels of Durex.
Immediately, within a few minutes after Stripping, the surface is coated with a composition of an epoxy resin entered into the hardener (the usual ratio is from 1:8 to 1:10, although some types of epoxy resins diluted in other ratios of resin and hardener, so before work will Refine the method of preparation according to the label or label not the box) with the addition of acetone or solvent No. 646— to the density of conventional medium. After applying the solvent or acetone evaporate, and on the surface of the metal remains film from a relatively slowly polymerizing resin protects the metal from oxidation.
No need to wait until the resin finally polymerized. Almost immediately you can begin to incorporate irregularities IPI holes. Of course, it is better to prepare glass cloth patches and some resin. Not suggest to dissolve the resin for the total volume of work — better to do it in batches of 100…200 ml in large volumes “epoxy” are prone to self heating and spontaneous polymerization. And even if the work is long, place a container with the prepared resin in a bowl of ice or snow — this will delay the polymerization for a few hours. 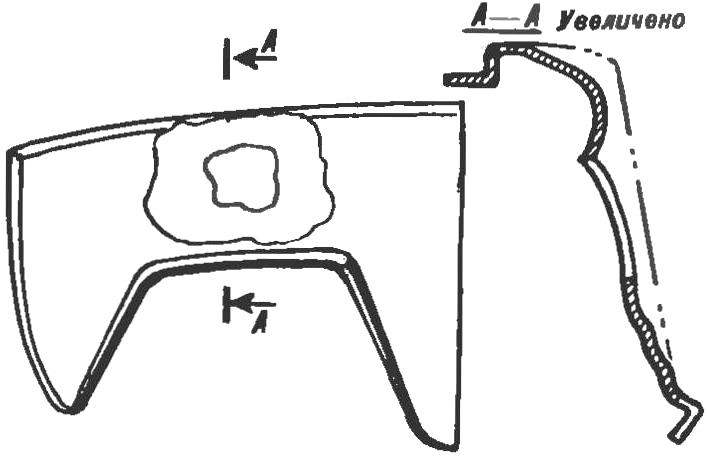 A typical dent in the side of the car.
Repair begins with the restored place is greased with resin (this time regular, non-acetone), and then superimposed flap fiberglass, and he is on top again is coated with a resin. For application of the resin it is best to use a hard brush. 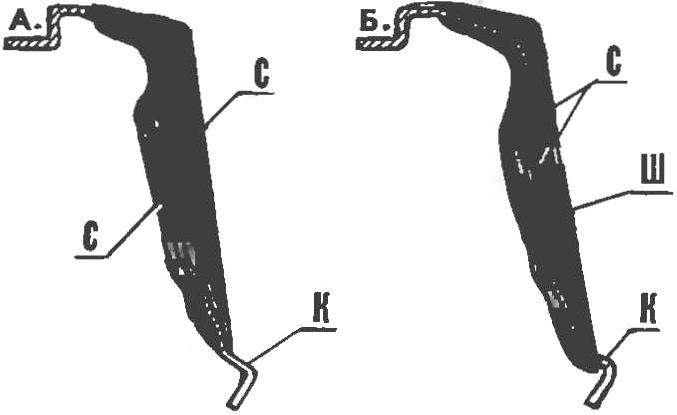 Restoration of a covering with fiberglass and epoxy or epoxy putty:
And — with the help of resin and fiberglass, B — using fiberglass and epoxy putty. Letters in the picture indicate: K — wing, C — fiberglass, W — putty.
Then you can act in two ways. The first is filling out the dents with pieces of the same fiberglass with the resin to cover until the layer thickness will not be brought before the circuit (or rather slightly exceed it), which must be obtained after the repair. And the second is applied over the first layer of fiberglass epoxy putty consisting of epoxy and filler dust of any is tooth-powder, talc, cement, etc. After applying putty, (the criterion is still the same — layer needs only a little to speak on the future of the contour of the surface that it is easy to control a flexible rail or a pre-cut of plywood in the mold) surface is sealed with another piece of fiberglass. If it had gaps, it makes sense from the inside also glued a few layers of fiberglass in order to obtain a kind of lock preventing the exfoliation Zapata. 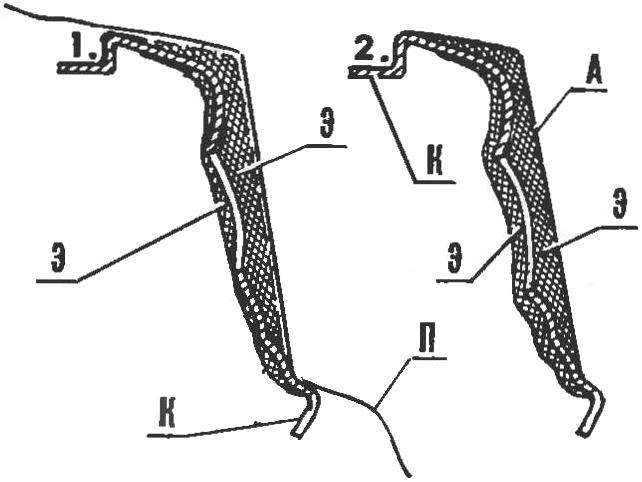 Lapping the surface with plastic film:
1 — preferowane film and smoothing of the surface with trowel and hands, 2 — ready restored wing. The letters in the picture shown: e — epoxy composition (fiberglass or fiberglass combined with epoxy) To the wing And the final wing surface, P — plastic film.
Next, and for the first and for the second method it is possible to recommend the following finishing operation. On top of the epoxy composition immediately superimposed plastic film, after which the still plastic epoxy putty or preferovany to metal fiberglass should be carefully flattened in accordance with the shape of the wing or other part of the shell of the machine. You can use a piece of laminate IPI sheet metal (press them sapatu), spatula-trowel rubber and just hands — preferably in cloth gloves. Excess resin can easily be extruded and retracted in the polymerization process. If you are not “perebuhal” hardener, you will have at least a couple of hours, in order to bring the surface under the film to perfection.
In conclusion, the film is stretched over the surface of the repaired parts of the body and secured with duct tape or vinyl tape. The next day, polyethylene protective film easily separates from the surface of the resin — and you’ll be glossy like polished surface, practically does not require any additional processing.
S. EVSTRATOV, engineer