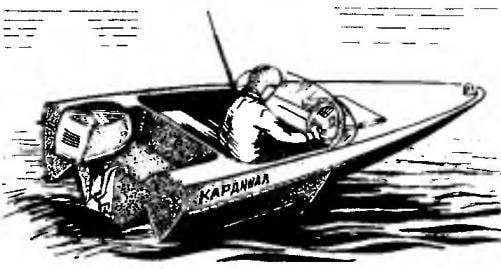 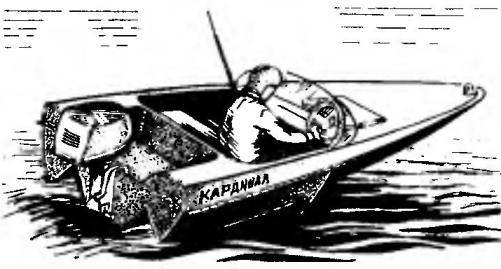 In Soviet times collective farm and state farm meadows often held cultural pastures on which was mounted a water system.
With the collapse of the nearest to us of the farm sprinklers on this meadow had deteriorated. And dural tube from it up to ø 250 mm and length up to 12.5 m and left lying in the grass.
Many have adapted these pipes for casing of water wells, chimneys (they look good in the “ensemble” with galvanized roofs), and even fences do not rot and does not corrode. 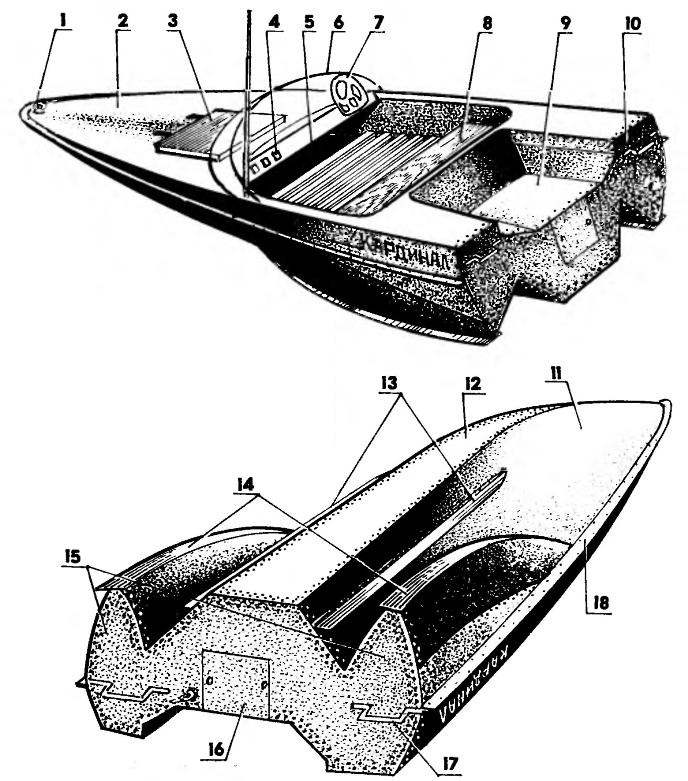 The theoretical drawing of the hull 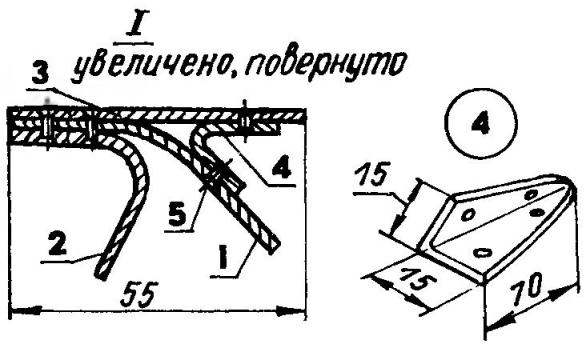 Scheme of joints:
1 — the outer side of the sponson; 2 — inner side of the sponson: 3 — rails; 4 — area of rigidity; 5 — rivet
My friend, a mechanic, a nugget, thought to use them as material for building boats.
We were removed from the tubes Packed soil and cut them along in the circular saw mill. As far as he could, squared her cut pipe special devices — crowbars with claws, then cleaned and threshed with hammers and sledgehammers in the sand, and then with thick rubber, getting the leaves flat or with the desired curvature of the surface. The thickness of the base material (pipe wall) is from 2 to 3 mm. the Sheets harder allowed on the bottom and the deck, the softer — side and side nedelki.
I myself riveted to whip up a flat-bottomed boat — “ski” with a width of 1 m, and Then made for his cousin another boat, then a catamaran, but it was too heavy and unwieldy.
Finally got access to the past his boat — “the Cardinal”.
Designed and made it with the expectation that someday will put on her water-jet engine, parts for which have slowly sharpen.
The hull is riveted with the contours “politikorange” type, has a rear two side nedelki (sponsons) with their fins.
Stern transom. On the transom is installed outboard motor. On the poop deck is made with a recess for a future jet engine. In the bow of the deck mounted hatch. Through it in the hold stacked empty plastic bottles for higher-
tion of buoyancy of the boat and necessary equipment.
The driver’s seat and the passenger equipped cockpit in Wed-DIN-tion of the boat. Fenced front cockpit windshield orange. The front panel contains all the instruments.
The deadrise of the hull in the front and sponsons, a variable in the back — is a constant 90°.
To the sides of the hull in its underwater part at a height of 50 mm from “skiing” riveted on both sides of the aluminum strip, the longitudinal planing steps. The same strip riveted along the perimeter of the boat except the transom, is brisgau-boynik and to the keels of the sponsons — slider.
Overlapping sheets of aluminum to ground all of the joints is 35 mm.
Rivets with a diameter of 5 mm in the underwater part of the hull with countersunk head, in other places—round. They are located in two rows (a distance of 15 mm between rows) in chessboard order with step of 20 mm. Such connection of the sheets are not demanded even of sealing joints.
Once, 25 years ago, the same technology I was riveted from stainless steel sheets four barrels for pickles. The seams are still tight, and the barrels do not leak!
Steering wheel bent from a thin-walled steel pipe, spokes cut from steel sheet of thickness 1 mm. All neatly welded to “zero” and painted.
The result is a boat with a duralumin hull-plating was not that heavy, but its advantages in front of a wooden obvious: high strength, durability, easy cleaning, no power set.
The running of the boat exceeded all my expectations. Under the motor “Moscow 30” even at full “gas” from the boat to the “buck” does not arise. At a cruising speed of slips on the heel of the ski and on the slider within the length of 350-400 mm (with one driver). When sharp you reset the “gas” boat gradually settles in the water even without waves.
Vladimir PRONIN, the city of Krasnoslobodsk, Mordovia