For anybody not a secret that such popular transport motonarty little when you need to go s journey through new-fallen loose snow. “How to reduce the specific pressure ka soil, retaining the basic thrust performance?” — with such question has addressed to the editorial office equipment the snowmobile enthusiasts from the city of Zlatoust, Chelyabinsk region, and a number of other readers.
But one of the solutions to the problem were found of the talented Soviet designer S. S. Nezhdanovskoe in 10 years. Unfortunately, in our days developed diagram of a snowmobile is known to very few.
And yet what is rational, never completely disappears. Proof of that is created by an Amateur designer Jevgenijs Miroshina from the Krasnoyarsk region of motonarty based from ka 12 (!) ski. The author didn’t know about the testing machines such schemes to pile design have come on their own. So, today, a small digression into history, to the origins of the undeservedly forgotten ideas and the story of the original modern snowmobile.
It is difficult to overestimate the importance of snowmobile technology for the development of the far North and Siberia. Only motonarty Yes, the snowmobile is able to move confidently through the vast expanses, where even the winter is a rarity. The main advantage of snowmobiles is the ability to use wide skis with a large area of contact. Low specific ground pressure allows the machine to move even in loose snow. Their main drawback — high fuel consumption due to the use as a propulsion propeller. Motonarty when moving through dense soil is more economical, however, when going on loose snow, this advantage is lost. And here the question arises: is it possible both these schemes unite with one vehicle, which would have the positive qualities of both! It turns out that the answer to this question has long been known. Early in the century he was found talented engineer-inventor C. C. Tender danowski.
In the first decade of the twentieth century, when there was a light and fairly powerful internal combustion engines, there are preconditions for creation of new vehicle types and purposes, including the ability to navigate in the snow. B those years at the initiative of Professor N. Zhukovsky, near Moscow, in Kuchine was built laboratory equipped with an incredible building — wind tunnel. Around N. Ye rallied engineers, designers and enthusiasts of the new science of aerodynamics. Among them were S. S. Nezhdanovskoe.
In the winter of 1903/04 year under the leadership of N. Ye was built a sled for the testing of propellers. Active participation in this work was adopted and Nezhdanovskoe. The results of the experiment affected encouraging: the machine is moved through the snow, breaking drifts nametennym. Thus was born the world’s first snowmobile.
During the tests Nezhdanovskoe drew attention to the fact that the speed of the pilot mechanism is drastically varied depending on the snow condition, air temperature and other external conditions. Expressing your observations I. E. Zhukovsky, he, together with V. P. Vetchinkin began to study the process of sliding of runners on snow. In the end, managed to bring a number of formulas for determining the variation of the resistance movement on snow load and centre of gravity. These findings allowed to determine the optimal dimensions and parameters of the reference skis, and data is soon found wide application in the design of the snowmobile. 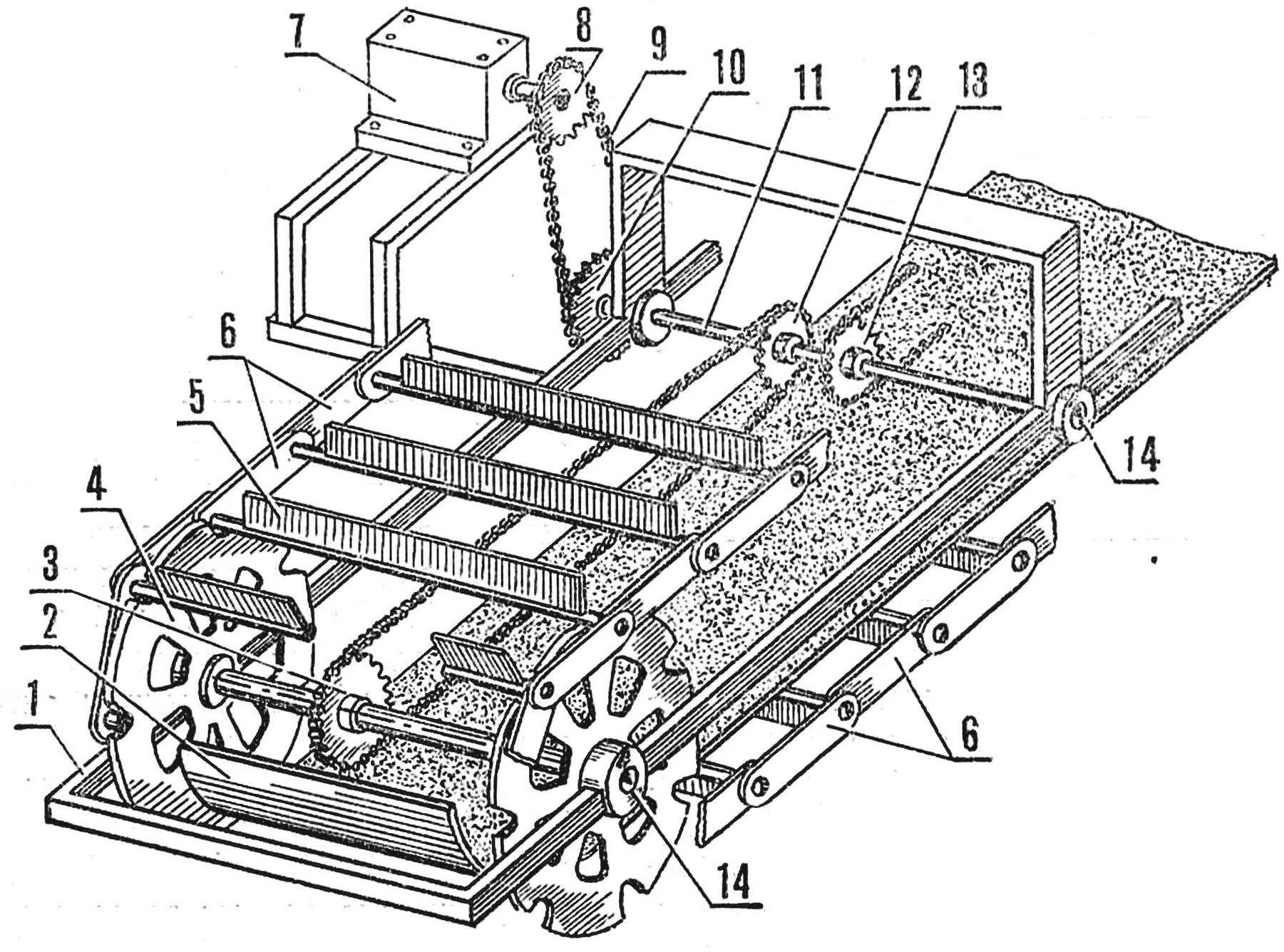 The constructive scheme of a propeller:
1 — the frame of the snowmobile 2 — reference of the ski,the 3 — sprocket driven front axle,4 — drive wheel,b — grouser,6 — cheeks-links cupidities,7 — speed transfer case,8 — sprocket transfer case, 9 — roller chain, 10 — sprocket driven intermediate shaft 11 intermediate shaft 12, 13 leading to the intermediate shaft sprocket (to drive front and rear axles), 14 — bearing units.
The experience of a decade of research, gave an opportunity Nezhdanovskoe to design a snowmobile of his own design, having extremely high traction characteristics. 24 Feb 1914 in Hodynsky field he had his trials, which were attended by I. E. Zhukovsky. The designer himself brought to the measuring distance a machine called a snowmobile with “lignocainum mover”.
The results exceeded all expectations. When running the weight of 265 kg and the engine power is only 1.5 HP speed movement on loose snow was 12 km/h And the most surprising was the fact that the sled glided over the surface without sinking, though the depth of snow exceeds two feet.
In 1916, after another test, the Department of inventions of the Moscow military-industrial Committee concluded: “Only one made the motor sleigh is quite good moving on absolutely loose snow, is the sled S. S. Nezhdanovskoe”. The author was awarded the first prize, and Ministry of Commerce gave him a safe-conduct.
So what is the propeller S. S. Nedanovska!
The main idea is that instead of traditional tracks (metal or rubber) applied to the reference ski and easy (“fishnet”) circuit, do not carry vertical loads from the weight of the sleigh. Due to the fact that the entire weight of the snowmobile took mounted inside the chain wide ski, specific pressure on the snow was only 0,045—0,05 kg/cm2. The curvature of a sock skis, Nezhdanovskoe selected based on years of experiences, provide minimal resistance to movement and nejvyhodnejsi compaction of snow. The ratio of the length of the ski to its width is 8:1.
Translational motion is openwork metal chain, consisting of lugs and the side cheeks of the chain links. The circuit was mounted between the pairs of light weight front and rear driving wheels. In the rim of each wheel was provided for the recesses for the protruding ends of the cleats. While driving the jet ski zooms to fit the front chain and slides on it. The snow is not squeezed from beneath the sole to the side of the ego occurs when the movement of conventional skids, and is sealed in the space bounded on all sides by the lugs and walls of the cheeks of the chain links. Pressed thus, the cubes of snow work fine on the shift, preventing the stalling of the chain.
The only drawback mover Nezhdanovskoe identified during testing was that the snowmobile was a bad move on hard ground, e.g. on ice or heavily compacted snow. So I had coaxial with pairs of driving wheels to install additional wheels have a larger diameter. But when driving on friable snow the level of efficiency of the propeller Nezhdaninskoe remains unattainable for all other types of snowmobile equipment to this day.
I. USENALIEV