The beginning of this century has given mankind many inventions. Stunned by the enormous speed of technological progress, people do not have time to get used to the newfangled term “car” as they were attacked with even more new “airplane.” And cost them to get used to, for example, the word “phone” as we had to learn the concept of “wireless telegraphy”. 1904 was the date of birth of another device, which later received widespread. That’s about it, in 1905, reported in the journal “the Balloonist”, calling it a “sled with air band for movement through the snow”. Was mentioned and the author of the design — engineer of the S. S. Nezhdanovskoe.
The new vehicle was a light sledge on which was mounted an internal combustion engine with aerodynamic propulsion — propeller. In 1907 at the Moscow factory “Dux” was built and tested “ski car” Y. A. Meller, designed by him in collaboration with engineer A. D. Dokuchaev. A year later this machine got quite a snowmobile, came into use another term. It should be noted that the invention of Russian engineers was invaluable for Russia, with its Grand spaces, where the snow cover lasts sometimes many months. There are some remote areas of the North could make available only such mechanical transport.
The advent of the snowmobile has aroused great interest: Tolosa the next 5 years, Russia has created more than a dozen varieties of such machines.
The emergence of the first production vehicles can be attributed to 1912, when the Russo-Baltic plant began construction of party transport of the sled by order of war Department. By the time the snowmobile machine drew attention abroad: in France, Austria, Germany and other countries. And when the outbreak of the first world war, snowmobiles have been used on the front. In the winter of 1914/15 year, they were used for reconnaissance, communications and other operational tasks of command. Operated these vehicles in the German army. The commander of the German forces, General Hindenburg, it was clear that Russia with its very poorly developed network of roads “snow cars” can provide invaluable assistance to troops. That is why, in the prewar years, the General has closely followed the work in this area, participated in the testing and acceptance of the snowmobile. 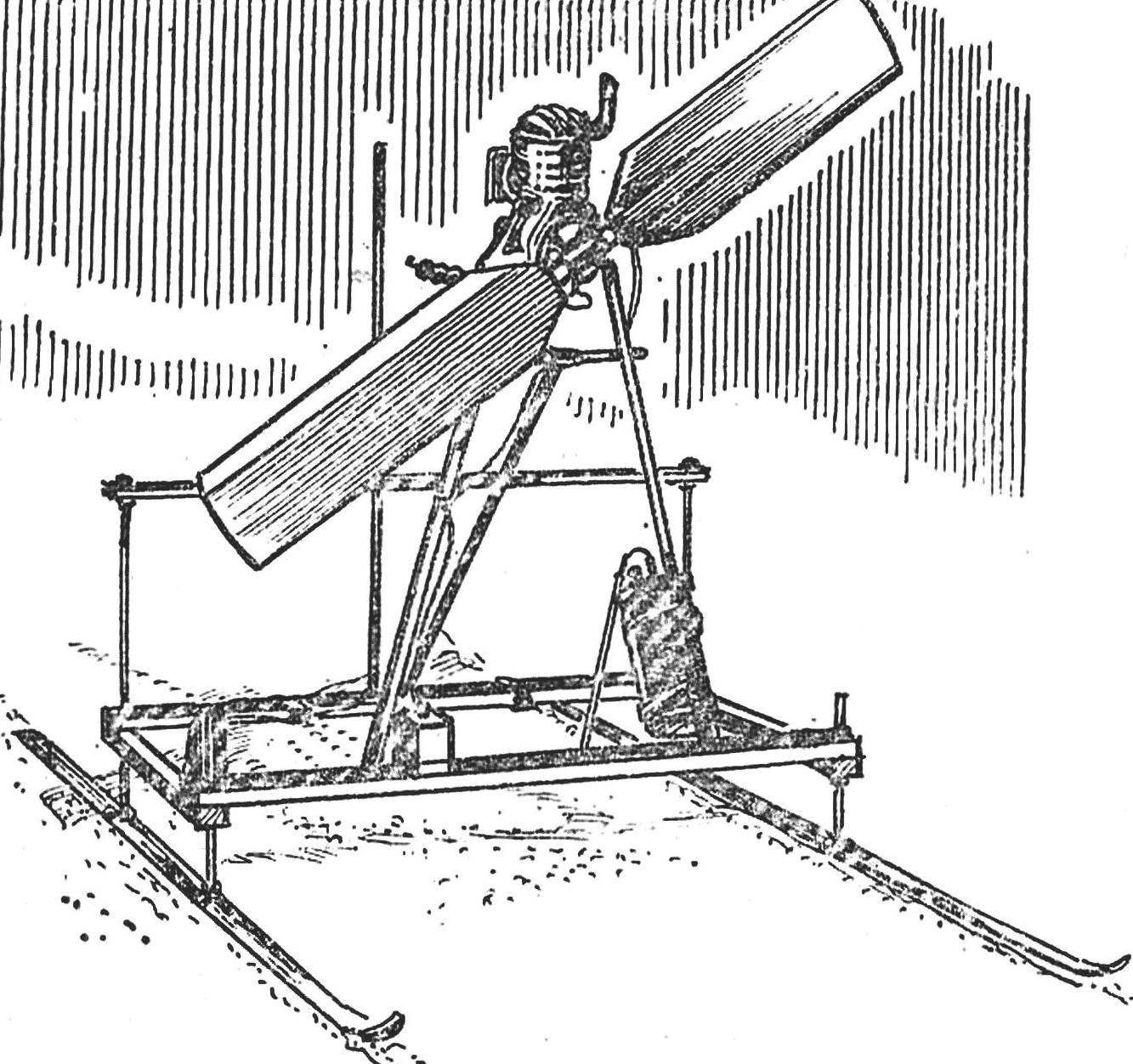 Snowmobile Nezhdanovskoe S. (1903)
Part snowmobile of both armies in the fighting was so successful that in mid-1915 all-Russian Zemstvo Union (VSS) in charge of the supply of the army, ordered to expand the production of transport planes for the war effort.
The winter in the automotive Department VSS, which was led by Professor N. R. Brilling, with the participation of the engineers of this Department, A. S. and Cousin, A. A. Arkhangelsky developed, and then in workshops VSS built a batch of 24 planes. Some of them armed with machine guns, the rest were intended for transporting the wounded. The use of machines at the front have shown that they can provide combat operations, operational communications, transportation of ammunition and other transport tasks.
After the great October socialist revolution, during the civil war, several snowmobiles, built in the Automotive Department WSS was used by the red Army. Was the snowmobile and the arms of the invaders: in the far East — the Japanese, in the North — the British. Used snowmobiles and Kolchak in Siberia.
In the winter of 1918/19 year with increasing difficulties in rail transport demand of the red Army all-terrain vehicles was especially pronounced. One of the most successful projects proposed by the engineer A. S. Kuzin. To give the conclusion about this machine, was organized by a Committee composed of N. Zhukovsky, V. P. Vetchinkin, V. S. Stechkin and A. N. Tupolev. At the same time to conduct scientific work and to create new types of snowmobiles on the proposal of the Zhukovsky was established the Commission for the construction of the snowmobile (COMPASS). And in September 1919 began the development of ten snowmobiles.
In the early 1920 began the construction of a series of snowmobiles”Be-Ka”, designed by Brilling and Cousin. Of these machines came to the front and participated in the fighting, three of the sleds used in the liquidation of the Kronstadt rebellion. Armed with machine guns, they were in the ranks of the attackers during the storming of the fortress, supported by the fire of the advancing red Army, distracted the fire of the fortress batteries.
After the civil war the construction of the snowmobile continued. Until 1939, the institutions of the US and TSAGI has created over twenty designs. In 1932, several variants have developed a Department of construction of gliders and snowmobiles (OSG). In 1934 the organization transformed in a special plant Lasagabaster, mass-producing machines of the brand NC project chief designer N. M. Andreeva. Then at the Gorky plant “Red metalworker” under the leadership of chief designer M. V. Veselovsky was put into production type snowmobile KM. 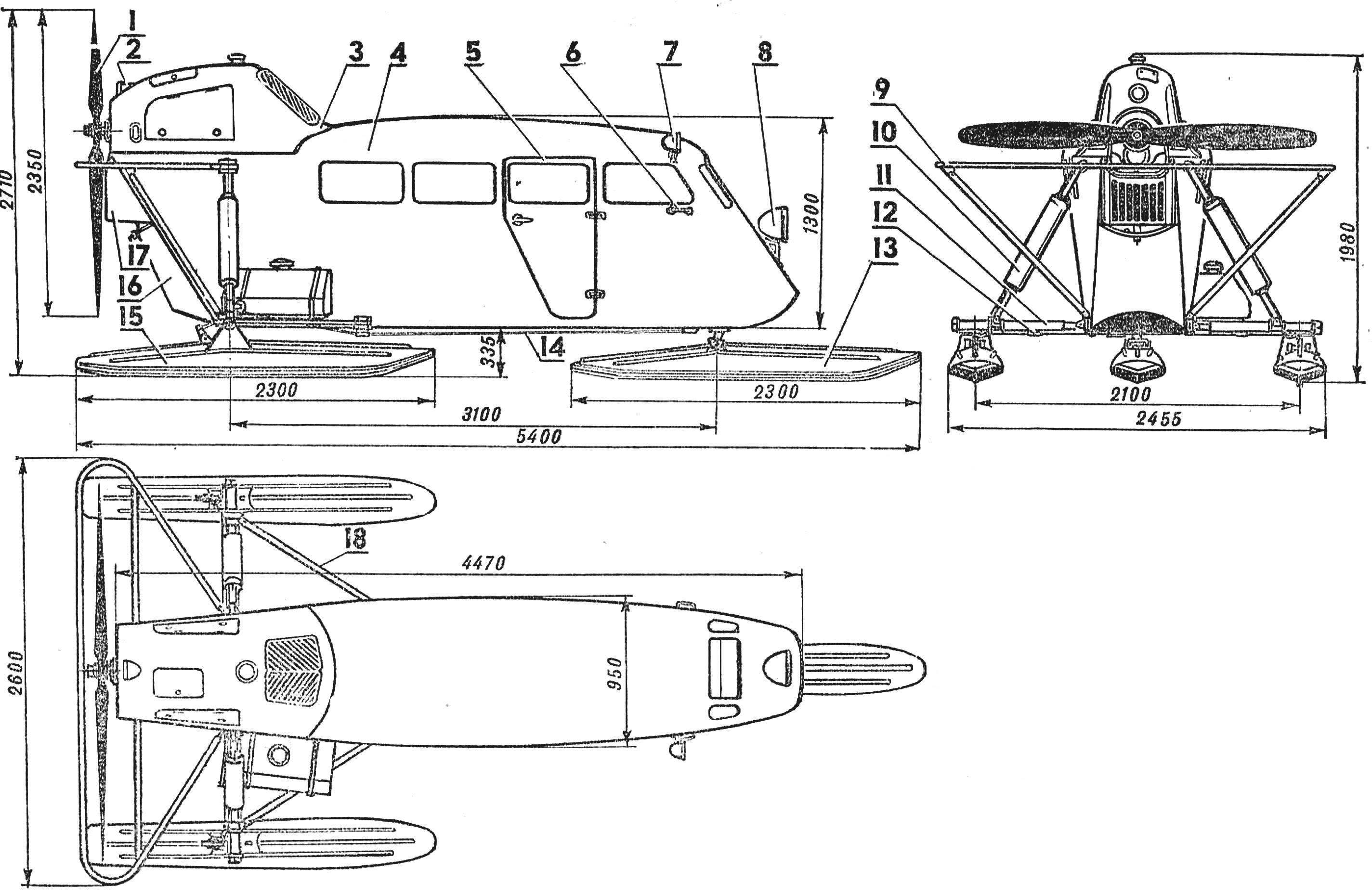 The sled KM-4:
1 — propeller, 2 — rear light 3 — engine, 4 — housing, 5 — door, 6 — towing handle, 7 — spot light, 8 — headlight, 9 — fencing screw, 10 — suspension strut, 11 — axis, 12 — brake cable, 13 — front ski, 14 — start-up cable, 15 — rear ski 16 is hinged Kok, 17 — rear grille, 18 — leading traction.
Widely used snowmobiles with a propeller in the war with the white Finns (1939-1940). It was commercially produced TSAGI-ANT-IV design A. N. Tupolev and the OSG (NKL)-b N. M. Andreeta. The latter, equipped with mounted on a rotatable turret machine gun, uchastvovashih patrolled the open areas of the front, carrying the outposts of the objects. Due to the high speed and good maneuverability of the fighting machine was very effective for the detection of enemy firing points and artillery fire adjustment. They are also used for operational communication, transportation of ammunition and food. Specially for rapid transport of seriously wounded promptly, bills designed ambulance NKL-6C. Then took arms staff NKL-38, behind it is a cargo NKL-12 for maintenance of the airfields. These europlatform was used for transportation fuel in barrels, the delivery to the aircraft engines and other equipment.
The great Patriotic war has forced to intensify work on the creation of new snowmobile designs. At the end of June 1941, in accordance with the instructions of the Council of Labour and Defence on training the red Army for the winter industry has given the task to develop a reliable combat and transport planes, providing their serial production by the beginning of winter. At the same time was established a special Department of the red Army in the armored forces, which was all the organizational work and support of special combat and transport units we. The thing was so massive that in the same year managed to form the first transport we battalions, carrying out responsible tasks of command.
In the drawing, developed under the leadership of N. M. Andreev and M. V. Veselovsky, began production of a new combat NKL-26 ESR-8, transport NKL-16/41 and later NKL-16/42. Picked in combat and transport battalions of these machines in the last days of December 1941 and January 1942 came to the army.
Hundreds boutih and transport operations conducted during the war we battalions. Extremely wide was the scope of their use at the front. High speed and good flotation on snow idle field provides combat the snowmobile surprise appearance at the locations of the enemy, tied, as a rule, roads and human settlements, the speed of transactions and instant departure upon their completion. 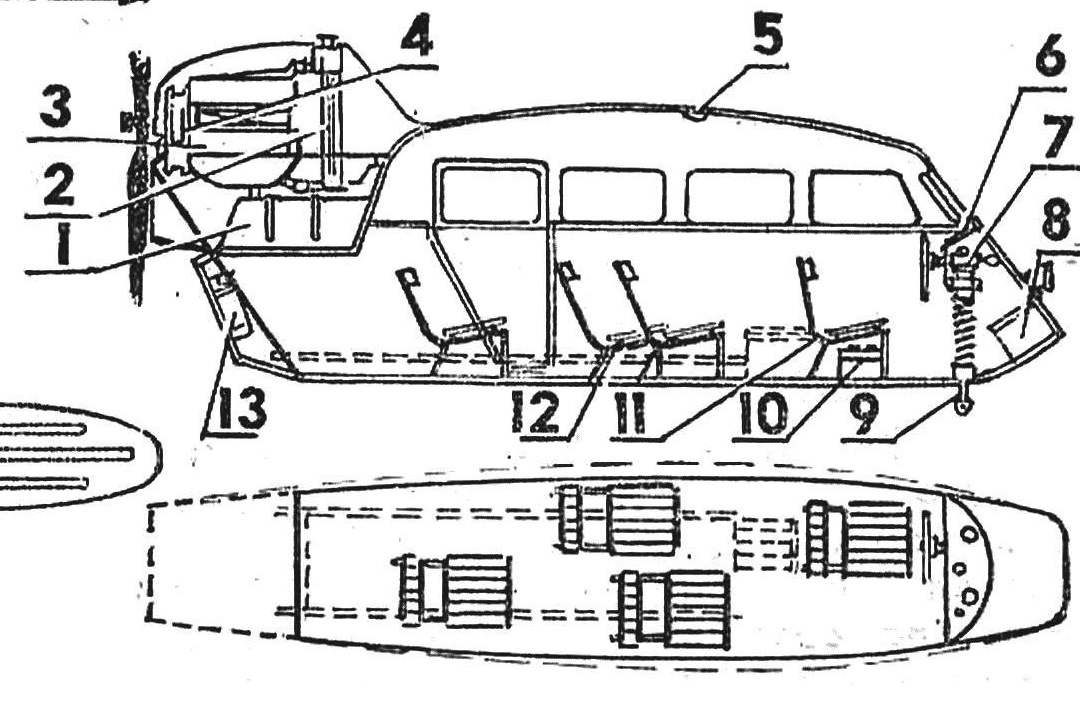 The layout of the sled KM-4:
1 — fuel tank 2 — radiator, 3 — engine, 4 — reducer, 5 — shade, 6 — instrument panel driver 7 — steering, 8 — tool kit, 9 — front axle 10 — battery 11 — the driver’s seat, 12 — seat passenger, 13 — side bucket.
In such cases, for the military should, as a rule, landing snowmobile with units of skiers. Raids groups was made on the front lines and behind enemy lines. The assault destroyed the rear garrisons and bases, frustrated the movement to the front of the enemy transports with food and ammunition. In early 1942, Hitler’s army was driven from the near approaches to Moscow. Especially fiercely resisted the enemies on the frontline, where they confronted the 16-th army, commanded by Rokossovsky. Here it was deployed more than a dozen Airscanner combat and transport battalions.
In the book “Soldier’s duty” Marshal of the Soviet Union Konstantin Konstantinovich Rokossovsky gave a high evaluation we technology. “At our request, V. D. Sokolovskiy sent we a company, wrote Marshall. — It was situated at the rear headquarters of the army. Every snowmobile armed with light machine gun.
Very strong support, not only for live connection is found.
In the second half of February German ski squad and up to two hundred and odd soldiers at night penetrated to the rear of us and crossed the road behind the right wing of the army with all necessary. Created at the time of emergency.
Roth immediately moved into the area occupied by the German skiers, turned around and attacked, firing their guns out of fourteen. The Germans were scattered, destroyed. Taken in this encounter, the prisoners in one voice saying that this attack stunned them; they took the snowmobile for tanks and was amazed why machines like flying through deep snow”.
Worked snowmobile on the ice of lake Ladoga, transporting goods along the “Road of life” to Leningrad, and beezie machine NKL-26 was guarded that the only transport artery, linking the besieged city with the mainland.
In January — March of 1942, we battalions ensured the movement of military units and military cargo during the liberation of the cities of Volokolamsk, Klin, with their direct participation have been a number of successful operations in the area of Staraya Russa, Tikhvin, Pskov. “Snow carts” can be found in the Central, Kalininsky, Volkhov, North-Western, Leningrad and Karelian fronts. 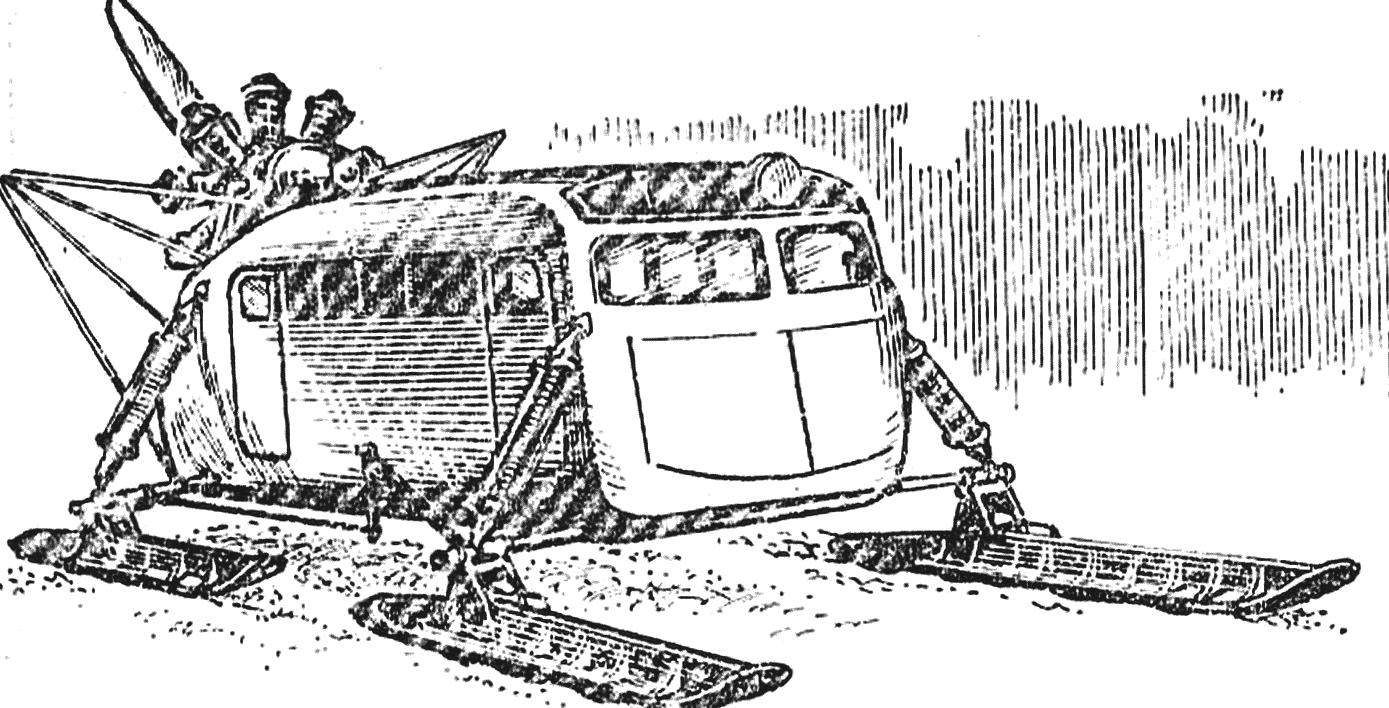 Landing snowmobile ASD-400
During the battle of Stalingrad snowmobile was used for communication, as a staff car, they threw the machine gunners in the rear of the enemy. A special division of sanitary snowmobiles used later in the liquidation of our troops encircled the German troops. They drove to the front of ammunition and food, and return flights evacuating wounded to the field hospital.
…Command of our troops stationed near the Ilmen lake in Novgorod urgently needed. Repeatedly sent scouts behind enemy lines, but bold raids were unsuccessful. Difficult task decided to entrust 53 th battalion fighting snowmobiles. At the maximum speed of the machine with the paratroopers broke into the village in the shortest battle with the stunned Nazi warriors was captured several prisoners, and snowmobiles, swift maneuver out from under enemy fire, returned to the location of our parts. The prisoners were delivered, and the information that they had, okazalas very valuable.
Successful actions we techs at the front contributed to the skillful leadership of combat and transport battalions of these machines from the Armored Directorate of the red Army (ABTU KA). The merit of this Department in close Association with companies producing snowmobiles, KB, developed this technique. For example, on the order ABTU KA was created “repair briefing” on the basis of the NKL-16, providing prompt return to order of the downed enemy planes. Was constructed in this period and the new machine: mobile machine-gun installation — NKL-34, small cars with motorcycle engines SN-1 and SN-2. Much work has been carried out by A. A. and I. A. Beskurnikov by Beskurnikov, which was part of the management of their large amphibious snowmobile ASD-400 was successfully tested in the winter of 1943/44.
…Ended the Great Patriotic war, but beezie snowmobile continued to perform military service, mostly in the border troops. Transport car engaged in peace work. Usually they worked .the Ministry of communications of the USSR — delivered mail on regular routes along the rivers Amur, Lena, Ob, Northern Dvina, Mezen, Pechora and others where to run the regular vehicle was impossible.
I. USENALIEV, engineer