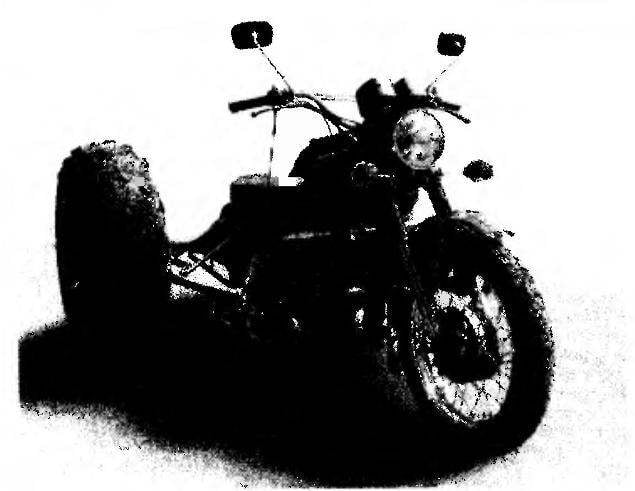 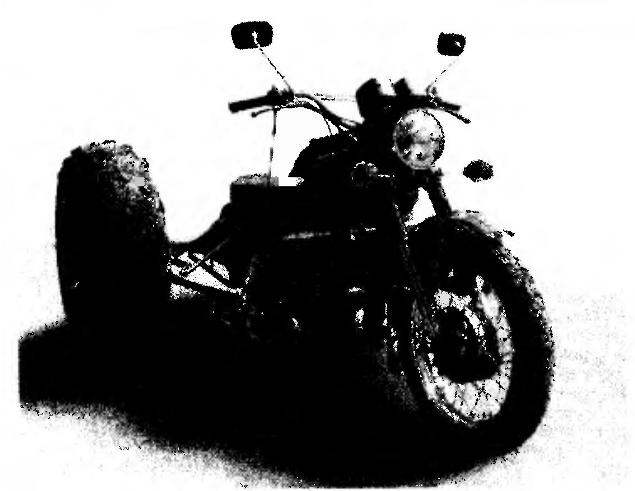 A prototype of the proposed tricycle car was made by me on the basis of the motorcycle “IZH” chamber with two leading wheels and a steering ski. It seemed that the desired result is achieved: the machine ran well on the snowy road. True ski on Packed snow bad coped with its task. Spring revealed other shortcomings of this design. Riding on the roads in the thawed disabled even ski in stainless steel. Instead, I put the pneumatic chamber from 12.00—18,” but now more heavily affected by the lack of differential lock — a snowmobile was very difficult to manage.
Then I installed the rear axle gear from the old truck GAZ-51. The car was maneuverable, but not left other problems and the main one — chamber Pneumatics, barely enough for a year. Long puzzled over what would replace them, and once I was pointed in the technology of mechanical cutting of rubber, which was very helpful. I decided to make tires for the suspension, cut the tread from the tires of trucks, and at the same time to dramatically improve the entire structure.
Only manufacturer of rear axle and wheels took me almost all winter. So if someone decides to follow my example, let be patient. But as a result he will get a machine that will last him for years. With these wheels dramatically increases the speed because there is practically no vibration, and throughput is greatly improved due to the presence of the cleats.
As I understand it, among the lovers of design who saw my Rover, aroused interest not so much he himself — its design is not so complicated as the original wheels with tires. So here is a fairly detailed description of their manufacture.
For tires I opted for the tire size 12.00—18″ such are the wheels of the GAZ-66 and ZIL-157. For Snegurochka-Yes, acceptable tires and from the wheels of trolleys of tractors K-700 and T-150. They are much wider, but, unfortunately, heavier. Rim diameter tires 18” I chose because that could make a wheel out of my existing parts. If someone has the opportunity to purchase wheels 12.00—16″, I would have considered him lucky.
Tires will go even those who are not surfacing, but without through holes. Many hunters had themselves previously cut from felt wads for shotgun cartridges. So, similar to pererobka mill for a long time became my main instrument. To insert the cutter directly into the drill instead of the cartridge, made with a cone (working with the mill-pererobki, clamped in the Chuck of a drill, get tired faster). The sizes of the cutters took an arbitrary and imprisoned just included the emery wheel and brought to him rotating in the drill cutters.
The amount of detail of the tread on the wheel is such that it is not allowed to “thin out” through one without breaking the balance. So, marking them with chalk, did one cut — one left, two cut — one left to continue in the same sequence. And in “Christmas trees” boss of lugs disposed at its sole discretion. Prior to milling was inserted into the tire chamber and pumped. It is better felt layer between the tread and the cord, although sometimes exciting and kordovye thread, but frame — megaloi-
and these flaws on the strength of the tyre is not affected. (There is another, more simple technology, with the tires just peel the rubber to the cord, but then lose the most valuable — powerful of lugs on the lid.)
Received the tires I use all year round, and their strengths and durability evaluated during three years of operation. My friends are craftsmen, too, have made these tires and was very happy. It’s certainly not a revolution in the manufacture of the tires, but already some progress. After all, our industry does not unfold with the production of tires for snowmobiles, and imported most smodels-cov can’t afford it.
With the installation of such tires on the wheels, no need for the longitudinal and transverse straps, and most importantly, the bolts, the number of which is determined almost by the bucket at the equipment of the vehicle chamber tires.
Wheel made with a collapsible rim, combining them from automobile and motorcycle. For each wheel on the guillotine of steel sheet of thickness 2 mm strip cut size mm 1430×330 and bent it on the rollers in the cylinder. “Izhevsk” wheel 18″ freed from the spokes and the rim cut with a angle grinder along. With the halves of the rims of the sides removed the holes and recesses for the spokes nipples. On each side was left with nine petals. On one side put the cylinder, leaving the petals inside, and pulled off his wire. Petals as joint sheet of cylinder, provari, pre-fit edge “grinder.” In the petals of the second side drilled hole with a diameter of 5 mm, and put it on the cylinder with the petals outwards, and the holes in the latter drilled the appropriate holes with a diameter of 4.2 mm in the wall of the cylinder, and removing the Borg, cut them, thread M5. The wheel I used the discs 15″ (from the “Moskvich-402” or “407”), previously them a bit easier. 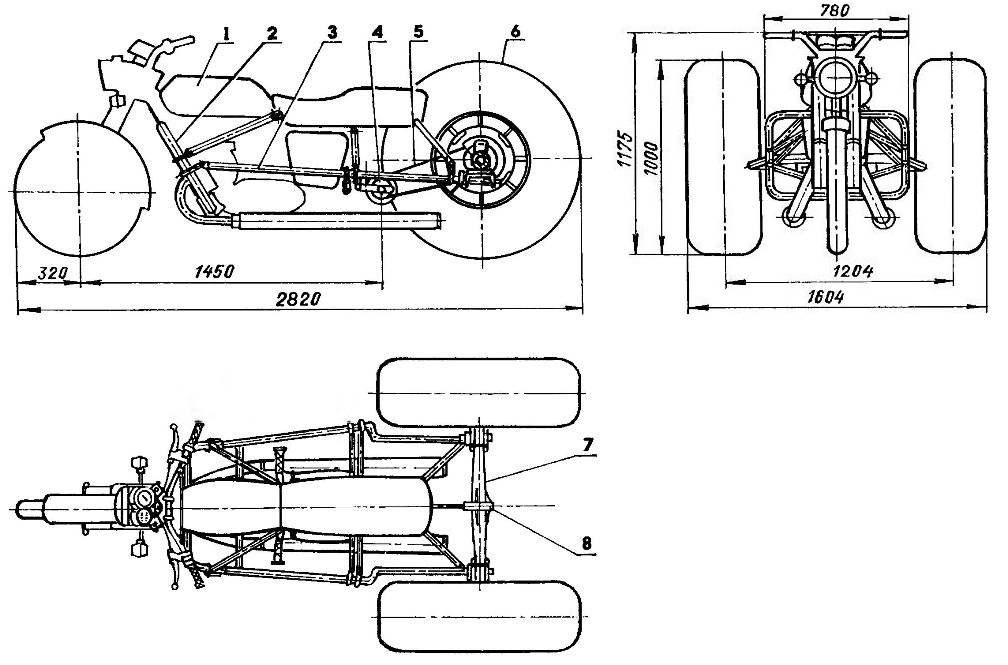 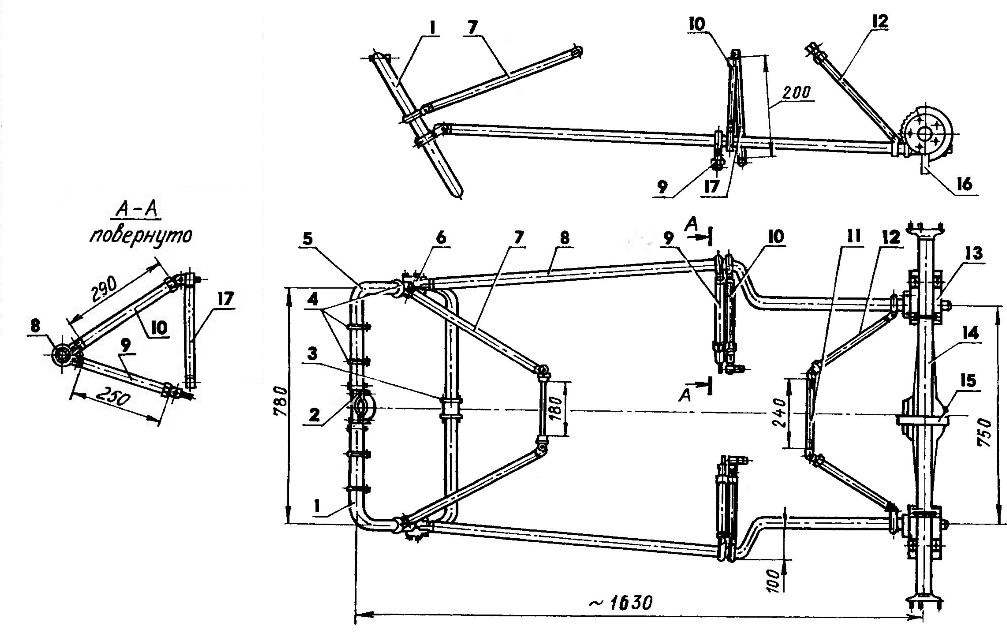 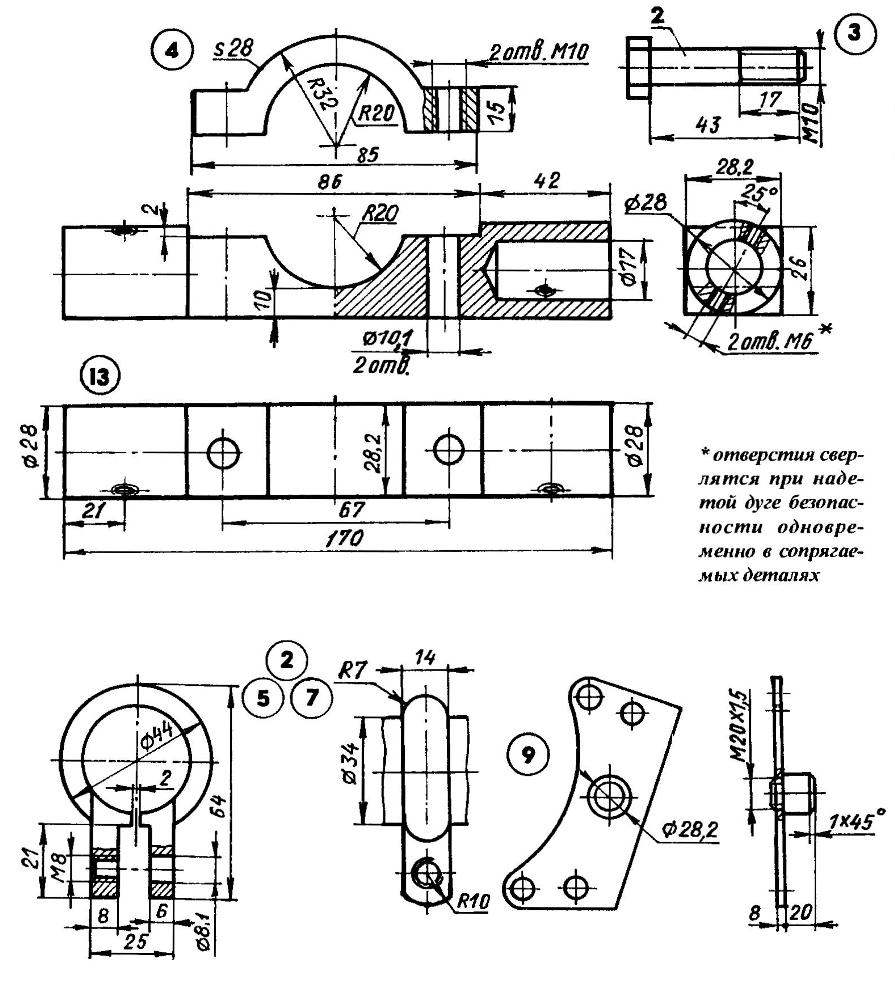 Mount arcs of safety to the frame of the bike:
1,6 — arcs of safety; 2 — the clip on the fog light (2 PCs); 3 — screw M10 (2 PCs); 4 — connector to bracket; 5 — a clamp of fastening of a sound signal (2); 7 — clamp mounting brace (2 pieces); 8 — socket mounting bracket side rail (2 PCs); 9 — cheek with the boss (2); 10 — bolt M10 split washer engine mount (2 PCs); 11 — fog lamp (2 PCs.); 12 — beeper (2 PCs)
Using a drill and a file”; (no longer use) to each disc in the middle of the rims has chosen four of the “window” without affecting the planting shelves for tyres 15″ (disk in the work can be changed). Mindful of the design left on the disc the attachment of the decorative caps to ground wheels they are not particularly affected, but with chrome hubcaps and rims rollers look beautiful.
Then from sheet metal of 3 mm thickness was cut down to eight plates on each wheel for the spacers. Their height — 38 mm (half the difference between the 18″ and 15″), and the length corresponds to the width of the rim “moskovichevskoe” drive. Plate before welding drove around the perimeter under the same dimensions in the package on the milling machine. With a angle grinder with a cutting disc with a thickness of 3 mm at the rim “moskovichevskoe” wheels made eight cuts (not touching the rim size 15″), put them in the prepared spacers and tack welded. Securing the disk on the axis of the axle and rotating it, adjusting the position of the plates and welded them permanently. Modified drive and put in the manufactured rim on the 18” and welded spacers to the cylinder. (As it turned out, it was made prematurely: the design of the bridge is such that by shifting the disk in the cylinder of the rim to achieve the symmetrical arrangement of the wheels relative to the longitudinal axis of the motorcycle.)
Then lightweight bus with a camera put on the cylinder and it also screws M5 attached to the other rim (the screw heads the inside have no influence on the camera).
The camera missed the nipple in the drilled hole in the cylinder and pumped the chamber. The pressure should be such that the camera put side tires on the motorcycle side. Tight fit is guaranteed their identical size and the tire to the rim will not crank. My wheels in operation for more than three years and no trouble until delivered, unlike the previous chamber, which is constantly about yourself resembled. (If any of the readers of the magazine will complement this technology, I’ll be happy.)
To connect the rear axle with the bike made the extra two-spar frame made of inch stainless steel tubing. Their rear ends arched by bending at the rim-relevant cov. (If the ability or desire to bend pipes-no spars, you can use them straight. But then the width of the arcs security will fit under the width of the bracket on the rear axle. This variant is easier to manufacture, but appearance is another.) The front ends of the side members with a special detachable bracket is connected with arcs of security, and recorded their position relative to the motorcycle tie-rods-struts in several points. 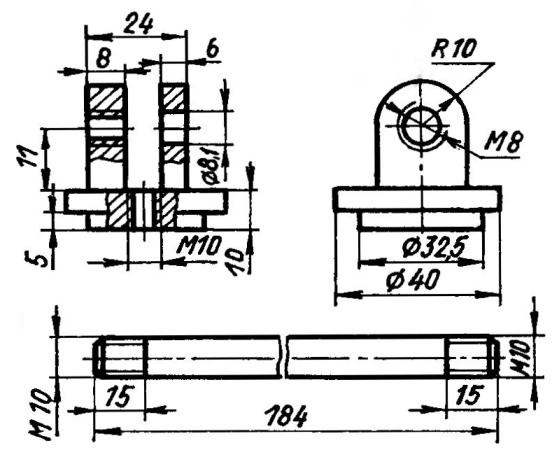 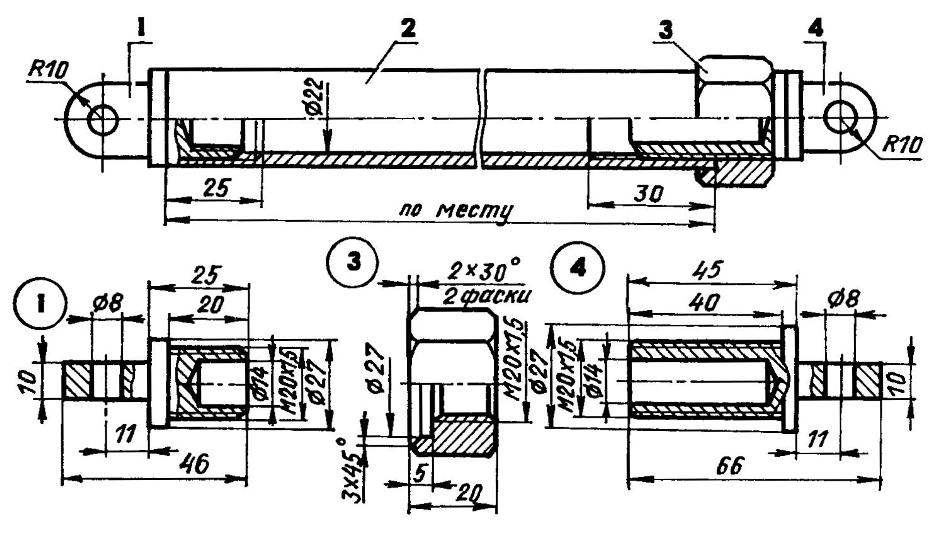 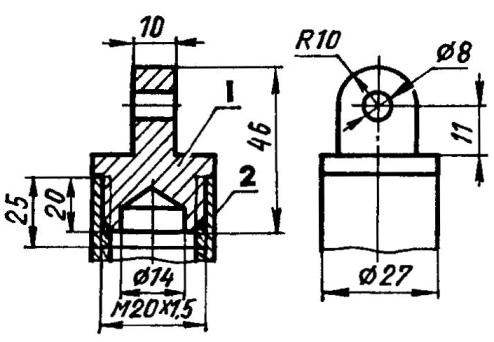 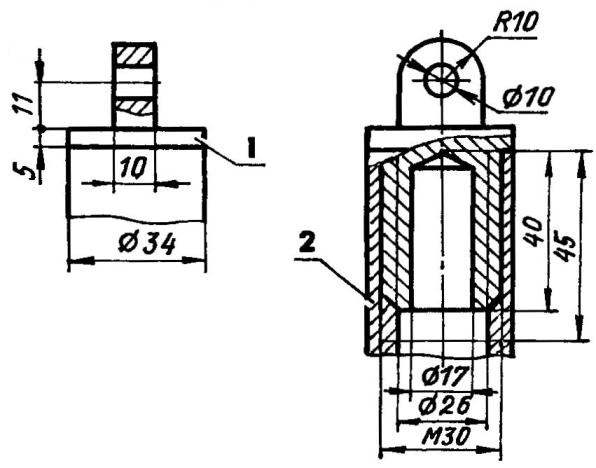 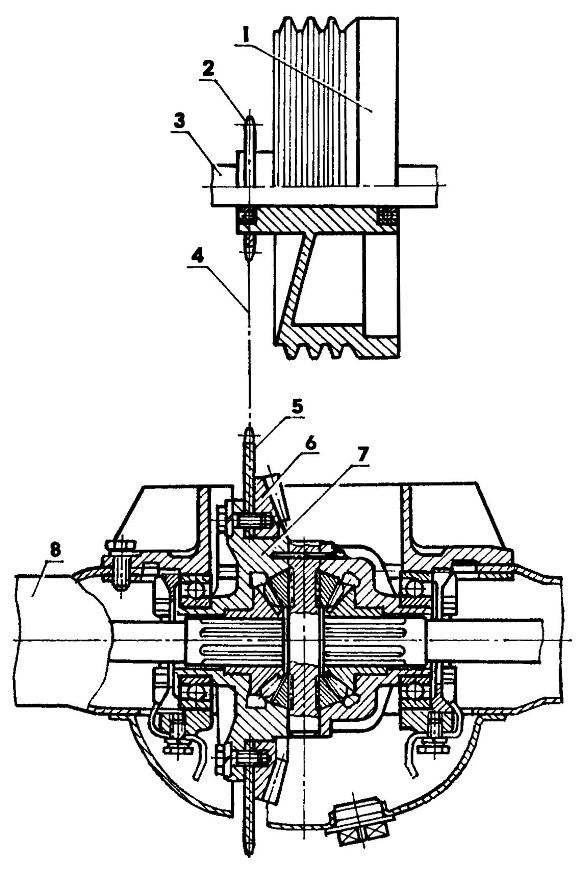 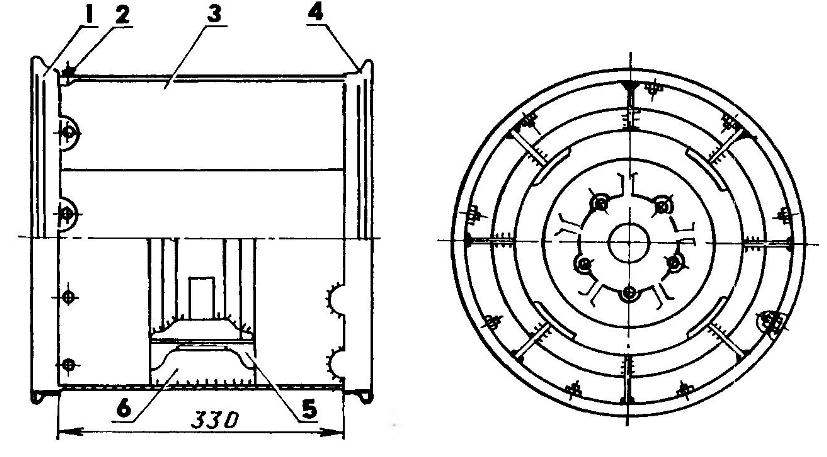 Mill for processing rubber
As arcs of safety to perfectly fit into the design of the pneumatic chrome headboards. Both backs were cut in half. The upper ends of the halves attached by means of detachable bracket mounted on the front tube of the frame of the motorcycle, and the bottom mounted lugs, screwed into a homemade 8-mm steel plate engine mounts. Before installation on the frame of the halves of the arcs of the security for each put on three clamps, one of which hung the fog light, and another audio signal. A third clamp is required for docking of the arc security tube-strut connecting in another location the frame of the bike and an arc of safety. 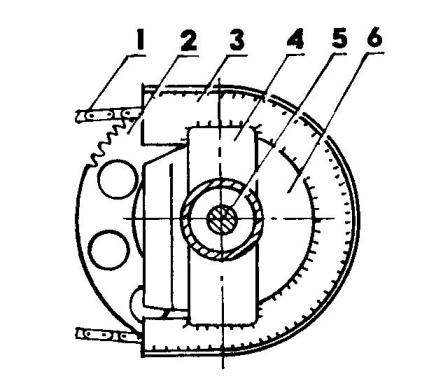 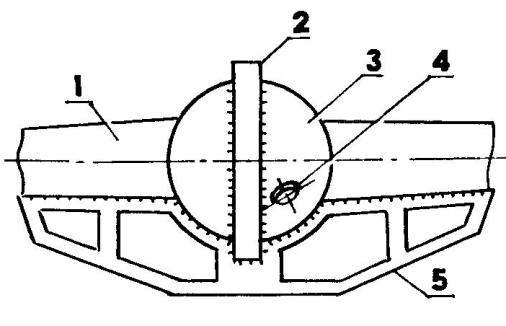 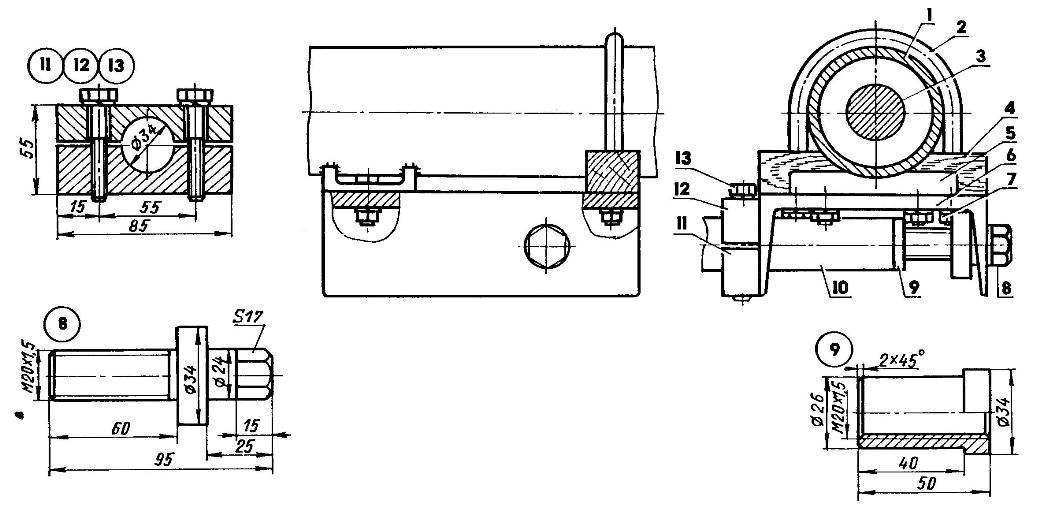