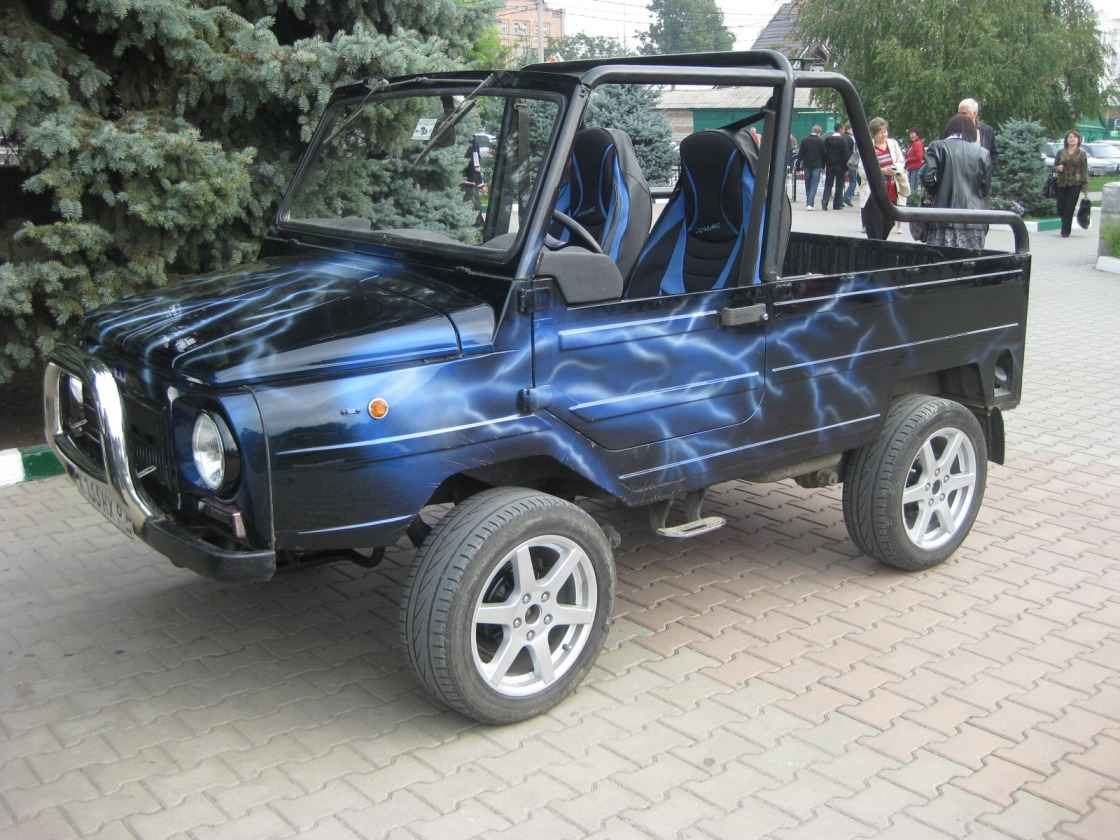 Even the ancient Romans realized that to quickly get to the farthest provinces of the Empire is possible only in the presence of good roads. This truth was so obvious that laying them in the Roman Empire became a matter of national importance. In the end, the well-preserved Roman road with broken cars still line function somewhere in the twenty-first century.
Well, in our country roads has always been a problem. Consequently, problems arose and the designers who had to think about what road they should design new cars. 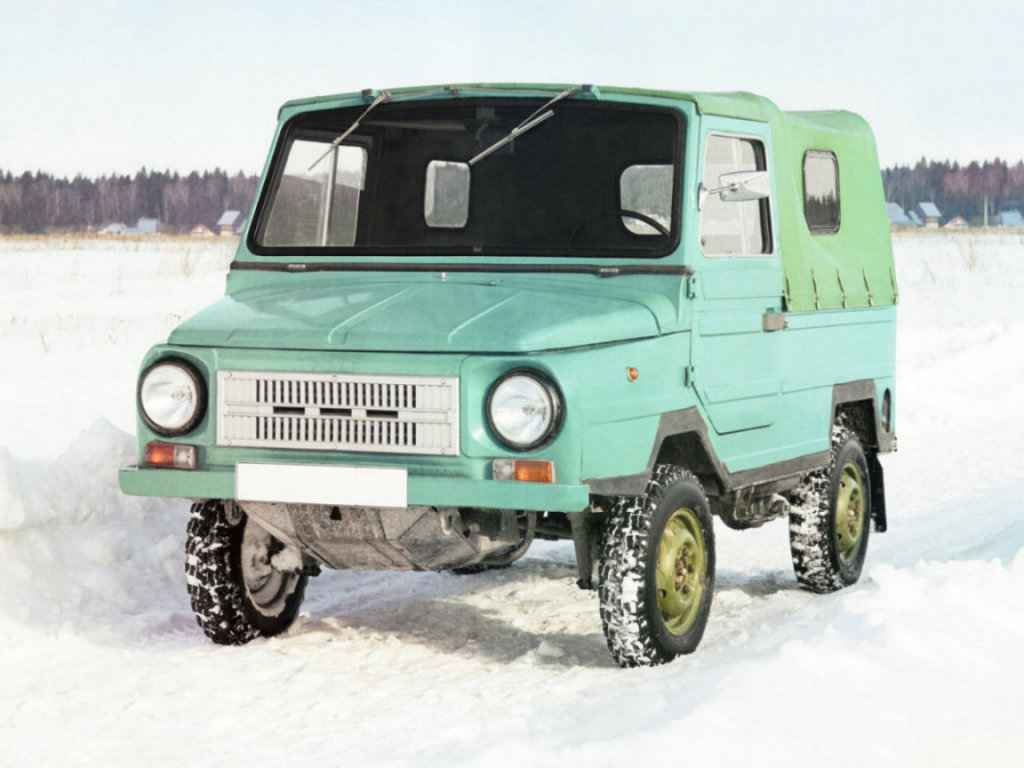 In the initial period of car ownership in the country was created only cars designed for paved roads, which were mainly in the big cities. Well, a significant part of Russian roads was a common primer that even after a light rain become impassable. It is for these “guidelines” and required the cars-Rovers, especially because preliminary calculations showed that it is cheaper to produce a small amount of off-road vehicles than to roll up the asphalt of thousands of ground Bolshakov, cobblestone paths or metalled road. And, in accordance with this concept, in 1930-e years in our country began to appear the first off-road vehicles.

In the beginning it was an army all-terrain vehicles, where their high permeability helped to solve not only a tactical, and sometimes strategic objectives. Among them was three and a half-track truck”lorry” triaxial ZIS-6, the first automobile four-wheel drive all-terrain vehicles GAZ-61, and army jeeps GAZ-64 and GAZ-67B. And with the beginning of the great Patriotic war, Soviet designers were able to get acquainted with those obtained under lend-lease jeeps with four-wheel drive type, MW Willys, Ford GPW and Dodge WC-52. 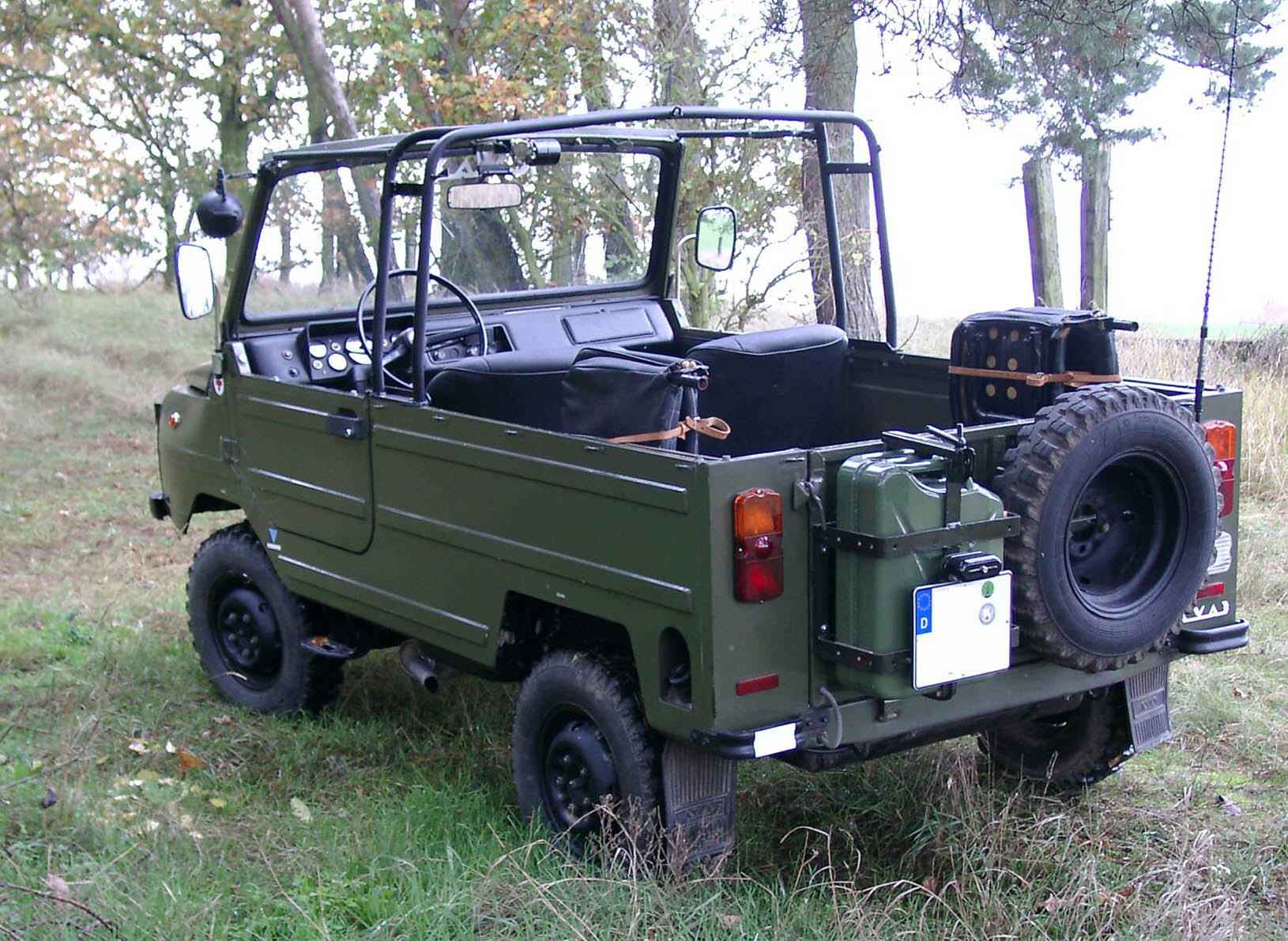 The experience of the Second world war showed that in the absence of a decent network of roads all-wheel drive vehicles, ATVs can be an indispensable means of transport that can be relied upon to ensure the delivery of passengers and goods in rural areas. In accordance with this, the creation of passenger and freight vehicles-ATVs has become one of the most important areas of motorization of our country.

So, in 1952, from the conveyor of the Gorky automobile plant came off an army jeep GAZ-69 (including its civilian version), and in 1955 – GAZ M-72 (all-wheel drive “Victory”), has Contributed to the creation of SUVs and the Moscow plant of small cars, has released several models of high passability on the basis of produced by the enterprise “Muscovites”.

Unfortunately, these machines could not be classified as a mass. The country needed cheap utilitarian vehicle that could be repaired without resorting to the services of the then existing garages. And the first such car was the LUAZ-969В that come in 1967 with the conveyor Lutsky mechanical plant, for the occasion renamed the Lutsk automobile plant. 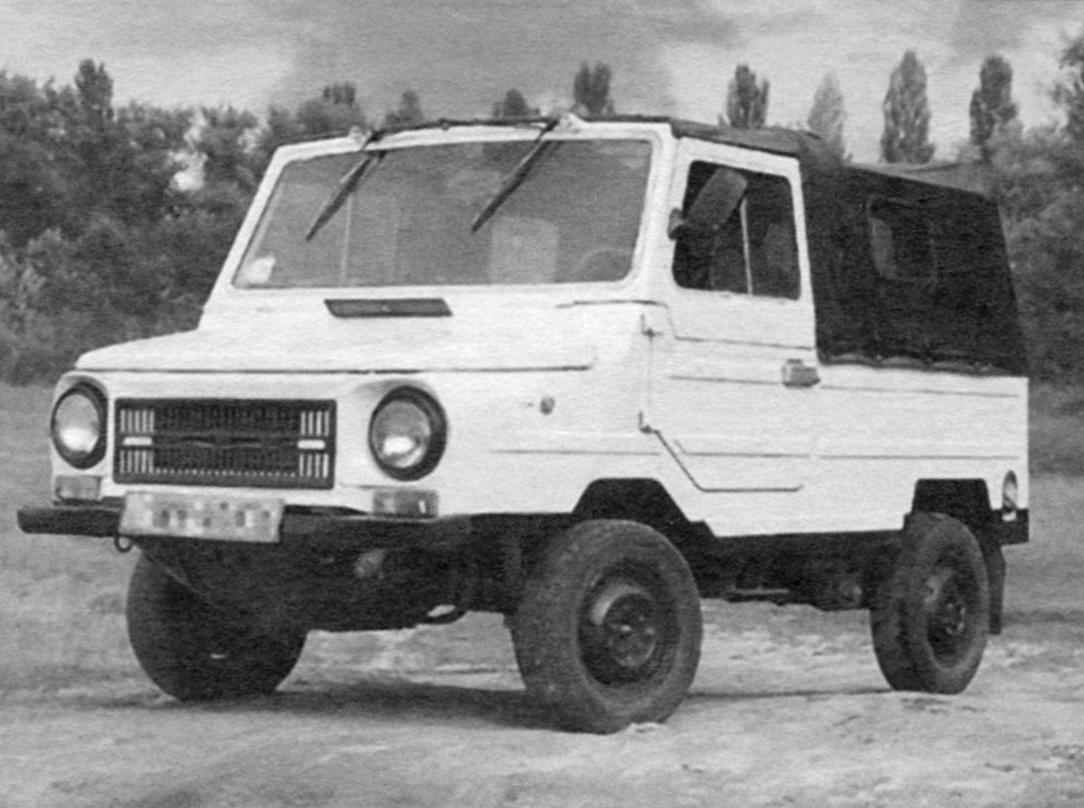 Predecessor civil mini-SUV was released in 1961, the compact military vehicle – amphibious vehicle ZAZ-967 TPK (conveyor leading edge). It was a very extraordinary machine, designed to evacuate the wounded from the battlefield and delivering on the cutting edge of ammunition and other military equipment. Engine, final drives, transmission TPK – all this was included in the design of a new car, received at first the name ZAZ-969В. True, at first the car was produced in front-wheel version (by the way, for the first time in the USSR!), and only in 1971, after the development in the production of parts and assemblies of the rear wheels came off the Assembly line full SUV LUAZ-969, equipped with a 23-strong “Zaporozhye” motor. Notice that the VAZ-2121 Niva became SUV # 1 in the Soviet Union, was put into production six years later, in April 1977.

The development of a civilian vehicle were conducted first in the US (Central scientific research automobile and automotive engines Institute) and then at the Irbit motorcycle and Zaporizhia automobile factories under the tutelage of renowned autoconstructor B. M. Fitterman (by the way, under his leadership was created the truck ZIS-150, as well as the first in our country, triaxial all-wheel-drive BTR-152). 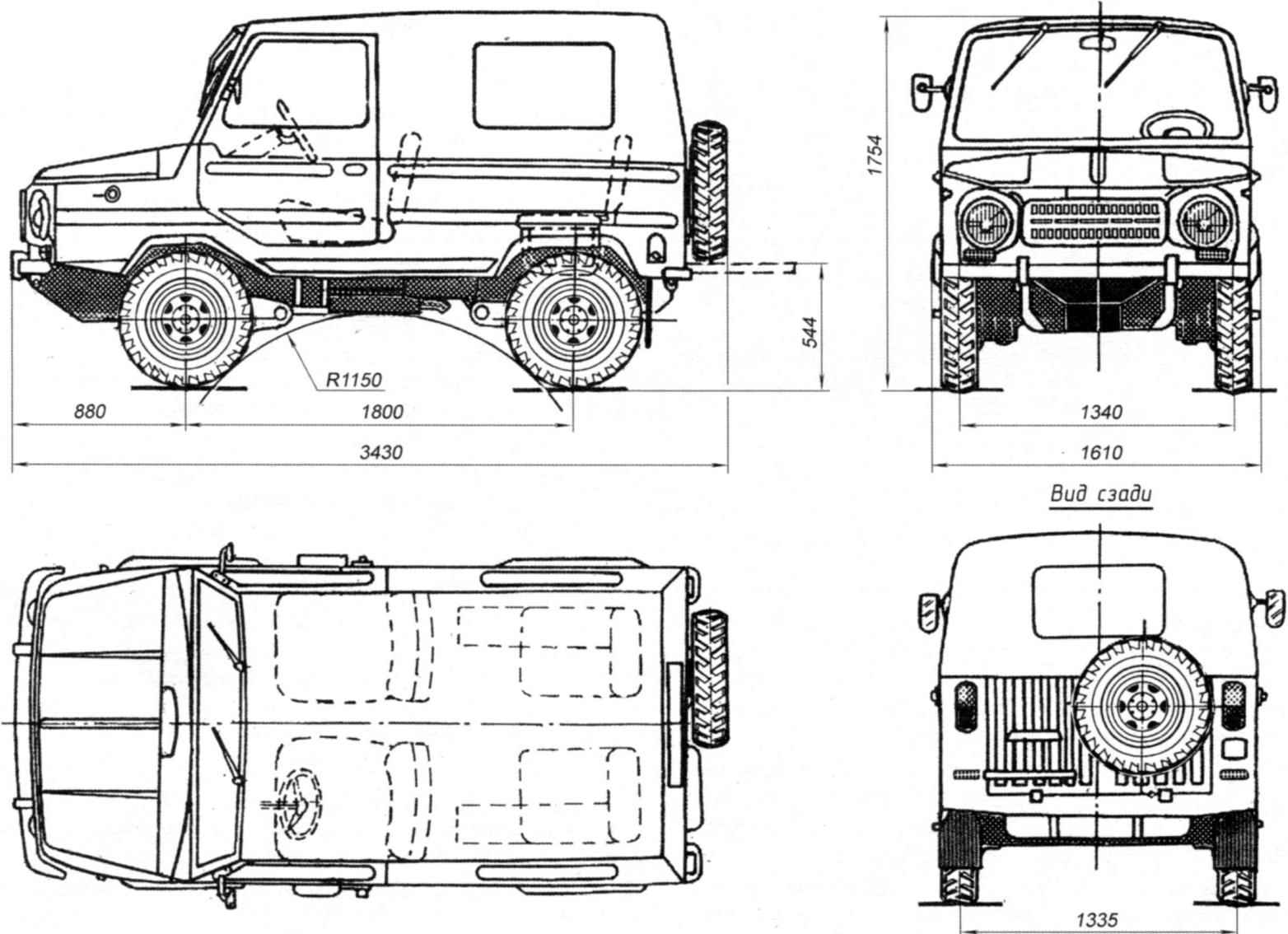 It Fitterman has offered the original decision of suspension ZAZ-969В based on the combination of extremely compact independent torsion suspension increases ground clearance reduction gears. 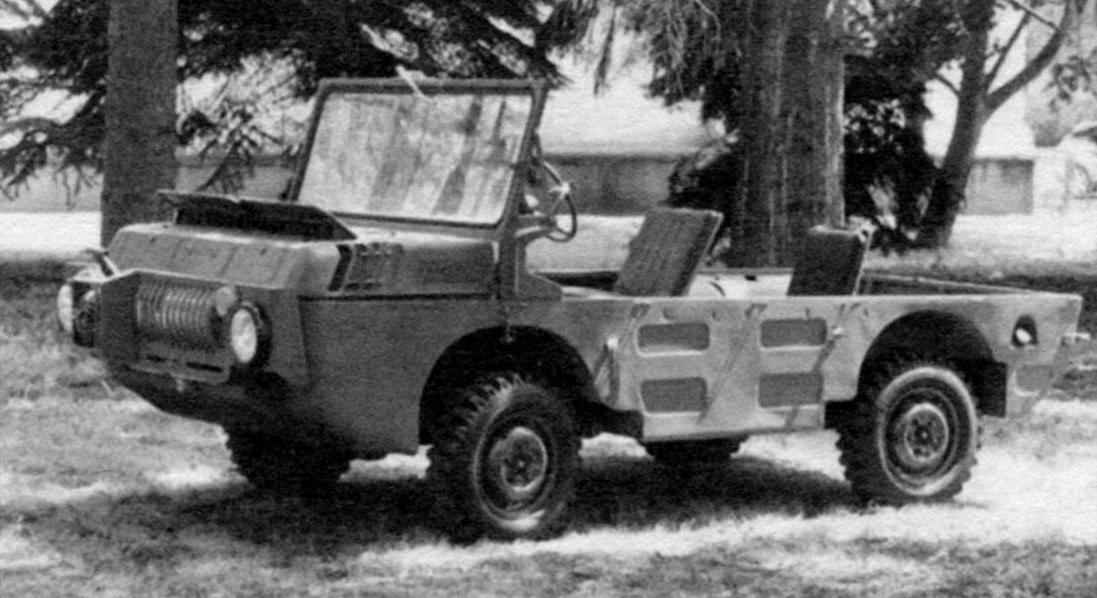 Located in the front powertrain, which includes engine, gearbox and final drive, was based on the V-shaped four-cylinder 23-horsepower engine MeMZ-966, the same one that initially equipped the first “Cossacks”. Transmission is rigidly connected with the rear axle tube (something like the deadwood), inside which held the drive shaft of the main gear – this design has eliminated the u-joints. The connection, if necessary, the rear wheels, auxiliary gearbox and rear differential lock was carried out by the driver. Paonessa body structure will significantly lighten the car, which also favored the increase of its permeability.

The transmission of torque to the rear axle was carried out using u-joints (from the wheel gear) and the moving crackers (from the differential). All wheel suspension – independent, torsion bar. Stroke when you swing the rear wheel was only 100 mm, but for vehicle-ATV this is quite enough.

Front and rear brakes of the SUV – reel, with separate hydraulic drive. Steering gear-worm globally with dvuhgrivnevka roller; its gear ratio is equal to 17.

The car from time to time subjected to modernization, and in the first place (in 1975) and it was equipped with a new engine MeMZ-969А with 40 HP And in early 1979 from the conveyor Lutsk automobile plant down the LUAZ-969М. However, its main differences from the previous model was more comfortable than its predecessor. So smooth was the ride, and it felt right for the driver and passenger in the front seat. Inside there is a glove box and ashtray and steering column equipped with the antitheft device. 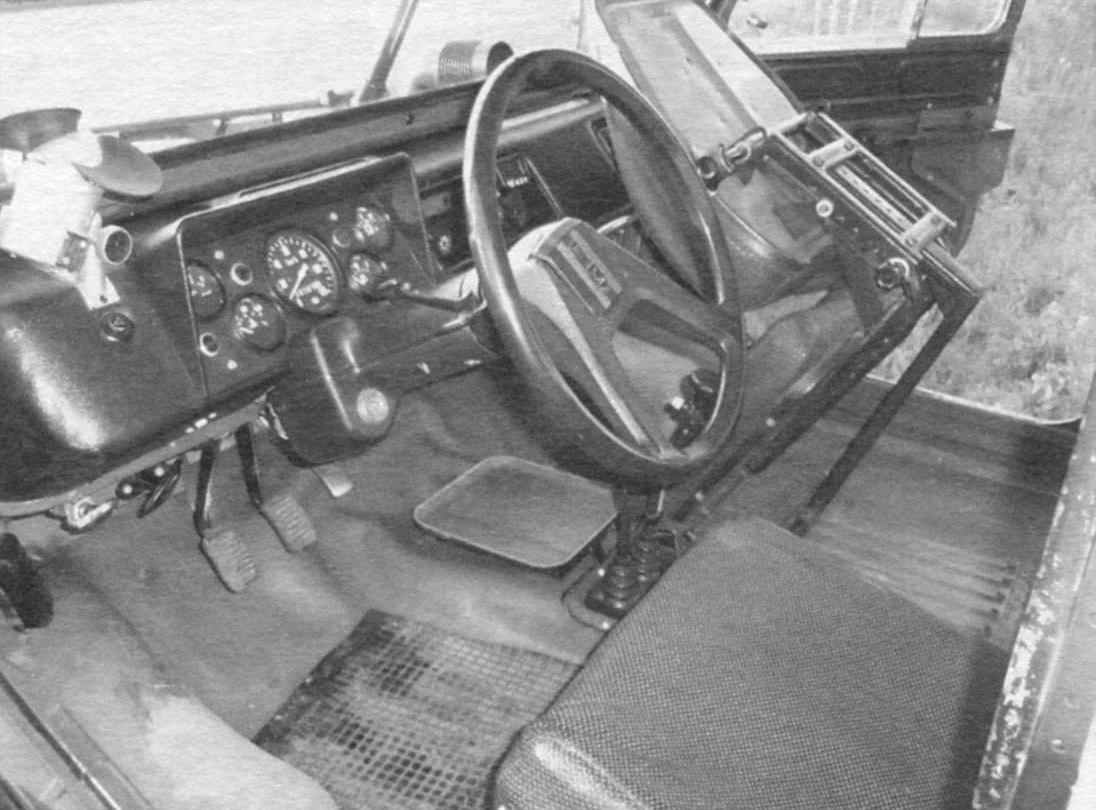 Significant alteration has been the body of the car. The designers have modernized the design of the front part and loop fasteners of the hood moved forward to exclude it spontaneous opening on the go. Changed lighting, and rear mounted lights license plate lighting, and ceiling backing. Door body, which should have been called “gates” turned into a full-fledged car, with Windows, air vents. The standard for many military vehicles instrument panel has become quite civil and is easier to understand the driver. It should also be mentioned that appears on the SUV sound-absorbing panels and improved insulation. Everything, the car was equipped with seat belts, power-steering and “Zhigulevskoe” chairs.

And again. LuAZ-969М got reinforced suspension arms travel stops wheels of an improved design, a more rational system of mounting of the muffler on the back polonesse and blinds cooling system of the engine is increased in size. 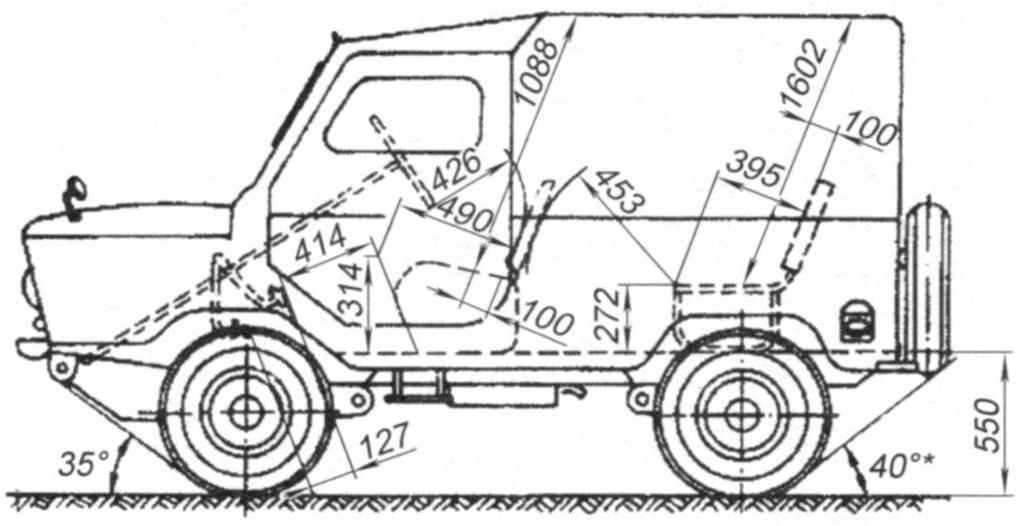 Basic dimensions of the exterior and interior LUAZ-969А

The production capacity of Lutsk automobile plant can produce up to 16,000 cars a year, which was, in General, is not enough for the immensity of the Soviet Union, however, the popularity LUAZ was clearly ahead of the other domestic SUVs. However, the machine design was approved and the West-so, in 1978, at the international motor show in Turin LUAZ-969М among the ten best cars of Europe – of course in its class. 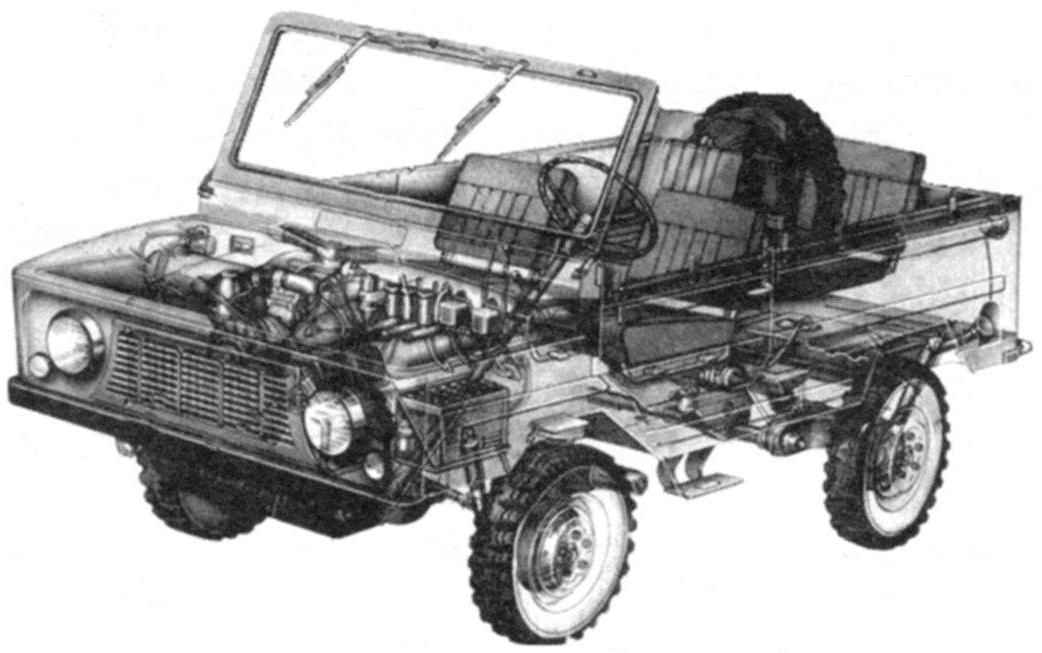 LuAZ-differed 969М truly fantastic maneuverability. Short 1.8-meter wheelbase, decent ground clearance 280 mm, dual and differential lock all made mini-jeep to overcome such abyss and swamp that was not even at the wheels UAZ-469 and “Field”.

22 September 1982, with conveyor Lutsk automobile plant down the one hundred thousandth LUAZ. Despite its utility and some primitive SUV willing to buy in rural areas of our country. In no small part due to the relatively small cost of the machine in 5100 rubles (in prices of 1982) -a little more expensive than the cheapest in the country “Zaporozhets”.

It should be noted that the designers of Lutsk automobile plant has developed many modifications of the mini-jeep. So, in 1990, the plant began production of the LUAZ-1302 with a 53-horsepower four-cylinder inline liquid-cooled engine MeMZ-245 (it is equipped with Zaporizhya Tavriya), based On the machine with this engine was created truck LUAZ-13021, and by the carriage “ambulance” LUAZ-1302-08-top of fiberglass for maintenance of rural first-aid stations and transport people to hospitals. 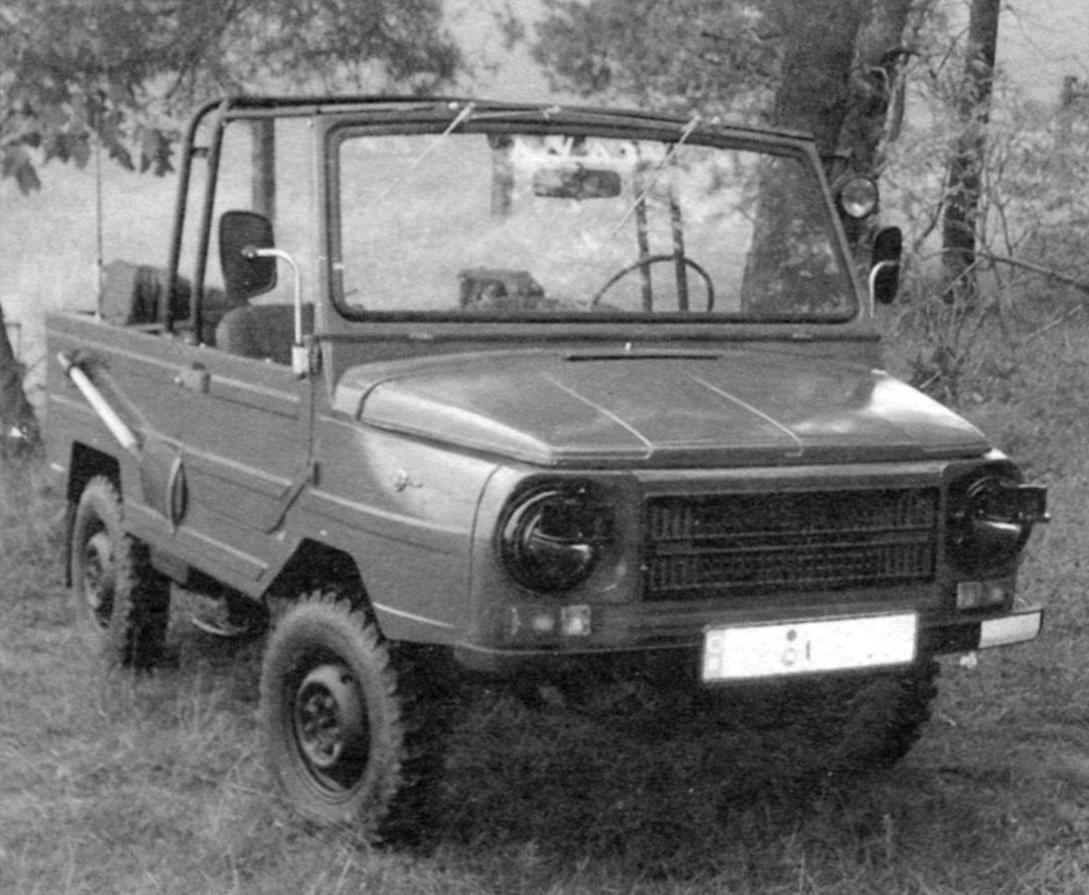 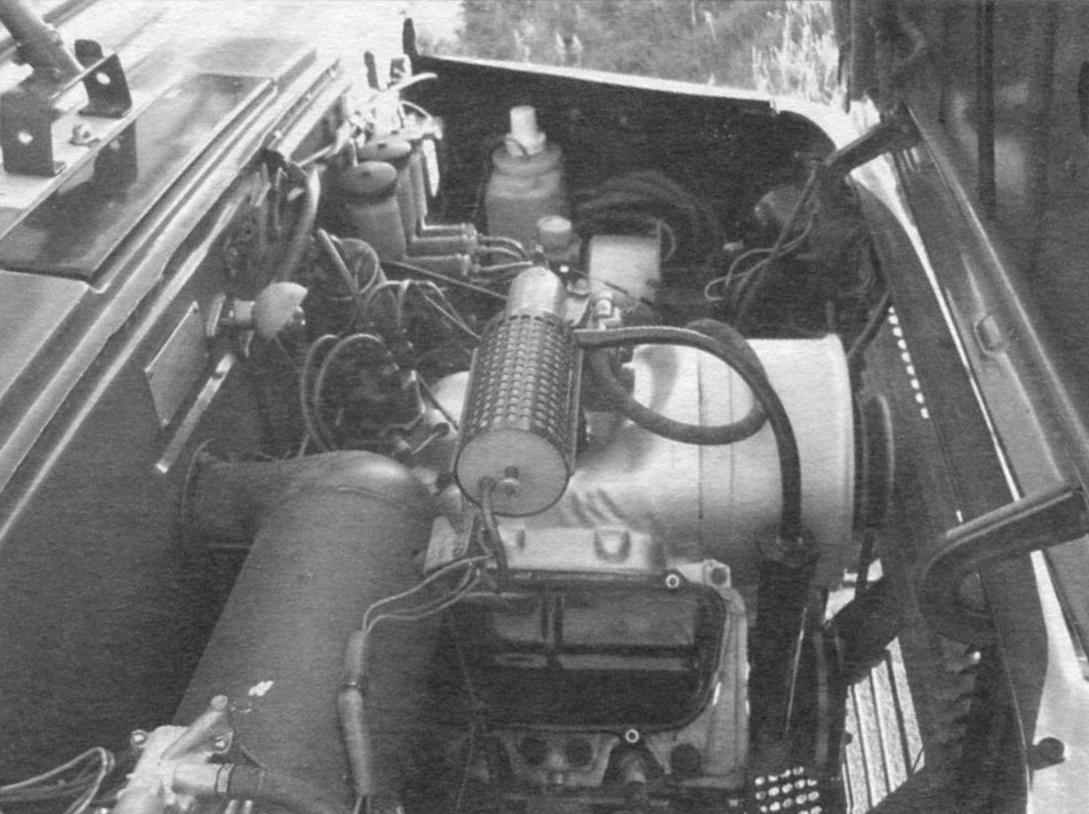 Of great interest the comparison of the two cars-SUVs that are similar in type, size and capacity of the domestic LUAZ-969 and Japanese Suzuki Jimni. Both mini-SUV was released in 1960-ies, both initially equipped with engines of approximately equal power – a little more than 20 HP, but the frame is quite heavy “Japanese” with solid axles, available to date, and had the makings of a great all-terrain LUAZ-969 with the wheel gearboxes and independent suspension was never brought up to competitive status. Currently the car is already out of production. Which is a pity. However, the Lutsk automobile plant has made great efforts to issue on the basis of an SUV with more modern machines, however, the crisis in connection with the collapse of the Soviet Union is not allowed to adjust their production.

In conclusion, it should be noted that LUAZ-969 was a great base car for tuning, and these were not slow to take advantage of Amateur automakers. Today on the roads of the CIS countries you can find a lot of jeeps with suspension from Loiza. The homebrew, as a rule, completely cut off the top part of the serial SUV and instead construct body panels for various cars or fiberglass something more modern and comfortable. On “the ride” off-road vehicles sometimes come across Lazy with homemade original bodies, and handmade with the appearance of “based on”, “Niva”, “Hummer”, “jeep” and other famous monster trucks.