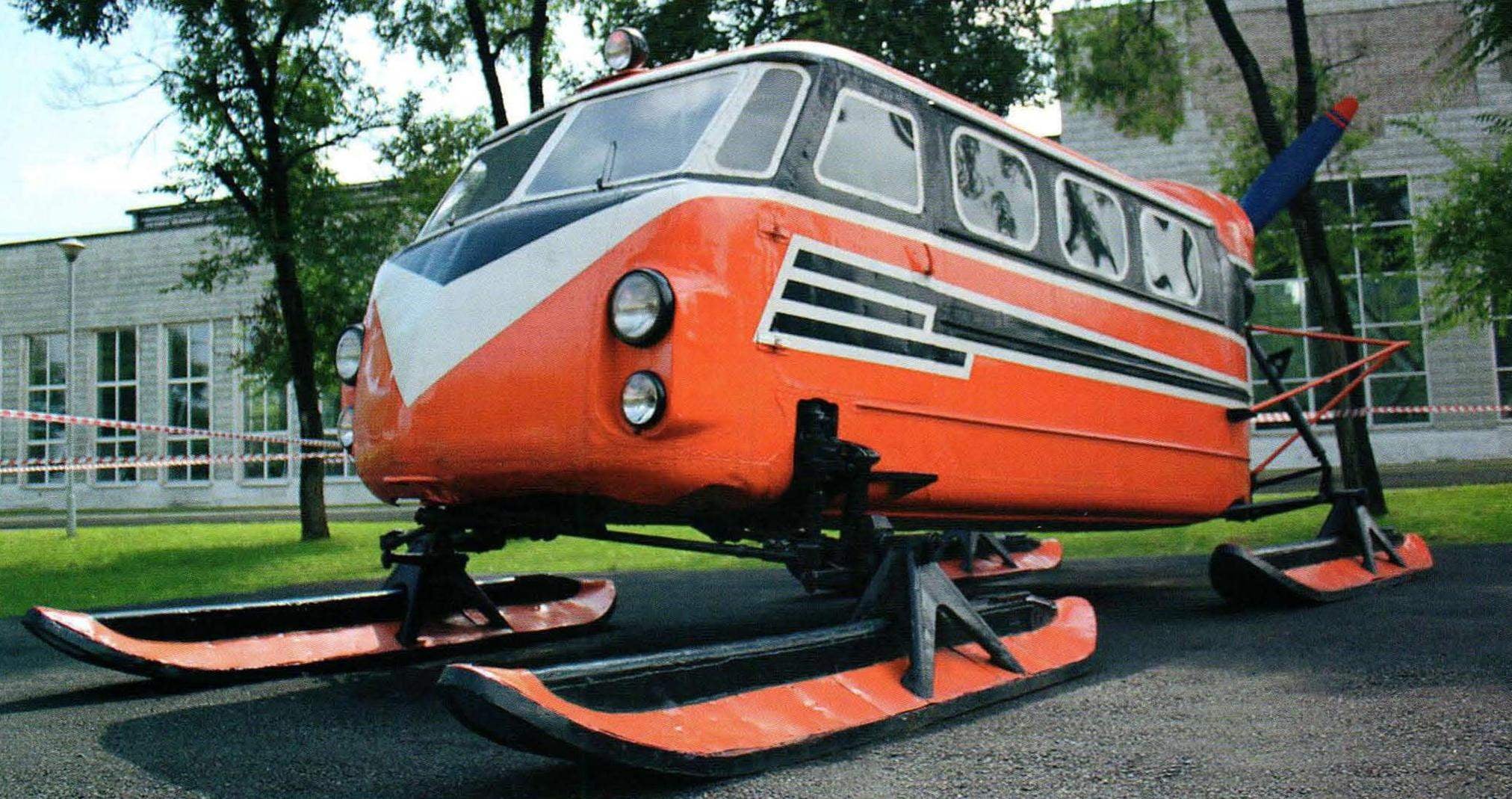 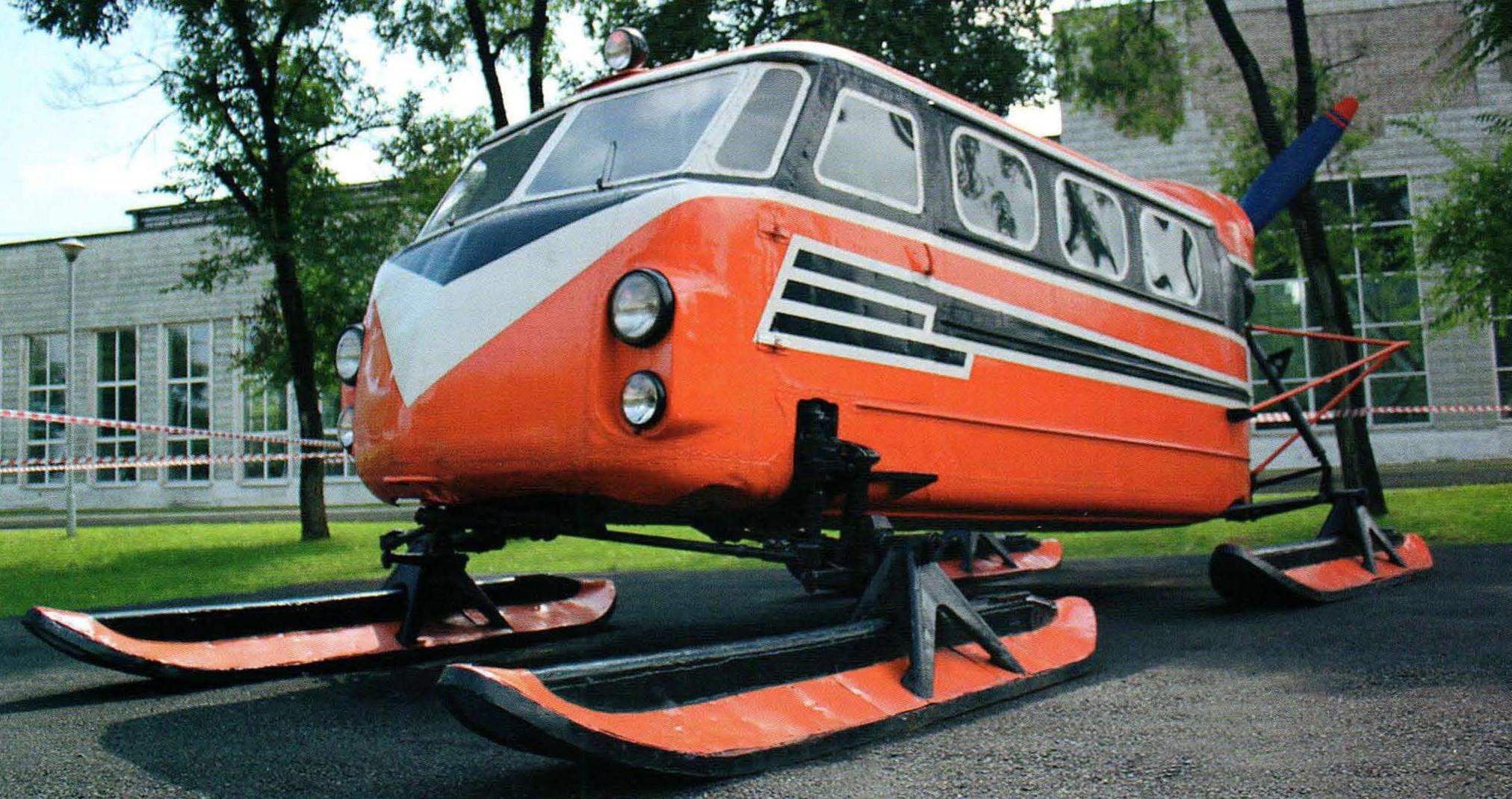 Snowmobile Ka-30. The first test of the snowmobile “North-2”, created in OKB famous designer of helicopters, N.And.Kamov, showed that they have two fatal defect is small capacity and lack of capacity. Not surprisingly -because this snowmobile was created on the basis of the body of a conventional car GAZ-M20 “Victory” and was a vehicle comparable in these parameters with this cars. Therefore, the design Bureau was instructed to develop still, and a 10-seater snowmobile Ka-30 cab high capacity, which according to its characteristics resembled popular in those years is also a 10-seater minibus RAF-977Д “Latvia”.

Preliminary design of large planes, made under the direction of engineer-designer of OKB M. B. Malinowski showed that to create such a snowmobile only by the helicopter impossible. The point, however, moved when in March 1960 to work connected creative professionals in the design and manufacture of snowmobiles I. N. Juvenalia. By the way – the author of the Soviet Union’s textbook on the design of the snowmobile, an active promoter of over-snow vehicles, organizer and leader contests snowmobile technology under the patronage of the magazine “modelist-Konstruktor” and regular author of this publication.

Snowmobile Ka-30 was chetyrehrazovoe vehicle with a unitized body, equipped with a 9-cylinder 260-horsepower radial engine AI-14РС designed by A. G. Ivchenko. The motor was equipped with a built-in gearbox secondary shaft, which was located coaxially with the crankshaft of the engine. Air screw – type AB-79: pushing, three-blade, reversible, with automatic change of the blade pitch.
The body of the snowmobile – dural, riveted. The frame of it consisted of frames and stringers. Base body served as a power floor on which are mounted all other components and assemblies of the snowmobile. In the Central part of the floor along its length held a channel for wiring control cables, electrical cables and piping. 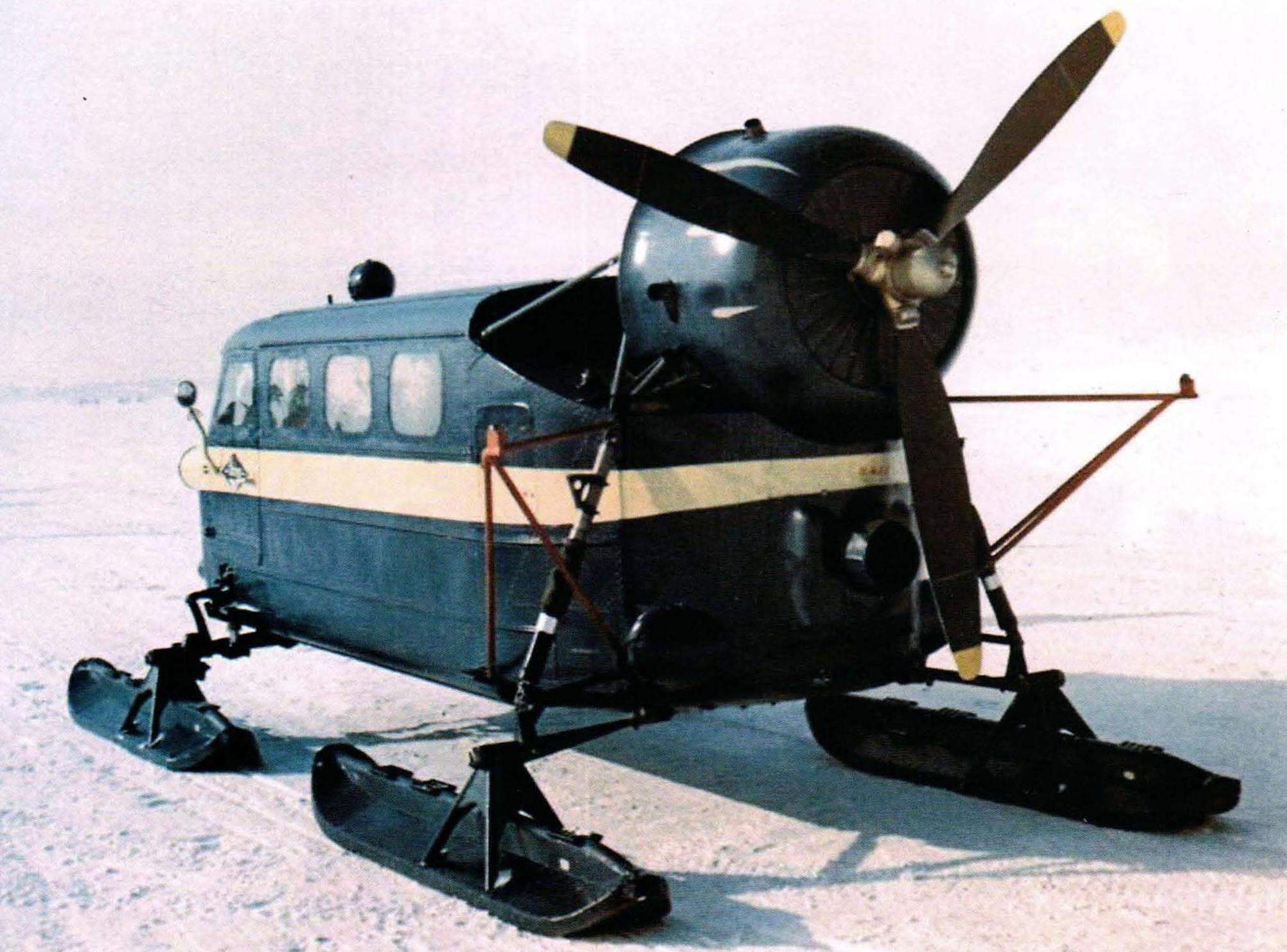 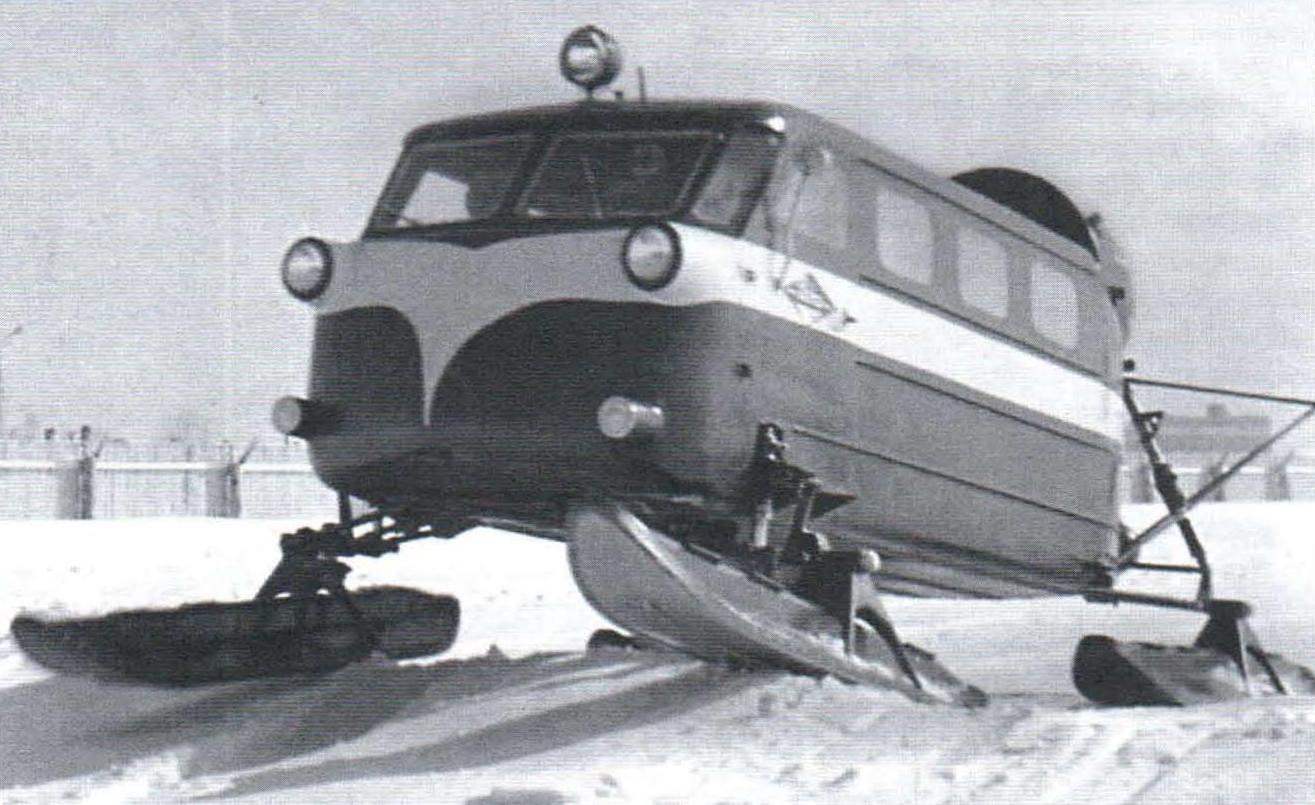 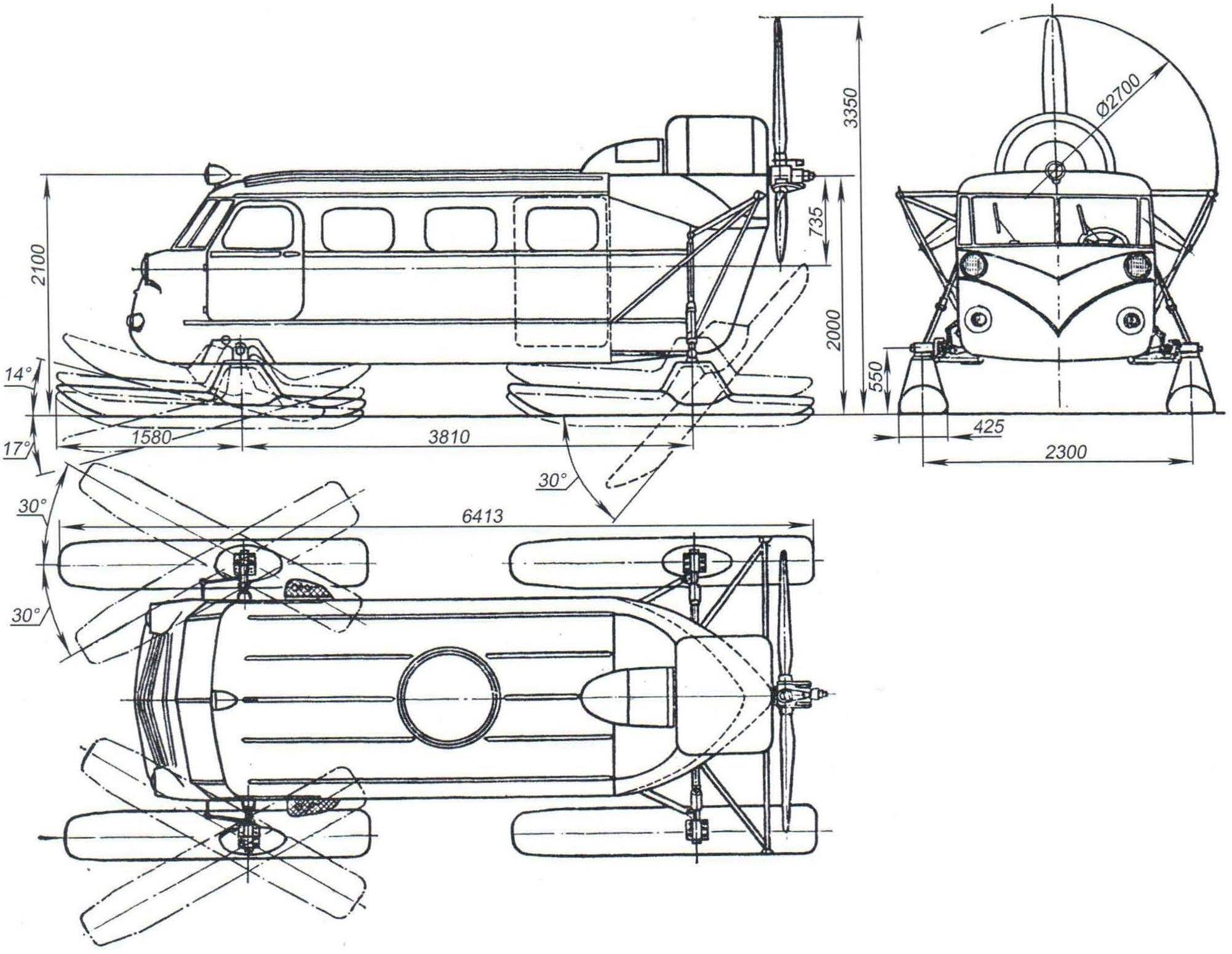 The principal dimensions of snowmobile Ka-30 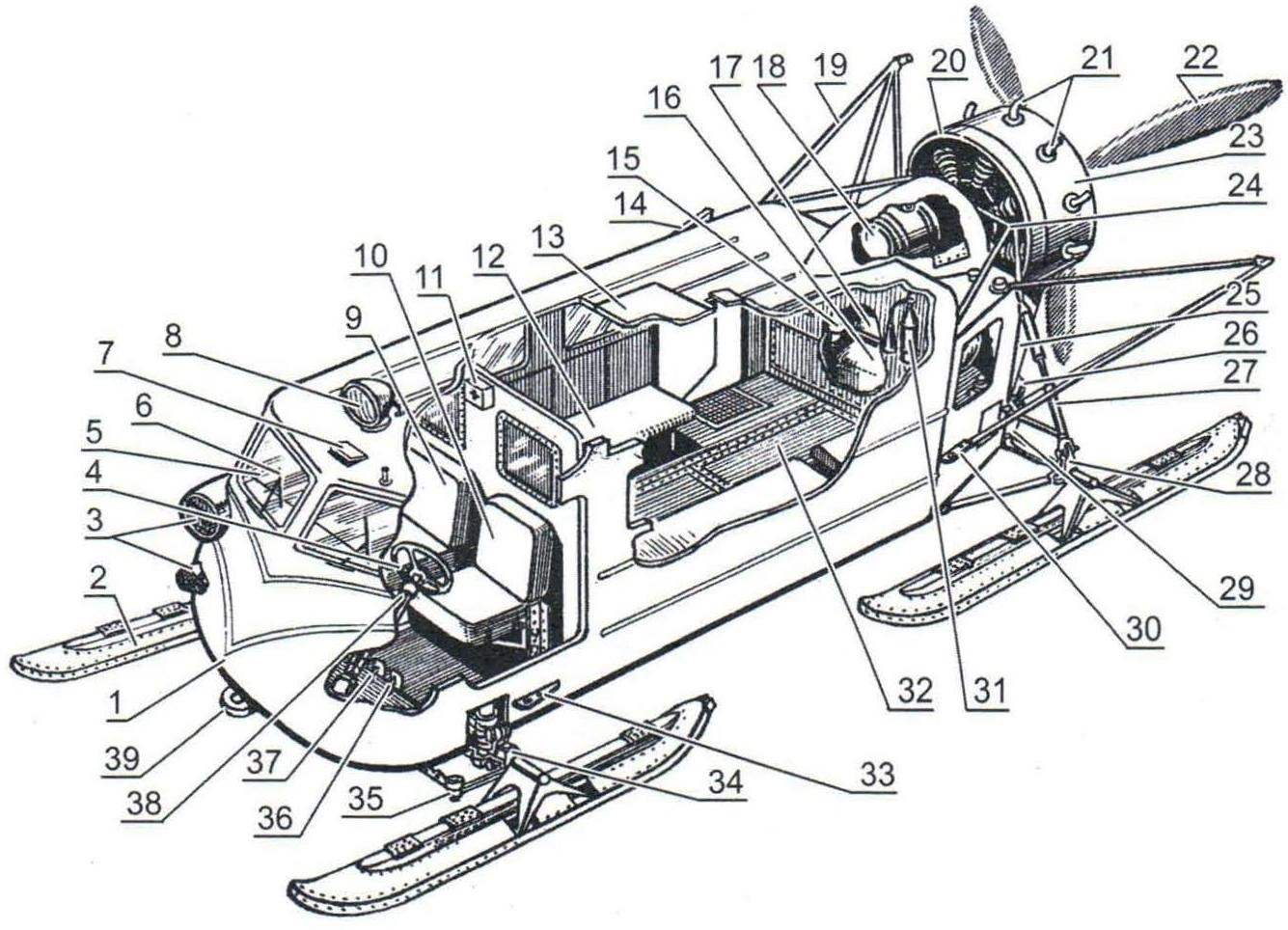 The layout of the snowmobile Ka-30:
1 – housing; 2 – front ski; 3 – the main (top) and fog (bottom) lights; 4 – steering wheel; 5 – a windshield; 6 – a windshield wiper; 7 – vent sash; 8 – spotlight-finder; 9, 10 – seat passenger and driver; 11 – first aid kit; 12 – folding seat; 13 – escape hatch; 14 – door-passenger compartment (right only); 15 – air bottles; 16-the main petrol tank; 17-additional fuel tank; 18-tank; 19-fencing of the propeller; 20 – hood; 21 – exhaust pipes; 22 – air screw; 23 – flap hood; 24 – motor; 25 — back sash; 26 – oil cooler pipe; 27 – strut; 28 – axle shaft; 29 – independent heater (left); 30, 33 – foot pegs; 31 – a fire extinguisher; a 32 – floor panel; 34 – front suspension; 35 – a Pitman arm; 36 pedal reverse; 37 – throttle; 38 – the steering column; 39 – towing bracket
The body of the snowmobile consisted of three compartments. In the front representing the two-door cab housed the machine controls, monitoring devices operation rotor installation seat the driver and mechanic, as well as Autonomous heating system. On the front the front of the cabin were installed the main and fog lights, and on the roof – spotlight-seeker with control from the cockpit. Under the V-shaped windscreen was located in the dashboard of the car and the fuse box, and the right of the driver air remote.
The Central (cargo) compartment net capacity of 5.5 m3 was designed to accommodate passengers and cargo, for which there were folding seats and mooring equipment. To the right in the direction of motion was located the only door, which allows you to load in the compartment even 200-liter barrels. In the roof of the compartment was provided an escape hatch.
Finally, in the rear compartment housed two fuel tanks, batteries, and units of air and oil systems.
The engine AI-14РС was installed in the upper part of the rear engine compartment on the farm; the latter by means of struts fixed on the power nodes located on the outer casing body and connected with the frame body of the snowmobile.
The engine was covered with a hood, designed to organize passage of the air flow admitted to the engine compartment to cool the cylinders. The hood consisted of front and rear fixed rings and legkookisljajushchihsja folds. Front ring with an expanded entry, rear – folding shutters, which regulated the temperature of the engine.
The engine compartment was divided by a horizontal bulkhead in the lower part thereof on the lodgment is established the main gas tank, and the top – optional. On the hull upper sloping compartment was fixed to the cradle and the base of the cowling, oil tank – the last was recorded on this tape. The engine compartment was located piping and control cables.
Suspension Ka-30 consisted of suspension and four interchangeable skis. Front – driven, and the elements of the steering system was borrowed from the truck ZIL-164. 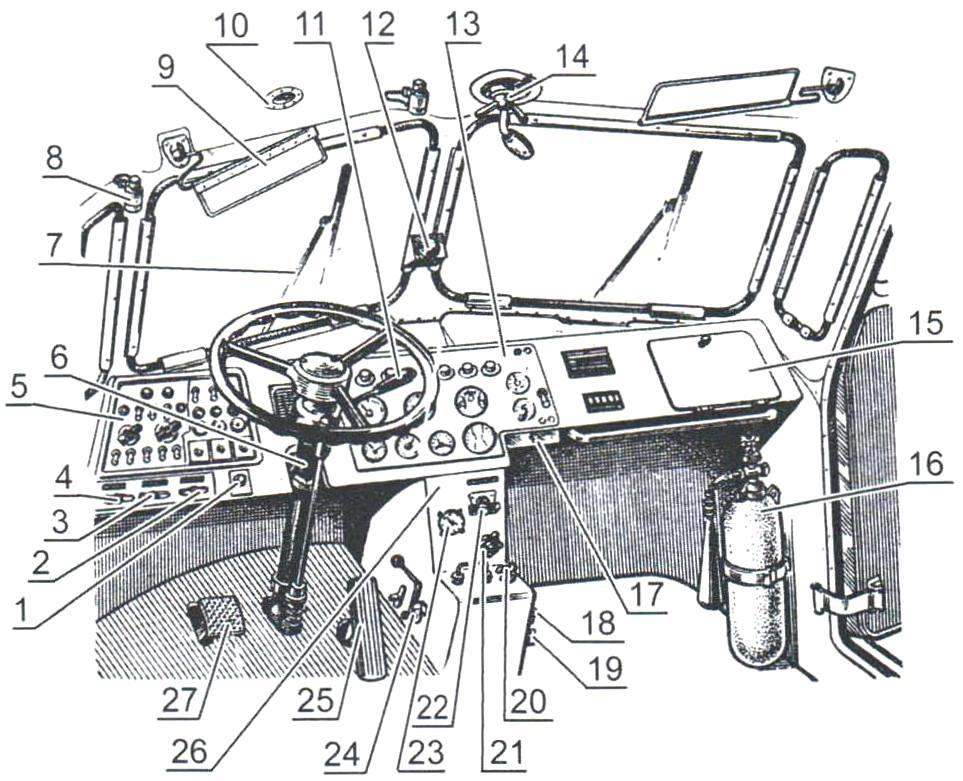 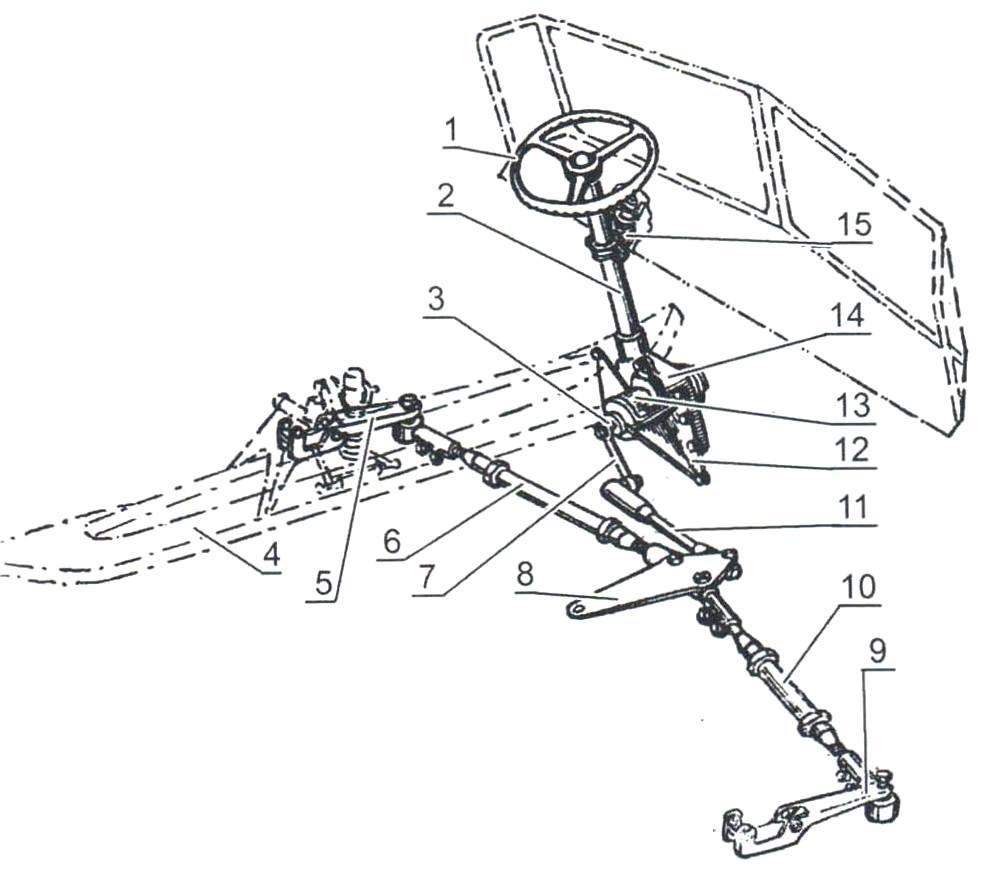 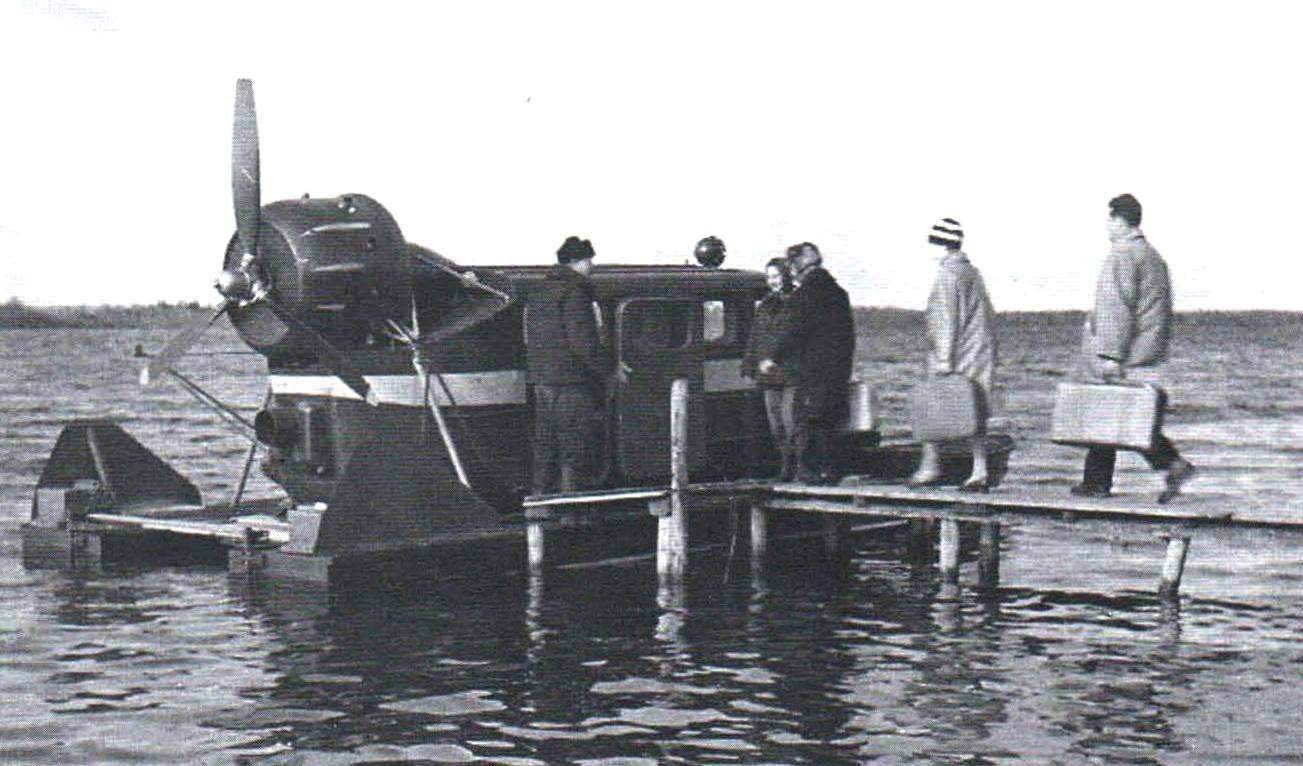 Summer version of the snowmobile – river aerocamera
The first production snowmobile was equipped with a welded metal skis that do not have good performance -they were frozen to the snow, ill walked on the wet crust at zero temperature, and with difficulty moved by so-called “abrasive” snow at a temperature of about -50 degrees. In the experimental procedure for the Ka-30 was created of fiberglass skis with soles made of Teflon (PTFE) with which the snowmobile is freely moved at any temperature and duration of Parking as well as easily slip on the wet and “abrasive” snow. The speed of the Ka-30 increased by 25 – 30 percent, and the online skis increased from 7000 to 35 000 km.
In December 1961, the design Bureau has made the layout and completed the draft design of the Ka-30, after which the mock-up Commission signed the acceptance report and recommended that the start of snowmobile production. At first, it was decided to produce a small series, so that when operation of these machines more fully to identify their weaknesses and quickly make drawings of the necessary changes. Mass production snowmobiles have been deployed in the city of Arsenyev plant “Progress”.
In December 1962, the plant produced the first six snowmobiles – one car entered for the static tests, two were sent to Yakutsk and three in Komsomolsk-on-Amur. After the trial operation of the Ka-30 was finalized and by the end of 1964, the plant “Progress” has produced 28 of the snowmobile. In the future, Ka-30 produced by Almassadam – 25 – 30 cars per year.
We should also mention of successful summer operation of snowmobiles, which are equipped with a pair of floats and a steering device, transforming them into a commercial catamaran. River aeroastro was tested in the fall of 1965, however, the speed was insufficient. Had designers to install on a catamaran, more powerful engine M-14.
Snowmobile Ka-30 has been successfully used by postmen and geologists, oil and gas, as well as the staff of the Ministry of internal Affairs until the beginning of 1970-ies. Latest Ka-30 was released in 1973 and the following year they stopped making spare parts. However, the lack of spare parts do not become a barrier to the use of snowmobiles – the latest Ka-30 were in regular operation until the early 1990-ies. All in all, it produced 350 snowmobile Ka-30. To the present day preserved only some of their instances, as well as river aroustamyan.