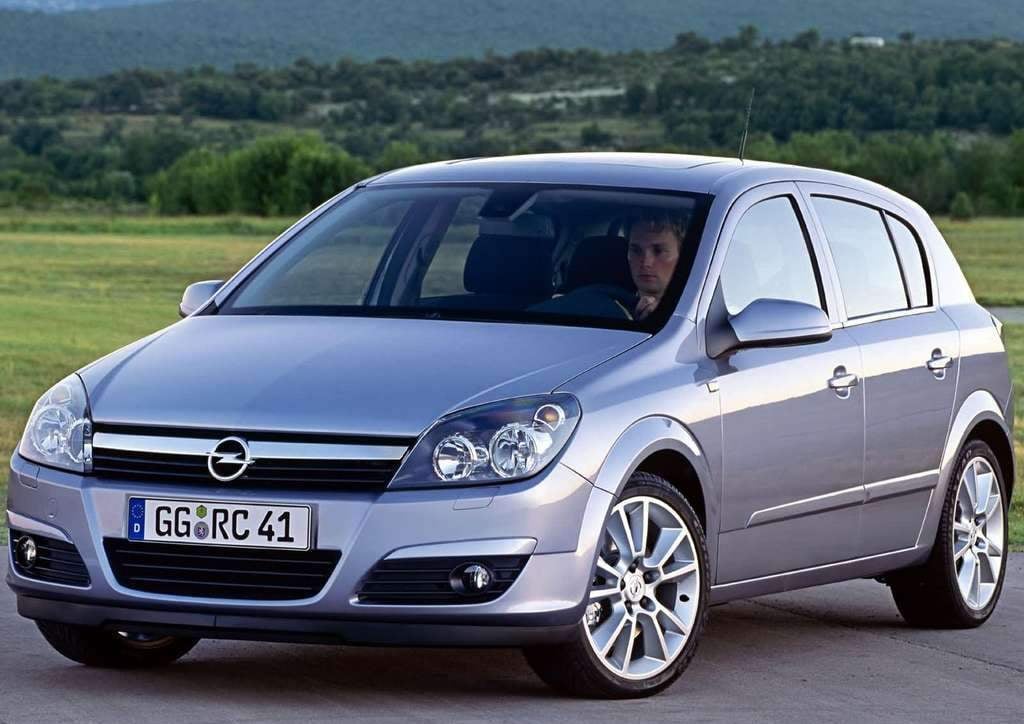 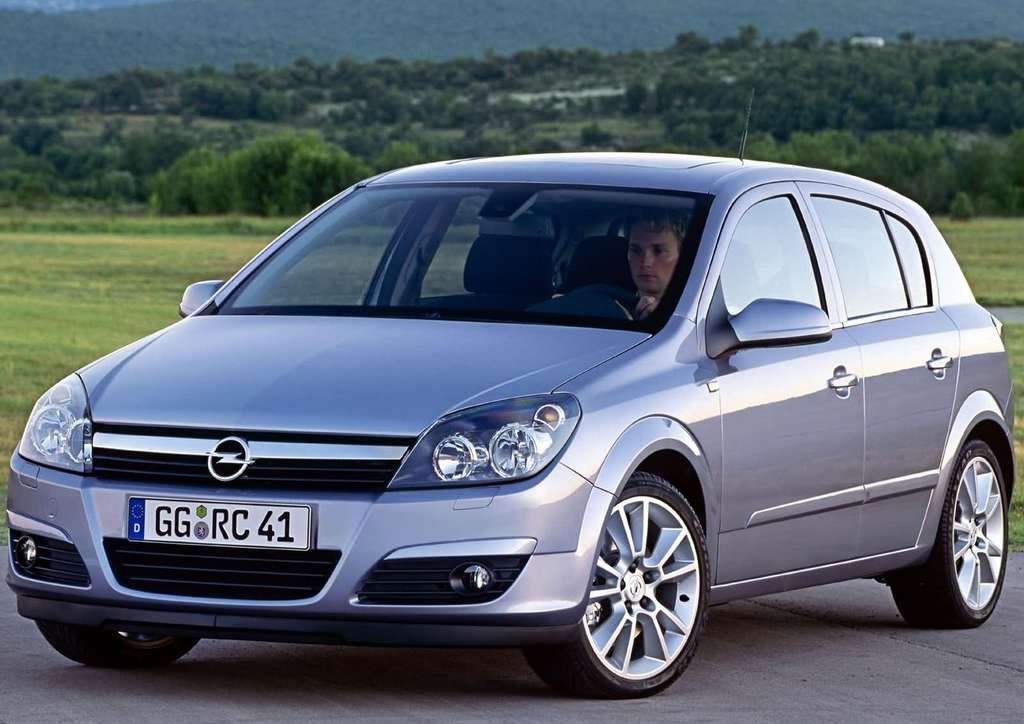 Golf car class, OPEL ASTRA. Competition has always been considered the engine of progress, including in the automotive industry. Vehicle manufacturers all by hook or by crook tried to stay ahead of the competitor and the price of the product and its quality. Well, won in such cases the consumer, resulting in less expensive and higher quality car.
Car company Volkswagen and Adam Opel have always been competitors. The car company Opel has traditionally attracted buyers lower price, and the cars of concern Volkswagen is a high quality. Over time, the position of the firm Opel, all the more strengthened, because “foreign cars” more rapidly growing price and OPEL cars.
That the OPEL ASTRA has finally managed to oust the perennial podium competitor the VW GOLF, the statistics claim that the number of orders for the car of a Golf class of firm Opel exceeded the same indicator for a vehicle of the same class of Volkswagen.
Few people remember that the concept of “compact car” was first used by firm Opel in relation to the predecessor of today’s Astra — OPEL KADETT release in 1962. Its parameters this machine can be attributed to non-existent in the Golf class, named with the advent of the 1974 VW GOLF.
KADETT, repeatedly modernizirovanniy and produced in several modifications, remained in production program of the firm until 1991. It was replaced by a new generation of front wheel drive cars OPEL ASTRA (the name, by the way, for several years was used for the English “cadets”, produced by Vauxhall). OPEL ASTRA’s first generation was quite modern, but their reliability was not too high. Left much to be desired and rigidity. However, like its corrosion resistance. However, all this did not prevent OPEL ASTRA to compete with the leader of the market — VW GOLF. 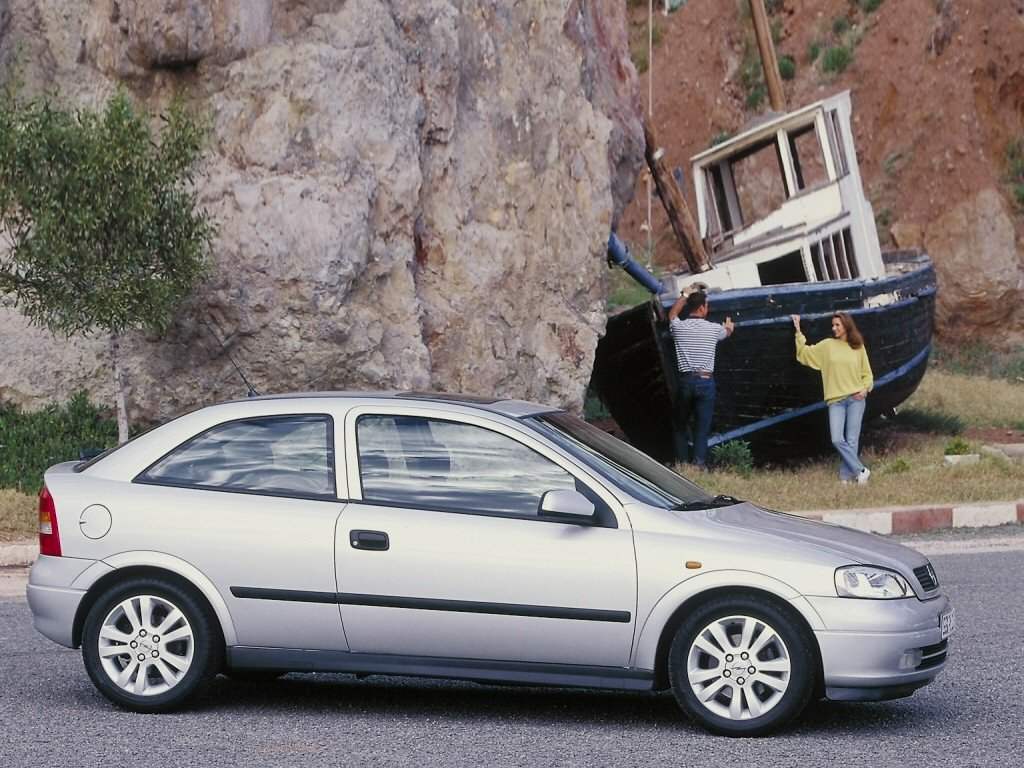 The compact car OPEL ASTRA release 1998
In 1998, a new generation of cars ASTRA body type hatchback (three – and five-door) sedan and wagon. It was a completely different car — more reliable and guaranteed corrosion resistance of the body they have reached 12 years!
It has a ASTRA body type convertible and coupe, production of which was established at the company Bertone. Each of the body modifications was produced with petrol 16-valve engines 1.2 l (75 HP), 1.4 l (90 HP), 1.6 (101 HP), 1.8 liter (125 HP), 2.2 l (147 HP) and diesel 1.7 liters (75 HP), 2.0 l (82-101 PS).
It should be noted that with the emergence in 2004 of a new sedan of OPEL ASTRA of the previous generation is still in the production program of the company. Moreover, with the discontinuation of this car in Western Europe the build of this car is planned in Russia.
OPEL ASTRA release in 2004 is the first car designed under the supervision of the new head of the company Adam Opel, Peter Forster, who joined the firm in 2001. The management of concern General Motors, which, in fact, belongs to the Opel, was concerned with the optimization of the process of development of compact cars. P. Forster had to make a choice between the long process of developing fundamentally new platforms for the new OPEL ASTRA and the creation of a car using some of the existing nodes. The last way promised a substantial reduction of time and costs for design — the fact that the new OPEL planned to release simultaneously with the closest competitor — the VW GOLF V. 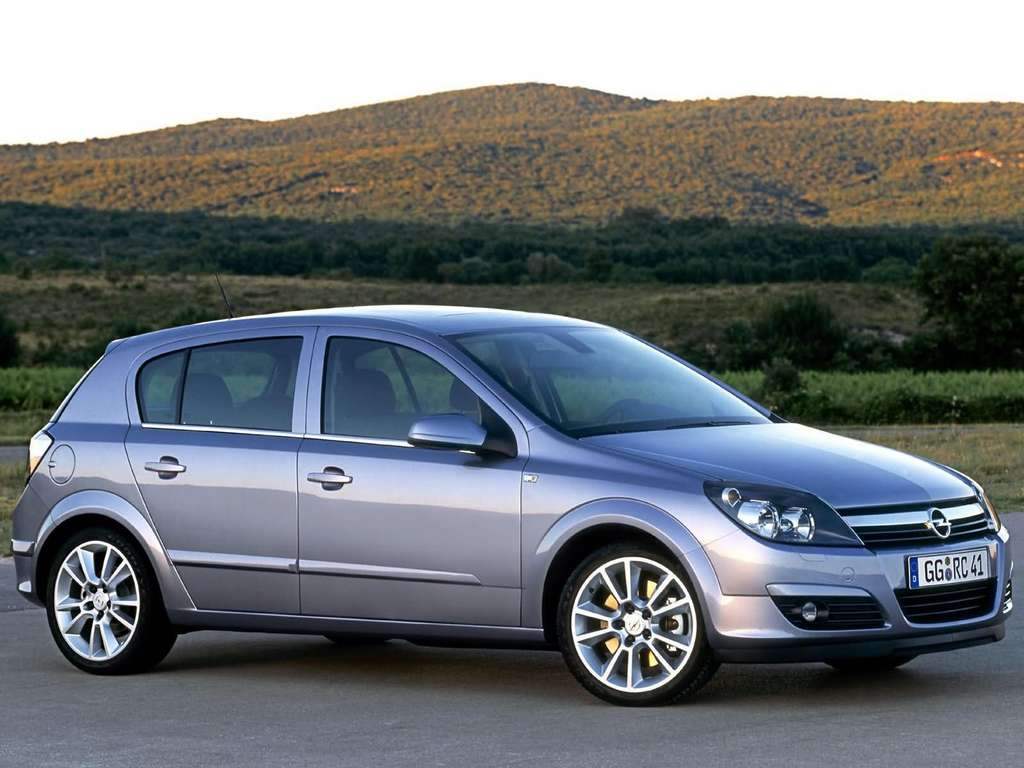 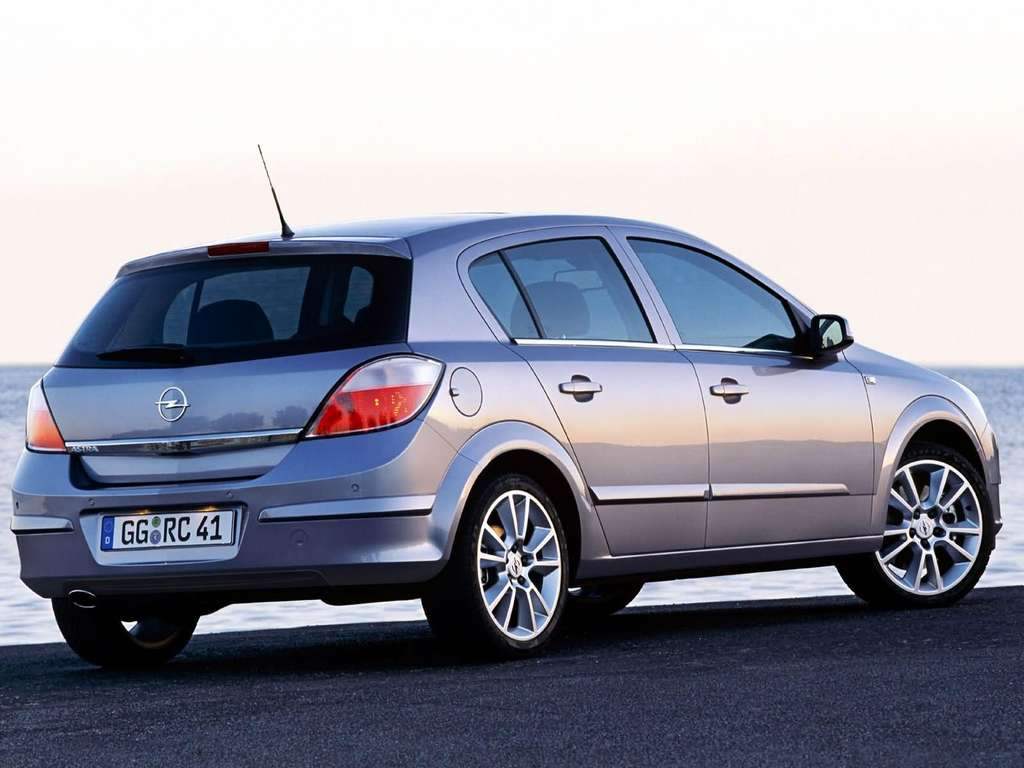 OPEL ASTRA edition 2004
The suspension of the new car remained the same as the previous generation model: front type McPherson, rear semi-dependent, torsion beam. However, almost all of its parts and components were designed from scratch. At the same engineers managed to upgrade it so that now it is not inferior to modern multi-link designs. The well developed design of the torsion beams and the special technology of welding guarantees, according to testers, the handling of the new car level cars with multi-link rear suspension. Moreover, in conditions of intense exploitation of the crossbeam with U-shaped profile at the rear axle has proved itself as a reliable node.
The car is equipped with an interactive control system IDS (Interactive Driving System). It includes traction control ESP, anti-lock brakes ABS, emergency braking system and CBS, which controls the process of braking in turn. When you press the Sport button change the settings of the electro-hydraulic power steering also becomes more vigorous response of the engine to the movement of the pedal “gas”. On customer request the car can be equipped with a set of ADS Plus, which you can use to change the suspension setting on “sport” — much tougher.

The geometric scheme of the car OPEL ASTRA 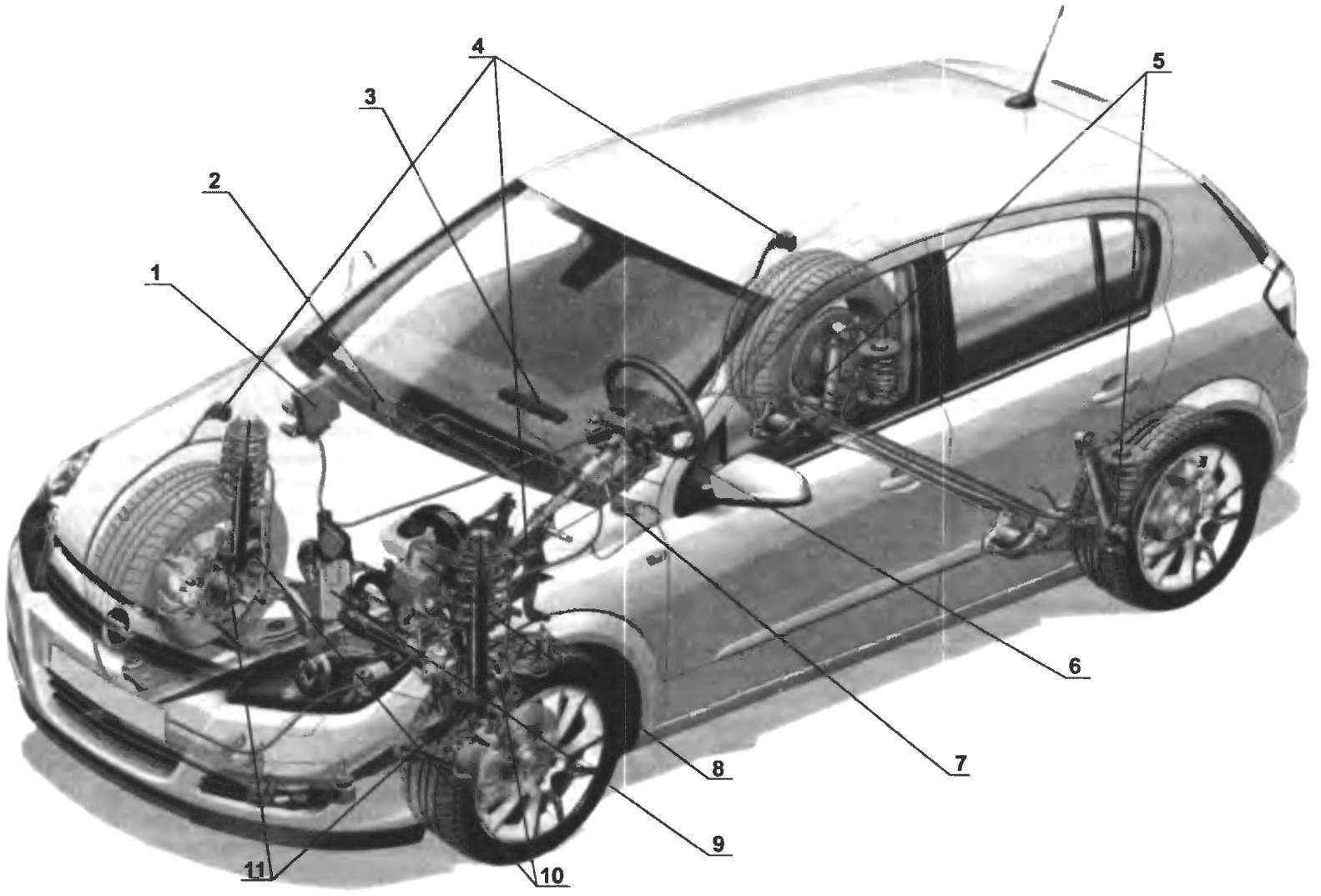 The adaptive chassis of the OPEL ASTRA:
1 — system controller CDC, determines whether the damping and sends a signal to the control valves; 2—TMPS system controller that monitors the air pressure in the wheels and warn the driver about the reduction in their pressure; 3— the SPORT button which, when pressed, turns on the sports chassis tuning; 4 sensors vertical acceleration of the body; 5— valves control system of the CDC, regulates the stiffness of the hydraulic dampers; 6— sensor of the steering wheel that determines its angle of rotation, and a can Bus interface serving as a link between high speed and standard information of the tires; 7 — sensor for acceleration and yaw rate, which measures the vertical movement of the vehicle and its lateral acceleration; 8 — the controller of the ESP system that controls all functions of the system ESP Plus, including selective braking and reducing fuel supply; 9 — unit EHPS system, the control characteristics of the electrohydraulic amplifier; 10 — control valves system, CDC, governing the stiffness of the hydraulic dampers; 11 — the acceleration sensors of the wheels, measuring their vertical movement
The new machine will come with a whole range of engines. However, the most popular for OPEL ASTRA will most likely be the 1.6-litre petrol engine capacity of 105 HP, created using Twinport technology, providing substantial fuel savings. Thus, the fuel consumption in the urban cycle drive the new vehicle is reduced by approximately one liter compared to the old. In addition, cars with this engine are equipped with branded box-type semi-automatic Easytronic.
Lower fuel consumption contributes to the optimum aerodynamics of the body — the designers managed to create a car with the best Golf-class drag coefficient CX = 0,32.
The body of the new machine is designed more rigid than the car’s predecessor: its rigidity in the longitudinal bending increased by 52 percent. 15 percent increased torsional stiffness, which is responsible for the accuracy of the settings of the chassis, respectively, at the vehicle’s handling. It should be noted that all these parameters improved not by increasing body weight, but mainly due to the use in the design of light alloys.
When creating exterior designers paid a lot of attention to improve its maintainability. Thus, the front, the most suffering in the accident part of the body of the new OPEL ASTRA now consists of three elements, which allows, if necessary, to change or to restore only one small panel and not the entire front part. By the way, the same principle used in the design and other parts of the vehicle. In particular, the headlight brackets, fastened with screws, if the damage can be changed, while maintaining the old unit. And such examples in the design of the machine a lot. 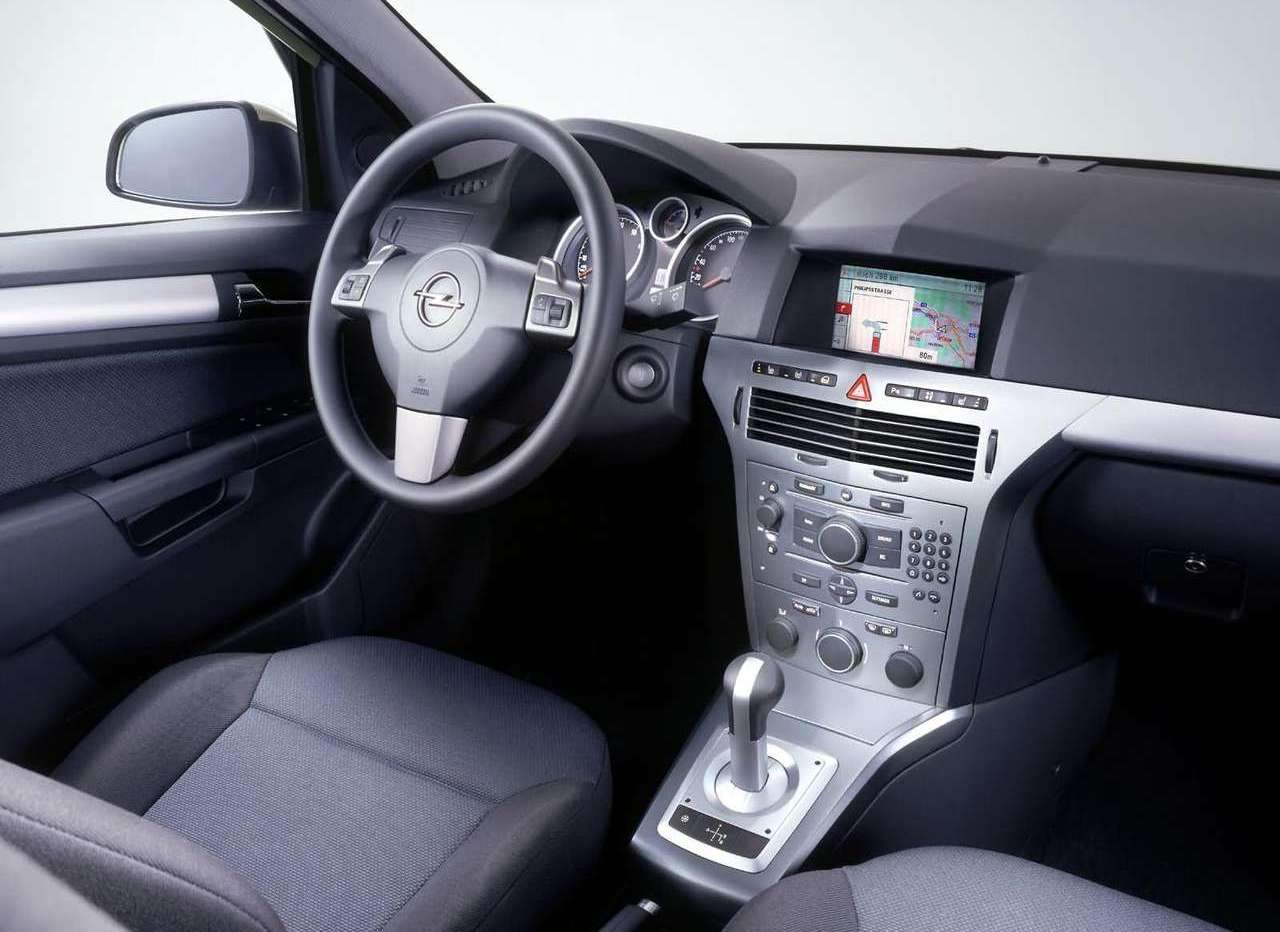 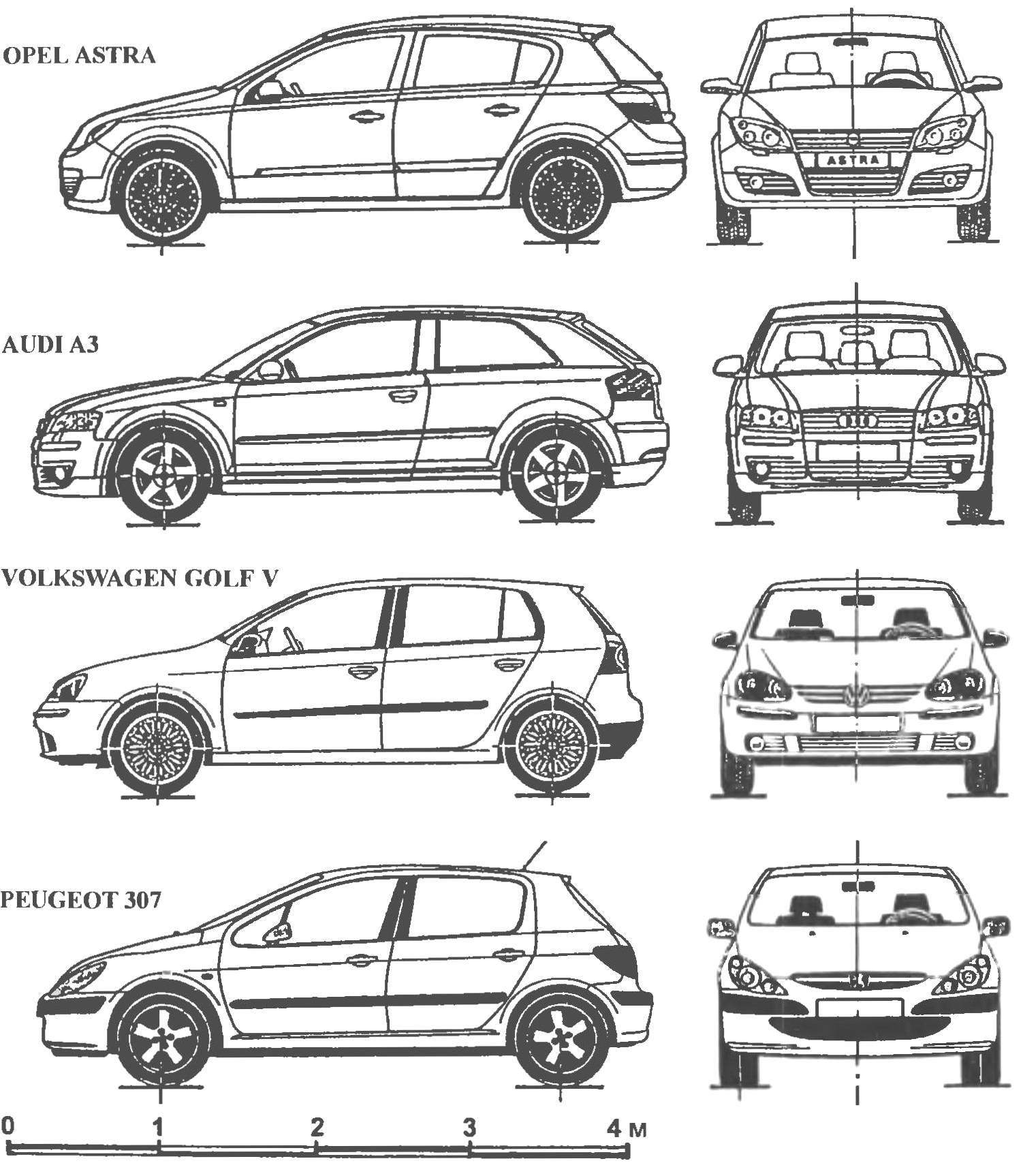 Comparative scheme of modern cars of a Golf class
The appearance of the car both conservative and original. The coincidence of the contours of the body of its main competitors, in particular the VW GOLF, PEUGEOT 307, AUDI AZ and OPEL ASTRA, the latter compares favorably’t as many memorable parts as the final design. The stylistic elements of the front of the car experts believe the chrome cross-bar radiator grille with located on it a logo and separate head optics, which are located behind clear glass covers almond shape.
The new ASTRA looks like a compact car but inside the car is spacious enough even when riding five of them. The steering wheel is of small diameter with a fairly thick rim has adjustment in all directions. On the steering wheel are audio control buttons, on-Board computer and navigation system. A simple and functional instrument panel has three round dials — speedometer, tachometer and fuel gauge. On the left is the control unit lights. Incidentally, the latter can be controlled is installed at the customer system AFL (Adaptive Forvard Light), changing the direction of light of headlights depending on the angle of the steering wheel.
Technical characteristics of family car OPEL ASTRA release in 2004 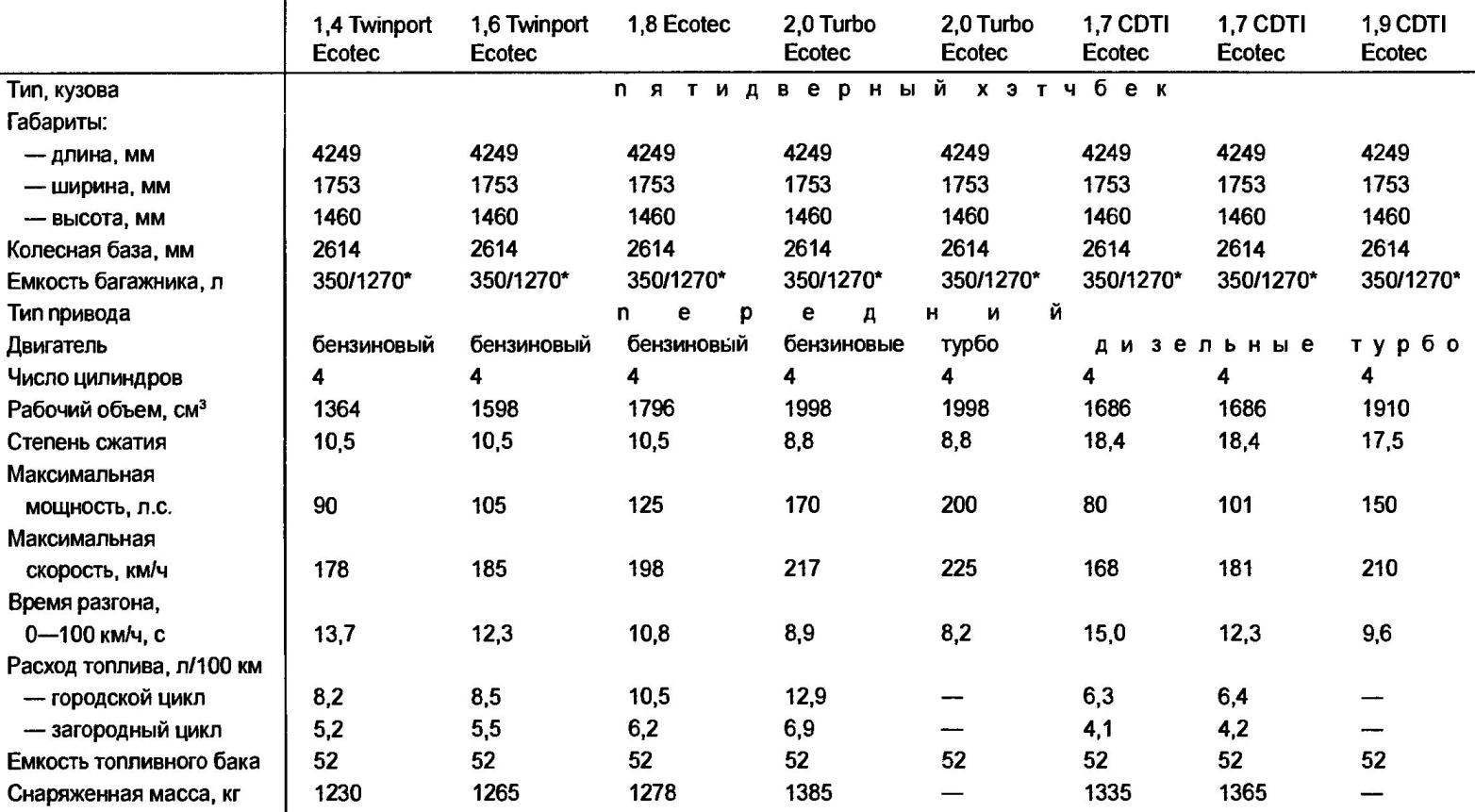 New technical solutions used in the OPEL ASTRA release in 2004:
— automatic switching on dipped beam;
— new petrol engines are created with Twinport technology, and the new generation of turbodiesels with fuel supply system Common Rail;
— the entertainment-information complex digital encoding of the audio, a navigation system and integrated phone with voice control;
— system of quick windscreen heater Quickheat;
— side airbags with additional protection of the hip joint;
— the access system Open&Start;
— system Twin Audio, which allows passengers to listen to music independently from each other;
—remote adjustment of shock absorbers;
— the rear lights, made by “translucent” technology;
— the trailer stabilisation system TSP;
—control system of air pressure in the tires TPMS;
— warning system about the fall of the air pressure in the tire;
— transmission Easytronic;
— key control systems of the car on the steering wheel;
— adaptive chassis IDS Plus with the system of adjustment of rigidity of shock-absorbers;
— control system for the demolition of the front axle UCL;
— help system when starting on the rise HSA;
— information CAN-Bus;
— control system turn signal headlight AFL
Buyers would be happy to meet a new product, which is equipped with OPEL ASTRA 2004 — the system HSA (Hill Start Assist). It comes into effect when the car is stopped on the rise Before driving, after the driver release the brake pedal, electronics HSA another fifteen seconds to maintain pressure in the braking system — this time is enough to release the clutch pedal and add “gas”. When pulling away the brake system pressure is immediately reset.
Graciously includes owners OPEL ASTRA and for such a useful device, as an indicator for tyre pressure, part of the same package as the system HSA, and the system of monitoring the state of the battery, which independently turns off power-hungry consumers in the fall of battery level.
Not so long ago the main advantage of the compact car company Adam Opel was lower than the nearest competitor, the price And lower the quality of these machines was considered quite a normal price to pay for cheapness. However, with the advent in 1998 of the new generation OPEL ASTRA, the situation has changed — these cars while maintaining a price gap with competitors-classmates have become more reliable, more secure and more comfortable it Seems, the final breakthrough to the leaders of the Golf class completes the stylish and dynamic the ASTRA release in 2004.
I. EVSTRATOV