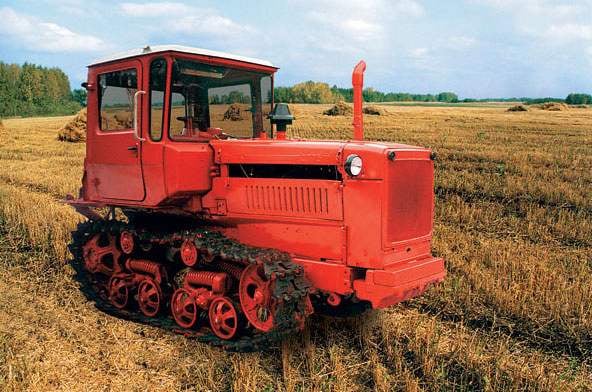 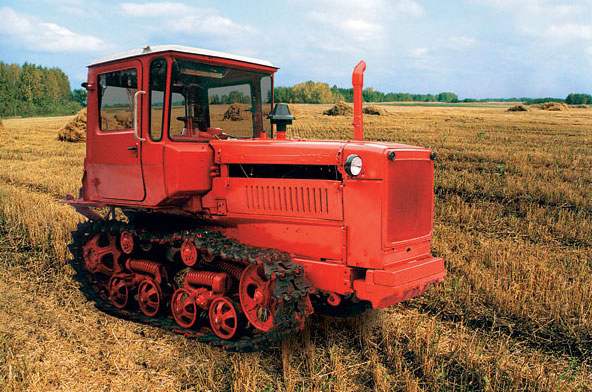 At the beginning of this year from the conveyor Volgograd tractor plant named after F. E. Dzerzhinsky descended the two millionth car. This work gift of Volgograd rural operators, their contribution to the implementation of the Food program in our country. Machines with the brand of VGTZ can be found in the USSR and abroad. Forty percent of all arable tractors, sent to the village, made in Volgograd. Their excellent driving quality, simplicity in work was praised by farmers. The same age as the first five years, the world’s largest tractor plant built in unprecedentedly short time — 11 months. In June 1930 with its main Assembly line produced the first tractor STZ-1. For four years, was released whiter than a hundred thousand of these machines. Soon in the shops of the Stalingrad tractor turned wide competition for the acquisition of new equipment. The experience of his organization picked up and other engineering plants.
Achievements of VGTZ award-winning homeland. Four order on the banner of the plant is the high rating of the party and government, labor and military feats of the tractor. The design of the machines manufactured by them, are constantly being improved. To create new models, which in the near future will become the main products of the plant. Among them DT-75C, which is looking forward in the farms, crawler tractor with engine capacity of 170 HP and automatic transmission.
In creating the DT-75C actively participated members of the Komsomol of the plant, young inventors and innovators. Half of the works related to the design and manufacture of prototypes made factory youth. It participates in the modernization of many components and parts for new machines, tested in the fields. Komsomol members help collect DT-75C in the experimental shop.
The need for a new machine is dictated by the urgent task of improving the performance arable tractors, to increase their saturation, improve the working conditions of machine operators. The designers tried to keep the dignity of the Volgograd machines and eliminating their disadvantages, to ensure production continuity. While great attention was given to harmonization of DT-75C basic models manufactured at the plant. The prototypes underwent extensive field trials. They showed that the tractor successfully works on sites with varying soil structure, especially challenging for plowing, and one DT-75C can replace the two machines of the old sample. In result, saves labor, increases productivity. The field crop flatteringly about DT-75C, noting its high productivity and good working conditions. He not only tills and cultivates the soil, but can be used in irrigated agriculture, at harvesting, transportation of fertilizers. The tractor is adapted for operation with more than 70 mounted and trailed units. 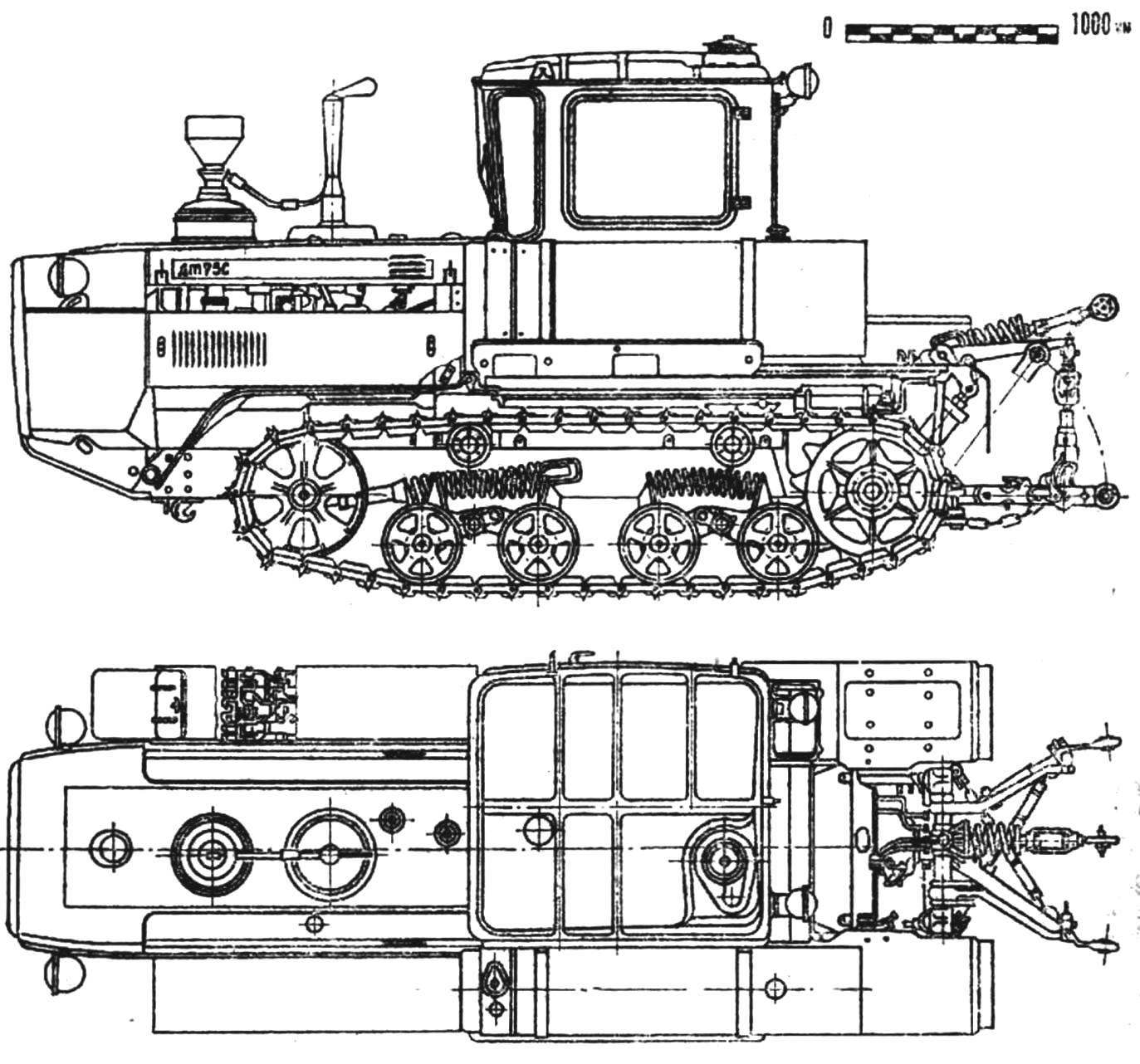 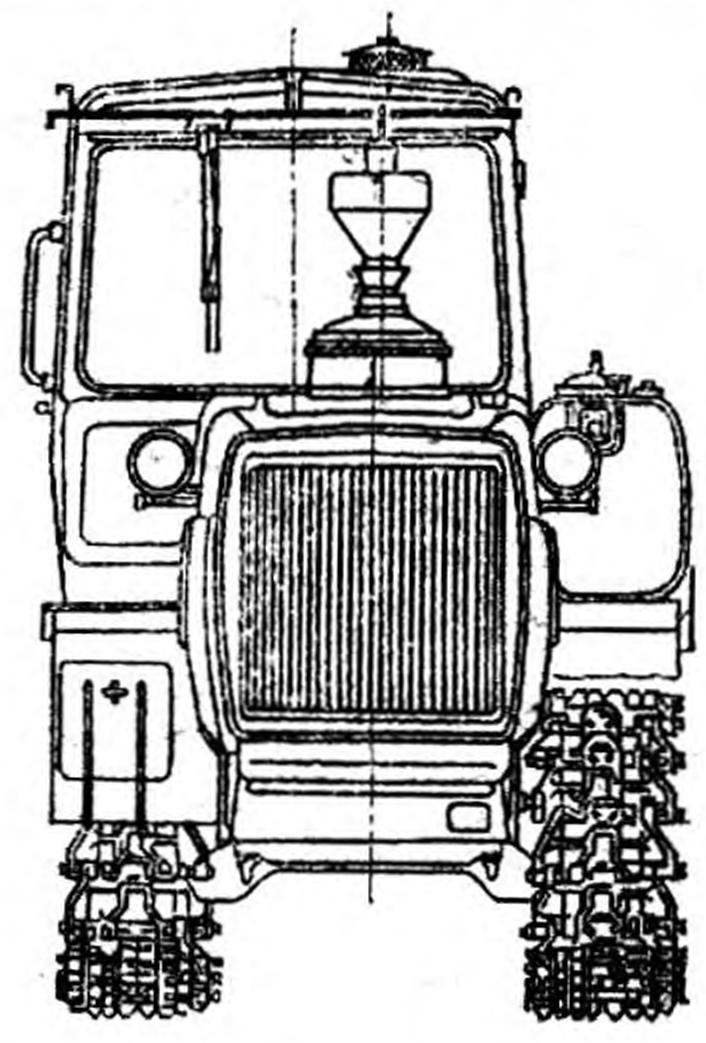 Crawler tractor DT-75C.
The “highlight” of the design — hydrotransmission, greatly facilitates the tractor the machine. He does not need to frequently shift gears in the course of ploughing or harrowing. Using the torque Converter speed is regulated automatically depending on changes in tractive effort. The result is longer engine life, and his constant high load not depends on the skill of the driver. Thanks to hydraulic transmissions-DT-75C only two main transfer allowing to reach the speed of 22 km/h Some modifications homenethelp equipped with two additional technological programs. They are needed in irrigation of crops, when the speed of movement of the machine should be minimal, as the farmers call it, “creeping”.
Developing DT-75C, the designers paid special attention to the improvement of working conditions of the driver. Its cabin is pressurized and Soundproofed well. Even when the engine is running it is possible to talk without raising his voice. A good overview and ventilation create additional convenience for the tractor. In the heat of the evaporation type air conditioning cools and humidifies the air in the cabin.
New durable caterpillar DT-75C will significantly reduce the amount of metal required to manufacture them. In addition, the less you will need spare parts to replace worn out trucks. More economical will be the engine of this machine, reduced consumption of fuel and lubricants. 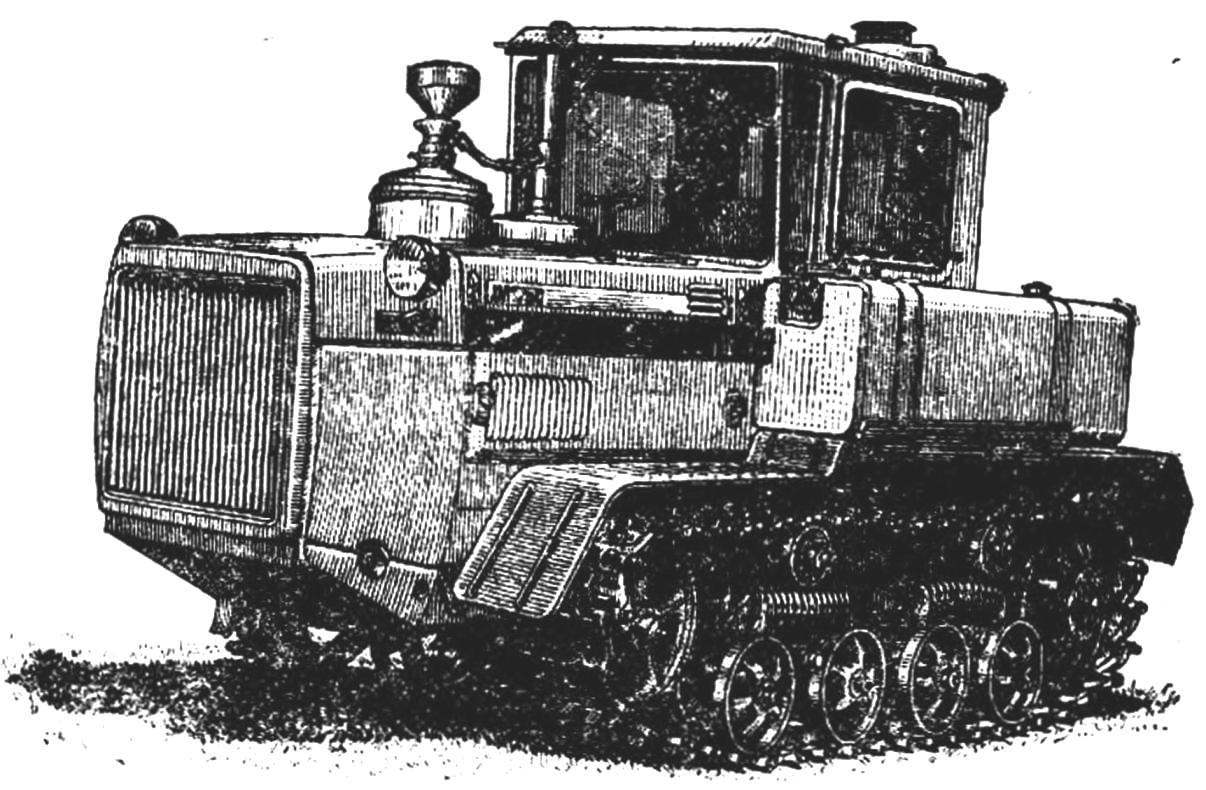 Crawler tractor DT-75C.
Work is underway on a promising models of crawler tractors, for example W-200 with engine capacity of 200 HP Is a 25-30 % increase in performance compared to DT-75C. In the cockpit of the future tractor maximum comfort for a highly effective work. Control levers are provided with pneumovirinae. The efforts of the driver to control the tractor BT-200, is small. Made sure designers and on the safety of tractor drivers in emergency situations. Cabin at the request of customers can be equipped with a frame protecting it from deformation in case of an accident.
A few words about the engine of VT-200. This eight-cylinder diesel engine with a turbocharger. Economical, easy to handle, it is well adapted for work in the fields in different climatic zones of our country.
Now the plant is being prepared for serial production of DT-75C. Developed technology, avtomatiziruete and mechanisims many production processes. All this will improve the reliability and quality of a new car.
KEY FEATURES
The range of working speeds, km/h …….. from 9 to 19
Engine power, HP …. 170
Engine ……. .SMD-66 (V-shaped, six-cylinder)
Transmission ….. five-speed
Track width, mm 390 …
Step caterpillars, mm ….. 170
V. P. SHEVCHUK, chief designer of VGTZ