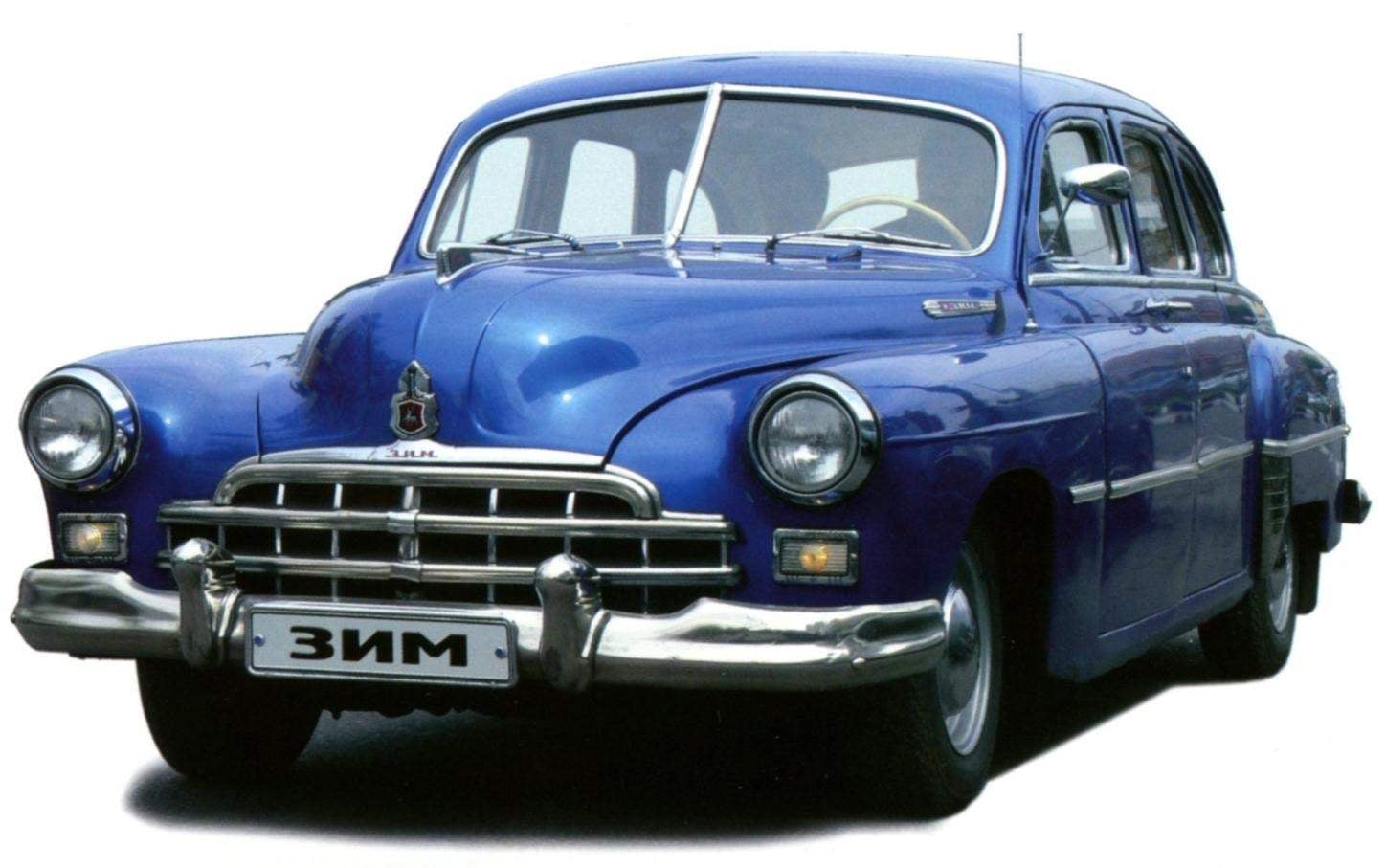 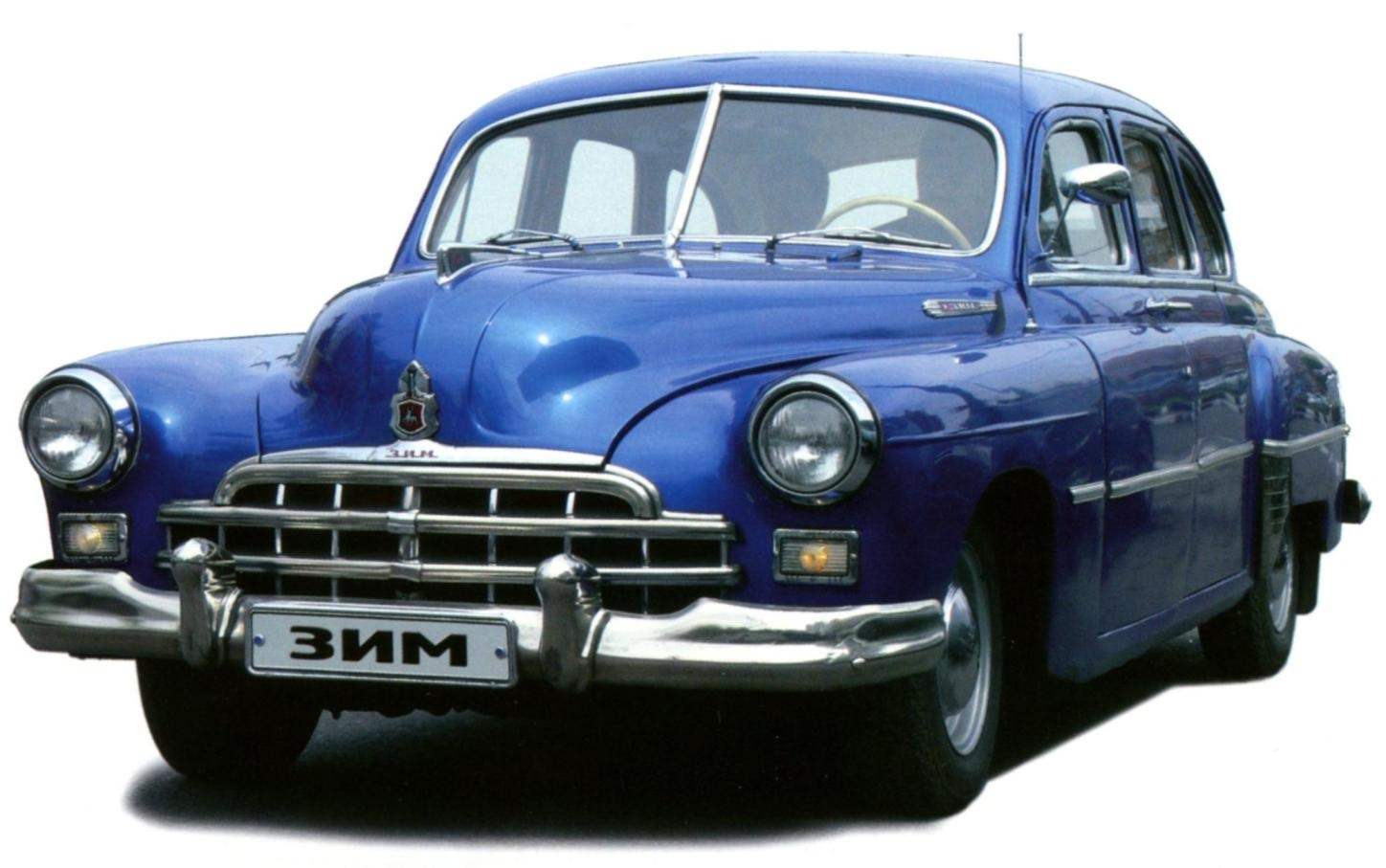 Executive car GAZ-12 (ZIM). The names of Soviet aircraft were assigned, usually by the name of their chief designer. Created by C. A. Yakovlev received the name Yak, Mikoyan and M. I. Gurevich – MiG, S. A. Lavochkin – La, P. O. Dry – su, A. N. Tupolev – Tu. Well, the names of the cars have never been associated with the names of their designers, and so few people know who was A. A. Lipgart, N. A. Astrov, V. A. Grachev or B. M. Fitterman.

In this post we will talk about the car created under the direction of Andrei A. Liphart – the chief designer of the Gorky automobile plant between 1933 and 1951, doctor of technical Sciences, winner of five Stalin prizes and three orders of Lenin. This GAZ-12 (ZIM) is a seven-seat Executive car of a large class.
In the early postwar years, the Soviet pautinopodobnoj item second tier took the car. Although already in 1946 began the production of passenger car of the middle class GAZ-20 “Pobeda” (developed, incidentally, also under the leadership of A. A. Liphart) and Executive car, limousine ZIS-110 to the higher echelons of power, nor one nor the other was not fit for the secretaries of regional committees and city committees of the CPSU, Ministers and academics.
The government’s job to develop Executive car, which according to its main characteristics were to occupy an intermediate position between “Victory” and “ZIS-110”, was received by the leadership of the Gorky automobile plant named after Molotov in the spring of 1948. All work on creation of the machine, including the issuance of “zero” series, was given about two and a half years – an unprecedented short period of time, not only for the Soviet automobile industry, but also for foreign companies. 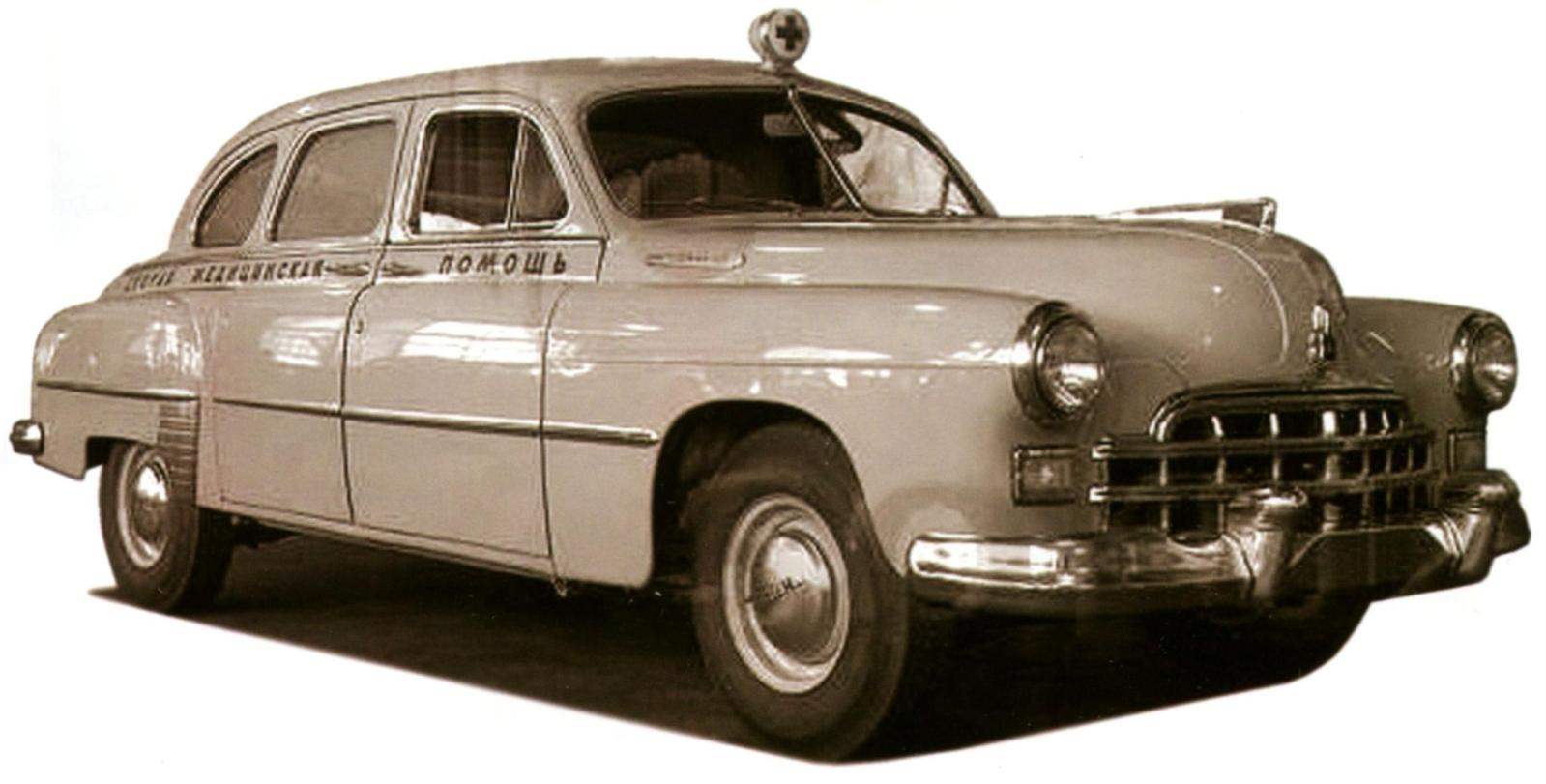 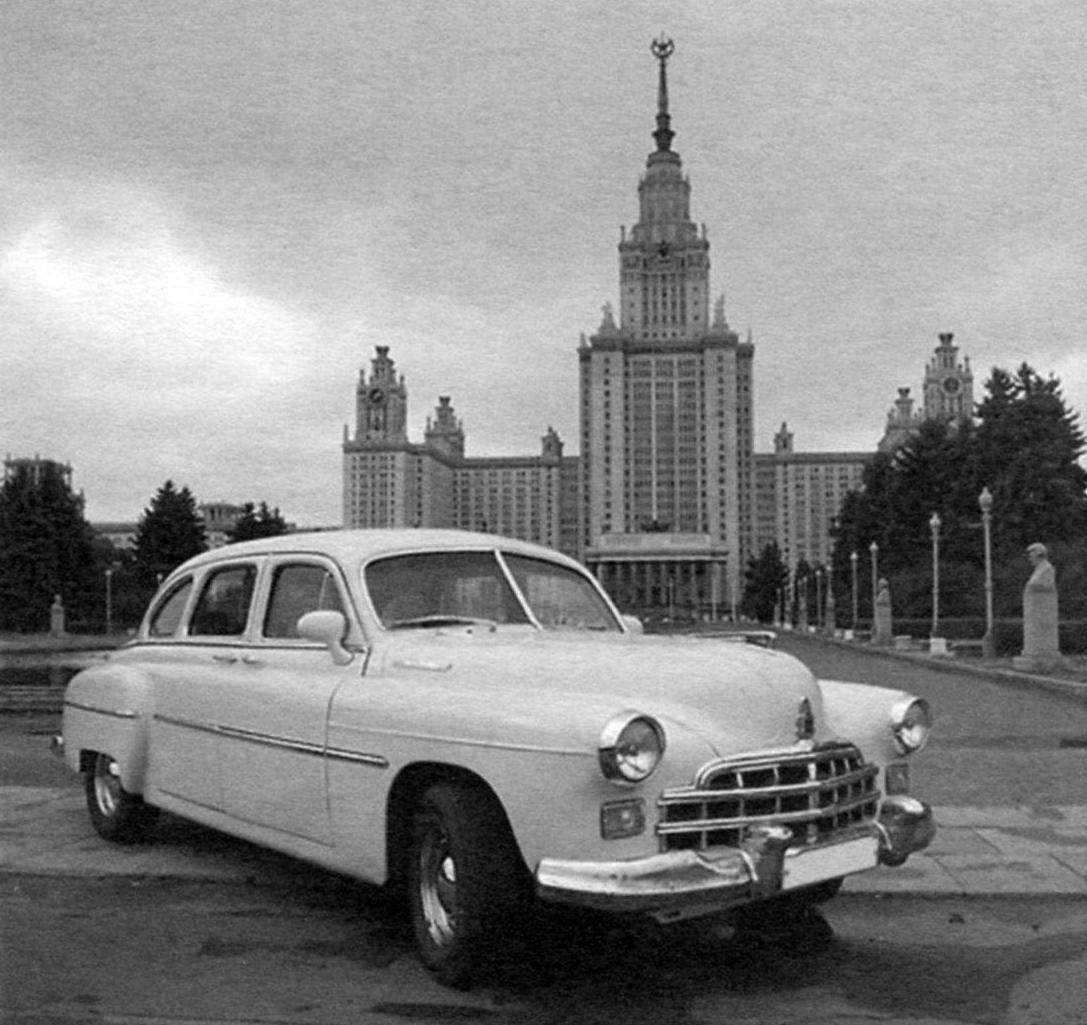 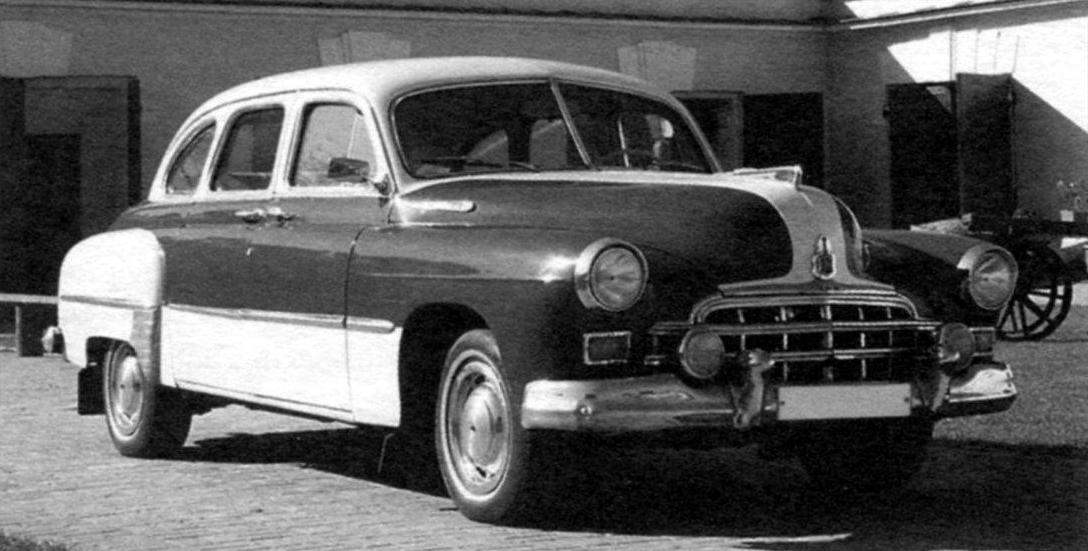 Part of the produced cars were painted in two colors – beige and dark cherry
Before A. A. Lipgart had a difficult alternative is to copy the American Buick, it is strongly recommended that the Deputy Minister of the automotive industry
B. A. Garbuzov, or design a original car with maximum use in the design of manufactured components and assemblies.
Chief designer, chose the latter path, which was almost a feat, since at that time due to design and technological gaps was stopped serial production of “Victory”, to the annoyance of Stalin. In this situation, the violation of deadlines for Executive cars in production threatened A. A. Lipgart, not even by removal from office and a decent life in “places not so remote.”
The confidence of the chief designer in the success was based on the experience of creating “Victory” – car with a monocoque body pontoon type. It thus saw Lipgart and future GAZ-12 (ZIM).
The complexity of creating high class car was compounded by the fact that GAZ did not have the engine, your power to heavy machines. However, the plant was producing six-cylinder engine GAZ-11, which could somehow “bring to mind” – this engine, designed in 1937, was mounted on a GAZ-11-73 “emka”. True, the power he had was too small-at a production volume of 3,485 litres he developed only 76 HP, However, the designers and engine specialists were able to increase to 95 HP by installing on the motor dual carb intake expanding channels and increasing the compression ratio to 6.7 units, such an engine could run on petrol A-72, regarded as the high-octane. It should be noted that the maximum power of the engine at the engine speed of 3600 rpm./minutes, which did its work almost silent.
As mentioned above, the designers of the Gas, using the experience of creating frameless “Victory”, developed monocoque and Winter – compared to other frame machines-equivalents, such body to be lighter by 220 lbs. Respectively for a lightweight machine it came and 95-horsepower engine – as later tests showed, he sped up the car to 125 km/h and acceleration to 100 km/h was 37 seconds, which in those days was not bad at all.
The car body is enclosed, all-metal, four-door, bearing type. The seats are arranged in three rows and middle seats-strapontin was folding, retractable in the back of the front sofa. 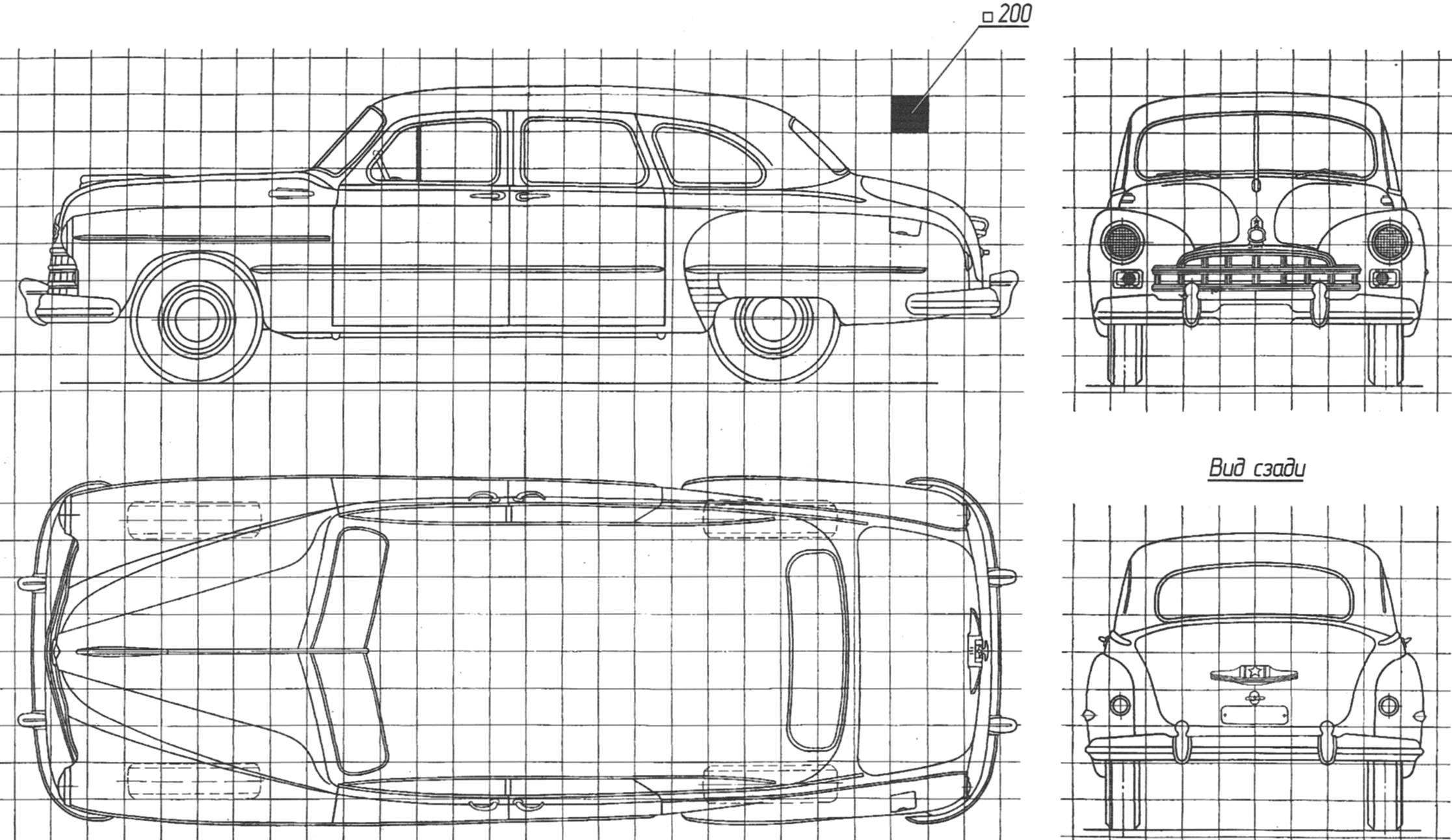 The geometric scheme of the car GAZ-12 (ZIM) 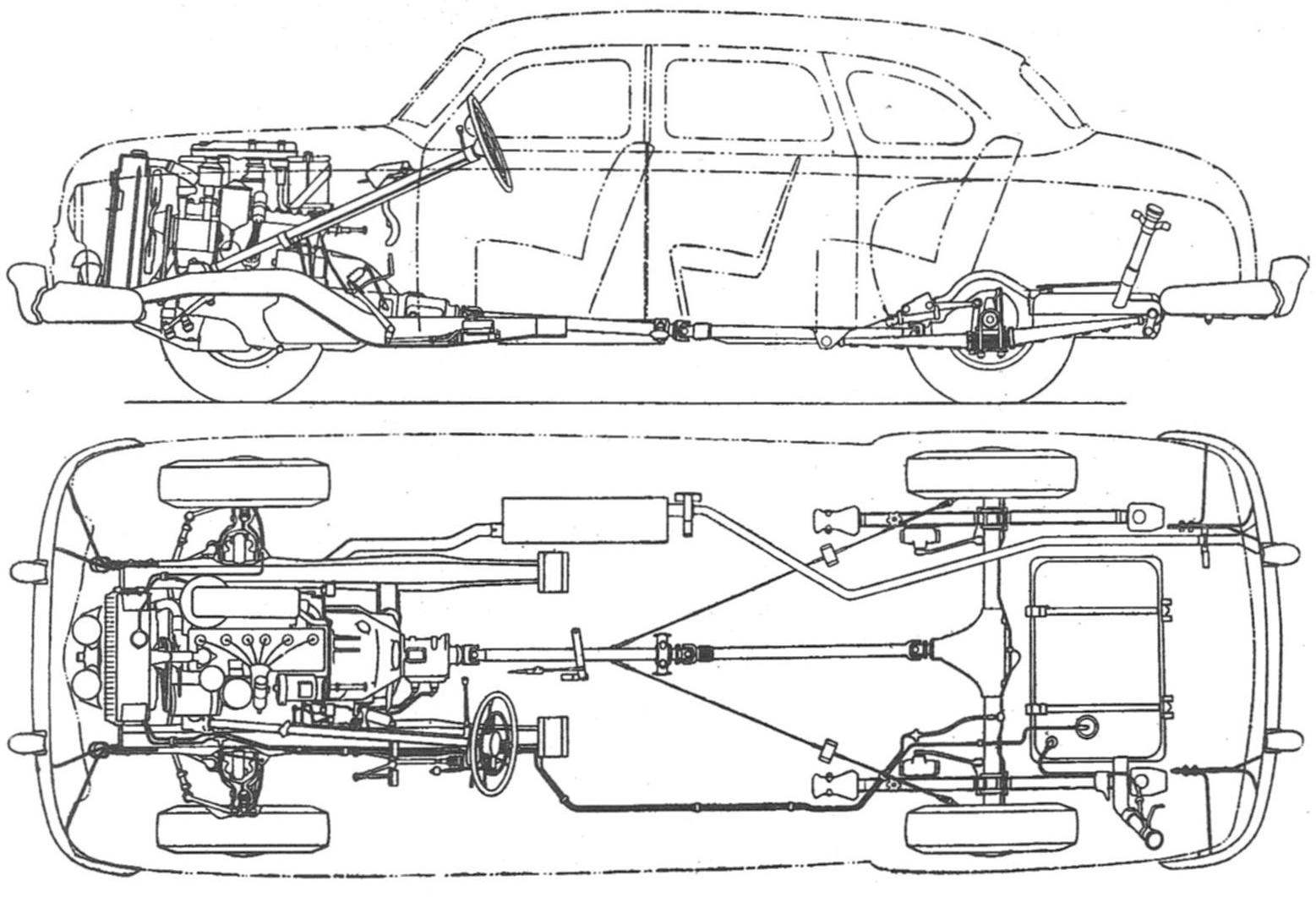 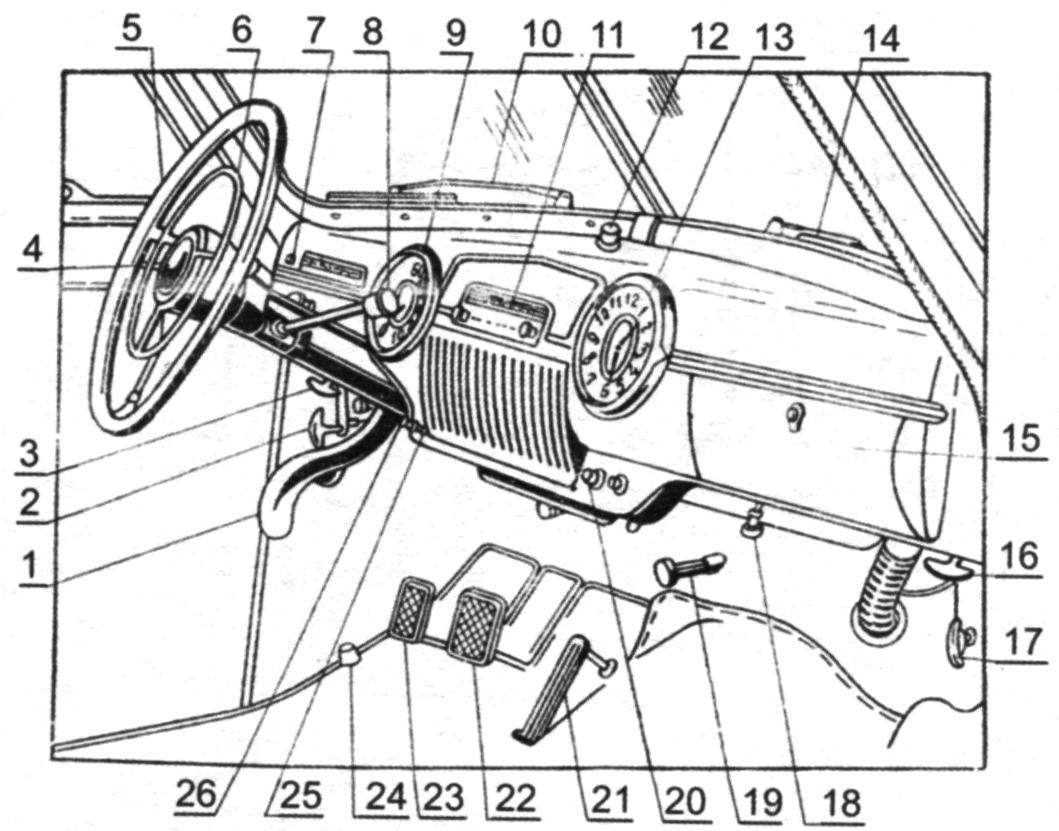 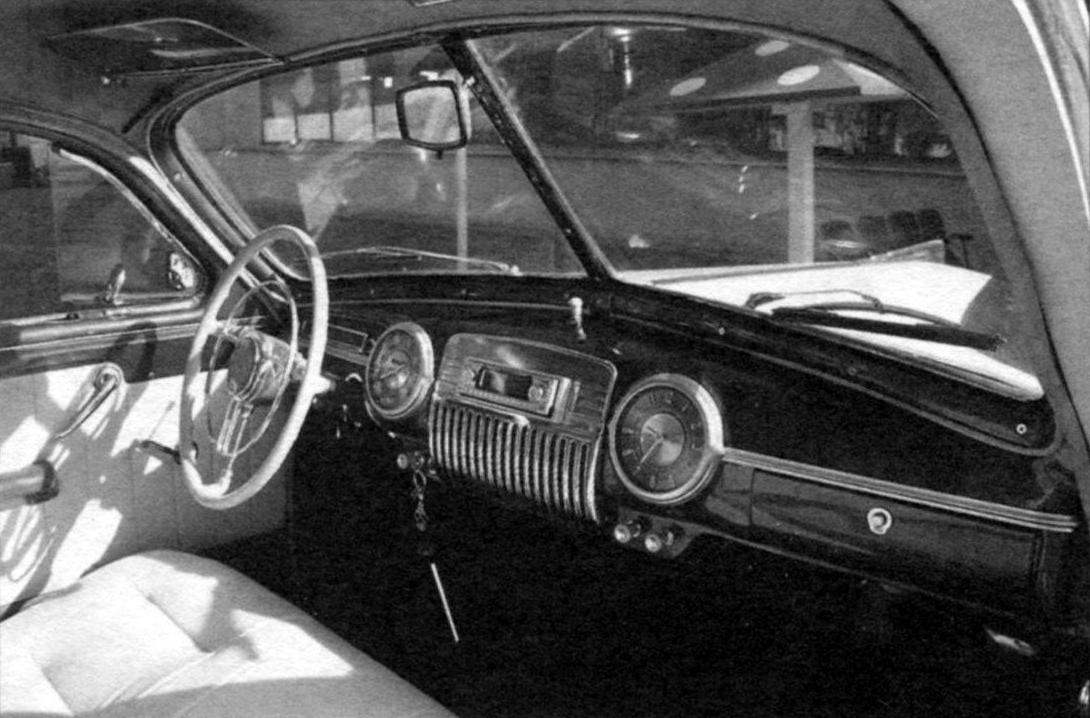 The front of the cabin Winter
The body consisted of a frame and cladding panels. To external noises did not penetrate into the cabin, its floor, bulkhead and wheel arches papered noise proof materials.
In addition, the inner surface of the body, wings and fenders covered with a special mastic.
The hood of the engine compartment – removable in the closed position it was locked by two locks; open the hood was both the right and left side.
In the rear was located the trunk of the two branches. In the bottom kept the spare wheel, tools and accessories, the top was intended for Luggage of passengers.
The front doors were opened in the course of the car, the rear -against the move. Each door had a power window and lock.
In the frontal part and the rear body panels had Windows, and the front consisted of two V-shaped spaced glass panes (as in “Victory”). In the rear door Windows were inserted in one drop-glass and window in front doors, two movable and rotatable. In the rear corner body panels also required Windows with pivoting glass.
The position of the front of the sofa was fixed, designed for a driver of average height. At that time it was fine – so were arranged the seats of virtually all trucks and some passenger cars.
The vehicle had a heating system, which ensures uniform heating of the air in the front and rear compartments of the cabin, and heated windshield.
In the process of designing the bodywork in the factory was created called “media units”, which was elongated due to a half-meter insertion “Victory”; the base of such a car was planned for the Winter of 3200 mm. the layout allowed to test the resulting body strength, which significantly reduced the number of complex calculations and, accordingly, reduced the time of design of the vehicle. In addition, the carrier units has allowed to simplify the work of technicians and production workers when launching a new car in the series through the use of technologies already developed and proven in mass production “Victory”.
Another innovation, which has given its creators is a fluid coupling located between the engine and the clutch, which provided a previously unattainable ride and good adaptability of the motor to the road conditions. The hydraulic clutch was a turbine oil filled toroidal cavity which can spin two is not mechanically connected to each other of the rotor – one of them performs the function of a turbine and the other of the pump. When the rotor of the pump of the torque transmitted to the rotor-turbine, however, allowed their relative slippage. That is why the hydraulic clutch allows the car to move even in second gear, providing a smooth and quick acceleration without a shift to third gear until the speed of 80 km/h.
To improve braking performance quite a heavy car, the designers for the first time in our country used drum brakes with two leading shoes, each of which had a drive from your cylinder.
For Winter has developed a new gearbox for the first time in the history of the plant she had synchronizers on second and third gear (remember that in the absence of synchromesh the driver had to change gear with double squeezing the clutch and blipping). In addition, the gear lever mounted on the steering column – this box appeared to “Win”, the 21 th Volga, and other cars produced by the plant.
Generally speaking, WINTERS became the bearer of many innovative solutions. Among them was and hypoid rear axle with a continuous sump in combination with a two-section driveshaft, which allowed the designers to lower the floor level and get rid of the tunnel under the driveshaft.
The rear suspension on two longitudinal semi-elliptic leaf springs running complete with two hydraulic double acting shock absorbers.
Each of the springs consisted of ten leaves, tightened the Central bolt and four clips.
Front suspension – coil springs, independent, on the wishbone; shock absorbers – hydraulic, double acting.
Steering-steering had, but driving a car was easy enough – helped the steering wheel of large diameter and increased to 18.2 transmission ratio of the steering gearbox.
In 1949 it was collected several running prototypes of the future Winter. It should be mentioned that the first prototypes of the sides were smooth, as on “Victory,” however, what was good for the machine in length 4665 mm, looked too monotone-5530-mm limo. The following prototypes of the car’s design was improved in the area of the rear wheels on the side were made of punch, simulating a non-existent wings.
Salon Winter were trimmed though without much luxury, but stylish and high quality. Used in the finishing of chrome and painted wood items, plastic imitating ivory, fabrics, muted shades. 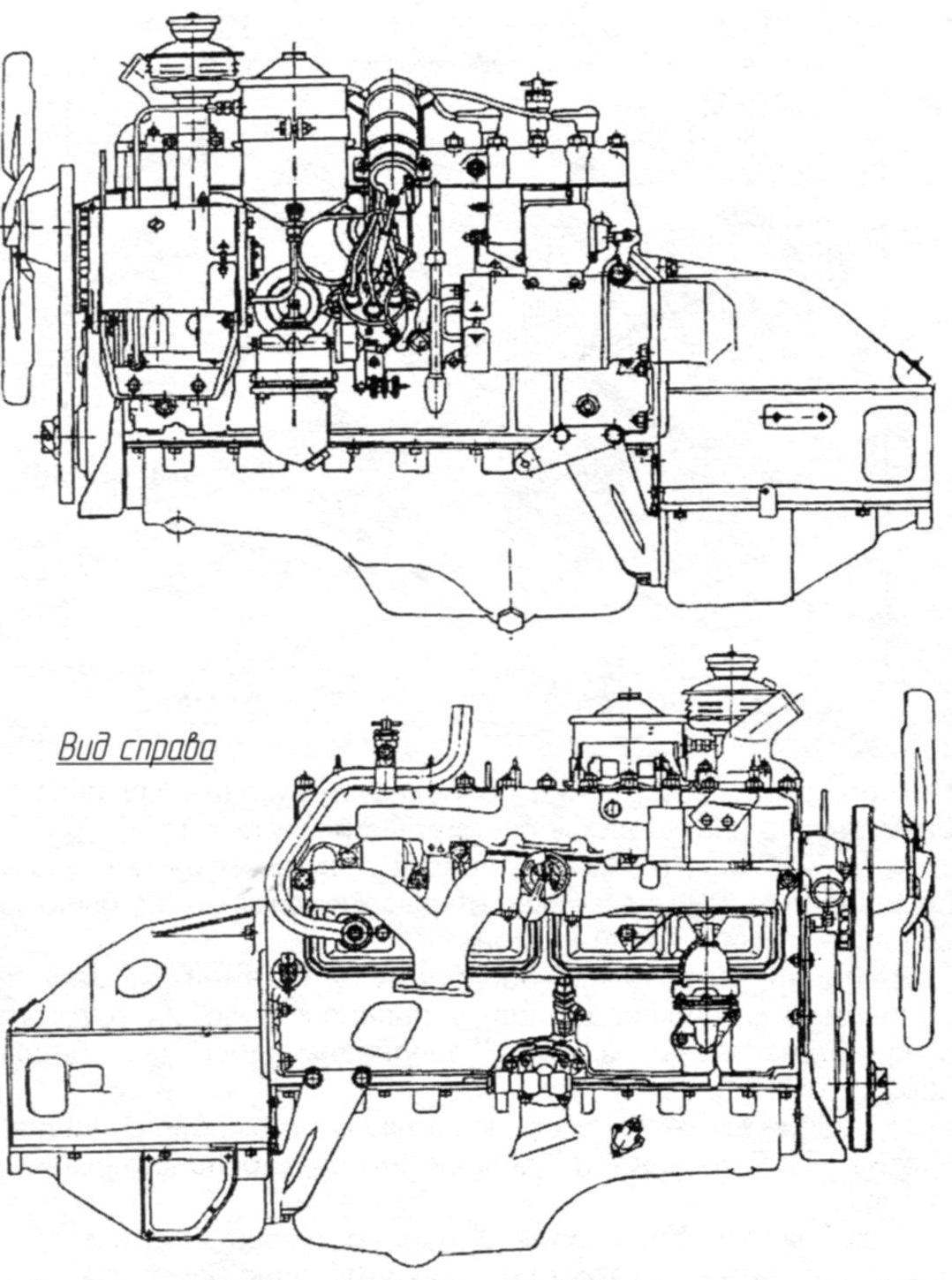 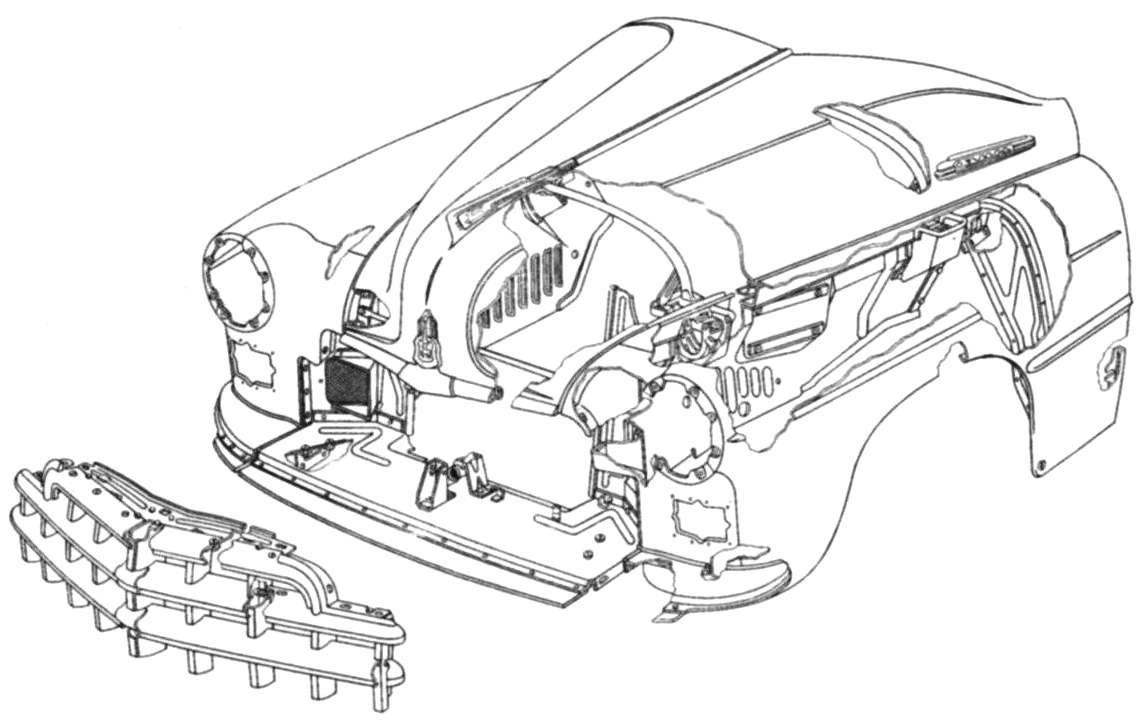 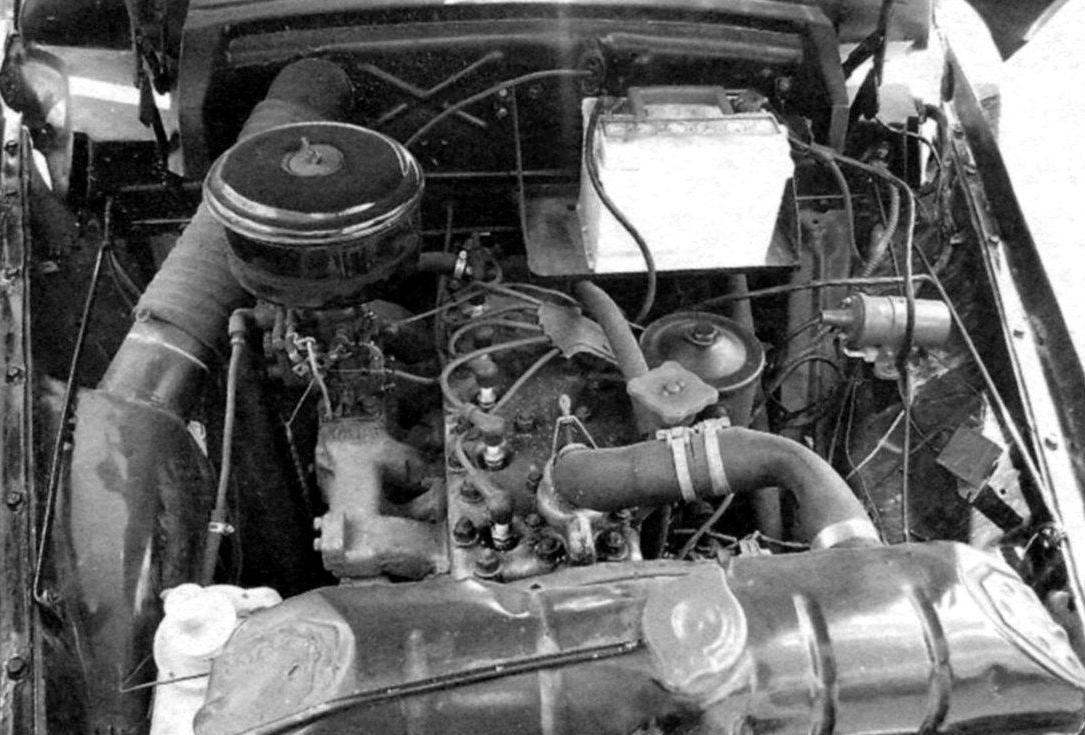 Hood space of the car 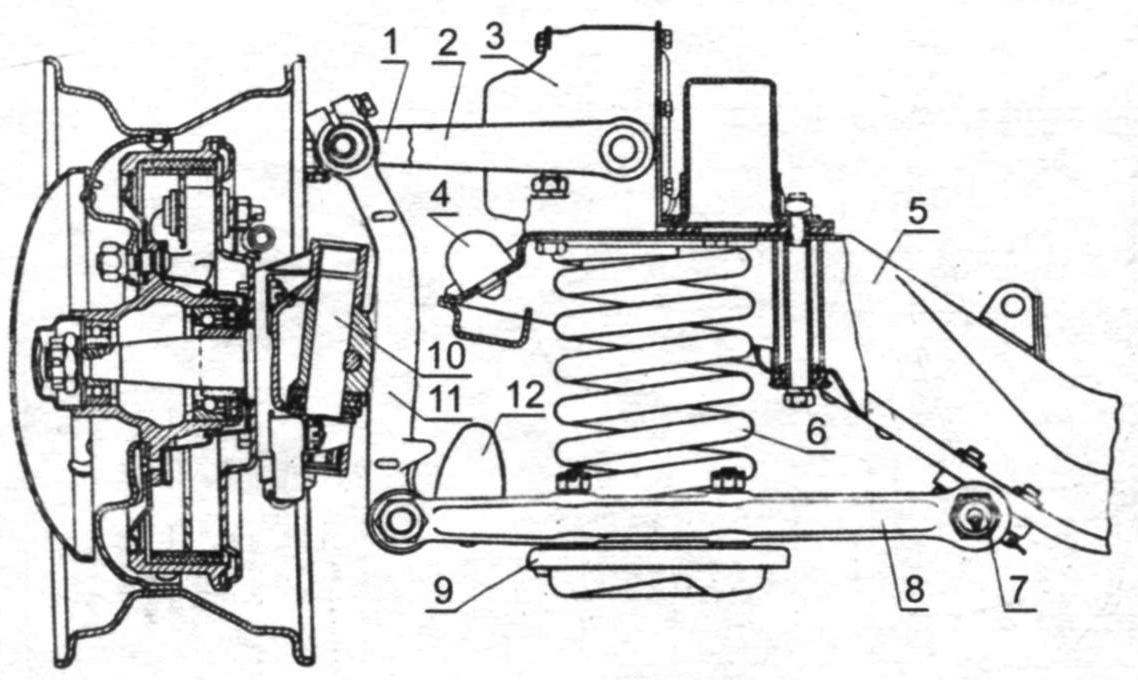 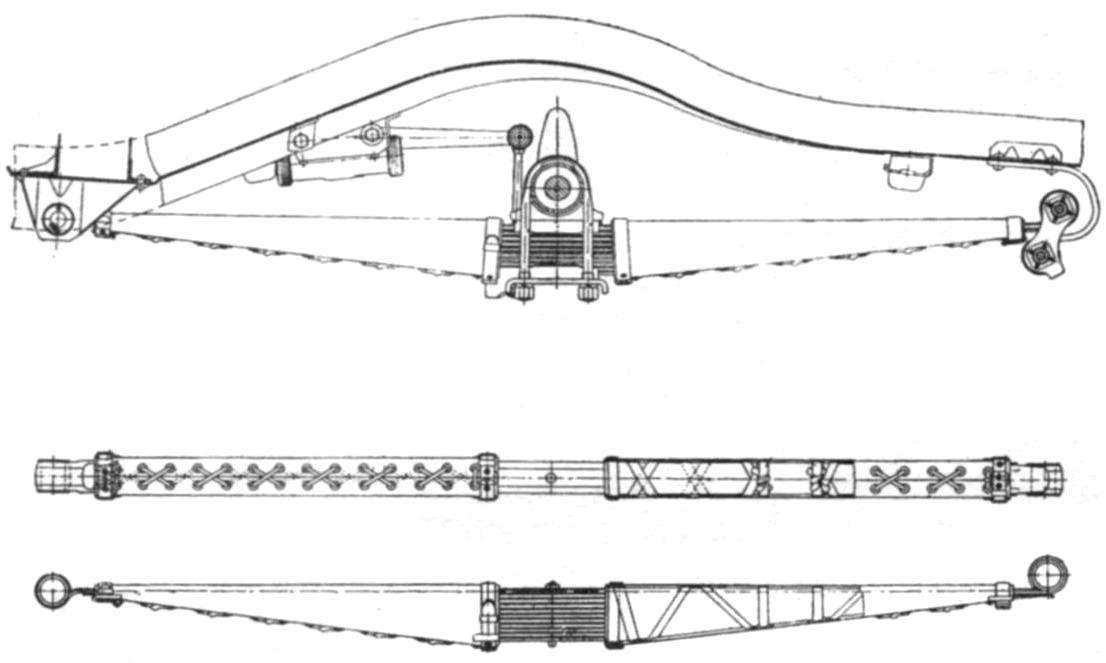 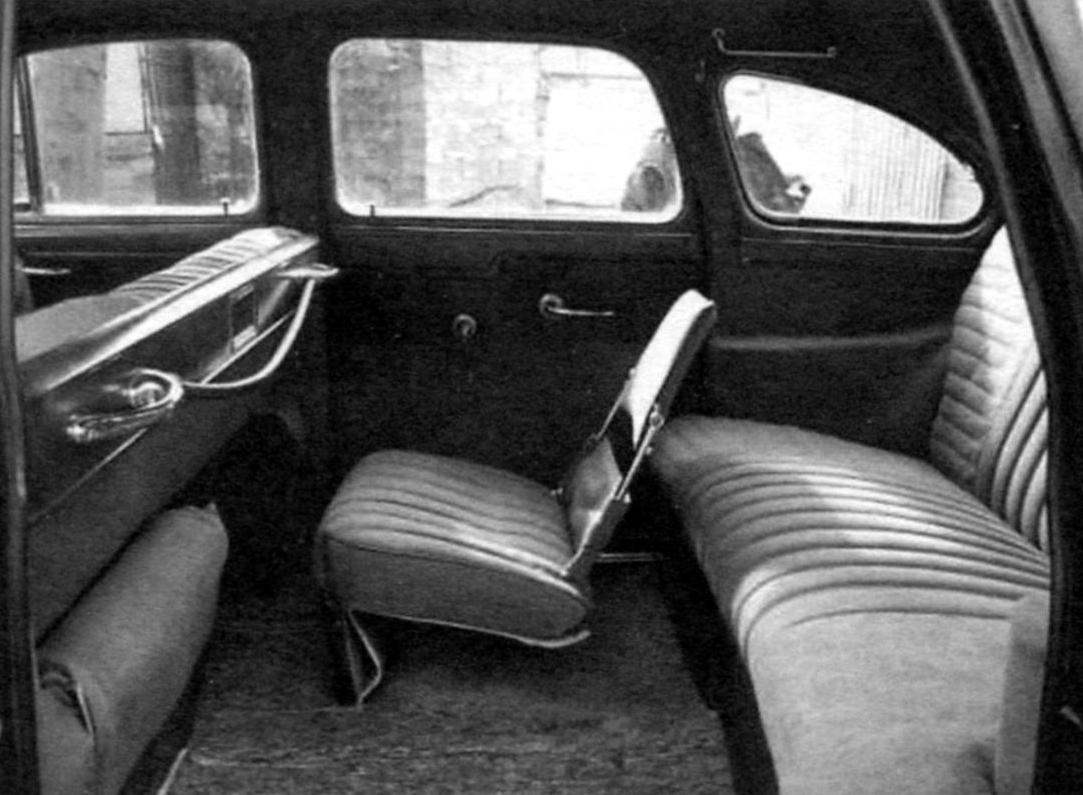 The rear seat of the Winter. One of the seats of strapontins removed, the other tilted 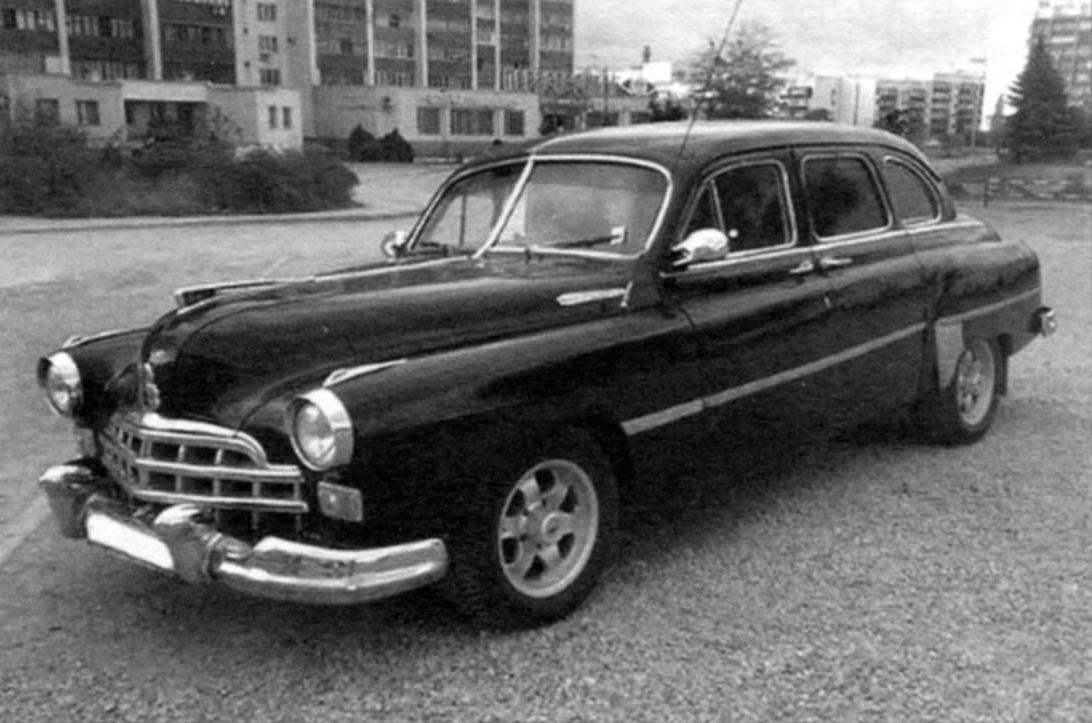 Basic dimensions of the cabin Winter 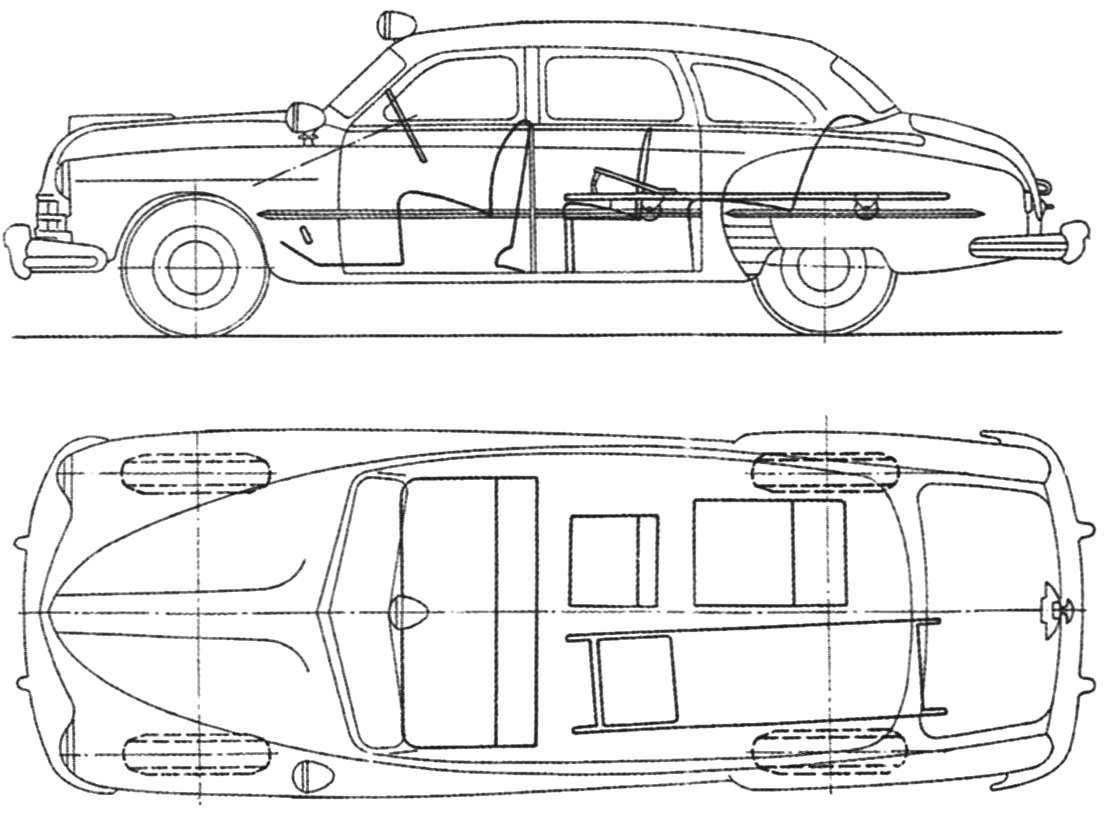 The ambulance GAZ-12B
The car was equipped with a radio, f-4, which was chistianity a superheterodyne with push-button range switch. There were three ranges – long wave, medium wave and shortwave. Telescopic whip receiver antenna was located on the left front fender. The power tube of the receiver was carried out from an onboard network of the circuit of the filament of each pair of lamps connected in series and energized from her directly, and the anode circuit from the vibrator, which produces a current with a voltage of about 200 V. When operating this receiver consumes the current in the 3 to 4 And, therefore, when the engine is off are not recommended to use more than five hours.
On 7 November 1949 the first prototype of GAZ-12 ZIM took part in the festive demonstration in Gorky. And after three months the car was shown at the Moscow Kremlin Stalin and his entourage. According to eyewitnesses, a car like the manual, and even Stalin praised WINTERS. Having ascertained, however, that the car was designed by A. A. Lipgart, which, in his opinion, lay the blame for the halt in production of “Victory”, Stalin was grim and asked the Minister of the automotive industry: “Why ne punished?” The words of the leader fell on manured soil in December, 1951 A. A. Liphart was deprived of the post of chief designer of Gas, and in 1952 was sent to the city of Miass, an engineer at the Ural automotive plant.
It should be noted that in Miass designer gift of time is not lost – according to his proposals and his involvement was modernized Ural truck ZIS-5. In 1953, after Stalin’s death, the designer was transferred to Moscow, where he headed the Department of “Cars” in Bauman. Bauman. At the same time A. A. Lipgart has worked as Chief designer in the US.
In October 1950, was collected by the first industrial batch of GAZ-12 (ZIM), and a year later held the state tests three cars with a full load – each run was about 21 000 km.
In addition to the seven-seat Executive sedan ZIM produced in the GAS-12A (taxi) and GAZ-12B (ambulance). At this sanitary ZIM had a glass partition behind the front sofa, two located one behind the other folding chair and a stretcher, sadogashima into the cabin through the cover of the former trunk. The car was painted in a light beige color. Taxi was no different, Executive Winter, mainly by the presence of the taximeter and upholstery – instead of velour or cloth was used for her artificial skin.
In just ten years, mass production was made on 21 527 cars WINTERS. Since 1957, in the name of the Gorky automobile plant named after Molotov was abolished, the name fell into disgrace, Minister of foreign Affairs Vyacheslav Molotov, respectively, and WINTERS turn into a GAZ-12…