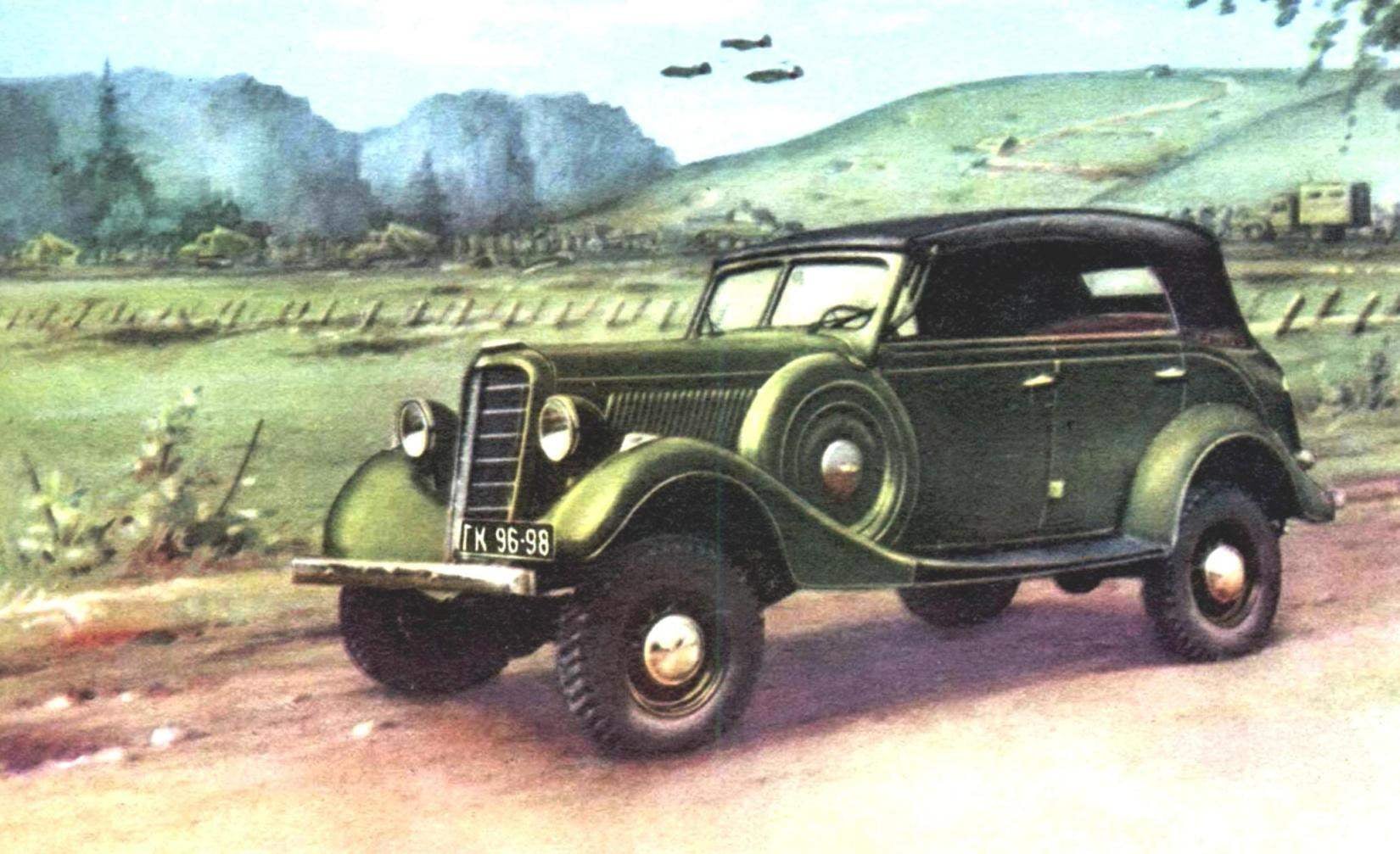 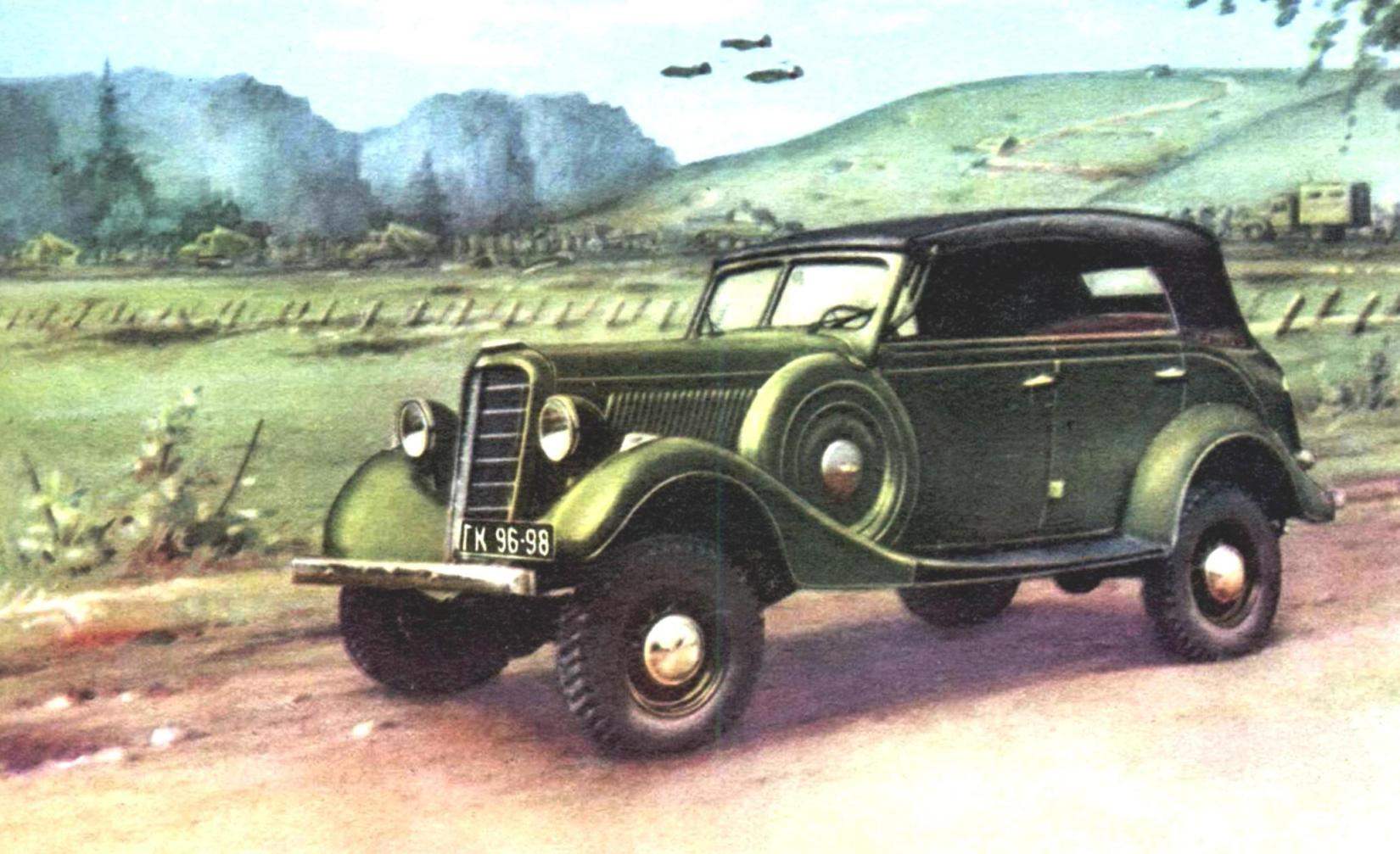 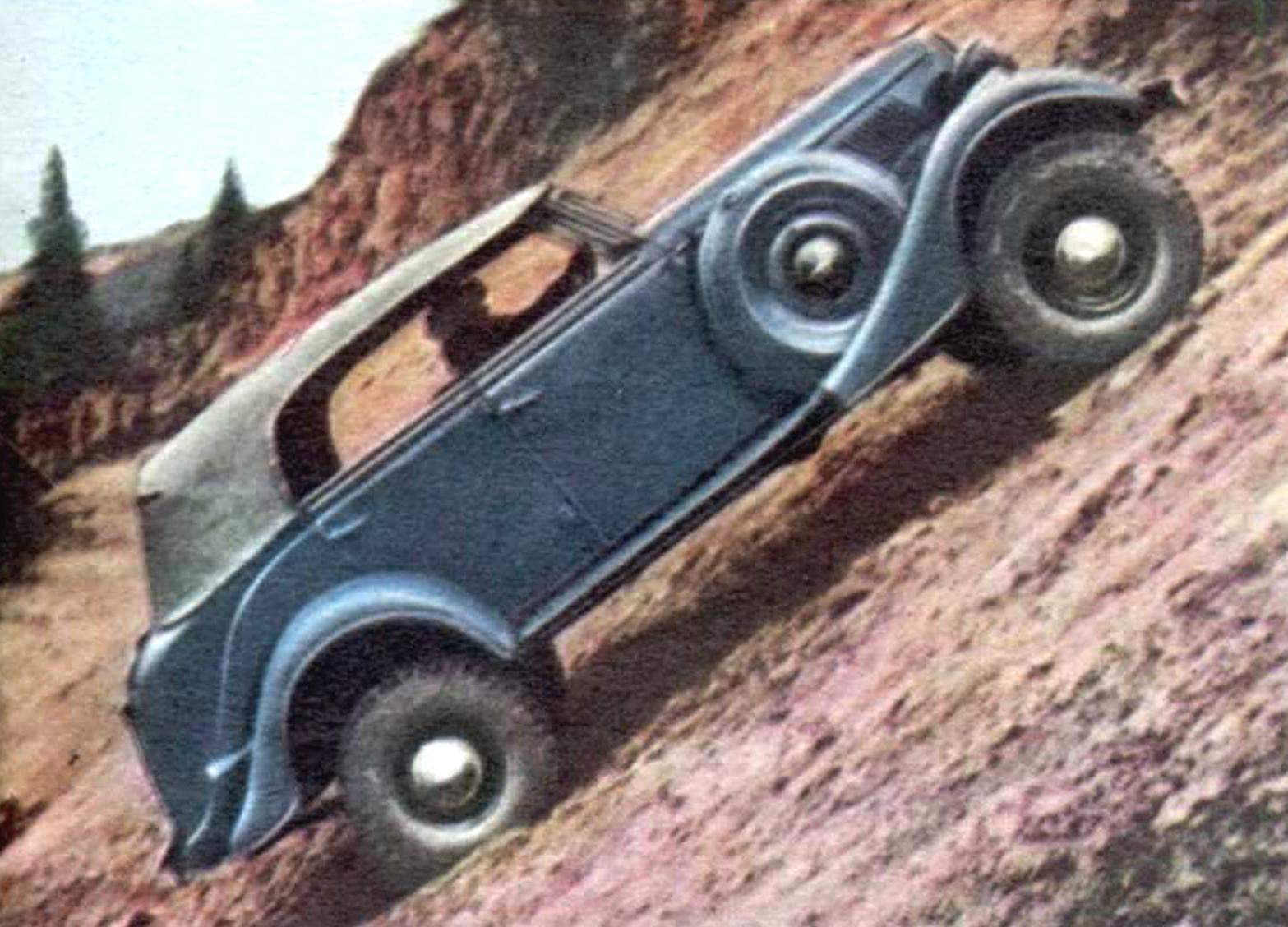 Parades of old cars occupies pride of place of the car GAZ-61-73. This battered machine, with the body of all the memorable “emka”, only some kind of leggy like prepodavala on tiptoe (a consequence of the front axle), deserved the honor. All the years of the great Patriotic war have driven it on the front line the roads of the Soviet Union Marshal I. S. Konev. Starting your martial path at station Kasna Vyazma, she was a fierce snowy winter of 1941/42 on the Kalinin front, in a difficult summer of 1943 drove Ivan Stepanovich in the Voronezh and Belgorod steppes, overcame Ukrainian thaw in 1944, and finally rustled grooved tyres, littered with broken stone streets of Berlin in may 1945.
The car did not spare not only the heavy front roads, but bad gasoline and oil, and irregular maintenance and acute shortage of spare parts. Nothing could protect her under fire from bullets and shrapnel. Still bent over to the right side of its roof visible traces polukilogrammovy fragment of German bombs — only by sheer luck he missed the commander.
Of course, the Marshal during the war there was ample opportunity to change your vehicle flexible and practical “jeep” or “Bantam” and later on a comfortable and solid trophy limousine. But Konev, and all of them were rather battered “emka”. What was special about this at all not an army car, which is so warmly says the Marshal in his memoirs? The sides are interested in the history of its creation.
In the 20-ies in connection with the growth of motorization of the red Army revealed the urgent need in special cars of the raised passableness — the commander, intelligence, large, cohesive, suitable for use as the chassis of light armored vehicles. Normal cars do not have sufficient reliability in off-road conditions.
Numerous attempts to create in our country in 30-e years of a three-axle (6X4) and half-track versions (Ford-A-US NATI-2, GAS-A-“Kegress”, GAZ-TK, GAZ-AAAA, GAZ-21 NACHI-VM, etc.) did not yield the expected results. Obvious was the need for four wheel drive vehicles with all wheel drive. Technologically before the war it was already done: the designers managed to solve the problem of creating compact and efficient constant velocity joints for front wheel drive.

On the broken tank tracks roads, pitted by shells lands and along the streets of the ruined cities she went to Berlin — the historic “m”-the Rover GAS-61-73 — one of the best cars of the great Patriotic war.
The basis for the new army of the car was good Gorkovskaya “emka” GAZ-M-1, who had a sufficiently reliable and robust landing gears. By early 1938 had built prototypes of its next modification of the GAZ-11-40 with a powerful new 6-cylinder engine GAZ-11, an open body with a canvas top (for southern areas) and a spacious boot. At the end of July 1938, was given an engineering job, and in September began designing all-wheel drive version of the new “emka” — model “61”. Again had to create actually only a front driving axle (by the way, for the first time on the Gas) and the transfer case. For their power was used a slightly modified driveshaft car ZIS-101 with joints on needle bearings. Rear u-hall — closed, double (with intermediate hinge). Instead of three-speed “cars” transmission used “cargo” four-speed from the GAZ-AA with doubled power range that allowed to do without a dual. In the mechanical brake was applied by the equalizer. Bus — special “all terrain” profile “just the Flu”. The remaining components, units and systems: body, 85-HP engine with cooling system, polycentropodidae clutch, rear axle, suspension, brakes, electrical, steering wheel — GAZ-11-40. The prewar period was tense: was fast, the design was given few months or even weeks. By January 1939, managed to produce all the working drawings, in April and began the Assembly and on June 10, the new car GAZ-61-40 blue already came to the factory test. They were conducted during the summer and autumn of 1939. This car country did not know. On the highway with a full load (500 kg), he developed a speed of 107,5 km/h, with minimum fuel consumption 14 litres per 100 km New vehicle fully met the expectations of creators — a leading designer V. A. Grachev, engineers B. D. Kirsanov, A. G. Kuzina, N. G. Mozohina M. P. Pimenov, S. G. Zhislina, V. I. Podolsky and others. Thanks to all-wheel drive, large stocks of engine power, increased gear ratio in the transmission, tyres with special profile and raised on a 150 mm frame, the new “emka” was overcome on the ground such hoists, each crawler machine up to 43°. Moreover, this value was limited to twisting the rear half shafts and start tipping back, and not traction capabilities.

On the sand GAZ-61-40 took rise from zero to 15°, with a speed up to 30°, Ford (with the removed fan belt) — up to 0,82 m, rose — of a width up to 0.85—0.9 m, a snow depth of more than 0.4 m. the Car has not been stuck even on the blurred autumn rains dirt roads and arable land, could tow a trailer weighing up to 700 kg, is confidently handled through a log with a diameter of 0.37 m and even climbed on Board to a 45-santimetry platform / dance floor kultbazy automobile. Widely known photos of N. N. Dobrovolsky, the chief chronicler of Gas and unchanged at the time of the participant testing of the crew of GAZ-61-40 (L. N. Sokolov, V. A. Grachev), showing how the machine climbs on the Grand staircase of the Volga slope in the bitter and River station in Moscow. Were tested in parallel by four-wheel drive American cars “Ford-Marmon-Herrington” LD-2 showed the worst patency. High quality — dynamics and throughput — GAZ-61-40, unsurpassed, by the way, still has his post-war successors, allowed to refuse from the planned volumes have already been prepared for production, but much less successful triaxial modification “emka” GAZ-21. In the summer of 1940 the car was represented at the all-Union agricultural exhibition among the best examples of the domestic automotive industry.
During 1940, was preparing for its production. The new car is supposed to be released in three versions, more closely aligned to the interests of the army and the national economy: with an open body “Phaeton” — GAZ-61-40, with a closed standard body from “emka” type “sedan” — GAZ-61-73 vans and “pickup” — GAZ-61-415. The first managed to collect only a few pieces (one of them within a few years of use Marshal of the Soviet Union K. E. Voroshilov) — was no longer of public bodies, was the establishment of their production, and not completed by the beginning of the war. That’s why the main model of passenger vehicle to high command of the red Army became the GAZ-61-73; a significant batch was released in 1941, especially in the first months of the war. The simplified “pick-up” GAZ-61-417, used as Prime movers for light artillery systems, in particular in the battle for Moscow, it was mastered in the fall of 1941, but was released a short time because of a shortage of sheet metal and 6-cylindric engine GAZ-11. The need of the army in similar vehicles was extremely high, however, in August, the Gorky automobile plant stopped its passenger conveyor: stopped the supply of cold-rolled automotive sheet for the production of bodies with the southern steel mills. Later, in 1942-1943, the refinery was periodically collected small batches of GAZ-61-73.
And yet the war could not stop the work for the supply of the red Army passenger vehicles. However, the quest has evolved in a slightly different direction. In early 1941, under the influence of the recent experience of the Finnish campaign started designing a simplified mass army modification of GAZ-61 with a limited service life — the first Soviet “jeep” GAZ-64. Several enthusiasts headed by the above mentioned V. A. Grachev just two months built a new machine. Was re-designed frame, front shocks, body, radiator. The engine took from the standard polutoratonny of the truck GAZ-MM, changing only the power system and cooling. In accordance with the mission also had to narrow down 200 mm rut. The rest of the units entirely borrowed from the GAZ-61 and other manufactured machines. GAZ-64 was successfully tested at the army tank-automotive range, and by the summer of 1941 already mastered its production. Simple open body it could be made of ordinary roofing iron hand, without special equipment, and provided much-needed car pretty significant heavy production in 1941 and 1942. Subsequently, in early 1942 on its basis was produced in large quantities armored cars BA-64-125 and BA-64B-125 broad gauge and was created nine prototypes. In 1943, after making a number of improvements and return to the wide track, the car received a brand GAZ-67, and in 1944-m — GAZ-67B. 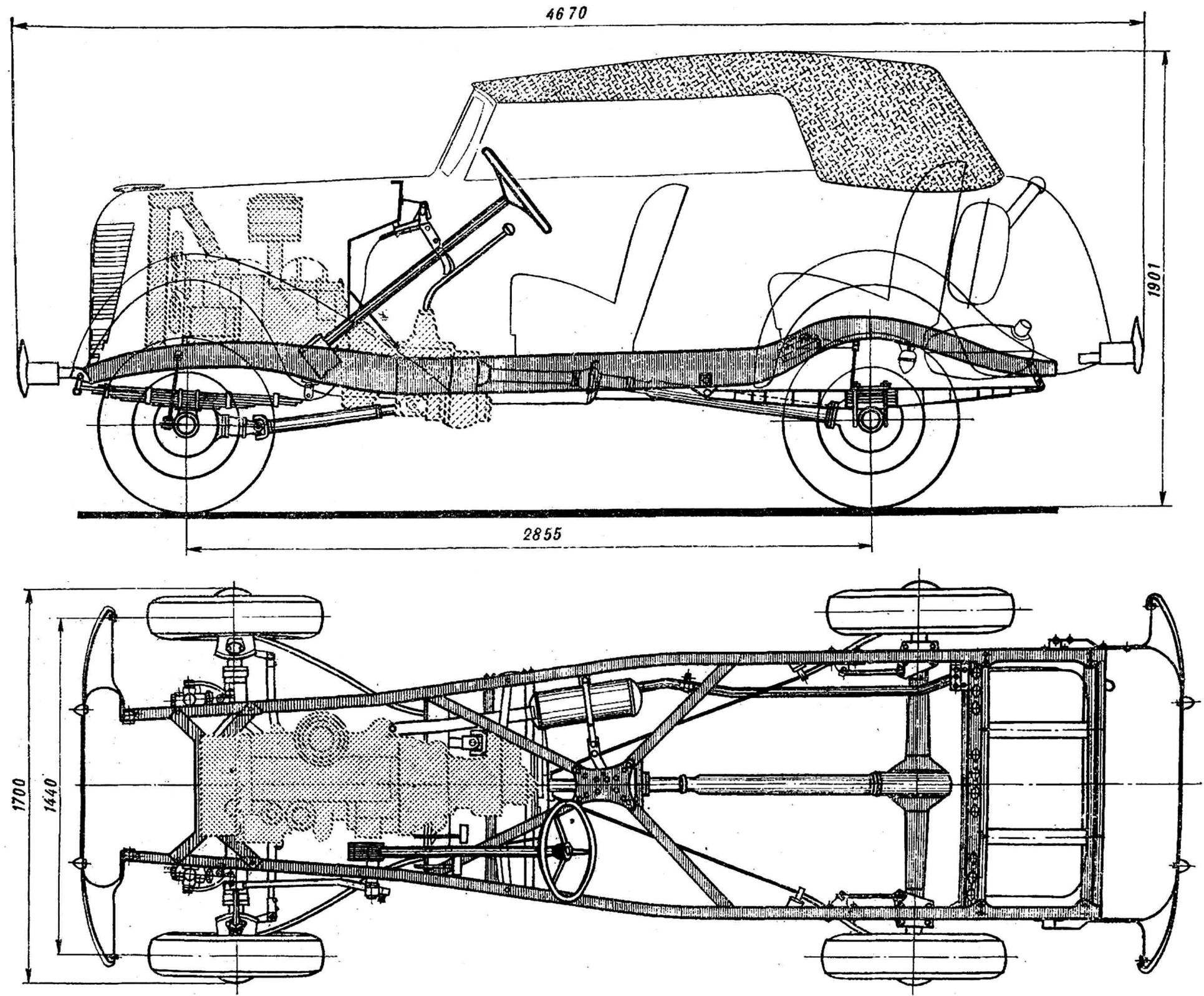 The chassis of the car GAZ-61-40.
The extremely high permeability of the GAS-61-73, far superior to that of the appeared in 1942, the American “jeep” and “Bantam”, a closed body, excellent dynamics, endurance, unpretentiousness — all this has earned them deep respect for veterans, as there is mention in the military prose in the works of Simonov and B. Field. Such machines were used by K. E. Voroshilov, G. K. Zhukov, K. K. Rokossovsky, Timoshenko, Budyonny, and other prominent Soviet military leaders.
Received in August 1941, Konev, the then Lieutenant-General, dark green car (engine number 620, a body № 1418) almost four years heavy front-line service due to the sturdy design and the Golden hands of her constant drivers G. I. Gubatenko and F. P. Pogorelko never capitally not repaired. For many years after the war she was in the garage of the General staff, and the last 20 years belonged to the Muscovite, Colonel N. N. Pustovoitenko. Along with a enthusiast of domestic equipment mechanic I. P. Nikitin, they did much to make this included in the history of the car has survived not only fully functional, but in pristine condition.
This car was featured in several historical military movies, not once participated in the parade of old cars. Recently its engine changed the pistons, rings, bearings, polished the cylinders and the crankshaft, carried out minor repairs, chassis and body. Transmission, transfer case and front drive axle replacement of main parts are never asked.
The car GAZ-61, quite perfect in design, with outstanding performance can certainly be the pride of domestic car industry of the late 30-ies. Its Creator V. A. Grachev were awarded for this car and the armored car BA-64-125 State prize in 1942.
E. PROCHKO, engineer