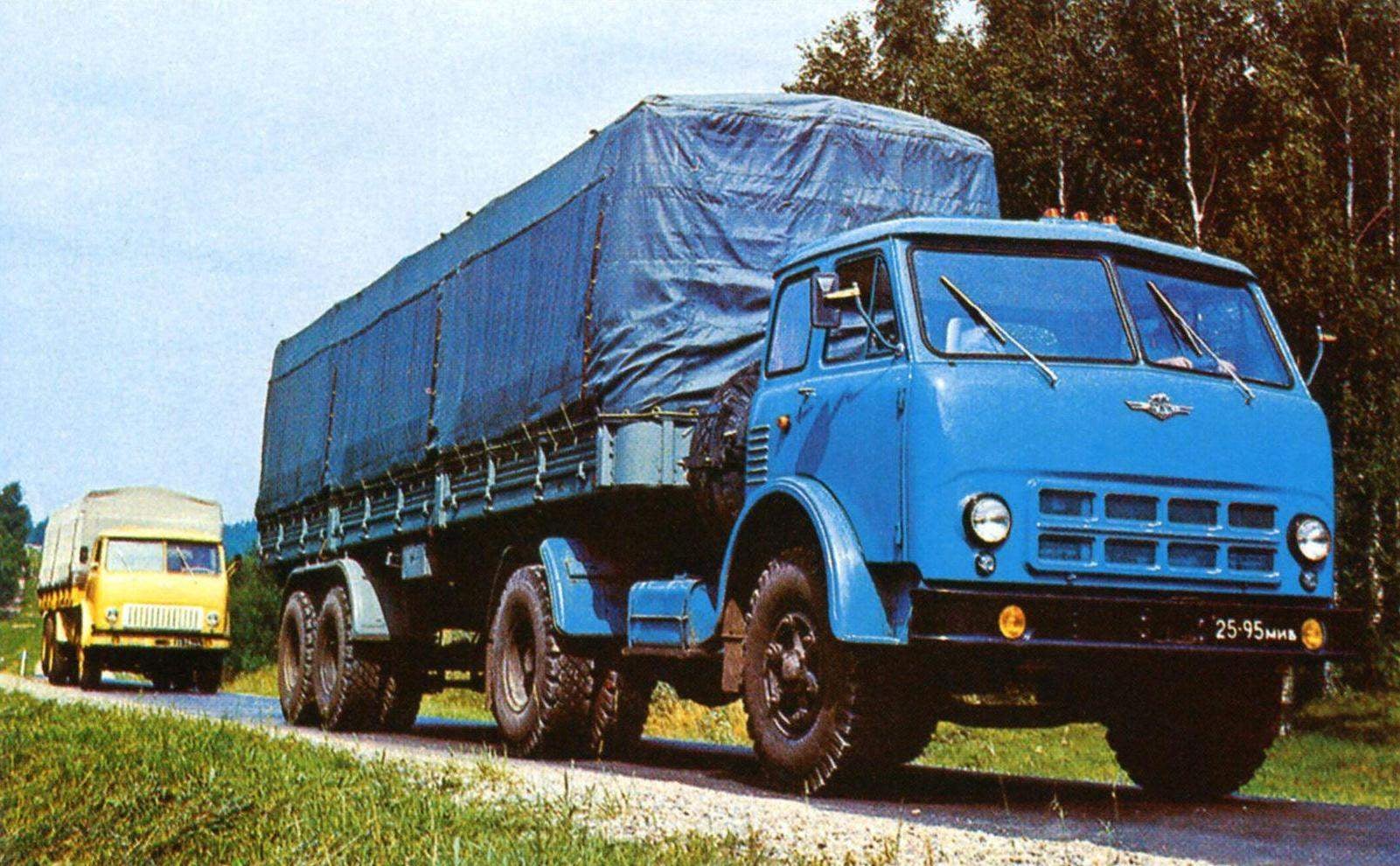 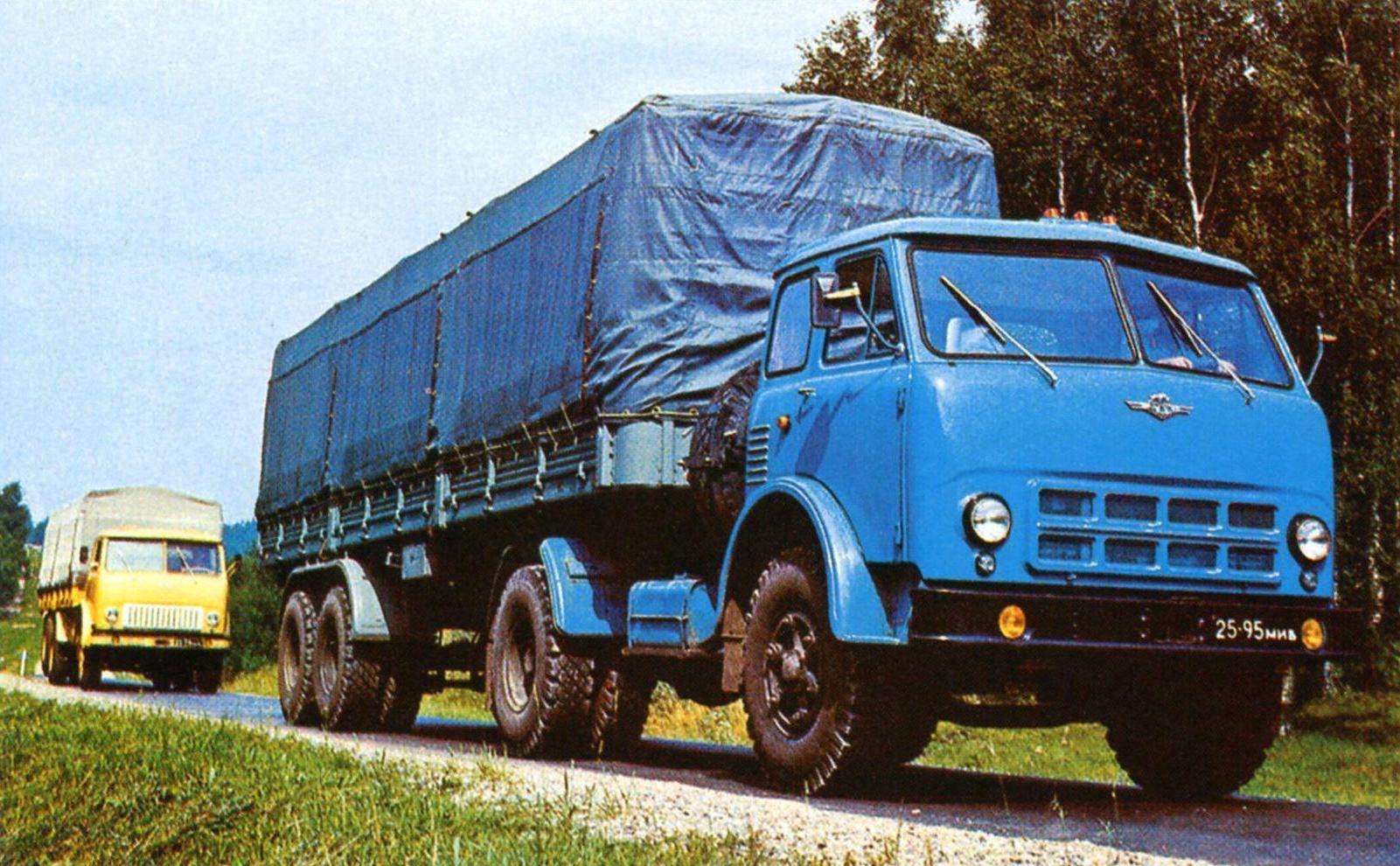 The debut of the first Soviet diesel truck yaz-200, developed at the Yaroslavl automobile plant, held in 1945, was successful. After the traditional show of the new machines in the Kremlin party and state leaders of the country truck recommended for serial production.
In 1946, the designers EASA on the basis of the on-Board diesel truck designed the 6-ton truck designed to carry mortars and bulk cargo. The machine was made of wood-metal cabin (in the early postwar years affected by the lack of the steel sheet), 110-horsepower diesel engine with 5-speed gearbox, pneumatic brakes and steel body with a capacity of 3.6 cubic metre with hydraulic lift.
Serial production of the truck in Ease began in August 1947, and in the same year almost the same truck, only different from Jaroslavl MAZ letters and silhouettes of bison on the hood, came out of the gates of experimental shop of the Minsk automobile plant. And in 1951 began production of the truck MAZ-200 with flatbed and truck tractor MAZ-200V.
equipped with two-stroke 4-cylinder 120-horsepower diesel engine model yaz-204, allowing it to reach speeds up to 65 km/h, while consuming 30 – 35 litres of diesel per 100 km.
The first self-created trucks of Minsk automobile plant have become all-wheel drive 7-ton all-terrain vehicle MAZ-501 with a gable of the rear wheels and released on its basis army trucks MAZ-502 and MAZ-502А with single rear wheels /a-line 6-Chi-landrover diesel engine YAMZ-236 180 HP and winch self-recovery winch on the front bumper. 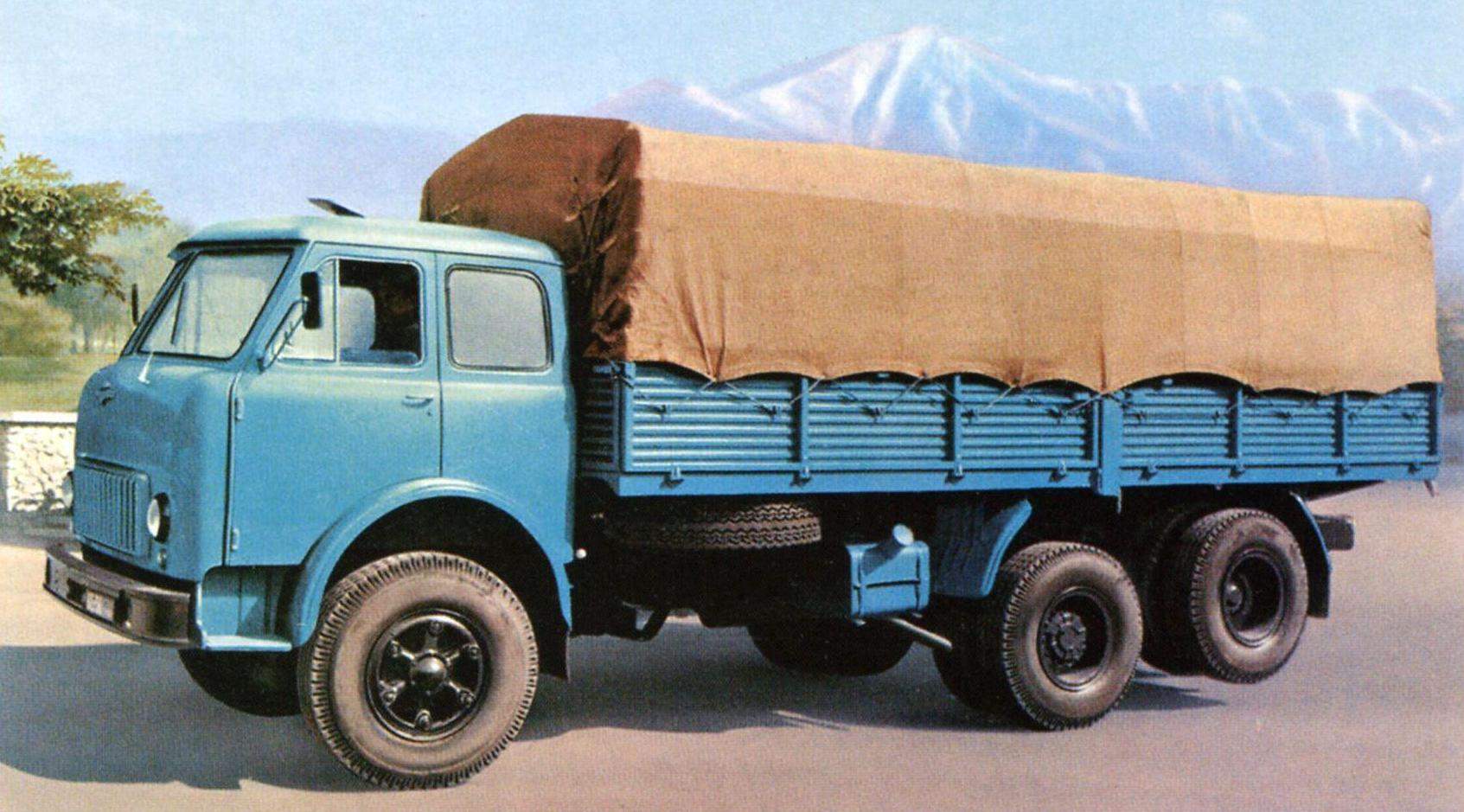 On the basis of a 7-ton diesel truck, the designers of the Minsk automobile plant has developed a model of MAZ-200G lattice sides and folding benches in the back, tractor MAZ-200V, who worked in tandem with the prefab KM-24, SCP-and SCP 9M-12 and for transporting the wall panels and concrete blocks for building houses.
In the middle 1950-x of years at Minsk automobile plant, appealed to the leaders of the Kuibyshev hydroelectric station, a request to create a dump truck with side unloading of the body. A prototype of such a truck with an index of MAZ-506 appeared in 1954. It had a steel dump body with hydraulic mechanism for tilting it to the right or left side fixed front and rear sides. Prototypes of the new car passed serious tests and has been recommended in production. And in 1956 MAZ mastered his limited-edition release.
The truck MAZ-200 was mounted cranes, powerful fire tanker trucks used to extinguish fires at oil storage and fire escapes ATSL-45 – the longest in the Soviet Union.
Since 1962, the part of cars MAZ-200 has started to equip with more perfect diesel engine – V-shaped 6-cylinder YAMZ-236 with a capacity of 165 HP; the fuel efficiency of this motor was 10 percent higher than the inline 4-cylinder, yaz-204.
In the early 1960s the designers of the Minsk automobile plant began to design a completely new cabover truck MAZ-500 with the cabin located over the engine.
It should be noted that the European car company produced trucks of this type in pre-war years, and the beginning of 1960-ies, these machines accounted for a significant part of the fleet of trucks.
However, “beskapotniki” had one drawback, which did not suit the military – patency was lower than that of cars with hood. The fact that load distribution of y bonnet of the truck unloaded the front driven wheel, not allowing them to dig into the soil. However, the weight of such machines in case of other equal conditions was less than that of conventional trucks, which saves the metal and to reduce fuel consumption, increase the capacity of the truck and improve its maneuverability.
In the middle of 1950-ies the design of “beskapotniki” began at several domestic factories, but the greatest success has achieved designers MAZ-N. Kuzmin, L. Gilels, A. Wagon, I. Demidovich, N. Yankov, L. and Lavrent’eva F. Revzin, who worked under the leadership of talented designer and organizer M. S. Vysotsky. For the creation of heavy vehicles and road trains MAZ-500 group of specialists of the Minsk automobile plant was awarded the title of laureates of State prize of the USSR. 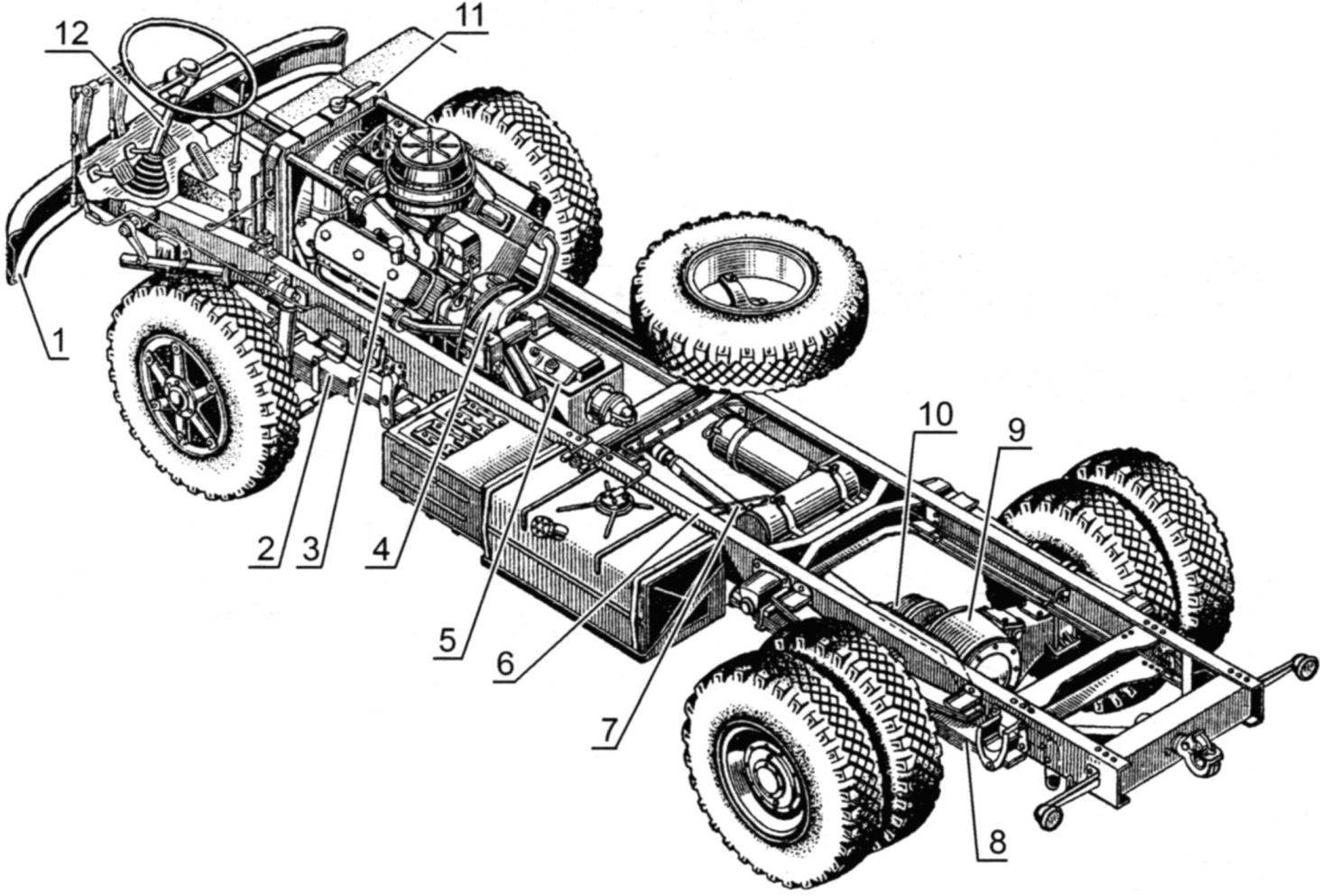 Side truck MAZ-500
The transition to production of the new truck, not unified with the car the predecessor, allowed its creators to introduce into the design of many advanced technical solutions. On the MAZ-500 appeared telescopic double-action shock absorbers, power steering, planetary gears in the hubs of the rear wheels. And, most unusual, is pushed forward cabin, which greatly simplified maintenance and repair of the machine. But a more rational load distribution on the axles allowed to increase the capacity of the vehicle and also reduce the database and the overall length of the car.
The first prototypes of the “beskapotniki” rolled from the gates of MAZ in November 1958 – that was onboard MAZ-500 and the dump truck MAZ-503. MAZ-500 was 300 mm shorter than the “bonnet” onboard MAZ-200, but the platform it was 300 mm longer, and this allowed the MAZ-500 to take on Board cargo at 0.5 tons more than its predecessor. With all that new car MAZ-500 was a spacious cabin with comfortable sleeping compartment. Accordingly, cabover dump truck MAZ-503 had a capacity of 0.4 tons more than conventional predecessor.
In the design process “beskapotniki” Maza designers paid considerable attention to the appearance of these trucks, and first – cabin design with rounded shapes, suitable more for buses than for the Soviet truck at the time. In particular, did not immediately given to the artists-designers of radiator shell – they had to draw and spacetravel least six variants before to make a choice in favor of the most technologically advanced grid with thirteen vertical slits.
And so it became the first production hoodless MAZ, descended from the factory conveyor 16 March 1965.
In addition to layout and design, new truck differed from its predecessor in a fundamentally different engine. Let me remind you that the MAZ-200 was equipped with inline 4-cylinder two-stroke diesel engine with 120 HP, and the MAZ-500 – four-stroke 6-cylinder V-shaped 180-horsepower diesel engine YAMZ-236.
The eight-year gap between the readiness of prototypes of the MAZ-500 and the beginning of their serial production was due to the fact that the Yaroslavl motor plant was able to begin sustainable production of the new V-shaped 6-cylinder diesel engines YAMZ-236 only in 1962.
At the end of 1970 as a result of further improvement of cars MAZ-500 MAZ launched the production of upgraded trucks MAZ-500A, with high technical-economic indicators and meet the requirements of modern trucks. The cabin of new vehicles, as well as cabin predecessors, cars MAZ-500, was located over the engine and could tip forward.
The truck cab is all-metal, spacious, in it besides the driver could easily accommodate two passengers. Behind the seat backs – a place of rest with plush mattress for truck drivers.
Competently crafted interior cabin with radio and adjustable padded cushioned seat, good thermal and sound insulation of the engine reduced fatigue in the driver and created it comfortable to work.
High perfection in the design of the machine and its reliability was confirmed by the assignment of the quality Mark drop-side truck MAZ-500A and tractor MAZ-504-A. 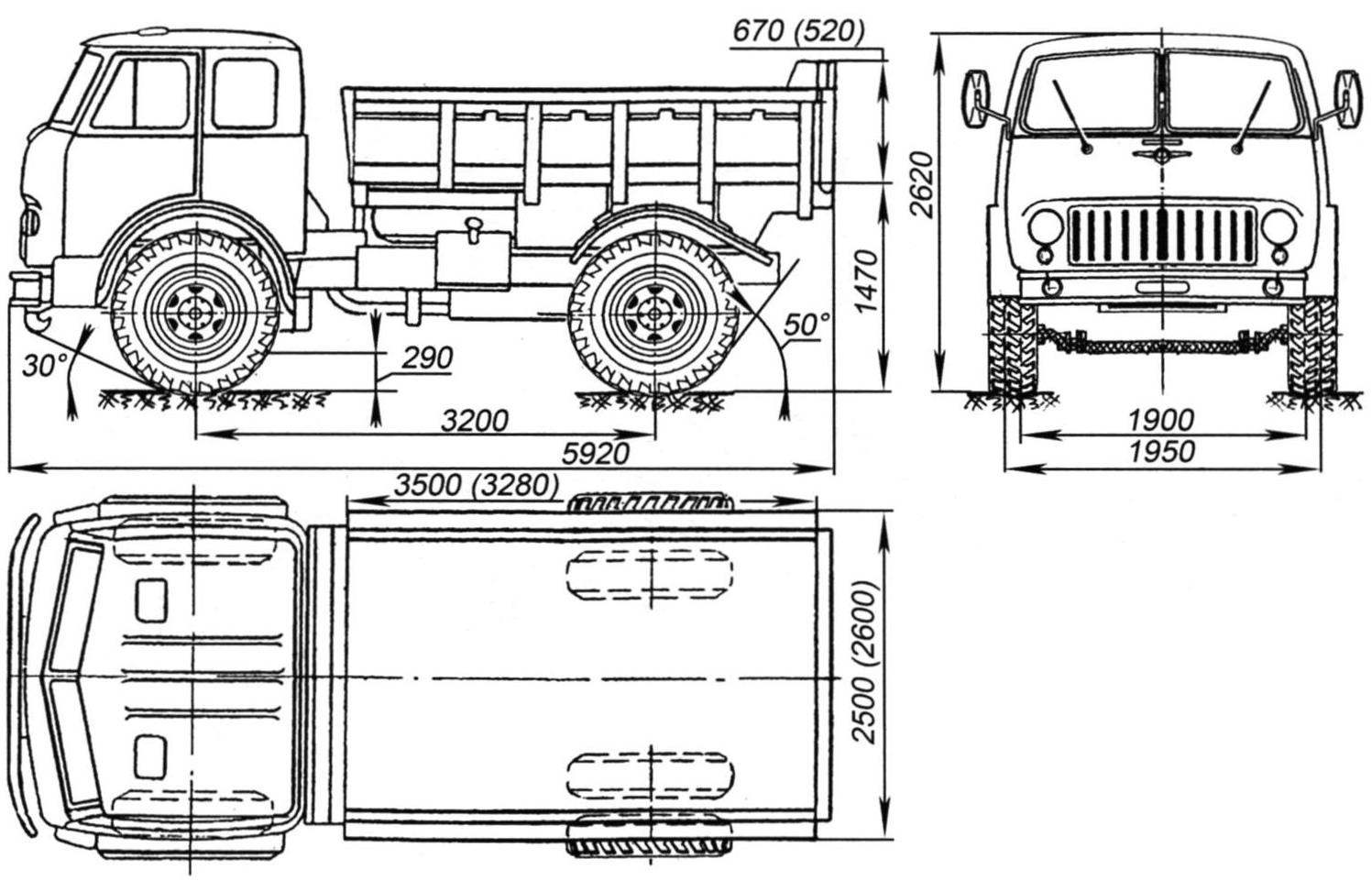 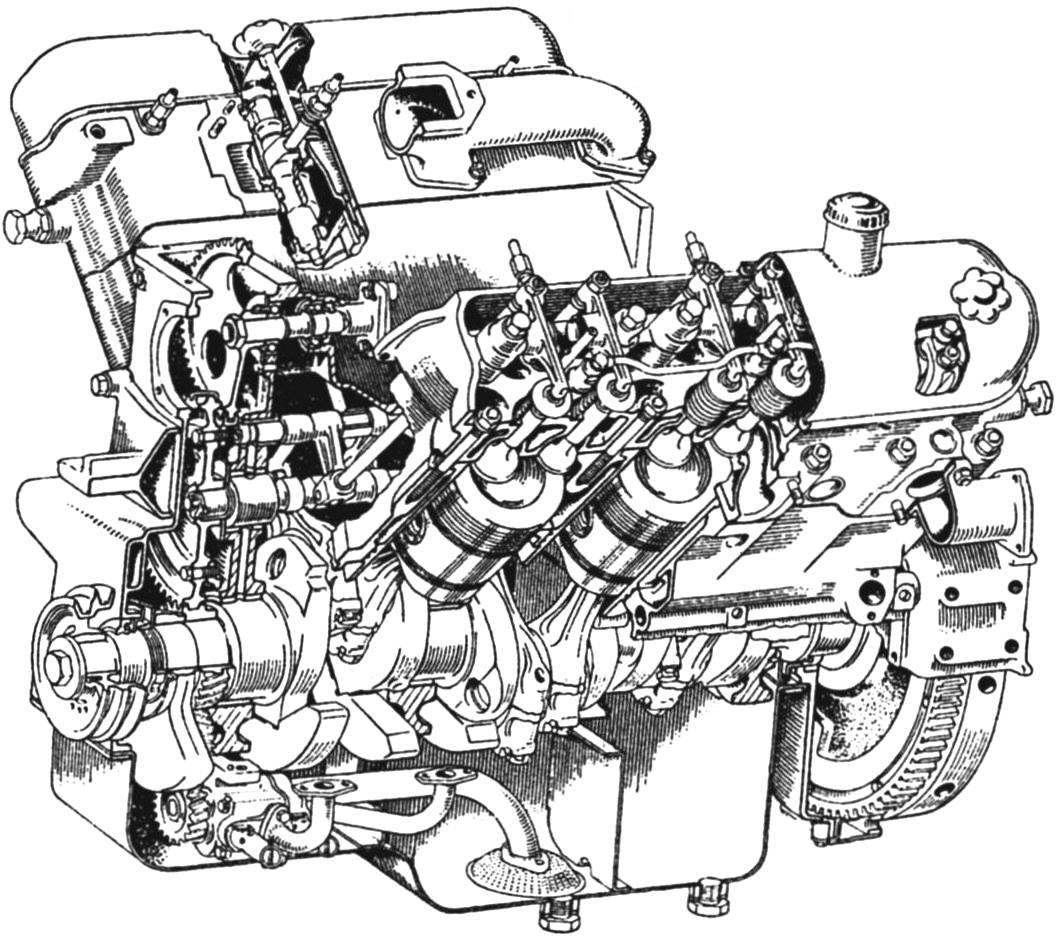 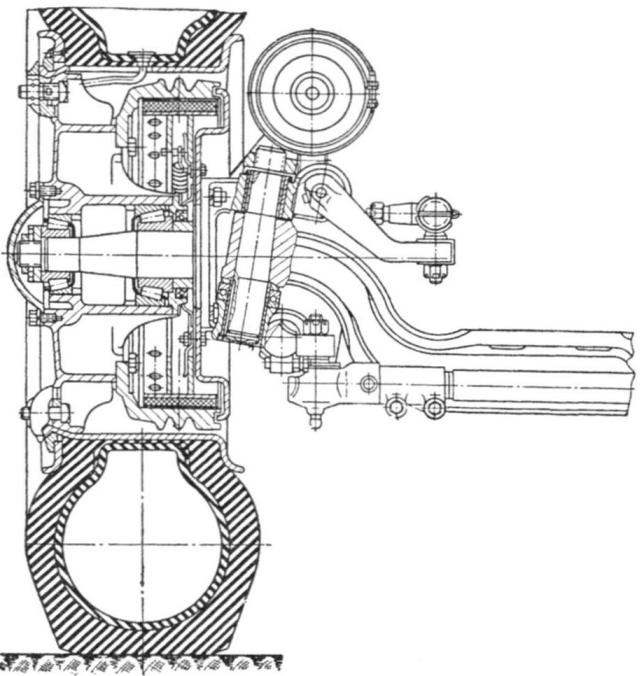 Front axle and suspension of the car MAZ-500 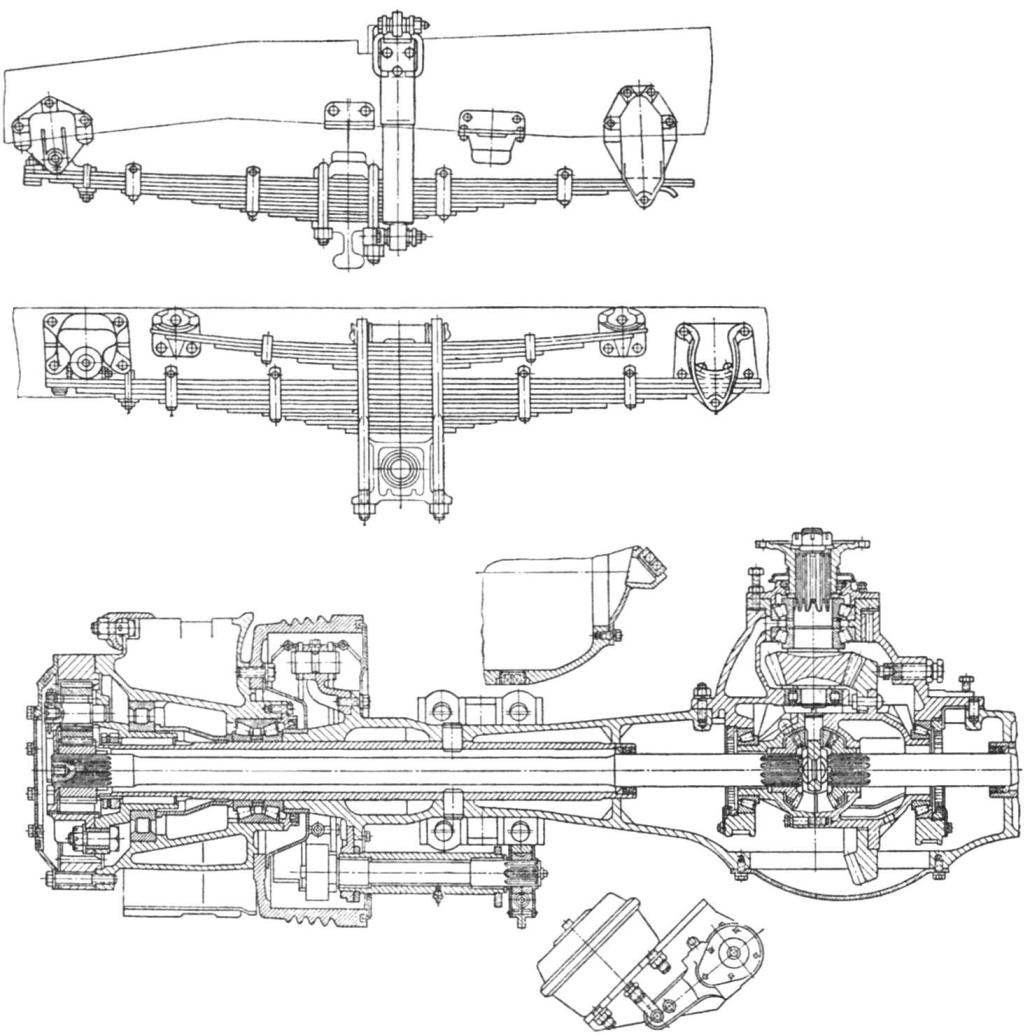 Rear axle of the car MAZ-500
As mentioned earlier, trucks MAZ-500 was powered by a V-shaped four-stroke 6-cylinder diesel engine, YAMZ-236, had a good starting qualities and high efficiency. Electric system provide reliable starting of the engine without the use of preheat when the air temperature is minus five degrees.
On the MAZ-500 were installed single-plate dry clutch with pneumatic booster, and the MAZ-500A has already established increased dry double-disk clutch and transmission with optimally selected gear ratios of transmission, providing higher average operating speed and, consequently, increased productivity of the truck. To facilitate declutching of the design of its drive is also used a pneumatic booster. Shifting “second to third” and “fourth – fifth” was carried out by using two synchronizers.
Main gear MAZ-500 – concrete consisting of a Central conical gear wheel transmission and a planetary gear.
The design feature of the rear axle was the presence of wheel gears in the rear wheel hubs and the Central gear. This design of rear axle provide increased ground clearance, the ability to select the most efficient gear ratios of the bridge.
The front axle is increased the dimension of the pivot group and wheel bearings. Car wheel – diskless characterized by high durability and a very simple mount.
Spring MAZ-500A made of strips of different thickness, which, combined with telescopic dampers, especially the front suspension – greatly improved the driving comfort. 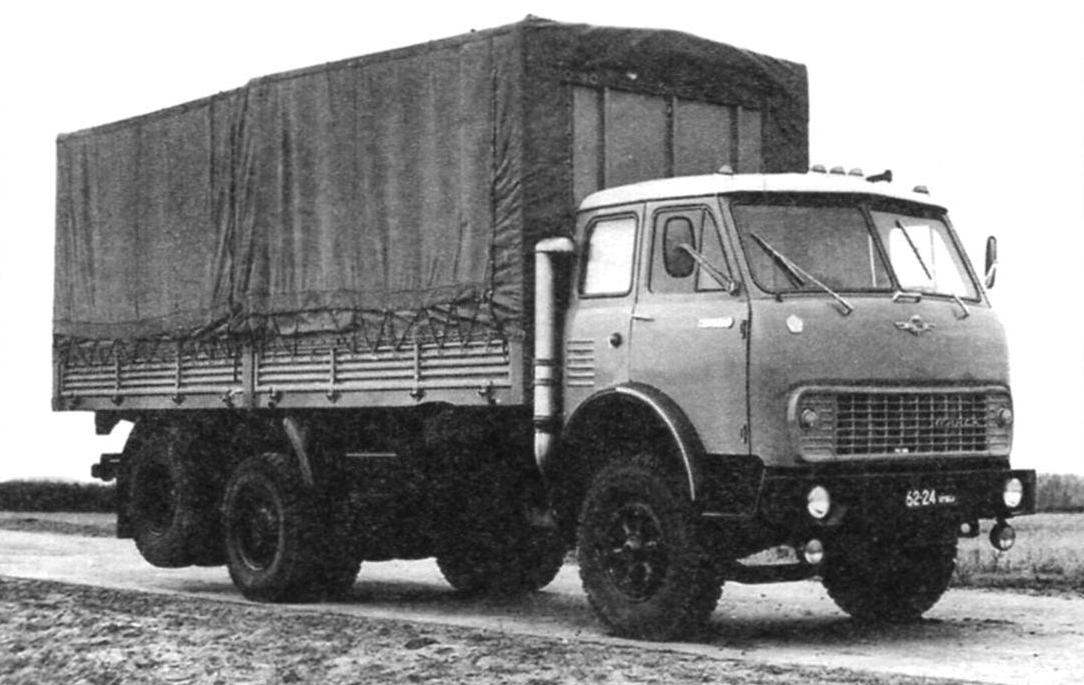 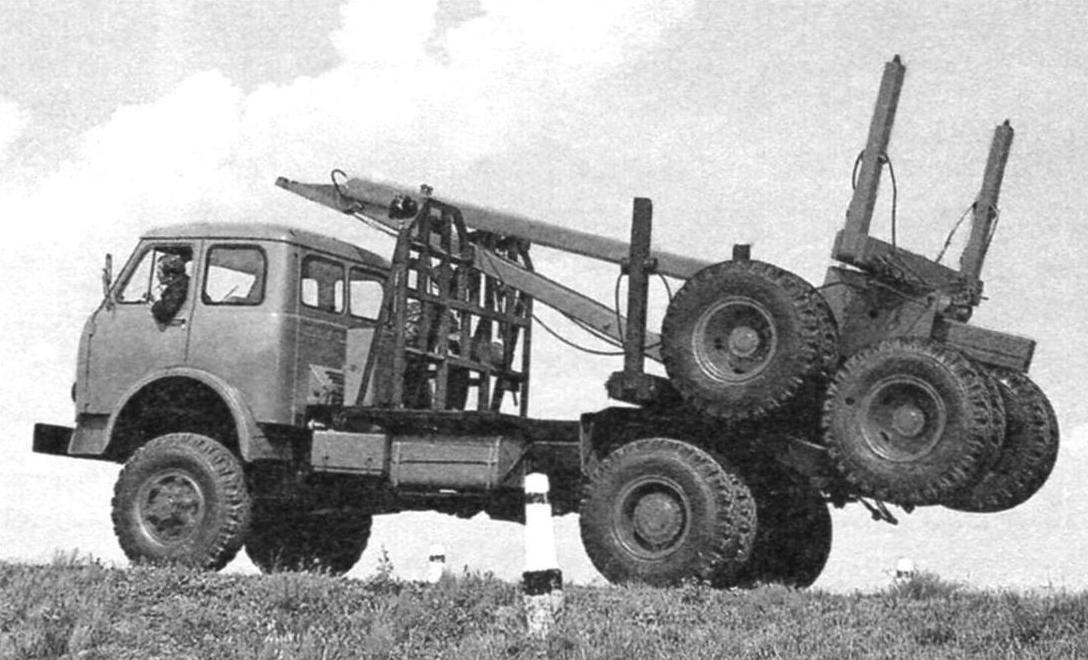 Car-truck MAZ-509А (4×4)
The steering mechanism MAZ-500A provided a lightness and precision car control through the use of rolling balls in a pair of screw-and-nut steering gear, efficient hydraulic telescopic amplifier and speakers with conveniently located steering wheel.
Brake system MAZ-500A provided a reliable and efficient vehicle braking through the use of the compressor, increased performance, brake chambers increased volume and use of rollers in the drum mechanism to reduce friction.
Of the electrical system MAZ-500A was installed an alternator of higher power, which ensured high efficiency of batteries and the reliability of the entire electrical system.