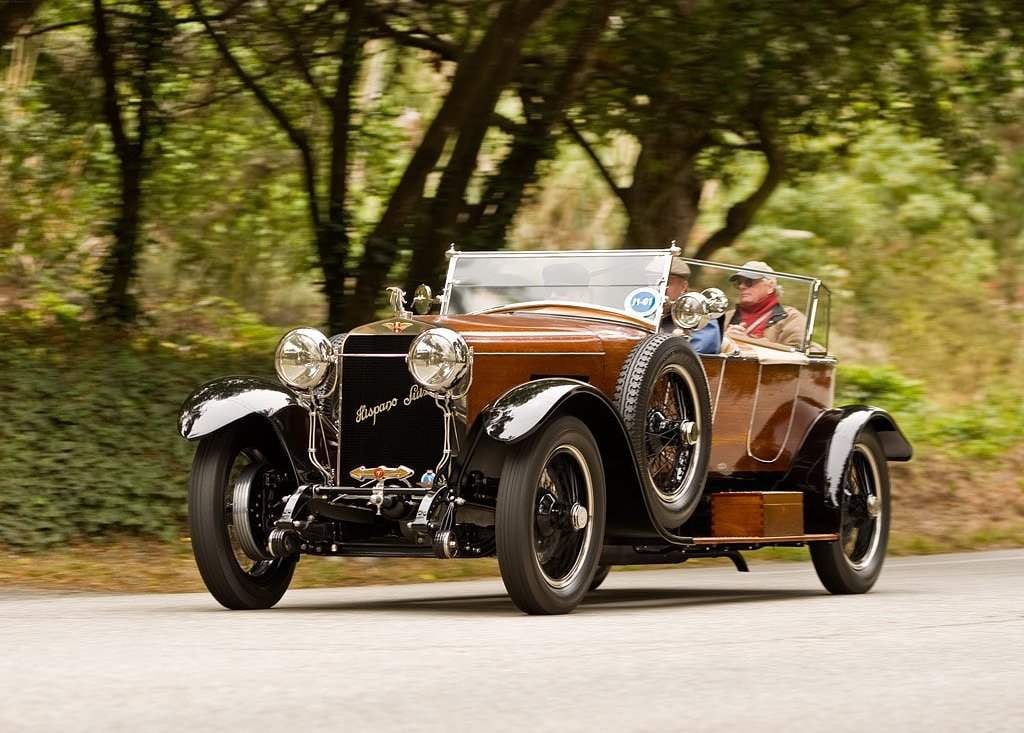 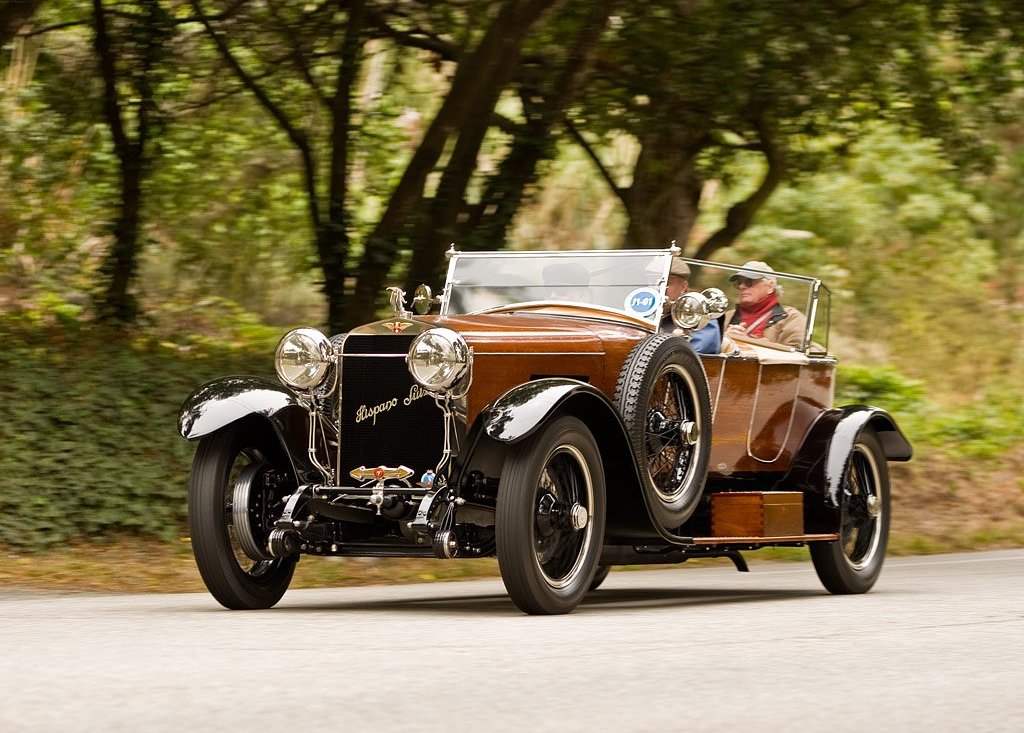 Luxury car with four-seater body “convertible” — a Museum piece. Through the entire radiator inscription: “Hispano-Suiza”. In the top tank of the radiator you can see another emblem. It is also well known — “Skoda”. But… the car is dated 1924, while the Czechoslovak automobile factory “Laurin-Klement” only in 1925 and received the name “Skoda”. And another “but”. On trafaretka under the hood “of the Spanish-Suiza” you may find the word “škoda plzeň” and “Laurin-Klement” (now Skoda) was in the city of mladá Boleslav. Maybe brand mark of the company that manufactured the body, anything to clarify? Here it is. The inscription on it: “Erdmann und Rossi. Berlin.” But the body for “Spanish-Suiza” made mainly by the French company…
What is this mystery?
No there is no Enigma, no error. Machine-building plant “Skoda”, whose enterprises were in the Czechoslovak city of Plzen, before in 1926 became the “owner” of the car “Laurin-Klement”, he built cars. In 1919 he produced tractors, armored vehicles, and in 1924 organized the production of heavy steam trucks and expensive cars, buying a licence from the English company “the sentinel” and the French company Hispano-Suiza.
So, “Skoda” was the one who produced “Spanish-Suiza”, model h6. The scale of production was small — it should be borne in mind that this is a very expensive machine (expensive “rolls-Royce”), and from 1924 to 1928 from the factory gate went 60 chassis, bodies for them were made by the Czechoslovak company “Brožík” and “yeh” and also some German. Eleven copies sold abroad, and five cars remained in Czechoslovakia until now.
The plant “Skoda” was not engaged in the Assembly of French parts and did everything himself, but put on the machines along with their brands and French. 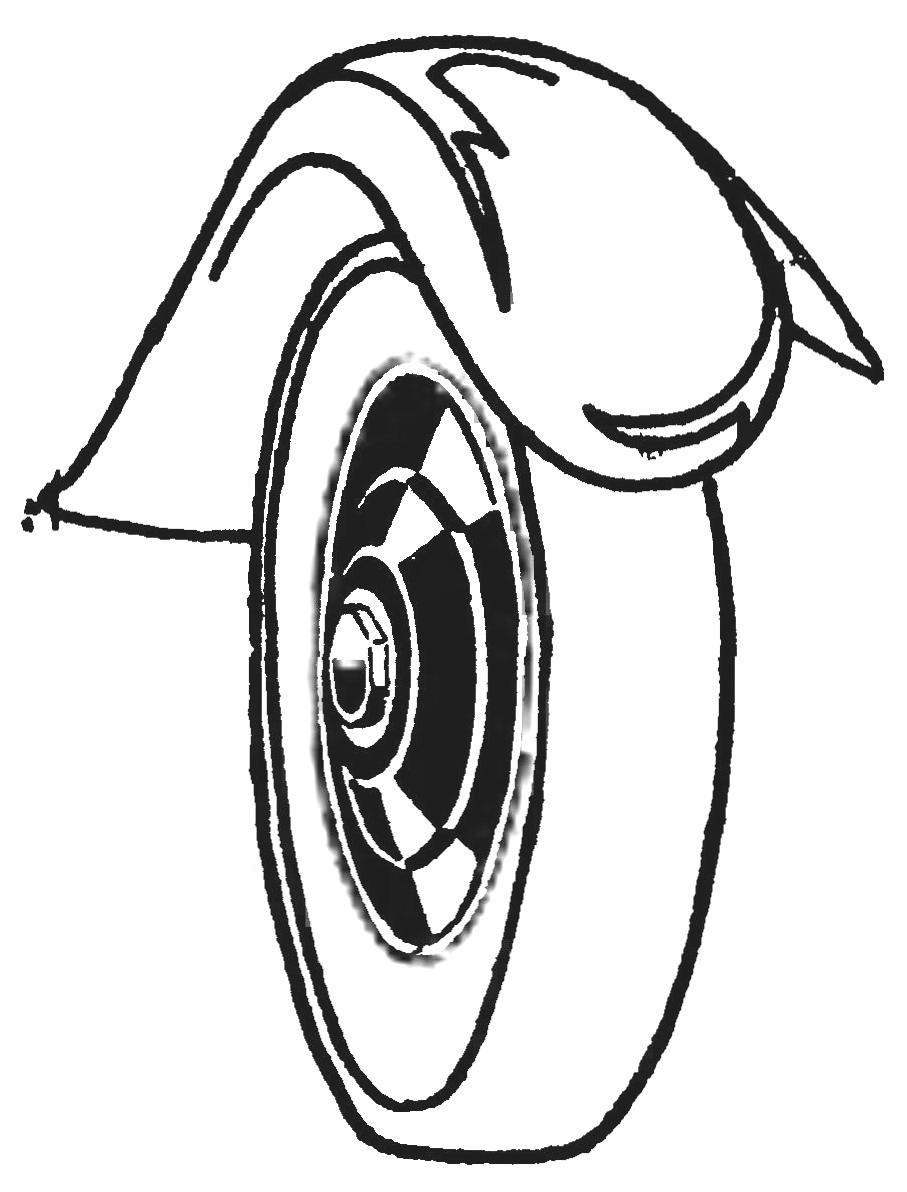 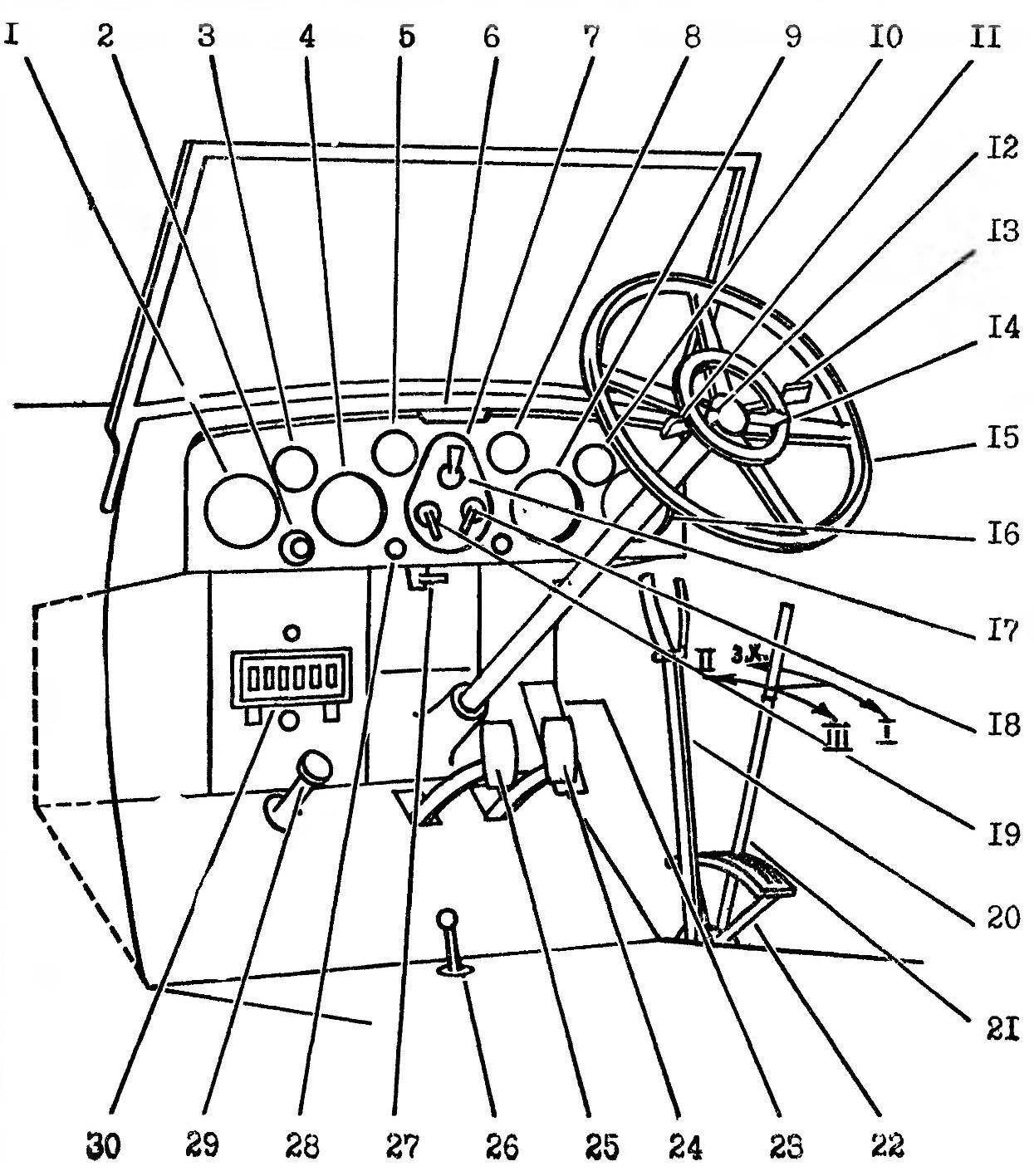 Salon:
1 — pointer of the water temperature; 2 — pump for pumping gasoline; 3 — level indicator of gasoline in the tank; 4 — tachometer (revolution counter engine); 5 — voltmeter; 6 — lamp lighting shield devices; 7 — panel switches; 8 — ammeter; 9 — speedometer and odometer; 10 — oil pressure gauge; 11 — arm (lever) permanent gas; 12 — handle spark advance; 13 and 14 — arm adjustment of the nozzles the idle and working of moves; 15 — steering wheel; 16 — clock; 17 — switch batteries; 18 — the ignition switch; 19 — light switch; 20 — brake lever; 21 — the lever of the change gear; 22 — scenes changes gear; 23 — throttle; 24 — a brake pedal; 25 — the clutch pedal; 26 — the lever of the “free exhaust”; 27 — the fuel valve; 28 — switches distributors ignition; 29 — the pedal starter; 30 — panel switches to control the spark plugs.
Will look at more example of “Skoda-Hispano-Suiza-h6”: a car, which is considered one of the engineering masterpieces of the automotive industry. Let’s start with the engine. If you raise the hood, you can see the shining aluminum casting motor (6697 cm3, 135 HP at 3000 Rev/min), with a black enameled valve cover. His Carter with the so-called “wet” liners, camshaft located in the cylinder head, durable semypolky crankshaft, perfectly balanced six-cylinder scheme are direct descent from the aircraft engines Hispano-Suiza during the first world war. By the way, one of the engines of this brand was equipped with a fighter “SPAD”, the famous French ACE, captain Georges Guillaume. His squadron had its own emblem — flying stork, and after the death of Guillaume, she was accepted to. “Spanish” — so in abbreviated form called the firm the French.
But I will continue the story about the “heart” of the machine. The lower part of the crankcase had developed to the side the tides that blocked the entire space between the motor and the frame, forming a kind of shield, preventing the ingress into the hood space of dirt and water. The inner surface of the refrigerating pipes to prevent corrosion were enameled by using a proprietary method that constitutes a trade secret.
Cylinder liners, in order to achieve high wear resistance and durability, subjected to a special impact, providing the hardness and strength of the surface layer. This is quite effective, but Costly process later became known as nitriding and was used mainly in the production of cylinder liners for tank and aircraft engines.
Was very interesting and the gap adjusting mechanism in the valve mechanism, two toothed washers, and compressible spring. By the way, such a device could be found and Soviet diesels-2, which was equipped with the famous T-34 tanks and KV.
Further acquaintance with the engine “Hispano-Suiza” will bring us a lot of interesting surprises. So, the engine was fitted (in 1919!) dual carb with remote adjustment of the composition of the mixture, which was carried out by two levers on the steering wheel. And under the instrument panel studded with dials and switches (like on a plane), was located the mystery box panel which was located six switches. They could test all of the candles, alternately disabling every. And if we talk about the ignition system, we note that to improve the reliability it had two candles on the cylinder and two batteries. Finally, the machine N6 remarkable dynastream site, which was both a starter and generator.
“Hispano-Suiza” had a wonderful at the time dynamic performance. Its speed was 130 — 137 km/h, and acceleration from a standstill to 80 km/h required 21 C. as a high-speed and heavy (2 tons without any load) the car, of course, need powerful brakes. In those years rarely used the brakes at all wheels. This machine they are. For better cooling drums made of aluminum with a strongly developed ribs (later this design was widely used on racing cars) and pressed on a cast iron ring.
To drive brakes of the machine, which weighed with four passengers and a full tank of more than 2.5 t, the brake pedal required a very significant effort. Vacuum boosters in the brake system had not yet been used, and the designers used the original mechanical amplifier of the frictional type. 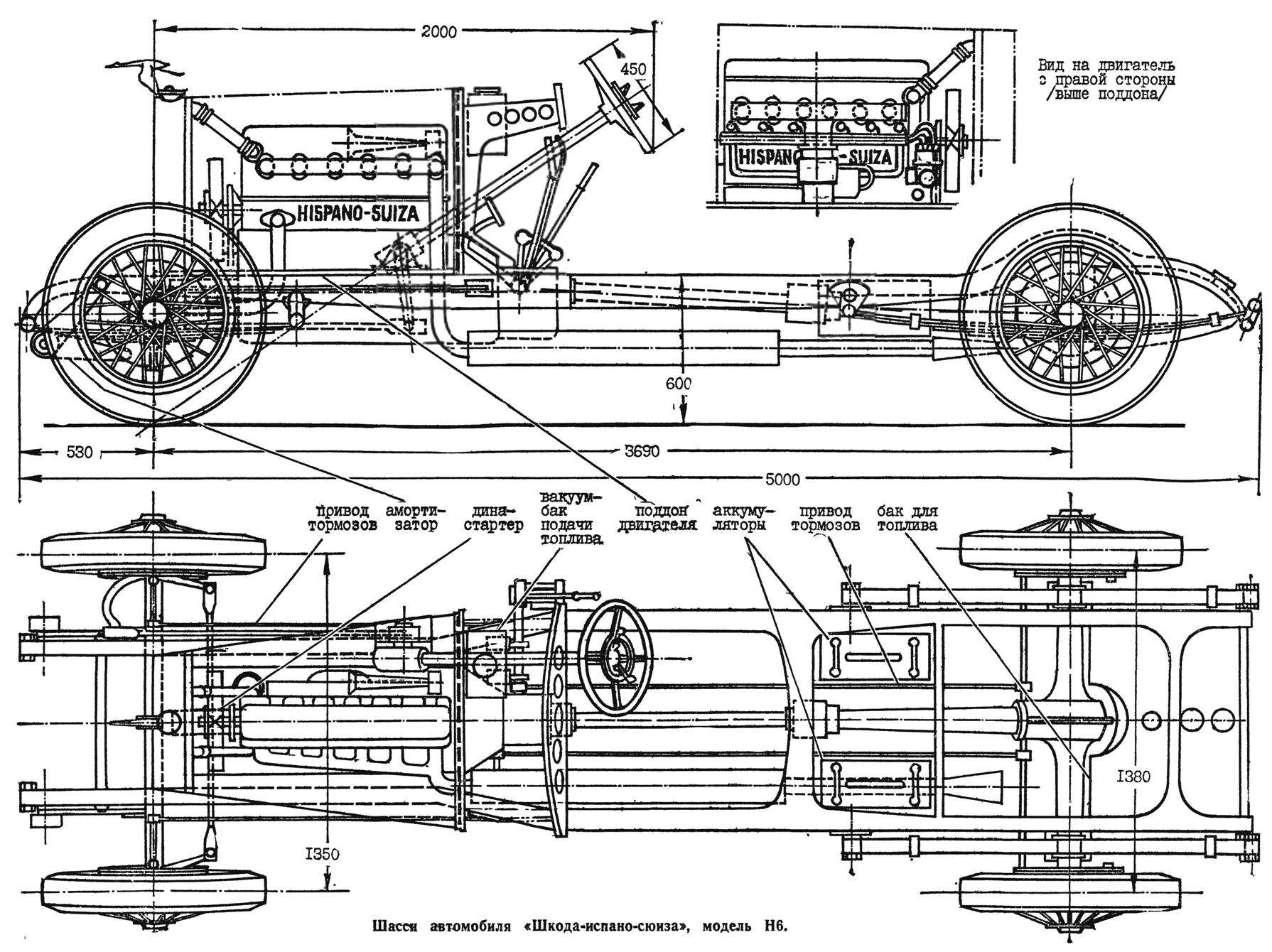 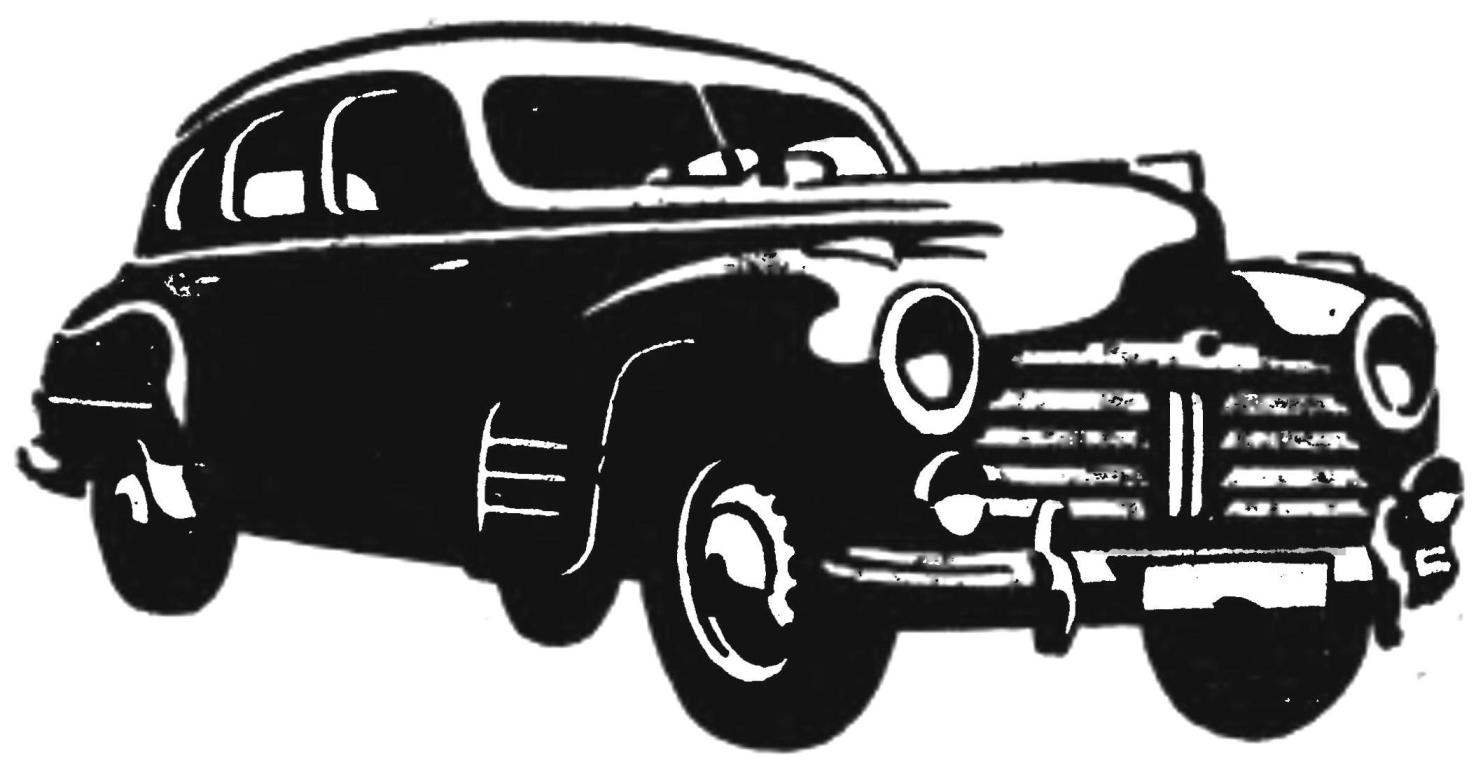 The last passenger car “Skoda” with a six-cylinder engine (1946).
Of the body most often installed type “coupe Deville” (see box). The driver was “on the street”, and the passengers were placed in a closed cabin. For communication with the driver served as an intercom. Along with this type of body was used and so-called “landole” — also 4-5-seater, but with a folding top over the rear seat, two-door, two -, and four-body type “Roadster”.
In 1922-1923 saw the light of the two sports modification “of the Spanish-Suiza-h6”. They were called “Monza” and “Boulogne”. Both had chassis with a shortened (instead of 3380 mm 3680 mm) base, double open bodywork and more powerful engines. At first the displacement was raised to 6863 cm3, power — 200 HP Respectively, increased the speed to 145 km/h — at “Monza” and 170 km/h — at “Boulogne”. However, released these cars had very little: “Boulogne” only existed in 24 copies. But its engine by the end of the 30’s were often assembled-to-order chassis ordinary passenger “of the Spanish-Suiza”.
In the history of “Skoda” period of release “Spanish” was definitely an interesting page. But her predecessor, “Laurin-Klement” was no less significant milestones in the biography.
So, in 1908, the designers of the plant in mladá Boleslav has created a very promising car model with eight-cylinder engine.
But in the early twentieth century, many car factories, mainly producing expensive cars, came to the conclusion that the six-cylinder engine is the optimal balance and not so dear and complicated to manufacture, as the eight-cylinder. That’s why in 1909, “Laurin-Klement” preferred “six”, ahead in this respect for ten years, even “Spanish-Suiza”. 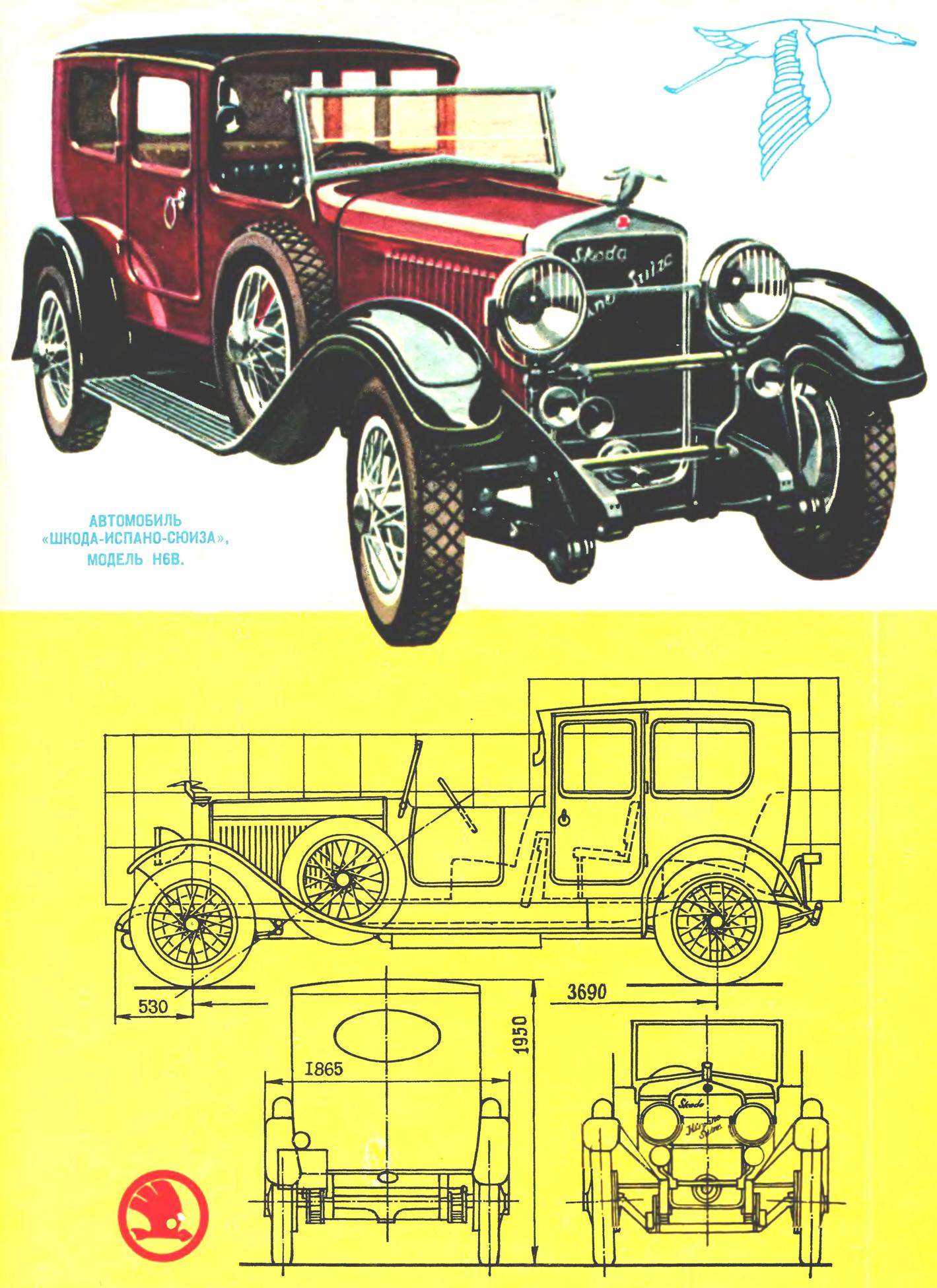 The last Executive car brand “Skoda” refers to 1946. This machine was called the “Skoda-super-3000” and had a six-cylinder 80 HP engine cylinder capacity of 3140 cm –3. She weighed 1850 kg dimensions were similar to modern “Volga-GAZ-24” and developed a speed of 125 km/h.
Later the plant “Skoda” began to specialize in the small car. Six-cylinder motors he builds now only for trucks. One of its latest diesel engines, a working volume 11946 cm3, equipped with overhead and more than twice as powerful (288 HP) motor luxury “Skoda-Hispano-Suiza” sixty years ago.
RECOMMENDATIONS FOR MODELING
Cars Hispano-Suiza was a kind of “white elephants” among the cars of 20-30 years. They were original not only in design and quality, but also for finishing. Therefore, to build the model it is necessary with special care. You must pay attention to the production of multiple small parts: struts headlights, lanterns, door fittings, windscreen, wheels, as accurately as possible to simulate mirrored glass (probably plexiglass here will not help) and high quality varnishing of the body.
Wheels are a very important element from the point of view of the correct visual perception of the model; “the Spanish-Suite” used tangentia wheels. To make them easy — each wire 24 spokes, arranged in two rows. Those who spoked wheels are not on the forces, should know that separate parties, “the Spanish-Suiza” wheels closed speed Nickel-plated decorative caps From the hood peered a Central octagonal wheel nut. The inner part of the wheel is “filled with” the brake drum of large diameter. In the space Between him and the rim spokes could be seen only when not raised decorative cap.
Two spare wheels were placed in a leather case, from which was visible only the Central nut.
“The Spanish-Suite-N6” no buffer, and therefore the front next to the fangs of the frame clearly stood out friction shock absorbers. Characteristic features — very high and large slit vents in the sides of the engine hood, the tread of the tire at a large oblique cell, two-tone paint of the bodywork (the bonnet top, roof and wings are dark, the body light).
The Modeler must take into account such things as the connection of the sidewall of the hood with its upper part close to the rivets; protruding above the surface of the body of the outer loop of the door; seen on several samples of aluminum unpainted cowl of the engine; smooth, without a pattern, glass headlights.
In the manufacture of models with a body “coupe de Ville” or “Lando” we need to pay attention to the thoroughness of the equipment of the driver’s seat: located to the right black wheel with four spokes and with four levers on it, a large number of devices on the right side of seat gear lever, leather upholstery seats “bars”.
Finally, the radiator. It was Nickel-plated, with black core. “The Spanish-Suiza” built by factory “Skoda”, on the upper radiator tank and the wheel is a traditional symbol of the winged arrow in a circle. Logo can be imprinted on photographic paper and enclosed in a turned clip.
L. SHUGUROV