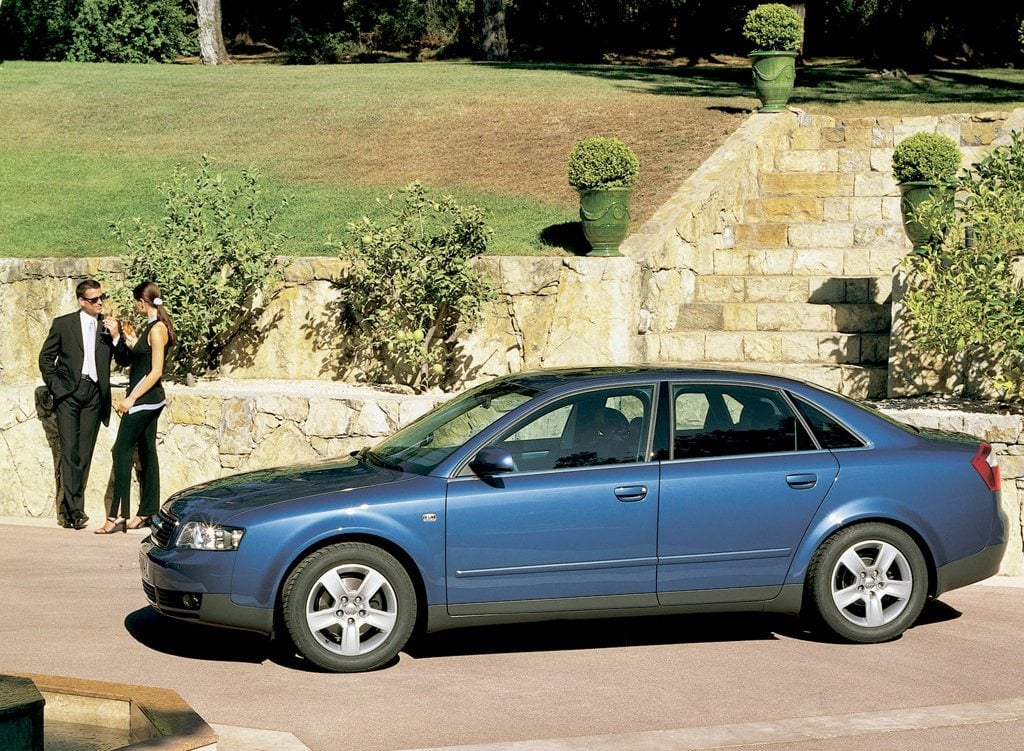 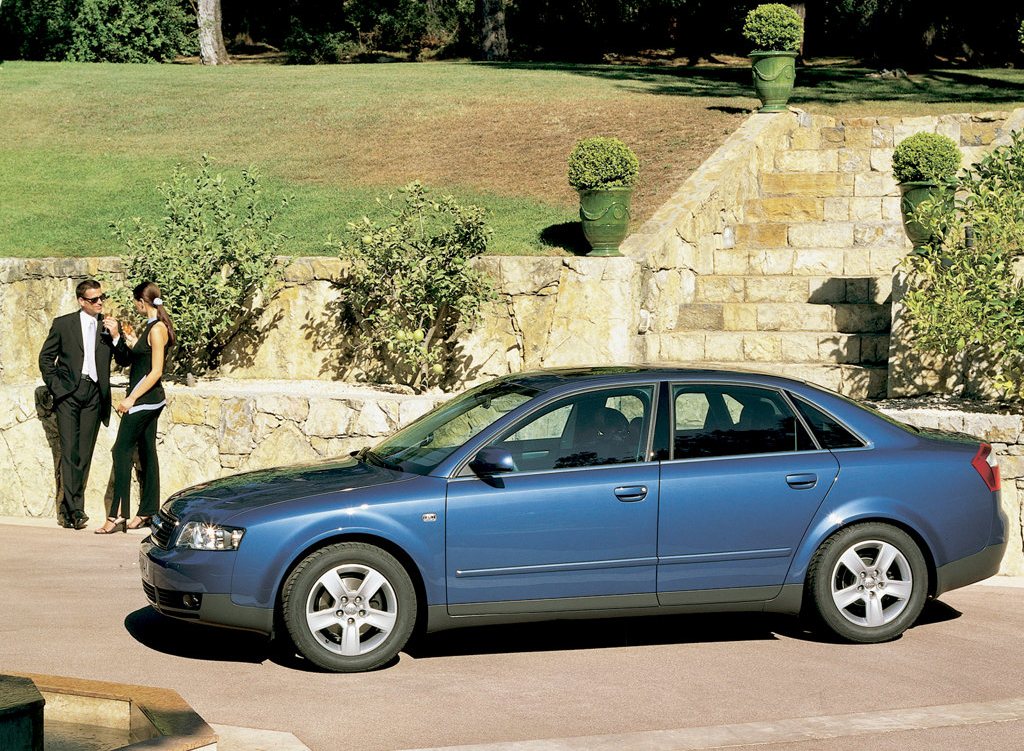 Middle class car AUDI A4. Firm Audi appeared in 1910, when August Horch, who had, according to his contemporaries, a very obstinate character, did not get along with his partners, who owned with him a company Horch in Zwickau (Saxony). In the end, the A. Horch had to leave his own company and founded in Zwickau another firm with the same name. Last, after the judgment of the court was renamed to Audi, which in Latin meant the same as Horch in German — “listen”.

The first model of the new company has won numerous athletic prizes. In particular, already in 1911 AUDI with an engine displacement 2600 cm3 in the race for the Cup of the Alps in Austria went the entire distance with no penalty points.
Especially the big success of buyers used car AUDI-C four-cylinder engine working volume of 3500 cm3. But the most popular of the A. Horch cars in the 20-ies of the last century became AUDI-K with 50-horsepower overhead valve engine with a displacement of 3500 cm3. Behind him in 1924 was followed by the AUDI-M with a six-cylinder engine, and in 1928 the gate of the company left AUDI-R IMPERATOR with an eight-cylinder engine working volume 4872 (!) cm3. This car was the last Audi own design, as soon this company merged with the car-, ing the DKW firm.
In 1932 the German firm DKW, Audi, Horch and Wanderer joined in the automobile concern Auto Union. The first collaborative work of the group was a series of front-wheel drive, the AUDI FRONT. The idea of front-wheel drive for mass car belonged to the founder of DKW Jorgen Rasmussen. Despite considerable difficulties in the development of new models, the machine worked well with the buyers and was produced until 1938. AUDI FRONT front suspension was by wishbones and a transverse spring. Engine in-line, six-cylinder, displacement 2257 cm3 and a power of 50 HP transmission — manual, four-speed. Frame — longitudinal box girder. Body type — convertible or sedan. Maximum speed front-wheel-drive AUDI FRONT 105 km/h. 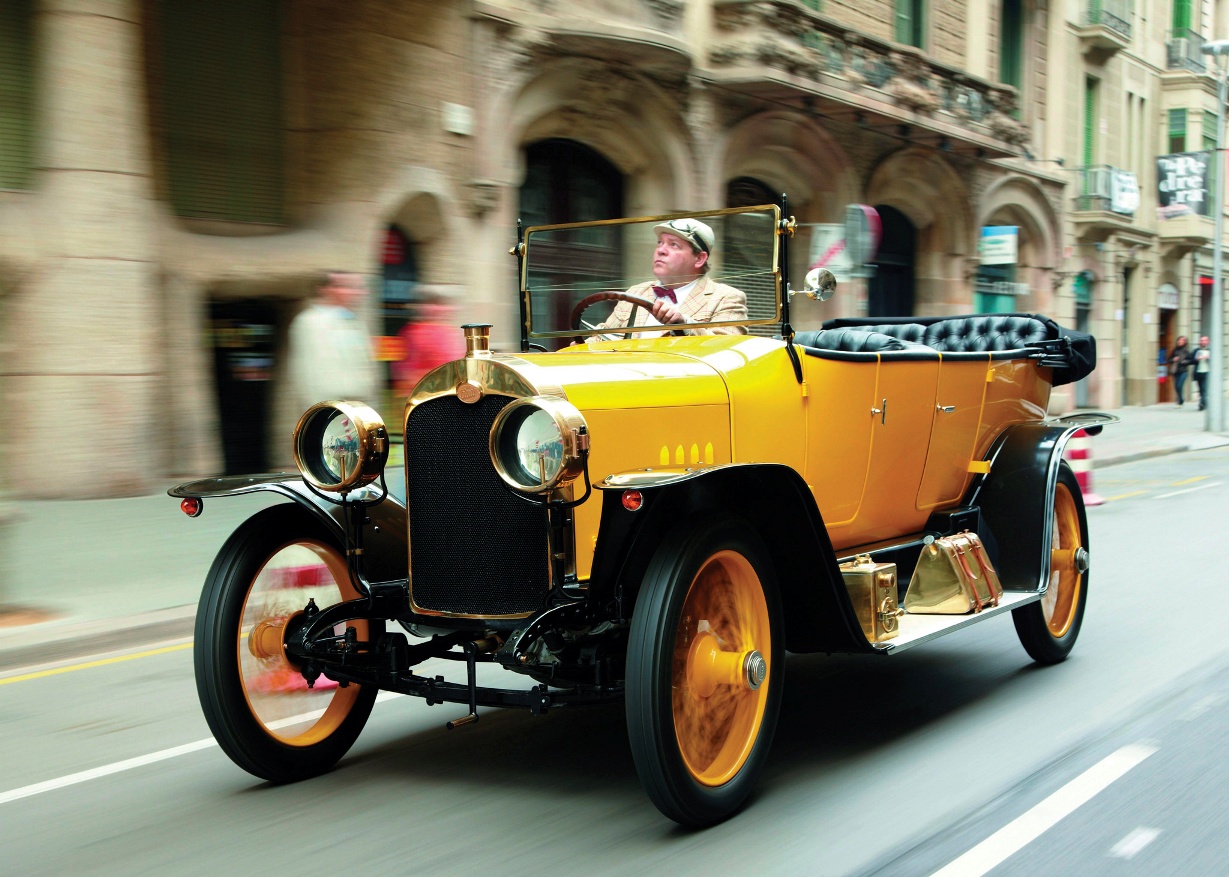 AUDI-ALPENSIEGER S (conqueror of the Alps — it.) 1914 design August Horch has won a number of victories in competitions in the Alpine Cup 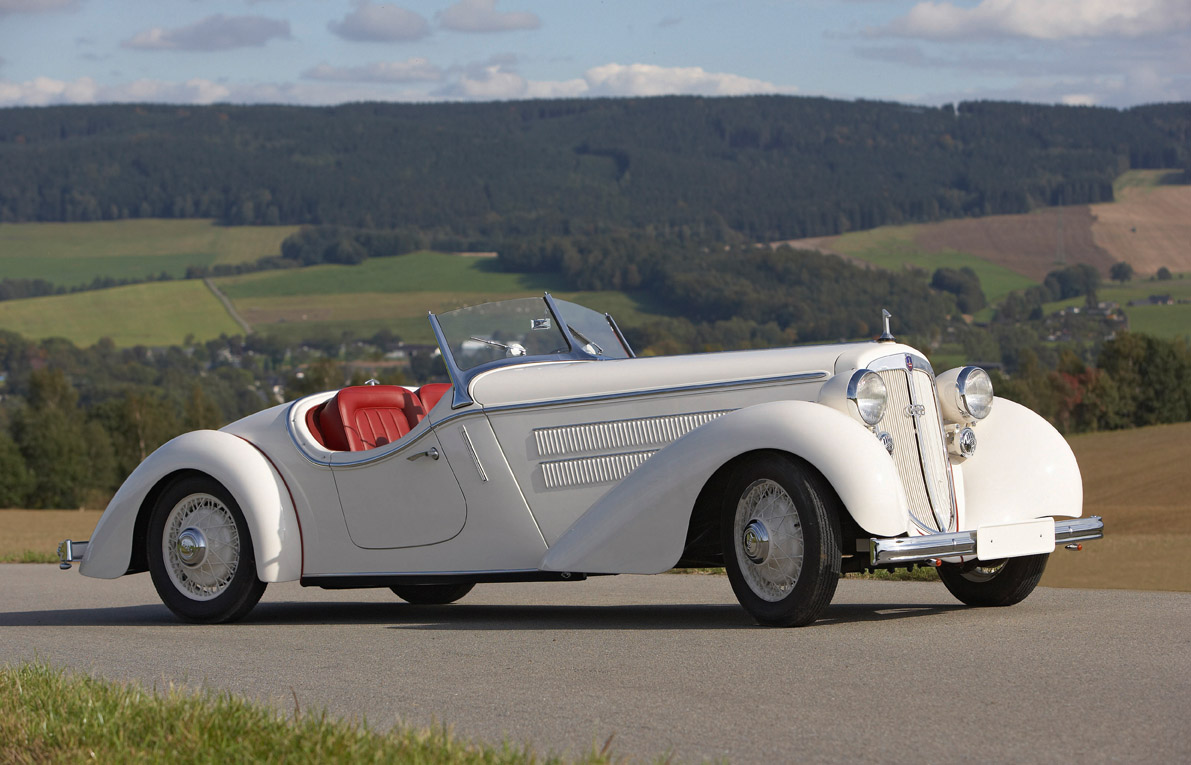 AUDI FRONT 1935 — one of the first popular front-wheel-drive vehicles
At the same time was produced the traditional version of — AUDI-920 with a six-cylinder engine working volume 3281 cm3.
During the Second world war, the concern produced staff cars, light artillery tractors, ambulances, etc.
After the war, the Zwickau became part of the GDR. The Audi factory was nationalized and later on it was organized production of the subcompact, plastic-body TRABANT. And AUDI brand temporarily disappeared company Auto Union produced the only cars under the brand name DKW.
It appears that the iconic minicar, which is closely associated with the emergence and demise of the GDR, deserves a more detailed story.
In 1949 on the basis of the German factories of Audi and DKW were having a “people’s IFA company” that manufactured cars IFA F-8 and IFA F-9 similar to cars DKW pre-war issue. But since 1959 at the factory in Zwickau was organized the production of two-door front-wheel drive car TRABANT with two stroke inline engine, with a displacement 499 cm3. In 1963, the machine was modernized, increasing the engine capacity to 594 cm3, and in 1979 there appeared the open car version TRAMP. After the reunification of Germany in 1989, manufacture of cars of small ceased, and the company was acquired by Volkswagen.
But in West Germany in f. “58 year the company Auto Union came under the control of Daimler Benz, then in 1964 became the property of Volkswagen. A year later, the AUDI brand was reborn in front-drive AUDI 1700 engine power 72 HP By the beginning of 70-ies, when there was a merger of Auto Union and the NSU company, there were a series of car AUDI 60, AUDI 75, AUDI 80 and AUDI 100. And established in 1980 the QUATTRO all-wheel drive modification, repeatedly achieved success in the international rally, the AUDI brand has brought well-deserved respect in the automotive world.
The initiator of the release of AWD passenger cars AUDI was the engineer Ferdinand Piech, who believed the transition to a passenger car all-wheel drive is quite a natural stage in the development of the car. That is why the emergence of mass all-wheel drive AUDI is a revolutionary step in the development of the company.
Base for four-wheel drive versions was the standard front-wheel drive car company. In unit with the transmission mounted transfer case with differential distributes the torque at the axles of the vehicle. There was initially a mechanism to enable and disable the rear drive. 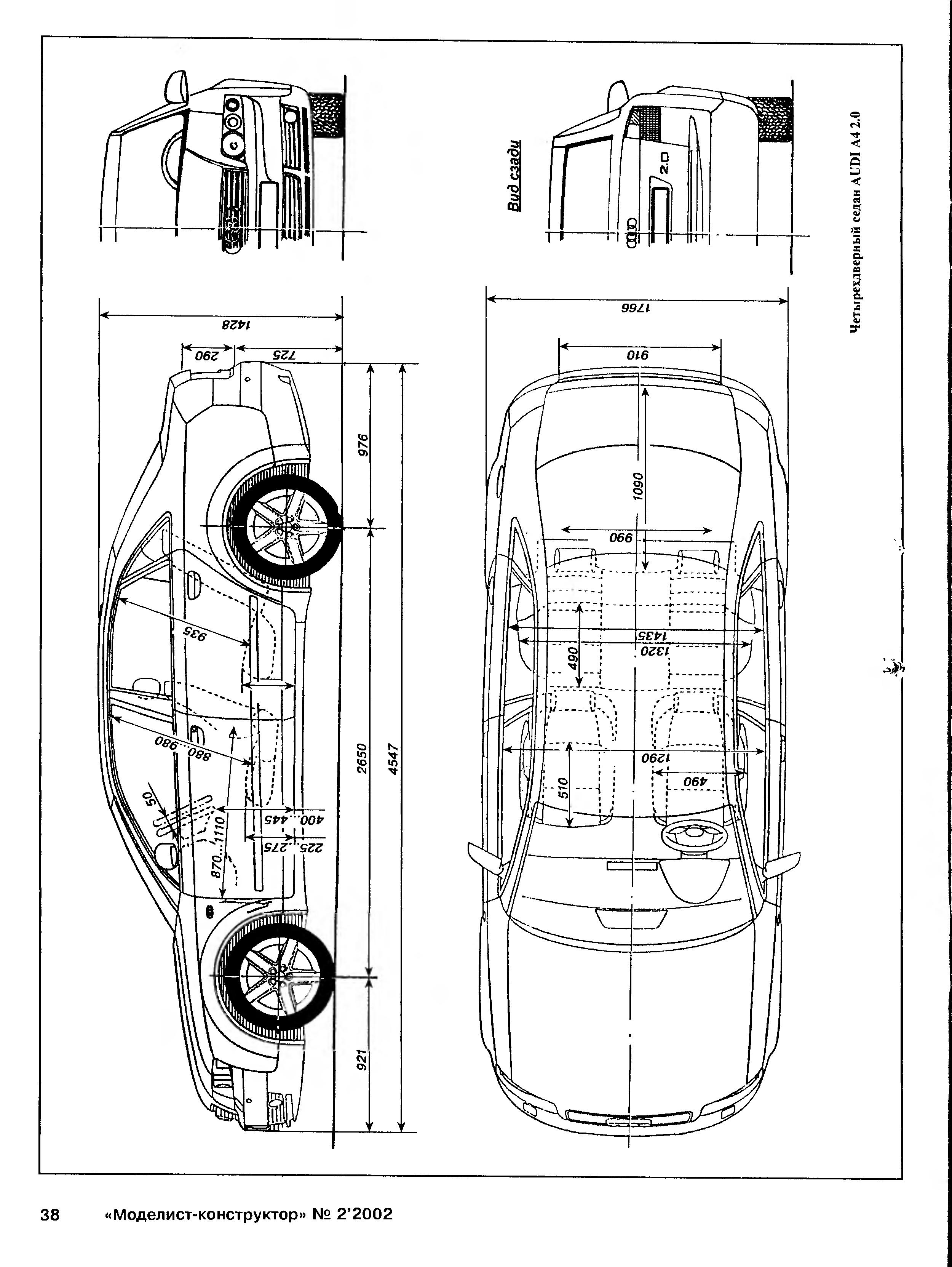 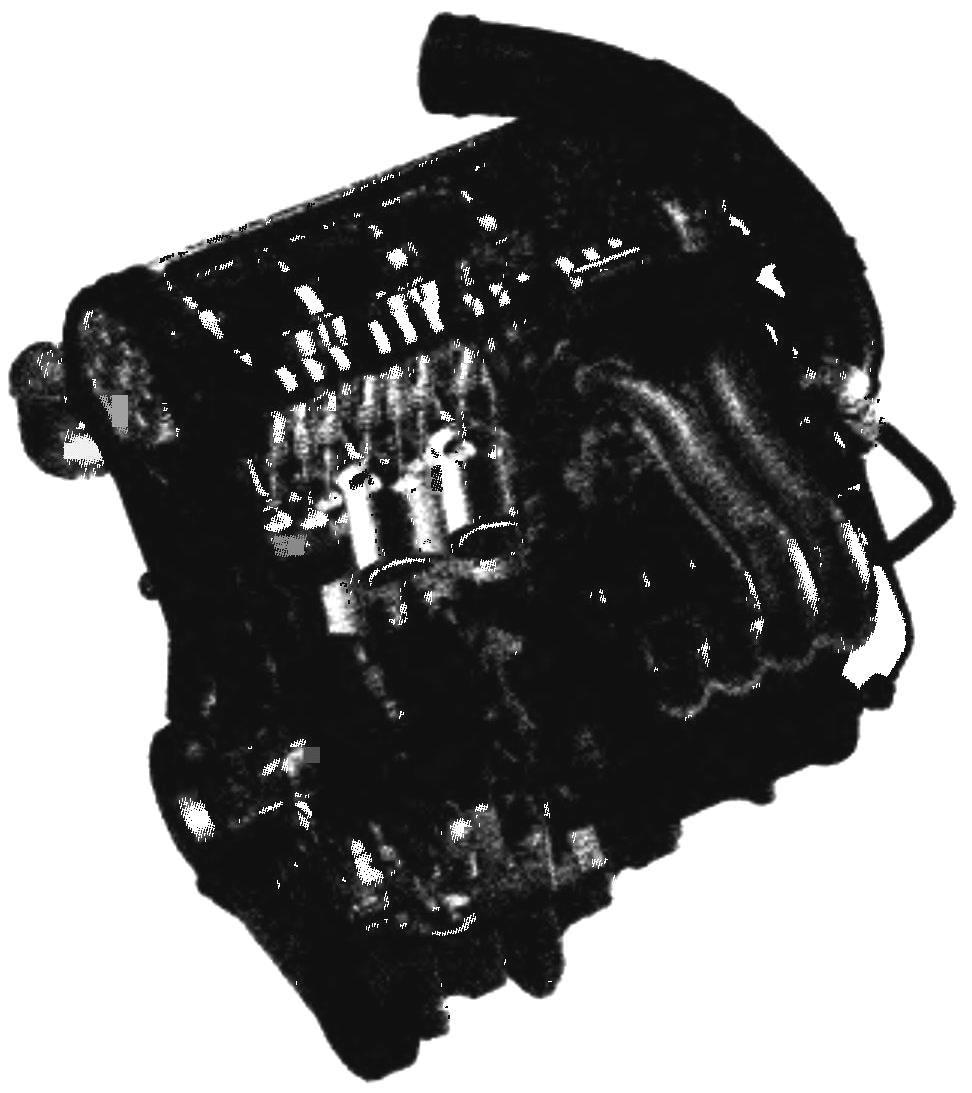 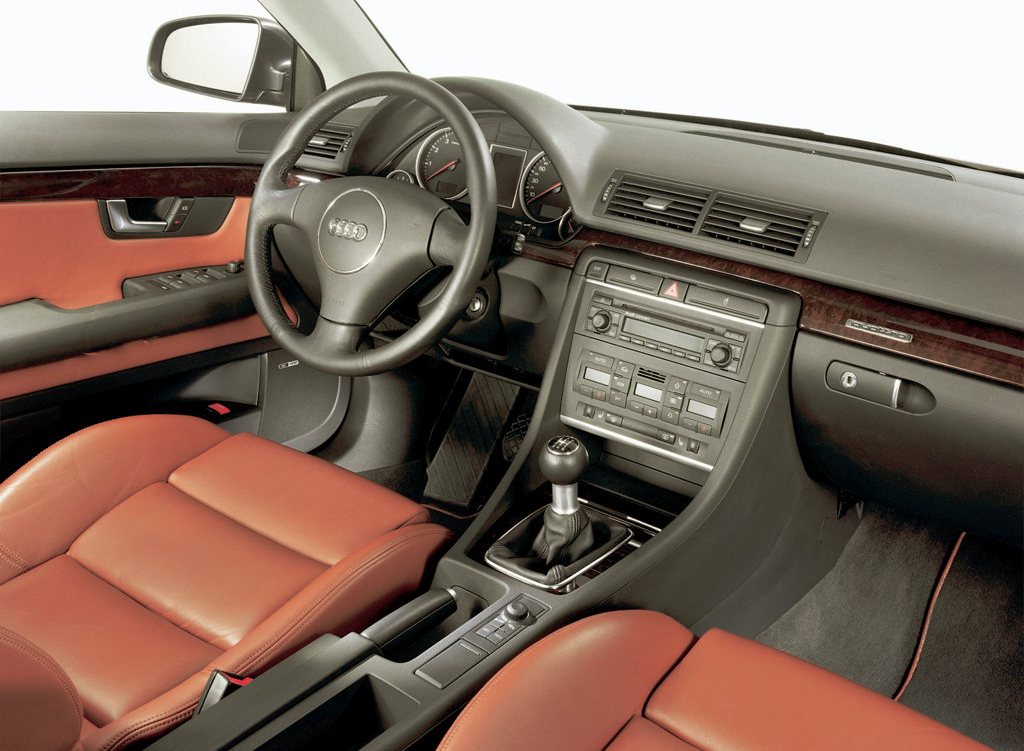 Oborudovana the driver’s seat
The four-wheel drive AUDI QUATTRO was installed 5-cylinder turbo engine displacement of 2144 cm3 and a power of 200 HP at 5000 rpm gear Box mechanical, five-speed. Front suspension — type “Mack fearson” with the stabilizer. All brakes are disc, front — ventilated. Body carrying, like a two-door coupe. The maximum speed of 222 km/h.
In 1984 was the last in the last century, the reorganization of troubled firms — NSU Auto Union was renamed simply Audi.
Today Audi produces a wide range of front wheel drive cars of all classes with engines of cylinder capacity from 1400 to 4200 cm3. The smallest in this range, created in 2000, the compact AUDI A2 with a five-door body. The middle class was represented by the AUDI A4, which became one of the most popular German cars. In the A4 series included numerous variations with engine displacement up to 1596 2771 cm3 and a capacity from 90 to 193 HP, including QUATTRO four-wheel drive, and utility AVANT. Series AUDI A4 very organically Supplement the more powerful AUDI A6 with four – and six-cylinder engines displacement from 1781 to 2771 cm3 and a power of from 110 to 193 HP
However, let’s talk more about the design of the AUDI A4. In principle, this is a classic front wheel drive car with a steel body and four-cylinder dvadtsatiletnim motor. The engine block and cylinder head cast from an aluminum alloy. It is stamped and levers front and rear suspensions. By the way, the Quartet uses a multi-link rear suspension, while on earlier versions installed a simple pendant with the associated levers.
The Quartet was established 6-cylinder engine with V-shaped spaced cylinders, a displacement of 2976 cm3 and a power of 220 HP at 6300 rpm With this engine AUDI A4 accelerates to 100 km/h in 6.9 and top speed is 245 km/h. Average fuel consumption is 9.5 l/100 km. 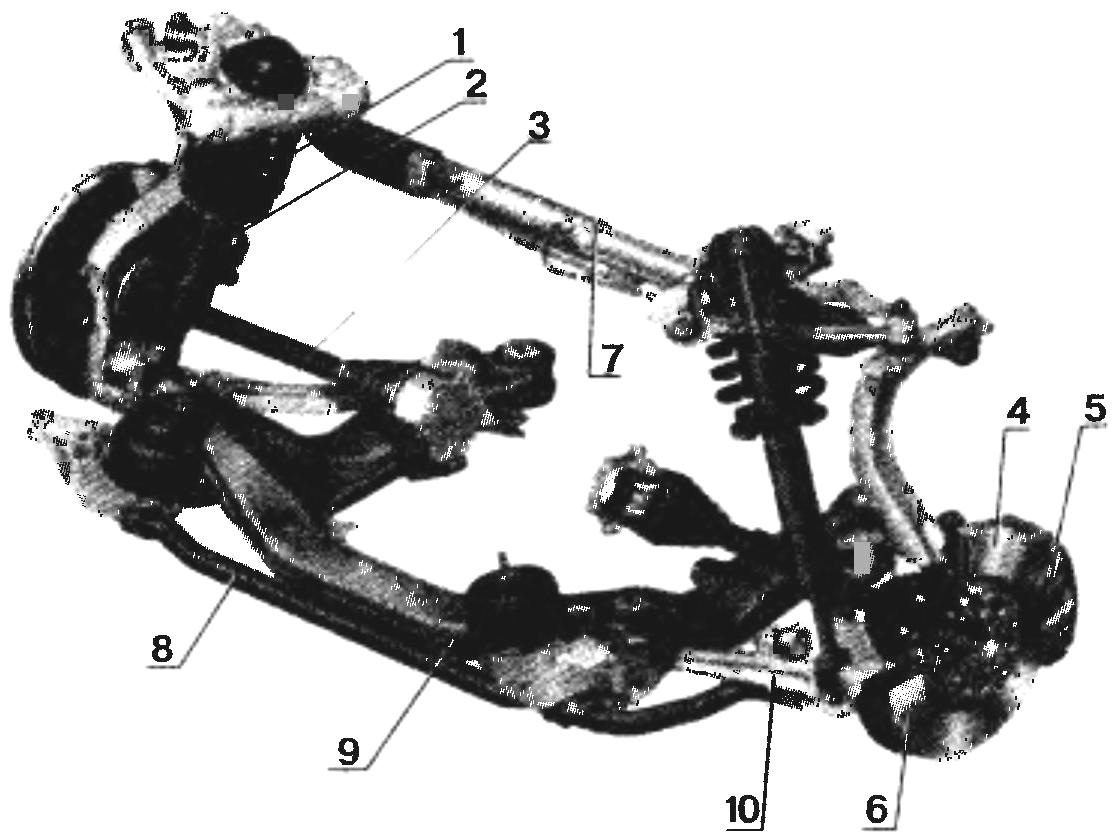 Front suspension for AUDI A4:
1 — coil spring suspension; 2 — two-tube shock absorber; 3 — shaft front wheel drive; 4 — ventilated brake disk; 5 — brakes; 6 — a casing of a brake disk; 7 — rack and pinion steering gear; 8 — stabilizer; 9 — damping cushion; 10 — wishbone suspension
Rear suspension AUDI A4:
1 — lower control arm; 2 — cross; 3 — spring suspension with variable diameter; 4 — absorber; 5 — brakes; 6 — brake disk; 7 — upper suspension arm
AUDI A4 can be equipped with and inline four-cylinder engine working volume of 2000 cm3 and a power of 130 HP at 5700 rpm. But with this motor it accelerates to 100 km/h in 9,9 s, the maximum speed of 212 km/h. fuel Consumption in motor is much smaller — a mere 7.9 l/100 km.
New AUDI developed a diesel — economical V-shaped six-cylinder powerplant is a 2.5 DI with 180 HP
The machine is equipped with a mechanical five-speed gearbox or an automatic transmission type MULTITRONIC. Most high-speed and dynamic parameters in “fours”, equipped with the MULTITRONIC transmission, is significantly higher than the same cars with a manual transmission.
The design of the AUDI A4 delivers virtually maximum protection for driver and passengers. A new body is a steel supporting structure with the components of aluminum alloys. Compared to the previous model body strength increased by 45% — this has increased not only machine control, but also improved acoustic comfort. In addition, the increase in body stiffness to a great extent contributed to improving ride quality at high speeds. The minimum deformation of the passenger compartment in a collision is provided with ten protective sheets of variable thickness.
The designers of the AUDI A4 managed to find a reasonable compromise in the constant debate between comfort and handling. The machine is characterized by high sensitivity to the turning steering, and the wheel creates a tangible force when it exits from the neutral position. The car goes perfectly straight, kept steadily with gentle turns and sharp curves.
The machine is equipped with electronic stability control ESP and auxiliary braking system BRAKE ASSIST that allows the driver to maintain vehicle control even in the most difficult situations.
AUDI A4 — new integrated security system for the driver and passengers. So, side airbags SIDEGUARD provide protection of the head and neck of each of the passages of the ditch (these six pillows: front, side and window curtain for passengers front and rear seats). By the way, when you turn the ignition on the dashboard lights up the red lamp circuit of the airbag. 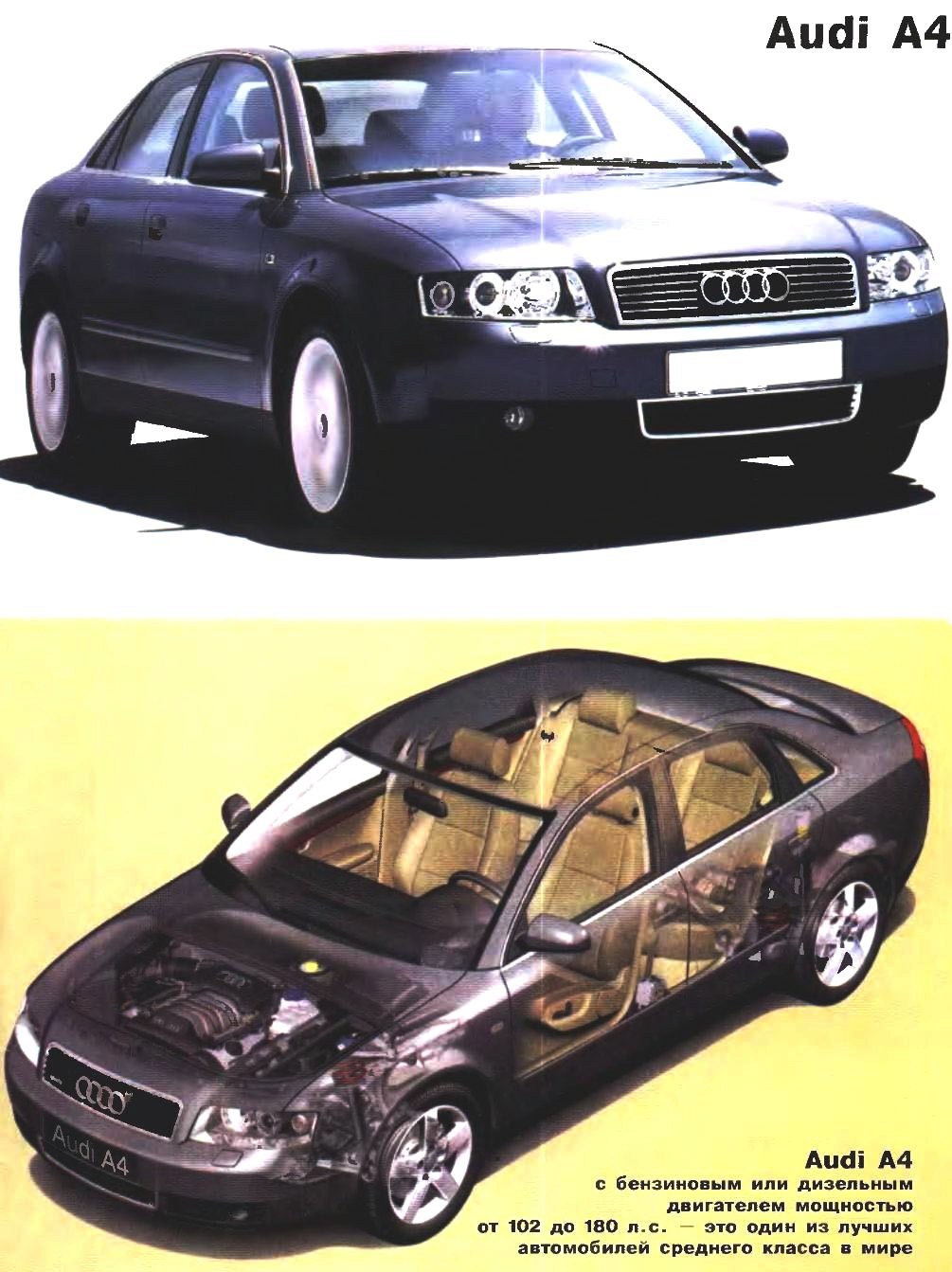