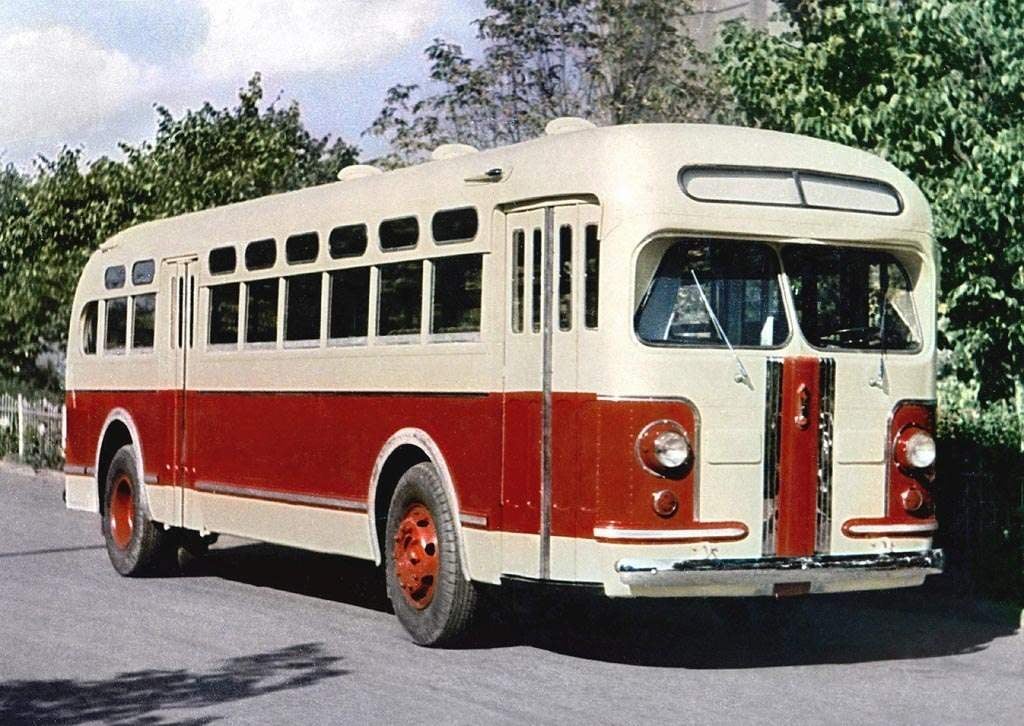 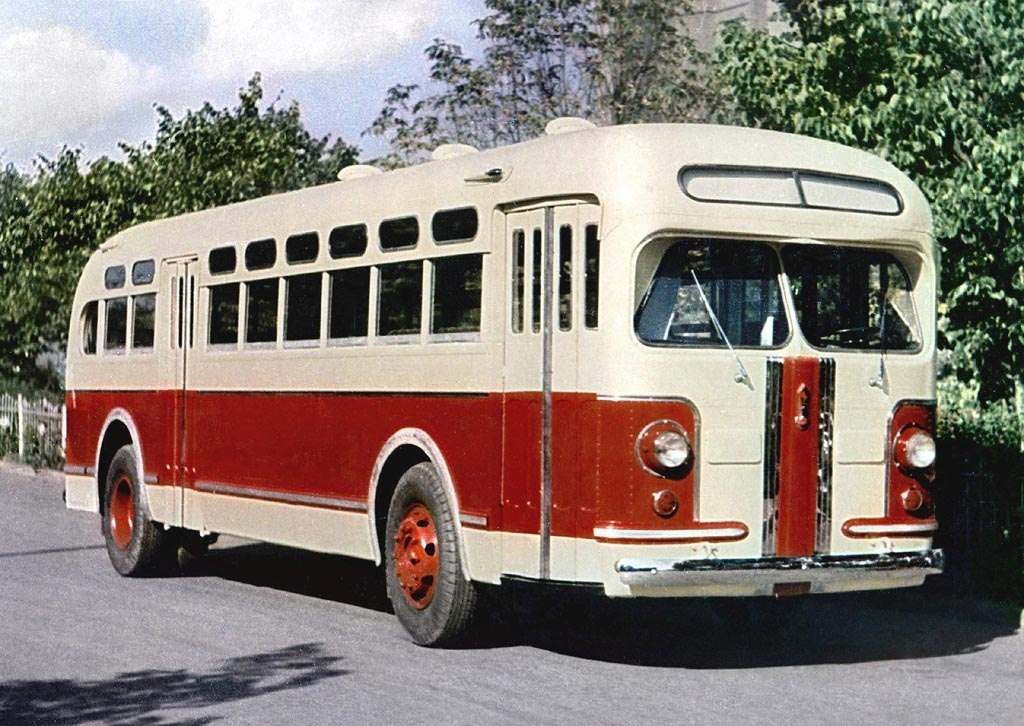 City bus ZIS-155 production in 1949. The development and expansion of cities accompanied by the concentration of citizens in residential areas and, consequently, the factories in the industrial, has created the problem of passenger traffic, which could not solve a horse-drawn vehicle for personal use. And in the second half of the XIX century in cities there are predecessors of buses and trams, horse and steam-powered.

The advent of the trams has promised a radical solution to urban transport problems — the rocks were covered with a dense network of tram ways and the grinding wheel pairs and discordance tram calls have become customary for many cities in the world.
Soon, however, it turned out that the most democratic type of transport requires a considerable investment because in addition to the rolling stock it requires extensive rail network and a considerable number of power substations. However, the tram successfully expand its presence in the cities as long as he is not a serious competitor, for the successful operation which required a more or less tolerable road. It was a bus — passenger vehicle for collective use.
The first bus lines has appeared in our country, exactly 80 years ago— in August 1924. By the beginning of 1929, the fleet of buses consisted of 1368 cars of foreign production (most of the cars were purchased from the companies Ford, FIAT and “Leyland”), and intercity bus service was organized in 84 cities of the USSR. Interestingly, in the same period, the trams were only in 41 cities of the USSR.
Since the mid 1930-ies, in the rapid development of industry in our country, and accompanied this process of urban growth, the problem of organization in the industrial centers full of passenger transport became more acute, she could solve the limited foreign purchases of buses.
The first mass domestic buses of that period became the ZIS-8, I-6 and ZIS-16 created on modified chassis of serial trucks. Buses on the basis of trucks with stiff suspension is equipped, as a rule, wooden body, was cramped and had insufficient capacity. Because of the classic bonnet layout the ratio of the useful and the full area of such bus does not exceed 75 percent. A mechanical drivetrain and brakes with a mechanical drive was required from the driver thousands of tedious operations, clutch, gear shifting and braking a multi-ton vehicle.
To create a full city bus was a necessary transition to a more progressive wagon layout that would bring the degree of utilization of the usable area of up to 90 percent. The first prototypes of such a machine was built in 1937-1938 at the research Institute of urban transport (based on the bus ZIS-8), and in Scientifically-research tractor Institute. The last named NATI, was an all-metal monocoque with a capacity of 60 people, 6-cylinder 155-HP engine, located transversely in the rear of the machine, and pneumatic brakes. Experienced bus railroad layout was created also at the plants of GAS (GAZ-71) and ZIS (ZIS-17). 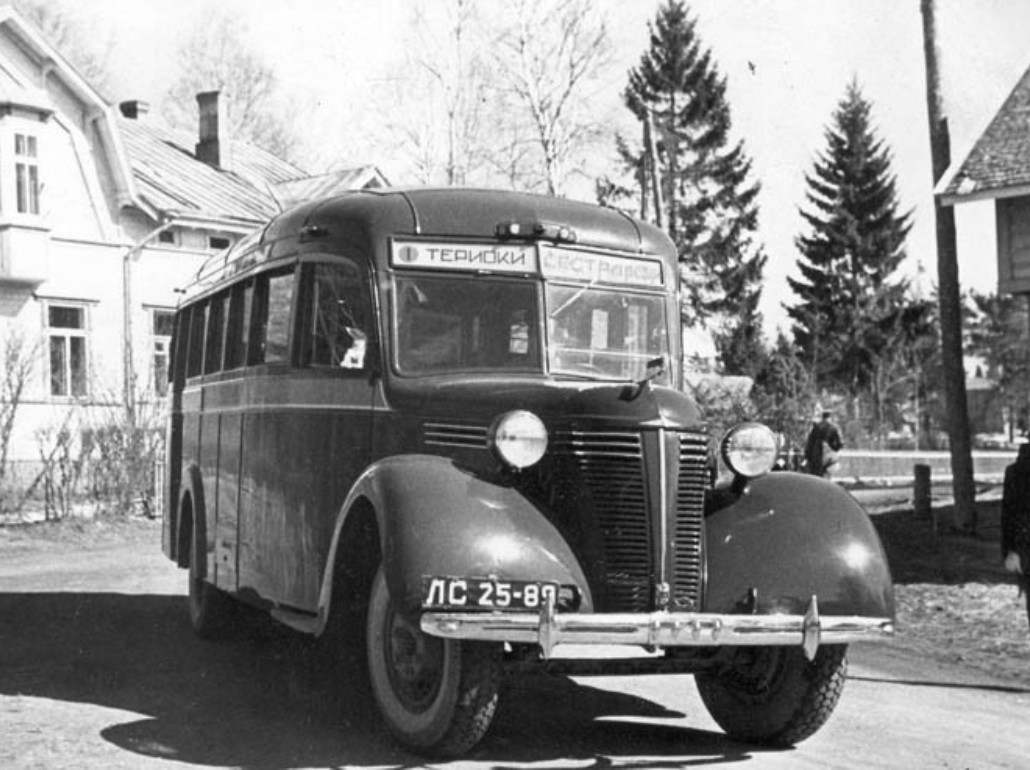 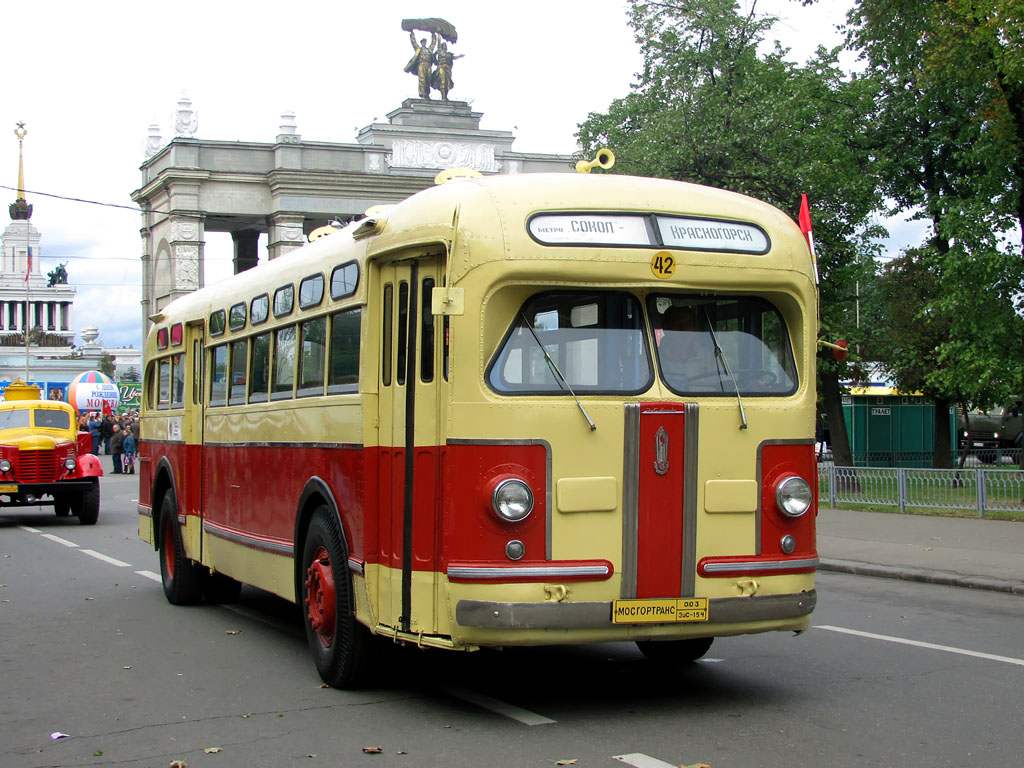 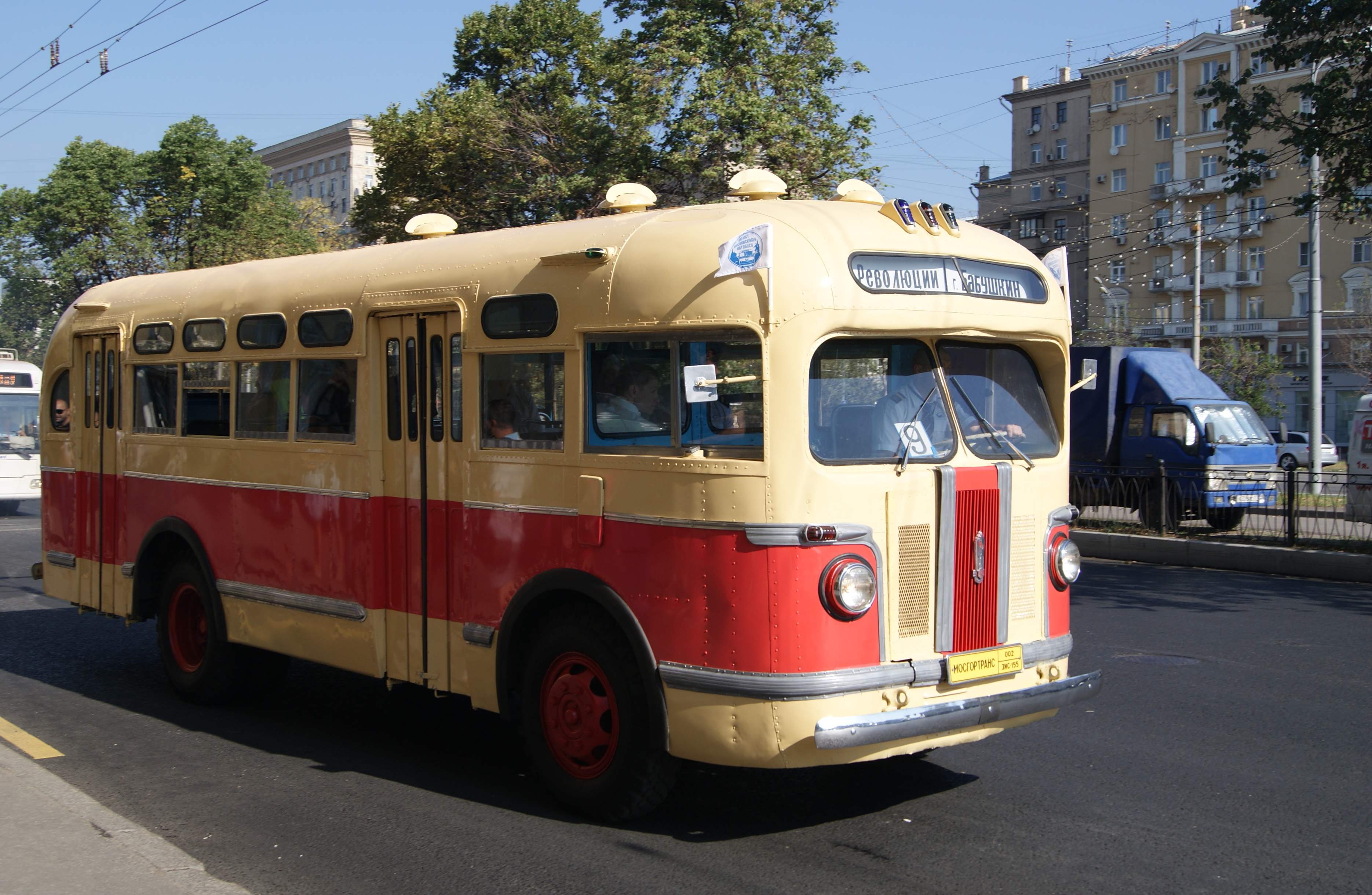 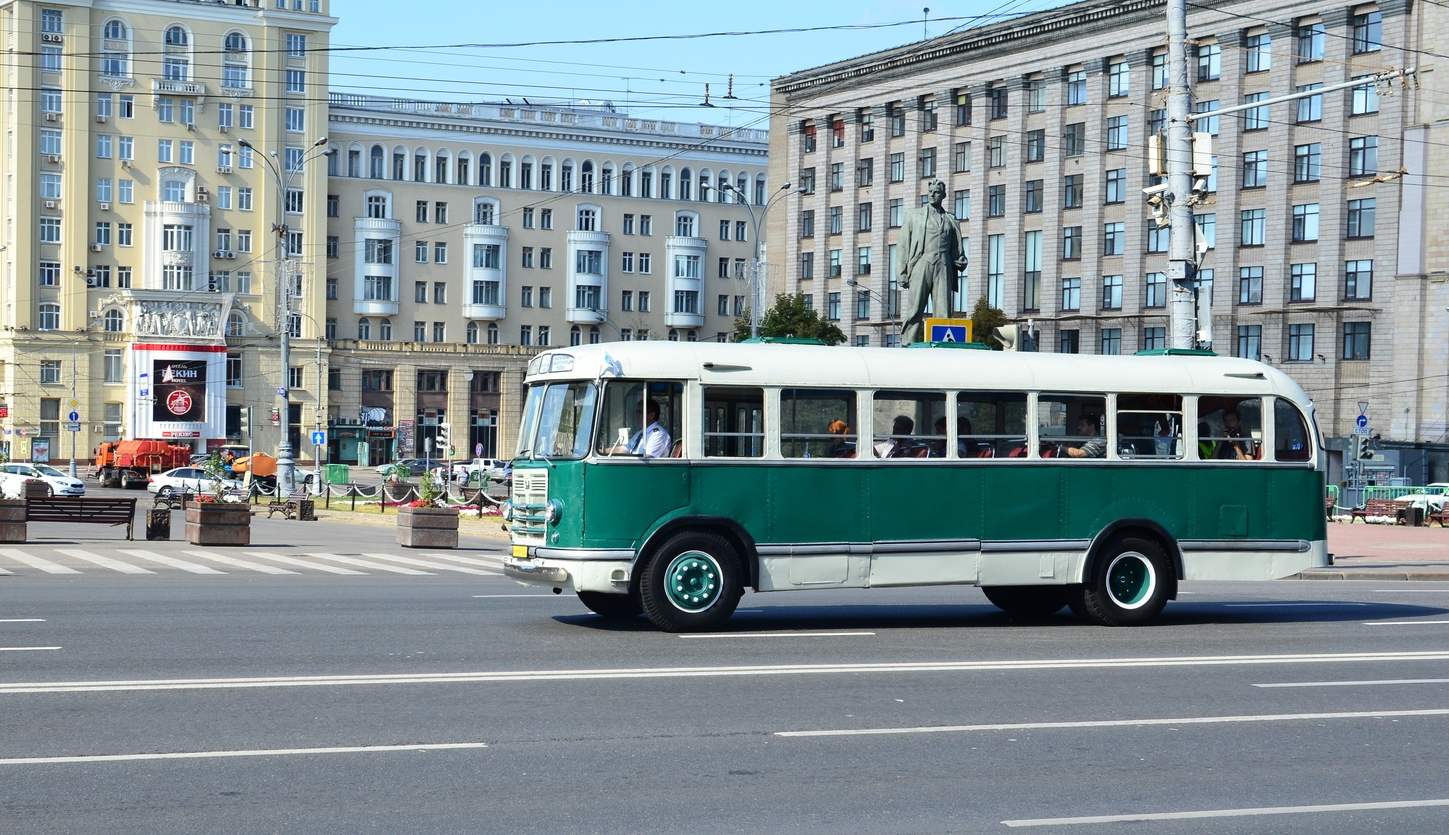 ZIL-158 1957 — a massive bus of average capacity 1960-ies
In the postwar period the need of cities in a completely new city bus of average capacity with all-metal monocoque body type wagon and the diesel engine is even greater. The management of the ZIS plant was proposed to create a bus, equipping it with an electric continuously variable transmission (as in the American bus MACK) or hydraulic transmission (as in the bus company GMC).
The design of the new machine, called the ZIS-154 began in the spring of 1946, in KB, of buses under the leadership of engineer A. I. Israel-Sergieva. At the end of the same year was assembled the first bus with aluminum body, equipped with two-stroke 4-cylinder, 112-horsepower diesel engine yaz-204D and a continuously variable automatic transmission, which had 62 seats and could carry up to 75 passengers with a maximum speed of 75 km/h.
The new bus was very favorably accepted by the citizens — passengers quickly appreciated the smooth ride, soft and comfortably positioned seats, wide doors and passage in the cabin, as well as effective ventilation and heating of the body. Appreciate the ZIS-154 and drivers for ease of operation and comfort in the workplace.
Unfortunately, on the background of the good performance of the bus all the more clearly manifested its shortcomings related to the poor performance of the diesel engine yaz-204D. Endless breakdowns, big noise and smoke of motor evoked growing concern of the city authorities and factory management. It also revealed the inconsistency in the characteristics of the engine and its associated generator, which caused failures in the operation of electric transmission when starting off. Unfortunately, progressive layout solutions, inherent in the design of bus-powered, was compromised as the design errors, and poor performance of a number of key nodes. The automotive industry in the beginning of 1950 years, apparently has not yet reached the technological level necessary for mass production quite difficult to manufacture bus-powered, clearly ahead of his time.
As a result, in 1950 ZIS-154 had to be removed from production and changeover to a unified with him on most elements of the body, but much more simple 28-seater city bus ZIS-155 with a conventional mechanical transmission, designed to simplify and reduce the cost of production in the main units of the chassis of the truck ZIS-150.
The power unit of the new bus was a 6-cylinder gasoline engine ZIS-124, differs little from the motor of a truck ZIS-150. As a result of improvements, the engine power was increased to 95 liters. p. at the engine speed of 2800 rpm. the Clutch friction disc, dry. Gear box mechanical, five-step, three-way. 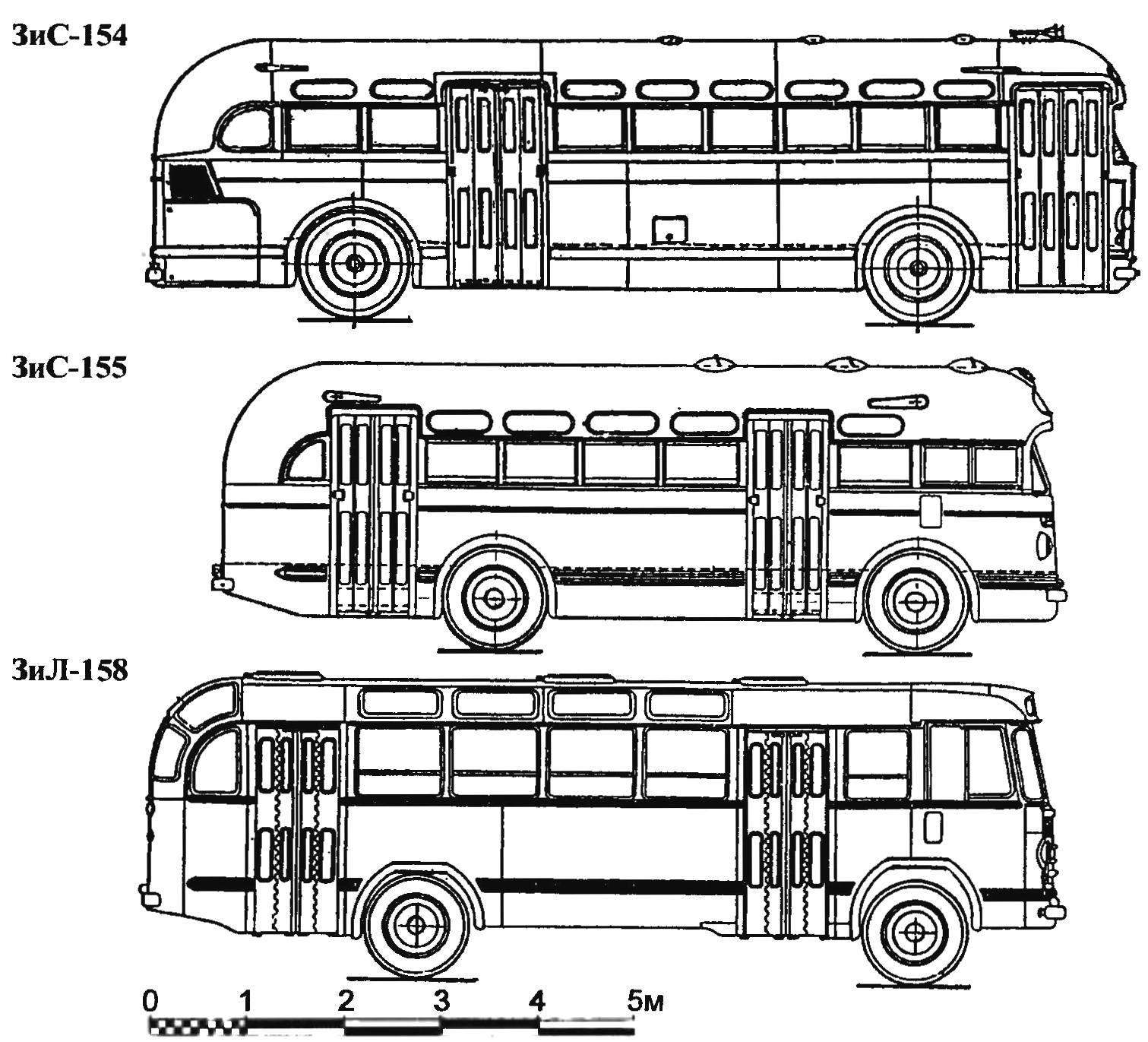 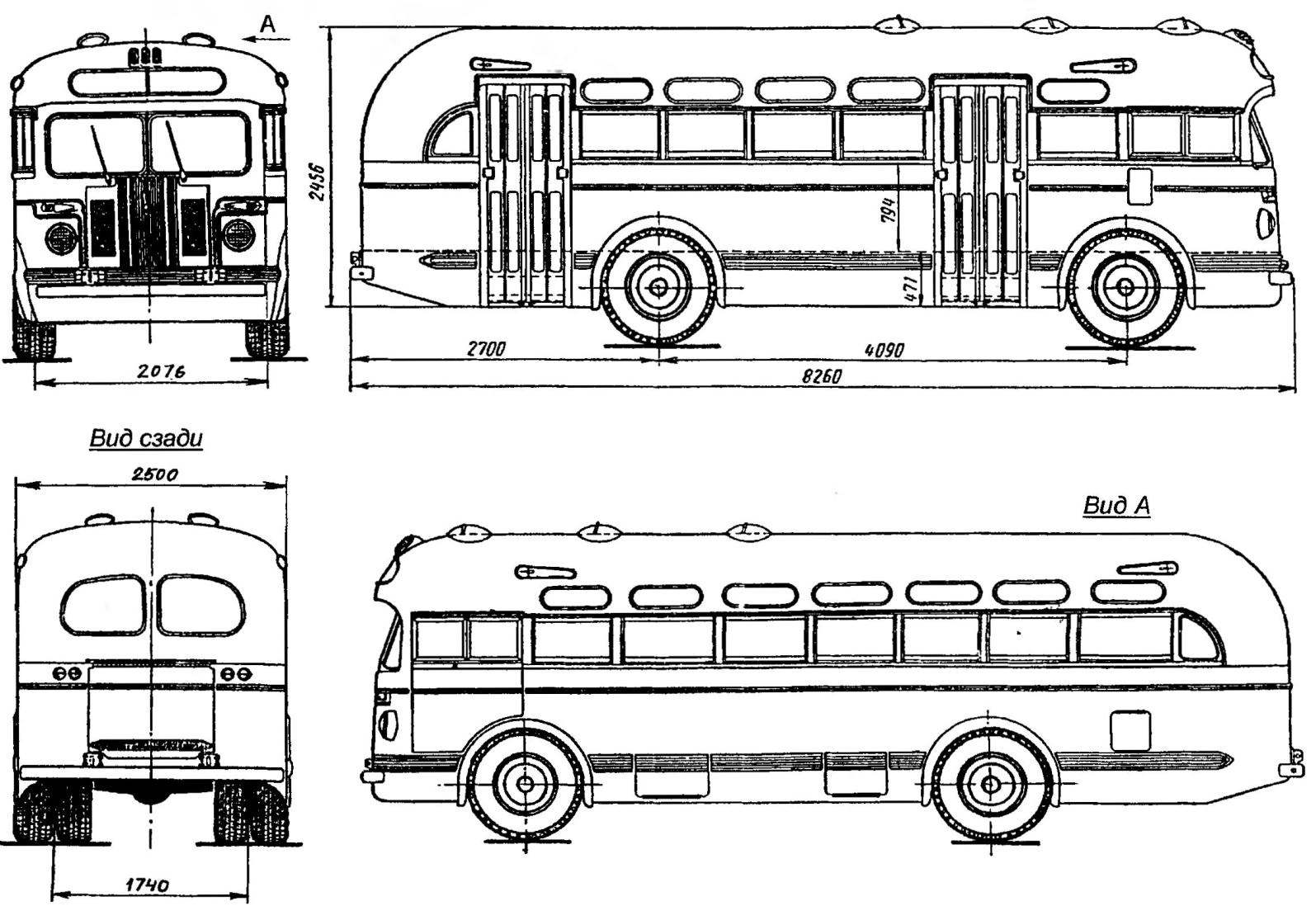 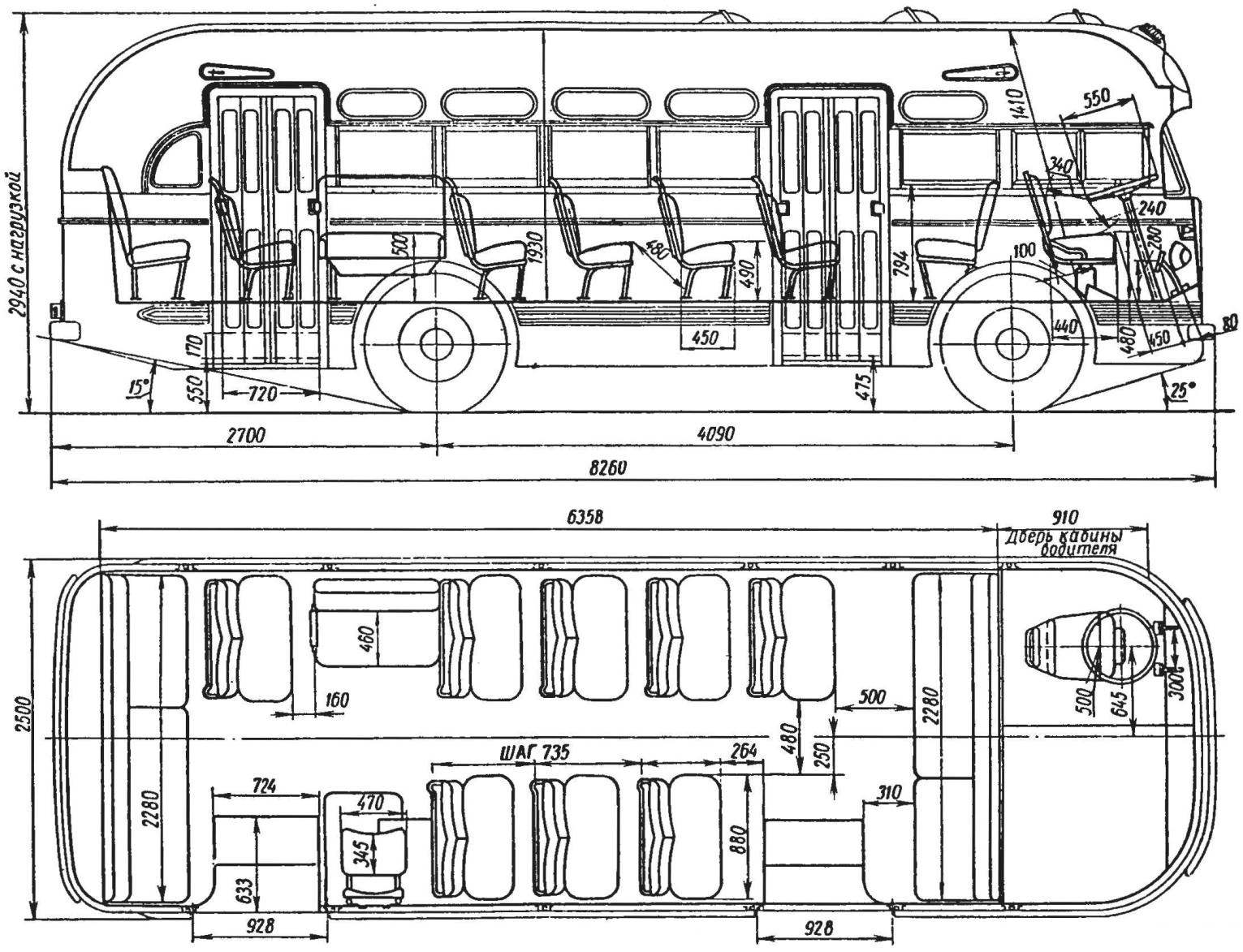 The layout of the bus ZIS-155
Exterior view of the bus ZIS-155:
1 — door cab; 2,21 —tow hooks; 3,20 — bumpers; 4 — wing access to the engine; 5 — ventilation grilles of the cooling system of the engine; 6 — headlights; 7 — pin; 8 — wiper; 9 — windscreen; 10 — window display of the route; 11 — signal of the route; 12 — vent; 13 — mirror; 14 — rear position lamp; 15 — upper window; 16 — lateral lifting window; 17 — rear-marker lamp; 18 — rear side window; 19 — fold door; 21 — towbar; 22 — fold compartment spare wheel; 23 — the stop lamp; 24 — a pin; 25 — rear window; 26 — the door seal; 27 — a casement window door
Increased electricity consumption for lighting of bus required installation of a larger generator (in comparison with the generator of ZIS-150) power — 1000 watts and the battery increased capacity.
Driveline consisted of two open tubular shaft with intermediate support on two ball bearings.
Leading rear axle had cast ductile iron beam with pressed into her heat-treated steel pipes. Main gear — double with conical and cylindrical pairs with a helical tooth. Differential conic with four satellites.
Front axle guide with forged steel I-beam cross section. The knuckle relied on tapered roller bearing.
Front and rear suspension of the bus is made of four leaf semi-elliptic leaf springs with hydraulic shock absorbers double acting on front and rear axles. Spring was hanged to progressorism venues beams front and rear axles at the bottom and were fastened with steel ladders.
The steering mechanism was a cone worm with a triple roller; steel worm rotates on two tapered roller bearings, steel three-row roller on needle bearing. Steering wheel — three-spoke, diameter 550 mm.
The wheels on the bus disk, steel, with removable side and locking rings. The hubs of the wheels are attached by eight studs with thread M20x1,5 mm nuts with spherical bearing surface. And the thread on the studs right wheels were right and heel of left wheels left. The front wheels lean-to, rear — saddle, all the wheels were interchangeable. The pressure in all four tires was 5 atmospheres. 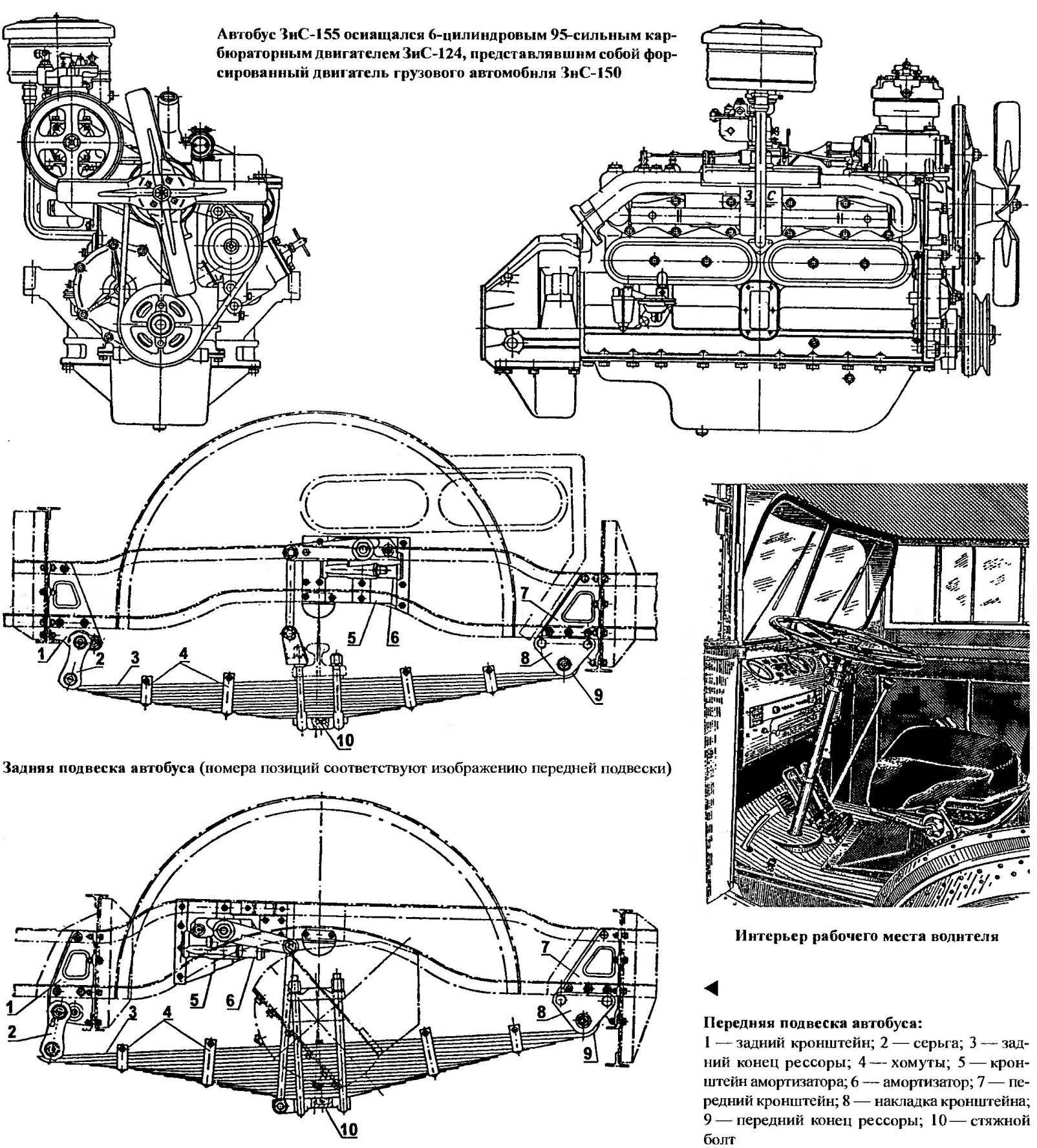 Brake drum, drum brakes with pneumatic drive. The brake drum diameter — 420 mm Air compressor piston type, double-cylinder, driven from the pulley of the fan.
Hand brake disc, dvukhchastotnyi, is mounted on the rear flange of the shaft intermediate support. The hand brake lever with toothed sector mounted right of the driver.
The electrical equipment is single-type, and the mass was not connected negative as on most modern cars, and the positive terminal of the battery voltage of 12 V and a capacity of 200 And h generator capacity of 1000 watt — V-belt from crankshaft pulley.
The bus had 28 seats in the regular capacity of 50 passengers. Body bus-all-metal, bearing, carriage type.
Frame base riveted from shaped extruded aluminum profiles and frames body steel. External cladding combined: stamped front, back and upper lateral part of the steel sheet, and plating the middle part is of sheet duralumin. Front and rear interior lining of a body stamped from sheet steel, the middle part from steel sheet and special carton. The floor of the body of 10-mm plywood covered with a rubber carpet.
Ventilation of the body was carried out using six vents serving to exhaust air from the cabin while driving the bus. To enhance the ventilation of the cabin in the summer time designed the hatch in the front wall of the body opening to which the discharge of air due to the incoming flow.
A four-door, the door unlike door trolleybuses that time opened outward, which did not help their longevity, as the passengers, eager to penetrate the crowded salon, used the flap as a handhold and eventually break out of it. Opening and closing of the doors was carried out by pneumatic piston type device, located above the doors under the interior lining.
Technical characteristics of buses of the 1950s years 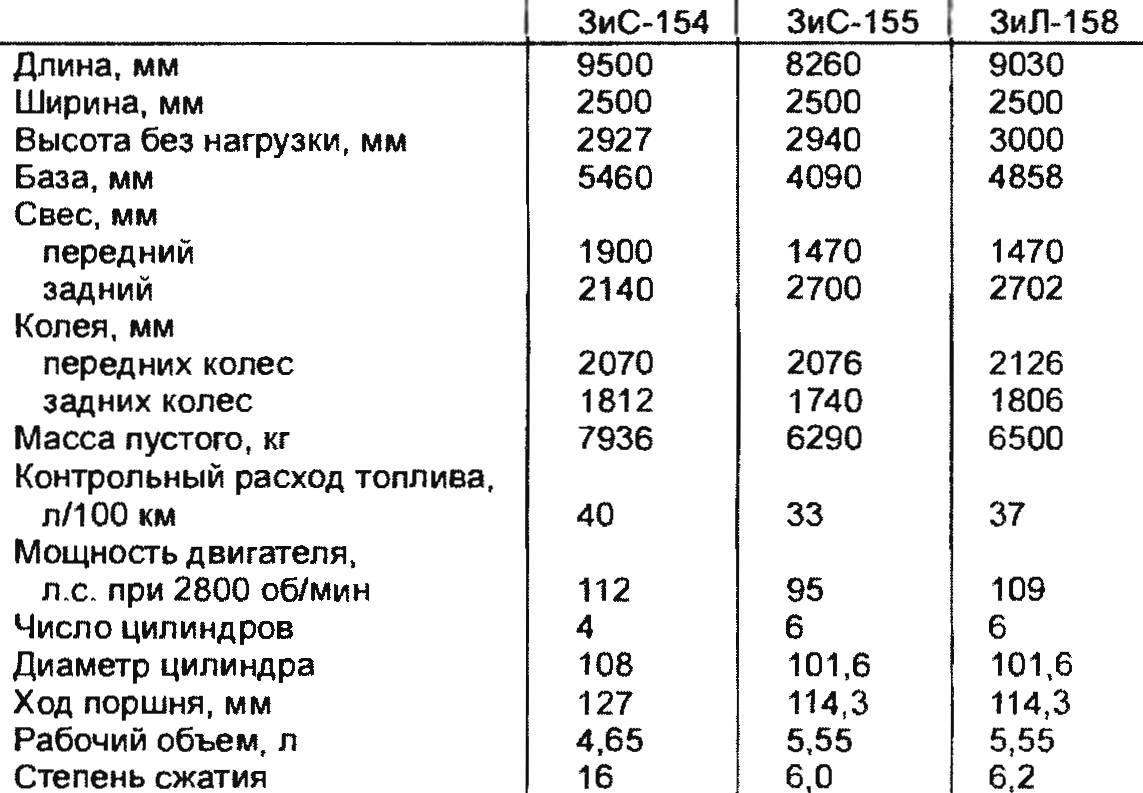 The maximum speed of the bus with a load of 50 passengers was 65 km/h, cruising range on fuel with the same load of 350 km, fuel consumption was achieved (in the summer) 33 l/100 km.
ZiS-155 was produced from 1949 to 1957 and became the most popular city bus at the time. However, in the mid 50-ies of the last century it became clear that the lack of capacity of these machines allows them to cope with the increasing passenger traffic. In addition, the design of the bus, created on the basis of the truck left much to be desired. In August 1957 to replace the ZIS-155 began to produce a larger 32-seat bus middle class ZIL-158 (total capacity is 60 passengers). However, the new machine design is a little different from the ZIS-155, many units of these buses were interchangeable, and new ones could be to consider only the shape and dimensions of the body.
I. EVSTRATOV