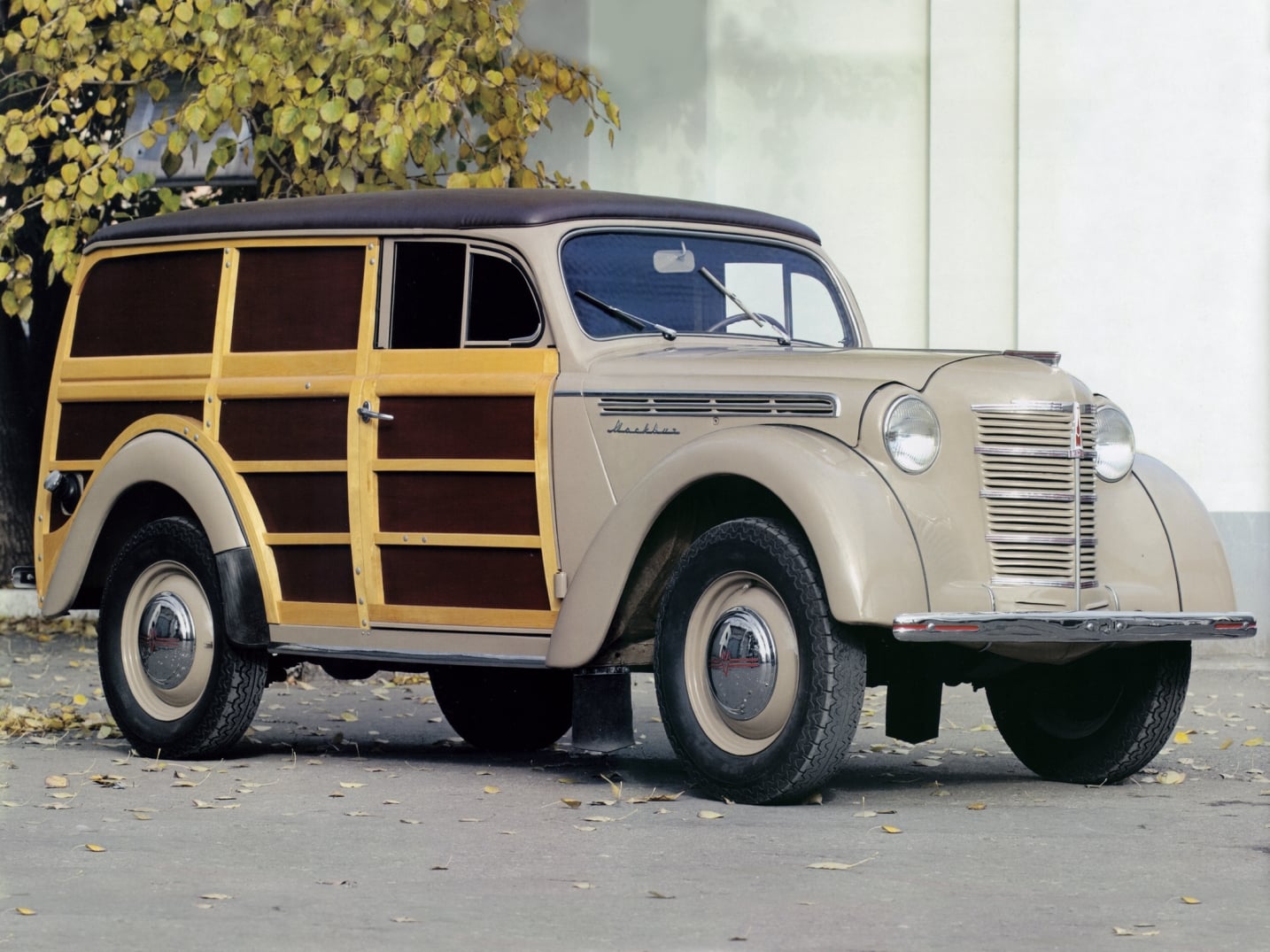 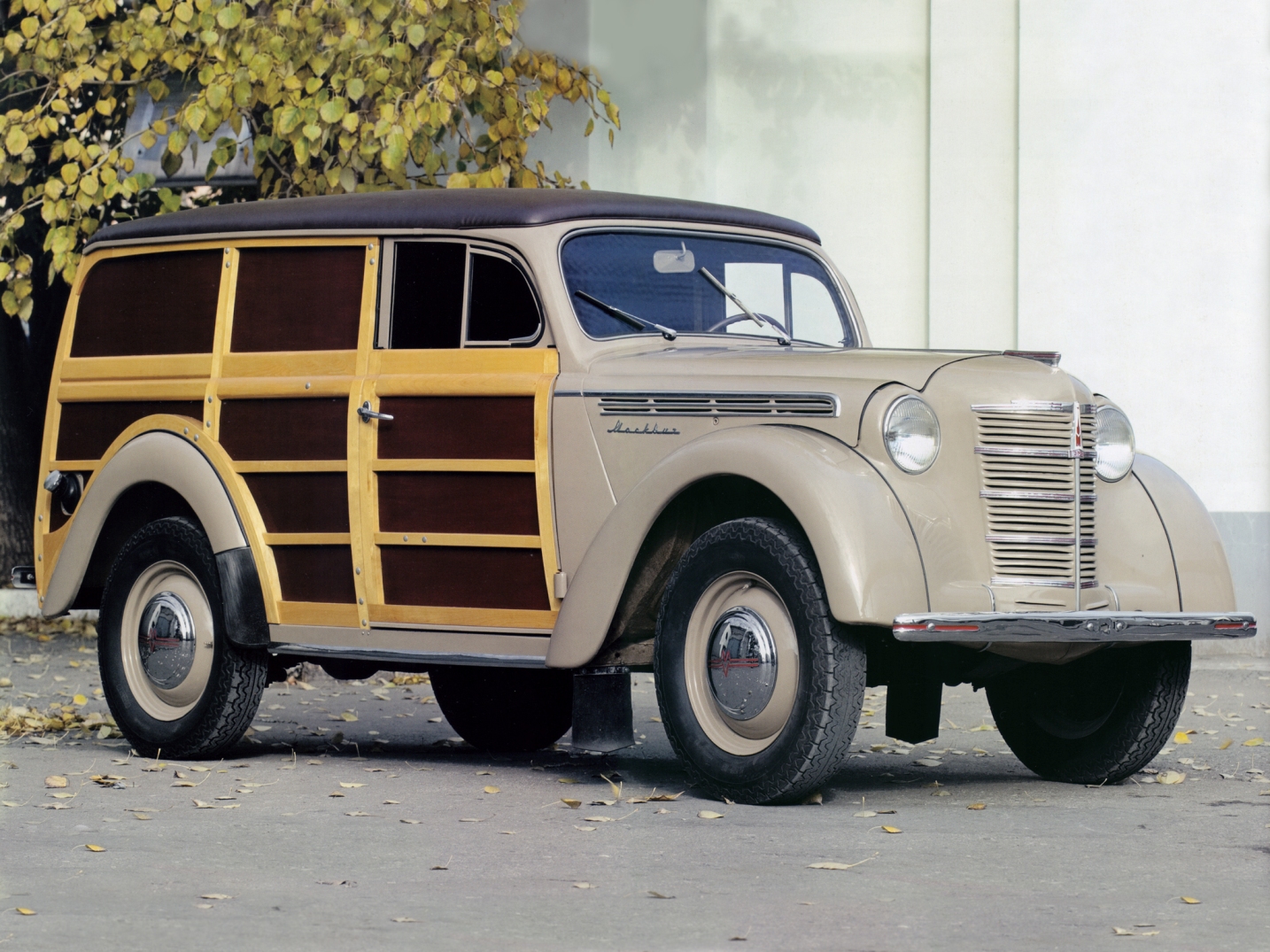 After the Second world war in accordance with the decisions of the Crimean and Potsdam conferences of 1945, the victim of crushing defeat of Nazi Germany in the victorious countries flowed Golden streams of reparations. They were precious metals and valuable industrial raw materials, patents and promising development, foreign assets and plant equipment. One of these streams, which originate in the realm of the German company Opel, passing through the half of Europe, joined to the territory of the Moscow plant of small cars (former car Assembly plant of a name of the Communist youth international), to lay the Foundation of mass production of the first Soviet car “Moskvich-400”.
In the prewar years the plant was prepared for serial production two-door compact car KIM-10. This car had the engine and chassis copied from the English Ford Prefect, and the body on the model of American car Buick Roadmaster. A lot of this machine was for the Soviet automobile industry is atypical: in addition to the two-door body, V-shaped windshield, polonesse body, semaphore turn indicators and, finally, the hood of the alligator type. The machine was equipped with a four-cylinder 30-horsepower engine cylinder capacity of 1,172 l with three-speed gearbox, drum brakes with a mechanical drive and suspension by transverse leaf springs. Maximum speed four-seater small car was 90 km/h.
Among other novelties is a compact two-door passenger car was demonstrated in the Kremlin leaders of the party and government of our state. However, the enthusiasm for Stalin, it did not cause. They say that the Secretary General, taking the front passenger seat, was invited on the rear of the plant Manager. The one that speechless from the impracticability of invitations, distractedly circling around the car to enter the passenger compartment can be had only by asking Stalin to go the Best friend of the car, after a pause, he recommended the “cut through” in the car, already prepared for the series, another pair of doors.
Car KIM-10, however, launched in two-door compact version (had to use body panels made-to-order plant with an American company Budd), but in parallel started to cook up a four-door version. Just before the war, was released about 500 copies KIM-10. About a hundred cars in a military version (with simplified body) was made during the war. 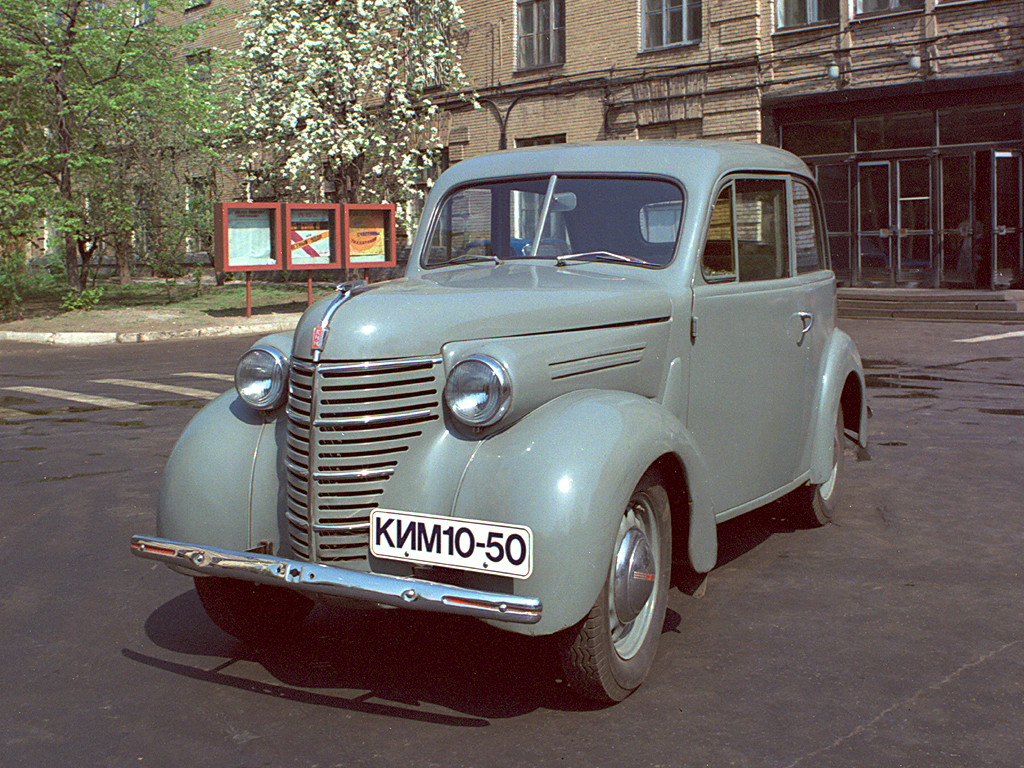 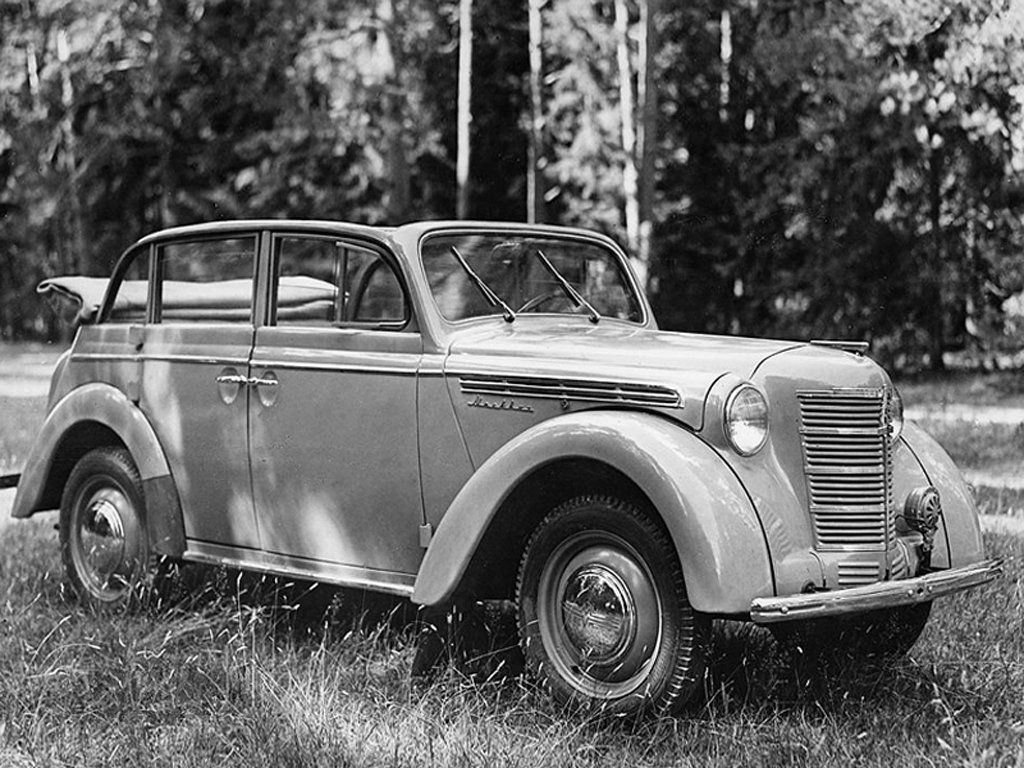 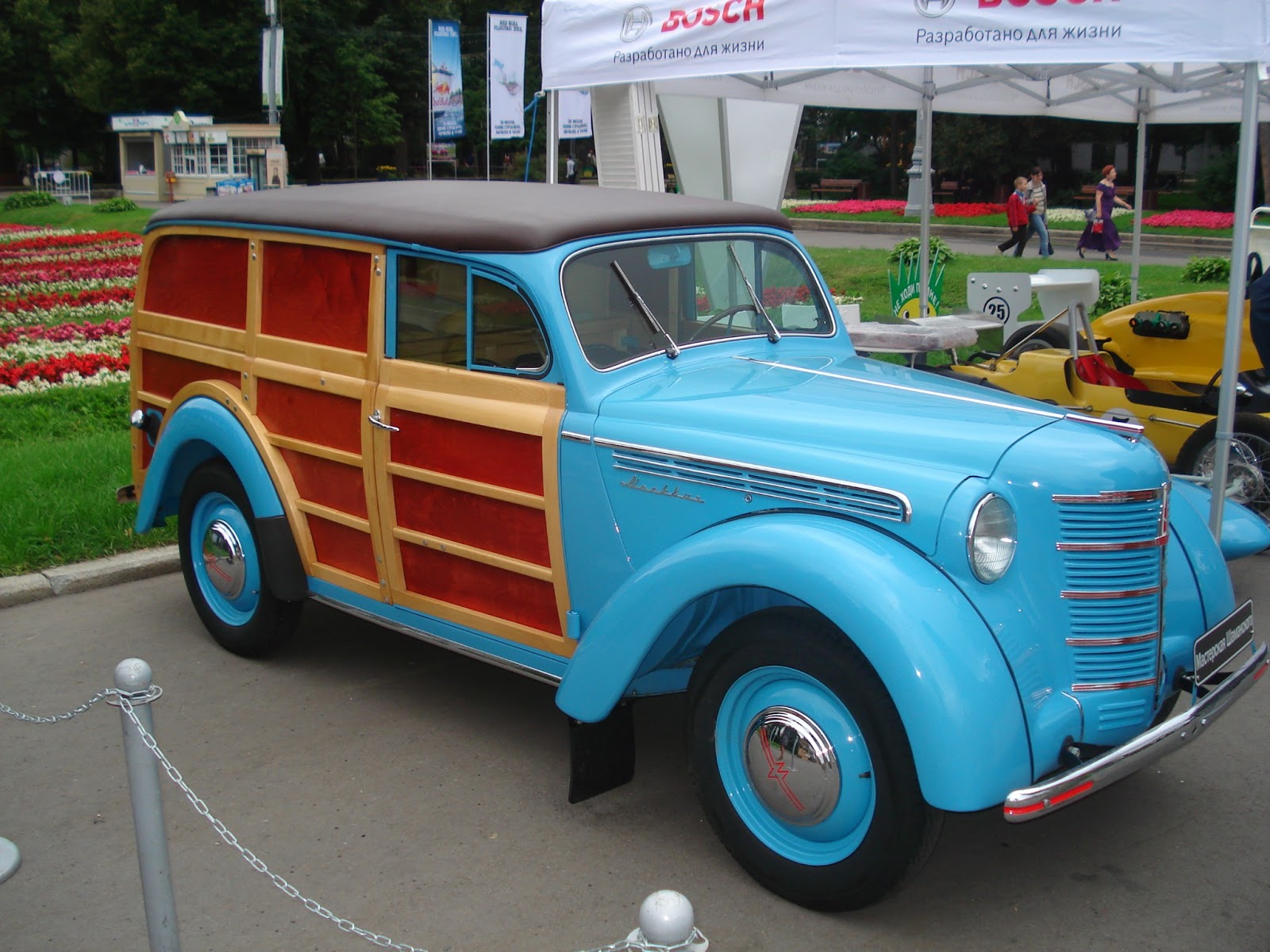 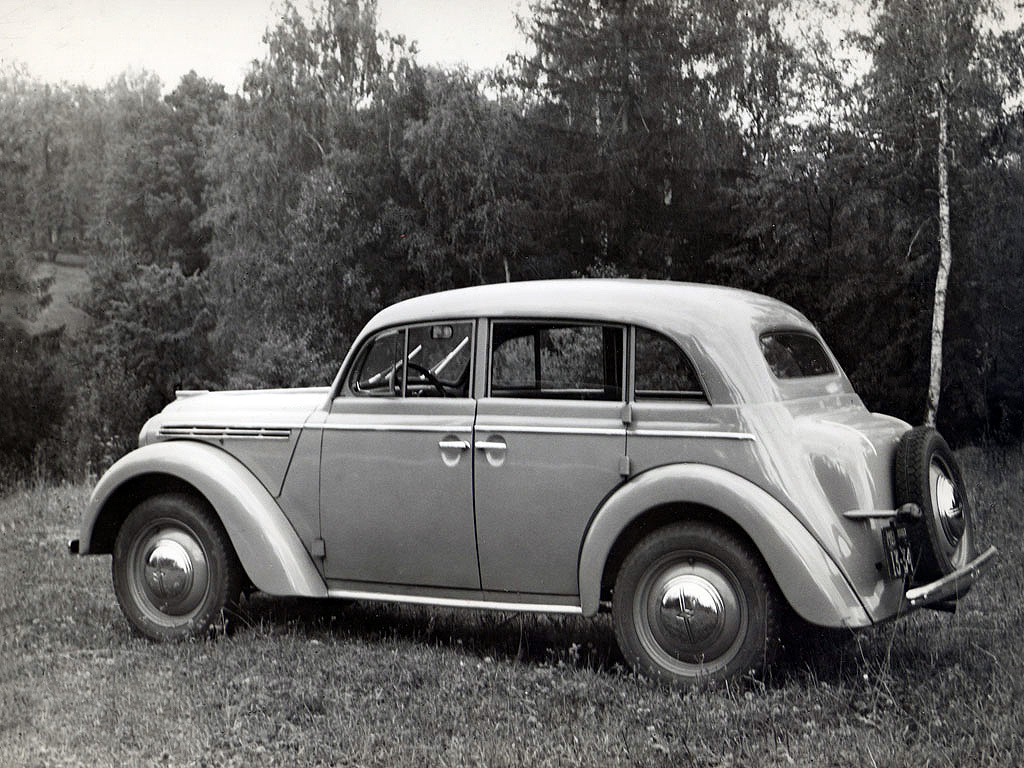 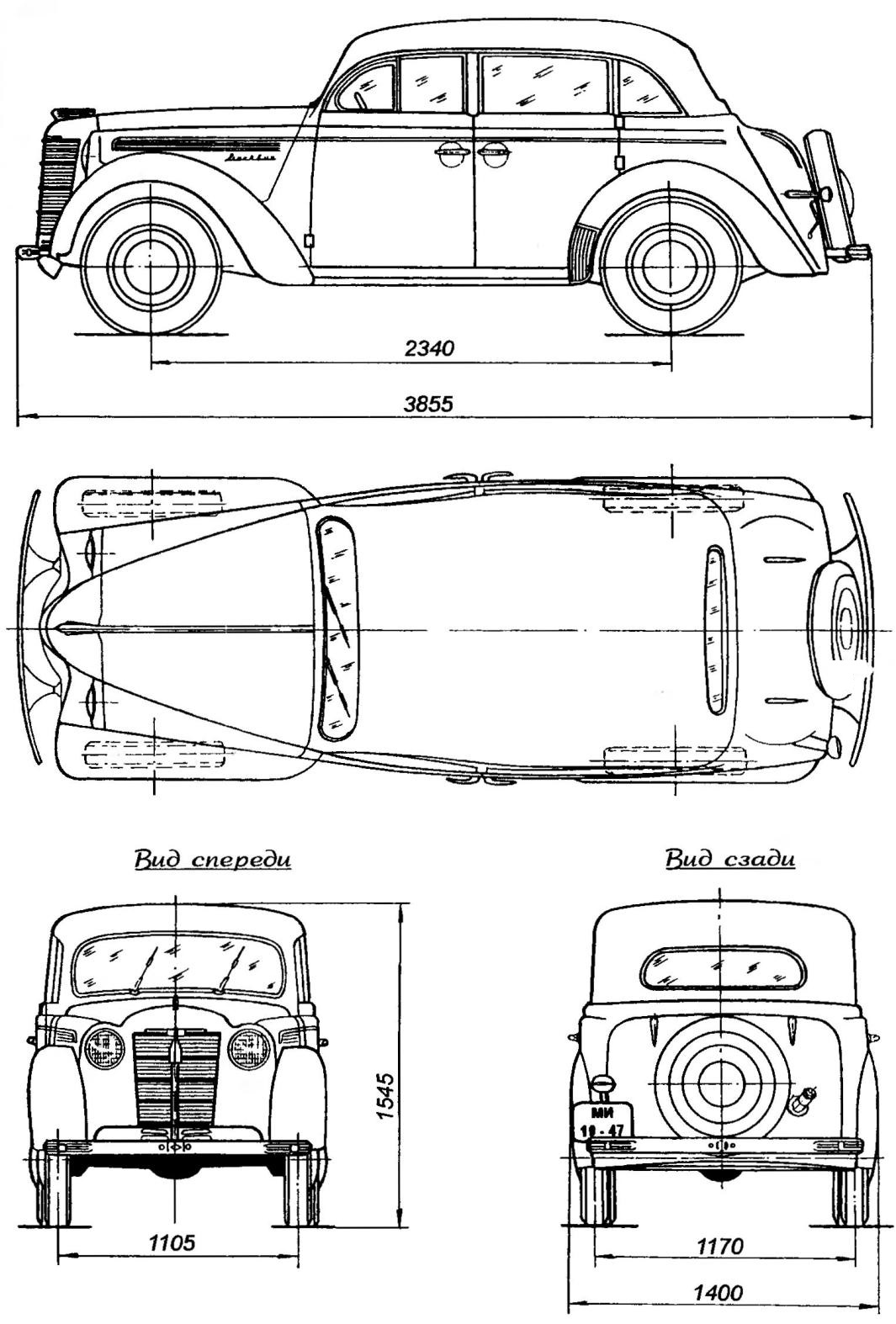 “Moskvich-400” with a body “sedan”
In the mid 30-ies on the creation of public compacts worked and the German firm Opel. In 1934 there was established an inexpensive mass-Olimpia with a 1.3-liter engine, and then the Kadett. It was highly advanced at that time, the car with bearing all-metal body, drum brakes with hydraulic drive and independent suspension of front wheels of the type Du-bonnet and the rear axle on longitudinal leaf springs.
Opel Kadett enjoyed enormous popularity not only in Germany but also in many other countries, and this, apparently, was the reason that after the end of world war II equipment, intended for the production of this car was recognized as reparations and taken to Moscow, to the Assembly plant named KIM, renamed because of the mass production economy car Opel Kadett in the Moscow plant of small cars (MZMA).
Mastering the reparation of equipment and its launch was carried out in the shortest possible time — the first minicar, called the “Moskvich-400”, was released on 4 December 1946. Machine weight 885 kg, equipped with nineleven 1,074-liter engine capacity of 23 HP and three-stage gearbox with synchronizers on second and third gears could run on cheap petrol with an octane rating of 66 and to reach the speed of 90 km/h. the price of the machine was determined in 9000 rubles, and it was, in principle, available for families with multiple working members, the salary of a skilled worker or the average engineer was at that period about 1000 rubles.
It should be noted that the “Moskvich-400” was the first mass car in the history of the Soviet state, specially designed for the sale of it in private (personal, as he said at the time) property. It was “the Muscovite” has allowed tens of thousands of Soviet families to meet two fundamental rights, declared by the majority of democratic constitutions — the right to private property and the right to freedom of movement.
However, back to the history of this remarkable car, or rather cars, as in addition to the sedan MZMA mastered production of a convertible, pickup and wagon-station wagon with wooden body. The last was produced in accordance with the development of Opel, created in the prewar years, the Opel Kadett of the universal body of type “station wagon”. Kadett is perfectly suited for this purpose — the strength of his body even without steel sidewalls and roof were quite sufficient to create the freight trucks light-duty. The point is that the bottom of the car had increased stiffness due to the powerful propeller shaft tunnel and massive Warnig cross members. 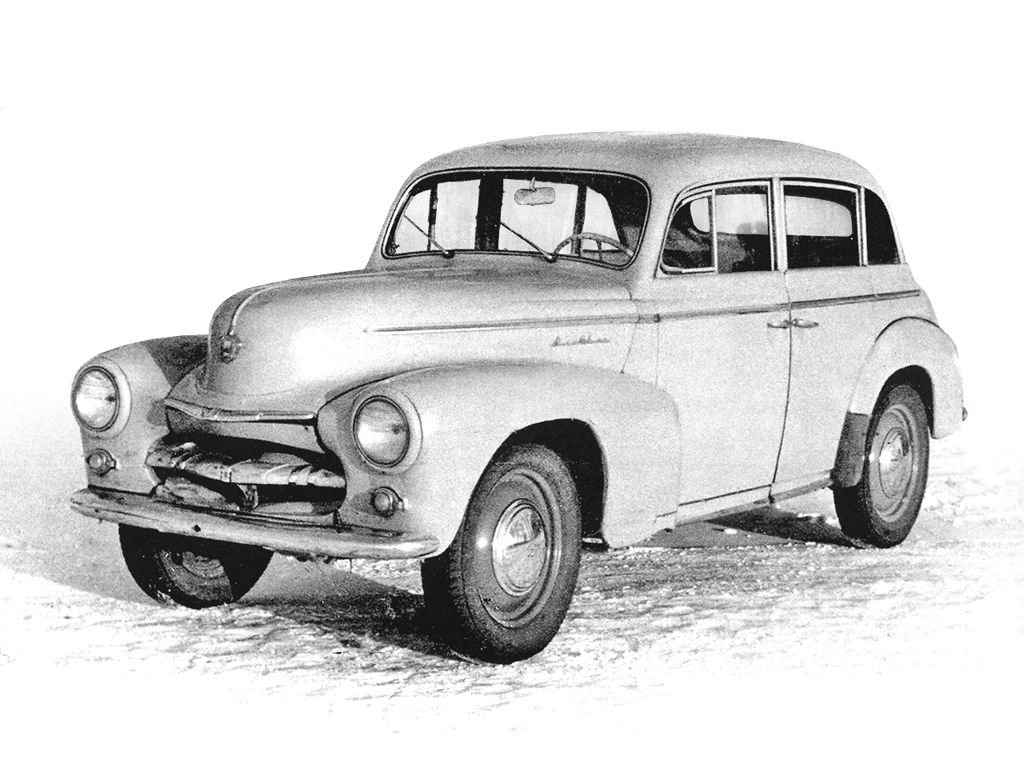 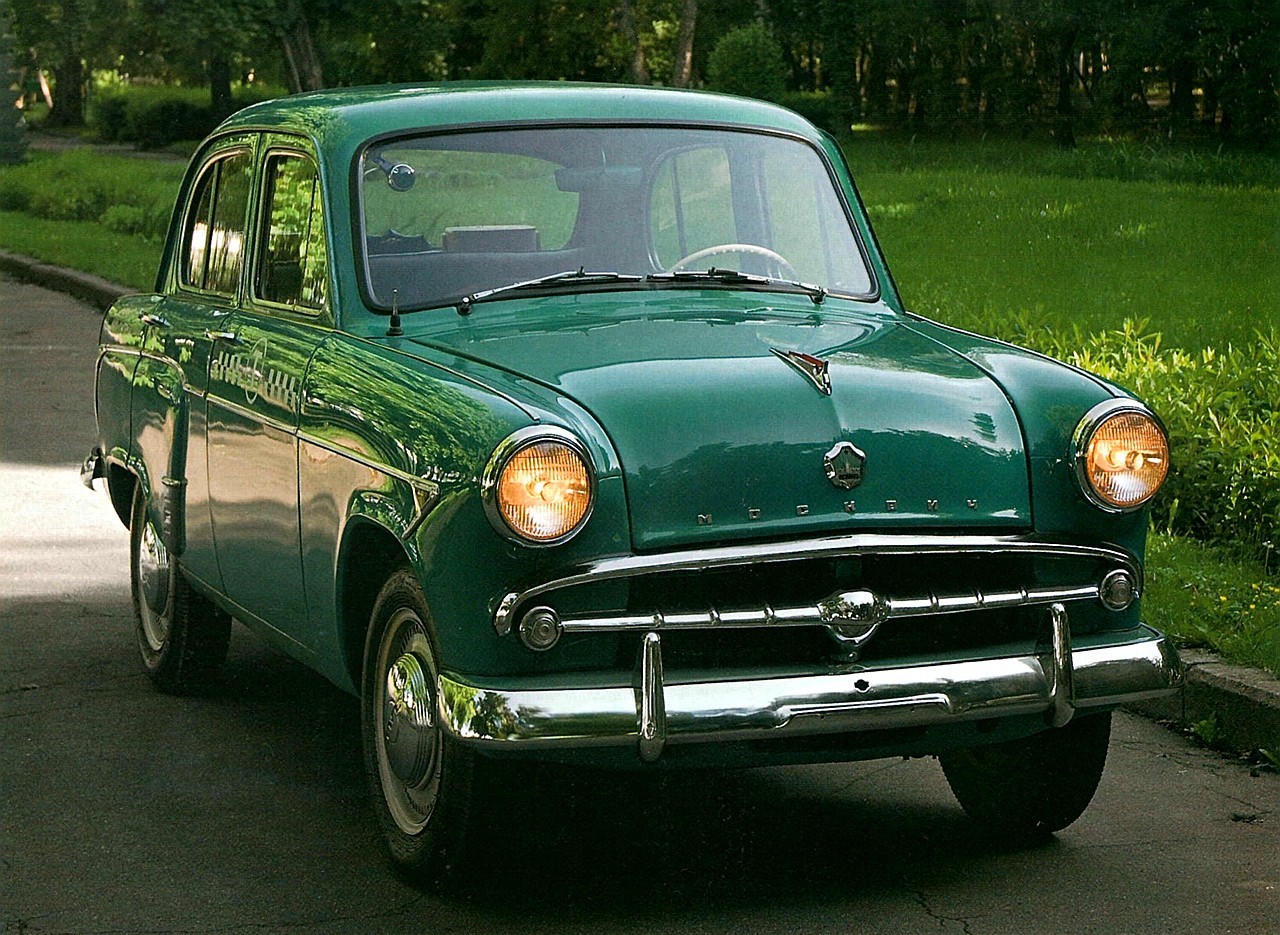 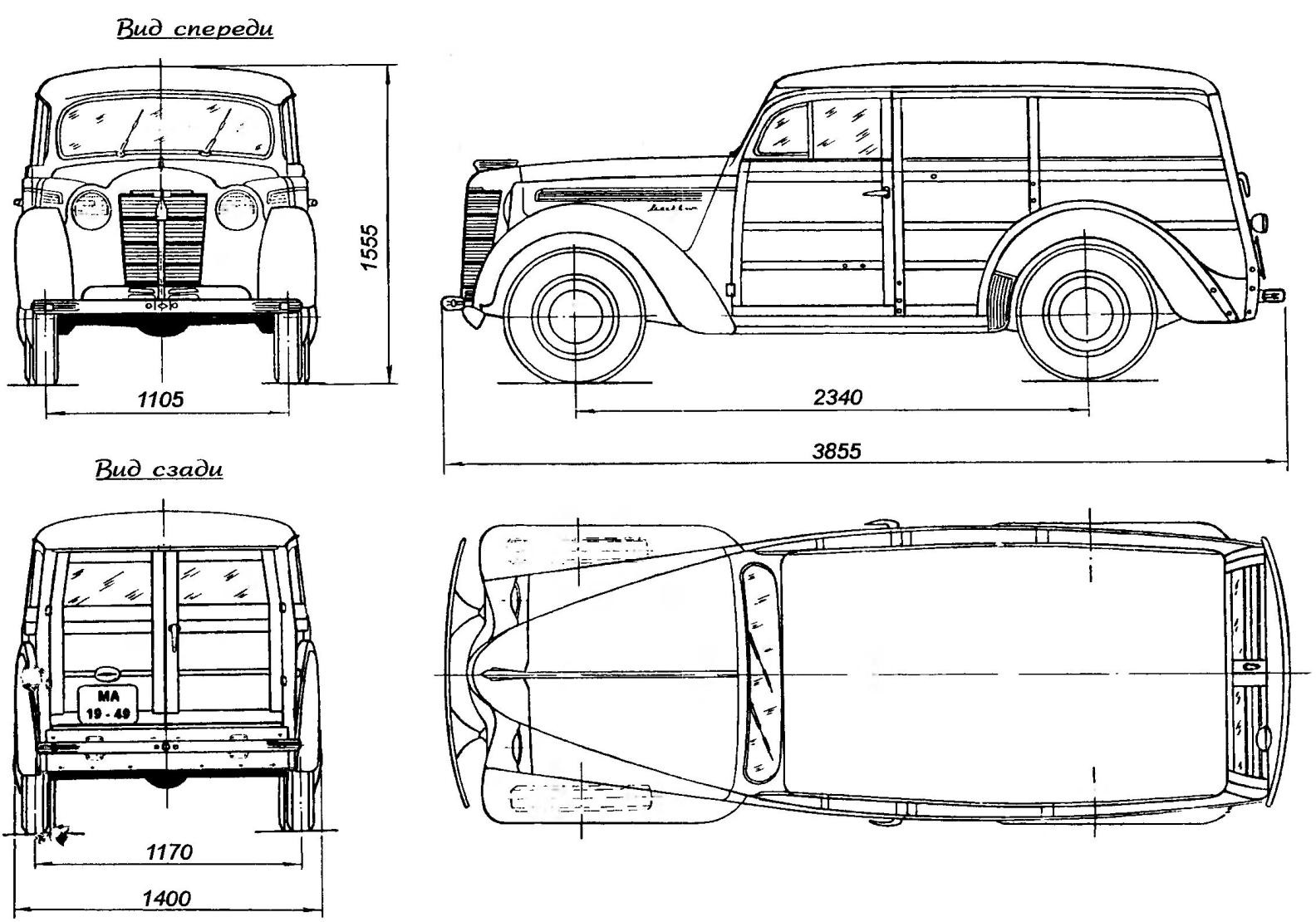 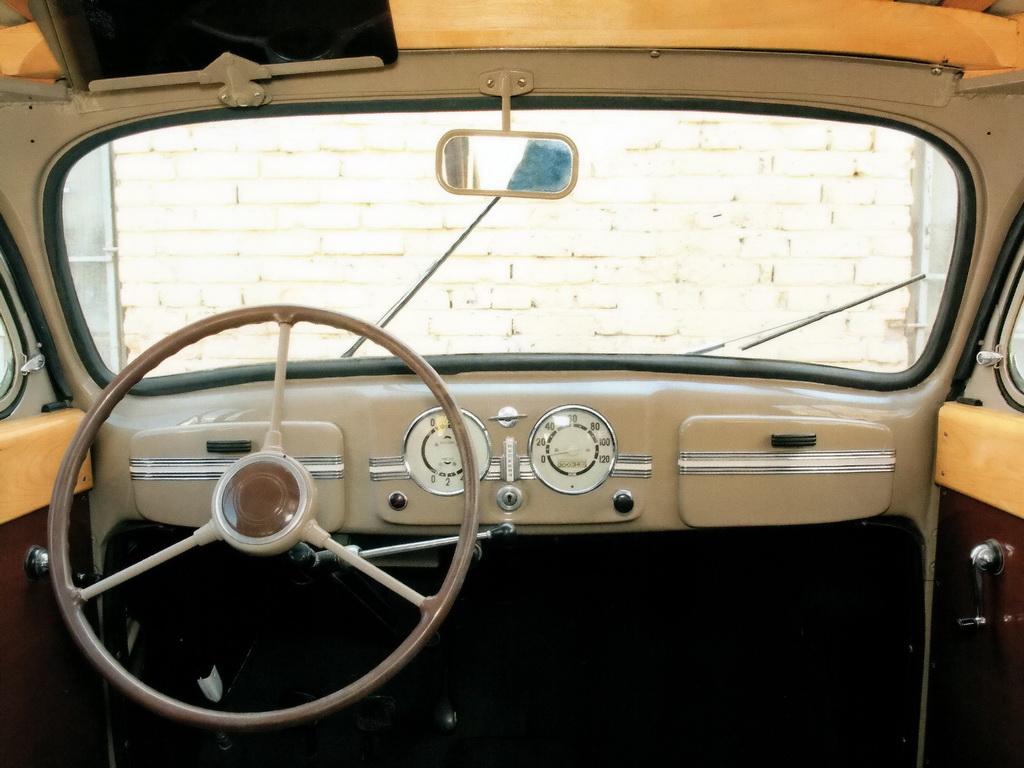 “Moskvich-422”: the driver
It should be noted that cars with wooden bodies have enjoyed a steady popularity in the West, forming a very characteristic group of vans-wagons — Americans affectionately call them woody “wood.” However, in our country, the launch of serial production of “Moskvich” with wooden box body was caused not by Western fashion, and a desire to reduce the metal content of the car — in the early postwar years of steel products in our country are not enough and more serious objects.
On MZMA worked from two versions of the car with wooden body: five-door wagon and three-door cargo van. However, the results of the tests of these machines from the five-door version has been abandoned, and the series went to a three-door version.
Assembly of vans, called the “Moskvich-422”, began in 1949. To the production of wooden bodies hooked up an aircraft factory in Fili — aircraft manufacturers have a huge experience of creating designs out of wood. The frame of the van was going from the birch — blanks for him did Shumerlinskiy plant izgotavlivaem butts for PCA machines. Parts of complex shapes milled by copy milling machines. The frame was assembled using a sheet connections of high loaded and critical components strengthened steel gussets. The paneling of side walls and doors made from moisture-resistant (bakelizirovannoj) aircraft plywood. The roof was a light wooden frame covered avtobysom or granitol — materials reminiscent of the upholstery. The cars also gathered in Fili, where its course diagonalis with MZMA so-called platform of the car without a roof and sidewalls.
In private hands, the vans did not almost appear. Machines were supplied to companies of the Ministry of communications for transportation of mail. In such vehicles transporting containers with 15-penny-mi coins for pay phones, and small batches of products for restaurants and cafes.
In 1954, the “Moskvich-400” was upgraded, the car received a more powerful Nizhnekamsky 26-HP engine with three-speed transmission with synchronizers on second and third gears, and handle the transmission shift moved from the floor to the steering column. This option has received the name of “Moskvich-401”. On the basis of the new modifications was also produced in sedan, convertible and wood wagon. During the period from 1949 to 1956 on the basis of cars “Moskvich-400 and Moskvich-401” was released more than 11,000 wooden vans.
Very popular in the southern regions of our country used modification with a body of type “cabriolet”, which bore the name of “Moskvich-420А”. To maintain the rigidity of the body, deprived of the roof bars of the upper perimeter of the doors were reinforced, the design introduced the diagonal braces from the bottom of the rear floor and amplifiers in the upper part of the front pillar and a number of other places. The parameters, the convertible is virtually identical to the sedan. Just MZMA released 17 742.
In 1949, it has produced a pilot batch of cars “Moskvich-403Э-424Э” with a streamlined body, which had new wall panels and hood of the alligator type. The gear lever this car was located on the steering column, and the spare wheel moved to the trunk. The main body shell and components, the chassis remained the same as the “Moskvich-400”, which gave the opportunity to move painlessly to the new model without stopping the production. Was supposed to run the machine with two different motors: ninclan 26-strong with an index of “401” or OHV, aluminum head, with index “403Э” 33 HP engine “403Э” this machine speeds up to 110 km/h.
To the design of fundamentally new body for a subcompact model 1935 MZMA began in November 1950. As the prototype was again selected English Ford Prefect, of course, the postwar years of production. Experienced the car has received the name “Moskvich” index 402, was ready in the summer of 1951. In February 1955, the car passed state tests and in 1956 was initiated. The machine was equipped with new of 1.22-liter engine capacity of 35 HP, capable of accelerating the car to a speed of 115 km/h. the number of versions “402-go” was also delivery vans and station wagons. Well, the family car “400-401” long being on the road, modestly bearing the title of the first Soviet mass car.
Specifications baby car “Moskvich-400”
Length, mm………………………………… 3855
Width, mm……………………………… 1400
Height, mm………………………………. 1545
Base, mm…………………………………… 2340
Track, mm:
the front wheels………………………….1105
the rear wheels………………………………1170
Ground clearance, mm………………..190
Minimum turning radius, mm…. 6000
Curb weight, kg………………..855
Maximum speed, km/h………..90
Fuel consumption, l/100 km………………..9
Motor power, l .with……………….23
Rotation frequency, Rev/min………… 4000
Working volume, cm3………………….. 1070
Compression………………………….6.27
Tires…………………………………….5,0—16
Fuel tank capacity, l…………..31
I. EVSTRATOV