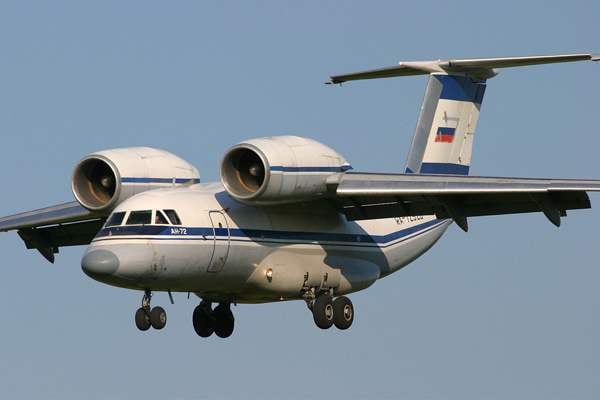 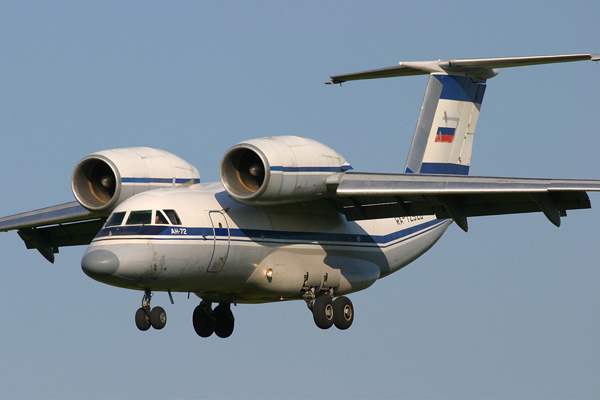 The aircraft short takeoff and landing An-72 was created to solve special military problems. To increase the lift coefficient of the wing engines located on its upper surface. However, their gas jets blown part of the airfoil and flaps, using the Coanda effect. An-72 is equipped with two turbofan engines D-36 takeoff thrust of 6500 kgf.
The aircraft can carry in a sealed compartment of the fuselage of bulky cargo and self-propelled machinery, including cars GAZ-66 and UAZ-469, aircraft engines, standard containers and goods on pallets. The vertical tail is not only large area, but two-wheel turn, providing the required reserves limit of controllability at low speeds.
The first flight of the An-72 was held on 31 August 1977 In the process of testing the plane has undergone several changes. In particular, increased wingspan and wing area increased fuselage length. The bottom flap of the cargo hatch made rolled back under the fuselage, changed the design of the nozzle portion of the engine hood and they installed the flaps of the thrust reverser. In this form An-72 was launched into serial production. The An-72 is set 20 world records in different weight categories, many of which have not been surpassed to this day.
On the basis of the An-72 subsequently created aircraft: long-range radar detection EN-71, patrol An-72П for border guards and the repeater, and a whole family of mini civil-aircraft An-74. Built just over 90 aircraft An-72.
Engines D-36. The wingspan is of 31.89 m and its area is 98,78 m2. Length—28,068 m Parking height is 8.65 m. the Maximum takeoff weight of 31 200 kg. the landing Mass of the load— 7500 kg Maximum fuel—16 of 250 HP cruising Speed 600 km/h service ceiling—10 700 m. Maximum flight range (with navigation fuel capacity 580 kg) 4320 km. Run-up/run—800/450 m. the Crew of 4—5 people.