In the previous issue of “Modeller-designer” followers of aeromodelling was able to gather information about competition rules and guidelines in the new are gaining wider appreciation, direction of technical work — the electrics. I hope that no less favor in entering new theme will bring and a brief description of a few specific successful models that can serve as a kind of “reference point” in the design of this promising technique will become a basis of creation of similar machines. Moreover, the presented model of precisely those classes that are cultivated at present in our country.
Figure 1 shows the basic geometry elektroleta class F5B/7 designed and successfully tested by the author of the previous material — Sergey Sobakin from the city of Dubna in Moscow oblast. The fuselage of the model presented the monocoque shell, moulded from fiberglass, carbon fabric, and SVM on the binder resin brand ED-20. The wing has a standard case design, made mostly of balsa (spars shelves — pine). Structurally, the stabilizer is similar to the wing. Plating of bearing surfaces — adhesive thermoplastic film Solarfilm or RSA-cover.
The model is equipped with a Speed 600 motor/19VV slow-wave gear with gear ratio of 2.5:1, and the folding propeller with a diameter of 300 mm by 250 mm. powered by Blon battery of seven items Sanyo 1400 SCR. Controller “225 pounds” company “Robbe” (or JES-50 firm JETI) is performed not only by switching power to the motor, but the washing side of the radio control system model (by the way is the abbreviation for WEIGHT in the name of the controller indicates the presence of an opportunity just like this to avoid the installation of extra power supplies). Used radio “Futaba”, and used only three channels of control — two for surveylink rudders and one for the controller. All up weight is 1320, 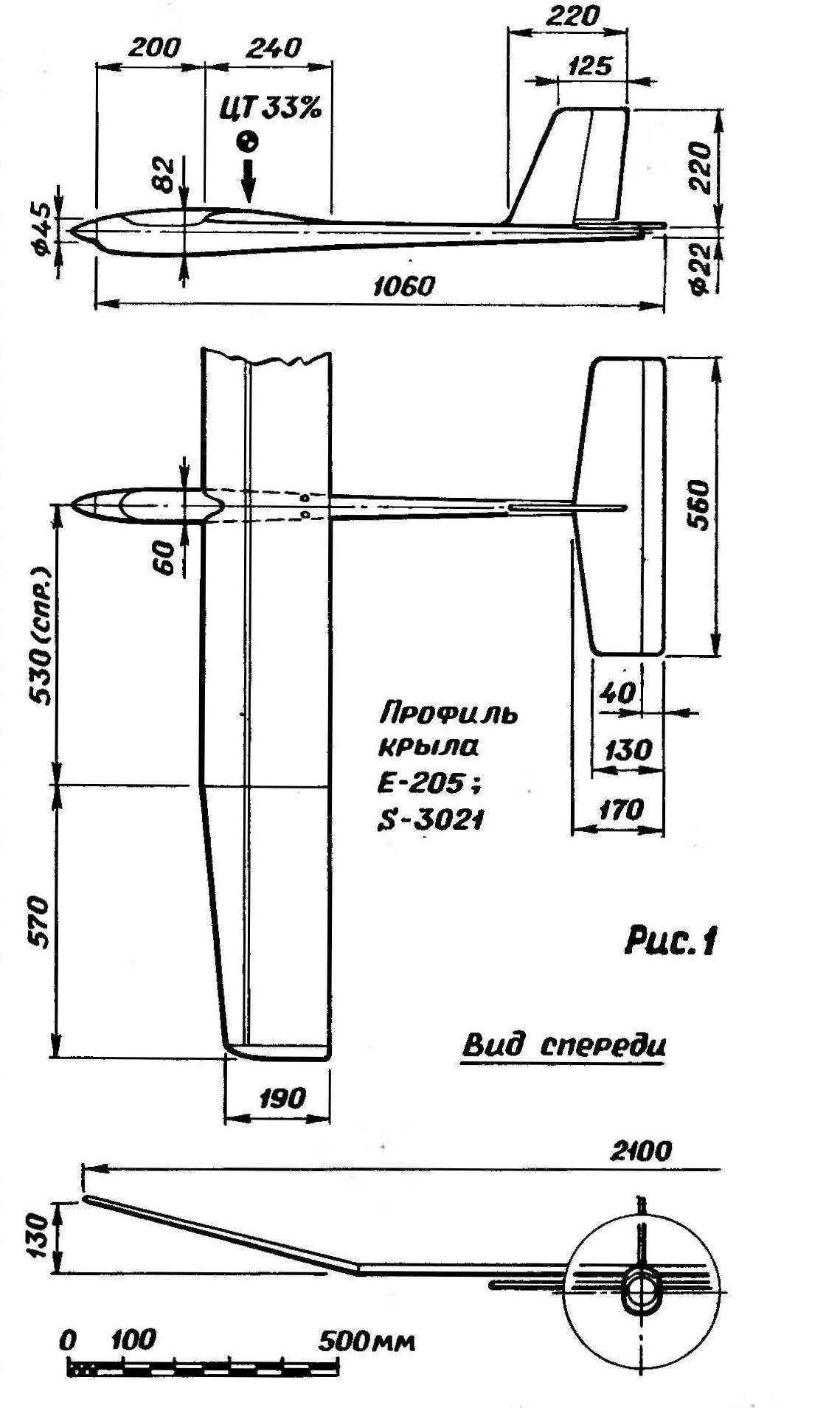 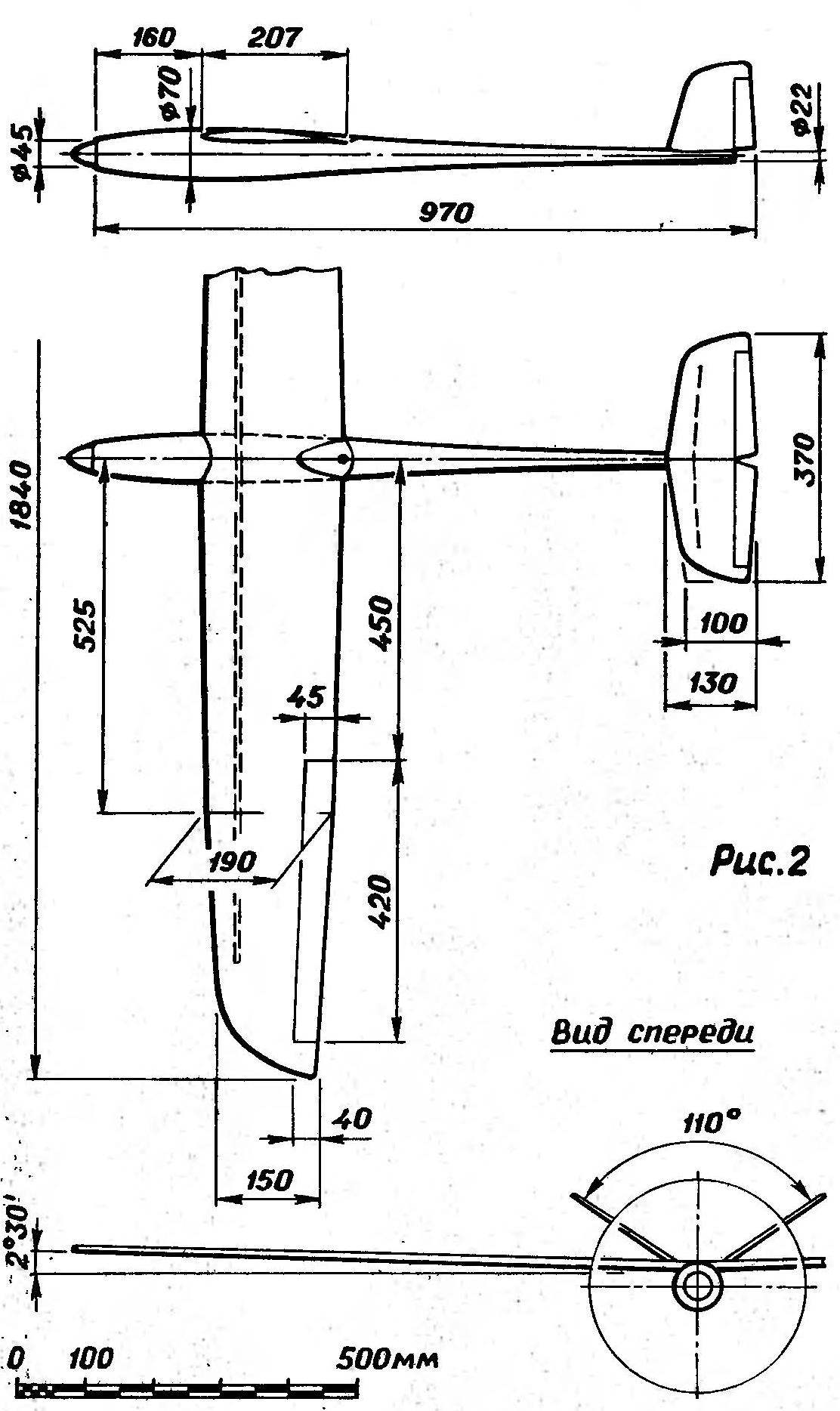 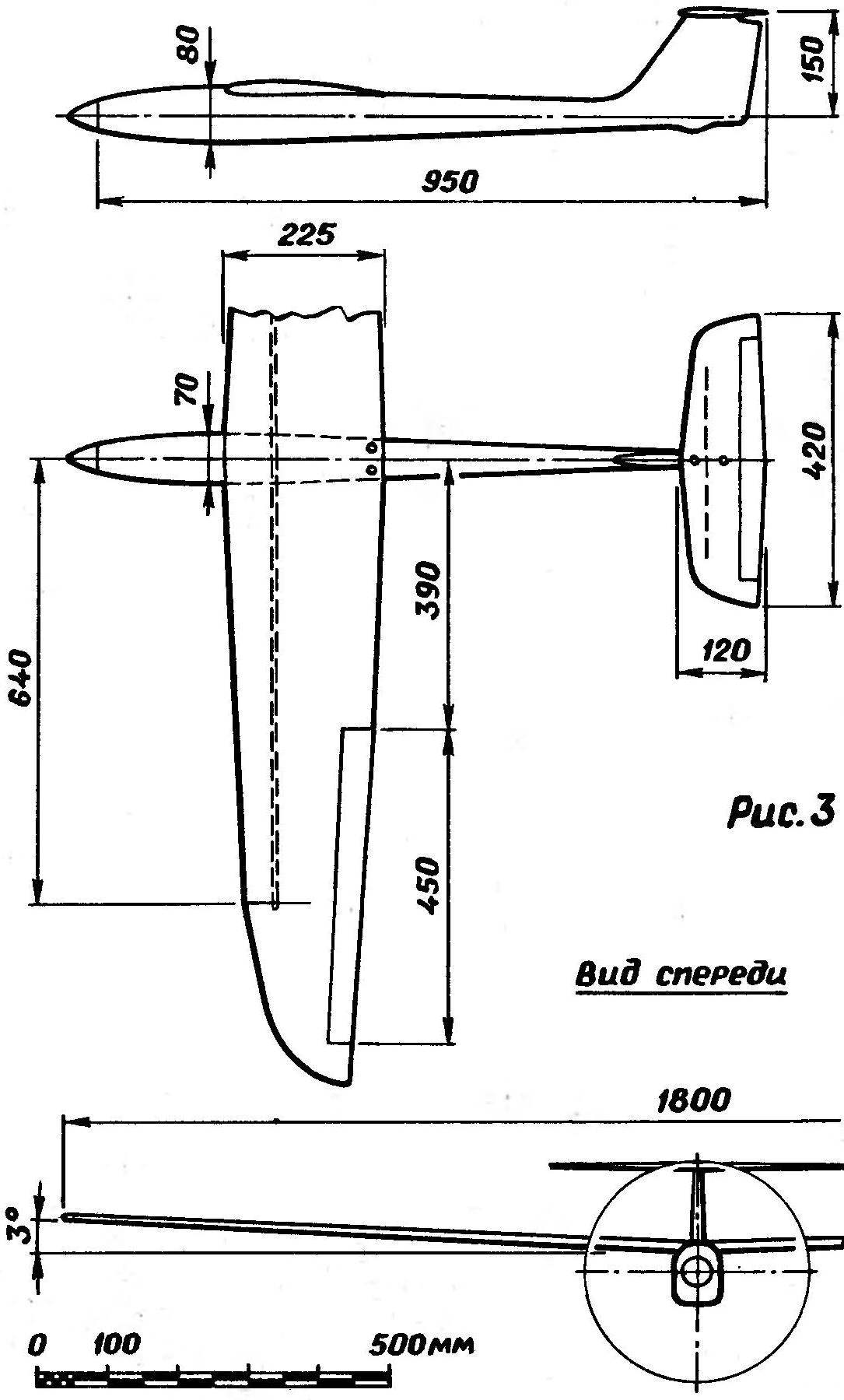 Fig.3.
Figure 2 gives an idea about the elektroleta class F5B F5B or FAJ/FAJ 10, created by an engineer by S. Sobakin jointly by S. Iachini. The wing area of this unit is the accounting period by 33.55 DM 2 airfoil RG-15мод. Stabilizer with an area of 4,13, DM 2 has a profile NACA 0007. By construction, both(represented by the fiberglass skins with a core of balsa or foam type “Rohacell” and reinforcement elements made of CFRP and SVM-plastic) and carbon-fiber spars. Shaping panels power skin is in a negative matrix at pressures up to 1 ATM epoxy resin L 285 brand. The fuselage is molded from compositions of the glass-coal-SVM also negative in the matrix, but at a pressure of 10 ATM.
For speeches in class Р5В/10 RA) model can be fitted with electric motors “Keller 70/4”, “536/3” company “Robbe” or “Plettenberg 320/40/3”. Air two-bladed folding propeller has a diameter of 320 mm with a step from 205 to 215 mm. Applied to the fairing of the propeller (spinner), “Turbo”, which allows to intensify the cooling of the power motor by dodaci air flow along the axis of the screw. Power battery pack represented by the Assembly of the elements of the brand “Sanyo” 1700 SCRC. Controller type JES-150 (dial-up tone of up to 150 A) or RSC-890 (current up to 90 A). Used radio control “Futaba” FC-18 V3. One servo type S-9601 is used for the traction drive of the Elevator, aflBeS-3101 — to drive the ailerons. Power on-Board equipment radio control — battery capacity 0.11 A-h with a total voltage of 4.8 V. the mass of the airframe is equal to 530 g with a flight 1830
Figure 3 shows electrolet, built by the famous professional athletes from the Czech Republic engineers J. Stancom and Vitka. The model, which they called “Spirg”, has a wing area of 33.5 DM 2 with profiling of a type “RG-15/8,5 and the stabilizer area 4,3 DM 2 airfoil NACA 0008. The mass of the Airframe model (without equipment) equal to 650 g. the Machine is designed for performances in classes F5B F5B and FAJ/10FAJ.
S. SOBAKIN, engineer